This article was originally published on 22 August 2018. Some image and footage credits were corrected on 31 August 2018.

NORWAY'S western coast is home to some of the most dramatic landscapes on earth.

Carved by glaciers throughout the ages, some of these fjords stretch for 200 kilometres inland and are over a kilometre deep.

The current convoluted travel route through and around this terrain takes you along Norway’s 1,100 kilometre, 683 mile, E39 highway - a road with a total journey time of 21 hours.

Now, the Norwegian government are working to improve access to services and residential and labour markets across the country’s western regions by embarking on the largest infrastructure project in the nation’s history.

The E39 runs between, Kristiansand in the far south of the country and Trondheim in the north. The route navigates its way across the fjord network and features no fewer than seven ferry crossings. 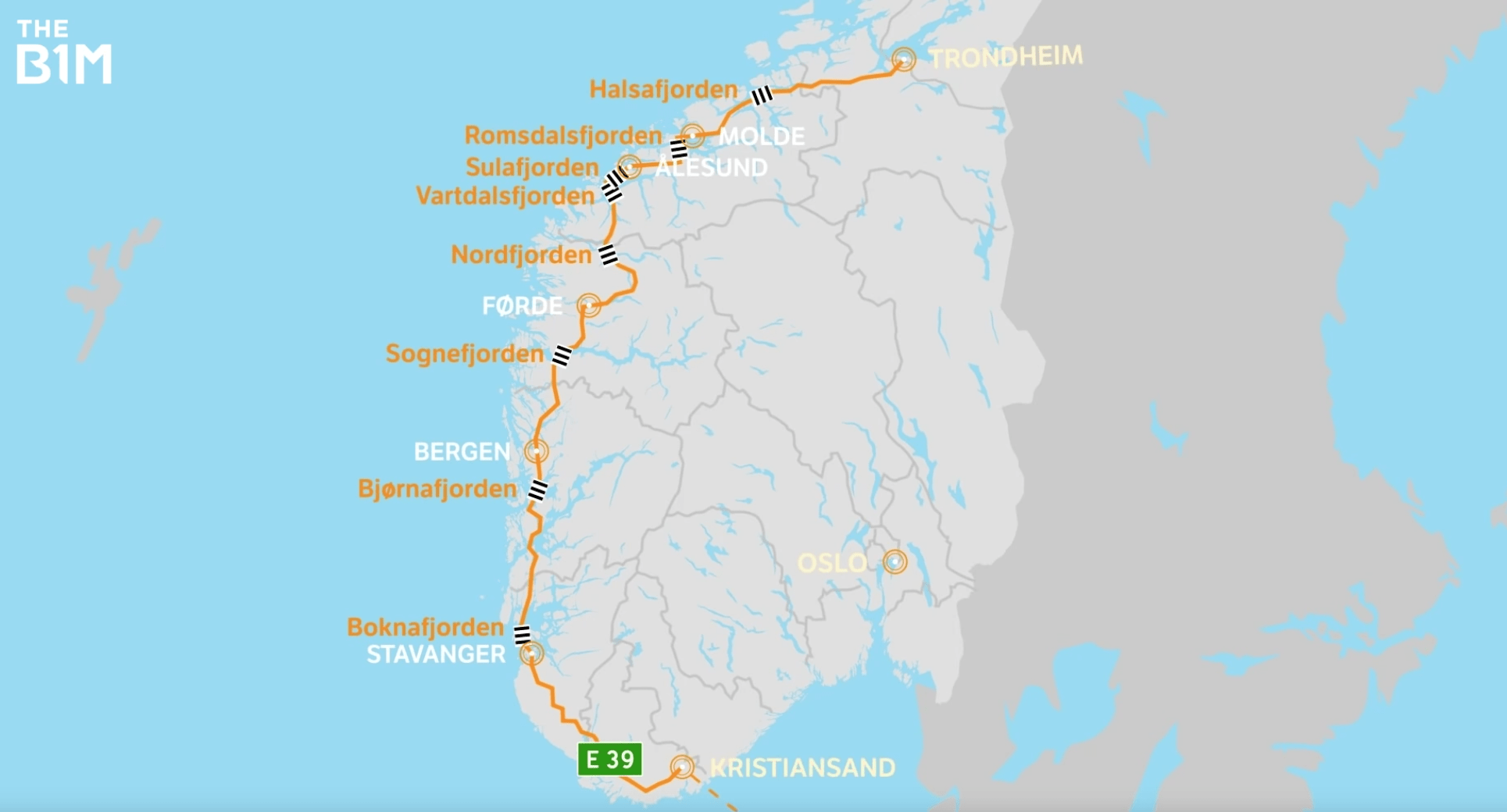 Above: Norway is proposing to remove all ferry crossings on the E39 highway in order to better connect the region. Image courtesy of the Norwegian Public Roads  Administration, Vianova PT A/S and Baezeni Co., Ltd.

The new coastal highway project aims to eliminate the need for ferry services altogether by building a series of bridges and tunnels across, through and under the landscape.

With many of the fjords along the route being too wide or too deep for conventional infrastructure to cross, innovative new solutions are being investigated by the Norwegian Public Roads Administration.

Rogfast is the first in a series of crossings that will link the E39, connecting Stavanger and Haugesund via a 27 kilometre, 16 mile under sea tunnel. 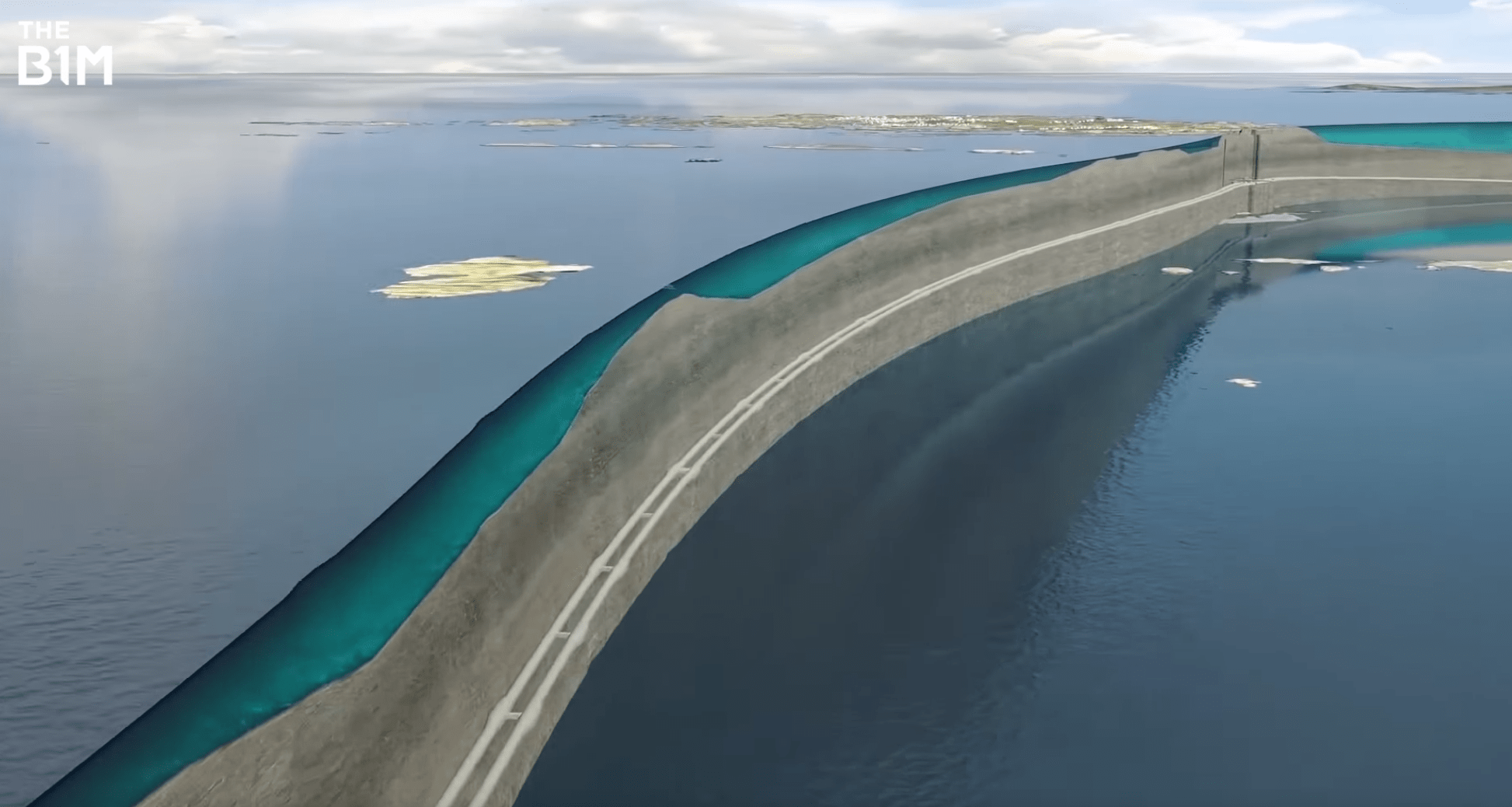 Above: Rogfast will be the longest undersea road tunnel in the world. Image courtesy of the Norwegian Public Roads  Administration, Norconsult A/S and Baezeni Co., Ltd.

This structure will reach depths of up to 390 metres below sea level, making it the deepest as well as the longest undersea road tunnel in the world.

The Rogfast project will in fact consist of two tunnels connected every 250 metres with emergency exits. Each tunnel will have a lay-by at 500 metre intervals, along with telephone and surveillance cameras along the route.

The tunnel will also feature a mid-route intersection with the island municipality of Kvitsøy creating an undersea tunnel junction and connecting the island with the Norwegian mainland. 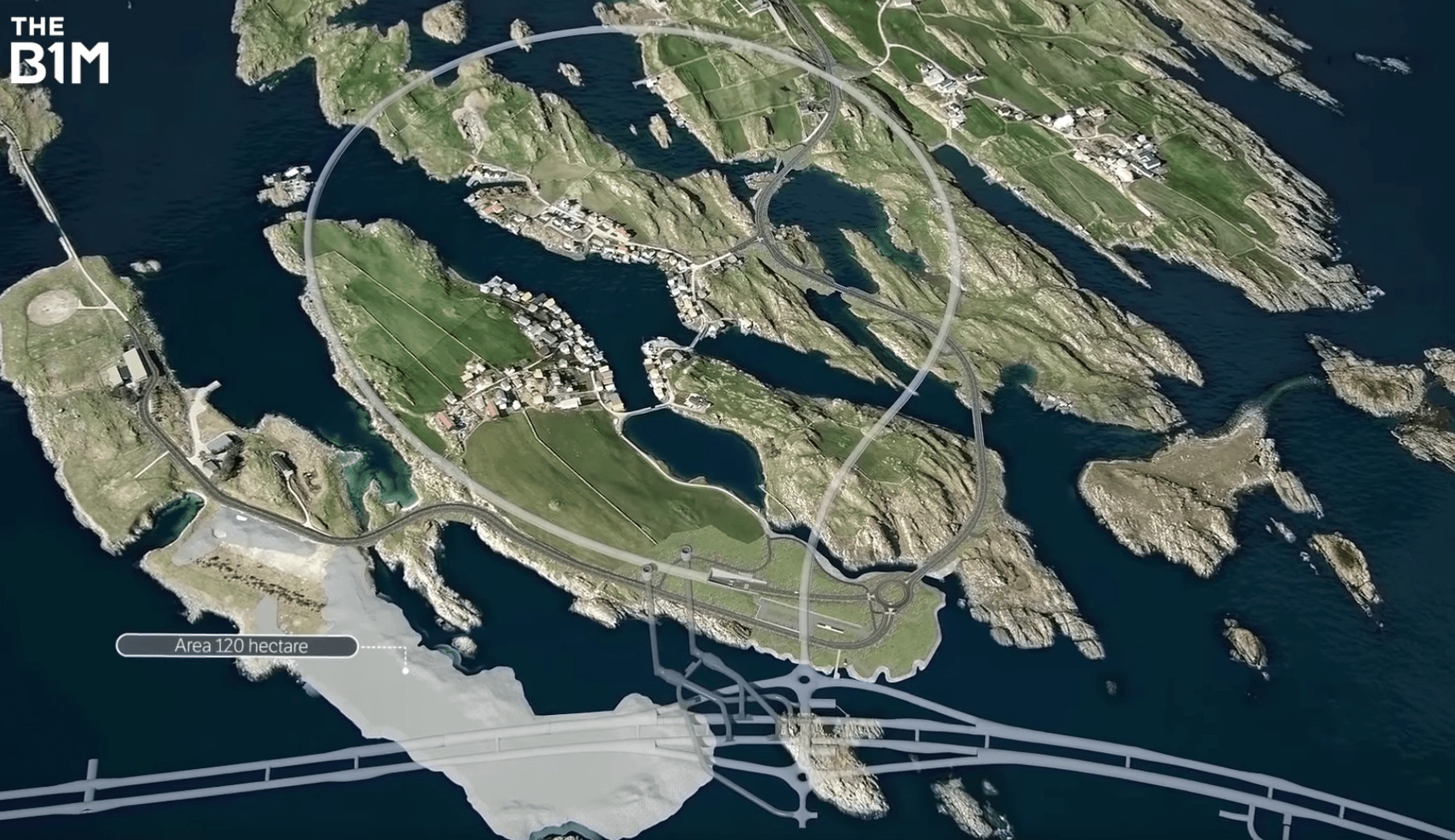 Above: An undersea junction will connect the island of Kvitsøy to the mainland for for the first time. Image courtesy of the Norwegian Public Roads Administration, Norconsult A/S and Baezeni Co., Ltd.

While the Rogfast works are already underway, the scale of some other fjords is presenting the project team with extreme engineering challenges.

Bjornafjord - located to the south of Bergen - stands 5 kilometres wide, and reaches depths of 600 metres. 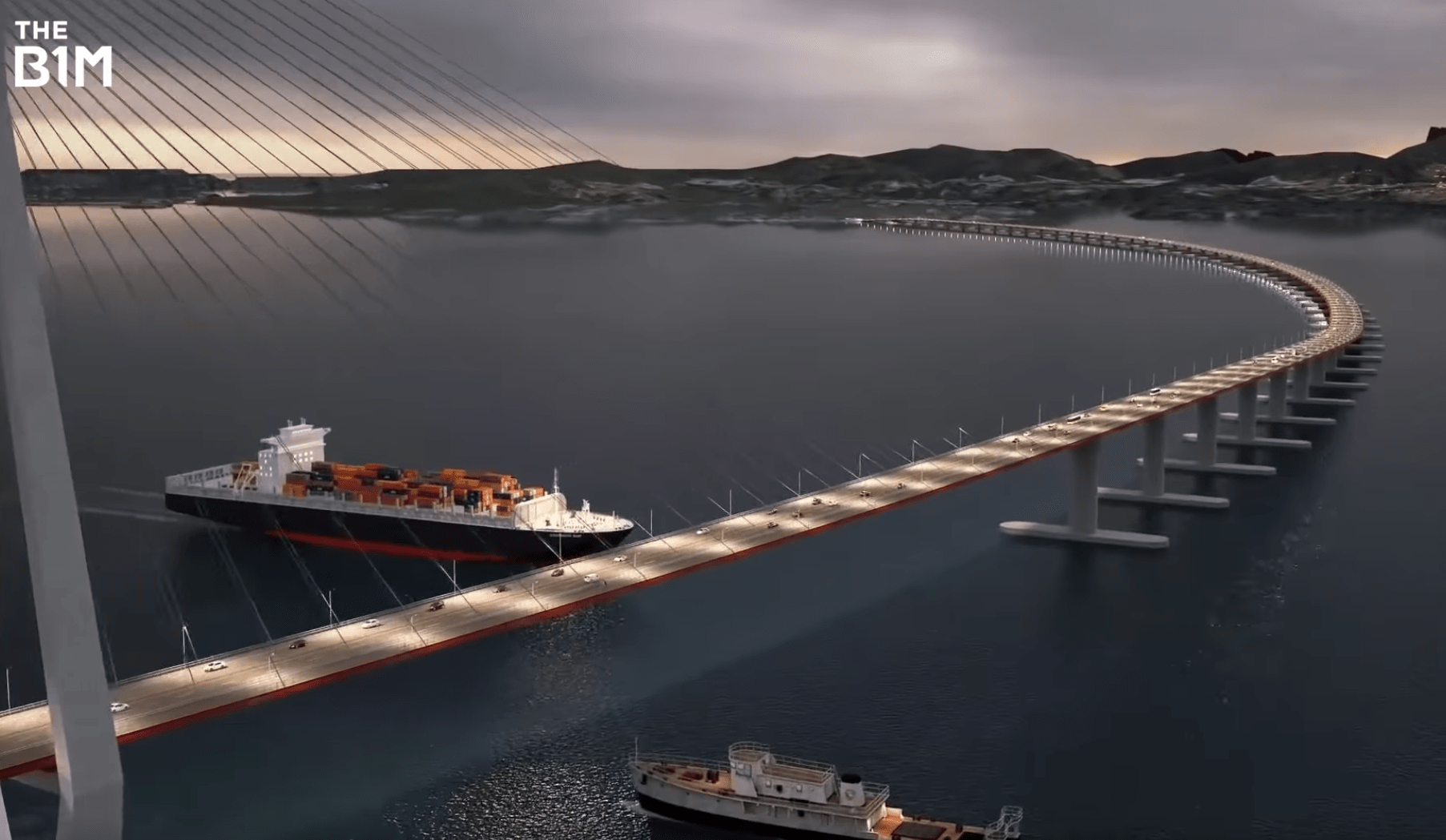 Above: A floating bridge has been proposed to cross the Bjornafjord. Image courtesy of the Norwegian Public Roads Administration, Vianova PT A/S and Baezeni Co., Ltd.

To cross this challenging stretch of water, a proposal has been put forward for a floating bridge, anchored to the shore at both ends.

The first is for a three tower suspension bridge, with two of the bridges’ towers anchored on land and the third central tower anchored to the seafloor, some 400 metres below the water line. 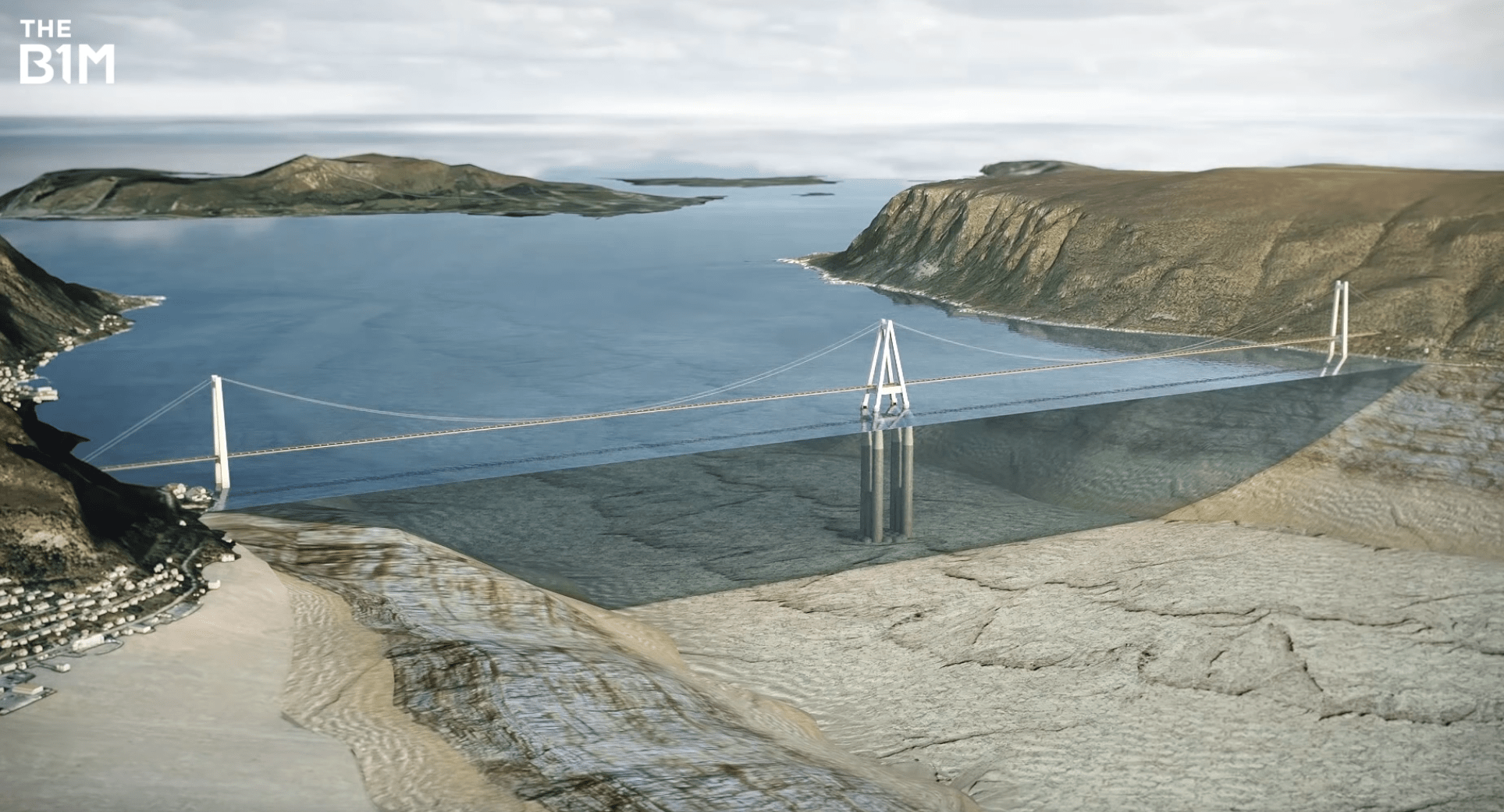 Above and Below: The Sulafjord could be crossed by a three tower suspension bridge or by a floating tunnel tethered to the seafloor. Images courtesy of the Norwegian Public Roads Administration, Vianova PT A/S and Baezeni Co., Ltd. 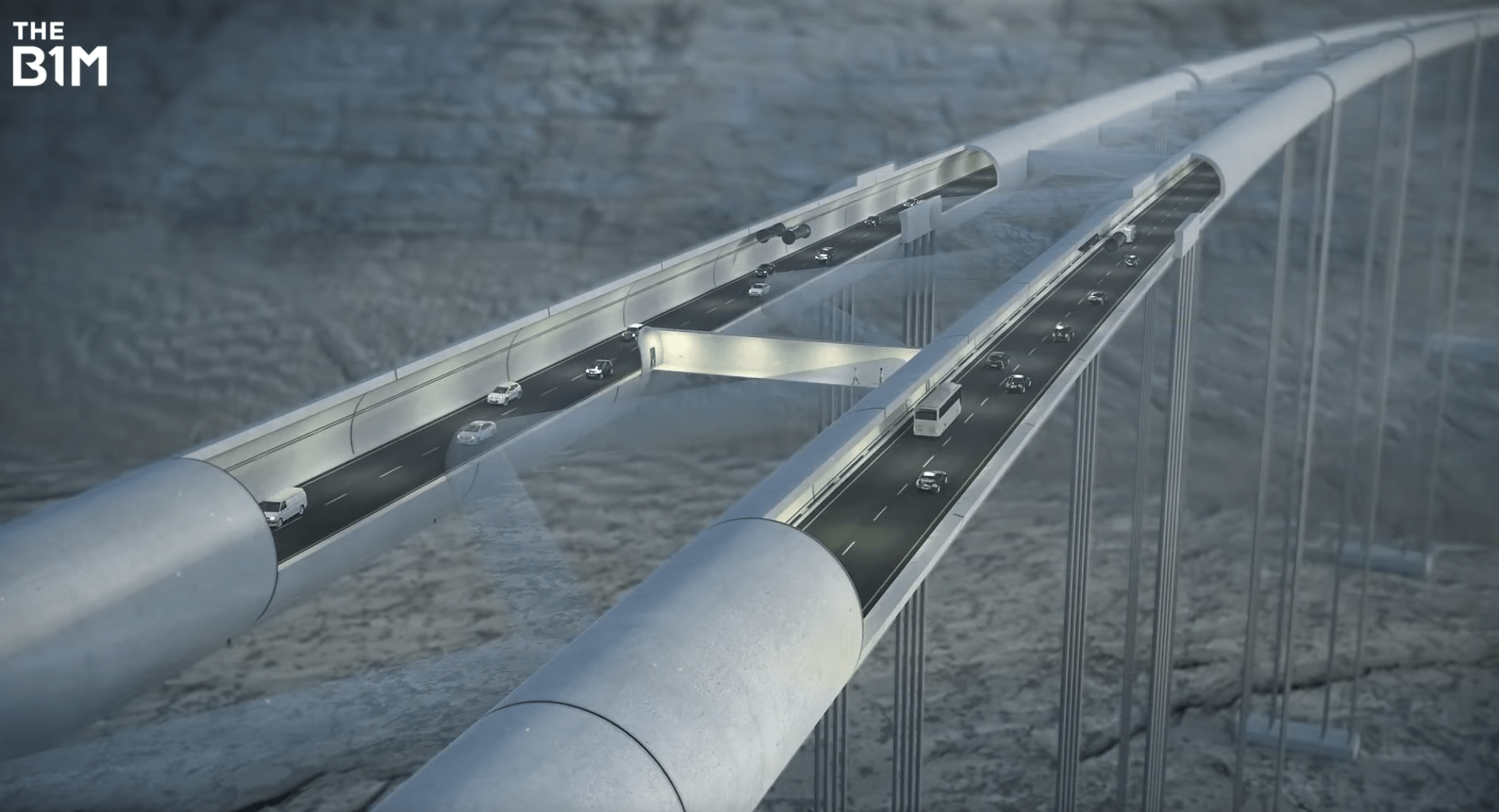 An alternative proposal for a “submerged floating tunnel” would see two interconnected tubes running side by side tethered to the seabed using high strength cables.

Crossing the Romsdalsfjord will require a 16 kilometre undersea tunnel, much like the Rogfast project, from Alesund to Midsund - followed by a 2 kilometre suspension bridge connecting onto Molde.

By far the most complex and ambitious of all of the coastal highway crossings is that at Sognefjord - also known as the “King of the Fjords”.

Norway's largest and deepest fjord is over 3.7 kilometres wide and an incredible 1.3 kilometres deep at its lowest point.

While these extreme distances pose their own challenges, engineers must also account for the high number of ships that enter the fjord on a regular basis.

To deliver this, the project team are considering numerous different types of crossing for this fjord. 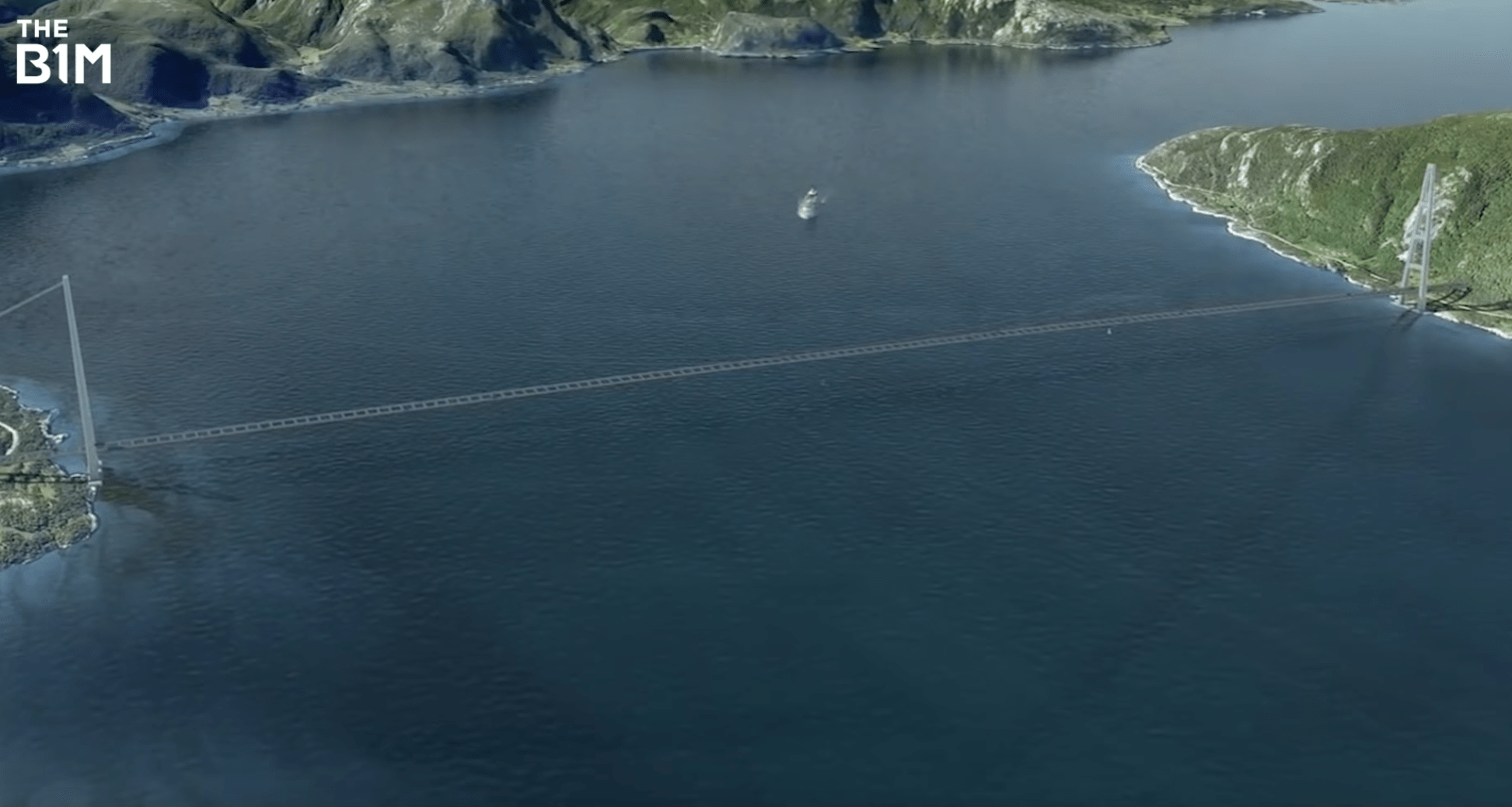 Above: A suspension bridge crossing the Sognefjord would be a true record breaker, double the length of the world's current longest bridge. Image courtesy of the Norwegian Public Roads Administration, Vianova PT A/S and Baezeni Co., Ltd.

The first is a traditional suspension bridge. With a 3,700 metre crossing, such a structure would be almost double the length of the world’s current longest bridge and would require support towers at least 450 metres tall, significantly eclipsing the 343m tall Millau Viaduct in France to become the world’s tallest bridge structure.

A floating bridge is also being considered. However, this structure would need to raise to allow ships to pass and achieving such a feature in a bridge that is only anchored to each shoreline poses considerable engineering challenges that are yet to be overcome. 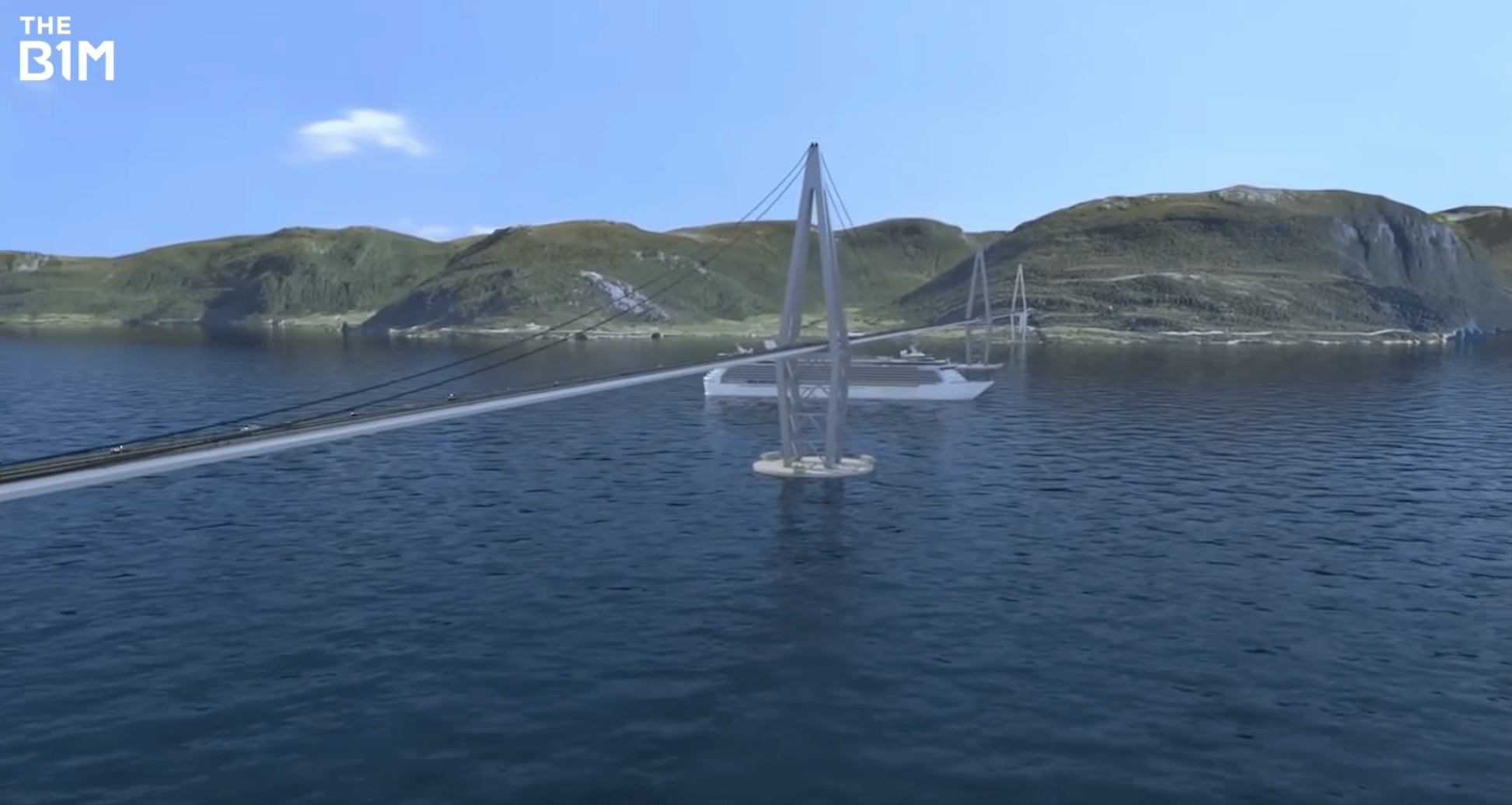 Above and Below: Floating bridges and suspended floating underwater tunnels are being considered to cross the Sognefjord. Image courtesy of the Norwegian Public Roads Administration, Vianova PT A/S and Baezeni Co., Ltd. 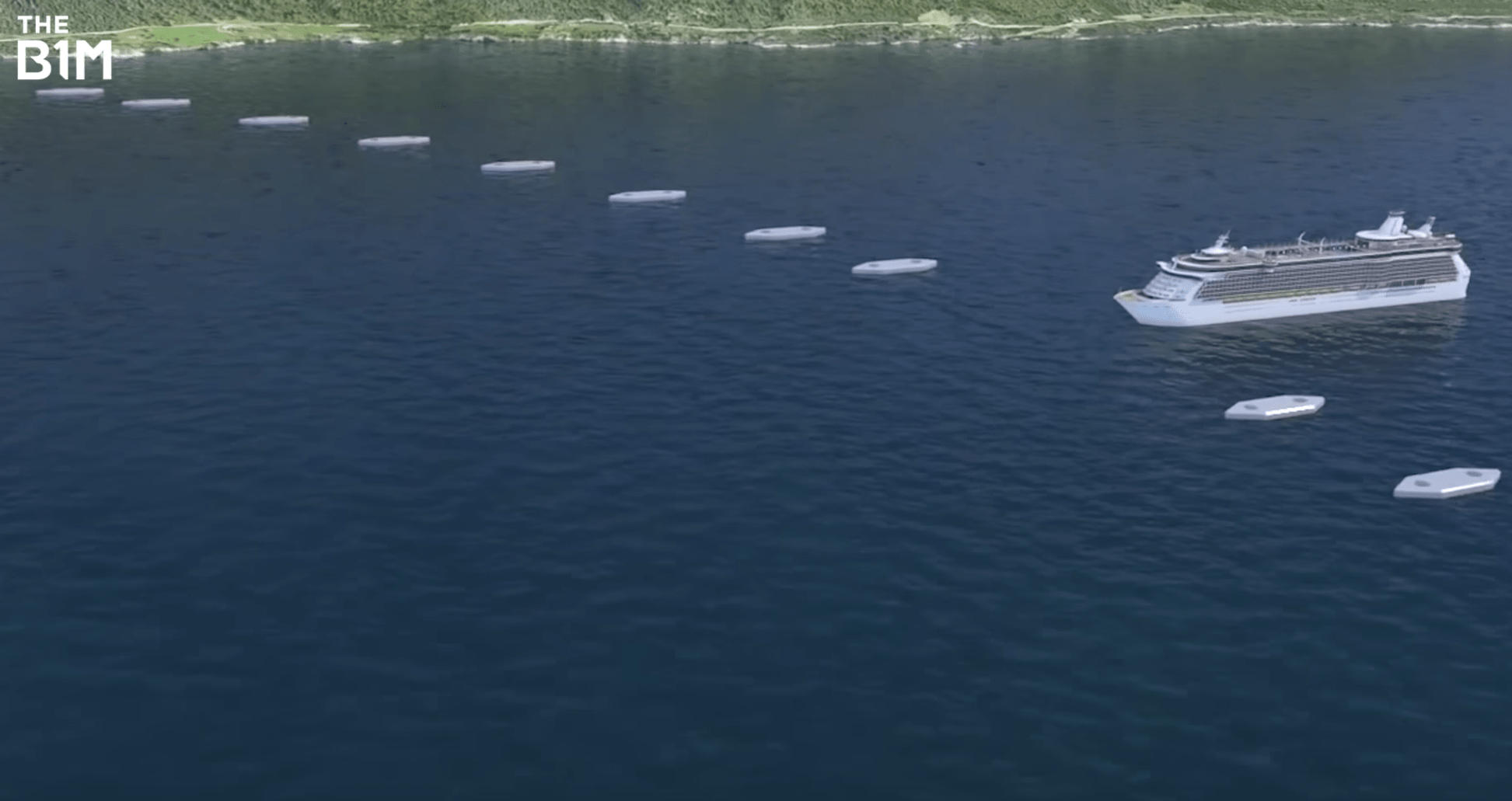 In a similar proposal to that found at Sulafjord, a submerged floating tunnel in also being considered.

This proposal would differ slightly to its counterpart due to the extreme depth of the Sognefjord. Rather than being tethered to the seabed, the tunnels would be suspended from floating pontoons that would allow ships to pass overhead.

A hybrid proposal is also being considered - combining a floating pontoon bridge with a portion of submerged floating tunnel that allows ships to pass overhead. 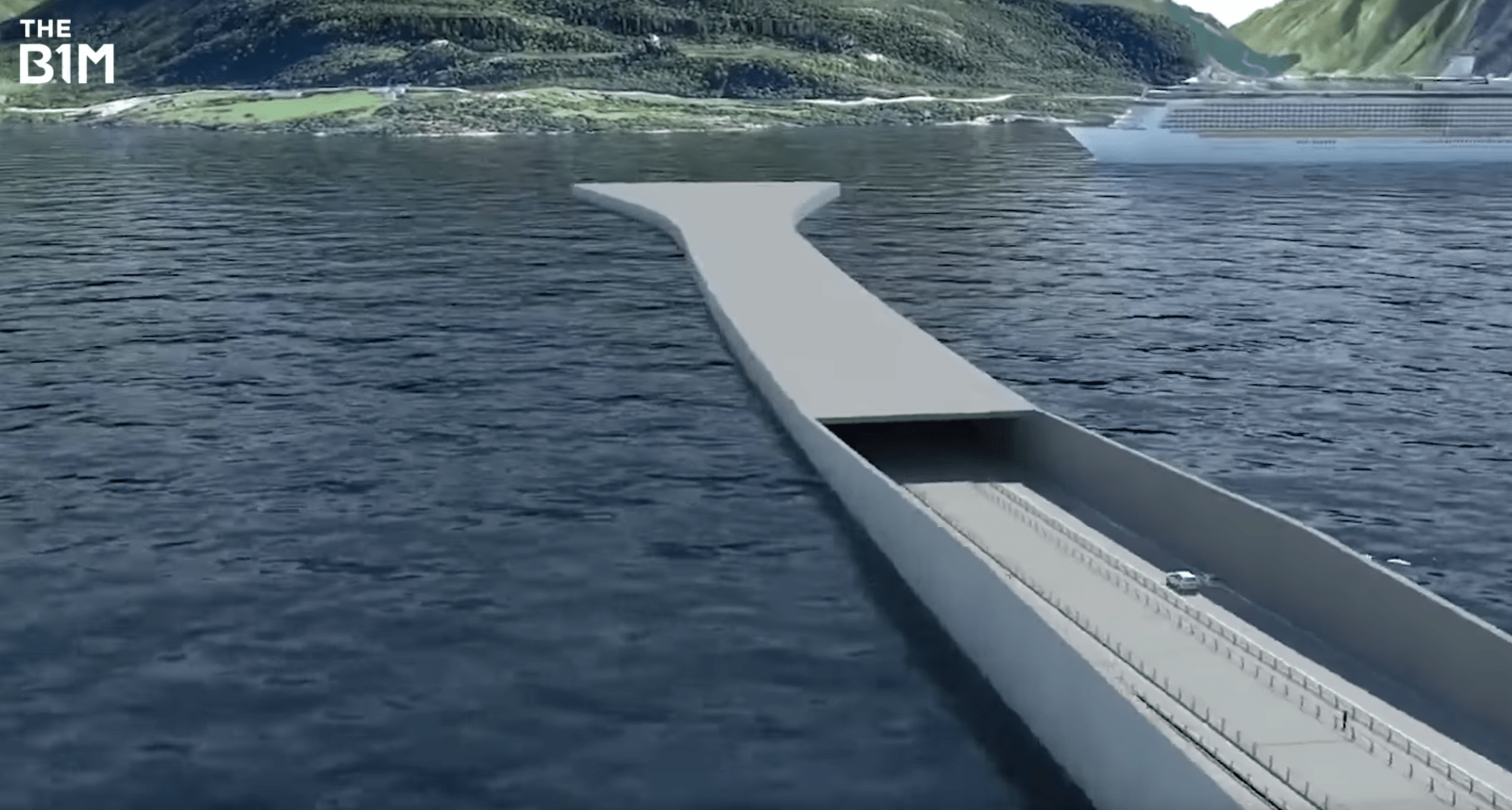 Above: In a world first, a hybrid floating bridge and a floating underwater tunnel structure could be used to cross the fjord. Image courtesy of the Norwegian Public Roads Administration, Vianova PT A/S and Baezeni Co., Ltd.

Whilst fixed bridges transferring into fixed tunnels is not an uncommon solution in waterways with high shipping traffic - such as the link between Denmark and Sweden and the extensive Hong Kong to Macau crossing - combining the two floating structures in this way would create the world's first example of such a solution. 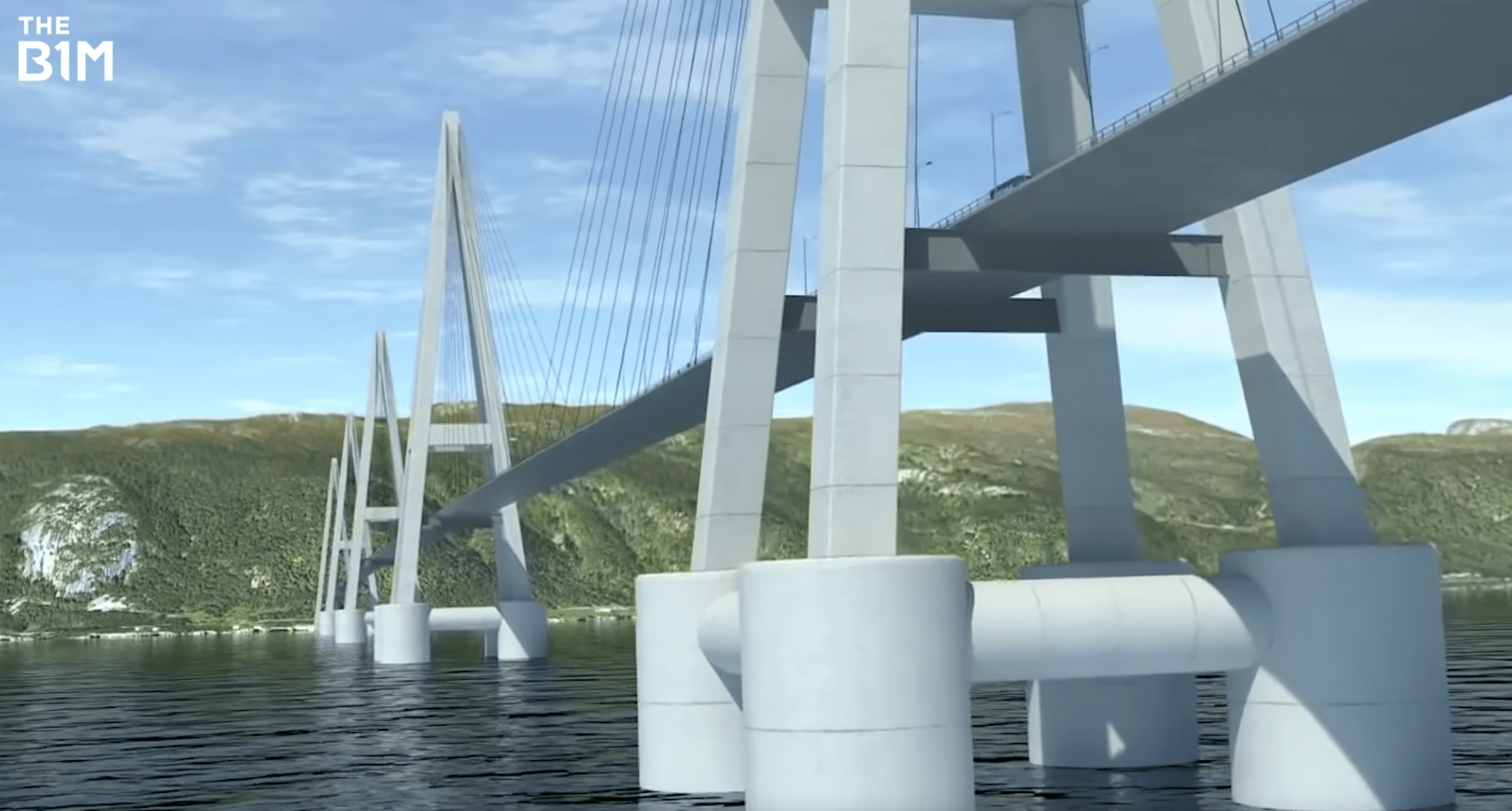 Above: A proposal tethering a floating bridge to the seabed, like an oil rig, could be used. Image courtesy of the Norwegian Public Roads  Administration, Vianova PT A/S and Baezeni Co., Ltd.

Finally, a proposal for a multi-span cable stayed bridge is under review. This structure would feature four floating pylons tethered to the sea floor rather like oil rigs.

With safety and environmental considerations being of the utmost importance, Norway’s vast coastal highway project is set to become a new benchmark in engineering capabilities and a model for future infrastructure projects around the world.