RISING dramatically above the Palace of Westminster - in the political heart of the UK’s capital - the Elizabeth Tower has witnessed some of the most significant moments in British history, standing as a symbol of resilience through two world wars to emerge as an enduring beacon of democracy.

While the tower is widely referred to as “Big Ben” this name actually refers to the clock’s main bell, which first marked the hour on the tower’s completion back in 1859. 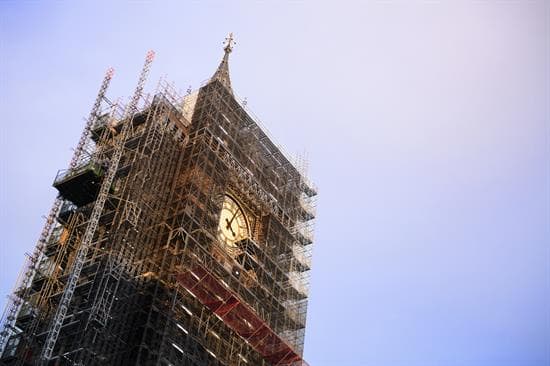 Above: The Elizabeth Tower has been undergoing a major restoration since 2017 (image courtesy of Jessica Taylor). Below: The B1M's Fred Mills on the scaffolding beneath one of the clock faces. 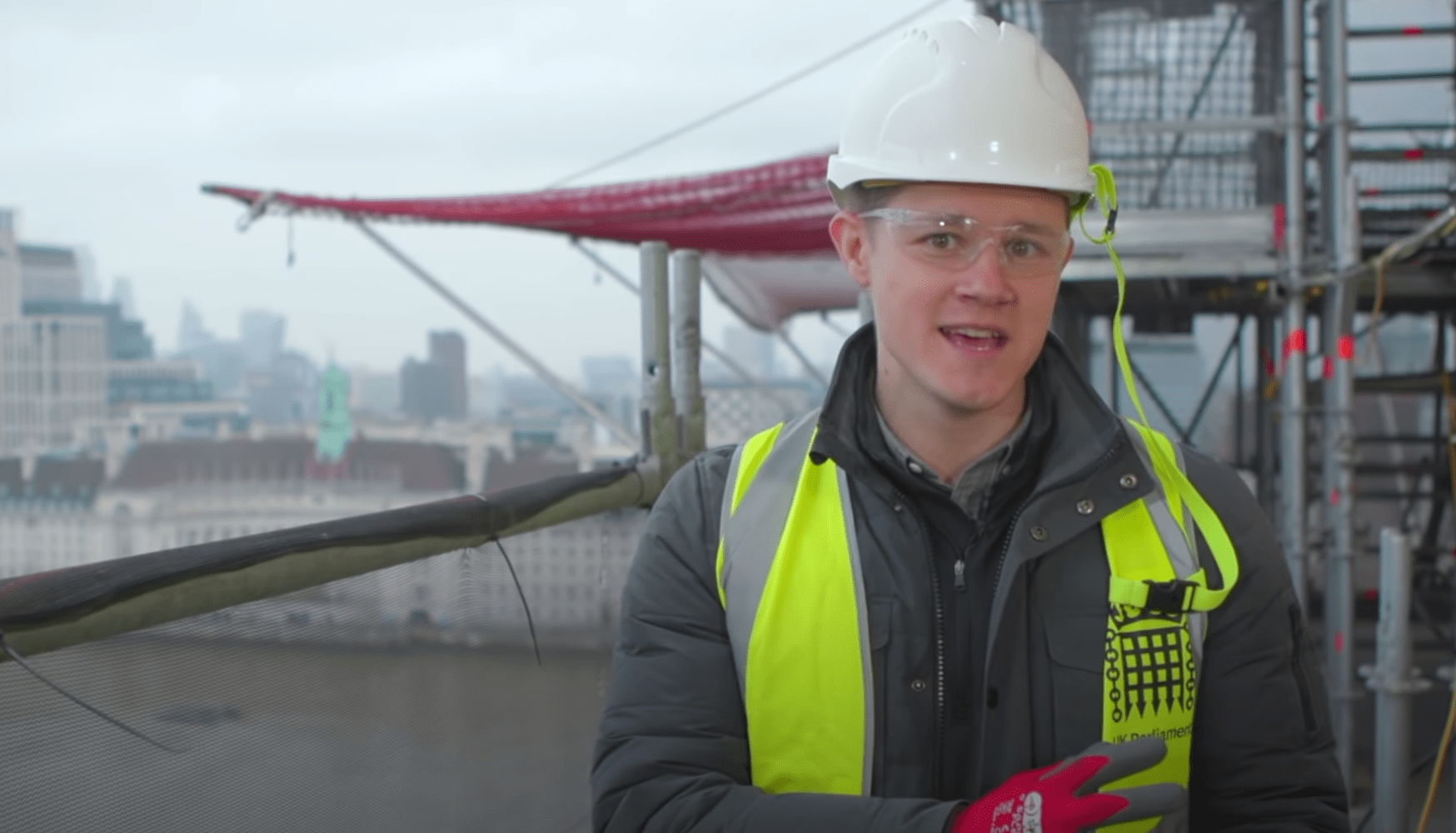 In the 160 years since - as London has evolved from the capital of the British Empire into one of the world’s leading financial centres - the tower has been subject to weathering, pollution and wartime bomb damage.

With its bells silenced to avoid deafening workers and only ringing to mark Remembrance Day and New Year, the entire tower was first enclosed in scaffolding; a careful process that took six months to complete.

The 3,433 iron roof tiles and much of the decorative detailing at the top of the tower was then removed and taken off-site for hand restoration. 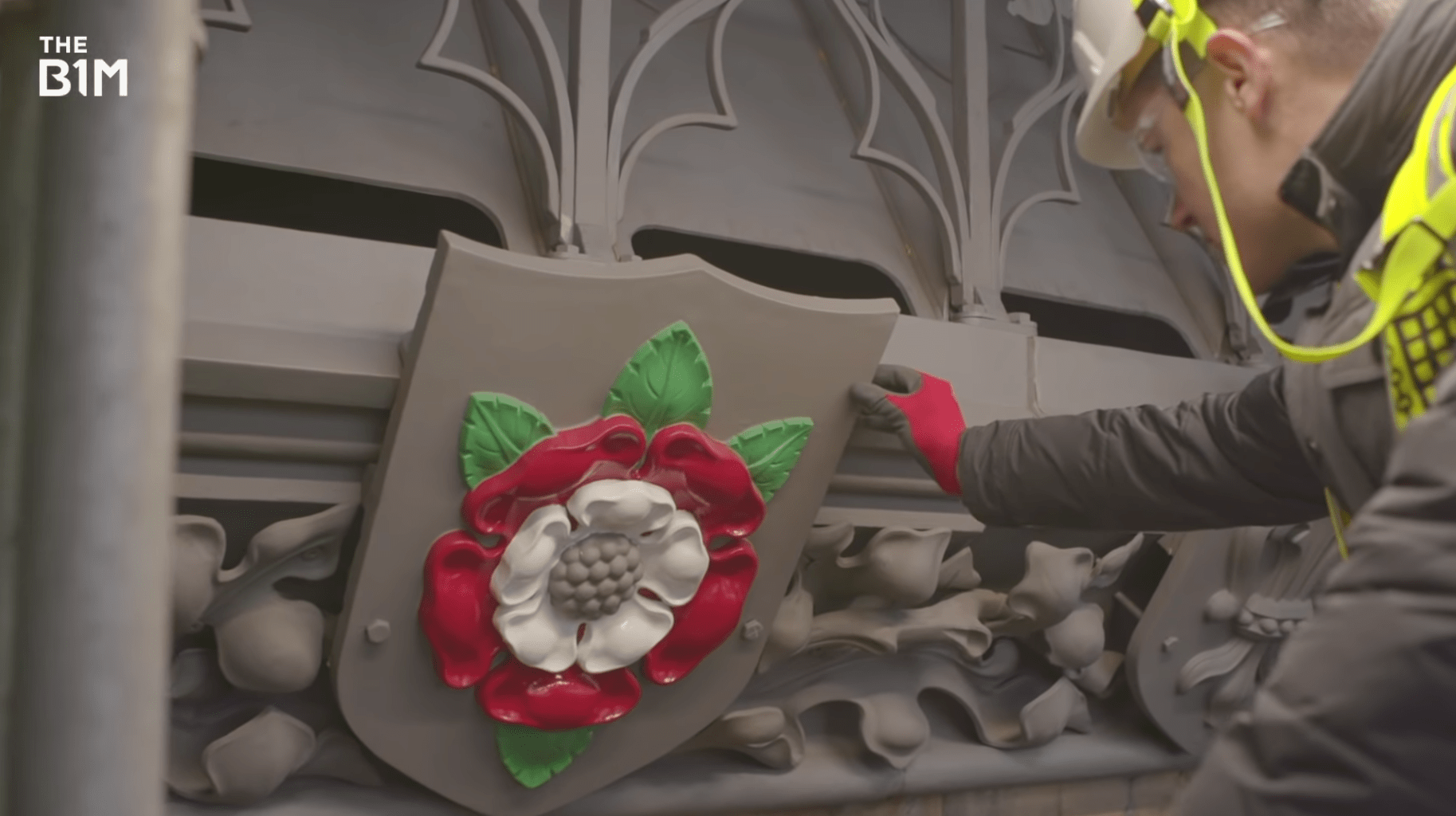 Above: The B1M's Fred Mills inspecting one of the tower's restored features. Below: Mills explores the silenced Big Ben bell itself. 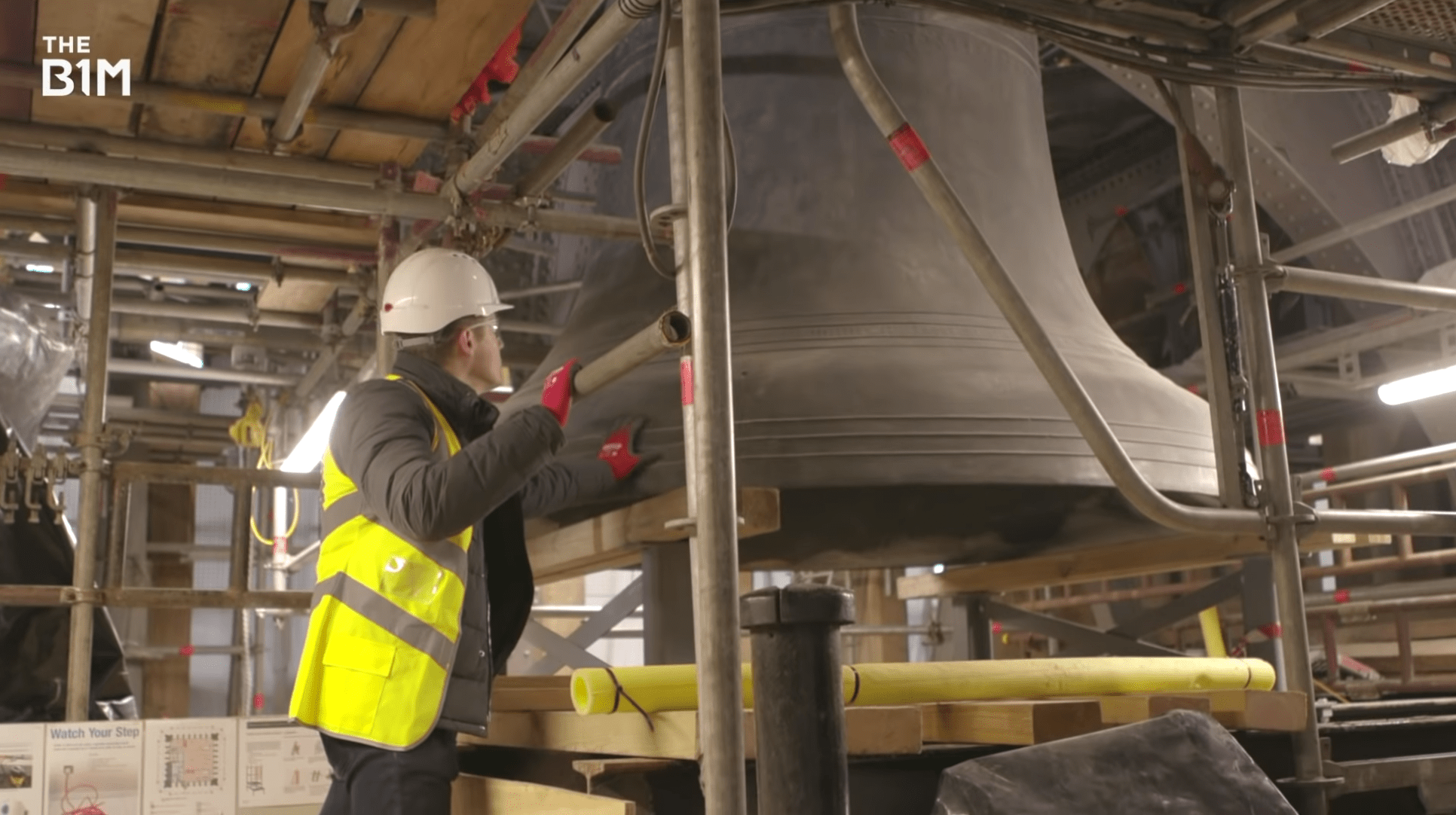 Each individual tile and decorative element was uniquely tagged and digitally tracked throughout this process so that everything went back into its original location once restored.

Progressing down the tower, the quality of every piece of stonework was assessed. Where replacement stone was needed, craftsmen painstakingly hand-carved replacements in an on-site facility at the base of the tower.

In total, more than 700 new segments were created and installed.

The most impressive part of these works is undoubtedly the restoration of the clock faces themselves - and getting up close and actually touching the external face of Big Ben was a once in a lifetime experience.

Each of the 324 pieces of hand-cut glass on each face is being replaced, while the colouring of the hands, numerals and surrounding decoration is being restored to the striking blue, green and gold shown in the tower’s original design.

With a requirement for at least one face of the tower to be left exposed during the works, Londoners have been getting a glimpse of what awaits them when the restoration is complete.

Above and Below: The tower's four clock faces are being restored to their original colour scheme (images courtesy of Jessica Taylor and Mark Duffy).

Before 2017, the only way to reach the top of the tower was by a narrow stone staircase; a daunting obstacle for clock-keepers and visitors alike.

The new elevator added in these works, cleverly hidden within the Elizabeth Tower’s original structure, improves access for maintenance and evacuations. 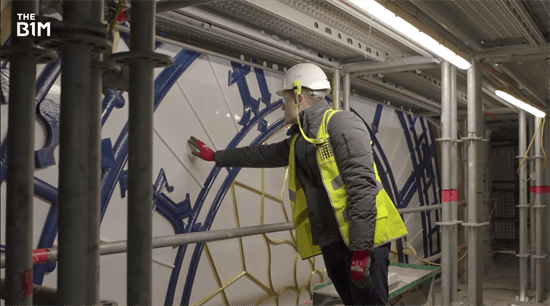 Above: "Once in a lifetime" - The B1M's Fred Mills touches the external face of Big Ben, an act normally reserved for abseilers and only made possible by the temporary scaffolding.

The team began their works at the top of the tower and are steadily working their way down, gradually removing the scaffolding as they progress. Big Ben is steadily beginning to re-emerge on the city's skyline and the extent of its transformation is dramatic.

Led by a young and technology-savvy team - from craftsmen to information modelling specialists - the restoration of this heritage structure has been helped by some truly 21st-century techniques.

Many of the original paper plans and records from previous maintenance projects were incomplete or inaccurate - and understanding the tower’s structure and condition was a challenging task. 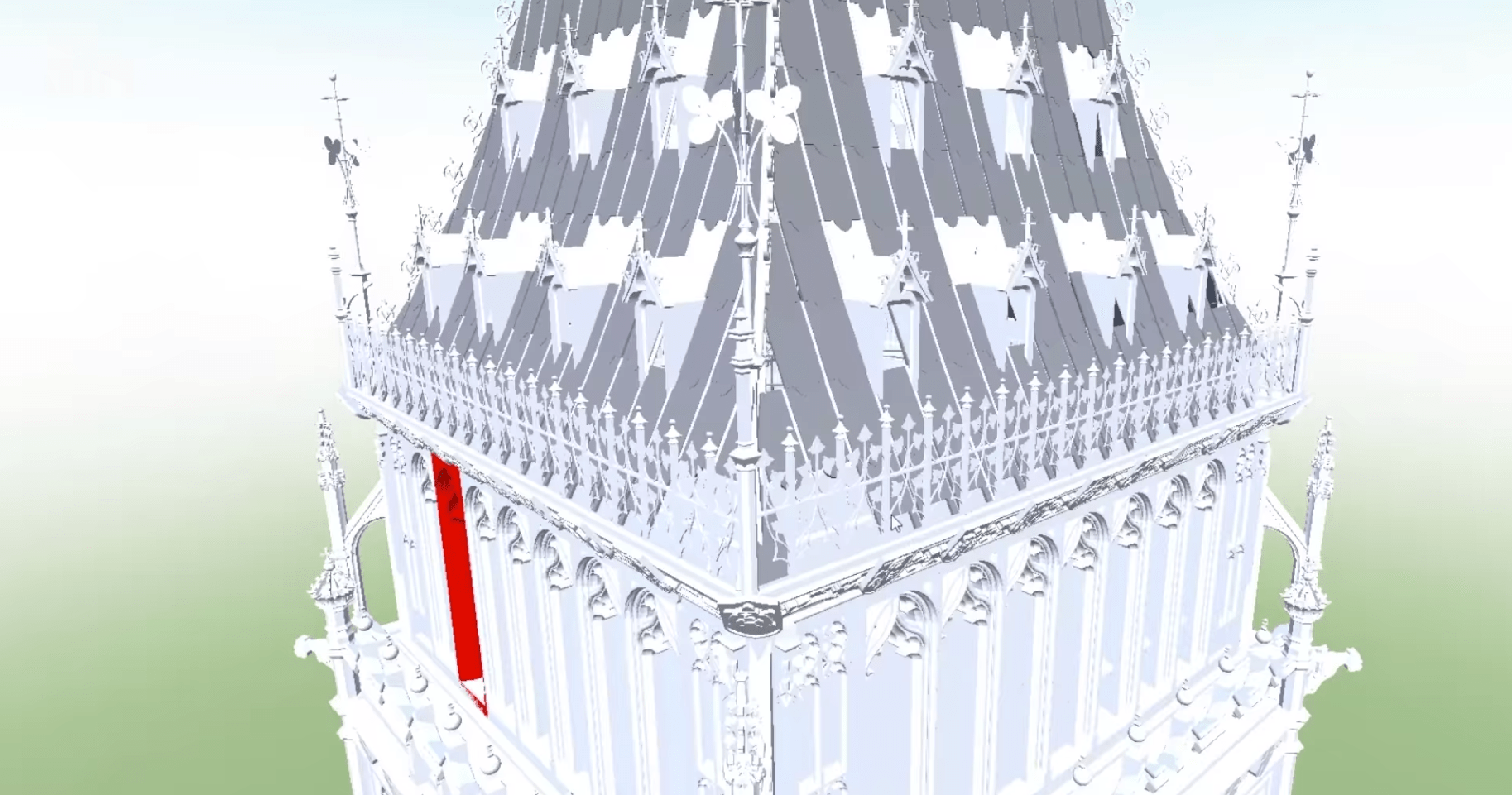 Above: The digital model of the Elizabeth Tower will allow for easier restorations in the future (image courtesy of Sir Robert McAlpine).

To address this and make future restorations easier, the project team are creating detailed digital records of almost every aspect of the Elizabeth Tower, building off the tagging and tracking system used in the works.

As this teamwork to restore Big Ben for our generation, they have discovered notes and messages tucked into crevasses and openings in the stonework, left behind from previous workers wishing them well.

The restoration of Big Ben taking place alongside a much larger and highly complex refurbishment across the Palace of Westminster.

As works progress into the Lords and Commons chambers, the UK’s Parliament will be temporarily relocated.

Above: Big Ben sitting silently while the tower undergoes the most comprehensive restoration in its history (image courtesy of Jessica Taylor). Below: The B1M's Fred Mills interviewing UK Parliament's Senior Project Leader Charlotte Claughton beneath the clock face. 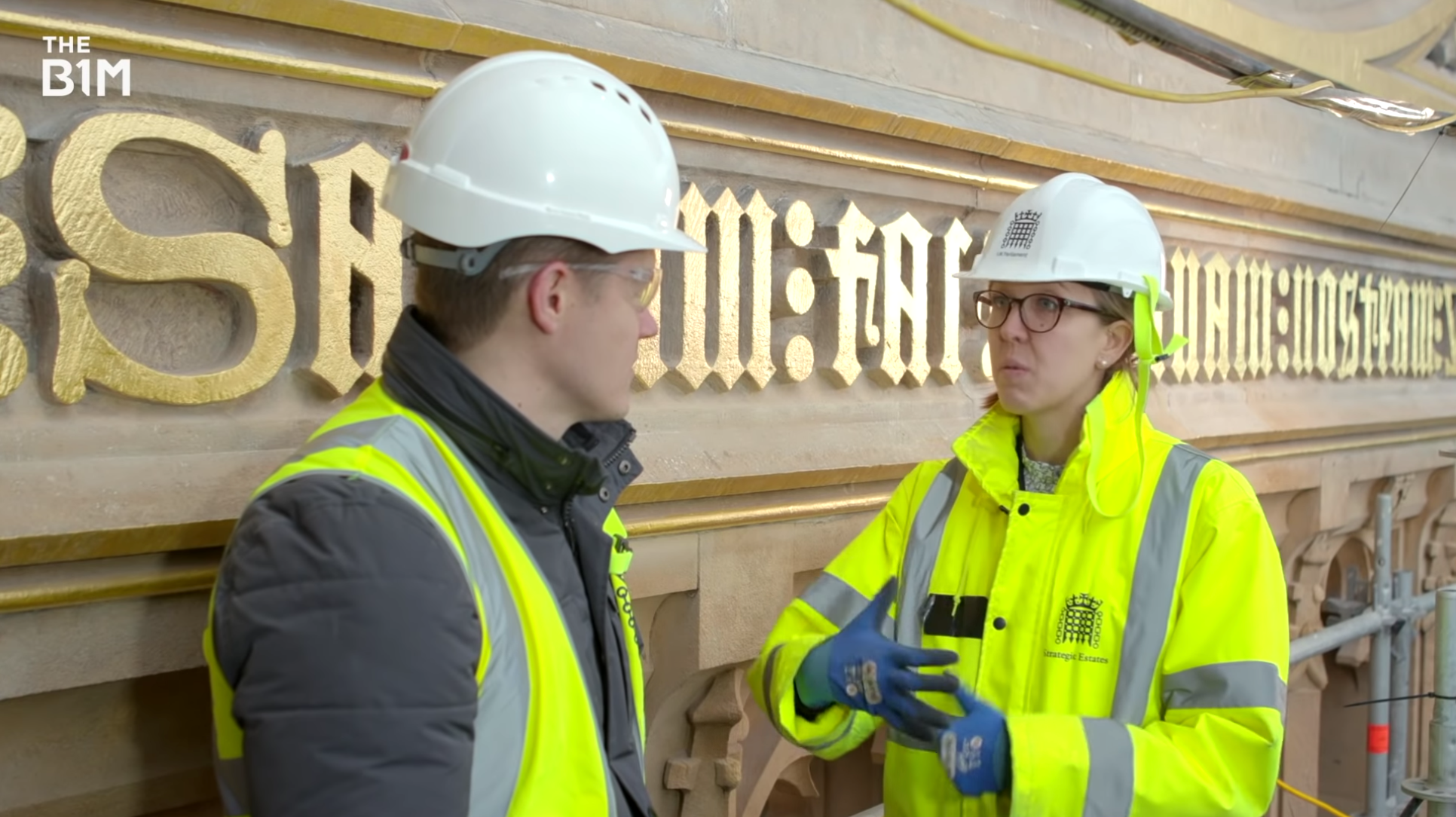 Standing through the reigns of six British monarchs, the tenures of 30 different prime ministers and some of the greatest and darkest moments of its country’s history, Big Ben has witnessed the birth of modern Britain.

Despite falling silent in recent years, what the remarkable team have achieved behind this scaffolding - through thousands of hours of carving, gilding and documenting, with extreme care and attention to detail - will return this British icon to its former glory, allowing it to stand as a symbol of free democracy for generations to come.