RISING FROM an underground melting pot of concrete, steel and precision engineering, the 170-metre 40 Leadenhall Street, also known as Gotham City, is set to make a dramatic impact on London’s skyline.

With a striking design, prime location and green credentials, it could just be the landmark new development London deserves, and the one it needs right now. 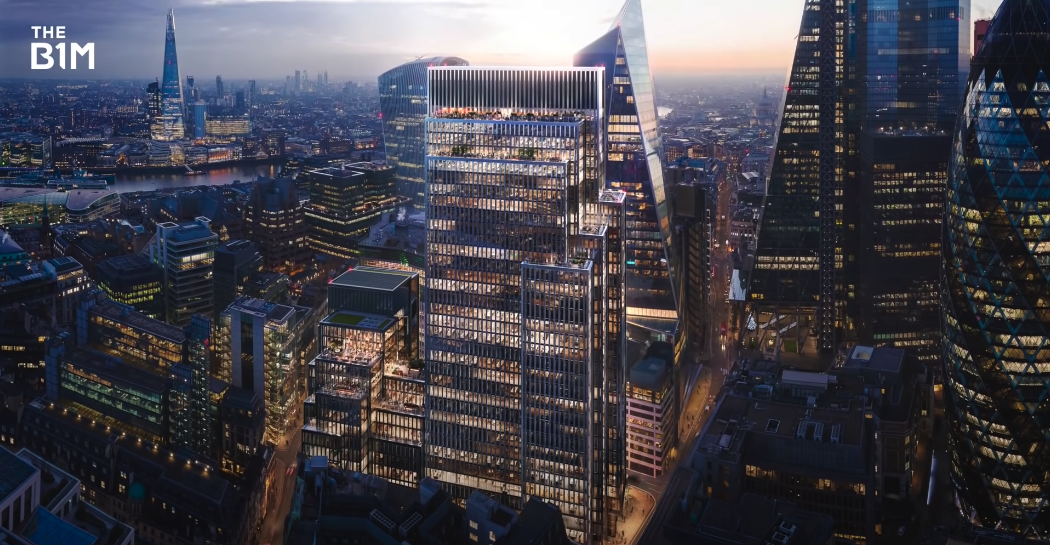 Above: 40 Leadenhall Street is the first in a new series of skyscrapers trying to entice people back to the workplace in the wake of COVID-19. Image courtesy of M&G Real Estate.

The square-mile City of London has seen more than its fair share of history; weathering wars, crises and fires, while standing as a global hub for business through the centuries.

But the period of 2020 and 2021 ranks among its most surreal chapters: the changes of Brexit blending with a pandemic that’s forced people out of their workplaces, impacting companies and the buildings they’re in.

There’s no question that remote working has made the bustling City of London a lot quieter over the past year, but it’s not just the easing of restrictions that’s going to change that.

Post-COVID, many people need a stronger pull to head back to the office and that’s where developments like this - and the concept of “destination offices” that offer all kinds of things to their users - will be really coming to the fore.

40 Leadenhall Street is one of the biggest buildings to ever get planning permission in the City of London.

The new complex in the heart of the insurance district will extend over 84,000 square metres of space, mostly dedicated to new offices, with retail units at street level. 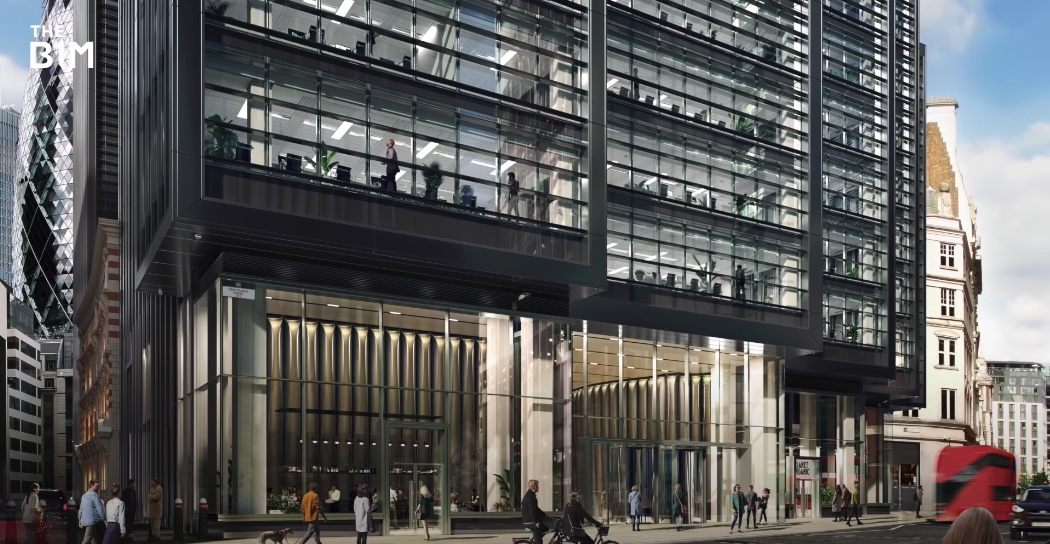 Above: The building rises from 14 to 34 storeys, with two basement levels. Image courtesy of M&G Real Estate.

While its size will automatically make it a prominent feature on the skyline, it’s the building’s design that will ensure it really stands out.

Conceived by Make Architects, 40 Leadenhall’s styling was inspired by the Bauhaus movement, as well as the skyscrapers that rose across Chicago and New York in the early 20th century.

Fearing the dark canyons that might be created by this new tall building phenomenon, American cities introduced step-back rules that would ensure daylight could reach down to street-level.

The measure also enabled buildings to better manage wind-loads, meaning they could be built taller. Countless skyscrapers emerged in this style throughout the 1920s and '30s. 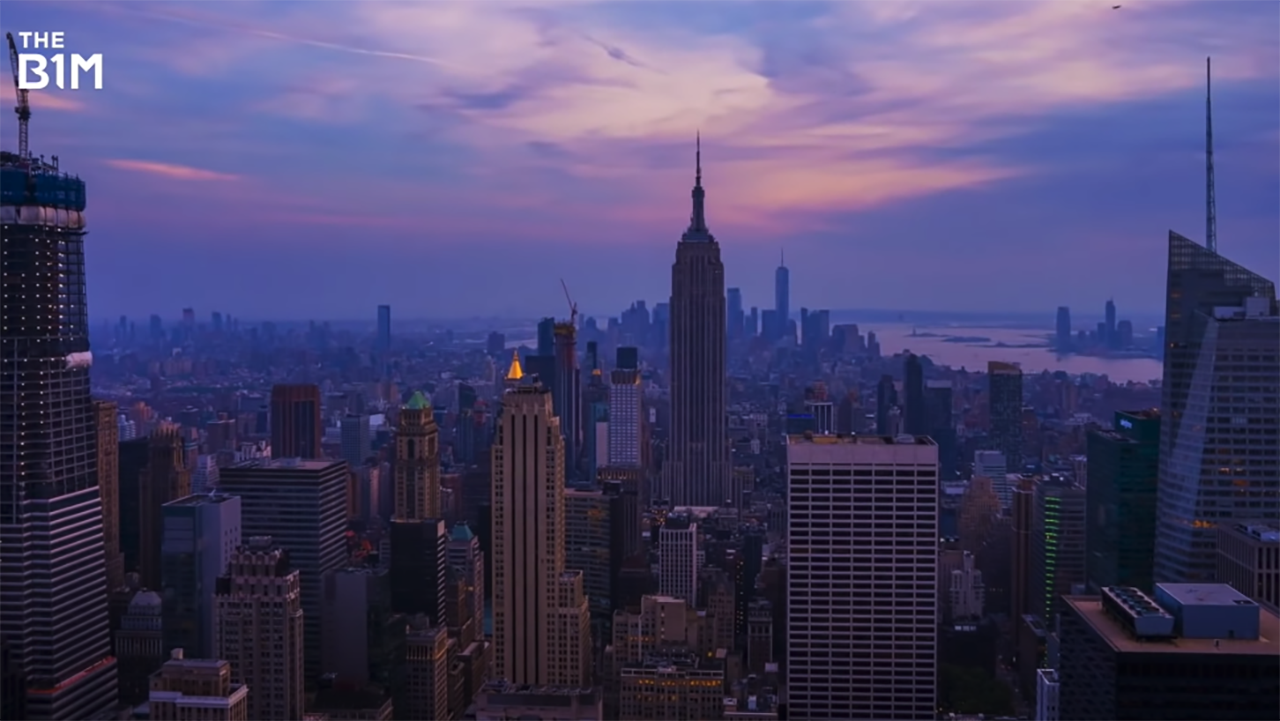 Above: The most notable example of this classic style was undoubtedly the Empire State.

This neo-gothic style of architecture also influenced DC Comics’ vision for Batman in the late-1930s and many people have likened the design of 40 Leadenhall Street to the franchise, which is where the ‘Gotham City’ nickname came from.

It consists of several stepped blocks that fit with the surrounding massing, with the highest point to the North and the rest gradually terracing downwards towards the River Thames.

The clever, staggered design allows it to blend in with the surrounding tall buildings while preserving protected views or sight lines to St Paul’s Cathedral - a rule that almost every other skyscraper here has had to consider.

Sitting on the western edge of the site - carefully protected and restored throughout the works - the Grade II-listed 19-21 Billiter Street building will become part of the new development.

Sustainability and energy efficiency are also priorities, with carbon emissions set to be around 30% lower than current regulations. 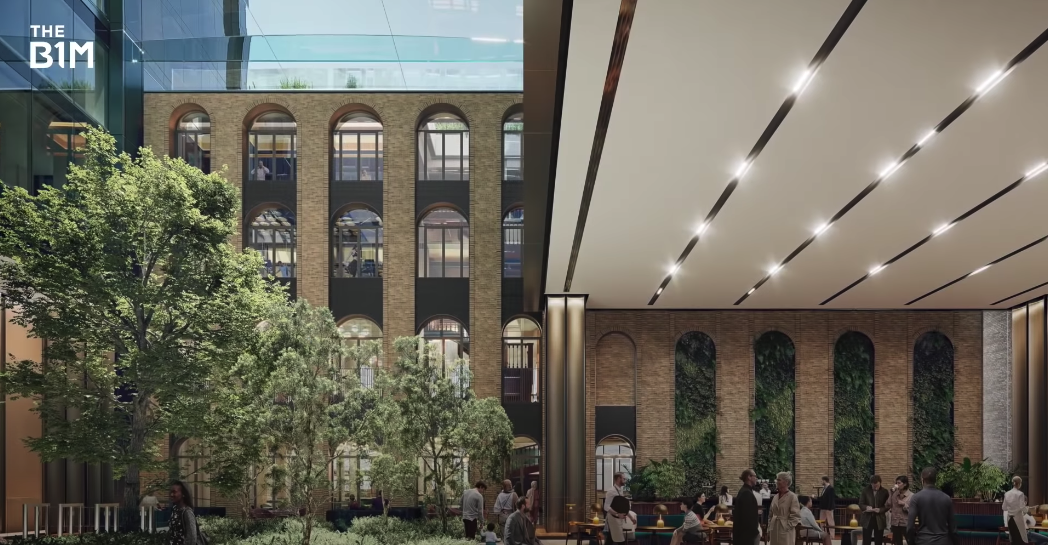 Above: The new building is due to meet several key energy standards. Image courtesy of M&G Real Estate.

Achieving all this on such a tight site in the middle of one of the world’s biggest cities is not easy.

Rising to the challenge, main contractor Mace Group is working alongside WSP, Make Architects and development manager Nuveen on the project.

Due to the building’s varying height, two cores are being constructed – one at each end. These form the central part of each section and give structural stability while housing the elevators and other services.

Both are side-core arrangements, helping to create large, open floor plates - but they're being built using different methods.

“The excavation is all relative to the build strategy that we’ve got. We’ve got a top-down construction on the north core, which is the higher of the two towers and then we’ve got a blue sky, bottom-up build strategy on the south core,” says Darren Heels, Operations Director, Major Projects, MEP at Mace Group.

“We’re currently bulk excavating the site, which is around 40,000 cubic metres of ground to take out.”

The top-down approach allows the team to work in two directions simultaneously, with the floors above ground built at the same time as the basement levels.

This huge excavation on the site really demonstrates the challenges of building in a dense city centre.

With so many surrounding large buildings all exerting pressure on the ground, an excavation of this size would take away some of the earth that their weight is resting on - it would interrupt their so-called angle of incidence.

To avoid any risk of buildings collapsing, the team first dig and pour a series of overlapping concrete columns in the ground, known as a continuous flight augering (CFA) approach and cap them with a solid concrete capping beam.

Only then do they begin to excavate the site to construct the basement. 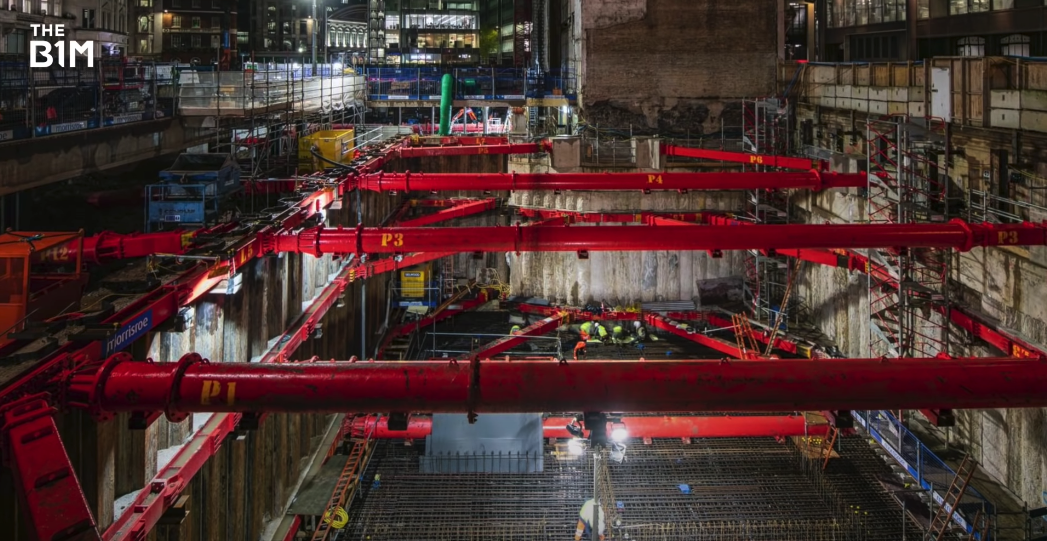 Above: Enormous red steel struts help to push back the pressure of the surrounding building’s foundations, before the solid concrete basement floors are installed. Image courtesy of Mace Group.

To speed up the process and make construction easier on a restricted site, prefabrication is being used extensively, forming a key benchmark for future Mace Group projects.

This is where building elements are manufactured under controlled conditions in a separate facility before being transported in and assembled on site.

“We’ve used offsite manufacturing as our key driver around achieving spatial fit and the delivery and build sequence,” Heels continues. “We’ve fundamentally changed our approach to the early stages of design.

“Working with Make and WSP we’ve managed to develop a design that’s fit for manufacturing and we’ve really used that strategy, with the 3D model and the digital technology, to deliver our prefabrication elements and the major components for the building.”

Technology has played a critical role in keeping the project on track and error-free - even during the pandemic.

Mace Group and Nuveen are using information modelling and Autodesk Construction Cloud’s all-in-one BIM 360 software to plan and coordinate the construction of the building digitally. 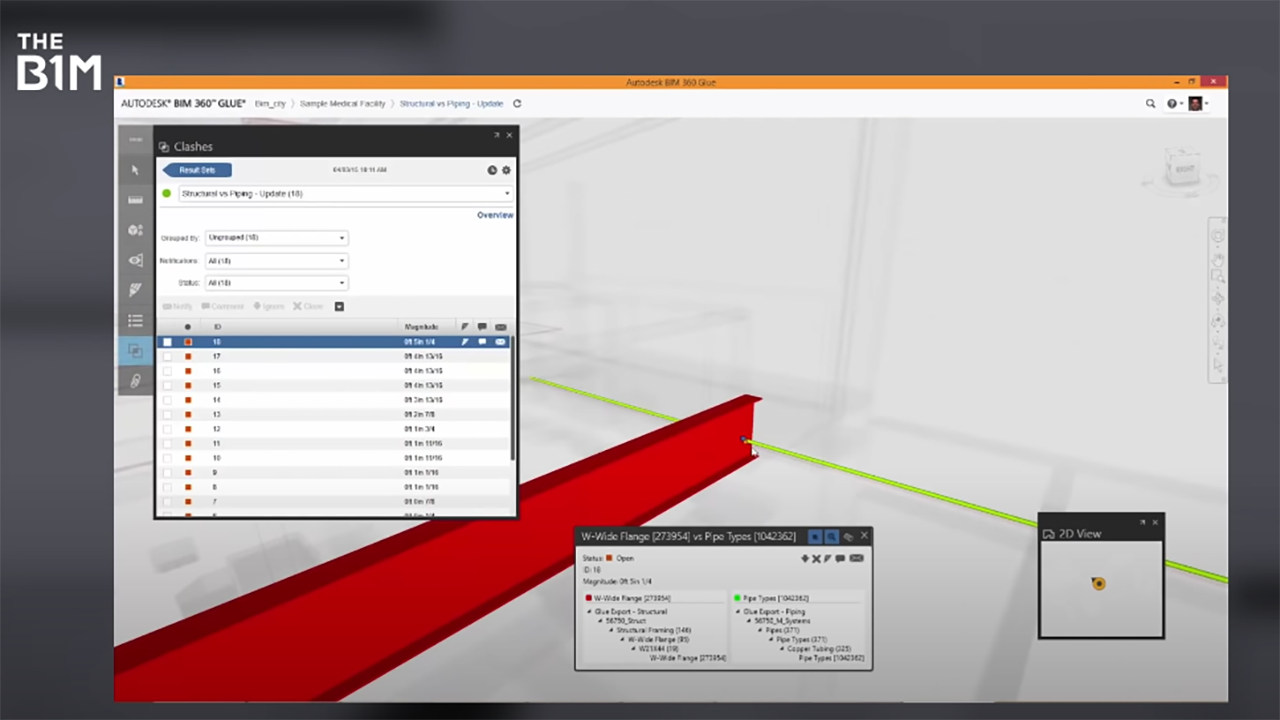 Virtual 3D models of the entire project allow the team to stay a step ahead of the physical build, improving efficiency and ensuring costly mistakes are avoided.

“When COVID hit we realised there would be difficulties with people working on the model at the same time so we looked at the BIM 360 Docs and Design system,” explains Max Kidwai, Senior BIM Manager at Mace Group. “It allowed all the designers and trades to put their models on there in a live working environment.”

This means that everyone - including those working from home - can track changes to the models and ensure the right work is happening in the right areas.

Also from Autodesk, Navisworks and BIM 360 Glue were used to combine models together and give the wider team easy access to them in the Cloud.

On the ground, Autodesk BIM 360 lets the team on site verify progress by filling out digital check sheets and attaching photos.

There’s even a tag and track system, where all elements arriving to site are given barcodes so they can be quickly located at any time, a process that Mace will soon be implementing. 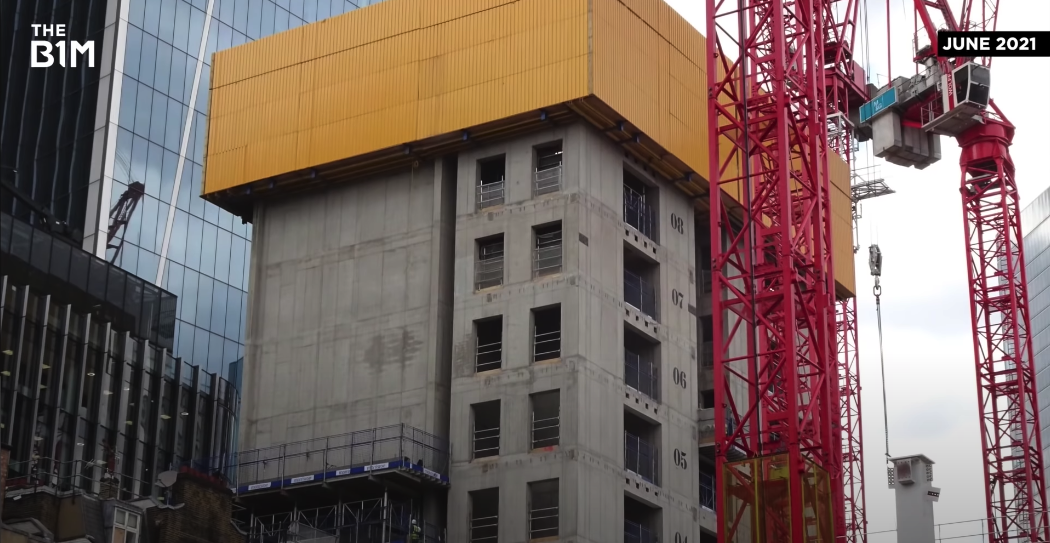 Above: The project is now motoring towards its 2023 completion date. Image courtesy of Geogregor.

With its use of modern methods of construction and advanced-tech, 40 Leadenhall Street is now rapidly rising from its complex foundation.

Far from simply being the newest member of London’s skyscraper club, in the wake of the pandemic the building represents the first in a new age of tall buildings in the city where appeal is everything.

This video was sponsored by Autodesk. Learn more about the software tools used and how they can help your project here.