WHEN it completed in 1936, the Hoover Dam was the largest concrete structure ever built.

The incredible feat of engineering played a critical role in the development of the American southwest during the early 20th century - providing flood management, hydro-electric power and securing a reliable source of water for millions.

With plans around since 1900 for a dam to harness the power from the mighty Colorado River, it was not until 1928, that the United States (US) Congress authorised the project and initial surveying began. 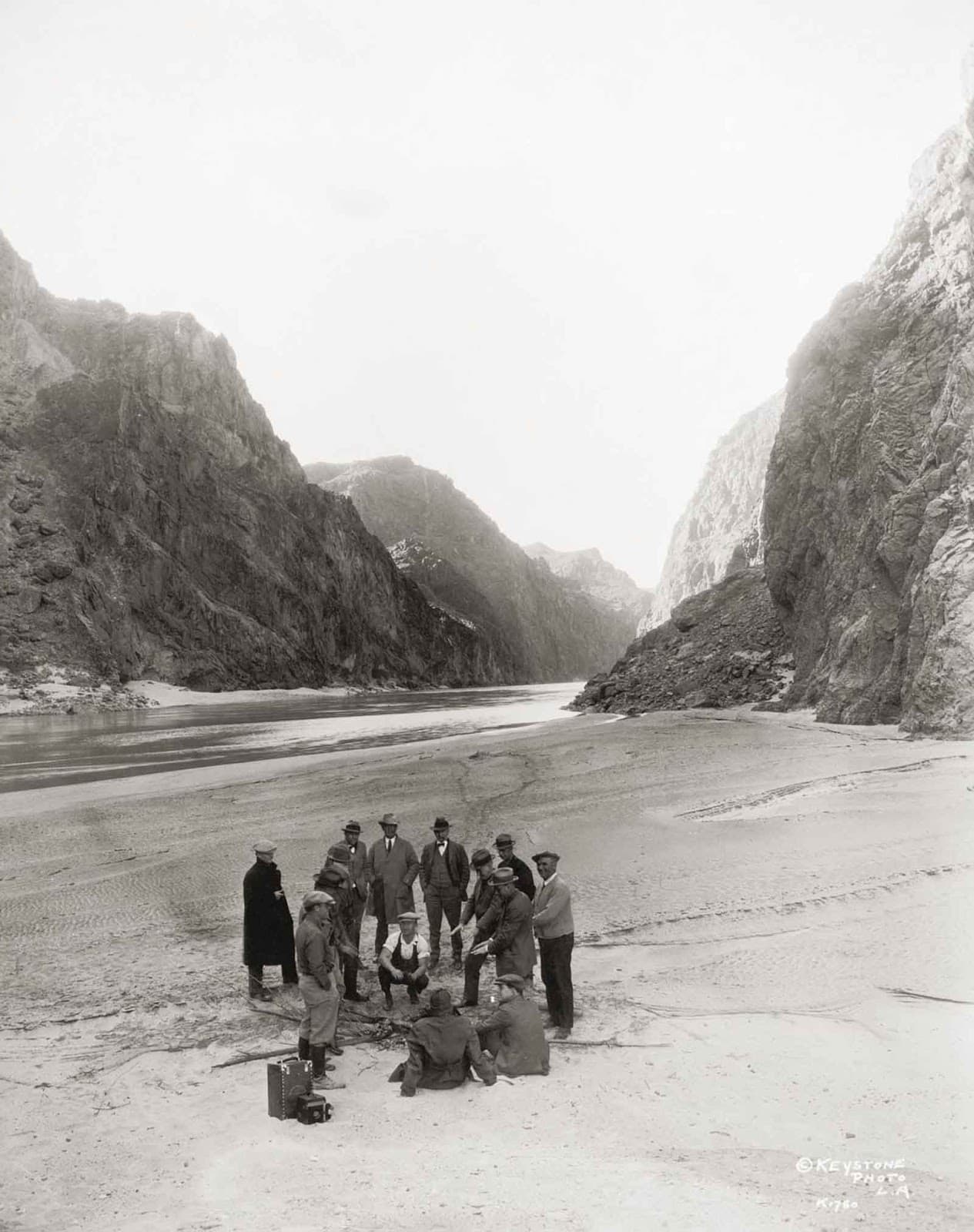 Above: Early surveying of the future site of the Hoover Dam (image courtesy of the U.S. National Archives and Records Administration).

With the onset of The Great Depression just a year later, the project was seen as a way for the US government to provide much-needed jobs in the southwest, which had been experiencing a population boom prior to the stock market crash.

Located on the Nevada-Arizona border - 26 miles southwest of Las Vegas - the project required a vast number of workers and their families to relocate, and an entire new town was established.

Owned and run by the government, "Boulder City" was to be a model for the rest of the country to follow in the dark times of the depression.

To drive the project’s progress, President Hoover ordered construction of the dam to start in May 1931 - before the necessary infrastructure at Boulder City was in place - and many workers lived in temporary tents in what became dubbed "Ragtown".

To escape the harsh living conditions, many workers began to frequent the then small outpost of Las Vegas, driving significant growth and earning it a reputation for gambling and adult entertainment.

Though living conditions were poor, work began on diverting the Colorado River so that the dam could be constructed on the dry riverbed.

To divert the water, four 56 foot, 17 metre wide diversion tunnels (two on each side of the river) were bored through the canyon using nothing more than dynamite followed by workers using pneumatic jackhammers. 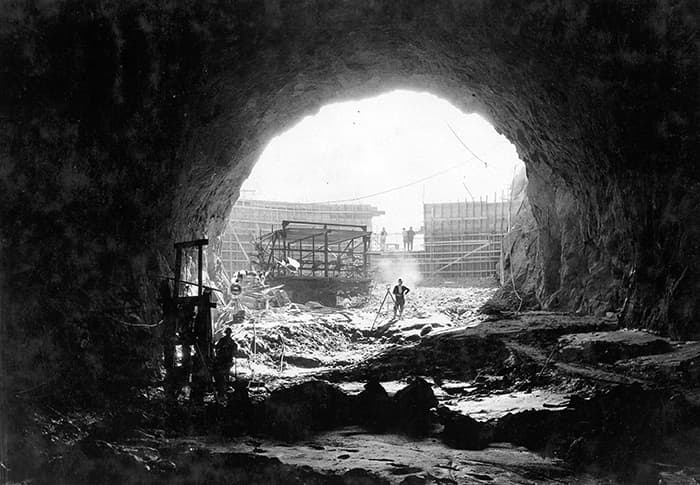 Above: One of the Hoover Dams four diversion tunnels under construction (i mage courtesy of the Bureau of Reclamation ).

Excavated rock was then dumped into the Colorado River, creating a cofferdam that forced water to flow through the newly constructed tunnels.

A second cofferdam downstream prevented water flowing back into the construction site and created an area that could be pumped dry, exposing the river bed.

The Hoover Dam employs a gravity-arch design and is held in place by the weight of its concrete together with the pressure of the water it holds forcing it into the canyon floor and walls.

Above: The design of the Hoover Dam used its own weight and the pressure of the water behind it to keep the structure in place ( image courtesy of United States Department of the Interior and the Bureau of Reclamation).

Such a principle required the canyon surfaces to be smoothed as one of the first activities, to prevent leaks.

It was during this phase of the project that the first hard hats began to be used. Workers dipped their hats in tar and let it harden, protecting them (at least to some extent) from falling debris. Seeing their success, the project’s leaders quickly ordered thousands of these hats and mandated their use by workers.

In 1933 - some 18 months ahead of schedule - the first concrete pours on the dam began.

As concrete gives off heat and contracts as it cures, a project on the scale of the Hoover Dam would have taken more than 125 years to harden if poured in a single continuous pour and structural weaknesses would have caused the dam to crack under its own weight. 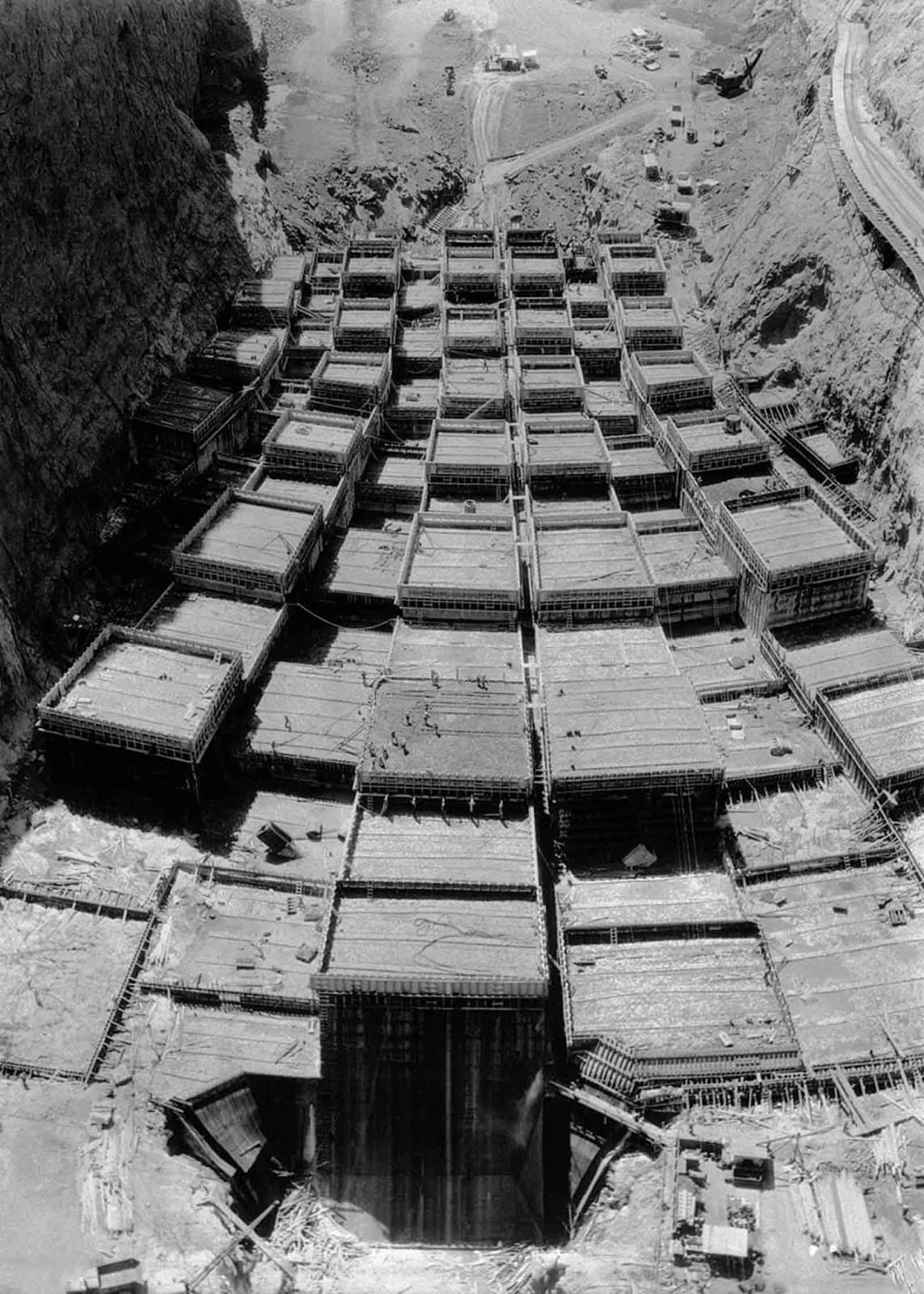 Above: By dividing the structure into smaller sections the concrete was able to cool and harder much faster than if it was poured in a single continuous pour (image courtesy of the U.S. National Archives and Records Administration).

Instead, the site was divided into a series of rectangle moulds, some as large as 50 square feet (15 square metres) in size.

These moulds were fitted with a series of steel pipes that carried river water through them, allowing the concrete to cool and harden much faster than if it was left to do so alone in the heat of the Nevada desert.

Once the concrete had hardened and stopped contracting the pipes and hairline gaps between neighbouring blocks were filled in with grout and a new layer of moulds was placed on top. This process was repeated time and again to build the dam walls. 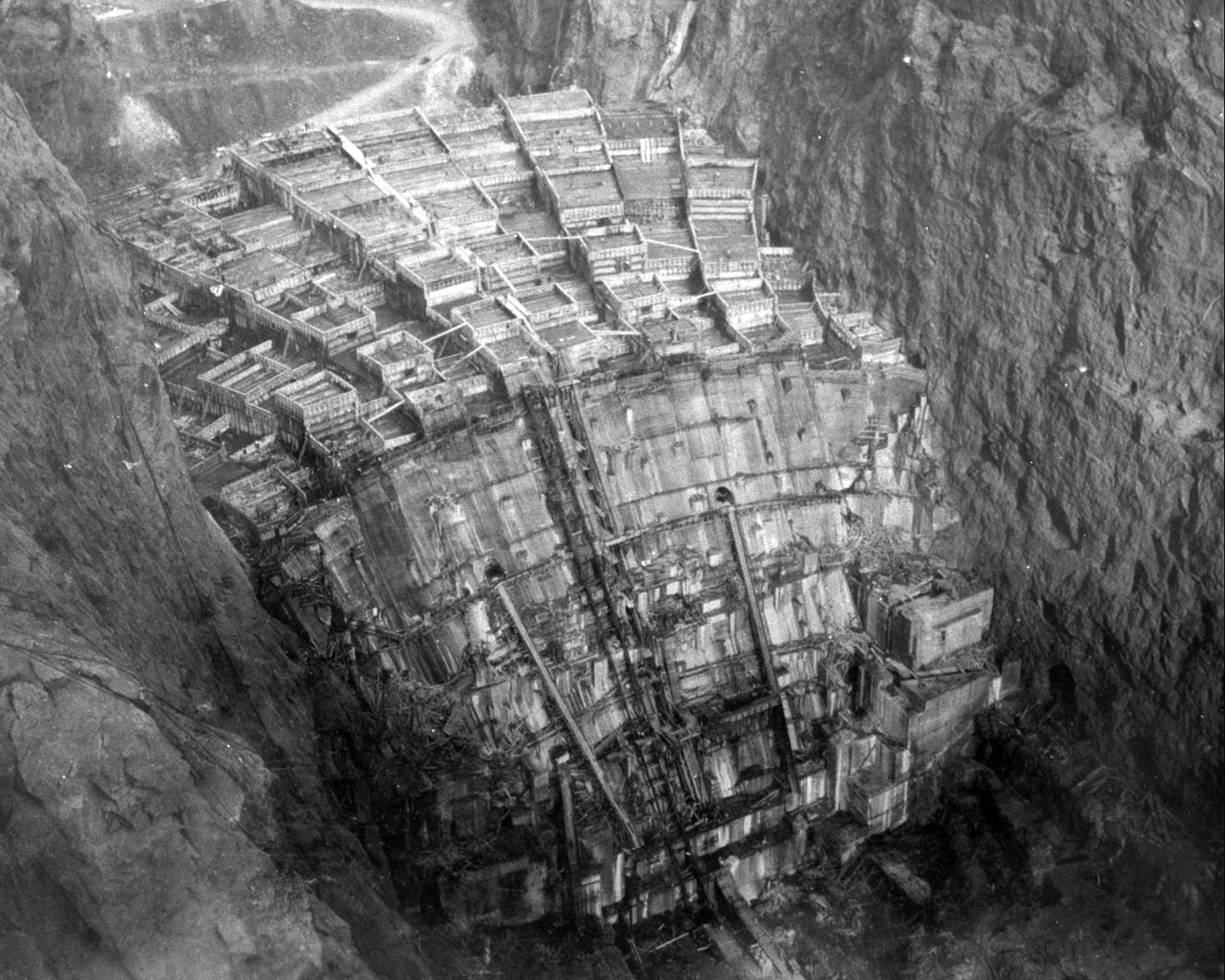 Above: The Hoover Dam rising up the canyon walls (image courtesy of the Bureau of Reclamation).

As the dam steadily rose, getting the concrete to where it had to go before it began to harden began to pose a significant challenge.

To overcome this, an ingenious system of overhead cables that carried buckets of concrete from specially built concrete plants on the Nevada side of the dam to the required location on the construction site was used.

By 1935 - two years ahead of schedule - the 726 foot high dam was complete and the river diversion tunnels were sealed shut, allowing the Colorado to begin flooding the canyon behind the structure and creating the reservoir that we know today as Lake Mead. 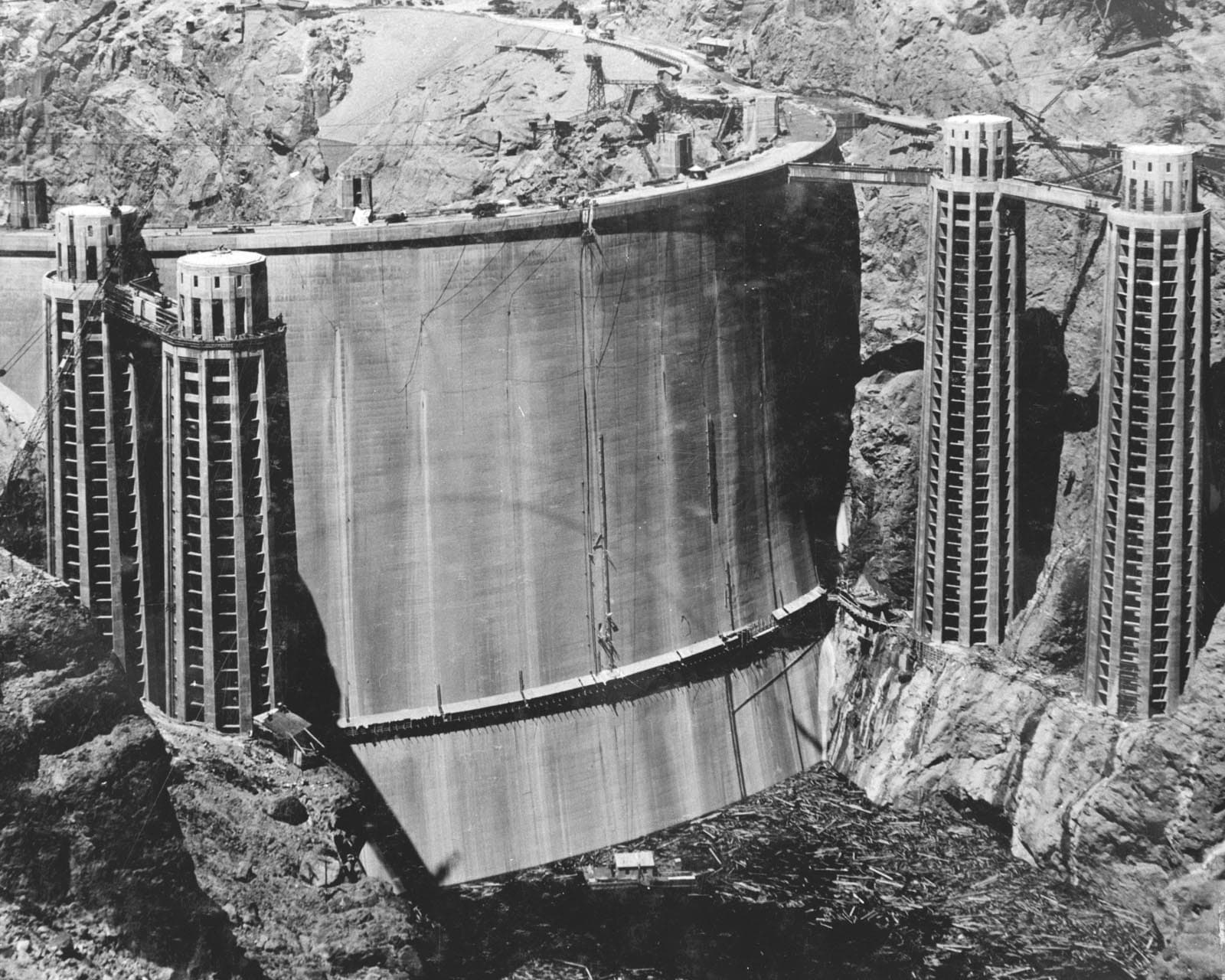 Above: Lake Mead is born as the Colorado River begins to fill the canyon behind the Hoover Dam (image courtesy of the Bureau of Reclamation).

Fit out of the adjacent power plant and its associated infrastructure took place in parallel with construction of the main structure and the dam began generating electricity at the end of 1936.

Today, this remarkable infrastructure project has an average output of 4.2 billion kilowatt hours and provides water and electricity to millions across the south western United States; an economic catalyst to an entire region of North America and a powerful example of the impact that our industry can have.