IN THE 1920’s, long before the technologies and advancements of today’s construction industry, a scheme was conceived to build an impossible bridge across the Golden Gate Strait in California. Today that structure remains one of the world’s most famous landmarks. But to truly appreciate the magnitude of this achievement, you need to understand the bridge’s story.

In this must-watch documentary – part of The B1M’s construction history series – we explore the journey behind one of the greatest engineering feats of the 20th Century. 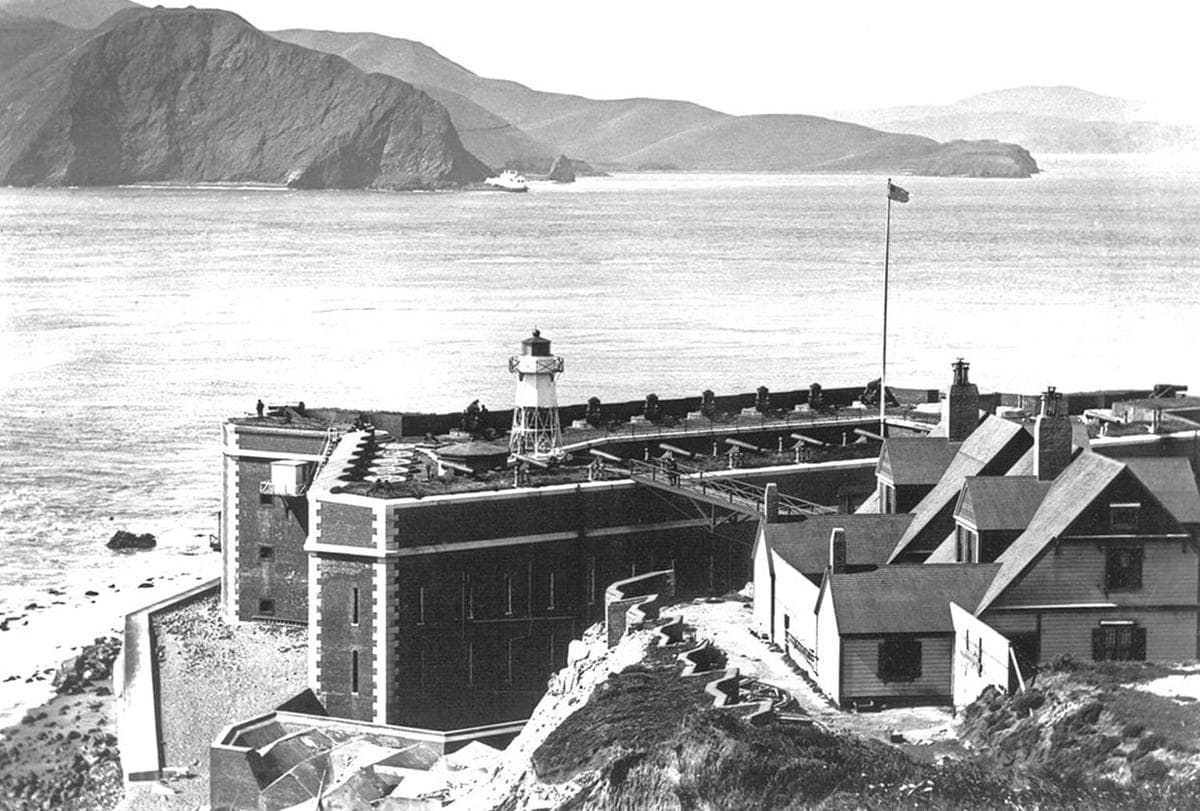 Above: The Golden Gate Strait prior to construction of the bridge (image courtesy of the US National Park Service).

Before the existence of the bridge, the only way to cross the channel without taking an extended drive around the bay was by ferry. With the rise of cars and the growth of San Francisco in the boom years, some 2.5M car trips were being made across the water each year by 1929 and the congestion levels fuelled calls for a bridge to be attempted across the gap.

Many felt that such a feat was impossible. The channel’s width, combined with a depth of 372 feet (around 113 meters), and the harsh environmental conditions were all too great to overcome.

"Many felt the feat was impossible. The channel’s width, depth and the harsh environmental conditions were all too great to overcome"

To assess the project’s feasibility, the city turned to renowned bridge engineer Joseph Strauss. Strauss had a high pedigree for developing bridges but was infamously difficult to work with and had a reputation for creating unattractive designs.

His first proposal was widely disliked, and the city’s authorities insisted that he could only proceed if he accepted design input from others. That input came from Leon Moisseiff, Irving Morrow and Charles Alton Ellis, and led to the development of the bridge as we know it today. 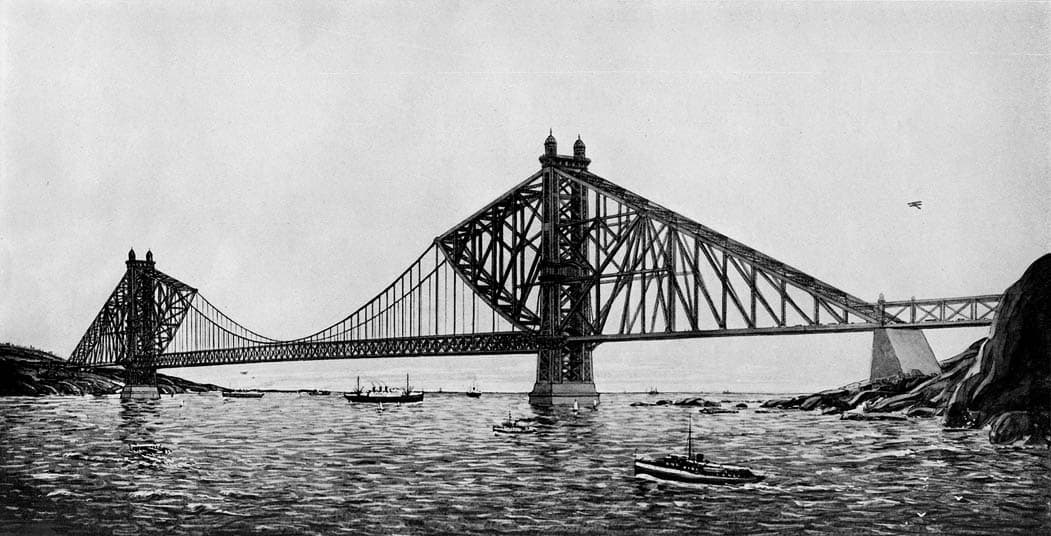 Above: Strauss' first proposal for the bridge was widely disliked (image courtesy of The Golden Gate Bridge Highway and Transportation District).

Despite widespread public support, gaining approval for the bridge was not easy. The Golden Gate Bridge Highway and Transportation District (a holding company established to construct and operate the bridge) faced opposition on a number of fronts.

Firstly they had to contend with the Southern Pacific Railroad Company who operated the then highly profitable ferry service. The operator filed over 2,300 legal disputes in an attempt to prevent the bridge proceeding.

Then they had to deal with the US Department of War (as it was then known). The Department’s Officials feared enemy planes bombing the bridge and collapsing it into the strait, trapping US navy ships in the bay. They also voiced concerns about vessels colliding with the bridge during rough weather or in San Francisco’s infamous fog. The Department of War even pushed for the bridge to be painted black with yellow stripes to make it highly visible. 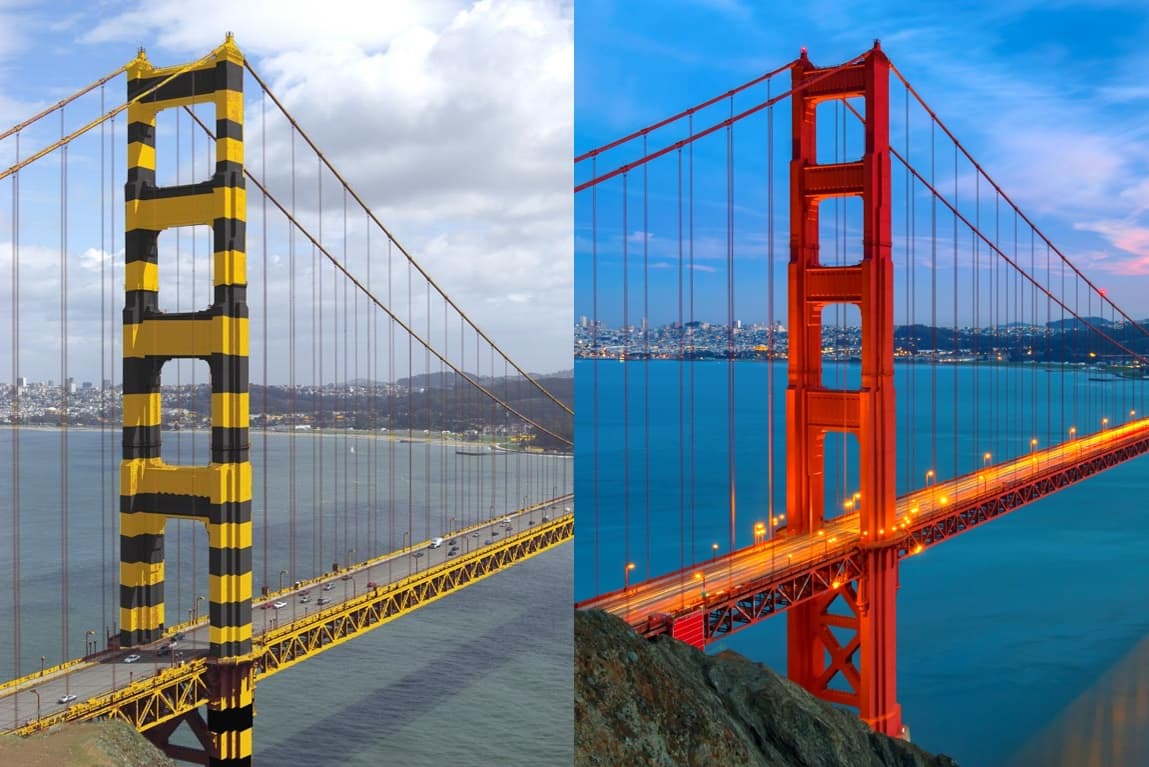 No sooner had that milestone been reached, than the financial crash and great depression hit. Government funding for the bridge evaporated and its future once again looked very uncertain.

Determined to boost their economy with all the benefits that the bridge could bring, the city’s authorities took matters into their own hands. To secure funding, they proposed a bond measure secured against the properties of their citizens in San Francisco and the counties north of the bay. 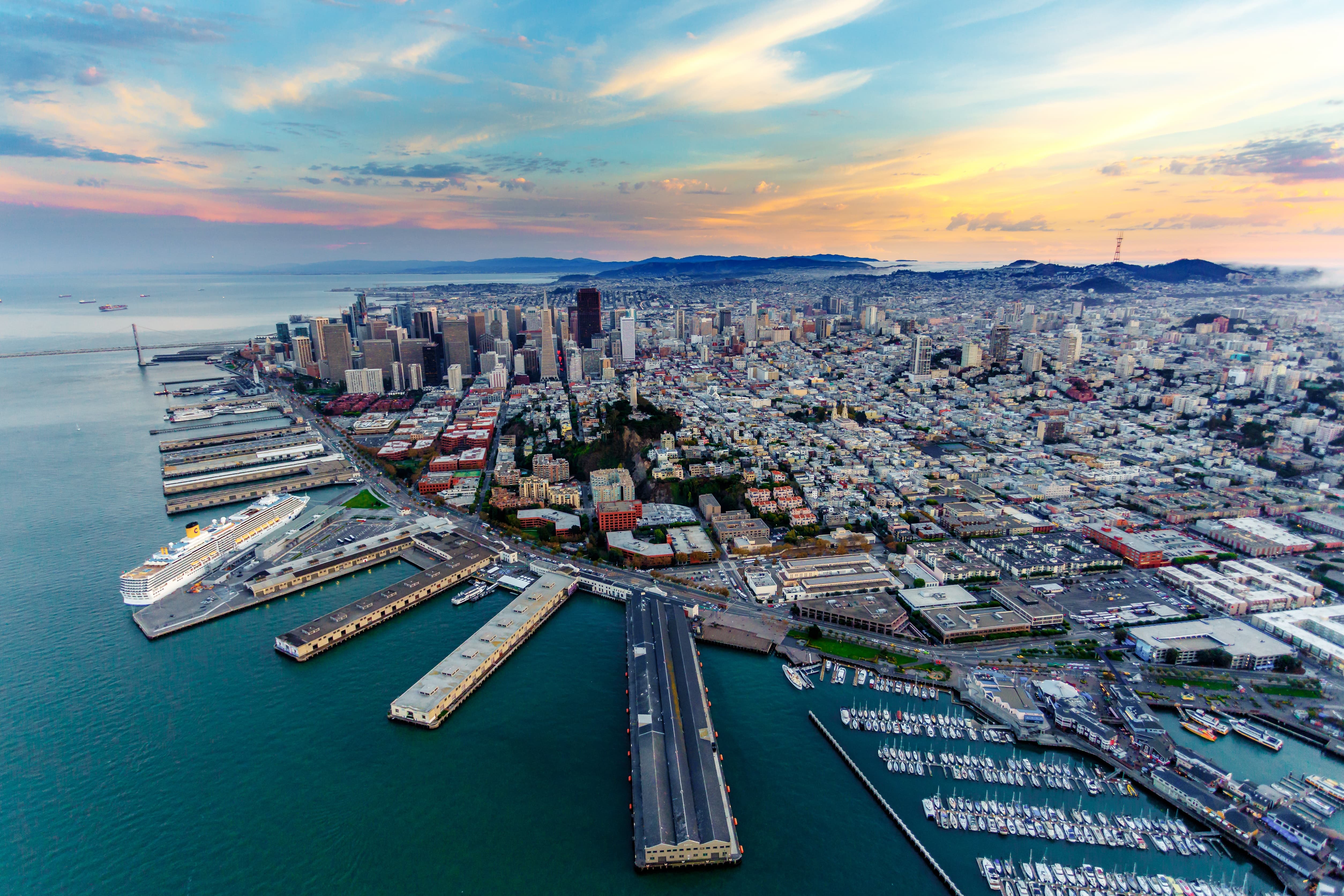 Above: The bond-measure applied to the properties of citizens in San Francisco and in Californian counties north of the bay.

In a remarkable step, this decision was put to a referendum and those Californian’s decided to proceed with the bond, despite concerns about the bridge’s feasibility. The bridge’s USD $35M cost and associated the finance fees were only paid off in 1971.

This historic vote, combined with an initial USD $5M credit line from the Founder of the Bank of America, enabled construction works to commence.

But for all the struggle that had gone in up to now, the hardest days still lay ahead.

Construction began in January 1933 with the erection of the bridge’s towers. Each of these structures weighs a staggering 22,000 metric tonnes and stands 746 feet tall; about 227 meters above the waters of the bay. They carry the entire weight of the bridge.

The first step was to create footings and erect the relatively straightforward north tower on the banks of Marin County. 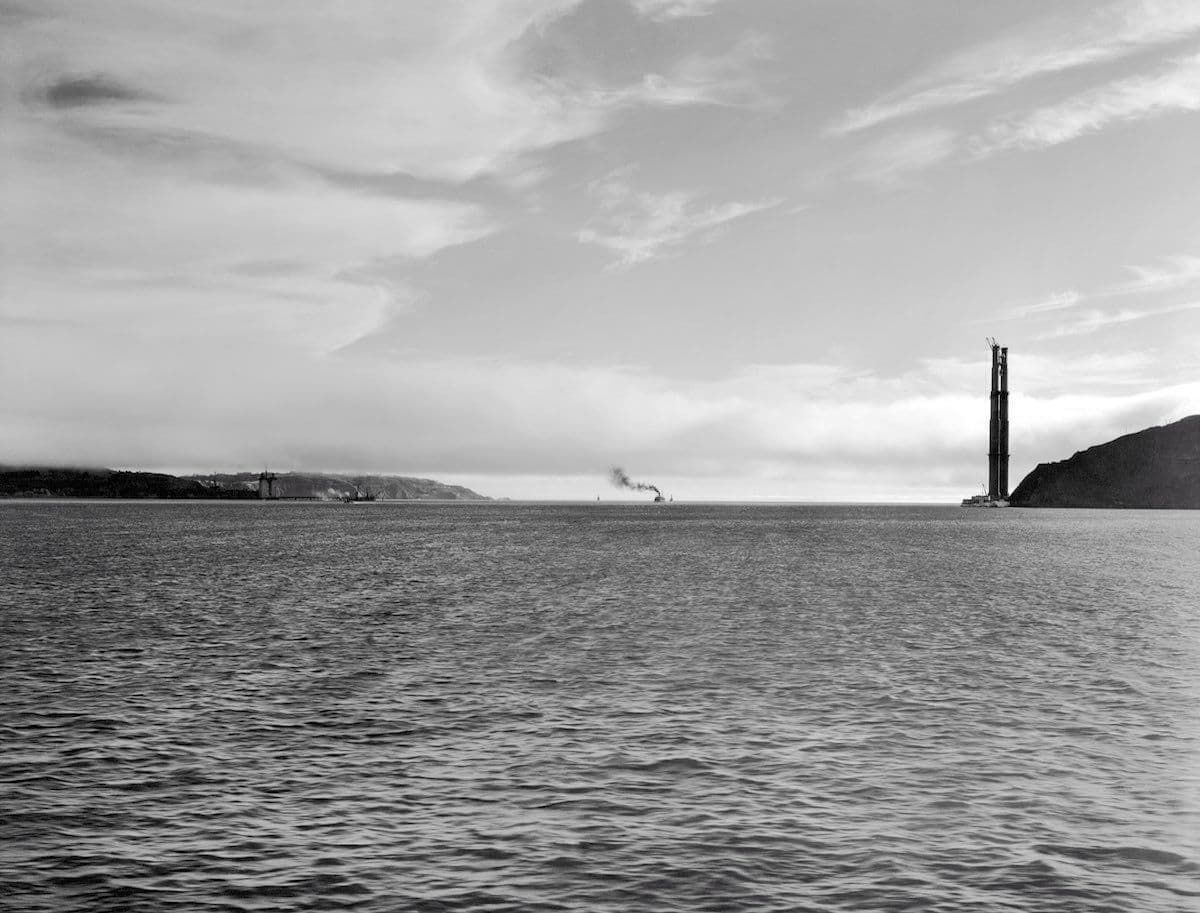 Above: The north tower was constructed first (image courtesy of Moulin, Underwood Archives and Getty Images).

Construction of the south tower out in the waters of the strait was far more challenging. First, the team built a temporary pier 1100 feet (335 meters) out into the ocean. This pier was destroyed twice during the works; once by a storm and again by a steamer ship travelling in the fog.

At the end of the pier, pilot bombs were dropped down shafts to break up the rock under the sea bed. Seagulls swarmed over this operation as stunned fish floated to the surface. With the bedrock loosened, the area was dredged before the first underwater concrete pour. The area was then pumped out, and the remainder of the concrete was dry poured. 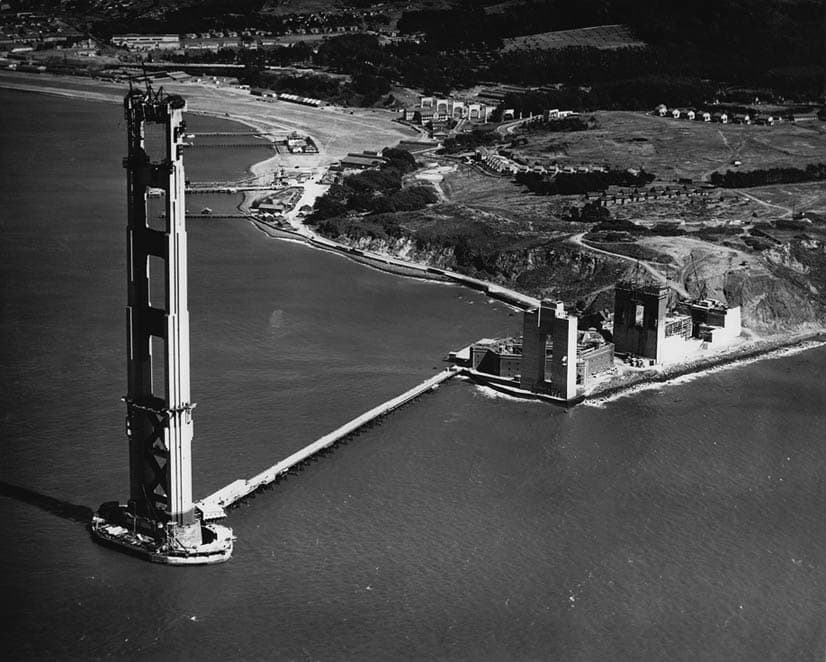 Above: The south tower under construction at the end of it's temporary pier. The concrete anchorages are visible to the right (image courtesy of The Golden Gate Bridge Highway and Transportation Company).

Simultaneously, the concrete anchorages that the suspension cables would connect to were cast on either bank of the strait. The scale of concrete being poured across the bridge site led to an on-site mixing plant being established. With the southern footing in place, the steel south tower was erected.

The next step was to suspend cables across the bridge, a process which began in the summer of 1935. The cables used are in fact formed of 27,572 individual wires that total some 80,000 miles in length; enough to circle the globe three times.

With shipping lanes closed, the first wires were dragged across the bay by a coastguard vessel and lifted by crane into the 150 tonne curved cable cradles on the top of each tower. 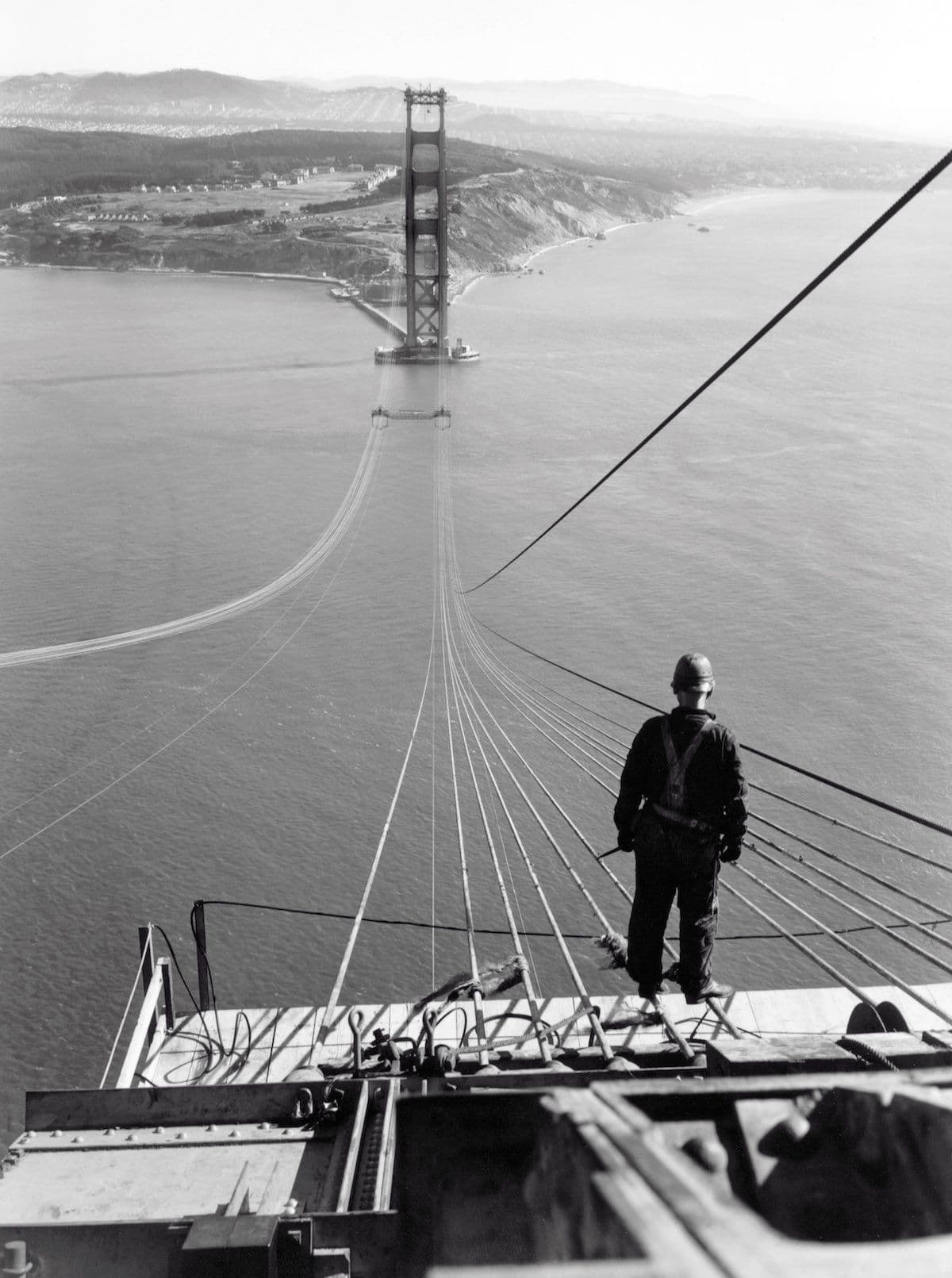 Above and Below: The painstaking process of bundling and draping wires back and forth across the bridge's towers (images courtesy of Underwood Archives and Getty Images [above] and AP [below]). 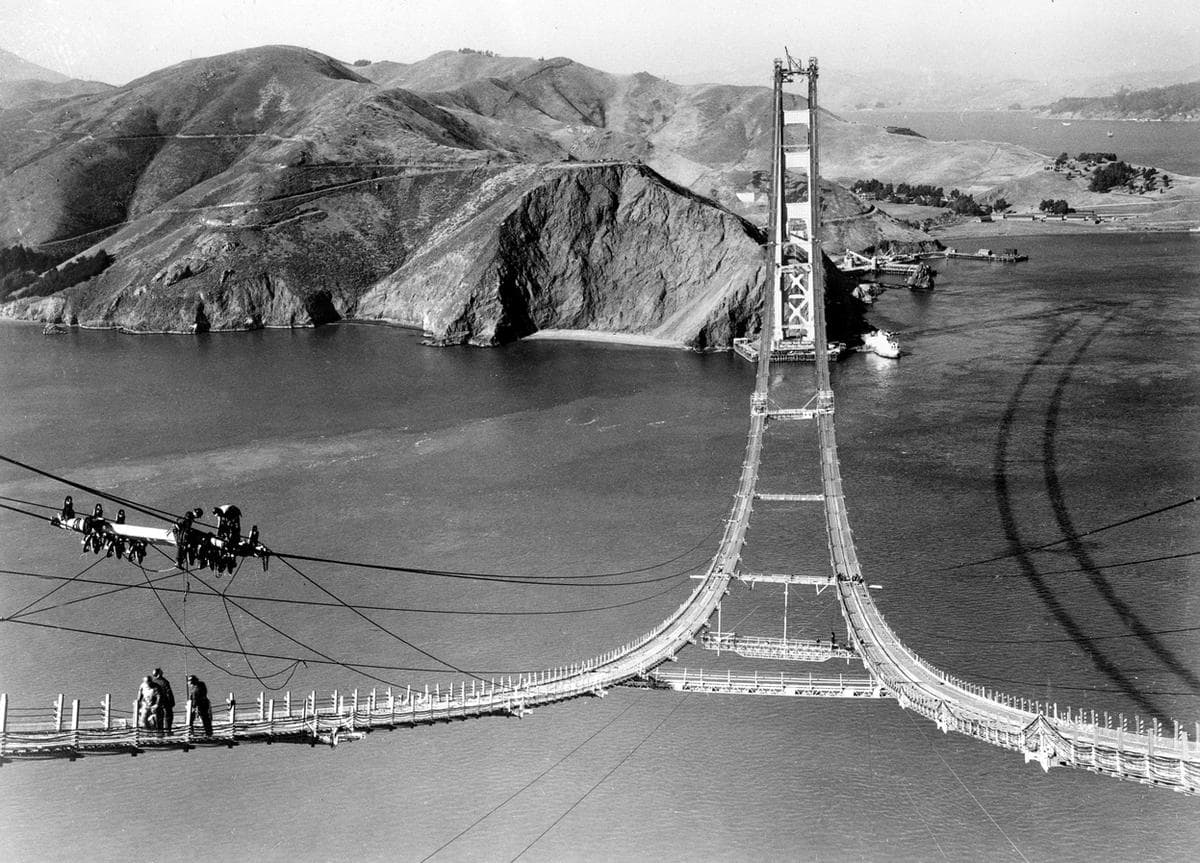 A mid-span working platform was then slid across. With this successfully achieved, the painstaking process of bundling and draping strands of wire back and forth across the bridge began.

Those at the top of towers worked for months in 45mph winds, 746 feet above the water. Despite the hostile environment, productivity was high and in one record-breaking shift a gang managed to spin 1,000 miles of wire across the strait.

"The cables used are in fact formed of 27,572 individual wires that total some 80,000 miles in length - enough to circle the globe three times"

As each wire crossed they were tightened at their opposing end, eventually forming the bridges two main cables, each 3 feet wide in diameter. Wooden pallets were then hung beneath the cables creating catwalk for workers to weave, compact and bond the wires before painting them to create a watertight seal.

With the main cables in place, smaller vertical cables were dropped down towards the water. Steel trusses were then attached to them, creating the deck for the concrete roadway to be poured on. 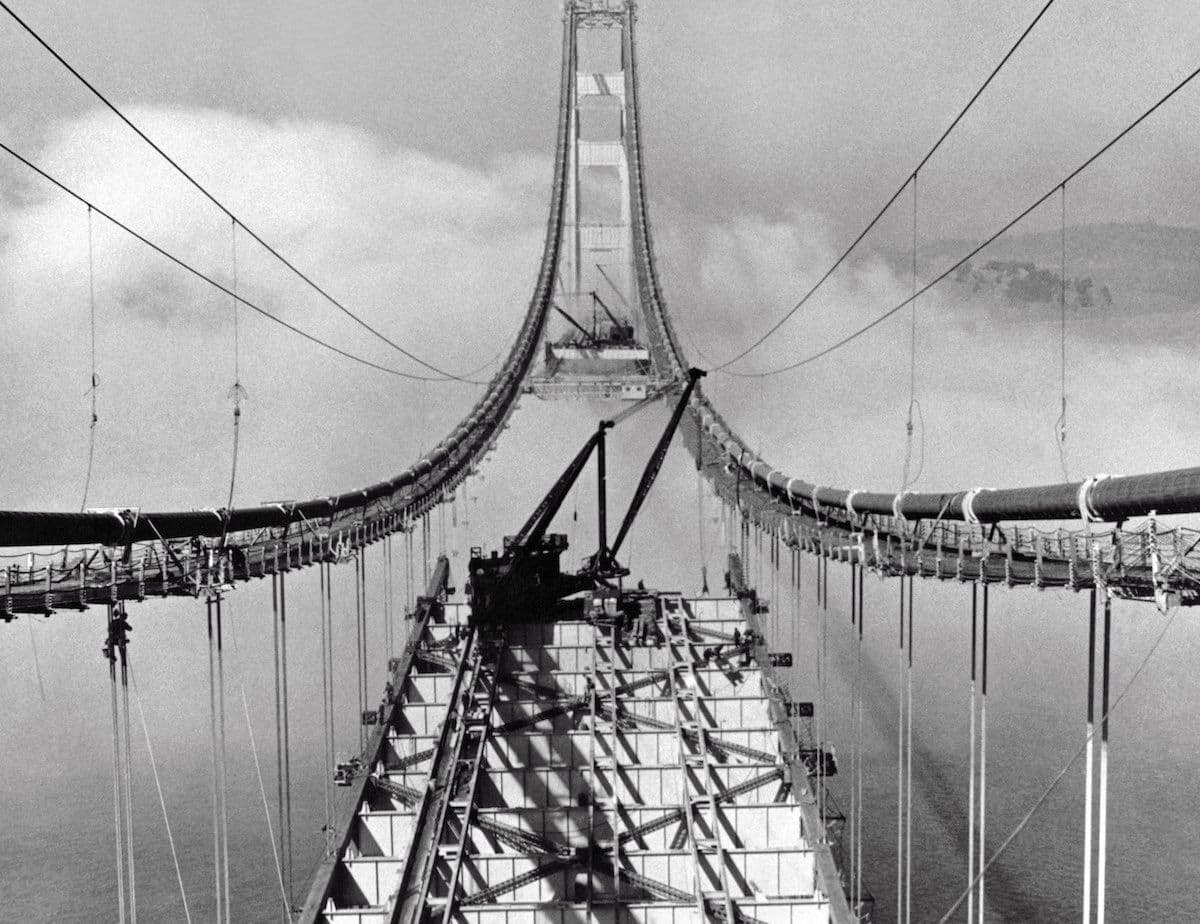 Above: The process of suspending the road deck from the cables (image courtesy of Underwood Archives and Getty Images).

Throughout the construction process, a number of workers fell from the bridge. A fall to the water from the road deck was fatal in most instances, as impact speeds reached 75mph. Thanks to a then-innovative safety net, many construction workers who fell were saved from hitting the water and became members of what was dubbed the “half-way to hell club”.

Tragedy struck in February 1937 when a paving machine fell into the net taking a number of workers with it. The net collapsed under the weight of the machinery and 10 people were killed in the incident.

In the early 1930’s, with the country in the grip of the great depression, the Golden Gate’s construction site was one of the top employers in the western United States. Desperation ran high amongst those who found themselves out of work, and some would even watch the construction site for workers falling to the water, before approaching the entrance gates to enquire about the ‘new job opening’. 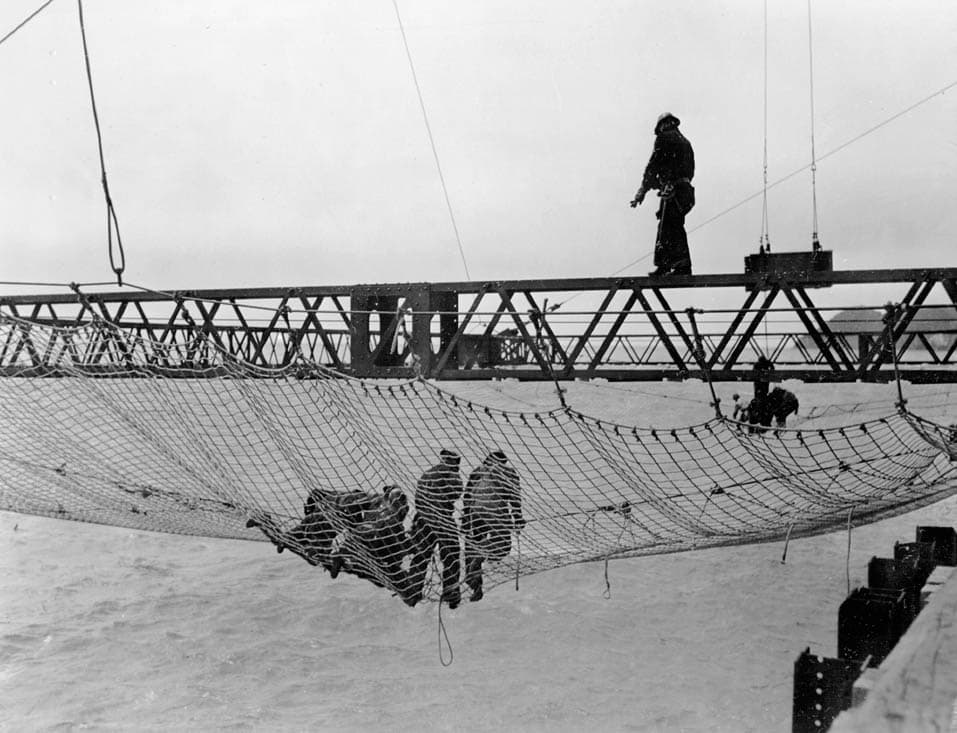 Above: A then-innovative safety net under the road deck saved many workers' lives (image courtesy of The Golden Gate Highway and Transportation Company).

As construction progressed, so too did the debate around what colour the bridge should be painted. It was the bridge’s orange steel primer that struck a chord with the public and suited the Department of War’s requirements for visibility. This shade is actually known as “international orange”, a stand-out tone that is also used on NASA astronauts and American footballs.

Just four years after construction work started – and with 600,000 steel rivets in place – the bridge was complete. It opened on 27 May 1937 with a pedestrian walk over day, cars following 24 hours later. 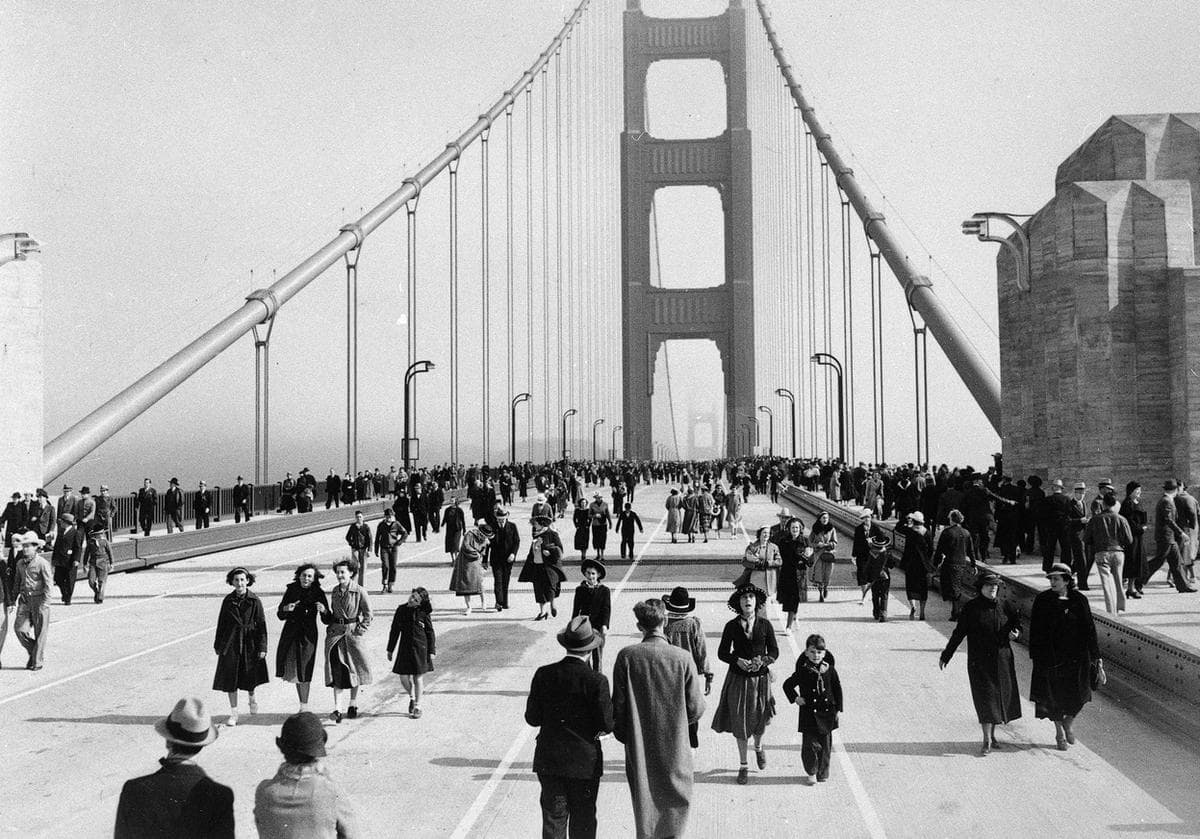 Above: Opening day, 27 May 1937 (image courtesy of Redwood Empire Association and AP).

Traffic was stopped and the walk over day repeated for the bridge’s 50th Anniversary in 1987. However, serious overcrowding occurred and the bridge deflected by 10 feet, flattening out under the weight of the crowd. This extremely dangerous incident has led officials to commemorate anniversaries in different ways ever since. 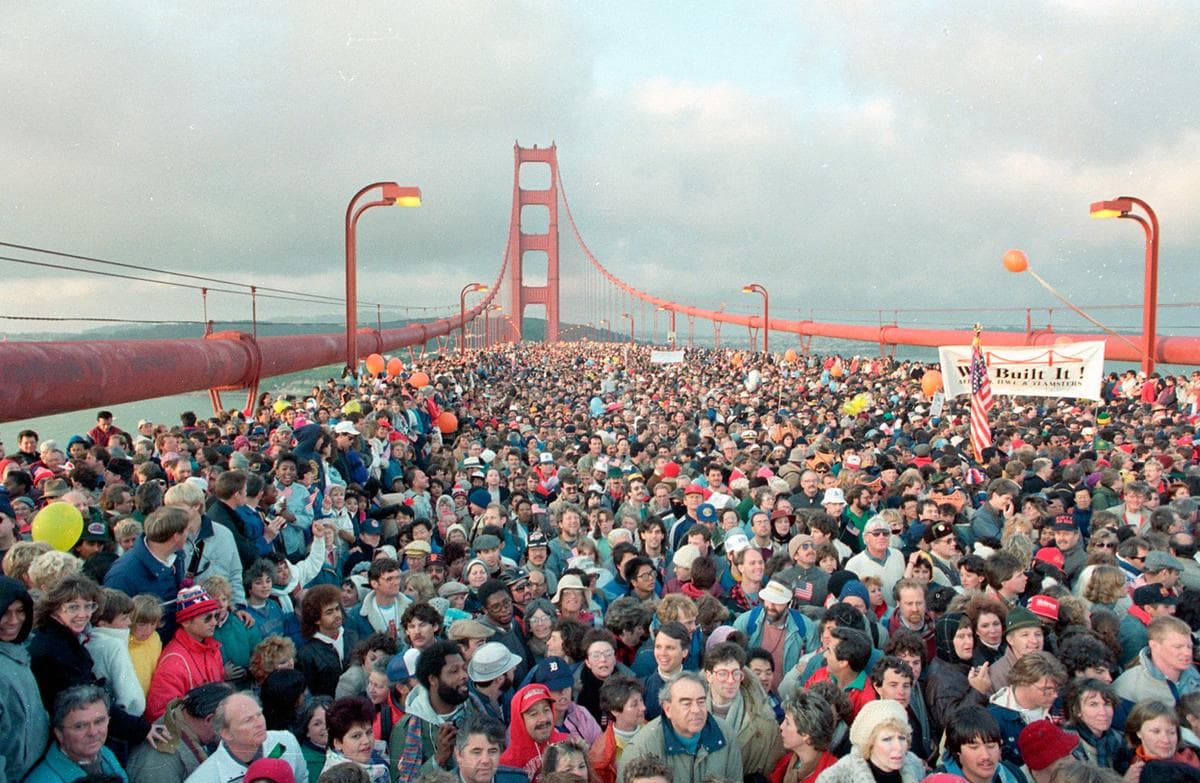 Above: The overcrowding incident that occurred during celebrations to mark the bridge's 50th anniversary in 1987 (image courtesy of Paul Sakuma and AP).

The bridge has been a huge cultural and economic success since its completion. Over 2 billion cars have now crossed the deck and the Golden Gate has gone on to become an American icon, synonymous with the city of San Francisco. Such status has led to increased security, particularly in the post-9/11 era.

Steps have also been taken to better protect the bridge from seismic activity, especially as technology and research in this area has moved on from 1930’s understanding. The bridge sits between the San Andreas and Hayward fault lines and is at risk of high-magnitude quakes. Energy dissipating devices have been subtlety retrofitted and the towers supporting the approach ramps have been completely replaced. 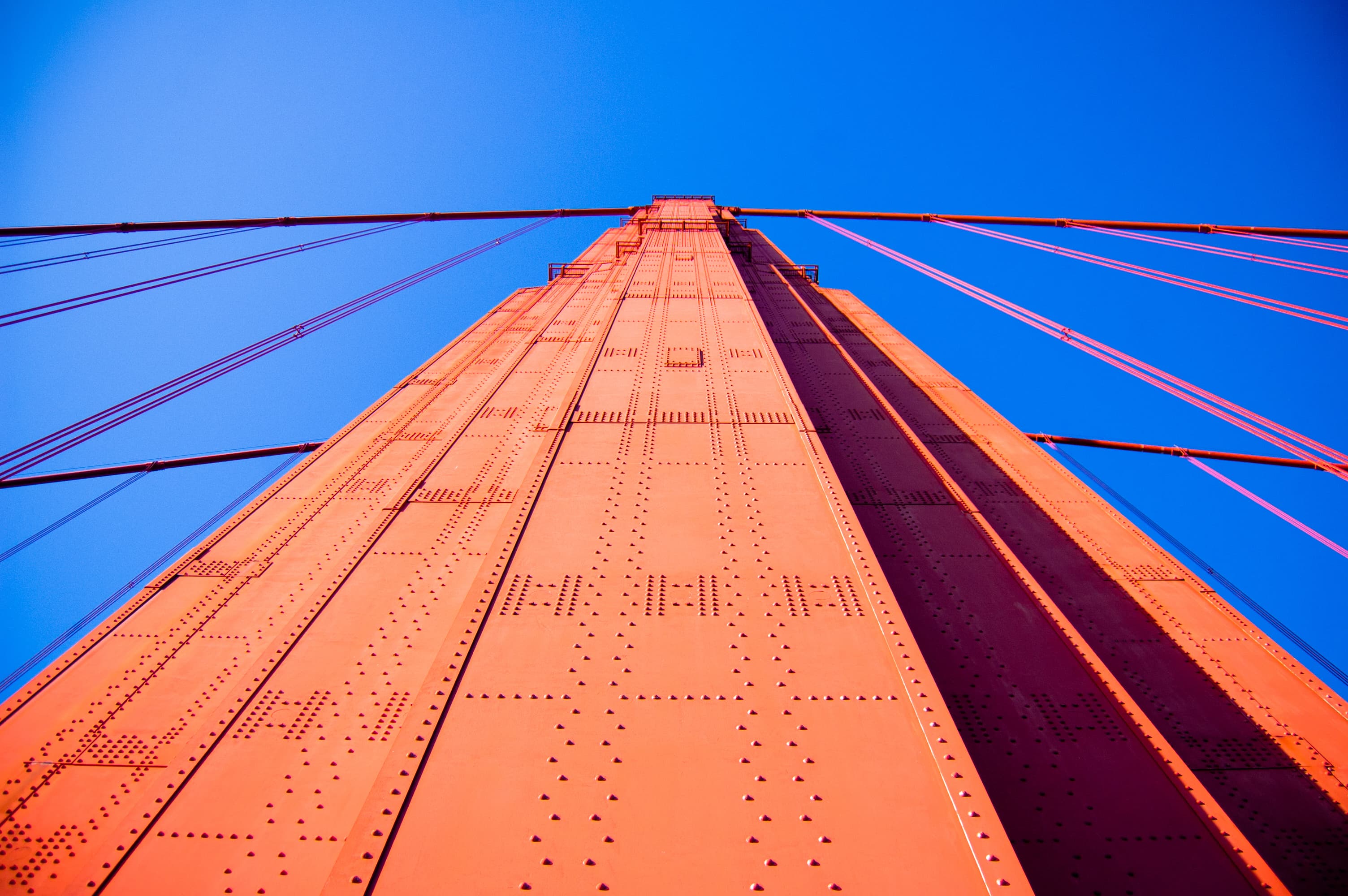 Above: Some of the bridge's 600,000 steel rivets. Below: The bridge suffers from corrosion in the oceanic air and is repainted on a regular basis (image courtesy of Justin Sullivan and AP). 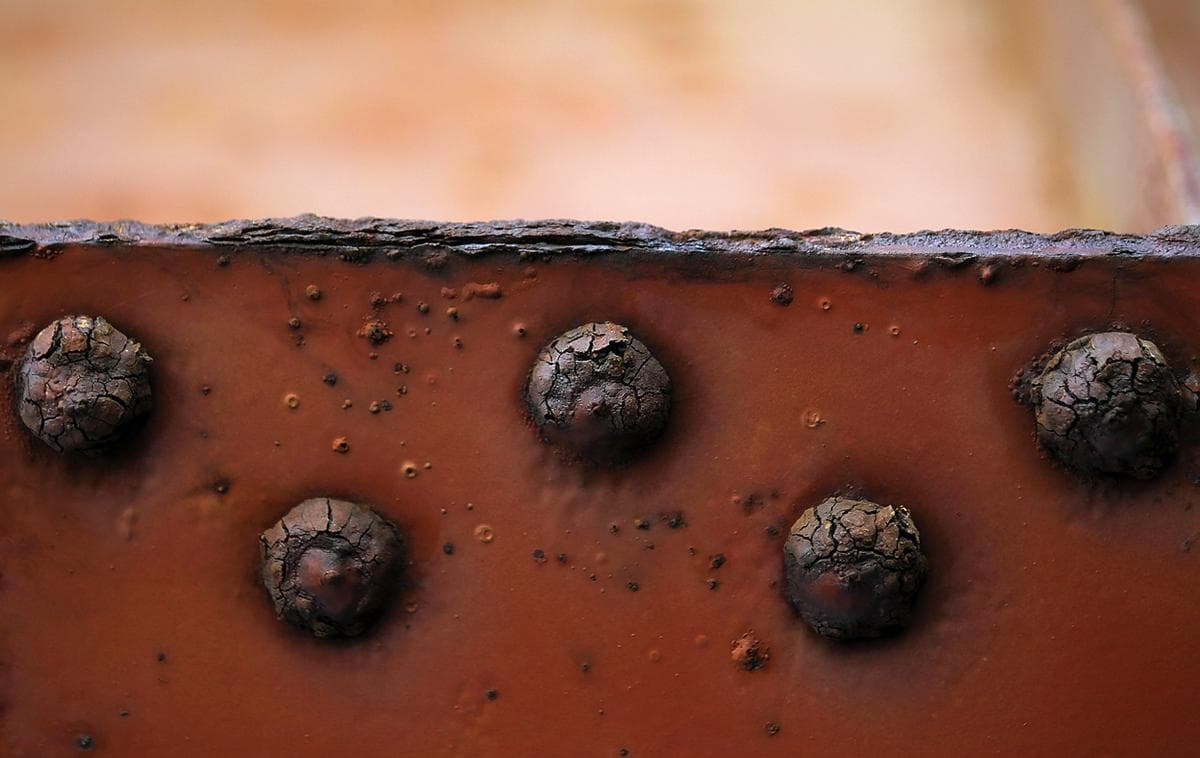 Maintenance of the bridge is an ongoing task and falls to a team of 110 full time personnel who look after every aspect. In maintenance terms, the bridge is very similar to an offshore oil platform; it must contend with ocean climates and the onslaught of the elements this entails. Re-painting is done by specific areas, based on corrosion monitoring whilst an onsite steel fabrication shop is able to create replacement components.

Larger scale refits have taken place, including a complete replacement of the suspension ropes in the 1970s and a new lighter steel road deck in the 1980s.

Now 80 years old, the bridge remains one of the single most important pieces of road infrastructure in the US. A key piece of cultural and construction heritage and an iconic symbol of what human engineers are truly capable of. 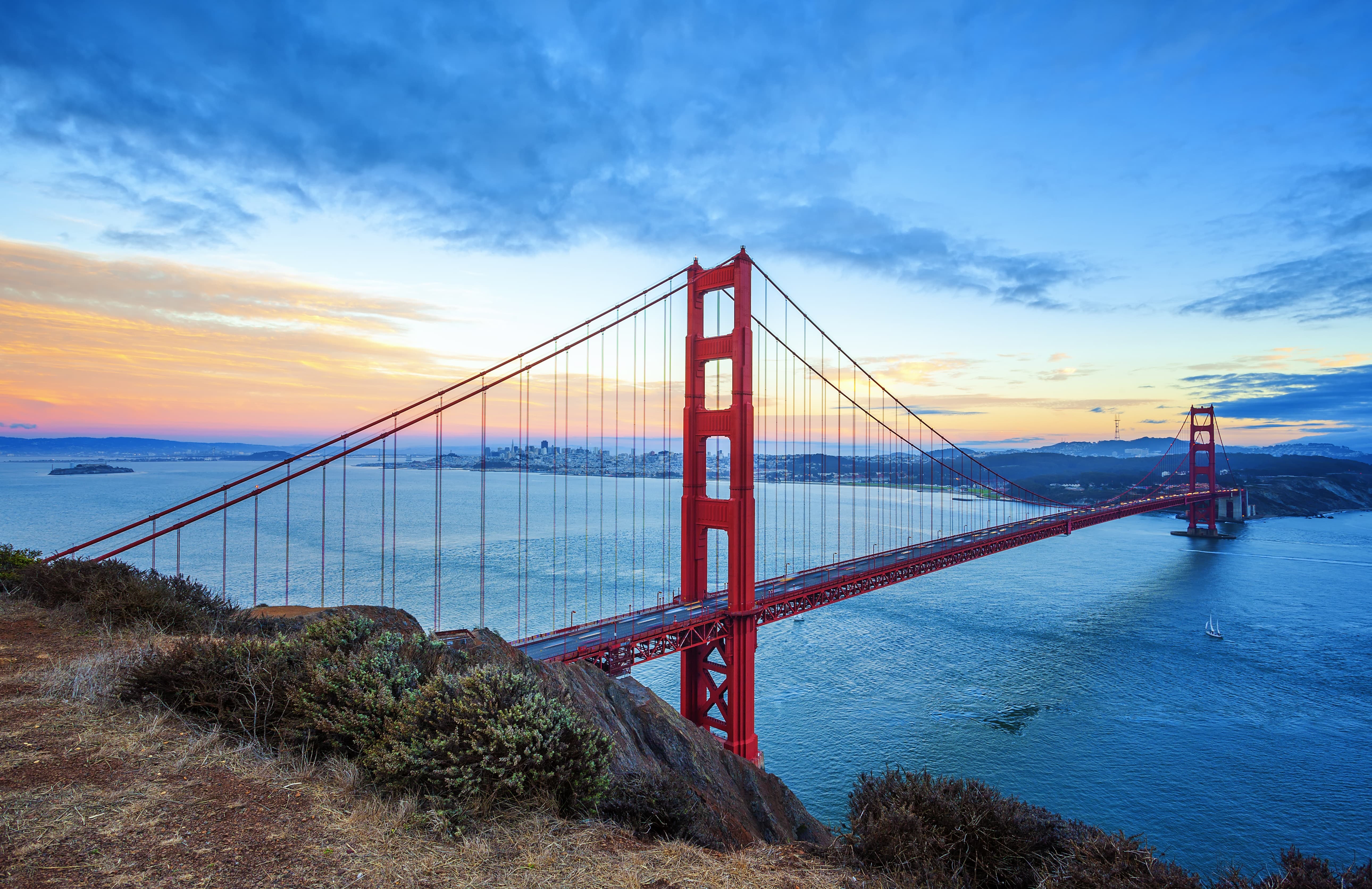 You can learn more about the bridge and its history, and even watch a live feed of the traffic moving across at GoldenGateBridge.org.