Used for power generation, water storage and flood control these vast structures play a critical role in the lives of billions, every day.

But with dams positioned far from our cities and with their metrics becoming harder to fathom the larger they get, the real size of these structures often goes unappreciated by the people they serve.

To correct this, we have compared the largest dams with well-known buildings (and Jean-Claude Van Damme) to show their true scale.

Unlike skyscrapers, stadiums or bridges, the term “dam” covers a wide range of designs, sizes and functions that encompasses more than 800,000 structures worldwide.

While this makes defining a single structure as the world’s largest dam near impossible, a number of key metrics can be used to rank these incredible feats of engineering.

Located in China’s Sichuan province, Jinping-I broke records in 2014 when it became the tallest dam ever constructed.

The 305-metre structure is just one metre shorter than London’s Shard and holds back 7.7 billion cubic metres of water, enough to submerge all of Manhattan in a 131-metre-deep flood. 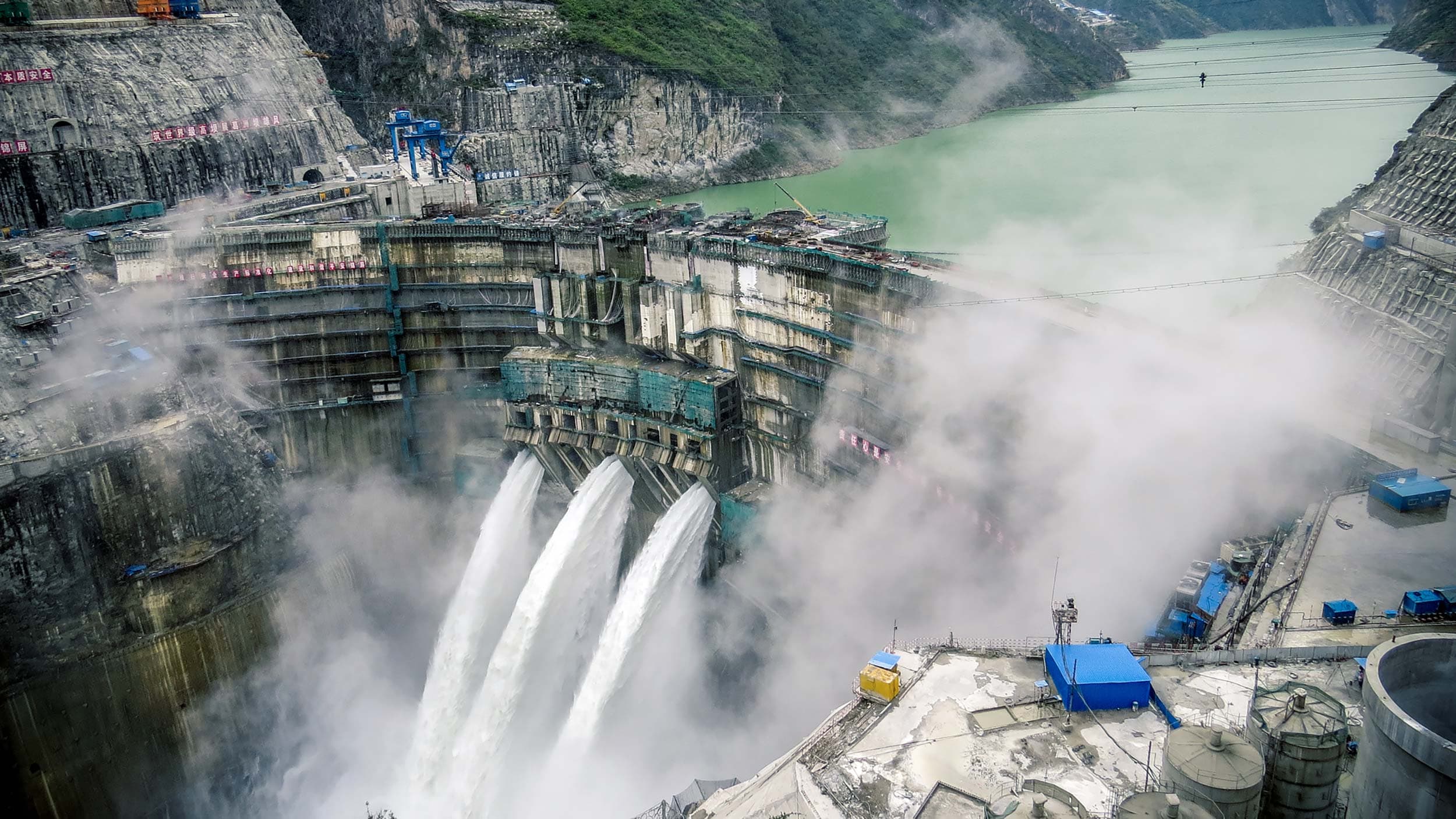 Above and Below: Jinping-I stands 305 metres tall and holds back enough water to cover Manhattan in a 131-metre deep flood (images courtesy of Shihan Shan and Google Earth). 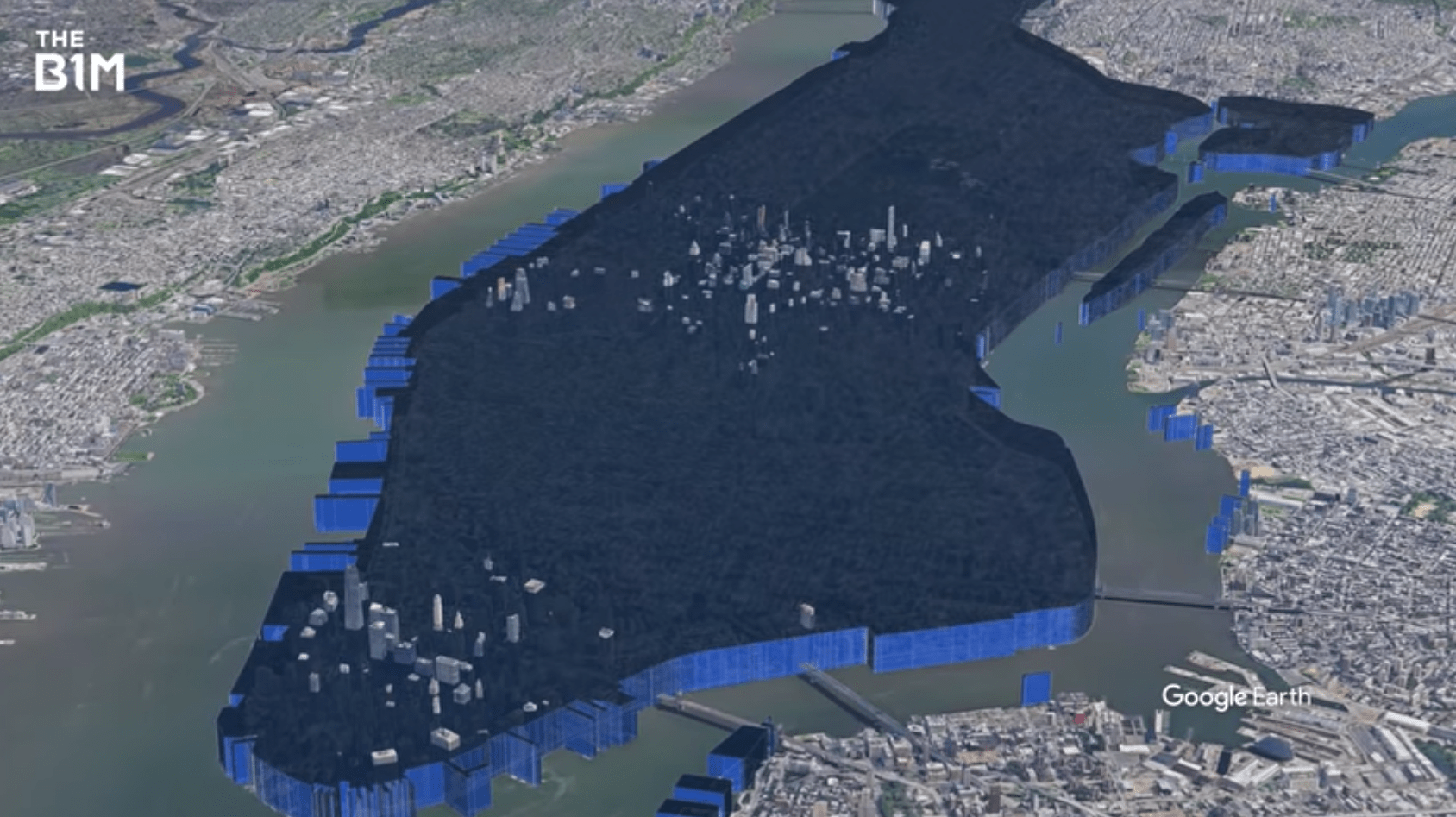 With the 314-metre Shuangjiankou Dam in China and 325-metre Bakhtiari Dam in Iran both currently under construction, Jinping-I’s reign as the world’s tallest dam will soon come to an end.

Built to create jobs during the great depression of the 1930s and to boost the development of American south-west, the Hoover Dam was a true titan of its time.

Towering 221-metres above the canyon floor, the vast structure stood taller than all but six of the country’s tallest skyscrapers at the time and took 3.3 million cubic metres of concrete to construct, enough to pave a 4,000-kilometre highway from San Francisco to New York City. 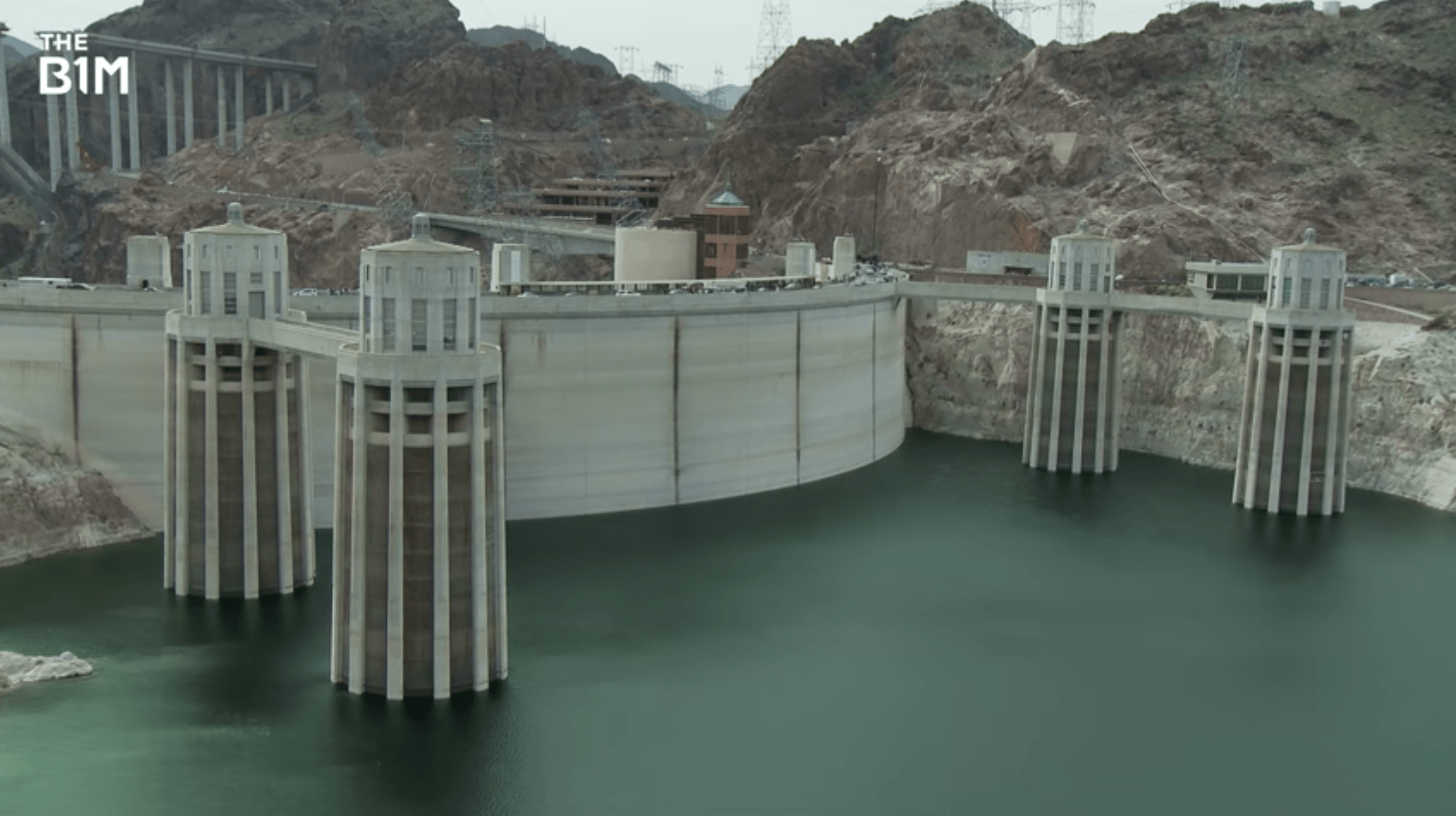 Above and Below: Holding back Lake Mead, the Hoover Dam was one of the tallest man-made structures in North America at the time of its completion (images courtesy of SkyscraperPage).

Holding back the mighty Colorado River, the Hoover Dam created Lake Mead, the largest reservoir in the United States to this day.

Holding back just over 40 cubic kilometres of water when it was first filled - enough to fill Sydney Harbour 80 times over - the capacity of the reservoir has reduced over time due to the accumulation of sediment deposits and its capacity now sits at 35.7 cubic kilometres.

With an ongoing drought and increased water demand, Lake Mead currently sits at just 43% of its full capacity and Lake Powell, the second-largest reservoir in the United States, has held more water since 2013.

Though concrete dams are big, embankment dams - typically made from rock and compacted earth - take size to the extreme.

Located on the Indus River in Pakistan, the Tarbela Dam has the largest structural volume of any dam ever constructed and needed 153 million cubic metres of material - enough to cover the entire country of Monaco to a depth of 75 metres. 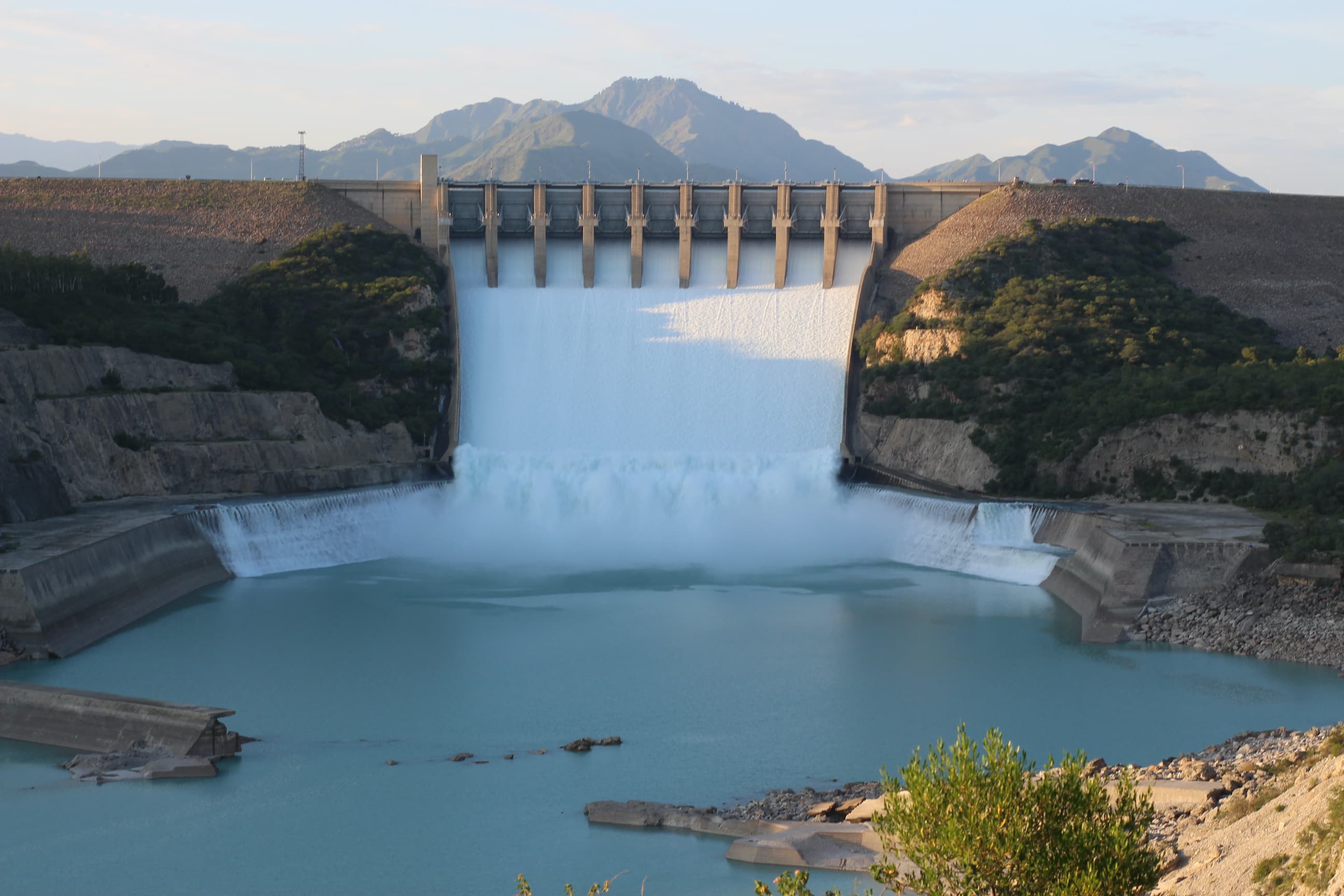 Above: Tarbela Dam required more material to construct than any other but holds back less water than Hoover Dam.

Despite this accolade, the Tarbela Dam ranks surprisingly low in other metrics. The volume of water contained in its reservoir is just over one-third of that in Lake Mead and its maximum energy output is just over a quarter of the largest hydroelectric dam on the planet.

With many of these structures used as hydroelectric power plants, a dam’s installed capacity - or the combined output of all its generators - is widely used as the measurement for ranking dams.

By this metric, the Three Gorges Dam in central China has been the world’s largest since 2012 with 34 turbines and an installed capacity of 22,500 MW.

Rising 181-metres and stretching for more than 2,300 metres across the Yangtze River, the structure is as long as three Burj Khalifa’s laid end-to-end - or 1,352 Jean Claude Van Dammes. 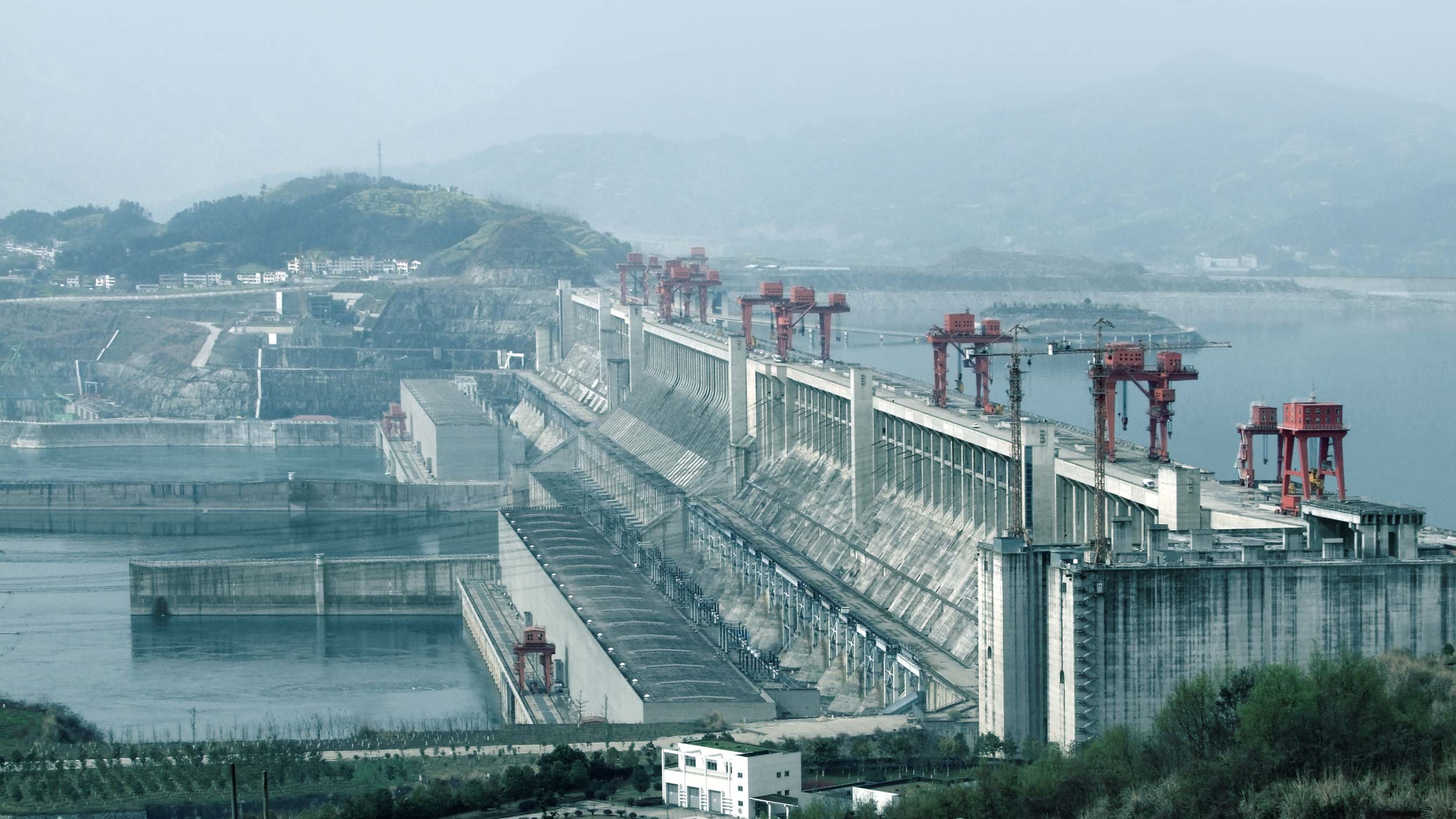 Above: The Three Gorges Dam produces more power than any other hydroelectric dam in the world (image courtesy of Shihan Shan).

The structure took more than 16 million cubic metres of concrete to complete - enough to construct five Hoover Dams - and now holds back more than 39 cubic kilometres of water.

NASA calculated that the mass contained in the dam’s reservoir actually slowed the Earth’s rotation by 0.06 microseconds.

While the Three Gorges Dam pushed engineering to the extreme, the demands of our developing world and the needs of its ever-expanding population mean it’s only a matter of time before an even larger dam is built.

We welcome you sharing our content to inspire others, but please be nice and play by our dam rules.