AFTER ALMOST seven years of preparation, Tokyo is about to light the torch for the 2020 Olympic Games.

The city’s first hosting of the event in 1964 was described as “a turning point for Japan” that set “a dazzlingly high bar”, so now that the 2020 Games are almost upon us, what has Tokyo done to ensure it reaches – let alone surpasses – its own sky-high standards set more than half a century ago?

From striking aquatic centres to billion-dollar timber stadiums, this is how Japan’s capital has transformed itself ahead of the greatest sporting event on Earth.

In the 1960s, when Tokyo became the first Asian city to host the Games, it stunned many by pulling off a total transformation less than two decades after the end of Second World War; a feat which would go on to help drive the country’s rapid economic growth in the mid-20th century.

Some estimates suggest that Japan spent the equivalent of its entire national budget on the building programme for the 1964 Games, and the country used the event as a platform to showcase innovations to a global audience, including the revolutionary Shinkansen bullet train.

Technology and construction play a key role again in 2020.

The Athletes’ Village has been built on an artificial island where residences are powered by hydrogen energy and buses will run on fuel cells to transport athletes across the site. 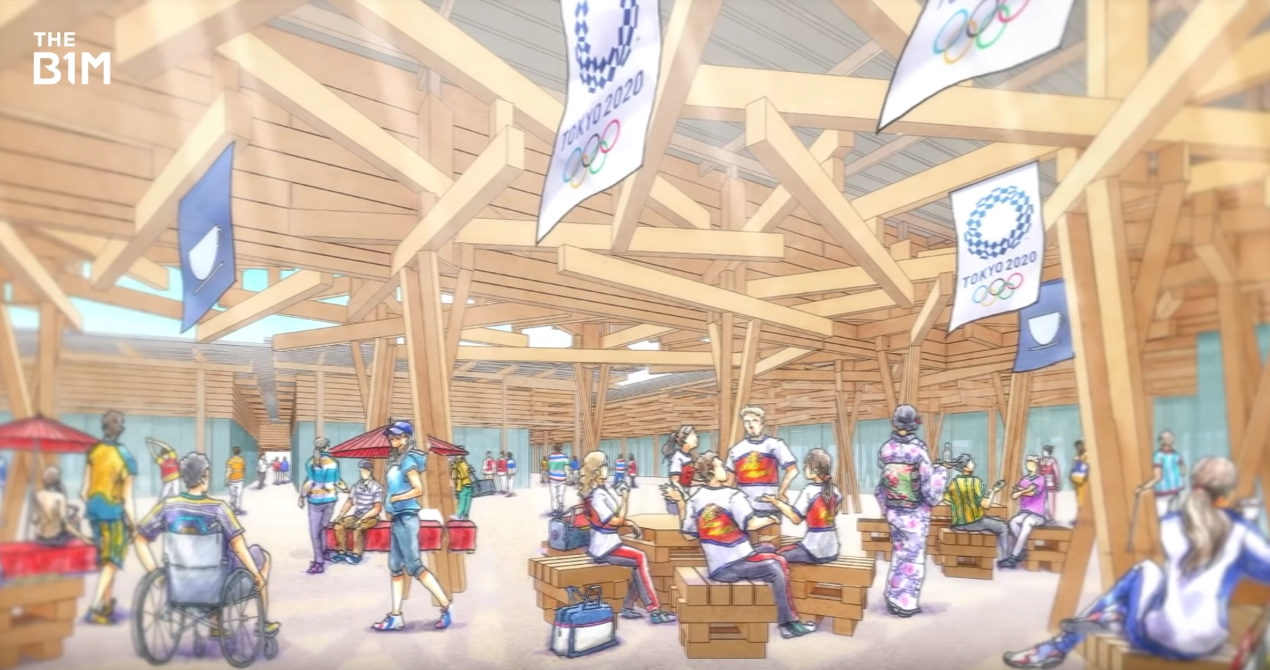 Above: Sustainability and environmental consciousness are central themes of the Games (image of Athletes Village Plaza courtesy of Tokyo 2020).

Self-generating energy sources will be in use at 37 of the 38 venues, including solar power systems and geothermal heating and cooling technology.

As well as taking the unusual step of reusing several legacy venues – leading to Tokyo 2020 being dubbed “The Reconstruction Games” – eight state-of-the-art new venues have been built from scratch.

Built on exactly the same footprint as the original 1964 flagship venue, Tokyo’s new 68,000-seat National Stadium will be the setting for the Opening and Closing Ceremonies, as well as athletics events and football matches.

At a cost of USD $1.4 billion, the stadium was designed by Kengo Kuma, best known for his use of natural materials.

The oval-shaped building provides seats across three tiers and blends steel with layers of latticed wood gathered from all 47 of Japan’s prefectures. 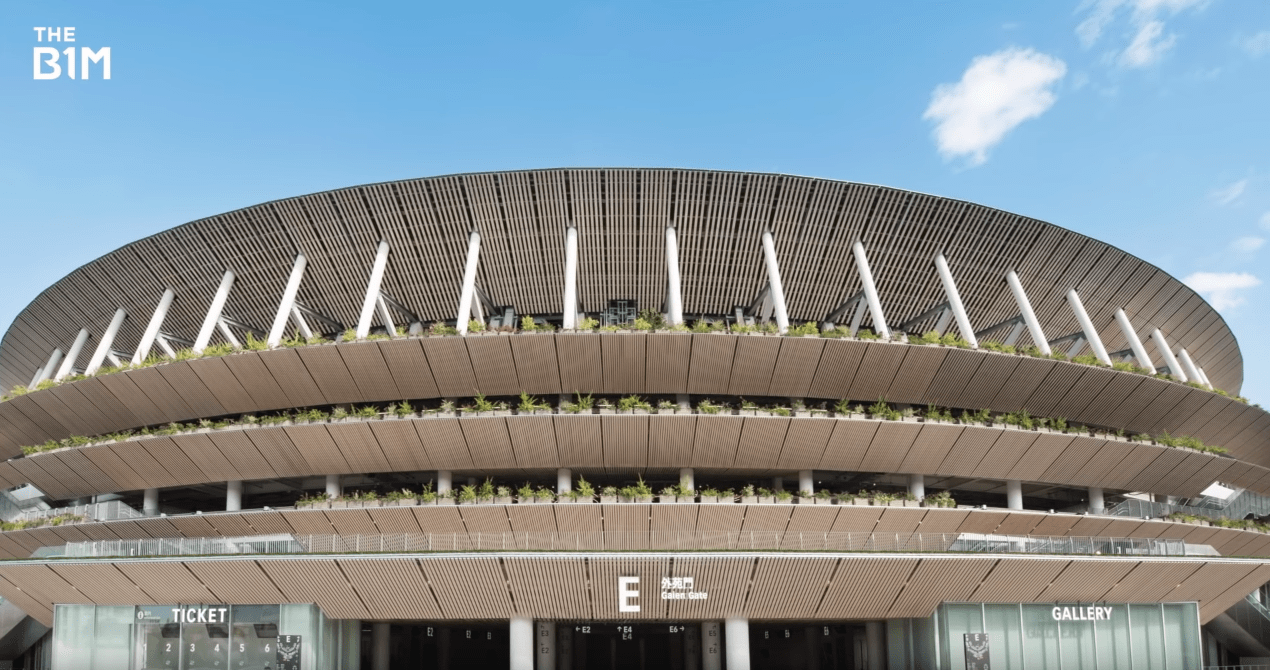 Above: The design for the stadium was inspired by Japanese architecture and the environment (image courtesy of Japan Sport Council).

But the project has faced criticism from several organisations who question the venue’s sustainable design.

Among the accusations are claims that tropical plywood from Indonesia and Malaysia were used during construction, damaging the rainforests.

Before any of the controversy on this structure, the previous design proposal also ran into difficulties. Zaha Hadid Architects (ZHA) originally designed the venue and had its proposals accepted - but the scheme was scrapped by the Japanese government in 2015 over rising costs.

Taking three years to build, Kuma’s stadium was completed in November 2019, eight months ahead of the Games.

The four-storey Tokyo Aquatics Centre is another new build highlight.

Its 7,000-tonne, ten-metre-thick roof was constructed before the rest of the structure was developed around it, improving worker safety while saving time and money. 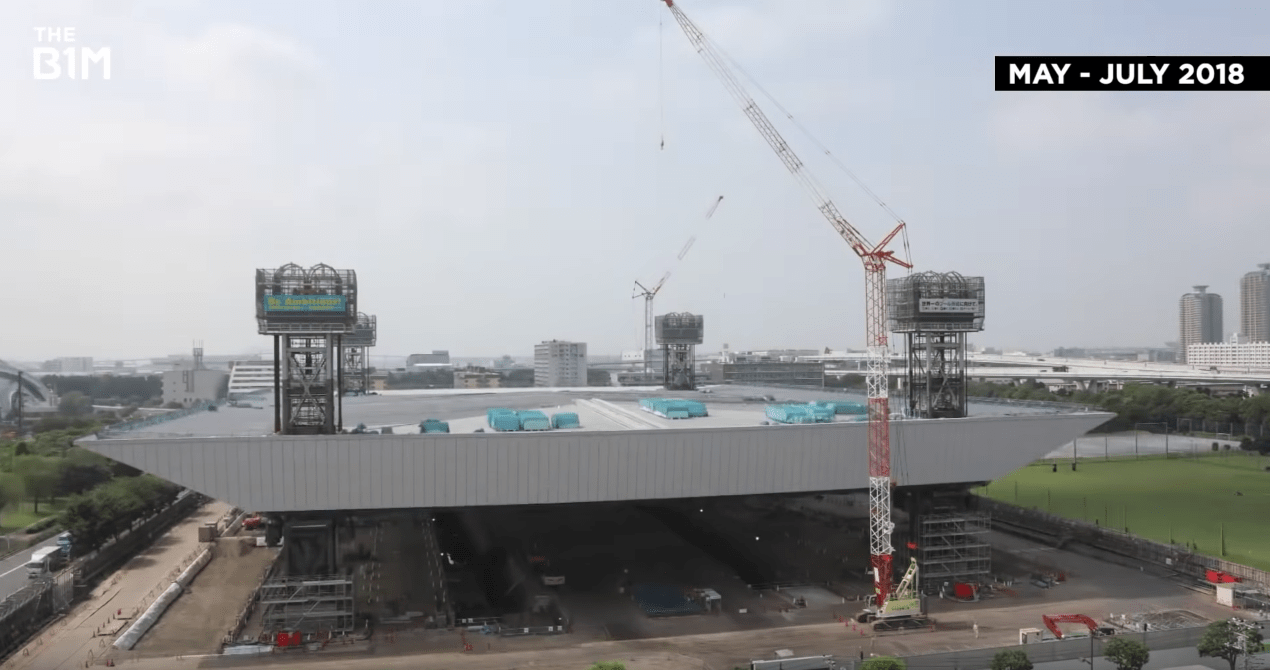 Above: The roof, supported by four core pillars, was raised to a height of 37 metres in three stages (image courtesy of Tokyo Metropolitan Government).

The main 50-metre pool is equipped with a movable wall, allowing it to be converted into two 25-metre pools if required, while the depth is also adjustable.

One of the last venues to complete before the tournament begins, the centre cost more than half a billion US dollars but is set to see plenty of use after the Olympics, with more than a million visitors expected to swim in it each year.

Timber architecture features prominently at the 2020 Games, and the new Ariake Gymnastics Center – built on a site previously used for timber storage – is one of the leading examples.

Intended as a showcase to Japanese craftsmanship, the venue has a 120-metre-long arched timber roof – the largest of its kind in the world. 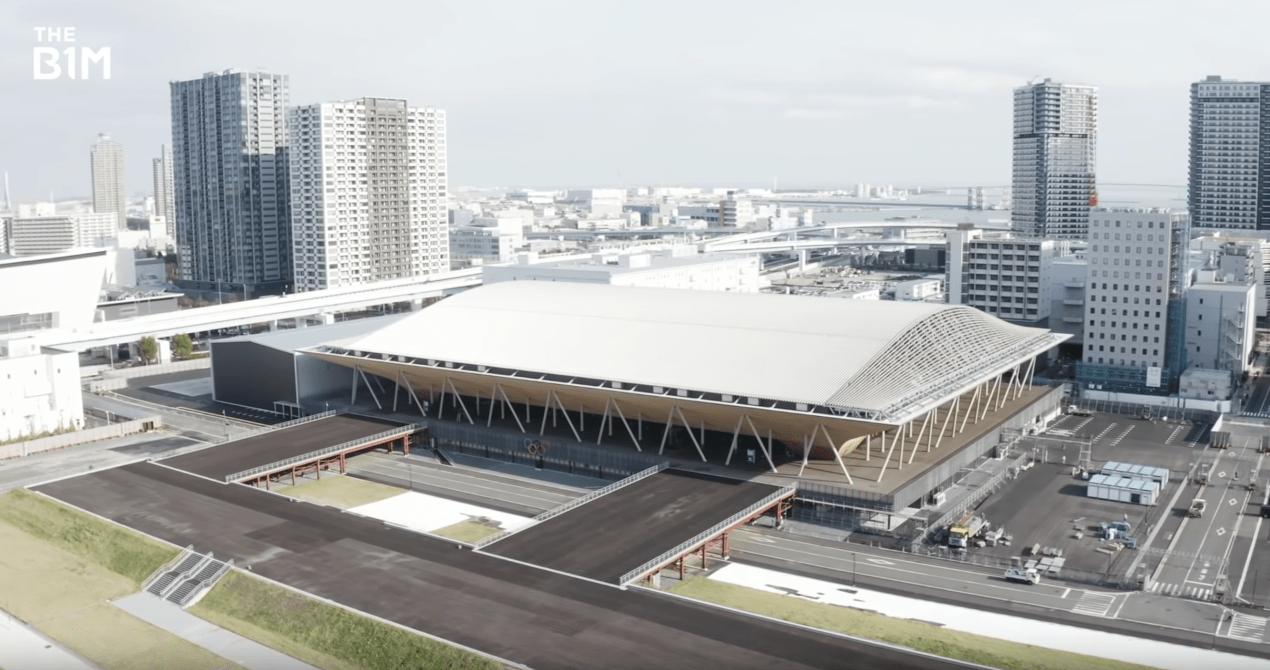 Above: Its slanted walls are influenced by the ‘engawa’ verandas found in traditional Japanese homes (image courtesy of Tokyo 2020).

The roof beams and seating are also made of timber, while the lack of steel framework creates a large open space in the centre with uninterrupted views for spectators.

Perhaps the most iconic building still in operation from the first Games, the Yoyogi National Stadium was originally constructed to host aquatic and basketball competitions in 1964. In 2020, it will be used for handball.

Its main structure takes the form of two sweeping curves that flow out from central supports like drapes. 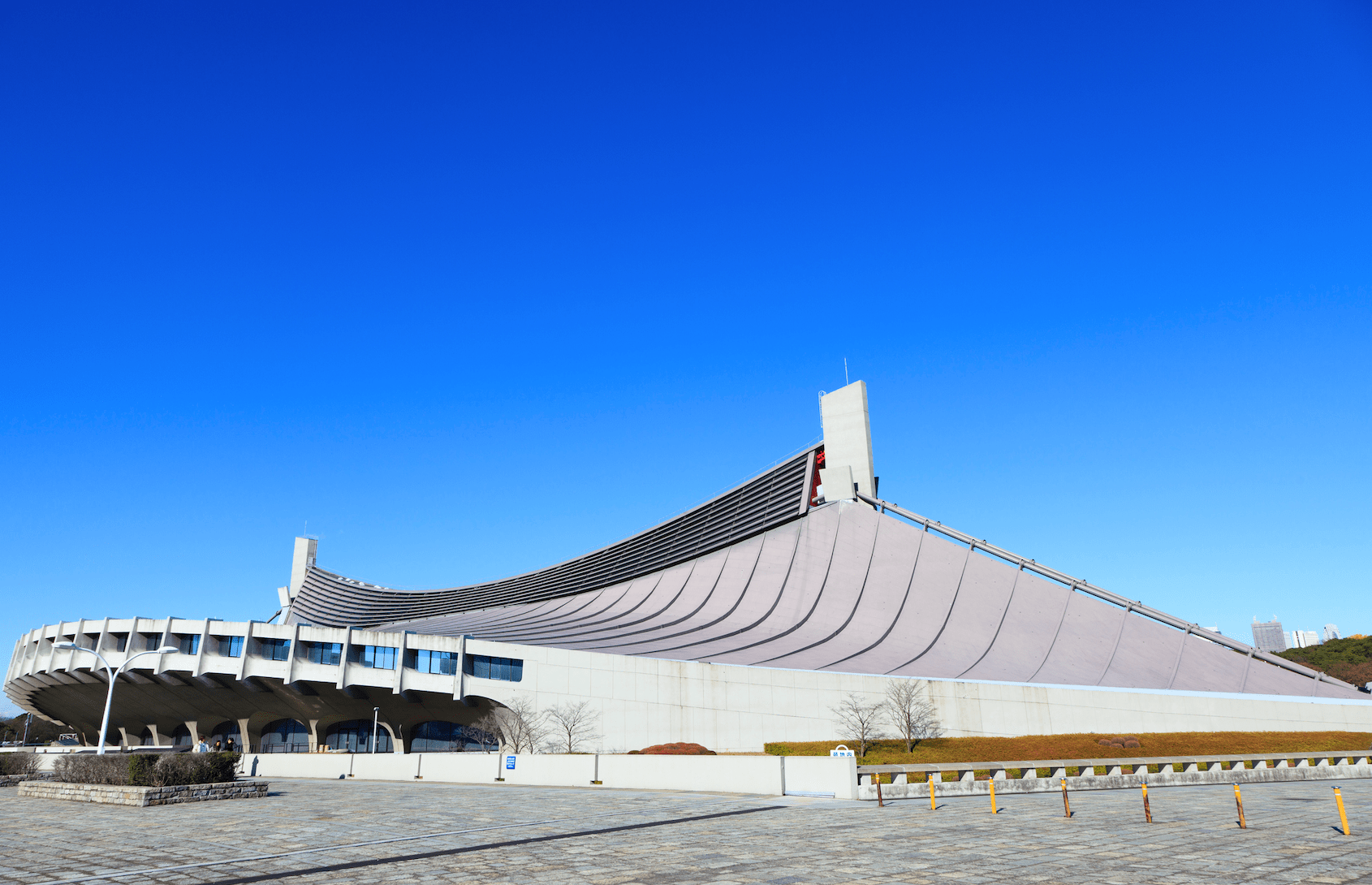 Above: The venue is famous for its unique suspension roof and distinctive architecture.

For Tokyo 2020, Yoyogi has been refurbished to enhance its earthquake resistance and improve access for the 10,000-plus spectators that are expected.

Another legacy venue from 1964, the Nippon Budokan is the spiritual home of Japanese martial arts.

The Budokan is where judo made its debut at the Olympics. It will host the sport again in 2020 and is set to be the launchpad for another new Olympic event – karate. 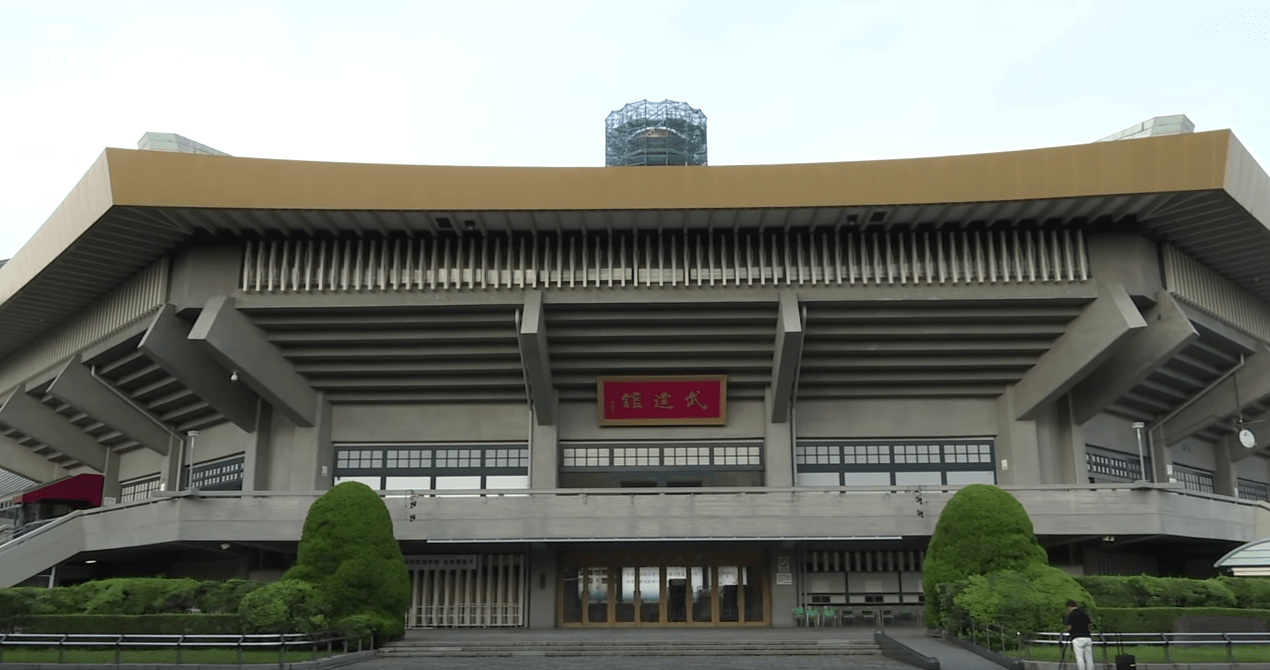 Above: The building has also become an iconic music venue; the setting for memorable gigs from the likes of Bob Dylan and The Beatles ( image courtesy of Tokyo 2020).

Its roof is shaped to resemble Mount Fuji, while its octagonal perimeter is based on the Yumedono Hall of the Horyuji Buddhist Temple – the oldest wooden building in the world.

Excitement around the Tokyo 2020 Games is now seriously beginning to build.

Venues have been completed well in advance, early ticket sales have been strong and a budget that at one point looked like it might spin out of control has been kept under USD $10 billion. For context, the 2008 Olympics in Beijing cost USD $40 billion.