In an effort to create a more pleasant, healthier and sustainable built environment, architects, engineers and developers are creating increasingly greener buildings - and doing it in a more literal way than ever before.

Buildings with trees are actually nothing new. The mythical Hanging Gardens of Babylon are often imagined as a stepped palace of terraces containing numerous trees, shrubs and exotic flowers.

Although no such building was found during excavations in Mesopotamia and its existence has been subject to much debate, artists have kept this imagery alive in their paintings throughout the centuries. 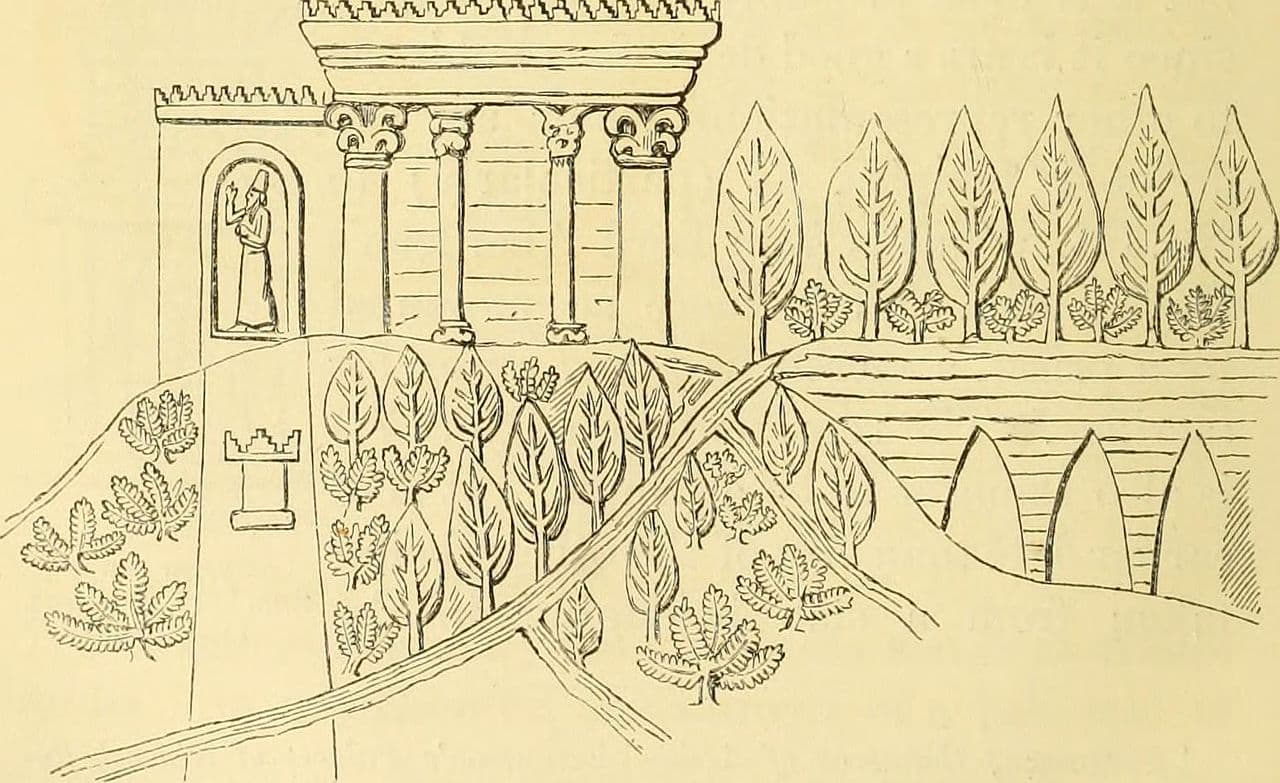 Above: A trace of an ancient carving showing the mythical Hanging Gardens of Babylon.

The current revival of green architecture began in the 1970s, when the energy crisis, coupled with growing awareness of humankind’s impact on the environment, propelled architects and engineers to think more carefully about sustainable development.

Although there are many different ways to approach sustainable building design, an increasing number of architects and engineers began to incorporate green roofs and other energy saving measures into their projects. 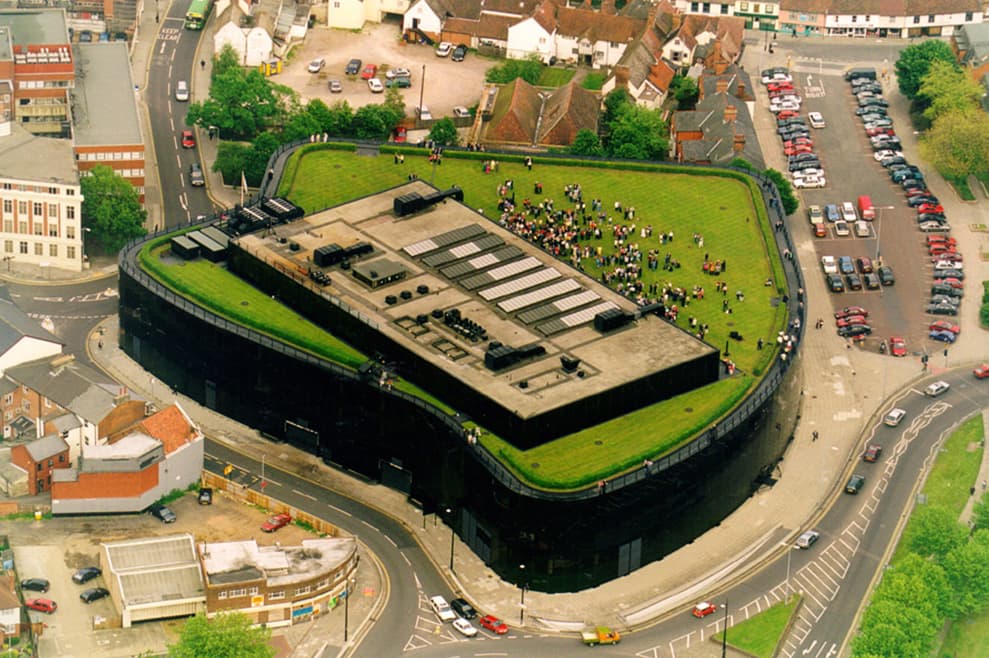 A prominent example of this is the Willis Faber and Dumas Headquarters (now called the Willis Building) in Ipswich in the United Kingdom (UK), designed by Sir Norman Foster and completed in 1975.

The building features a reflective double-leaf facade together with a grass-covered roof which could be used as breakout space for the firm’s employees. 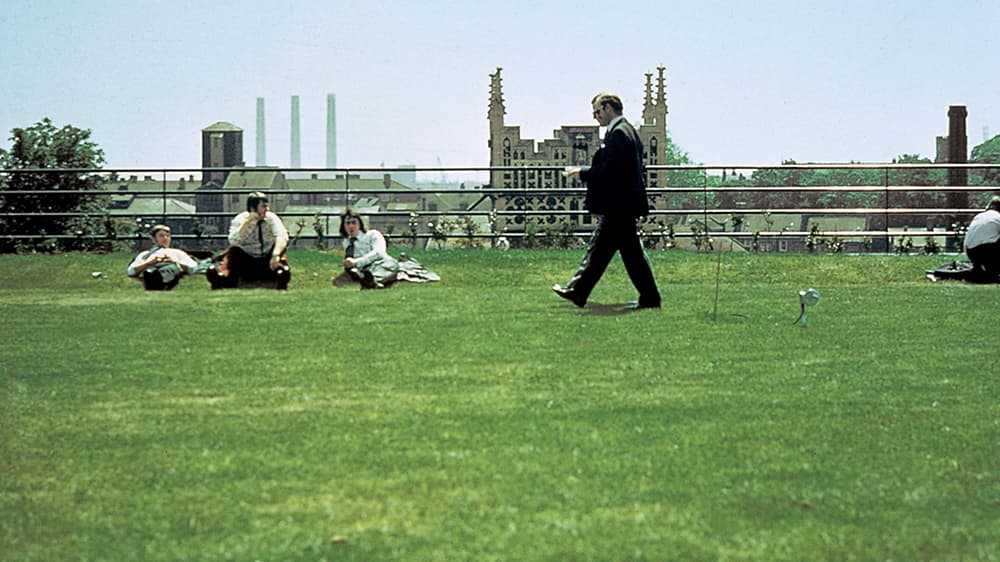 Above: The green roof of the Willis Building serves as a breakout space for the office workers (image courtesy of Foster + Partners).

Other approaches advocate integrating trees and plants within buildings, often to soften the psychological impact of living in modern cities.

One of the most idiosyncratic proponents of this approach was Austrian artist Friedensreich Hundertwasser.

Working in Vienna and elsewhere across his native country, he designed an apartment building and a number of hotels throughout the 1980s and 1990s incorporating mature trees. 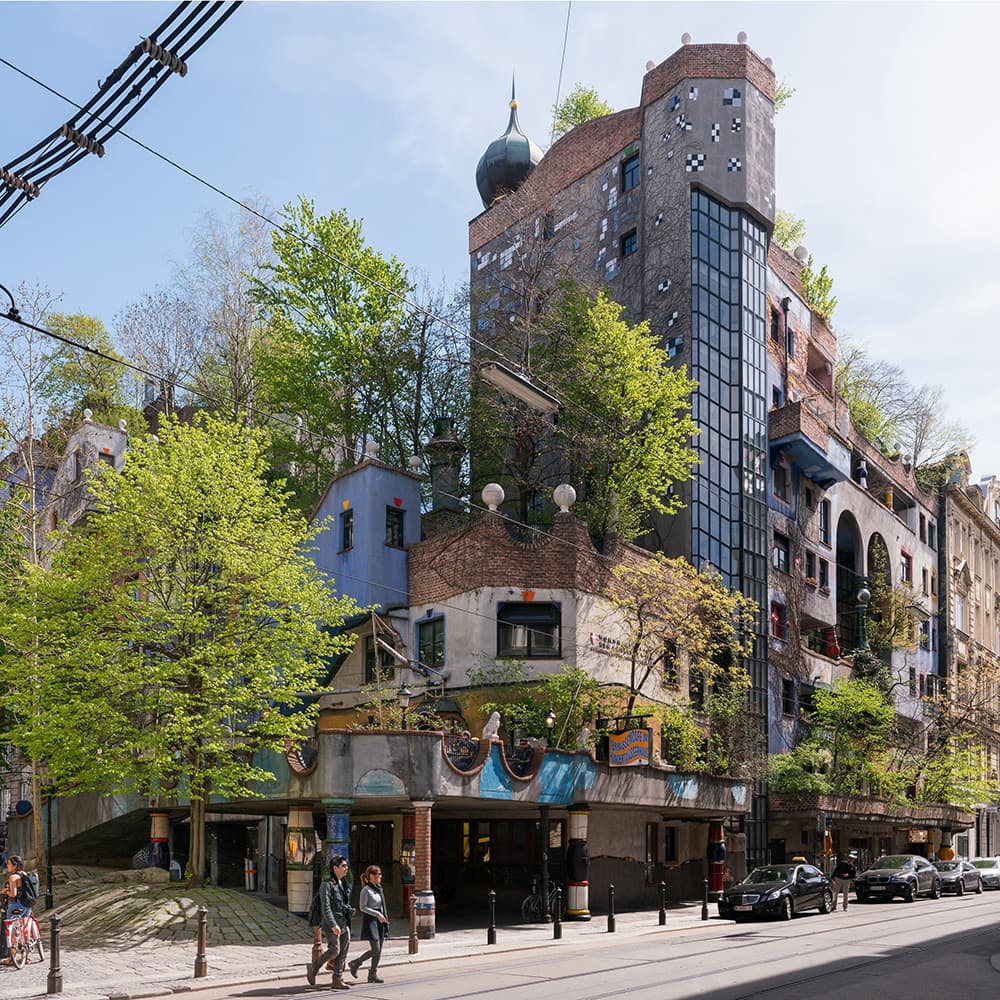 Above: Austrian artist Hundertwasser believed trees could soften the psychological impact of living in cities (image courtesy of Thomas Lendl).

Since then, research has demonstrated that green space can have a substantial physical and psychological impact on our urban environments. 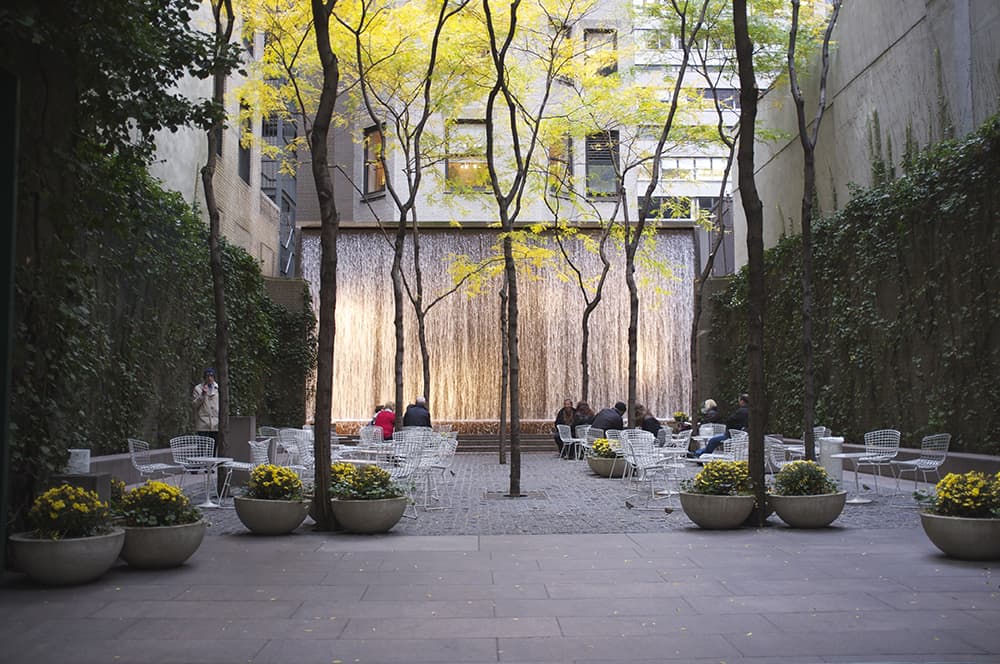 Above: Introducing greenery into urban spaces can reduce surface temperatures during hot weather and help to filter out toxins ( image courtesy of  Aleksandr Zykov).

The benefits of temperature regulation can also be found in deciduous trees, which offer passive solar shading in the summer, while allowing the sun’s rays to penetrate deep into a building’s floor plan during winter months.

Trees can also reduce the amount of exhaust gases and particles in the air, with some studies claiming that trees can help reduce local concentrations of nitrogen oxide by up to 57%.

Aside from their physical impact, there is powerful evidence that the inclusion of plants within our built environment can deliver psychological benefits too. 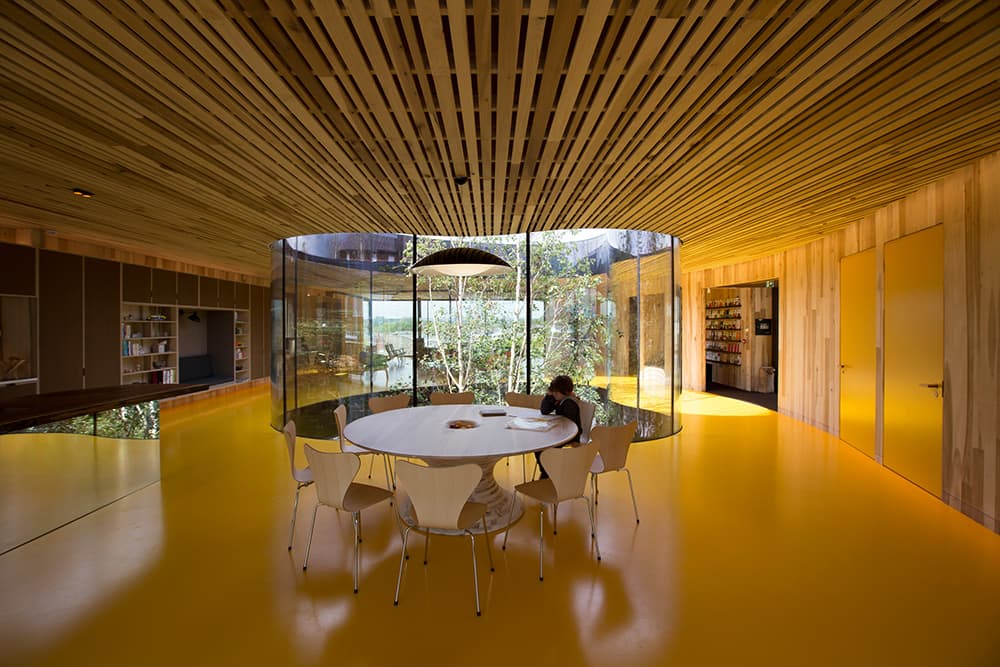 Above: Maggie's Centre in Oldham, UK, integrates trees within its central courtyard (image courtesy of DRMM).

Hospital patients with views of green spaces have had faster recovery times and plants have been shown to reduce stress amongst office workers, which in turn increases their productivity.

This can often lead to extensive planting being added to existing structures, either as a way to replace lost habitats or decrease urban island heat effect, or to create green spaces for the benefit of people living and working in dense urban areas. 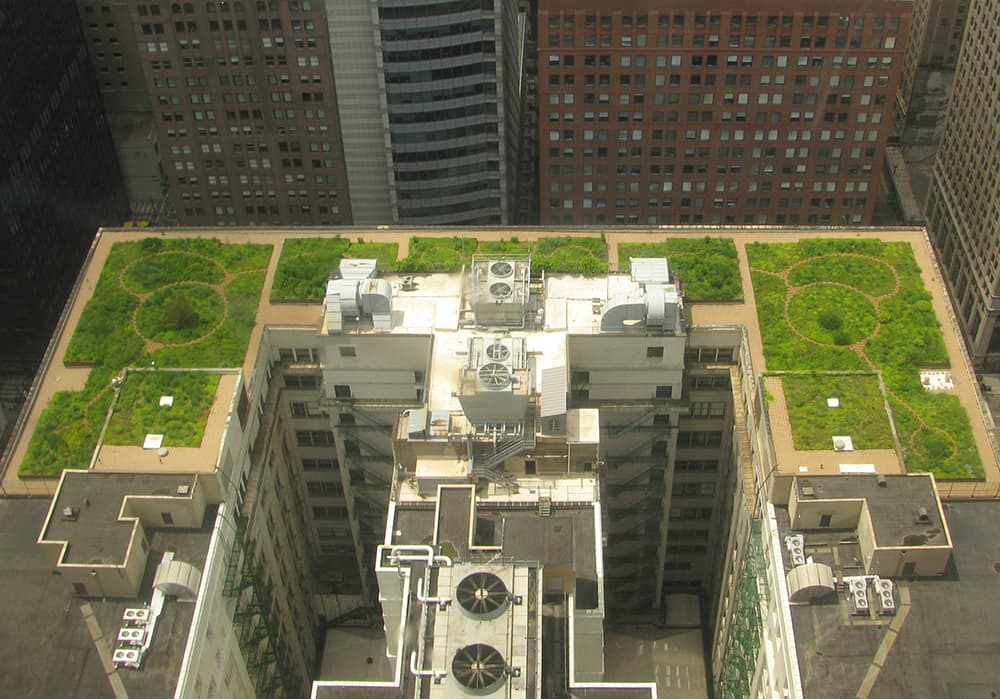 Projects of this kind include Chicago’s green roofs project launched in 2001, as well as linear parks built along old city infrastructure.

The first such park was the 1993 Promenade Plantee in Paris. This inspired the hugely popular High Line that occupies a disused elevated freight railway in Manhattan, which first opened in 2009 and Thomas Heatherwick’s unrealised Garden Bridge in London, proposed in 2013. 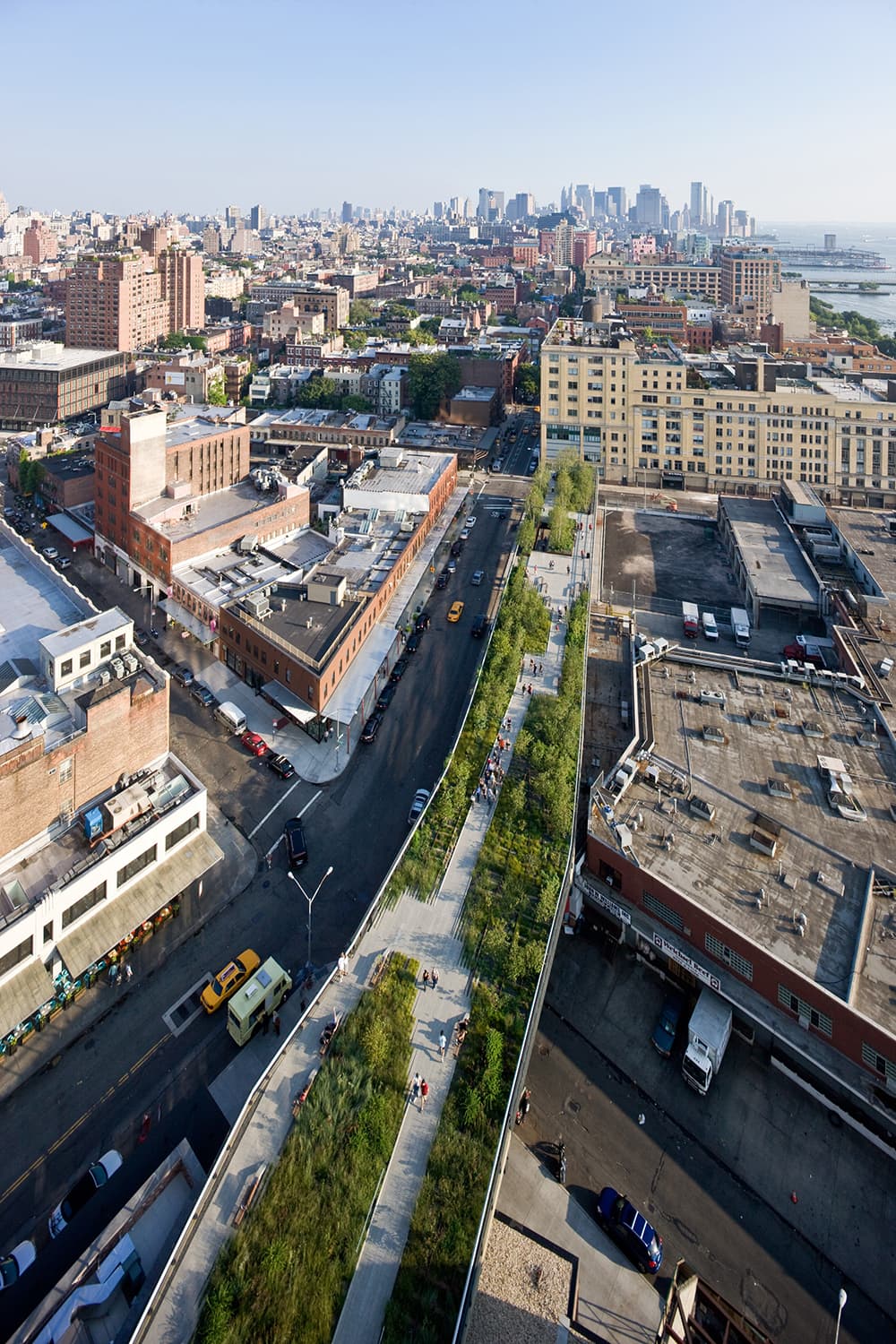 One of the most impressive examples of this is ACROS, a cultural centre in Fukuoka, Japan.

First opened to public back in 1995, this 14-storey building designed by Emilio Ambasz steps down to meet the city’s Tenjin Central Park.

The building contains deep planters alongs the edges of its terraces that allow trees to take root and grow. 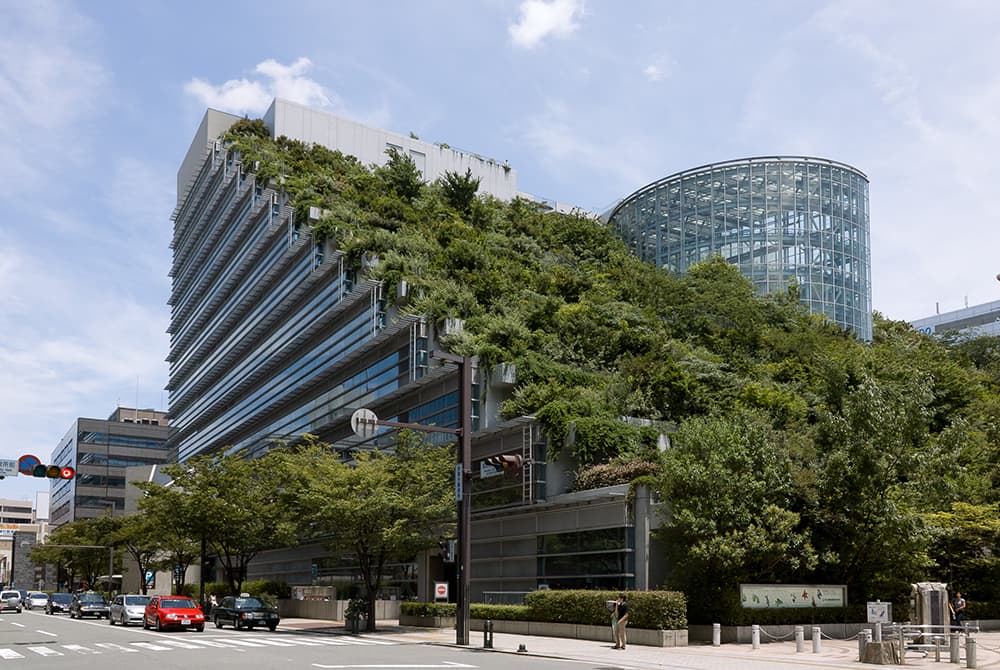 Above: At ACROS in Fukuoka, the building's terraces are used as an extension of the adjacent park (image courtesy of Kenta Mabuchi).

Its 5,400 square metres (58,000 square feet) of greenery contained some 37,000 plants representing 76 different species when it completed.

Today, it contains more than 120 varieties of plant and over 50,000 individual specimens. 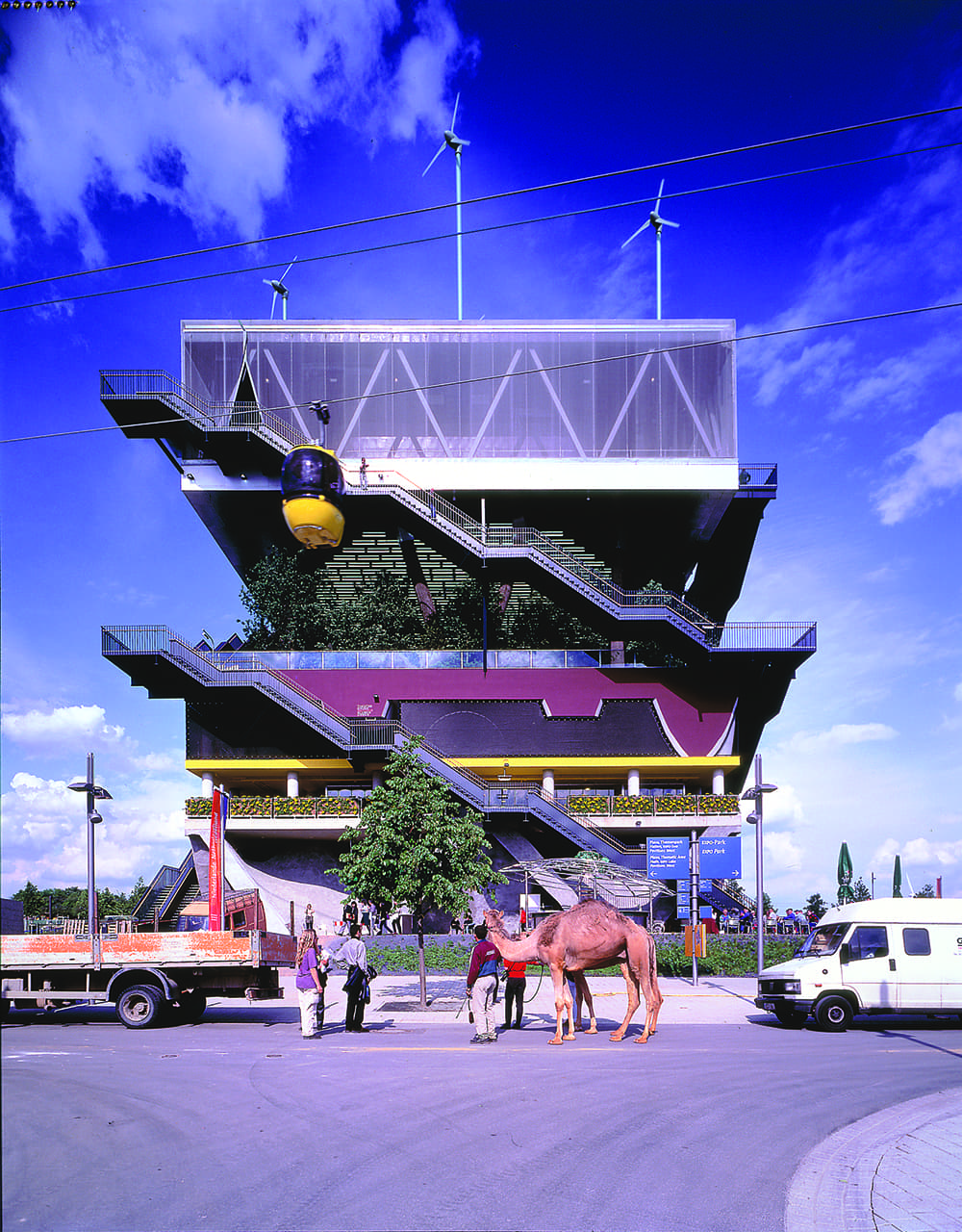 Above: The Netherlands Pavilion at the 2000 Expo in Germany contained a forest on one of its floors (image courtesy of MVRDV).

Architectural office MVRDV took a similar approach when designing the Netherlands’ pavilion for the 2000 Expo in Hanover, Germany.

Here, the entire fifth floor of the structure was given over to a ‘forest’ in which deep planters accommodated mature trees.

Although the structure has since fallen into disrepair, with the mature trees dying off, a new generation of shrubs and trees has since colonised the structure, proving the soundness of the principle. 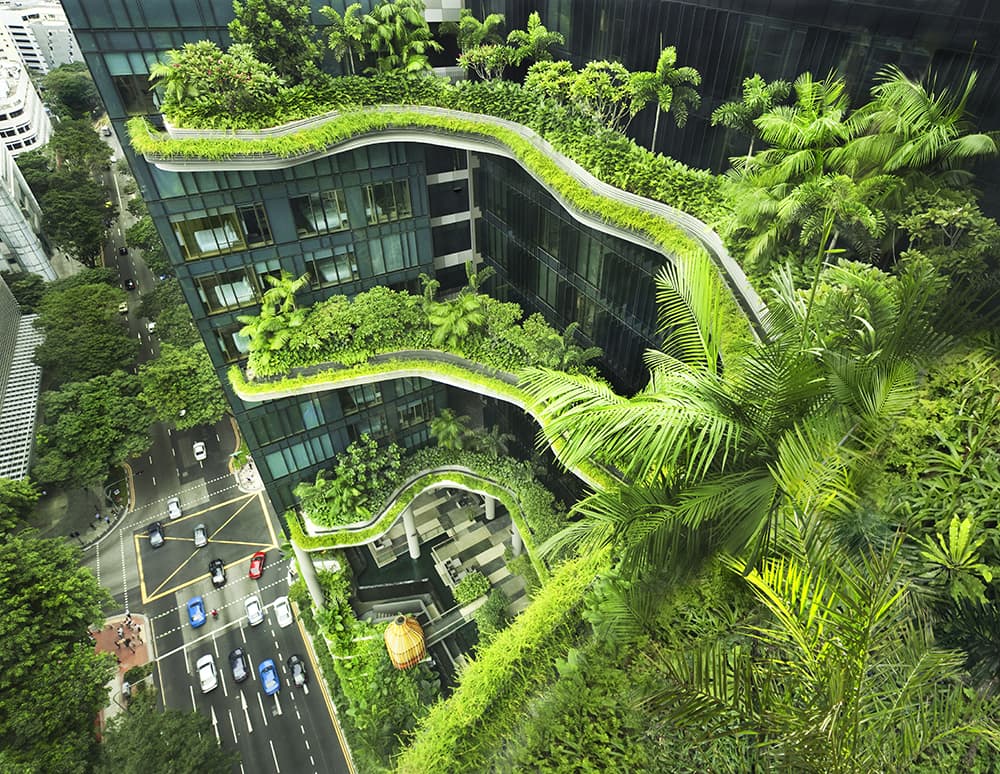 Just a year later, the twin towers of “Bosco Verticale” or the “Vertical Forest”, were completed in Milan. 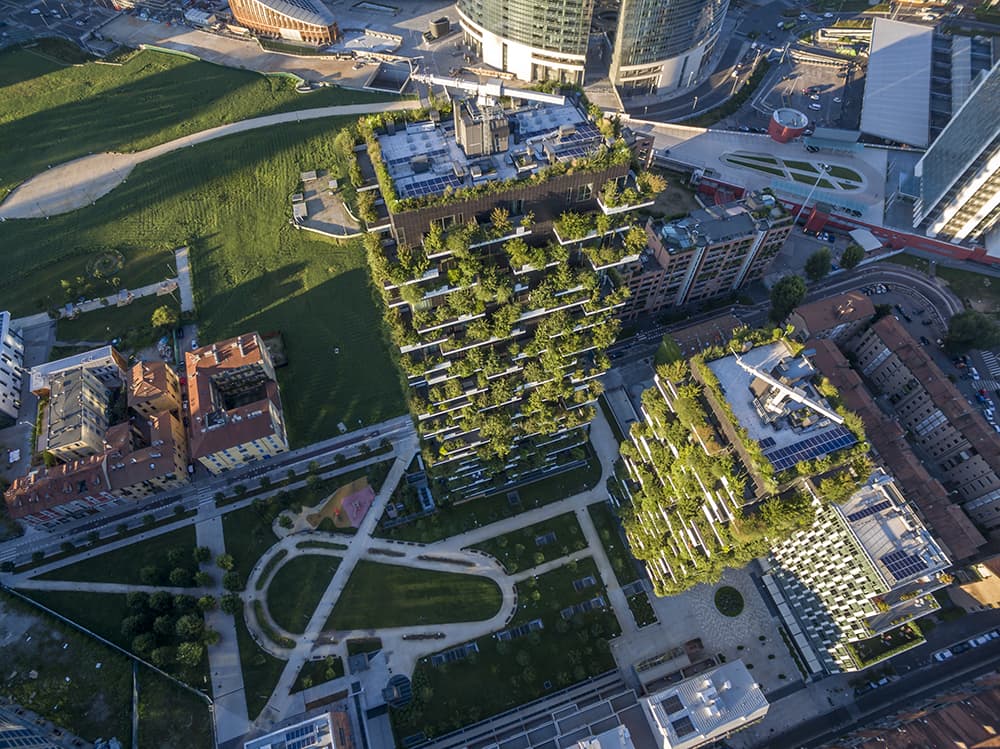 Above: Bosco Verticale is one of the best examples of a tree-covered building in Europe (image courtesy of Stefano Boeri Architetti).

Standing between 3 and 6 metres tall when they were first planted, the trees will be allowed to reach maximum height of 9 metres before being pruned.

In order to ensure their stability in the wind, the trees are tethered to the buildings using steel wires.

Structurally, buildings that incorporate trees will of course require special consideration and additional strengthening and reinforcement.

In the case of Bosco Verticale the additional cost of this reinforcement was clearly offset by the aforementioned benefits and did not prevent the project proceeding. 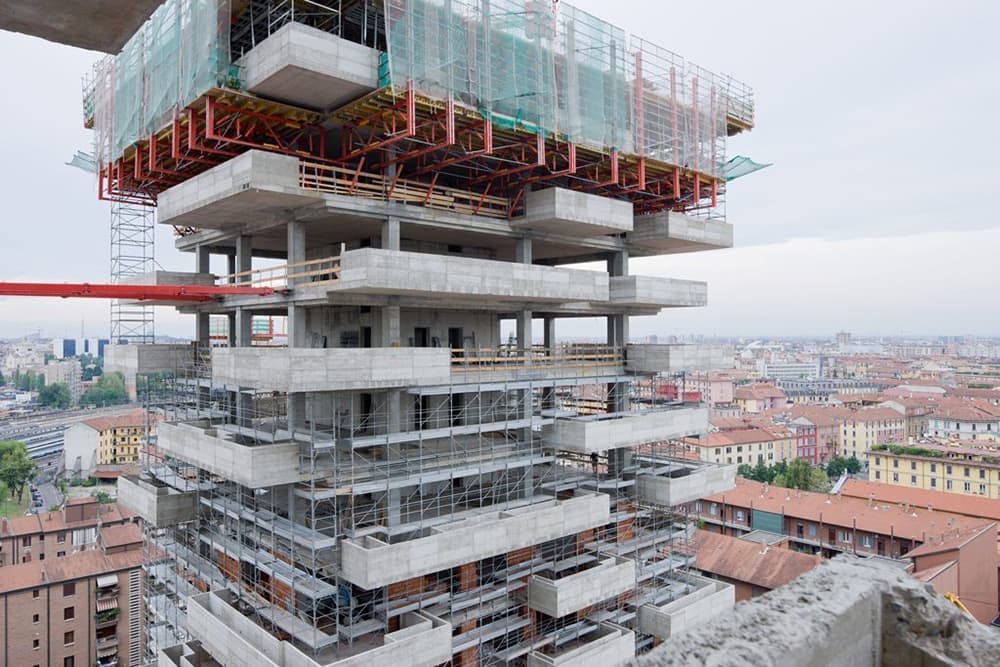 Above: Reinforcements were necessary to construct the deep planters that accommodate Milan's "Vertical Forest" (image courtesy of Stefano Boeri Architetti).

There are other issues to consider when mixing trees with buildings too - such as the embodied carbon of the steel used in reinforcement or building superstructures and the increased demands placed on maintenance.

In this example, the project team were able to use Milan’s excess underground water to cultivate the trees, minimising the towers’ ecological footprint.

Another challenge posed by this new building type, with large amounts of potentially flammable organic matter attached to facades, is fire hazard. 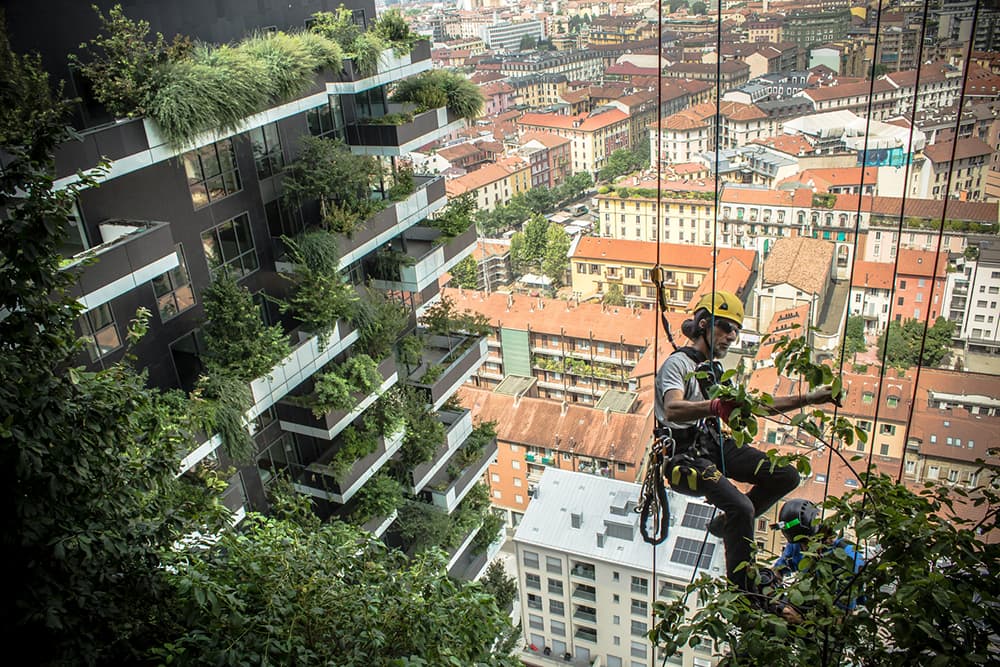 Above: Regular pruning must be carried on green buildings to mitigate fire hazards (image courtesy of Laura Cionci).

Regular pruning and irrigation also help to mitigate the risk of fire, as does ensuring that the soil contains a relatively low percentage of organic matter.

Learning from his work in Milan, Stefano Boeri is currently working on a number of similar projects in places such as Switzerland, China and the Netherlands. 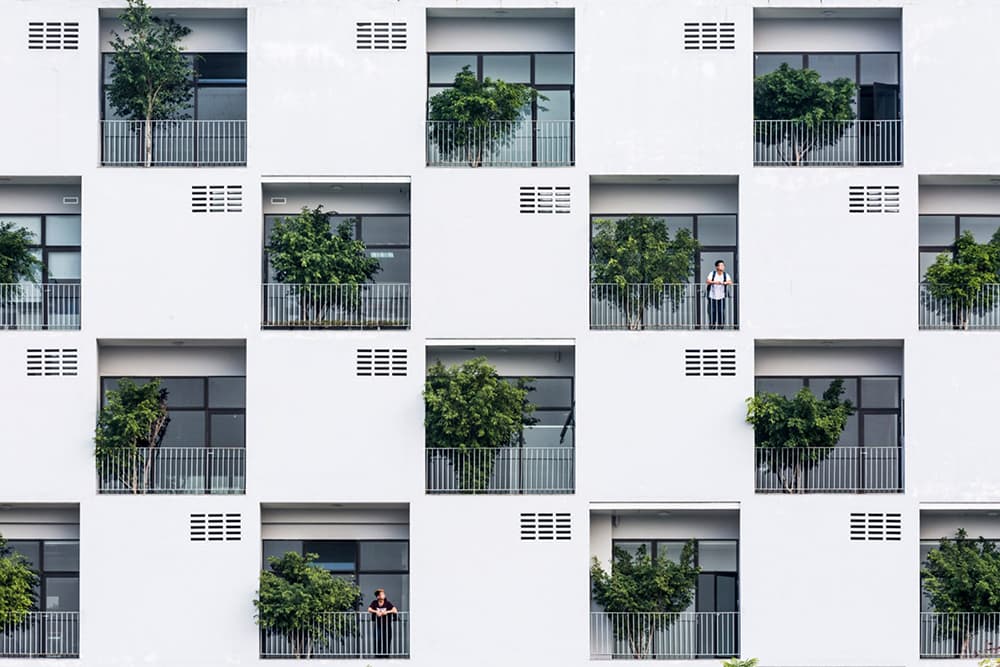 Above: Vietnamese practice Vo Trong Nghia is one of the proponents of intergrating trees in buildings in the South-East Asian context (image courtesy of VTN).

Currently under construction in Taipei, Belgian architect Vincent Callebaut’s Agora Tower, based on the form of a DNA double helix, will feature extensively planted balconies. 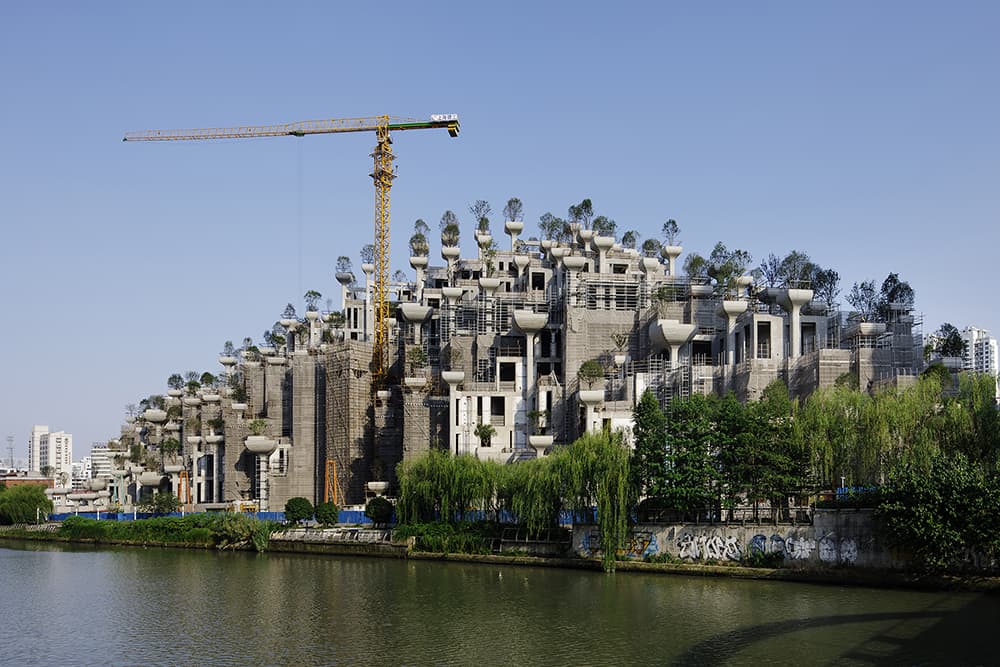 Above: 1,000 Trees is a new mixed use complex designed by British designed Thomas Heatherwick currently under construction in Shanghai (image courtesy of Heatherwick Studio).

Meanwhile in Shanghai, British designer Thomas Heatherwick’s 1,000 Trees, a mixed-use building that features trees and shrubs planted on top of its structural columns is nearing completion.

In the UK, Heatherwick’s Maggie’s Centre in Leeds uses its roofs to create a stepped garden, complete with trees and lush vegetation. 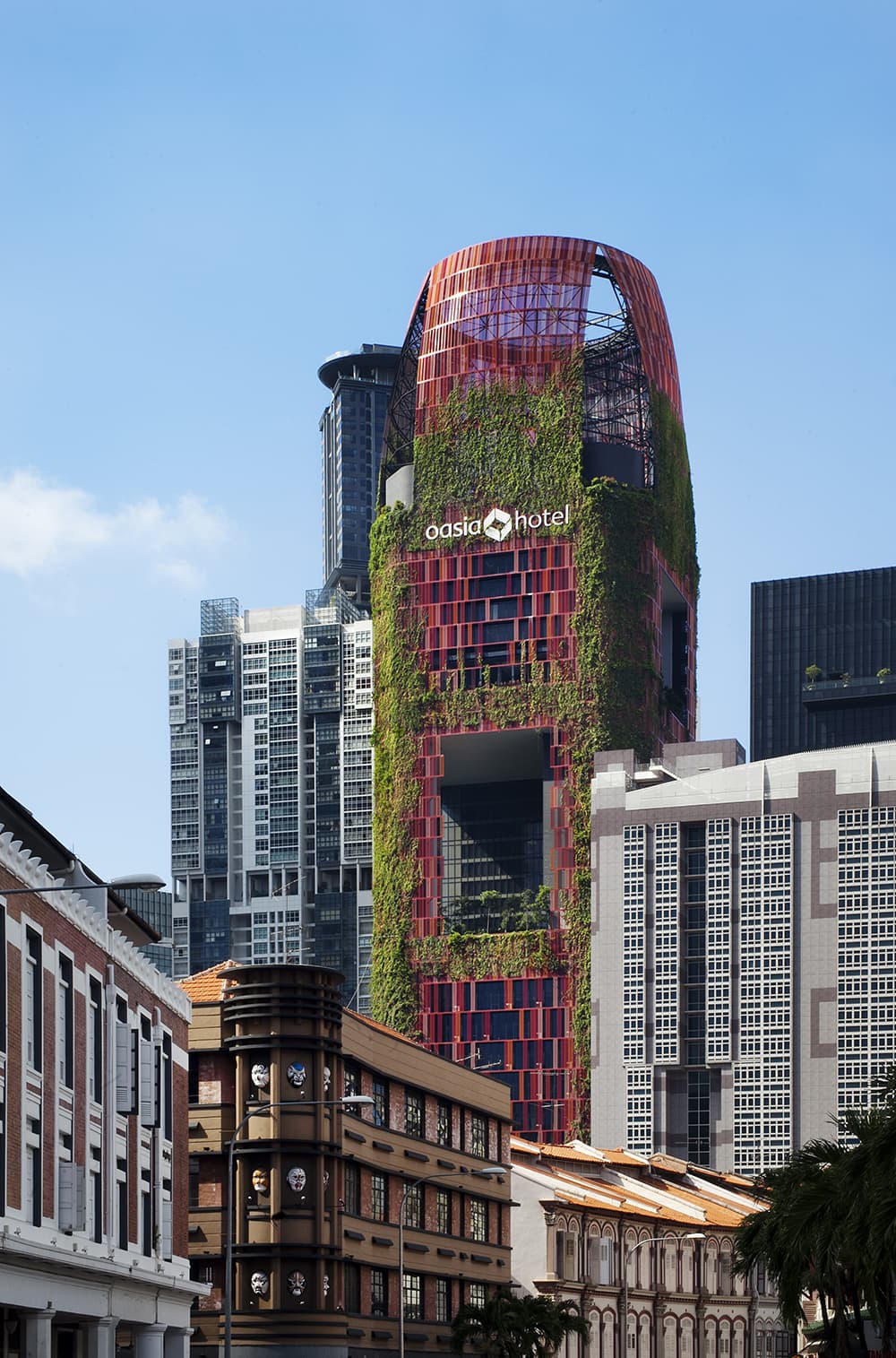 In Singapore, WOHA continue to design green architecture, including the Oasia Hotel Downtown, a 27-storey tower that features an external, trellis-like facade and three large sky terraces with swimming pools and palms.

This innovative structure was named "Best Tall Building Worldwide" in 2018 by the Council on Tall Buildings and Urban Habitat (CTBUH).

The designers and engineers working on the latest generation of treescrapers have also decided to tackle the issue of embodied carbon and the considerable amounts of energy consumed when manufacturing steel and concrete. 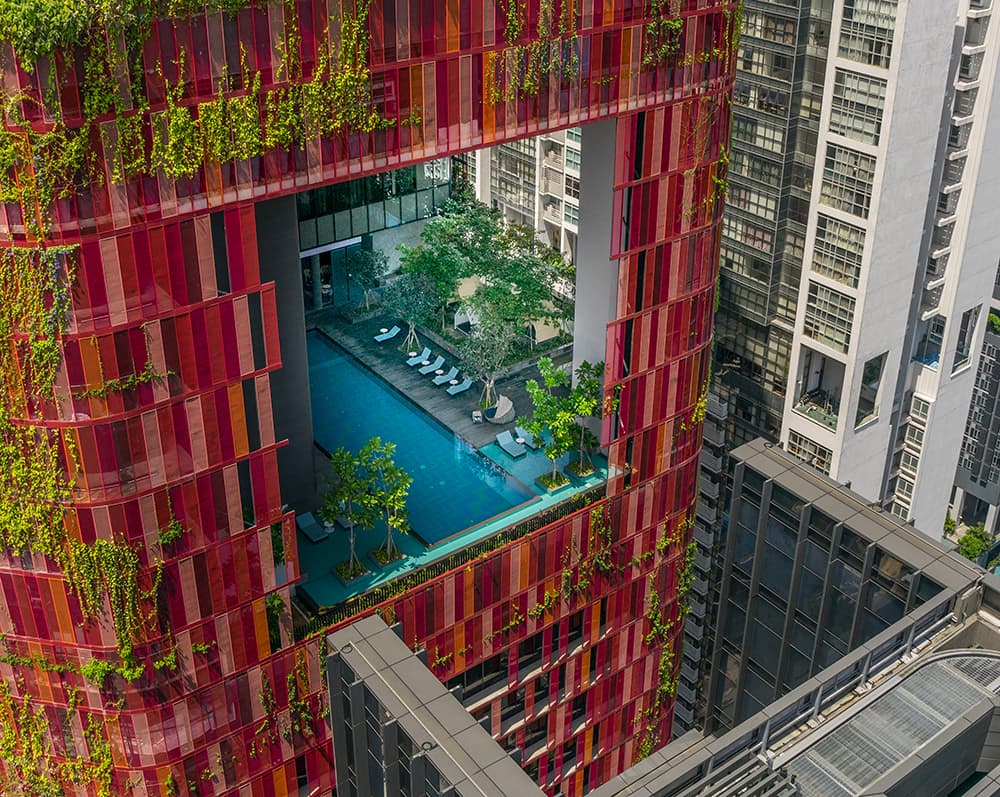 Above: The building won the 2018 CTBUH Award for the best tall building due to its integration of vegetation and gardens ( image courtesy of Patrick Bingham-Hall / WOHA).

Increasingly, carbon-negative materials such as Cross Laminated Timber (CLT) or glue laminated timber, commonly known as glulam are being used. 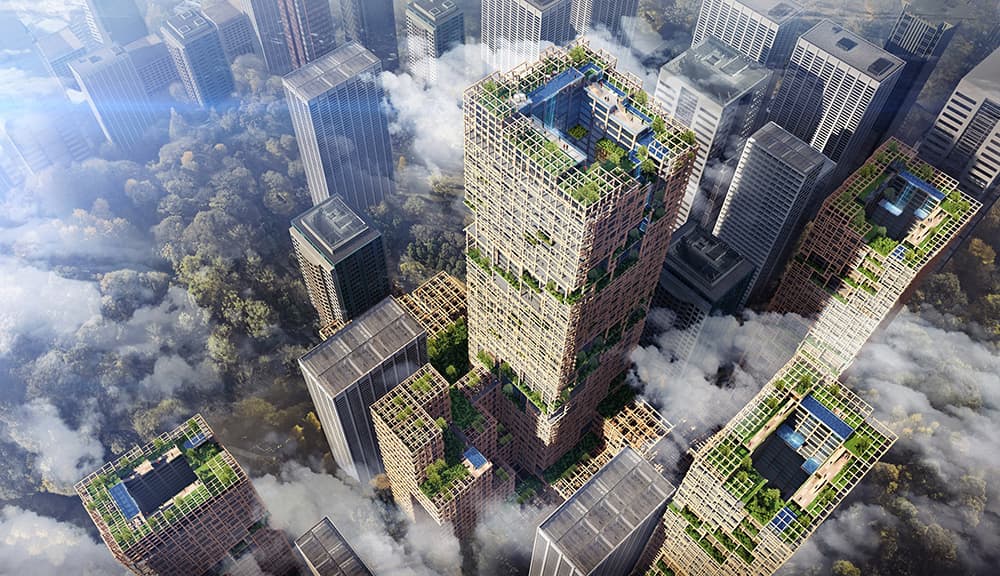 Above: Architects and engineers are designing trees scrapers that use glulam and CLT in order to reduce their building's carbon footprint (image courtesy of Nikken Sekkei).

High rise structures such as the proposed 18-storey Tree Tower Toronto by Penda - or the 350 metre tall theoretical proposal for Sumitomo Forestry’s headquarters in Tokyo by Nikken Sekkei - demonstrate the continually growing trend of incorporating trees into buildings and the work of today’s architects and engineers to push the concept to its very limits.