FOR centuries, bridges have helped us cross geological features - such as rivers, canyons or rugged terrain - and in modern times we have seen them integrated into cities and our infrastructure networks with an almost endless array of uses.

From humble beginnings, these structures have grown into some of the greatest engineering achievements in human history.

To develop this list, we have looked at the longest bridges in each of the five main bridge structure categories and used “continuous span” to define their length. As a result, elevated highways or causeways with regular supports along their lengths are not included.

First up is the Ikitsuki Bridge, a truss structure built in the Nagasaki Prefecture of Japan that links the island of Ikitsuki to its larger neighbour Hirado.

Constructed in 1991, the 400 metre (1,312 foot) span steel bridge supports itself through a system of interconnected steel beams that form the triangular trusses of its superstructure.

These elements carry either compressive or tensile stresses with the counter-acting actions on each individual member allowing the bridge to distribute weight evenly when carrying dynamic loads such as vehicle traffic. 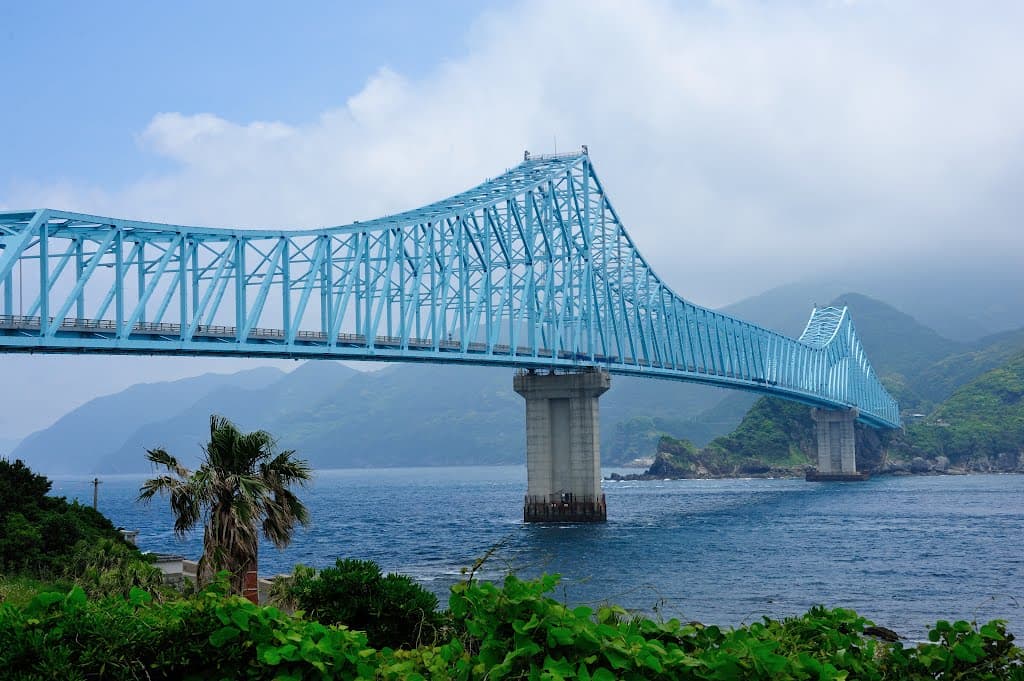 Above: Truss bridges can carry relatively heavy loads using minimal materials, this has allowed them to incorporated into difference types of bridges (image courtesy of Shortgame).

Being one of earliest forms of modern bridges, truss designs are often incorporated into other bridges due to the considerable loads they can carry for the material they use.

The Pont de Quebec - or Quebec Bridge - in Canada is a steel structure that takes the title of longest cantilever bridge in the world with its impressible 549 metre (1,801 foot) main span.

Above: The Pont de Quebec Bridge is still the world's longest cantilever bridge after more than 100 years (image courtesy of Muriel Le Clerc).

Completed in 1917, the bridge was plagued with misfortune throughout its construction, collapsing not once, but twice before it was opened to the public.

The first collapse was the result of improper calculations relating to the bridges weight and overall load bearing capacity. In 1907, four years after construction began, the southern and central spans collapsed into the St Lawrence River, killing 75 workers.

After going through a re-design, a second iteration of the bridge was commissioned and began construction in 1913 with an even longer central span than its predecessor.

This time the bridge was overseen by three engineers, including an expert who had worked on Scotland’s Forth Bridge. 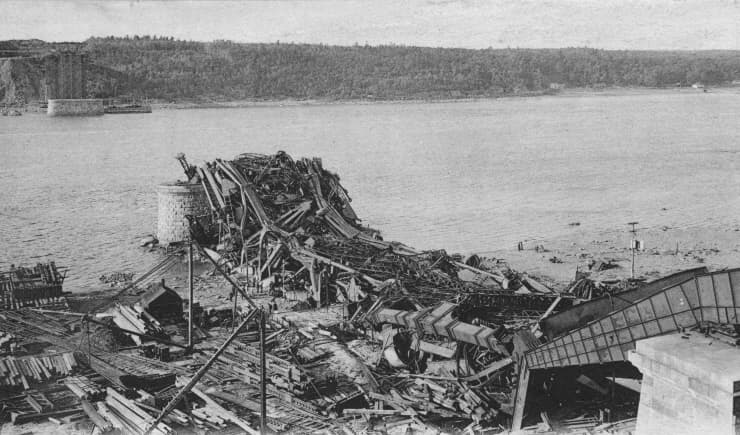 Above: The aftermath of the first bridge collapse. Below: The central span falling into the St Lawrence River ( images courtesy of National Archives of Canada).

However, these precautions didn’t stop the bridge from experiencing its second disaster.

In 1916, the hydraulic mechanism hoisting the central span into position failed and bridge fell into the river below, taking a further 13 workers with it. The collapsed section still lies at the bottom of the St Lawrence to this day.

When the bridge was finally completed in 1917 - after almost two decades of construction - it took the prestigious title of “world’s longest bridge”.

Despite losing that position in the decades that followed, the Quebec Bridge remains to this day, the longest cantilever bridge in the world.

Arch bridges are one of the oldest types of bridge and come in a wide variety of forms. From the early stone arches used by the Greeks and Roman, to the steel giants of today.

The longest of these, with a central span of 552 metres (1,811 feet) is the Chaotianmen Bridge in China. 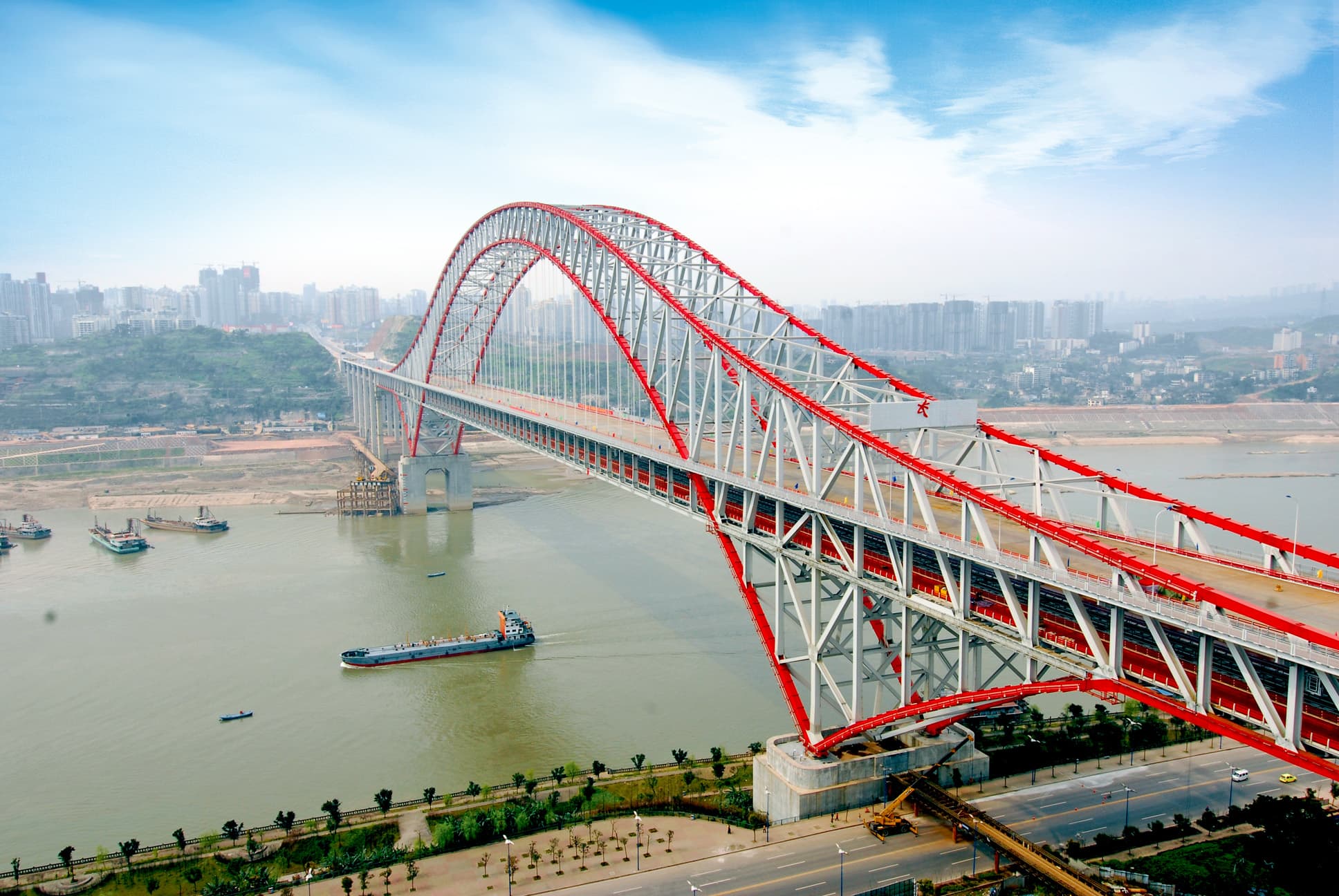 Above: The Chaotianmen Bridge carried both road and rail traffic across the Yangtze River. (image courtesy of China Communications Construction Company).

Despite varying greatly in appearance, arch bridges are all based on the same engineering principle of distributing loads from the centre of the structure outward into abutments at either end.

This can be done through foundations or pylons, like with the Sydney Harbour Bridge, or the earth itself as is the case with the Mike O’Callaghan-Pat Tillman Memorial Bridge, in the United States.

With a main span of 1,104 metres (3,622 feet) the Russky Bridge in Vladivostok was built to connect Russky Island to the Russian mainland ahead of the 2012 APEC summit.

Above: At 321 metres the Russky Bridges two support towers are among the tallest in the world (image courtesy of Баяков Алексей Александрович).

With its total length exceeding 3,100 metres (10,200 feet) The Russky Bridge needed some of the tallest pylons of any bridge in the world in order to carry it's remarkably long road decks.

Controversially, the bridge was built at an estimated cost of USD $1.1BN with a capacity to carry 50,000 cars a day. However, with the population of Russky Island at just over 5,000 people, the bridge is severely underutilised and considered by many Russians to be a white elephant.

All of the world’s longest bridges use the suspension principle, and the longest of these is a true titan of engineering.

With a central span of almost two kilometres, the 1,991 metre (6,532 feet) Akashi Kaikyo Bridge in Kobe, Japan is the longest bridge in the world.

Built over the course of a decade - between 1988 and 1998 - the Akashi Kaikyo Bridge was developed to address a range of issues.

The Akashi Strait is a major shipping lane that is notorious for severe storms, so any fixed crossing had to avoid large numbers of supports across the channel. On top of this, the bridge lies in one of the world’s most seismically active zones; the “Pacific Ring of Fire”.

To overcome these challenges, engineers developed a suspension bridge structure that was able to span the vast distance whilst being able bend and flex without suffering serious structural damage.

The roadway is hung from vertical suspension cables attached to the main cables strung between the bridge’s two supporting towers. These cables are anchored into the bedrock at each end of the structure. 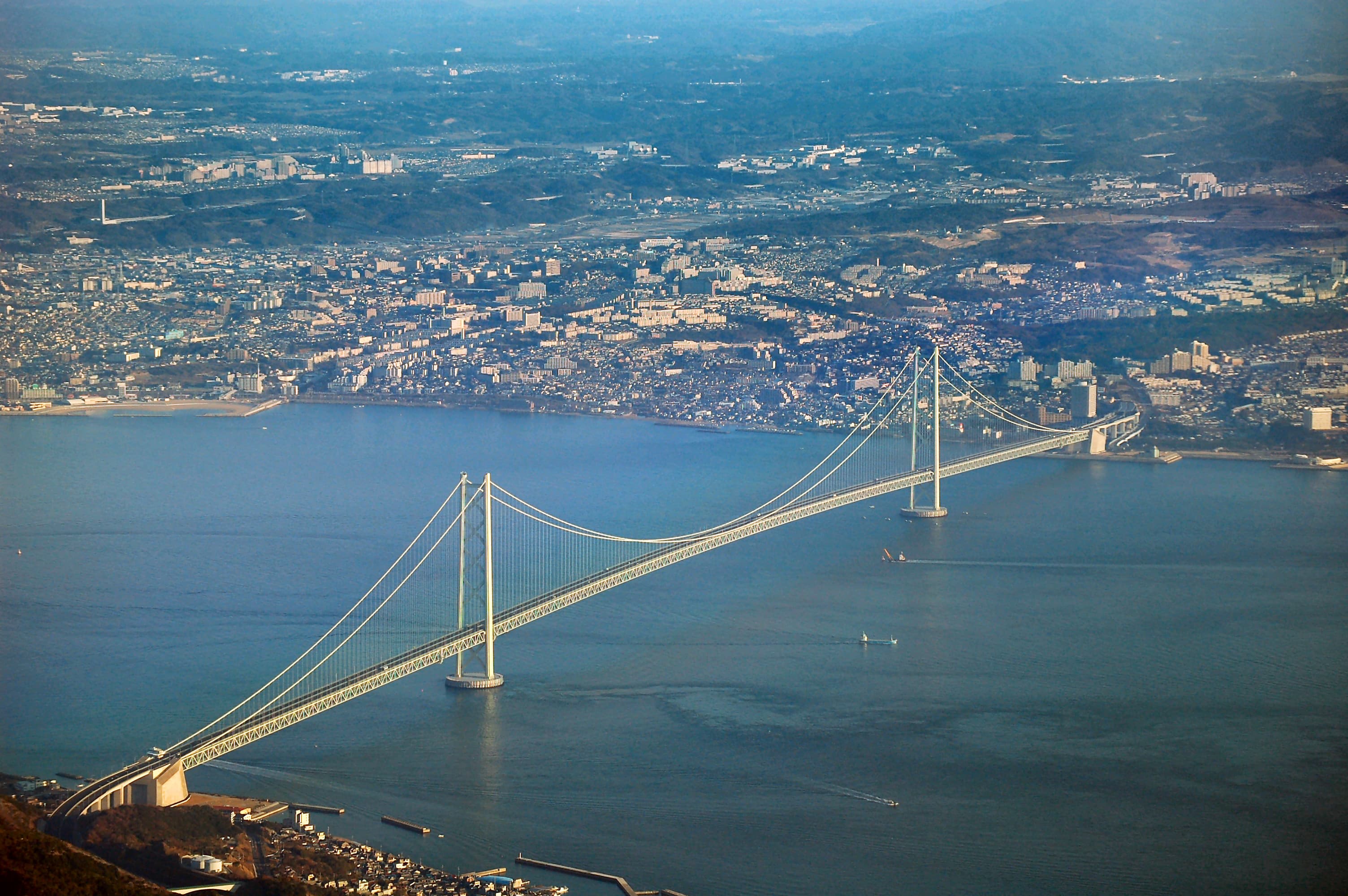 Above: The world's longest bridge, the Akashi Kaikyo Bridge, was made longer during construction by an earthquake that moved its support towers further apart (image courtesy of Tysto).

Originally designed with a main span of 1,990 metres, the city of Kobe experienced a 7.2 magnitude earthquake in January 1995 while the bridge was still under construction. The resulting ground shift pushed the bridges two supporting towers apart resulting in an additional meter (3 feet) of roadway being added to the structure to complete the deck.

A dual-hinged stiffening girder system and tuned mass dampers in each of the two support towers of the bridge mean it can withstand 286 km/h (178 mph) winds and earthquakes measuring as high as 8.5 on the Richter Scale.

Built at a cost of USD $3.6BN the Akashi Kaikyo Bridge remains one of the most expensive bridges ever constructed.

So how do some of the world's better known bridges compare?

Above: The Golden Gate Bridge is the former record holder for world's longest bridge and a true icon of engineering.

Sydney Harbour Bridge in Australia was the world’s widest between 1932 and 2012 - with a width of 48.8 metres (169 feet), and the Milau Viaduct in France remains the world’s tallest bridge to this day, with pylons standing 343 metres above the ground. 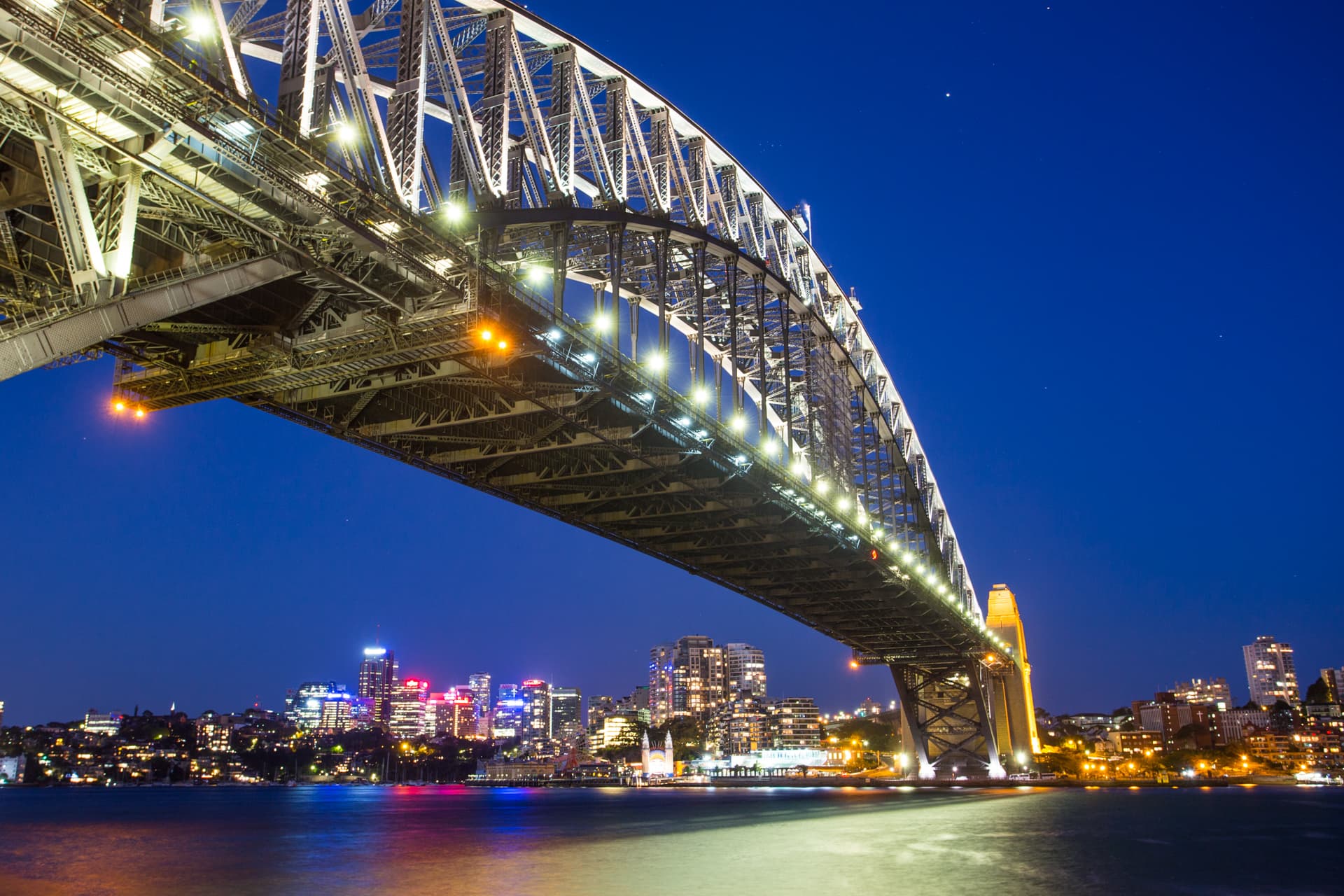 Above: Sydney's Harbour Bridge was the world's widest until 2012 (image courtesy of Anne Dirkse). Below: The world's tallest bridge, the Millau Viaduct. 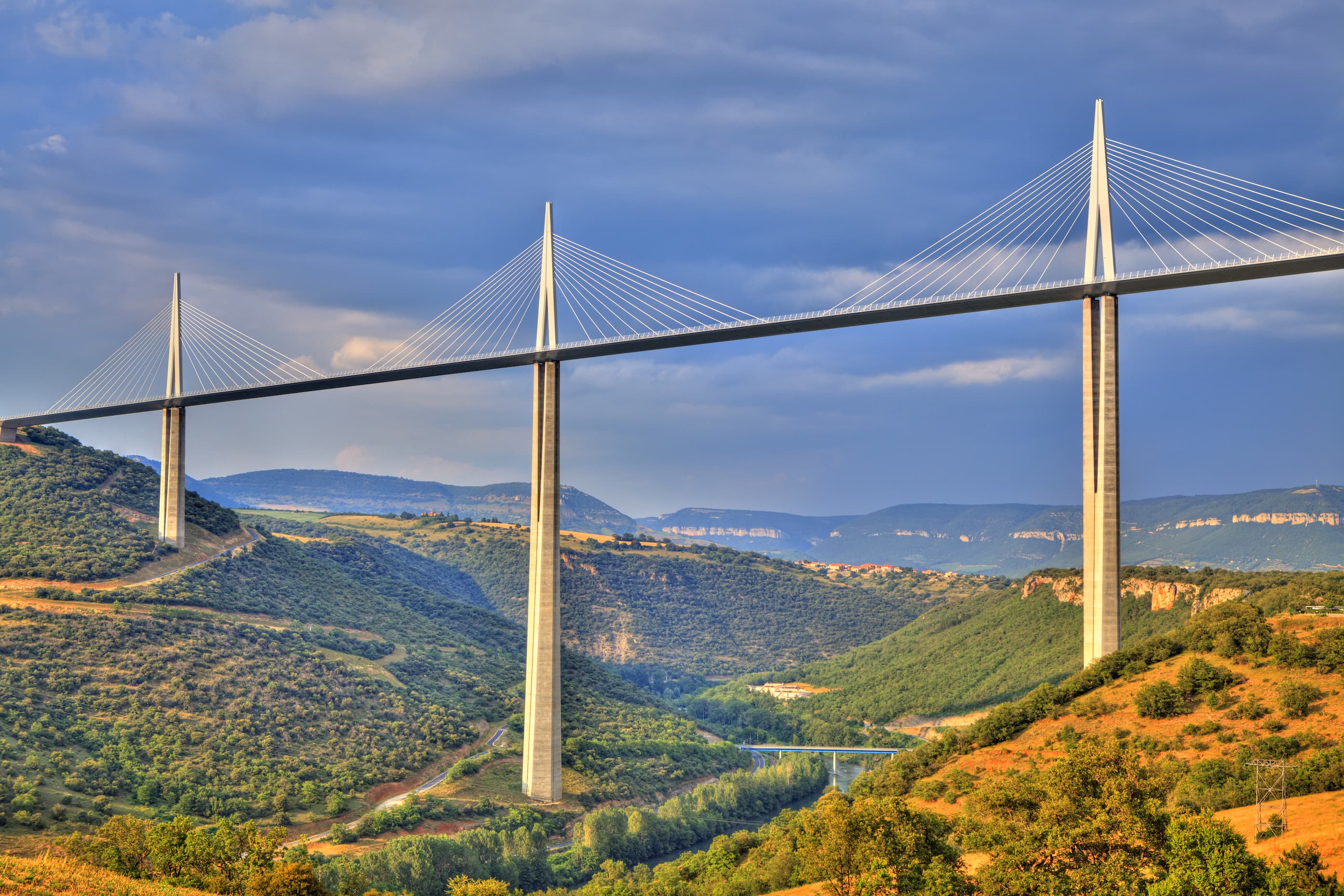 A Stadium Fit for the SuperBowl