WHEN the Queensferry Crossing completed, it joined the Forth Road Bridge and the Forth Rail Bridge as the third striking engineering icon to cross the Firth of Forth in Scotland.

The three bridges – the first completed in the 19th century, the second in the 20th and the latest in the 21st century – represent three centuries of engineering excellence.

Above: Scotland's Forth Bridges.

There has been a crossing route over the Forth since Margaret Queen of Scotland founded a ferry to take pilgrims north to St Andrews in the 12th Century.

The ferry remained the only way to cross the Forth until the Victoria era, when the rapid expansion of the railways became the catalyst for a permanent crossing.

Bridging the 1.55-mile span would connect Edinburgh to Fife and dramatically reduce the rail travel time between London and Aberdeen from 13 to eight and a half hours. 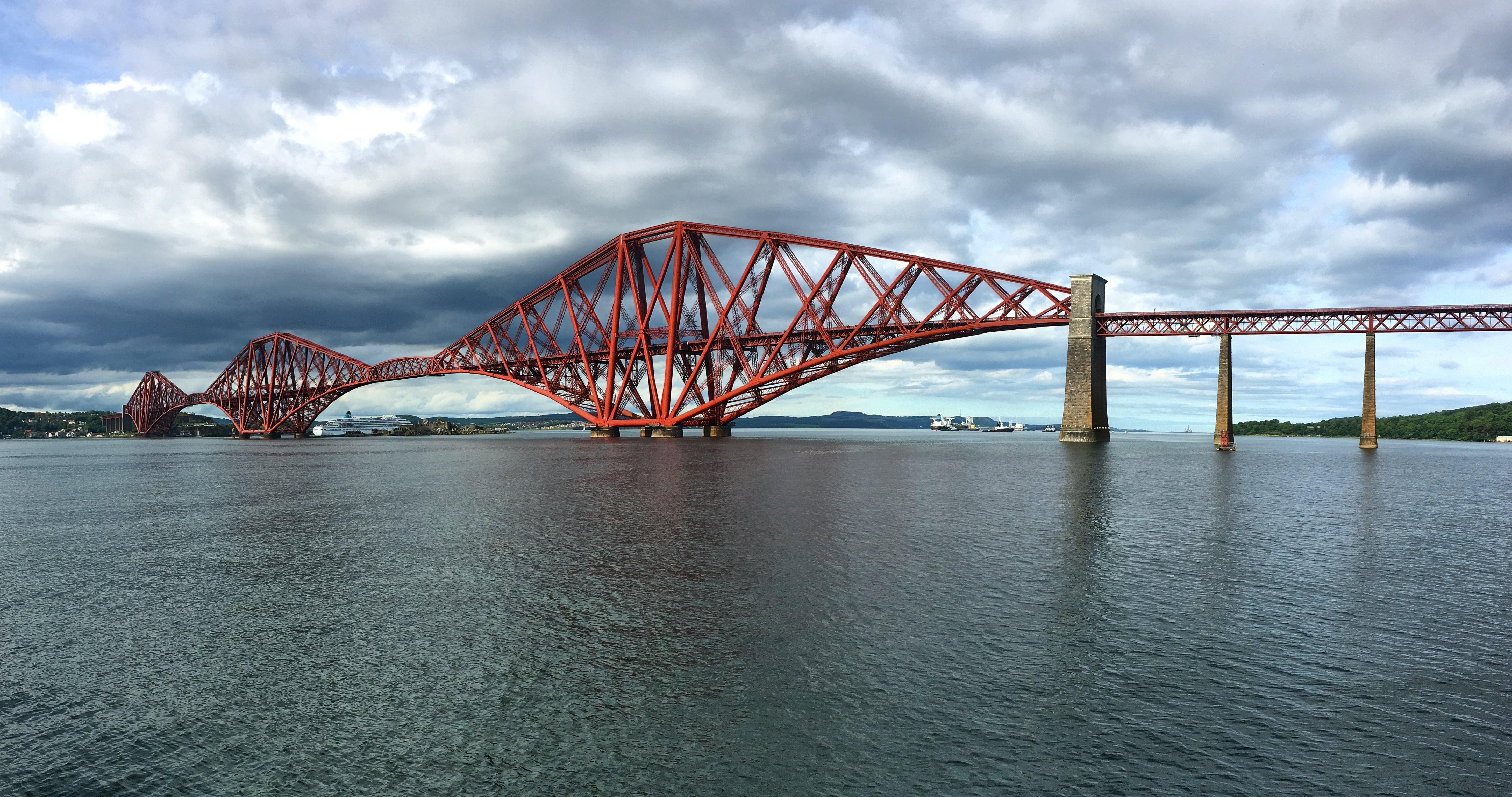 Above: The Forth Bridge is one of the most recognisable landmarks in Scotland (image courtesy of Timo Newton-Syms).

The bridge, completed in 1890, is the world’s most famous cantilever and a symbol of Scotland that in 2016 was voted the country’s greatest man-made wonder.

A milestone in civil engineering, the bridge was the first major structure in Britain to be formed of steel, with the majority of previous bridges – much like the contemporary Eiffel Tower – constructed from cast or wrought iron.

Designed by Benjamin Baker and Sir John Fowler, the bridge also furthered the wide-scale adoption of cantilevers as the most effective means of constructing long-spans.

The pair famously demonstrated this cantilever and central girder principle with the human cantilever at a lecture to the Royal Institution in London in 1887. 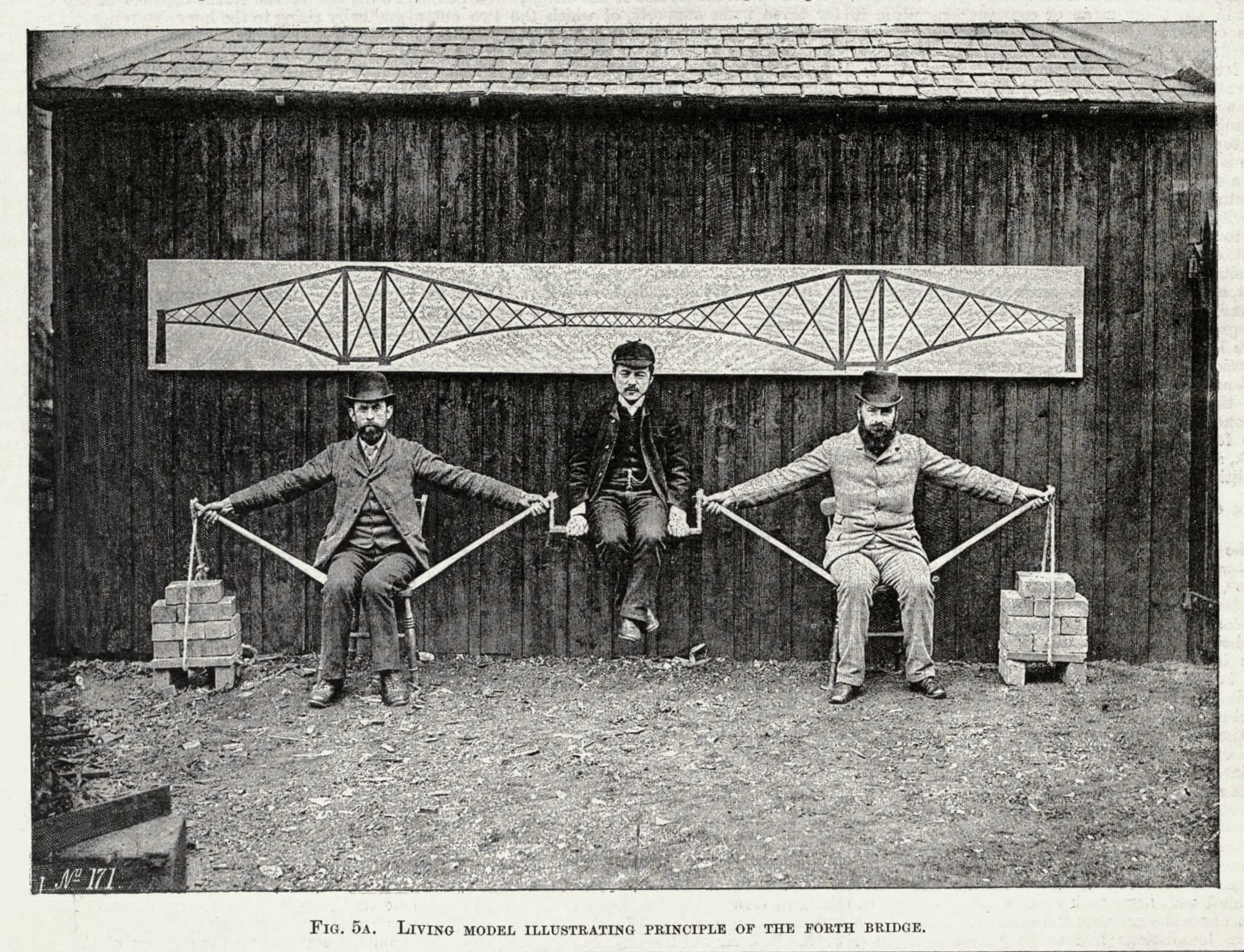 Above: The human cantilever at the Royal Institution in London, 1887.

As the 521 metre span was almost four times as large as any railway bridge previously built in the United Kingdom, construction of the Forth Bridge posed immense challenges.

Each of the three main towers is supported on four separate granite foundations, constructed within iron caissons. From these towers the arms of the bridge were extended outwards.

This demonstrated the buildability of a cantilever system as construction takes place by building out from one support using no temporary support structure – the bridge’s structure supported itself and provided a platform for the workmen.

When it opened in 1890 the Forth Bridge had the world’s longest single cantilever span. It is still in operation and now carries 200 trains every day. In 2015, the bridge was designated a UNESCO World Heritage site.

THE FORTH ROAD BRIDGE

The rail bridge would remain the sole crossing over the Forth for the next 70 years, and it was only the rise of a different form of transport – the car – that prompted the development of a second bridge. 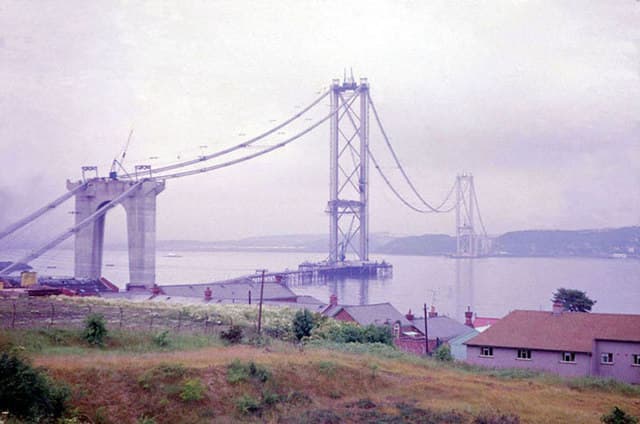 Above: Although the first proposals for a road bridge were made in 1923 it wasn’t until the 1950s that construction on a crossing actually began (image courtesy of Alan Findlay).

Like its older sister, the Forth Road Bridge is itself a cutting-edge piece of engineering. The suspension bridge was the largest in Europe when it completed and including its approach viaducts stretches for over a mile and a half.

In total 30,800 miles of wire were aerially spun back and forth across the estuary to build up the main cable using a method that was new in Europe. To up-skill operatives in this new technique, a dedicated new training school was set up in South Queensferry. 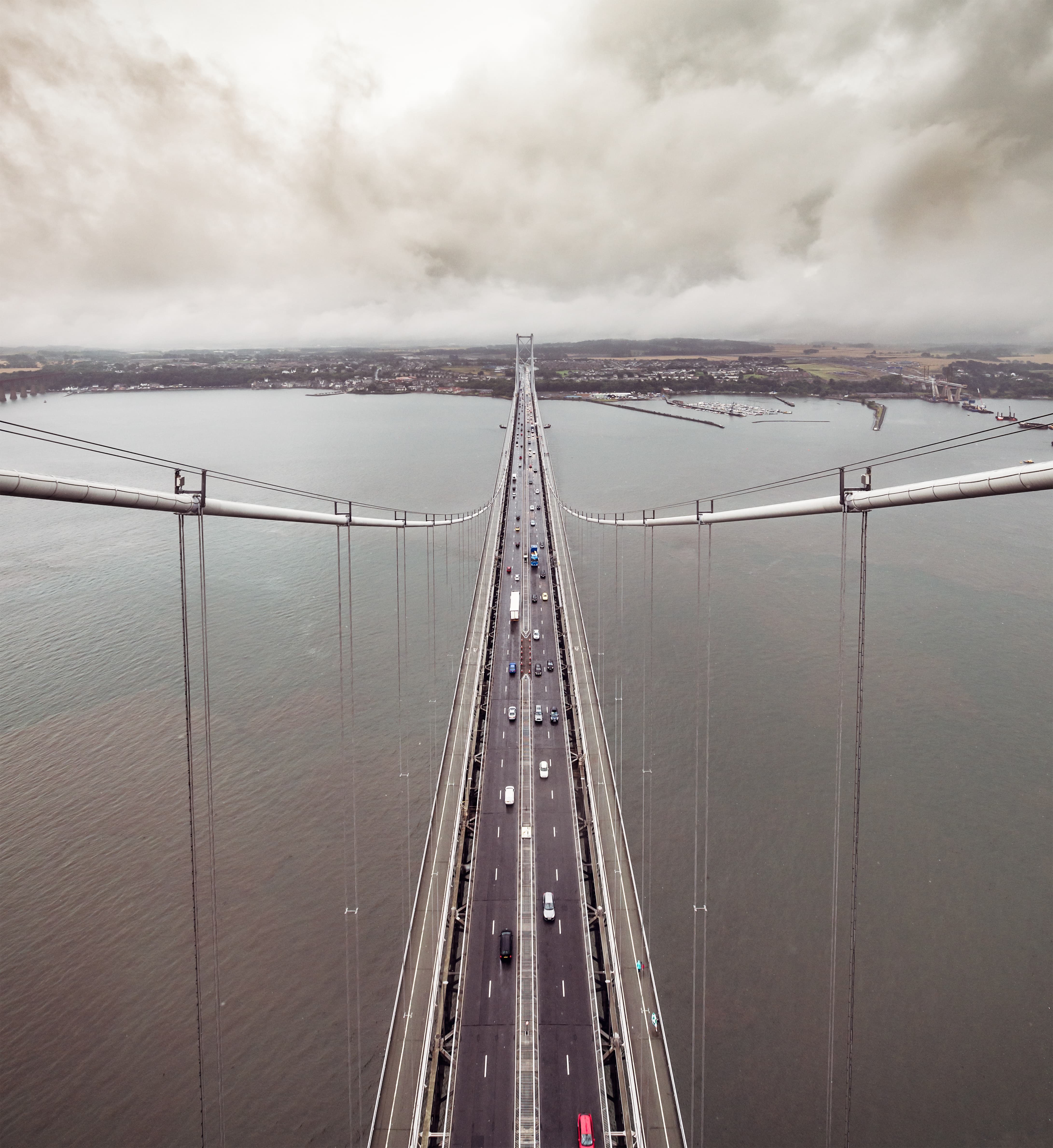 Above: The Forth Road Bridge opened to traffic in 1964 and was designated a Category A listed structure in 2001.

Unlike the rail bridge, the Forth Road Bridge has not stood the test of time. Corrosion and increasing traffic loads led to the towers being strengthened in the 1990s and the 768 hanger ropes being replaced in 2000.

Despite the renovations and significant investment, in 2007 a new bridge was commissioned. 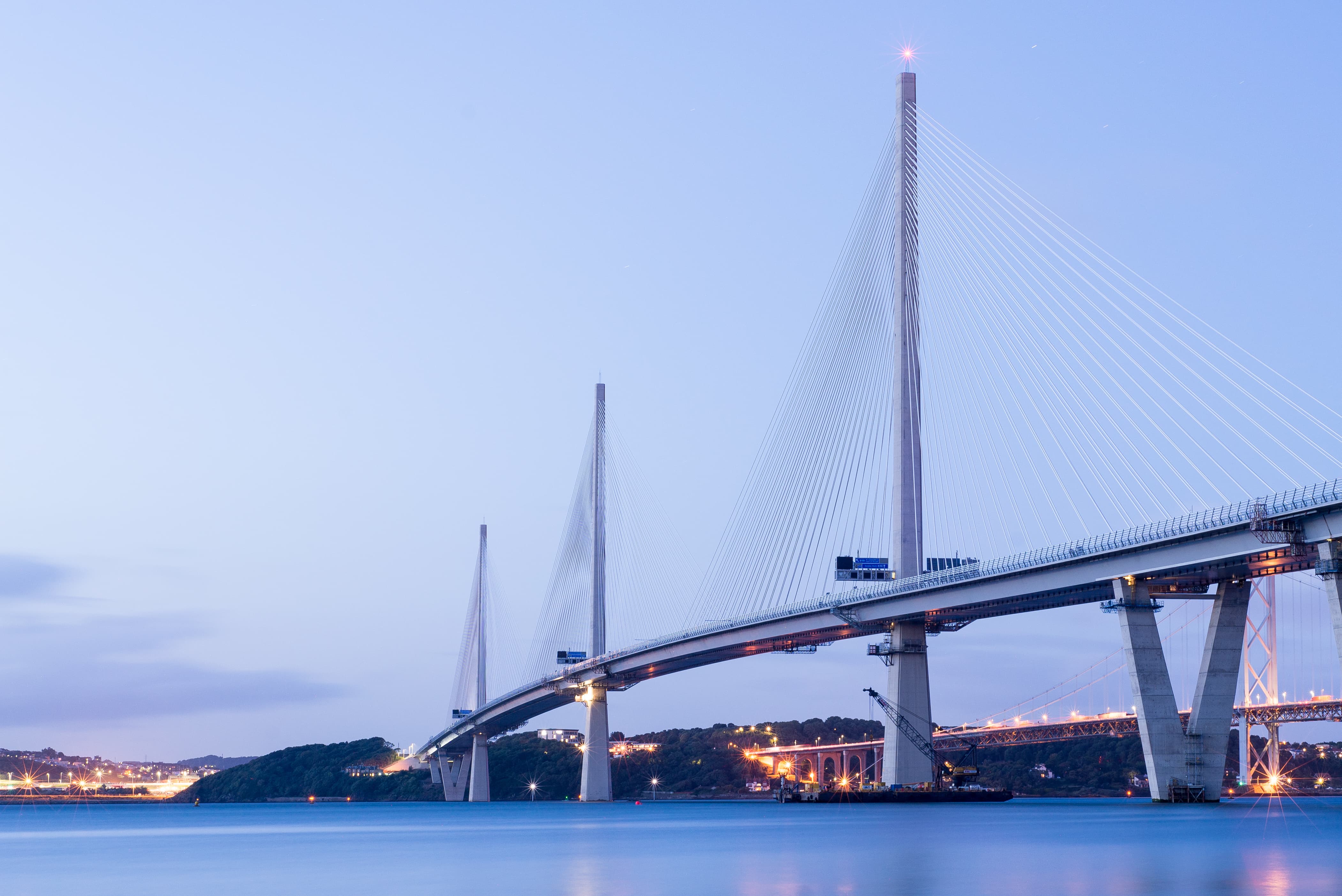 Above: The Queensferry Crossing is the third bridge to cross the Firth of Forth.

Billed as the largest Scottish construction project “in a generation”, the Queensferry Crossing now stands proudly alongside its illustrious neighbours.

The striking piece of engineering is the tallest bridge in the UK and the longest three-tower, cable-stayed bridge in the world. It largely replaces the existing road bridge, is expected to carry 24 million vehicles each year and remain open in all weathers.

Learning from the previous bridge, the Queensferry Crossing has been designed with longevity in mind.

Key to this is the fact that each of the individual cables can be replaced as part of the bridge’s regular maintenance and can take place without having to close the bridge to traffic.

Before the bridge’s decks were connected to each other, the 322 metre balanced cantilevers were certified by the Guinness Book of Records as the longest cantilevers ever built. 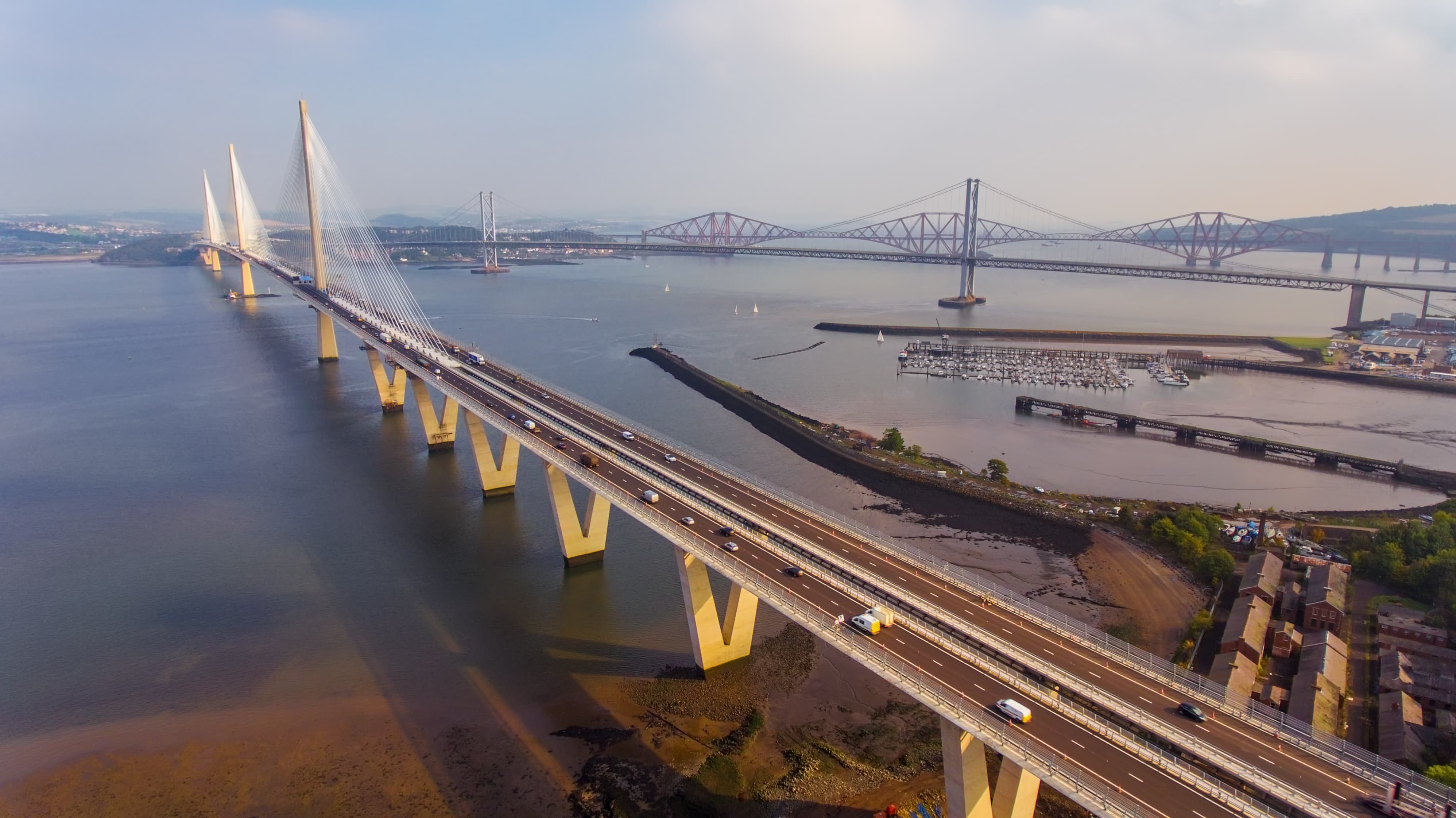 Above: The new Queensferry Crossing.

Remarkably this vast construction project, that was built in extremely challenging site conditions over 200 metres above the surface of the Forth, was completed £250 million under budget.

It now stands alongside the Forth Road Bridge and the original Forth Bridge as a modern engineering great. Together the three structures visibly demonstrate three centuries of engineering innovation.