THESE historic towers in Chicago are at risk, but not because there’s a shiny new development coming along that wants their site. The US Federal Government just wants to demolish them.

In a move that’s apparently all about improving security, the Consumers and Century buildings on Chicago’s iconic Loop are currently slated for destruction. But as an important part of the city’s architectural history, many are fighting hard to keep them standing.

"What's unusual is that there's now an earmark to demolish them, a $52M earmark approved by Congress as part of a big omnibus bill," Ward Miller, Executive Director of Preservation Chicago said. "Earmarks we have not seen in the United States in a long time, but specifically to demolish these buildings."

Critics argue the move would be a major architectural and economic blow for Chicago. So why is the federal government getting involved in a local demolition project? Why are they picking on these buildings? And do people stand any chance of stopping it?

This is the $52M federal quest to demolish two of Chicago’s towers.

Above: The Consumers and Century Towers. Image courtesy of Landmark Illinois.

To really get your head around why the US government wants to demolish these buildings and why that’s so contentious, you need to understand where they came from.

Back in 1871, the Great Chicago Fire devastated the city. Burning for more than 24 hours, flames destroyed over 17,000 buildings and killed 300 people. Left with over $200M in damages, Chicago looked to rebuild.

In the wake of the destruction a group of architects came together and began experimenting with unique designs that could protect buildings from future fires and help jumpstart the economy.

Enter the Home Insurance Building. Designed by William Le Baron Jenney and built in 1885 – it’s known today as the world’s first skyscraper. Its 10-storey steel frame was incredibly innovative at the time. Before that, buildings used iron frames with thick masonry walls as support.

"The development and integration of steel as a product to design buildings that were much taller and thinner, that allowed for more light and air to come into these structures prior to what we would known today as, you know, air conditioning and electric lighting," Miller said. "Basically the idea is almost a steel birdcage, if you will, which in which masonry is hung from that steel birdcage. And what that allowed for is larger window areas, larger spans, thinner buildings as far as their depth of their walls."

The style soon became known as the Chicago School of Architecture.

According to Miller, "Those innovations still continued today in our skyscrapers and our superstructures buildings over 80 floors, sometimes way over a hundred floors that you see around the world, that technology developed in Chicago and continued to develop even in the superstructures, like the Sears Tower. Now the Willis Tower and the John Hancock Building of the late 1960s and early 1970s."

By the mid 1910s, the style was recognisable around the city and two new additions joined the club: the Century and Consumers Buildings. Standing at 16 and 22 stories tall respectively, the pair were then-part of the city’s State Street Retail District. Tenants included small businesses, offices, and showrooms.

During construction, workers spent two months driving 38 caissons underground to support the steel structure of the Consumers Building. This steel was then covered in white architectural terra cotta. As for the Century Building, it was known for being the strongest reinforced concrete tower in the world at the time. It was also recognised for its distinct vertical expressions along with a uniquely designed facade ornament. 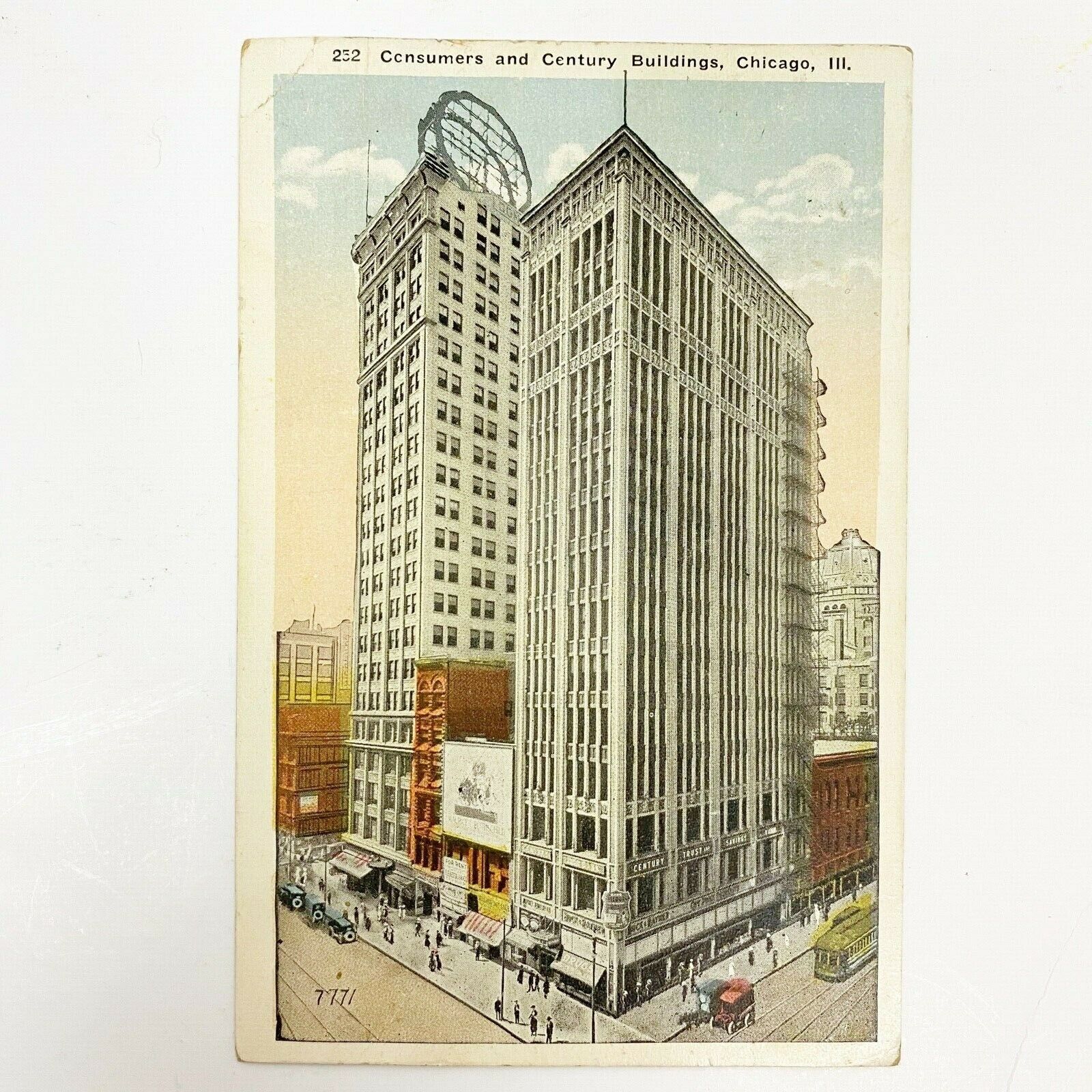 Above: A postcard of the historic Consumers and Century Towers.

But the two towers would be the last of this particular innovative style in Chicago. World War I broke out soon after and by the time it ended, the nation had dramatically transformed – along with its architectural fashions.

Over the years, several of these buildings were demolished – including the historic Home Insurance Building – to make way for new structures.

Now, the Century and Consumers buildings face a similar fate.

For decades, the pair have sat near a group of federal buildings - including a courthouse and they’ve housed a number of businesses and offices.

After the September 11 attacks along with a threat of a truck bomb to the courthouse, security fears around the area increased, and the federal government acquired the two buildings along with the surrounding block. Both were cleared of any remaining tenants.

Initially, there were plans to expand federal offices into the two towers. But that never happened.

"There was just never the funding for these structures to become federal offices," Miller said. "And by the time the funding came around, they claimed they didn't have the need for these offices."

Further ideas to create apartments were also squashed. So, with no plans for renovation ever moving forward, the government spent millions of dollars maintaining the properties while they sat empty and deteriorating.

But everything changed in 2022 when the US government set aside $52M to demolish them in a federal appropriations bill.

So, why the sudden shift in course?

"The federal government and the GSA feel that there could be a risk of security as these buildings look right into the federal center offices, some of the courtrooms and judge's chambers," Miller said.

Senator Dick Durbin, the guy who introduced the Bill, said that: “​​Ensuring the safety of the judges and employees who work in the Dirksen Courthouse must be a top priority in light of the acute security threats they face.”

But according to some architects that explanation doesn’t hold much weight. There are several cities where nearby buildings overlook federal courthouses, and they worry that demolishing structures like this could set a precedent across the country.

Experts also say that demolition isn’t a typical solution to this type of risk. Most architectural guidelines for counterterrorism efforts suggest things like mandating a 50 foot setback for federal structures, theoretically protecting them against any nearby bombings on the streets.

But it’s not just the US government’s reasoning for demolition that makes it contentious.

With so much history, the Consumers and Century buildings – along with some other nearby early Chicago towers – are currently being considered for a UNESCO World Heritage nomination. If that’s secured it would override the federal bill, legally protect the area and could bring in more tourism and money for the city. But if the buildings are demolished before then …

"It will really result in a negative and adverse opinion on our UNESCO's World Heritage Site nomination," Miller said. "And I think really does present a possible embarrassment to the federal government in the city of Chicago."

Critics argue that demolition would be a big loss economically as well. They say the city can’t afford to maintain a vacant lot – especially after struggling to lure workers back to offices which has slowed the post-pandemic recovery of the downtown area.

Ward notes, "If they're lost and that UNESCO's World Heritage nomination is lost. We're talking about the potential of millions, tens of millions of dollars, perhaps per year, maybe more."

The US federal government itself doesn’t usually get involved in these sorts of cases. Preservationists typically deal with local and city governments when it comes to building restoration and demolition – and in Chicago, they’ve usually been able to come together and make plans where both parties are happy. 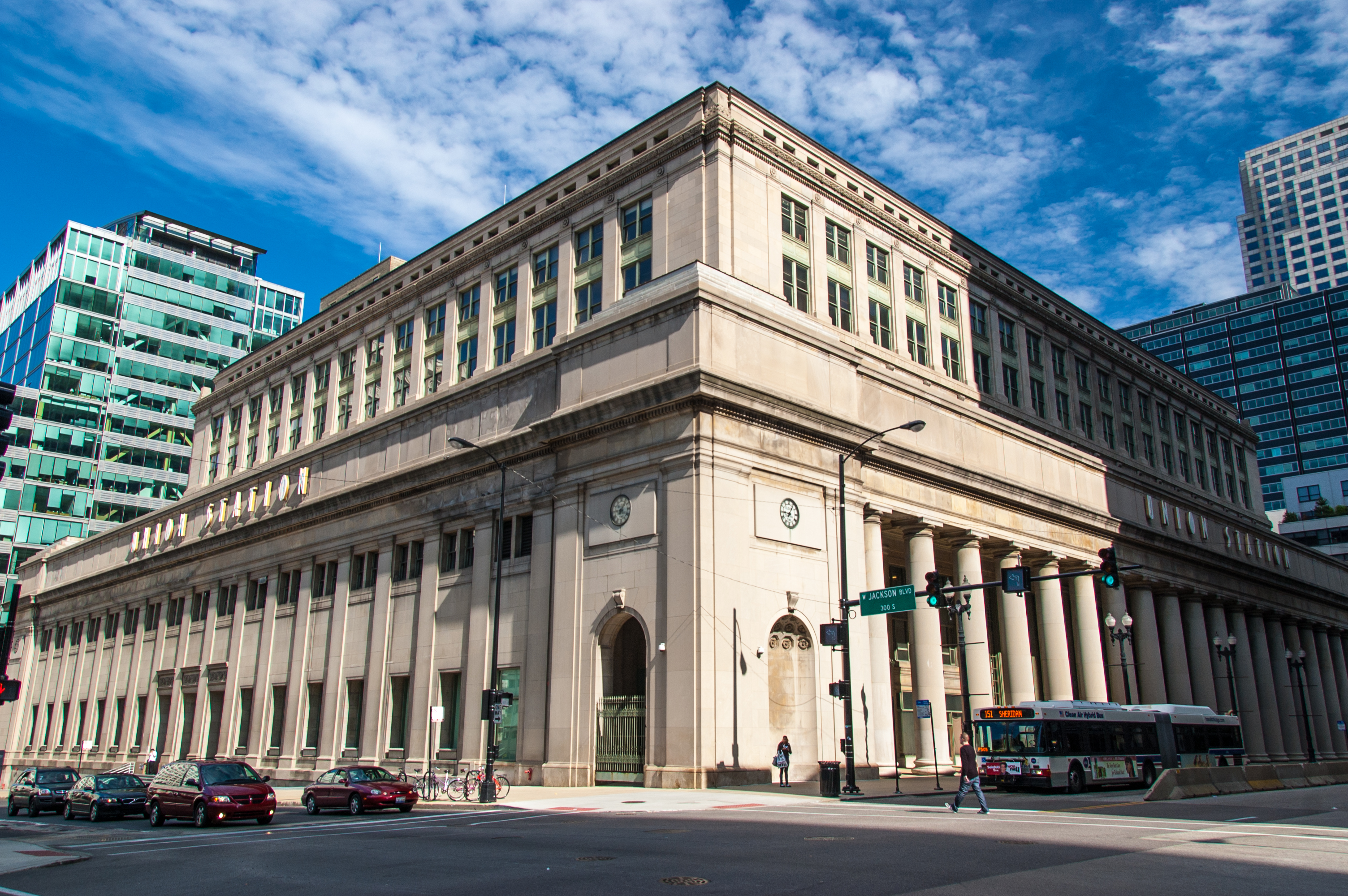 Above: Chicago's Union Station was saved due to advocacy efforts. Image courtesy of Preservation Chicago.

Ward Miller is part of one idea to save the buildings.

"We came together and thought of the idea of, of an archive facility, because archives don't need windows and they don't conform to the same code issues that residential dwellings would. And archives are very light sensitive," Miller said. "You could brick up any of the windows on the back and side elevations that would be of concern. "

Despite the push for architectural preservation, some have been critical of that stance. While there are many buildings around the world threatened by demolition – scholars believe saving some can actually slow economic growth in certain areas.

For now at least, the federal government’s plan is to proceed with the building’s removal and then keep a vacant lot.

Though it may truly improve security, in a city that prides itself on architectural history such a move would mark another loss for its iconic design style.

"We really have a lot to lose here as a city and and even as a nation," Miller said. "And so we really want to encourage our senators, the judges and all the stakeholders in the GSA to consider better ideas."