FIFA World Cup’s, like the Olympic Games, encourage a great deal of development in their host countries with numerous stadiums and support infrastructure being built ahead of the events.

Russia’s hosting of the FIFA World Cup in the summer of 2018 is no different.

As with the Winter Olympics in Sochi, Russia is investing heavily in the World Cup, spending an estimated USD $10BN building new stadiums and refurbishing existing facilities.

The 2018 tournament will see 65 matches hosted across 11 cities in 12 of the most modern stadiums in the world.

In total, seven new venues have been custom built for the World Cup, while three further stadiums are less than five years old and the remaining two have had serious upgrades to make them fit to host FIFA World Cup games.

The massive construction programme means that this FIFA tournament will be played in the most modern selection of stadiums so far. Here we countdown the best of these venues.

We kick-off in Russia’s second city, Saint Petersburg, with the 68,000-seater “Krestovsky Stadium”.

Set to host both a semi-final and the third place playoff, along with group games and a round of 16 match, the new stadium has been designed to look like a spaceship. 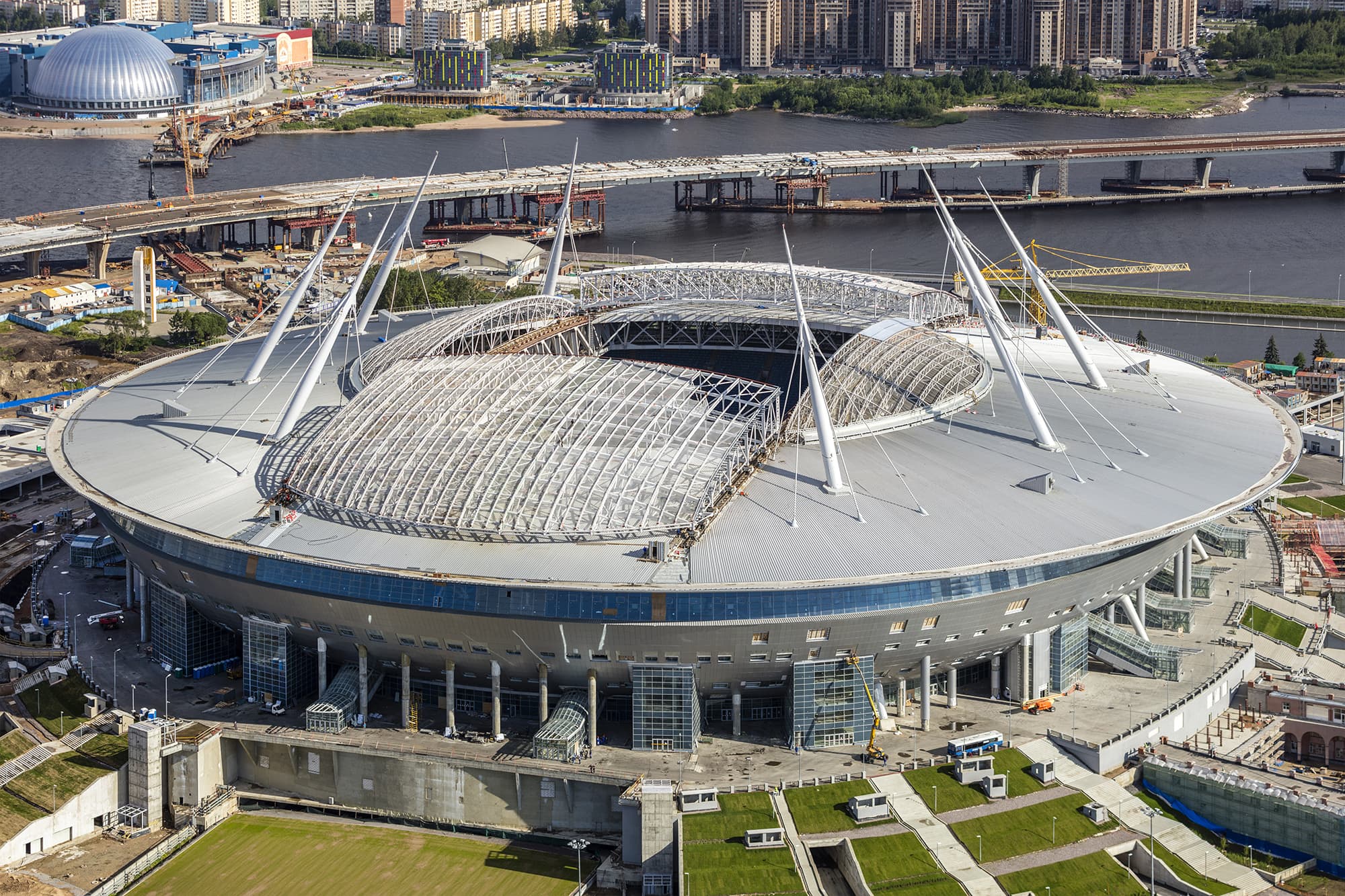 Above: The Krestovsky Stadium is set to be the most expensive football stadium ever built (image courtesy of Andrew Shiva).

A modified and enlarged version of the Toyota Stadium in Japan, the venue has unfortunately been beset by problems and is now delayed and over budget.

Heading from the north to the far south of the country, we arrive at the “Fisht Stadium” in Sochi.

Above: The Fisht Stadium will become only the second venue in history to host both the Winter Olympics and the World Cup (image courtesy of Edgar Breshchanov).

The USD $779M Fabergé egg-inspired stadium is named after the nearby Fisht Mountain.

Originally built as an enclosed facility, the 40,000-seat venue was re-opened in 2016 as an open-air football stadium and will host a quarter final, round of 16 match and four group games.

At number three on our list is arguably the best-looking stadium of the tournament, the “Cosmos Arena” in Samara.

Named "Cosmos" as the city is the centre of Russia’s space industry, the USD $370M stadium, will host six games at the World Cup including one of the Russian team’s matches.

Above: The Cosmos Arena has been designed to look like an asteroid crater.

The most interesting feature of the new 45,000 seater venue is its distinctive 65.5 metre high dome roof, which gives the stadium the look of an asteroid crater (apparently).

Up next is Russia’s largest stadium. With an incredible capacity of 81,000, the “Luzhniki Stadium” in Moscow will host seven games at 2018’s FIFA World Cup, including both a semi- final and the all-important final.

Built between 1955 and 1956, and originally called the "Central Lenin Stadium", the venue was the centre-piece of the 1980 Olympics.

The ground was renovated in 1996, and has been extensively rebuilt in preparation for the 2018 World Cup. 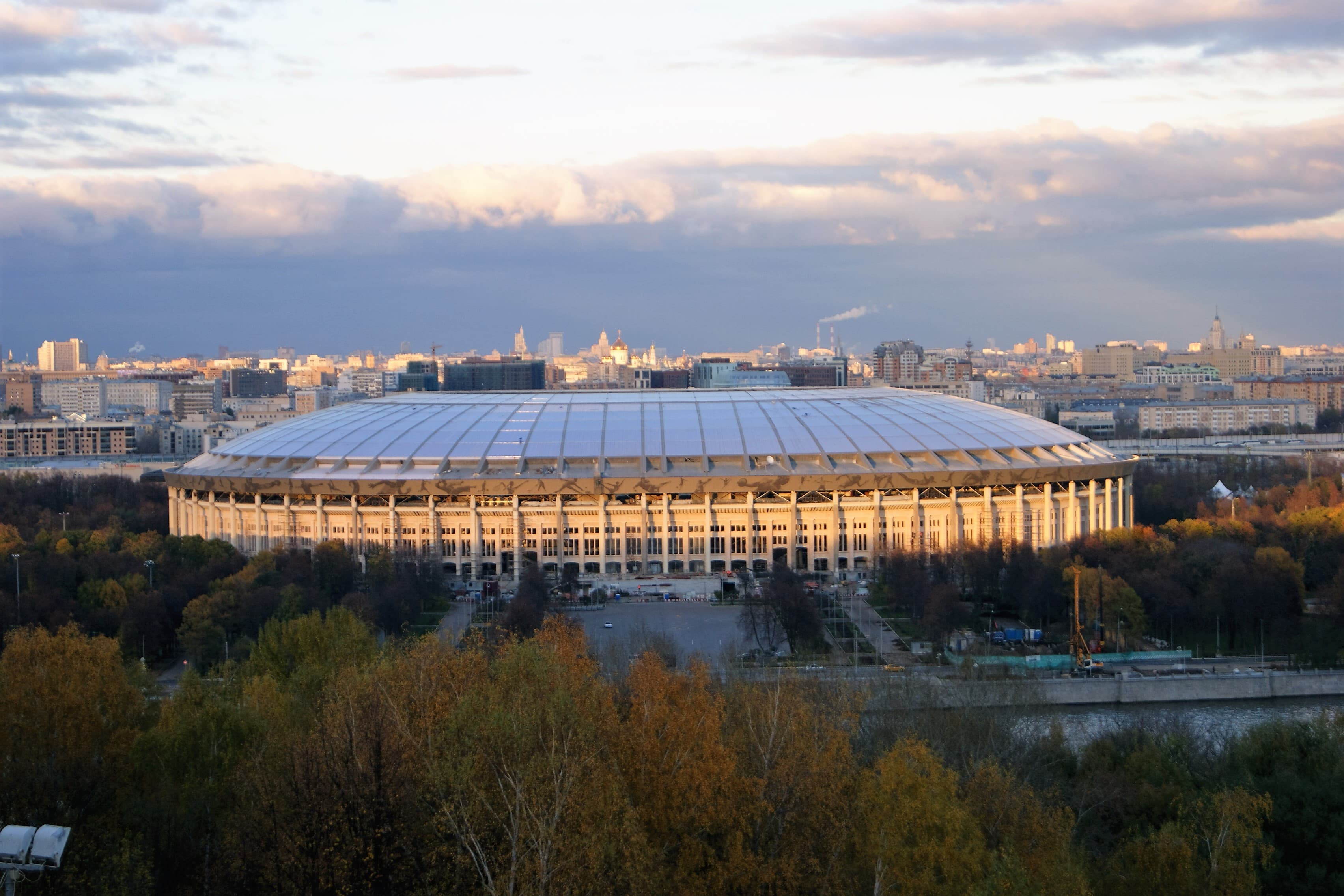 This latest USD $420M refurbishment has seen the athletics track removed, stands rebuilt closer to the pitch, and the overall capacity increased.

The result is a truly modern stadium that stands within the facades of its historic predecessor.

Topping our list is a truly innovative piece of design that will see spectators seated outside a stadium for the first time at a World Cup.

In a similar manner to the Luzhniki Stadium, the “Ekaterinburg Arena” is a modern stadium built within an existing external protected façade. 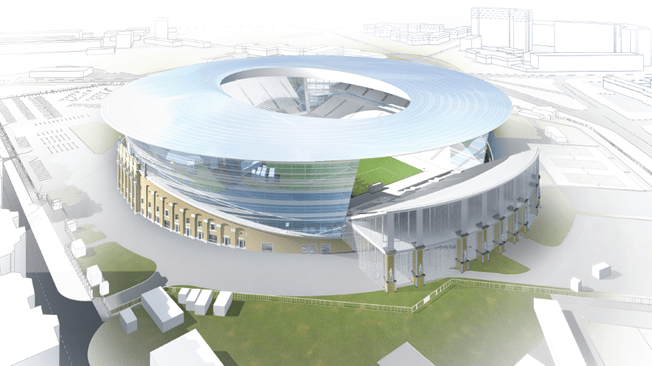 Above: Two temporary stands have been built outside of the Ekaterinburg Arena to increase its capacity (image courtesy of LOC).

However, as this venue did not have the required minimum capacity to host FIFA World Cup Games, a novel solution was required.

To increase the capacity to 45,000 – and in a move reminiscent of the temporary expansion of London’s Aquatic Centre during the 2012 Olympics – two temporary stands have been built outside the stadium behind the goals at each end of the pitch.

After the tournament, the stands will be removed and the stadium will become the home of FC Ural.