CITIES are home to the vast majority of the human population.

From housing and resources to infrastructure, education, trade and economic stability – these vast urban areas must sustain our lives.

As the human population expands and as the impact that we have on our planet becomes more apparent, it is more important than ever to get our cities right. Technology, data management and the emergence of new economic and political models are all playing a part in helping address these challenges.

The 20th century saw a shift in the distribution of the world's largest cities from North America and Europe towards Asia and Africa – and our video on the 10 largest cities by 2030, based on research by the United Nations, predicted a continuation of this trend, as rural populations are drawn to new economic hubs in emerging economies.

But what do the following 70 years hold? Where will the largest cities be by 2100 and what social, economic and infrastructure challenges will they face between now and then?

Here, we look towards the next turn of the century with powerful research from the Global Cities Institute.

Before we begin, it is important to explain that Tokyo – the world's current largest city – is nowhere to be seen on this list. For all of its technological advancements and a strong economy, Japan suffers from a low birth rate, ageing population and a policy that limits immigration. 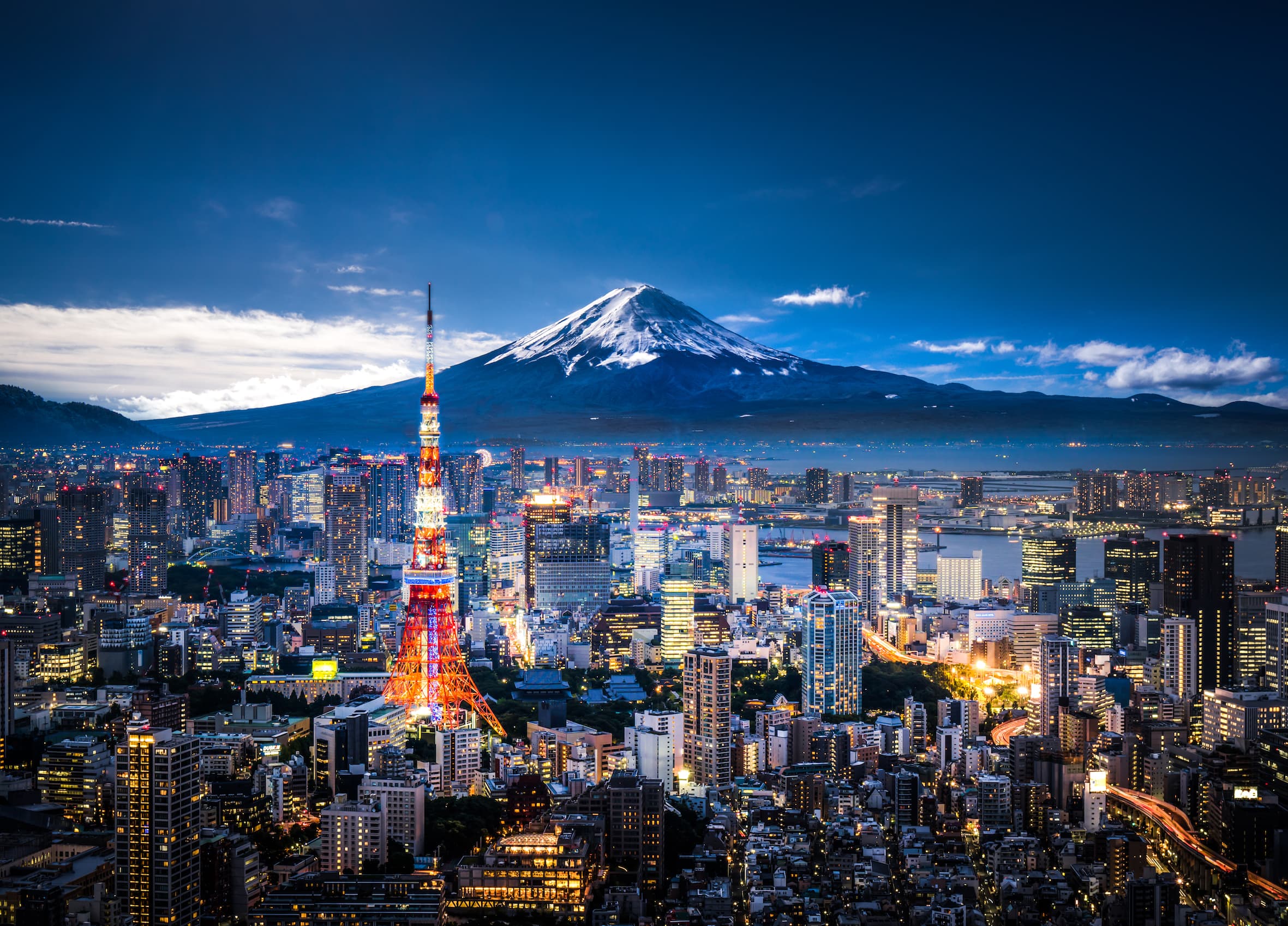 Coming in as the 90th largest city in 2010 with 3.7 million people, the Afghan capital is set to see a meteoric rise over the course of the 21st century. 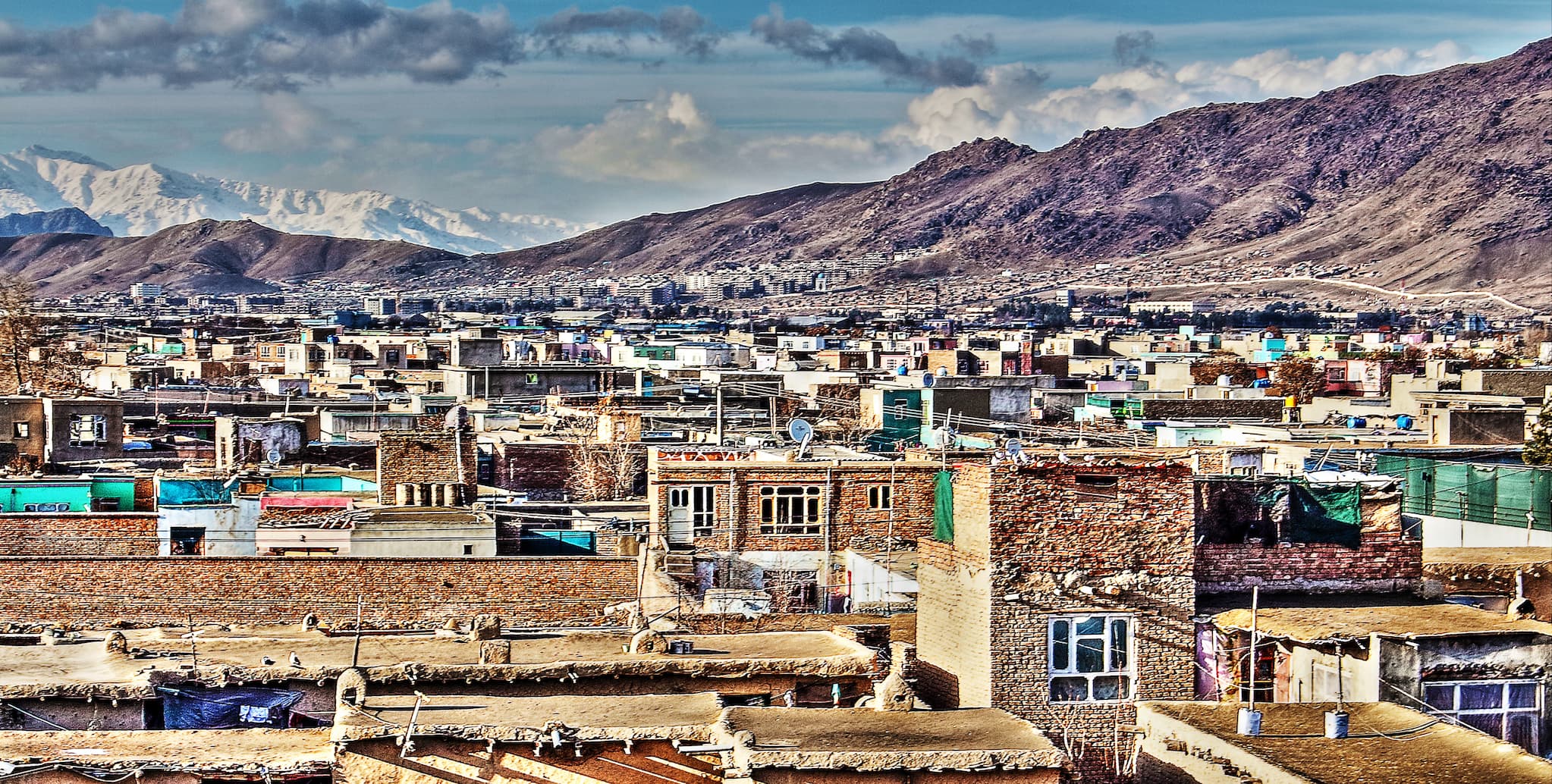 Above: The Afghan capital will witness incredible growth by the end of the century but will face many challenges as it continues to grow.

Since the early 2000s, the city has been experiencing rapid urbanisation as Afghan nationals that had fled the region return from abroad and establish a growing middle class.

Though the overall outlook has improved in recent years, Kabul is still the subject of sporadic bombings and terror attacks against civilians and officials alike, and with its population expected to hit 50.3 million by 2100, security is going to be a major challenge for the city moving forward.

As the first of three Indian entries in the top 10, Kolkata is set to become the world’s 9th largest city by 2100 with 52.4 million residents.

India’s rapid industrialisation since the 1950’s has seen cities on the sub-continent swell in size with rural populations drawn to new jobs and opportunities in urban areas.

Already a major economic centre, Kolkata is set to become the terminus of two major industrial corridors under development over the coming decades.

These corridors will link a number of cities across India, providing much-needed jobs and housing for India's booming urban populations.

With a growing number of climate refugees, Dhaka's population is set to hit 54.3 million people by the turn of the century.

Already suffering from severe congestion – and currently holding the title of the world’s most densely populated city – Dhaka will require significant investment into its road and transport networks if it is to cope with its projected growth, a task further complicated by its positioning a mere 12 metres above sea level.

While relatively unknown today, the capital of the West African country of Niger, Niamey, looks set to see the highest level of growth of any city in the top 10.

With a high birth rate and an exodus of rural populations into the city due to regular droughts, Niamey’s population is expected to explode from a mere 2.1 million people in 2010 to over 56 million by 2100.

With the Sahara expanding as a result of climate change, Lake Chad a shadow of its former self and the Niger River as the city’s only reliable source of water – providing a sufficient, clean and fresh supply for its population will be a critical challenge in the coming decades.

Another lesser-known city to appear on the list by 2100 is Khartoum in Sudan.

While home to a modest 5.1 million people in 2010, the city will become home to 56.6 million residents by the end of this century. 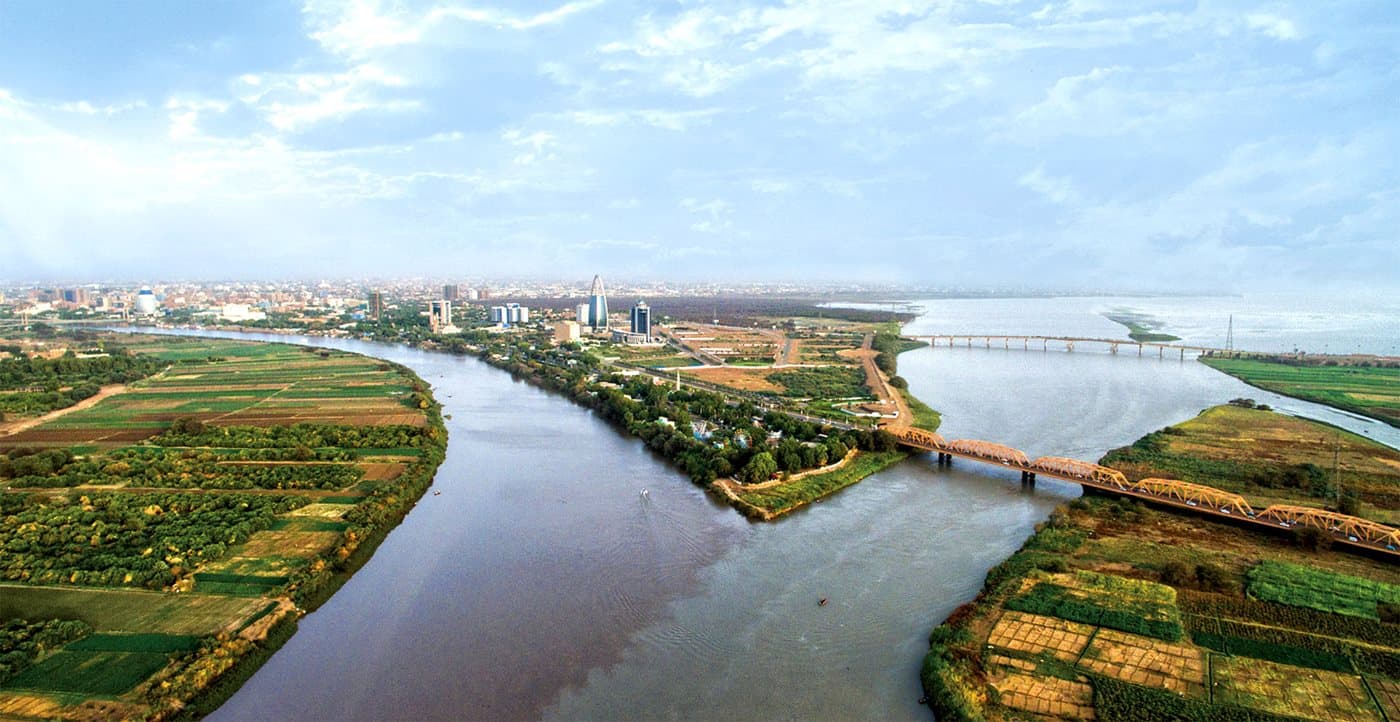 Above: Its position on the Blue and White Nile makes Khartoum ideal for growth in a country that is half desert.

With Khartoum's position at the junction of the Blue and White Nile Rivers providing much needed water security in a country where 50% of the land is desert, the city is well positioned to absorb much of the growth in the region as rural populations head to urban areas, a trend set to occur across the African continent.

Having held second place in 2030, Delhi will remain a major draw for rural populations throughout the next 80 years.

A number of projects are currently underway to modernise the city and the expansive USD $100BN Delhi-Mumbai Industrial Corridor (DMIC) is set to transform the entire region by 2100. 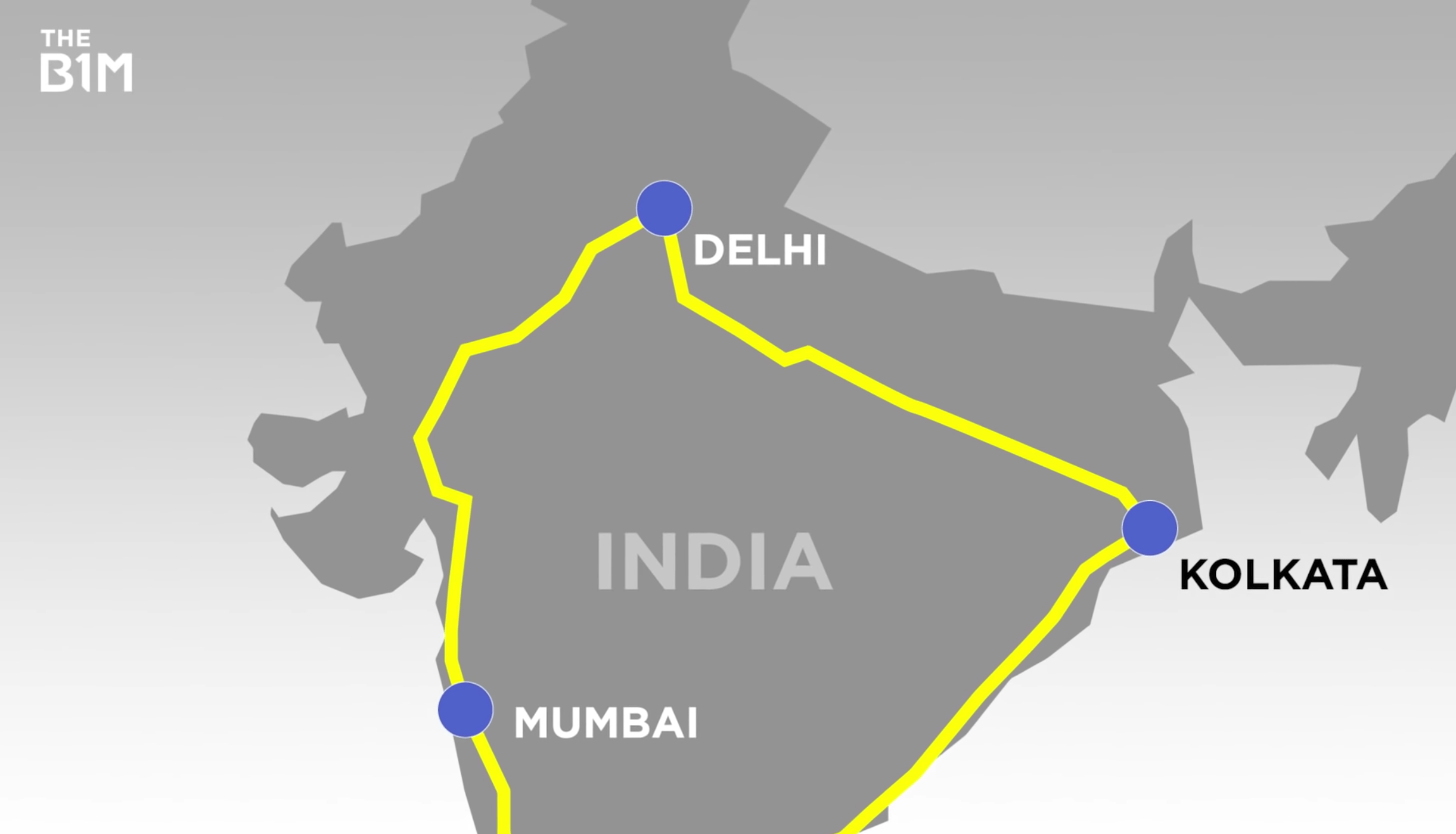 Above: The industrial corridors planned to link Indian cities will play a significant role in the future growth of cities on the subcontinent.

However, growth in some other parts of the world will far outstrip that of the Indian capital, leading to it fall to 5th place in 2100 with 57.3 million people.

Predicted to become the world’s largest city by 2050, it is thought that Mumbai will then slip back to 4th place by 2100.

Retaining its status as one of the most important ports in the country and the financial heart of India, Mumbai will still draw millions of new residents.

As the industrial corridors connecting it to Delhi and Bangalore look set to place it at the centre of an industrial and manufacturing mega-region, the city’s influence will only increase.

Following a construction boom since the early 2000s, Dar Es Salaam has grown significantly in both population and regional influence. 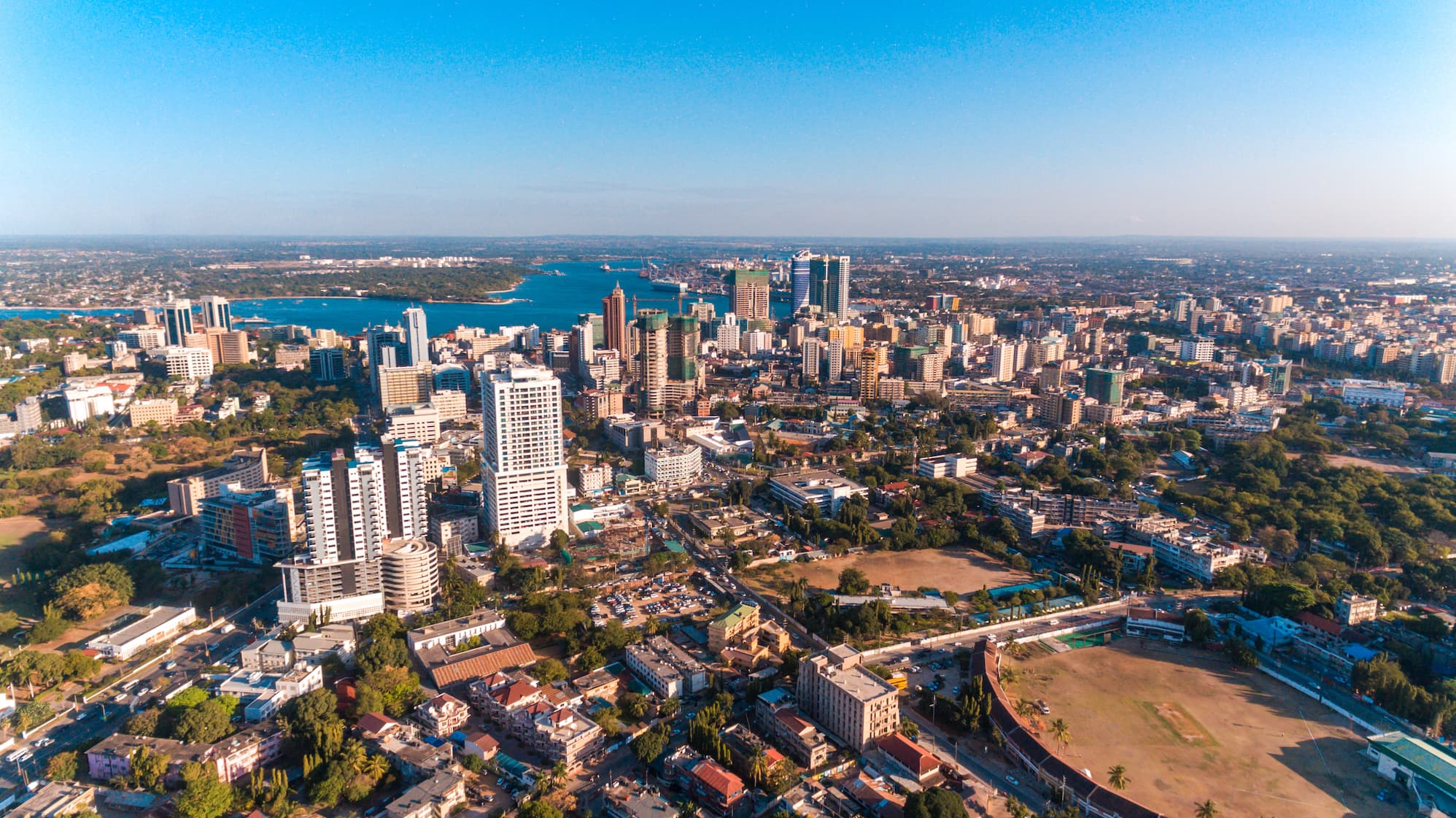 Above: Dar Es Salaam will play a major role as a gateway for Africa's landlocked emerging economies.

Already one of East Africa's busiest ports, the city will continue to grow and act as a gateway to the global markets for neighbouring landlocked countries like Rwanda, Malawi and Zambia.

Overtaking Paris as the largest French-speaking city in the world by 2020, Kinshasa in the Democratic Republic of the Congo will have a larger population than the entire nation of France by 2100.

With around 60% of its citizens expected to be under the age of 18 by 2025, Kinshasa will face significant challenges regarding education and employment as its population continues to soar.

Set to become home to more than 88 million people – equivalent to the entire populations of present day Denmark and Germany combined – Lagos in Nigeria will be the largest city in the world by 2100. 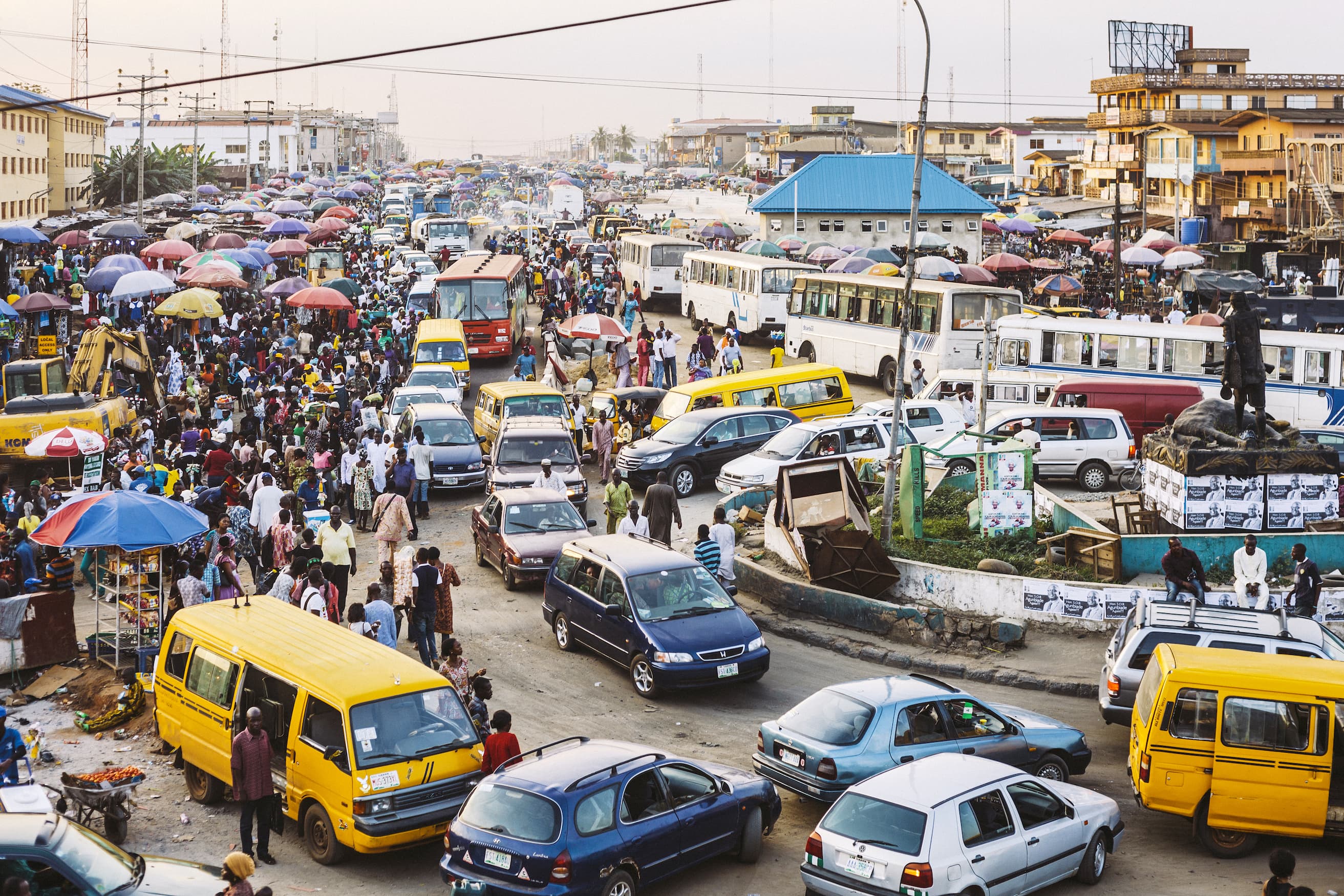 Above: Lagos will be the largest city in the world by 2100.

Already one of the fastest growing urban areas on Earth and as a centre of trade and finance in West Africa, Lagos is preparing to undergo a vast transformation over the next 80 years.

The city has embarked on a number of projects to drastically increase living standards and improve its infrastructure. 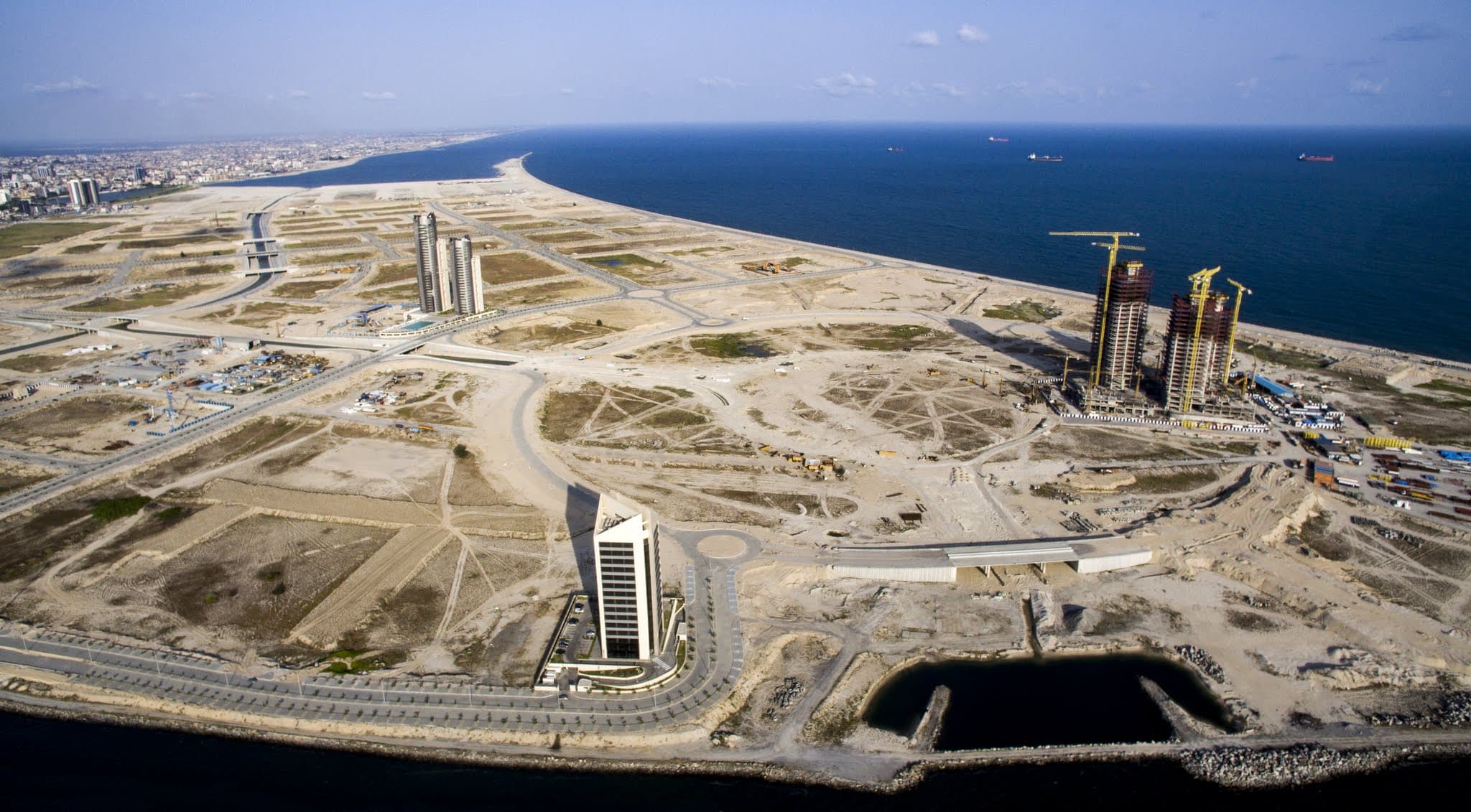 Above: Eko Atlantic is a city changing project that is providing new residential and commercial opportunities in Lagos while simultaneously reestablishing the eroded coastline. Image courtesy of Eko Atlantic.

The first line of the Lagos Rail Mass Transit system is set to become operational by 2022, while “Eko Atlantic” a 10 square kilometer area of reclaimed land, will create new modern residential and commercial districts protecting the city from the effects of climate change and re-establishing more than 100 years of eroded coastline.

Perhaps the most surprising part of the Global Cities Institute’s projections is the complete absence of European, North American and Chinese cities in the top 10. 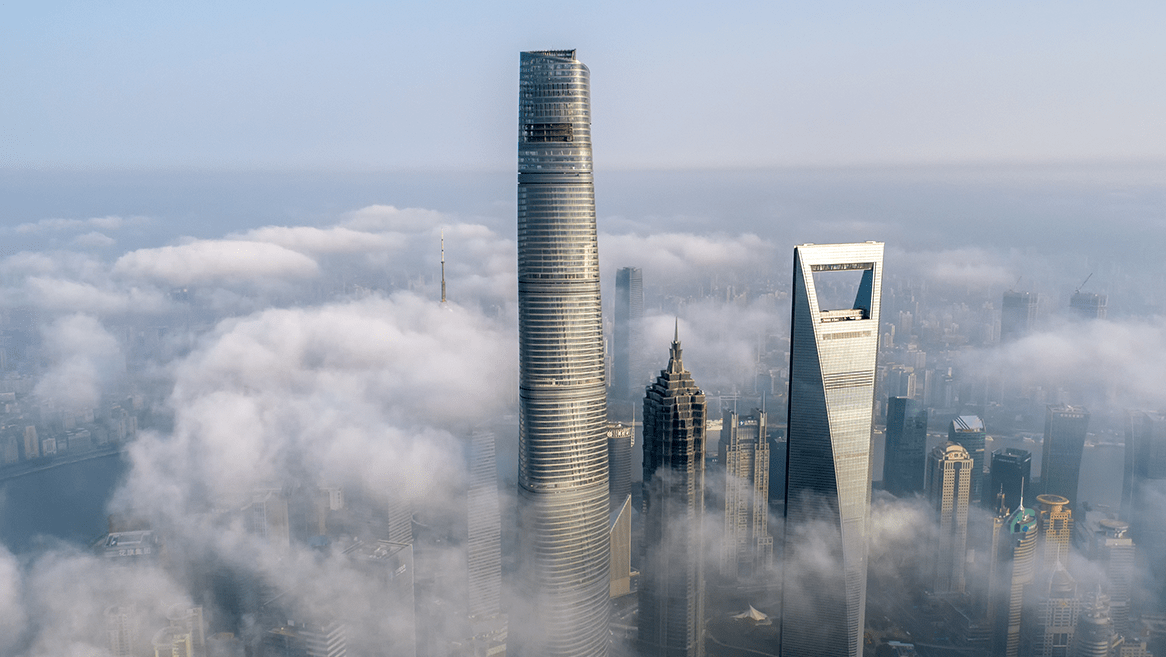 Above: Shanghai and all other Chinese cities will fall out of the Top 10 by 2100 as China's population levels off.

China’s largest city Shanghai, which is predicted to be the world’s third largest city by 2030 will only manage to take 37th place by the end of this century, while Beijing follows a similar trend falling to 52nd place by 2100.

While some see the projected growth of cities across the developing world as unsustainable, history has demonstrated that a natural levelling in growth follows all emerging economies as they become more established.

Just as we saw cities across Europe and North America dominate the top 10 in the late 19th and 20th centuries, their success led to a natural decrease in the size of families and a slowdown in overall population growth. 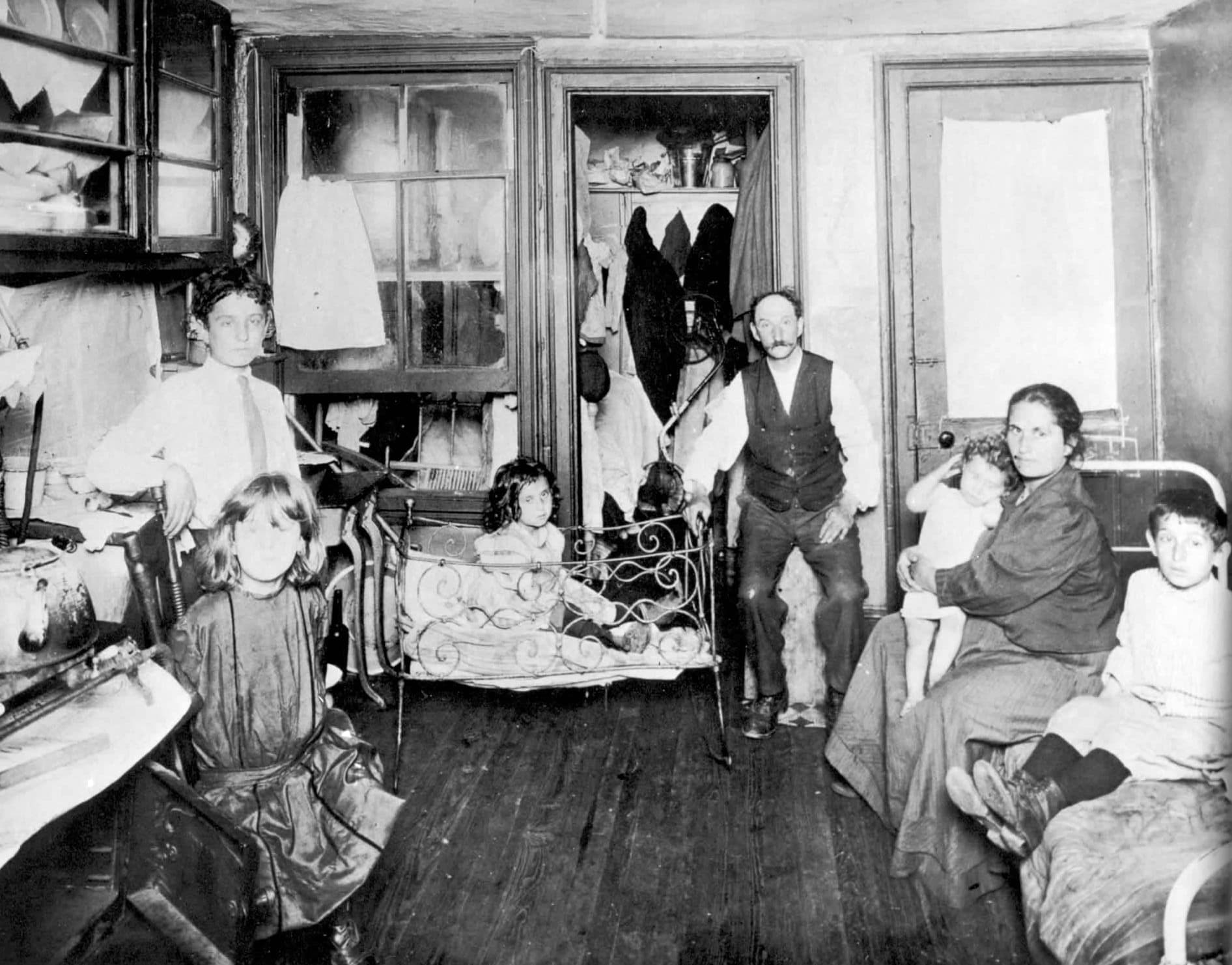 Above: New York City went through a period of overpopulation and poor living conditions at the dawn of the industrial revolution.

Rapid industrialisation can draw large numbers of rural families to cities, leading to a sharp rise in population.

Many new arrivals can be forced into poor living conditions, such as those seen in London and New York at the start of the industrial revolution.

As time goes on, living standards improve and infrastructure catches up. People no longer need large families to support one another or to run the labour-intensive rural industries they did before. 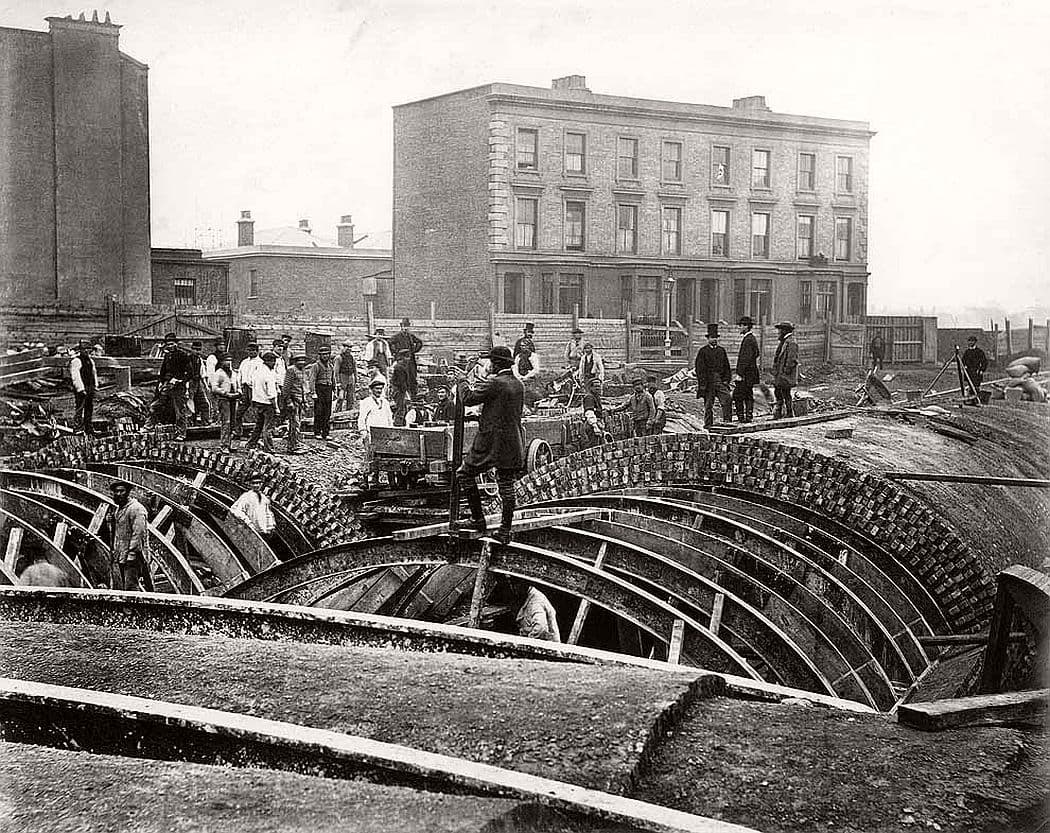 Above: The construction of London's Underground has significantly increased the standard of living in the British capital since the 1860s.

Combined with a higher cost of living, birth rates naturally slow as people actively choose to have fewer children.

So while India and Africa look set to witness extreme growth, they are likely to go through a similar process over the 22nd century naturally levelling their populations as living standards improve.