FROM the Statue of Liberty to the Empire State and Chrysler Buildings, the Big Apple is a city of landmarks.

But while these structures give the city that never sleeps its identity, it is the bridges spanning the city’s waterways that quite literally unite the five boroughs and keep this vast metropolis moving.

Standing the test of time, shattering records and uniting millions, these are the iconic crossings of New York.

Starting at the entrance to New York Harbor and linking Staten Island to Brooklyn, the Verrazzano-Narrows Bridge became the most recent of New York’s crossings to have held the title of world's longest bridge when it first opened in 1964.

With a central span of 1,298 metres, the bridge was so long that its engineers had to rethink its design in order to avoid the bridge tearing itself apart in strong winds.

As with any large object, bridges impede wind flow, creating turbulent vortices and regions of varying pressure around their structure.

While this phenomenon creates a back and forth motion in vertical structures like skyscrapers, for bridge decks the variations of high and low pressure cause the deck to rise up and pull down, bending and flexing it to the point of collapse as was the case with the infamous Tacoma Narrows bridge, which collapsed due to high winds in 1940.

While single-deck bridges can overcome this by creating a more streamlined profile that channels winds over and under the structure, the same method can’t be used for double deck bridges like the Verrazzano-Narrows as the turbulence created between the decks further amplifies the phenomenon and would create dangerous conditions for drivers.

We've used SimScale to simulate how wind passes around the structure with areas of high wind speed shown in red.

Above: How wind passes around the structure with areas of particular intensity shown in red (image courtesy of SimScale).

To address this challenge, engineers devised a system of rigid steel lattice structures that stiffened the deck, allowing wind to pass through the open roadway and making the bridge capable of resisting even the strongest Atlantic storms.

Despite the UK’s Humber Bridge overtaking it as the world's longest in 1981, Verrazzano-Narrows remains the longest bridge in the Americas to this day.

With more than 150,000 users worldwide, SimScale is an easy-to-use cloud-based engineering simulation platform that enables everyone to create powerful, high-fidelity simulations in a web browser.

The platform can be tried for free through the Community account, which gives access to thousands of public simulations to promote knowledge sharing and to crowdsource advice.

Arguably the most famous New York crossing of all, the Brooklyn Bridge is one of three suspension structures - along with the Manhattan and Williamsburg bridges - that cross the East River to connect Manhattan with Brooklyn. 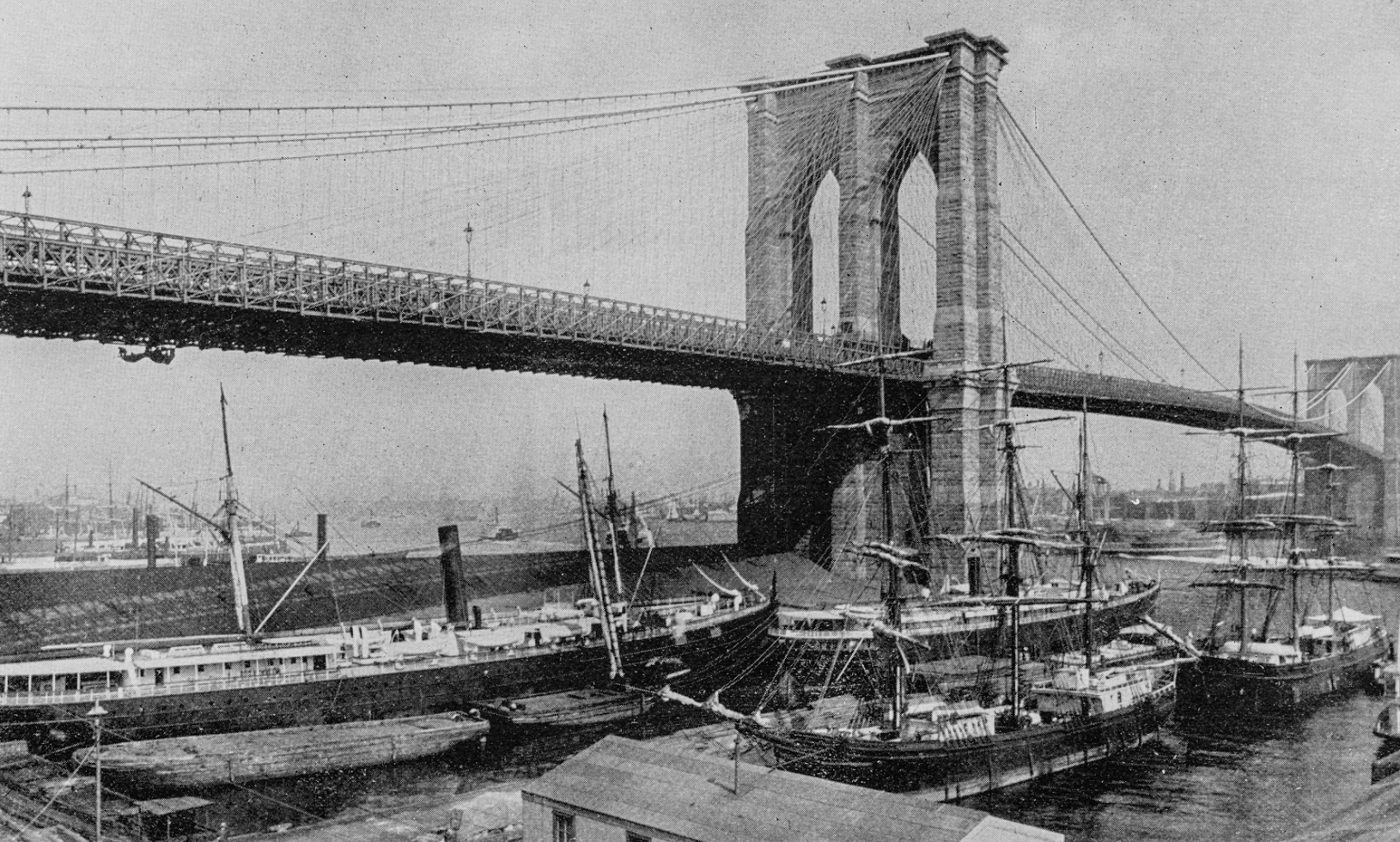 Above: When it was completed in 1883, the Brooklyn Bridge was the longest bridge in the world.

It provided the first permanent crossing between New York’s commercial centre in Lower Manhattan and the bulk of the city’s 19th-century workforce.

While often referred to as a suspension bridge, it is, in fact, a hybrid structure, utilising elements of both suspension and cable-stayed bridge design.

Standing 85 metres high, the Brooklyn Bridge’s gothic-inspired granite towers were the defining feature of the city when the crossing first opened, dominating the skyline until the advent of the skyscraper.

Now consisting of a pair of cable-stayed bridges, the original Kosciuszko Bridge was constructed in 1939 to connect Brooklyn and Queens over Newton Creek.

Designed to carry 10,000 vehicles each day when it first opened, the decision to replace the ageing structure was made in 2009 when the bridge was carrying 18 times its intended capacity.

Above: The twin Kosciuszko Bridges after opening in 2019 (image courtesy of Max Touhey).

In 2014, works began to construct a new five-lane eastbound bridge adjacent to the existing structure.

In order to construct the westbound bridge the original Kosciuszko Bridge was destroyed in a controlled demolition on October 2017, the first time such a method was used on a bridge in New York City.

The eastbound bridge carried traffic in both directions during the construction of its westbound counterpart, before both bridges opening in their intended directions in August 2019.

Linking Manhattan and the borough of Queens, the aptly-named Queensboro Bridge was officially renamed in 2011 to commemorate a former New York City Mayor, becoming the Ed Koch Queensboro Bridge.

Of the four major structures that cross the East River, the Queensboro Bridge is the only one to deviate from the suspension model. 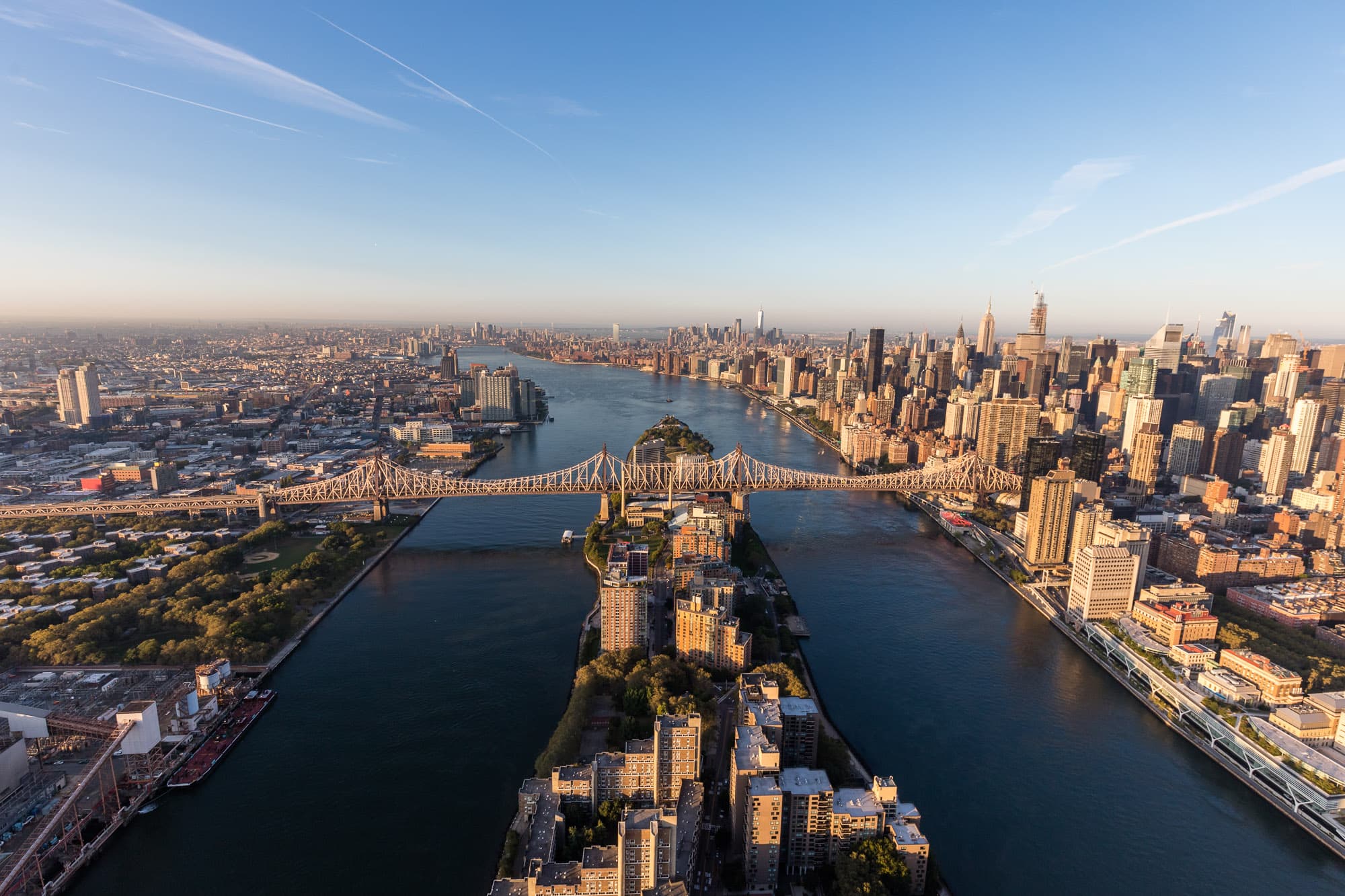 Above: A cantilever design was chosen to carry the bridge's double-deck roadway (image courtesy of Max Touhey).

With construction works first commencing in 1901, the bridge took until 1909 to complete due to a series of delays brought about by labour disruptions and the partial collapse of one of the cantilevered spans.

While construction accidents during the early 20th century were common by today's standards, the collapse of the Queensboro Bridge was the result of a storm rather than human error.

Built in 1917, the Hell Gate Bridge is the longest of the three bridges that form the Hell Gate Railroad Viaduct running through Queens and The Bronx.

While it was intended to operate as a four-track freight and passenger crossing, one of its freight tracks was abandoned in the 1970s and it is now used predominantly for passenger services.

Though relatively small in scale, the Hell Gate Bridge’s design proved so iconic that it became the inspiration for one of the world's most recognisable structures, the Sydney Harbour Bridge in Australia.

Named after the first US President, the George Washington Bridge is the only structure in New York City to cross the Hudson River, with all other crossings from Manhattan to New Jersey running through tunnels or via ferry.

Opened in 1931, the 1,450-metre suspension structures held the title of world's longest bridge until it was surpassed by the Golden Gate Bridge in 1937.

Above: The George Washington Bridge was once the longest bridge in the world until it was surpassed by the Golden Gate Bridge ( image courtesy of Max Touhey).

Designed by Cass Gilbert, the architect behind the city’s iconic Woolworth Building, the bridge’s original design called for its towers to be clad in granite.

However, due to shifts in design trends and as a cost-saving measure, these plans were dropped leaving the robust steel lattice that was designed to carry the extra intended weight as the bridge’s defining feature.

This video was powered by SimScale. Narrated by Fred Mills. Additional footage and images courtesy of SimScale, Max Touhey and Pete Herron.

Find thousands of ready-to-use simulation templates created by SimScale's users which you can copy and modify for your own analysis -https://www.simscale.com/projects/

Discover the Community, Professional and Enterprise Plans from SimScale - https://www.simscale.com/product/pricing/