WHEN it first opened in 1913, the 241 metre Woolworth Building in New York City was the tallest skyscraper in the world.

Providing 57 storeys of commercial office space within its neo-gothic inspired design, the building was seen as a monument to capitalism and quickly became dubbed the “Cathedral of Commerce”.

Though it lost the title of the world's tallest tower in 1930, the Woolworth Building remained an iconic symbol of New York throughout the 20th Century, gaining national landmark status in 1966.

However, as the 21st Century dawned and commercial office environments evolved, the tower’s appeal became limited by its own design.

In response, developers looked for ways to reinvent this iconic structure, retaining its heritage whilst making it viable in a new age. 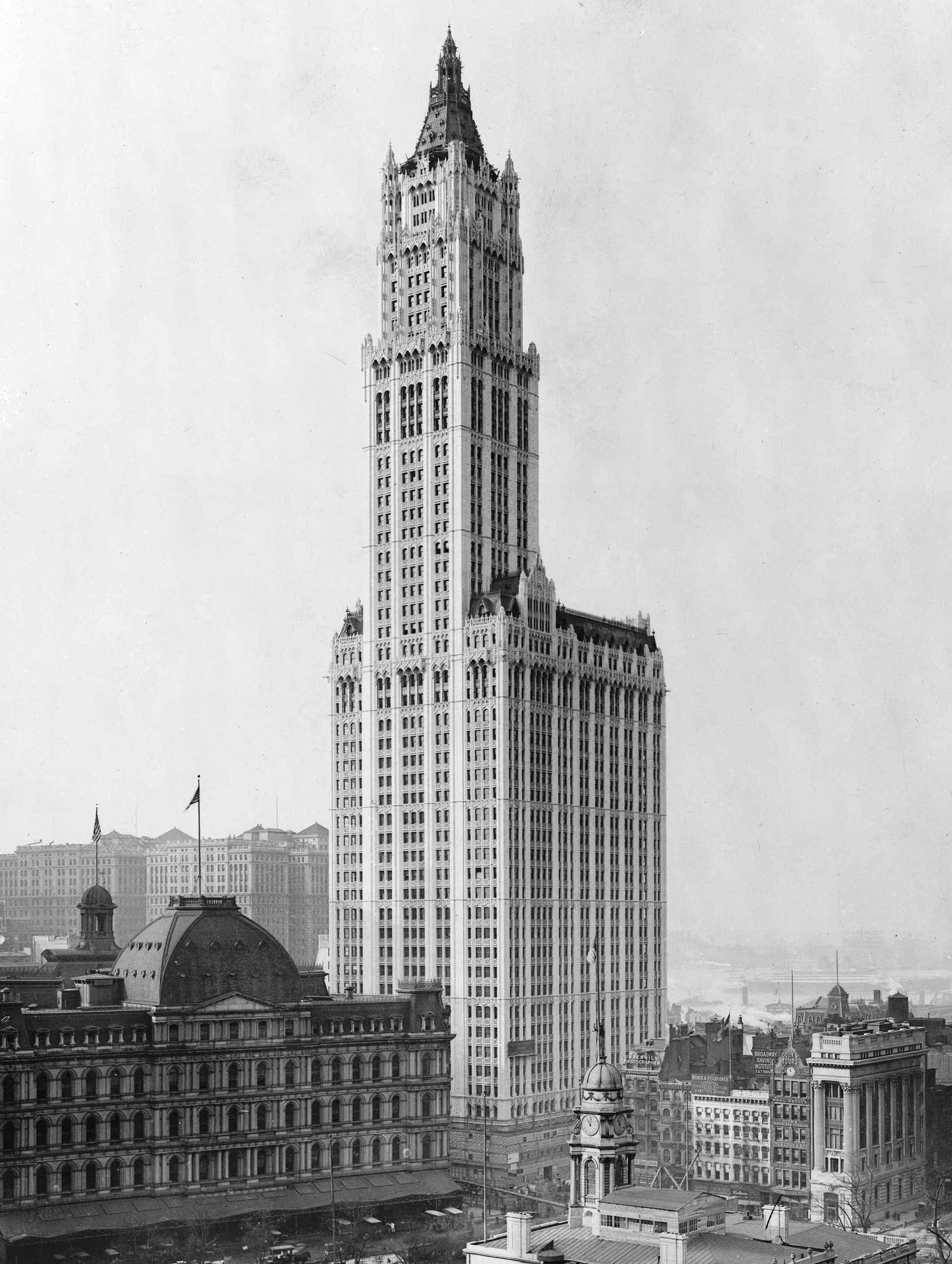 Above: The Woolworth Building was dubbed the "Cathedral Commerce" when it opened in 1913 and took the title of the world's tallest skyscraper (image courtesy of United States Library of Congress Prints and Photographs Division)

When skyscrapers first rose to prominence, they were widely seen as symbols of corporate power with executive management occupying the uppermost floors in a literal statement of hierarchy that continued for much of the 20th Century.

But in the early 2000s, corporations began to move away from this vertical segregation of departments and instead embraced more open layouts where employees could interact and engage with their teams. 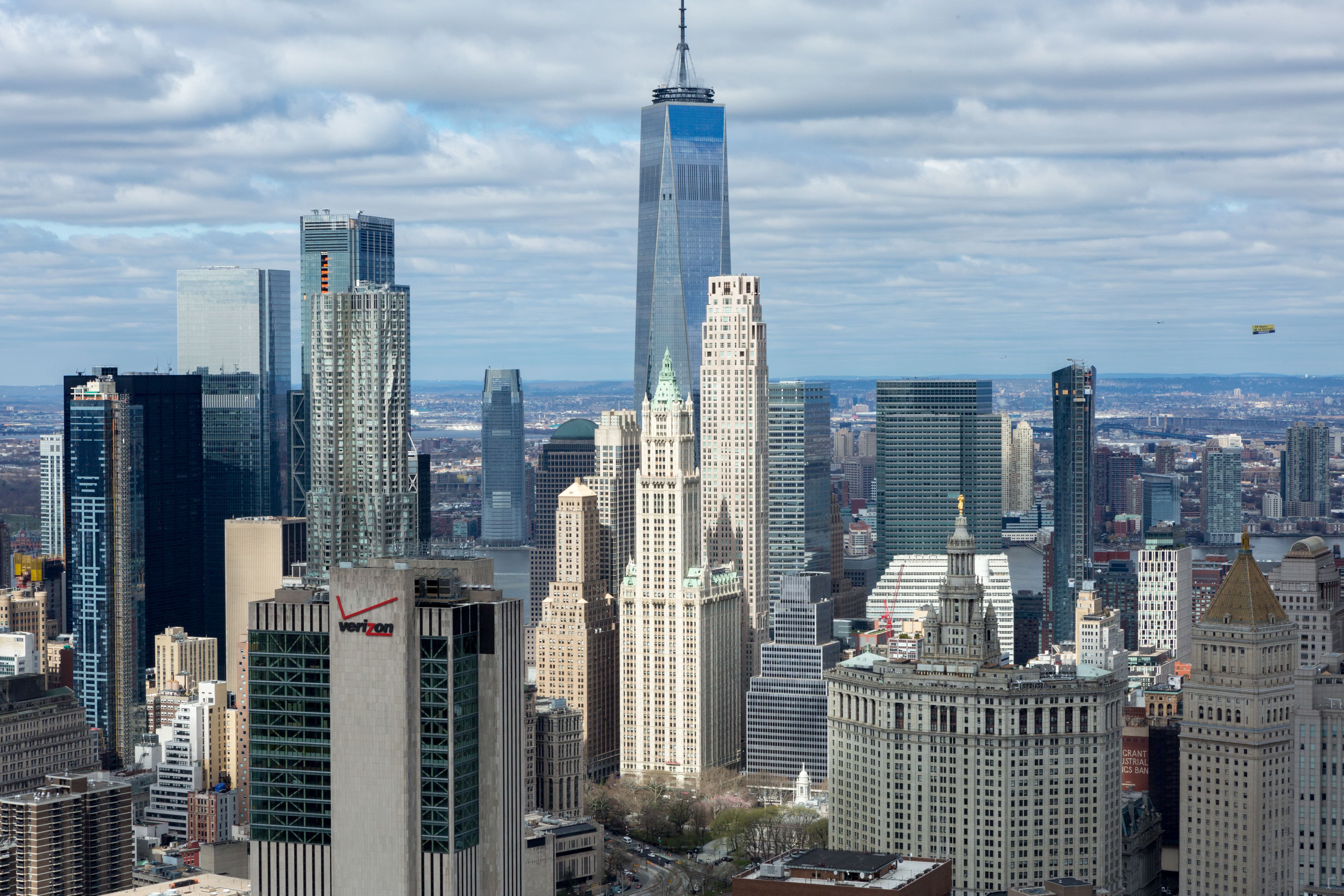 Above: As corporations moved towards buildings with larger floor-plates, the narrower upper floors of the Woolworth Building became less desirable for commercial tenants (image courtesy of Andrew C Nelson).

While the design of the Woolworth Building was revolutionary for its time, its narrower upper floors were not able to meet the demands of modern day commercial tenants seeking these new, open plan layouts.

In 2012, as the world recovered from the Global Financial Crisis of 2008, Alchemy Properties purchased the top 30 storeys of the Woolworth Building with plans to convert them into luxury residential apartments; a commodity that was becoming highly sought after in Manhattan.

Consisting of 33 units – including a five storey “Castle in the Sky” penthouse worth USD $110 million – the Woolworth Residences were set to become the most expensive in the Downtown area. 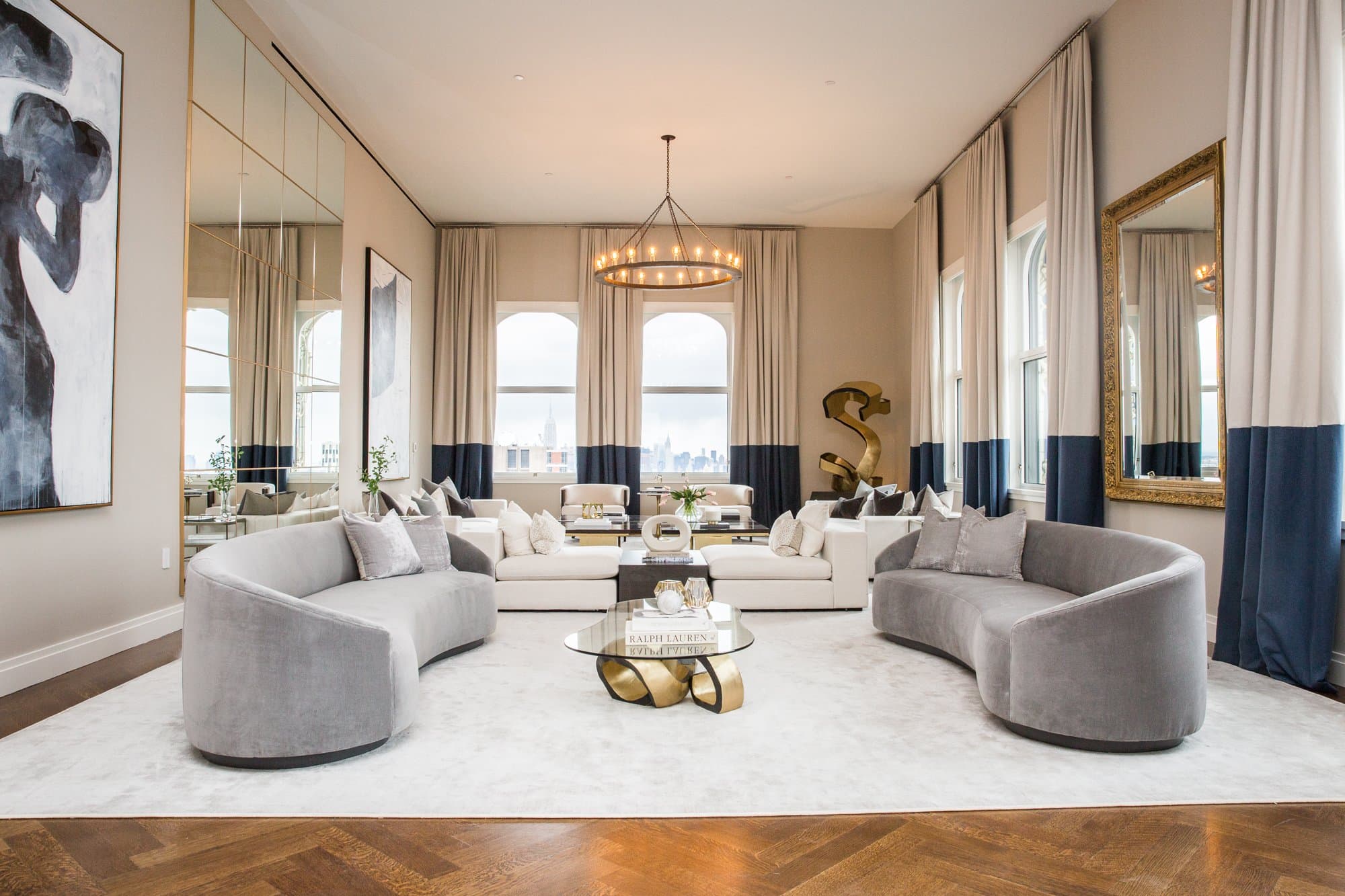 Above: The new apartments in the Woolworth Building set records for the Downtown area (image courtesy of Sarah Jacobs).

While numerous high-rise residential projects were under development across the city – primarily in the Midtown area that would later become known as “Billionaire’s Row” – the Woolworth Building stood out for its historic status and intricate neo-Gothic architecture that couldn’t be replicated elsewhere.

However, the unique structure presented the development team with unique challenges that other new build schemes were able to avoid.

The highly built-up surroundings and ornate design of the Woolworth Building meant that erecting a crane adjacent to the tower or on its roof was simply not possible.

Concurrently, the lower 28 levels of the building, occupied by commercial office tenants, were to remain in use throughout the conversion works on the residences. 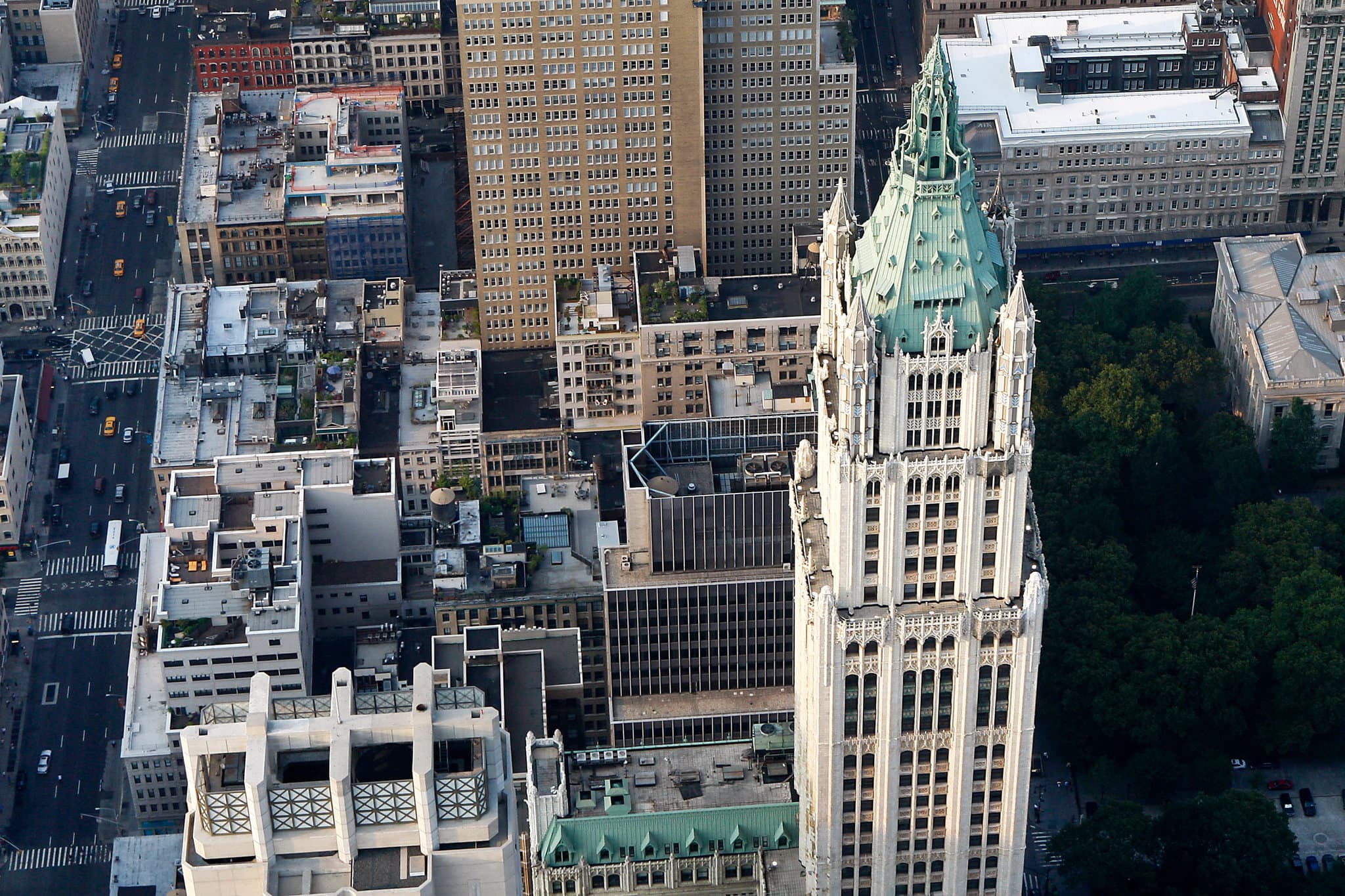 Above: The ornate roof of the building meant erecting a crane for renovation works was not possible (image courtesy of Keyur Khamar).

To overcome these challenges, the project team had to ensure that all materials and equipment specified could fit within the internal lift shafts of the tower, before installation at their intended floor.

With the Woolworth Residences occupying the upper levels of a commercial building, the need to separate residents from office tenants was a primary concern for developers.

Before works to create the apartments could commence, suitable access had to be secured. Whilst a dedicated new entrance lobby off Park Place was one step, transporting residents upwards, proved considerably more complex.

The highest office floor on level 28 of the tower was only accessible by three elevators, all of which were housed within shafts that extended up to the 49th Floor. 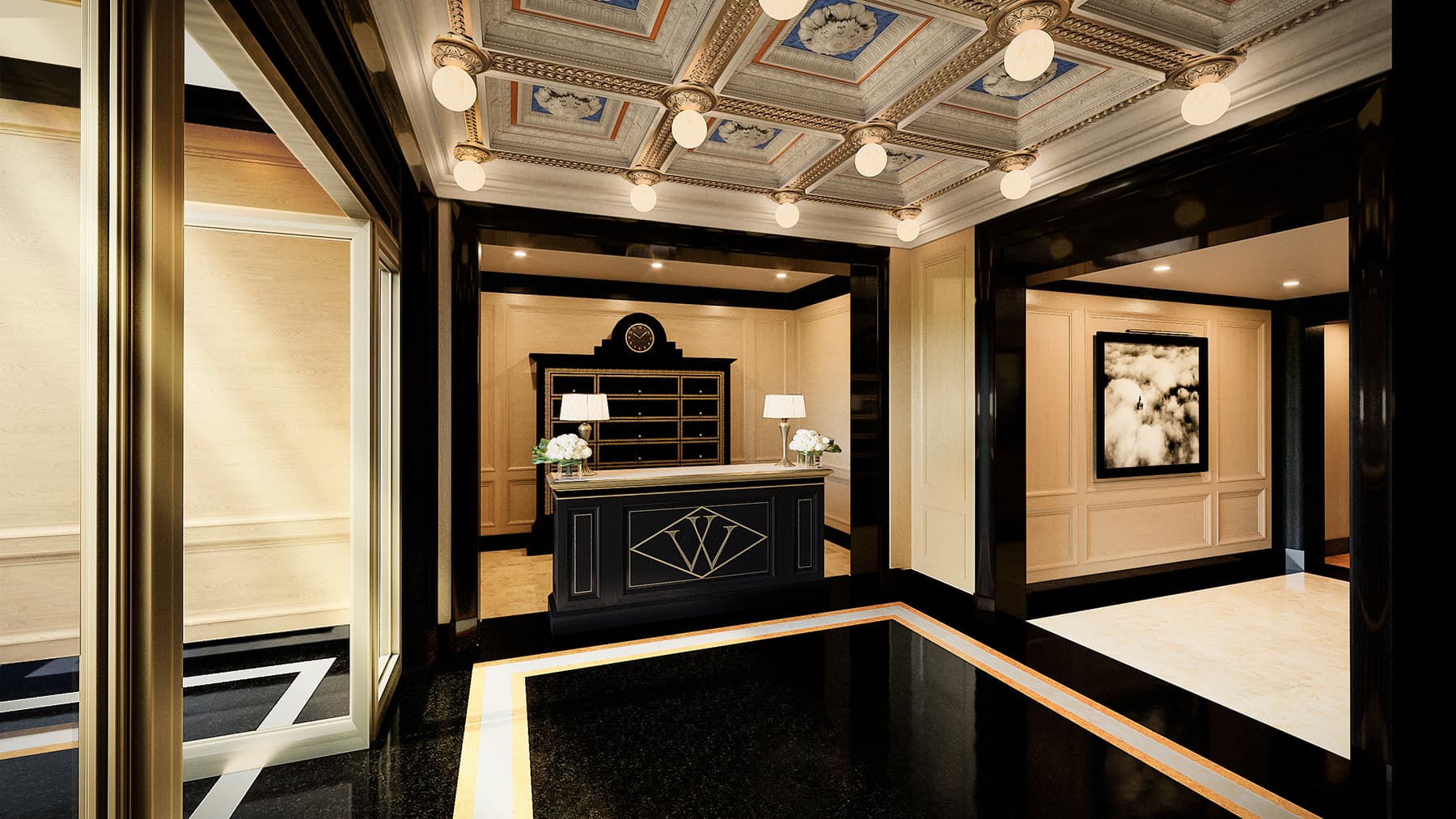 Above: A dedicated entrance lobby for residences was required to separate the commercial and residential parts of the building ( image courtesy of Alchemy Properties).

These needed to be moved to create dedicated access for the residences and separate access for the offices, avoiding the need for elevator cars to be shared between office tenants and residents.

But with the commercial areas of the building remaining occupied during renovation works on the upper levels, only one elevator shaft could be taken out of service at any one time. As such, all work to move the elevators and their associated mechanical plant had to be undertaken out of hours when the offices were not occupied.

As early elevator systems were much slower and smaller than their modern-day equivalents, many older skyscrapers typically have an oversupply of elevator shafts, as compared to new structures.

Following numerous elevator upgrades throughout its life, the Woolworth Building had a number of vacant shafts. 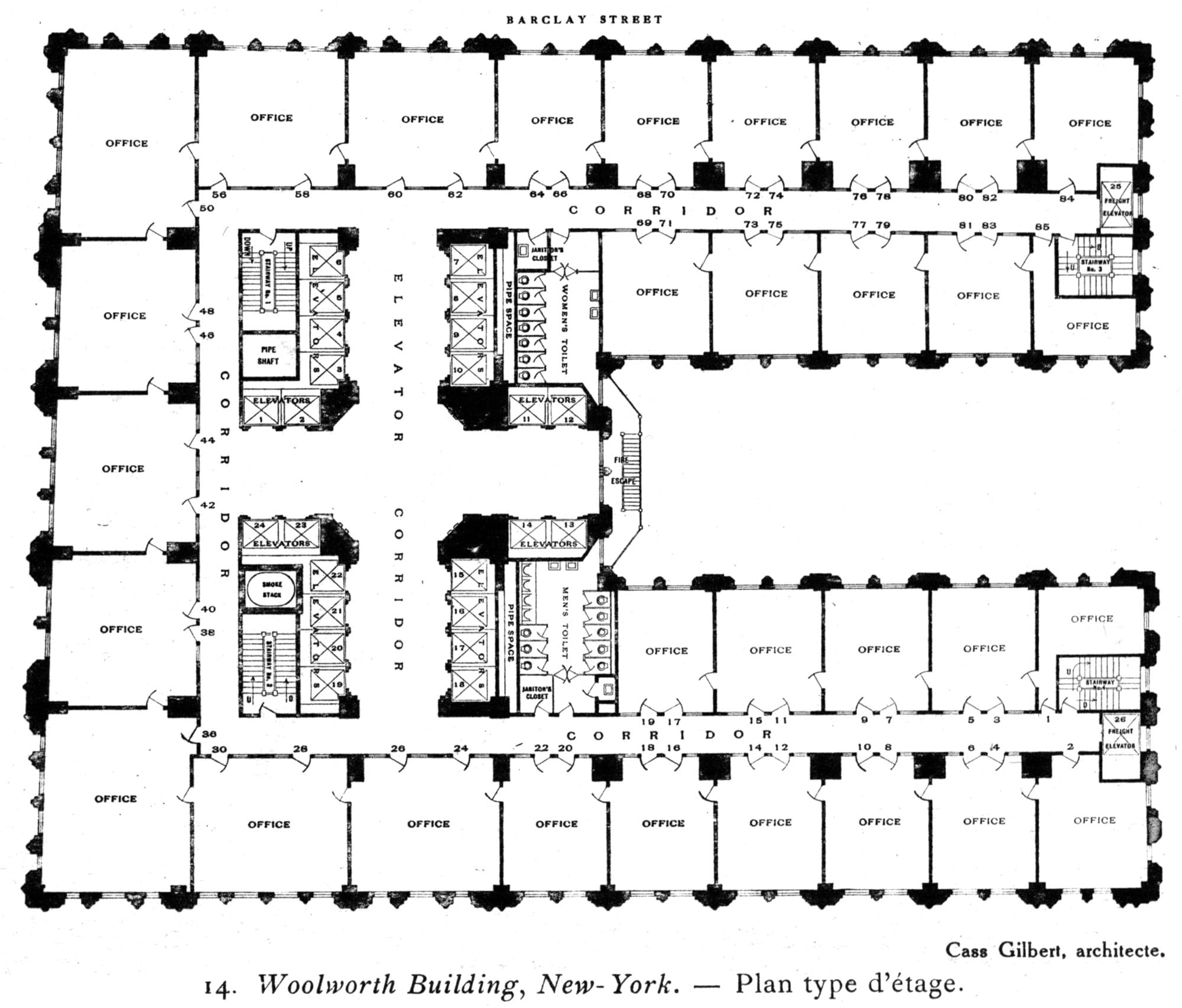 Above: With an overabundance of elevators, vacant shafts were able to be repurposed to serve the residential floors of the building ( image courtesy of Penn State Libraries Pictures Collection).

However, the narrow dimensions of these shafts and their location on the tower’s floor plate did not work efficiently with the proposed residential layout of the building.

To overcome this, a 4.9-metre-wide disused boiler flue which ran the entire height of the building was repurposed as the residential elevator shaft, allowing for larger cars and access from the basement car park to the highest floor.

Works to remove the 13mm thick steel flue were carried out by a worker being lowered into the duct and burning away pieces of steel from within, before lowering those pieces down through the shaft.

In order to accommodate the new, higher speed elevators for the residences, deeper elevator pits were required to allow for overruns in the shafts.

To construct these, 4.9-metre deep holes were excavated in the building’s basement, extending 2.4 metres below the waterline.

To avoid soil collapse and water quickly filling the pits during excavation, grout was first injected into the soil to stabilise it. Once complete the pit was waterproofed and lined with cement to prevent leaks.

With its conversion from commercial to residential use, a number of additional services were required on the upper floors of the Woolworth Building, independent from those for the office units. 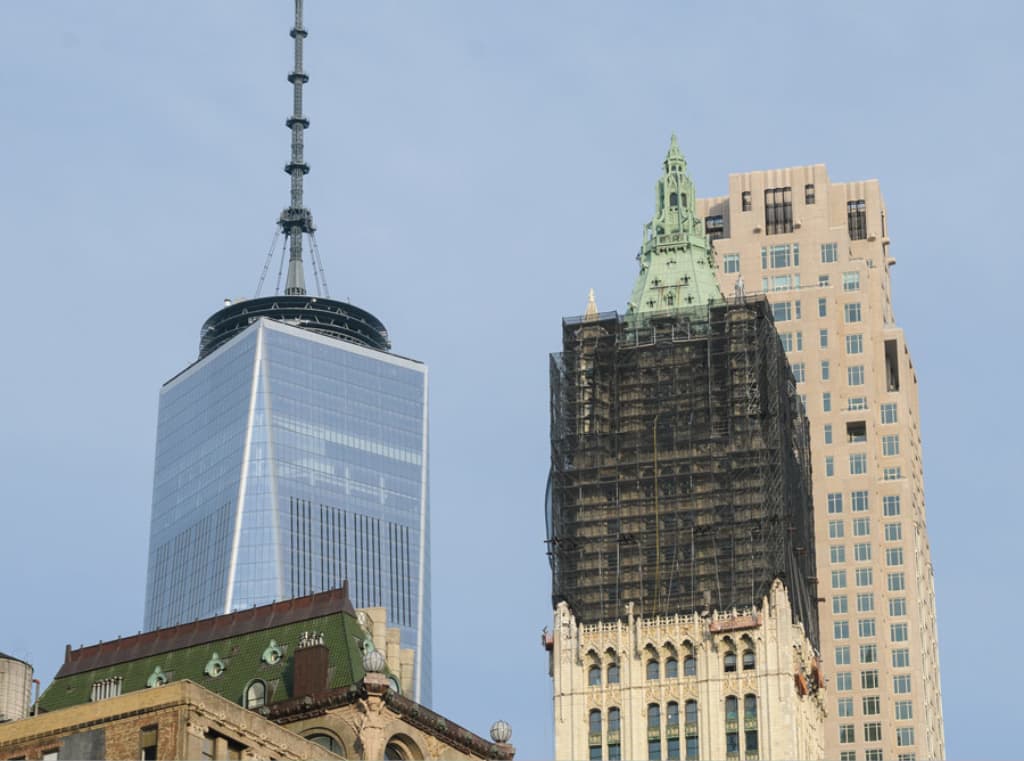 Above: Mechanical shafts were incorporated into the decorative tourelles of the building to accommodate services to the upper floors ( image courtesy of Ralph D'Angelo).

Making use of the disused elevator shafts, engineers were able to bring all services up from street level to the 29th floor, bypassing the commercial levels before branching off to each residence.

To provide sufficient air intake and exhaust for the tower, the four decorative tourelles that surround its summit were adapted to house mechanical shafts which could service the upper floors.

Crowning the Woolworth Residences is the aptly named Pinnacle Penthouse.

Spanning the five highest floors of the tower this “Castle in the Sky” is unlike any other New York apartment. 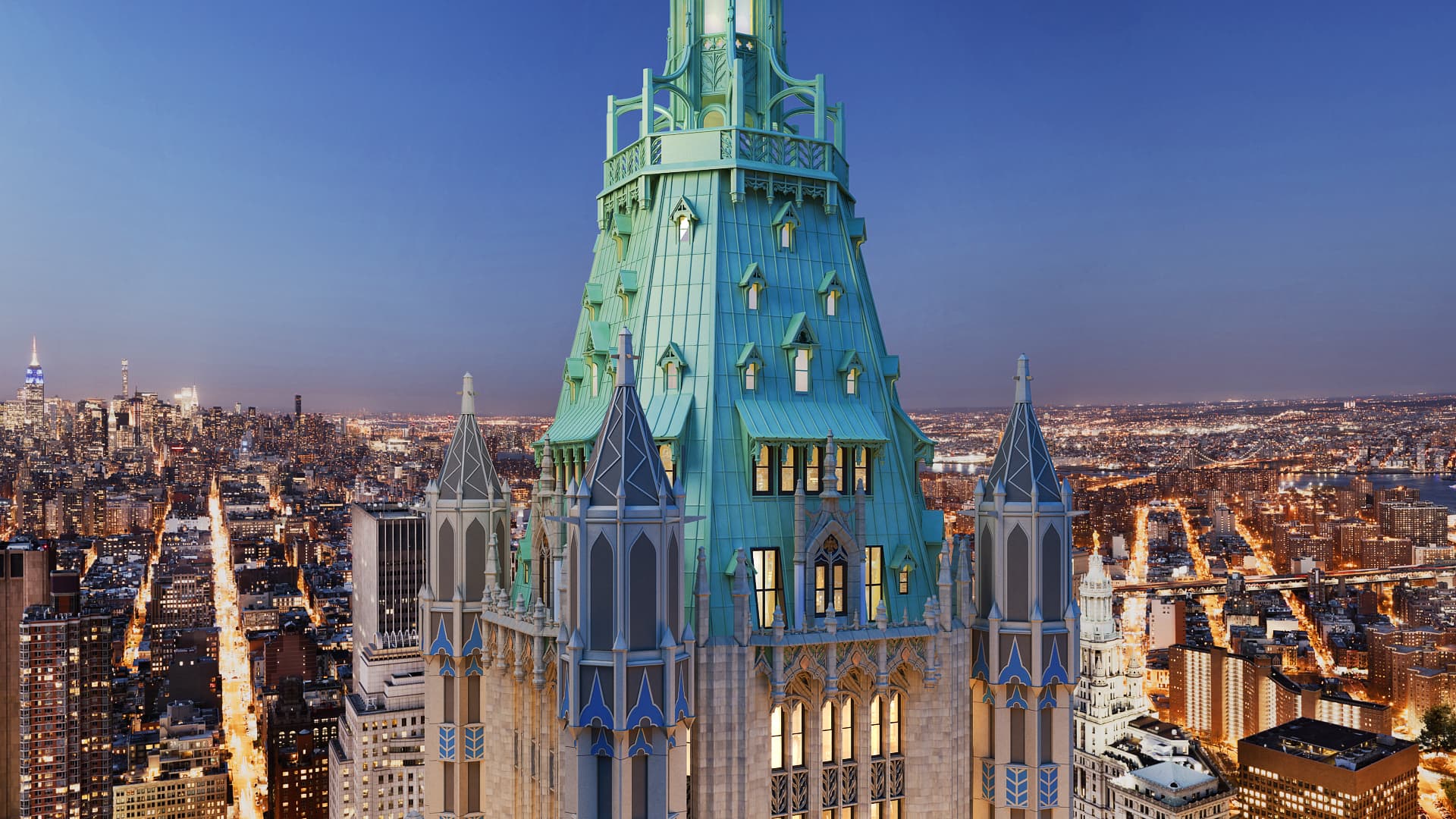 Above: The Pinnacle penthouse covers five floors and comes with a private observation deck (image courtesy of Alchemy Properties).

With three bedrooms, five bathrooms, a private elevator, library, media room and private observation deck across 9,710 square feet of space, the penthouse was marketed at USD $110 million, more than double the previous record for the most expensive downtown residence. 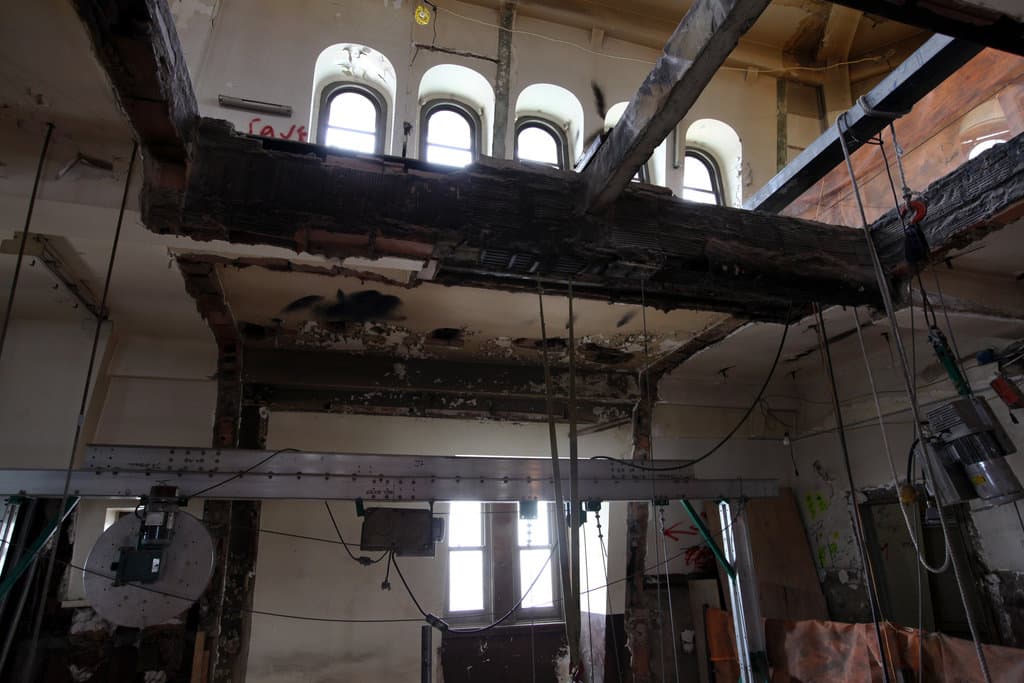 Above: Internal works to covert the building required the removal of half of the 54th floor to create a grand space for the penthouse ( image courtesy of Richard Perry).

These adaptations – along with the removal of half of the 54th floor to create a double height entertainment space known as “the Great Room” and additional floor penetrations to accommodate the private elevator – meant that the summit of the tower required extensive structural support to continue resisting lateral loads.

In response, engineers introduced bracing around all new openings while the entire 54th and 55th storeys were strengthened with additional bracing around their perimeter.

As our living habits, desires and building regulations continue to evolve, it is tempting to overcome challenging issues with outdated building stock simply by demolishing such structures.

But with growing respect for our built heritage and increasing awareness of adaptive reuse for large structures, the Woolworth Building stands as a prime example of how history can not only be retained but brought forward into a new age.