THE Hong Kong-Zhuhai-Macau bridge is the longest ocean crossing in the world.

In fact consisting of three cable-stayed bridges, three man-made islands and one of the world's longest undersea tunnels, the entire project has taken eight years to construct at a cost of over USD $15BN.

The 55-kilometre crossing connects Hong Kong with Macau and Zhuhai, drastically reducing journey times between the three cities and standing as a testament to the engineering might of the Chinese.

WHY BUILD AN OCEAN CROSSING?

China's Pearl River Delta is one of the most densely populated areas on our planet with some 68 million people living in the cities that surround the mouth of the river.

The rapid development of Hong Kong in the 1980s and 1990s led to numerous new road connections across the border into mainland China. 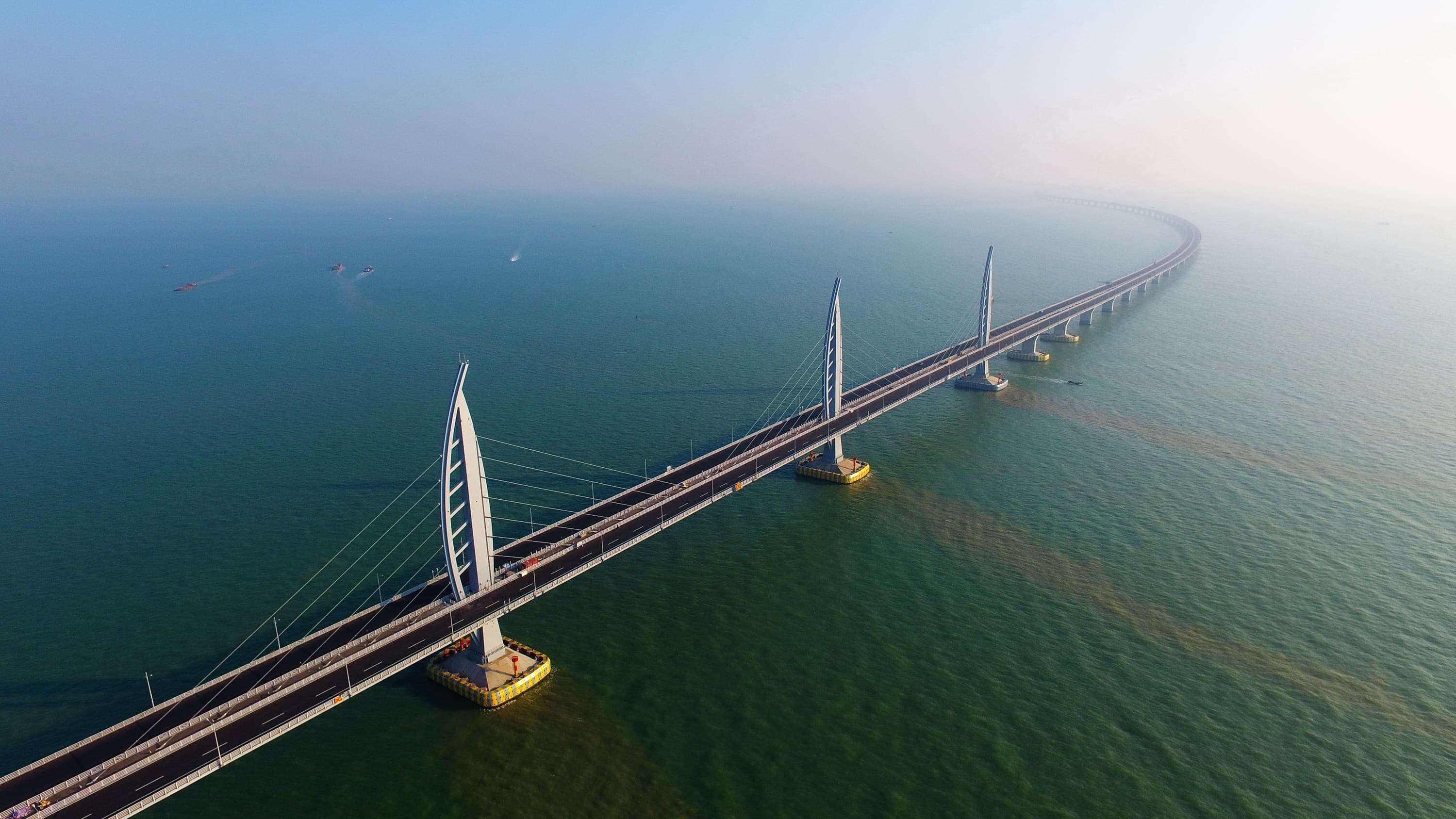 Above: The bridge was envisaged to better connect and unify the region after the colonies of Hong Kong and Macau were returned to China in the late 1990s (image courtesy fo Xinhua).

These road connections continued to be improved on the eastern side of the delta, however, connections to the west were lacking and the most direct land route involved a 160 kilometre, 4.5-hour car journey.

Following the return of the British and Portuguese colonies of Hong Kong and Macau to China in 1997 and 1999 respectively, Chinese and Hong Kong authorities explored the feasibility of linking the two sides of the river delta to drive economic growth and improve unity.

With clear economic advantages, the chance to increase employment opportunities, reduce congestion at border checkpoints and cut carbon emissions - the project was approved. 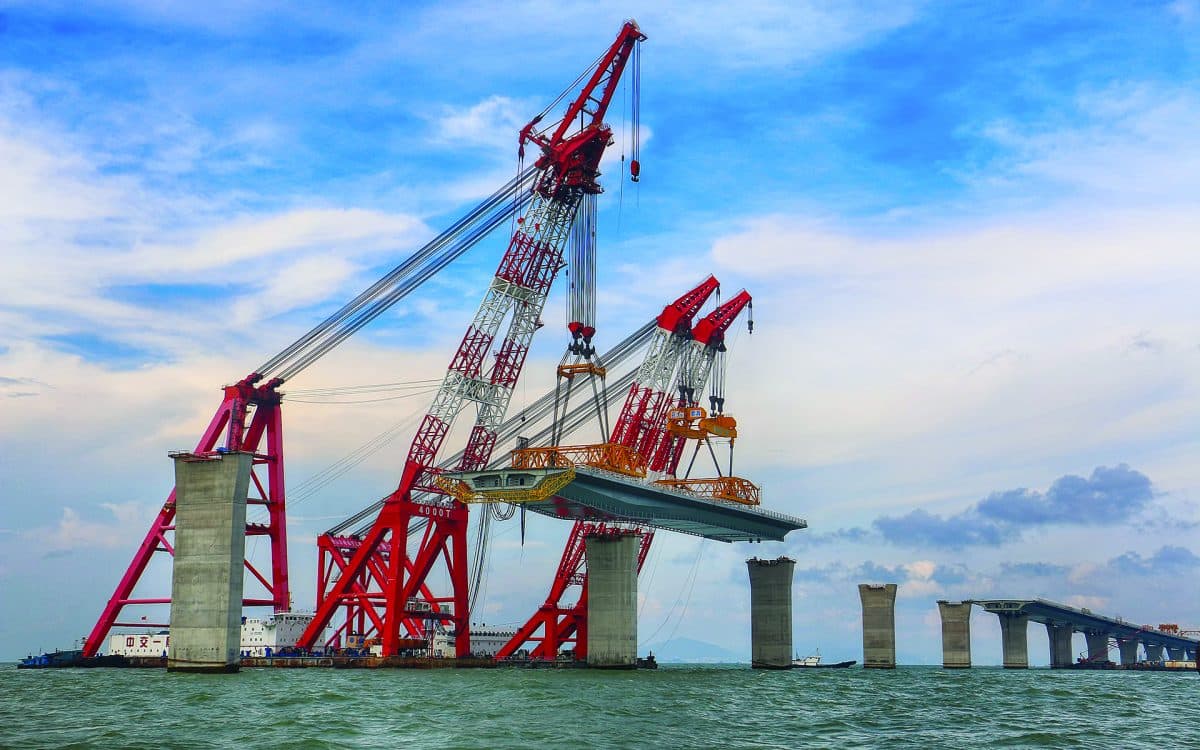 Construction began on the 29.6-kilometre Chinese section of the crossing in 2009.

This element carries the roadway across 22.9 kilometres of elevated roadway and three cable-stayed bridges before meeting a man-made island and ducking beneath the waves into a 6.7-kilometre undersea tunnel.

With an estimated 4,000 ships crossing the Pearl River Delta every day, this bridge-tunnel system allows large ships to pass without the need to navigate around or under bridges.

A similar style of crossing connects Copenhagen in Denmark to Malmo Sweden across the Oresund Strait.

The roadway re-emerges from its undersea tunnel onto another man-made island on the Hong Kong side of the crossing, close to the city’s airport.

This section of the crossing commenced construction in 2011 and links to Hong Kong itself via a 12-kilometre elevated roadway. 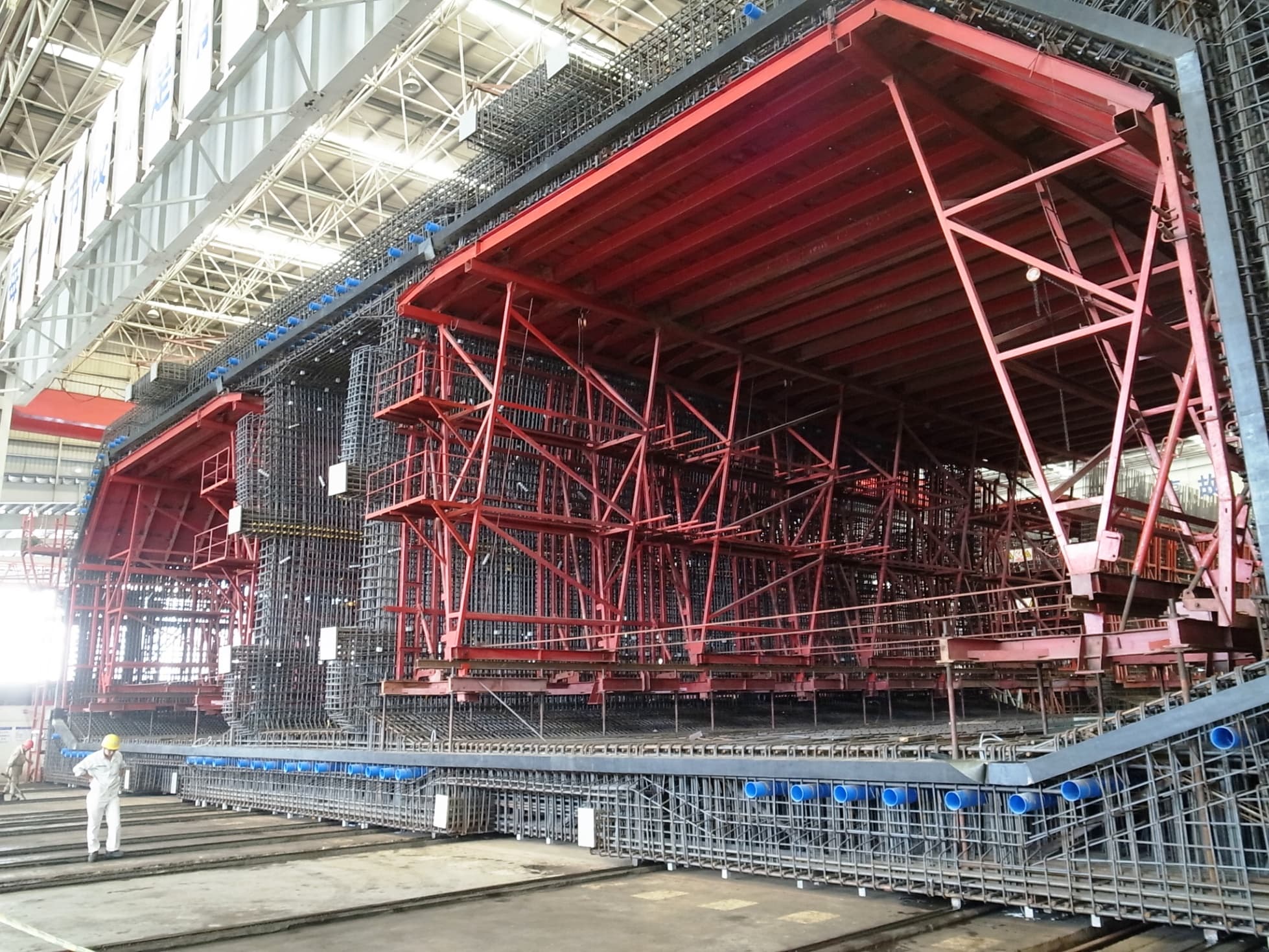 Above: Steel reinforcement for the tunnel section of the project (image courtesy of Tim Leung).

With an original completion date of 2016, the scheme was delayed when environmental concerns over the bridge’s impact on local dolphin populations were raised, pushing completion back to 2017.

Due to Hong Kong and Macau’s special administrative status from mainland China, checkpoints were required to facilitate customs and the passage of people around the region.

These checkpoints are located at either end of the bridge and serve as a means of re-setting the traffic direction as vehicles change over to the left-hand side when entering Hong Kong and Macau from mainland China. 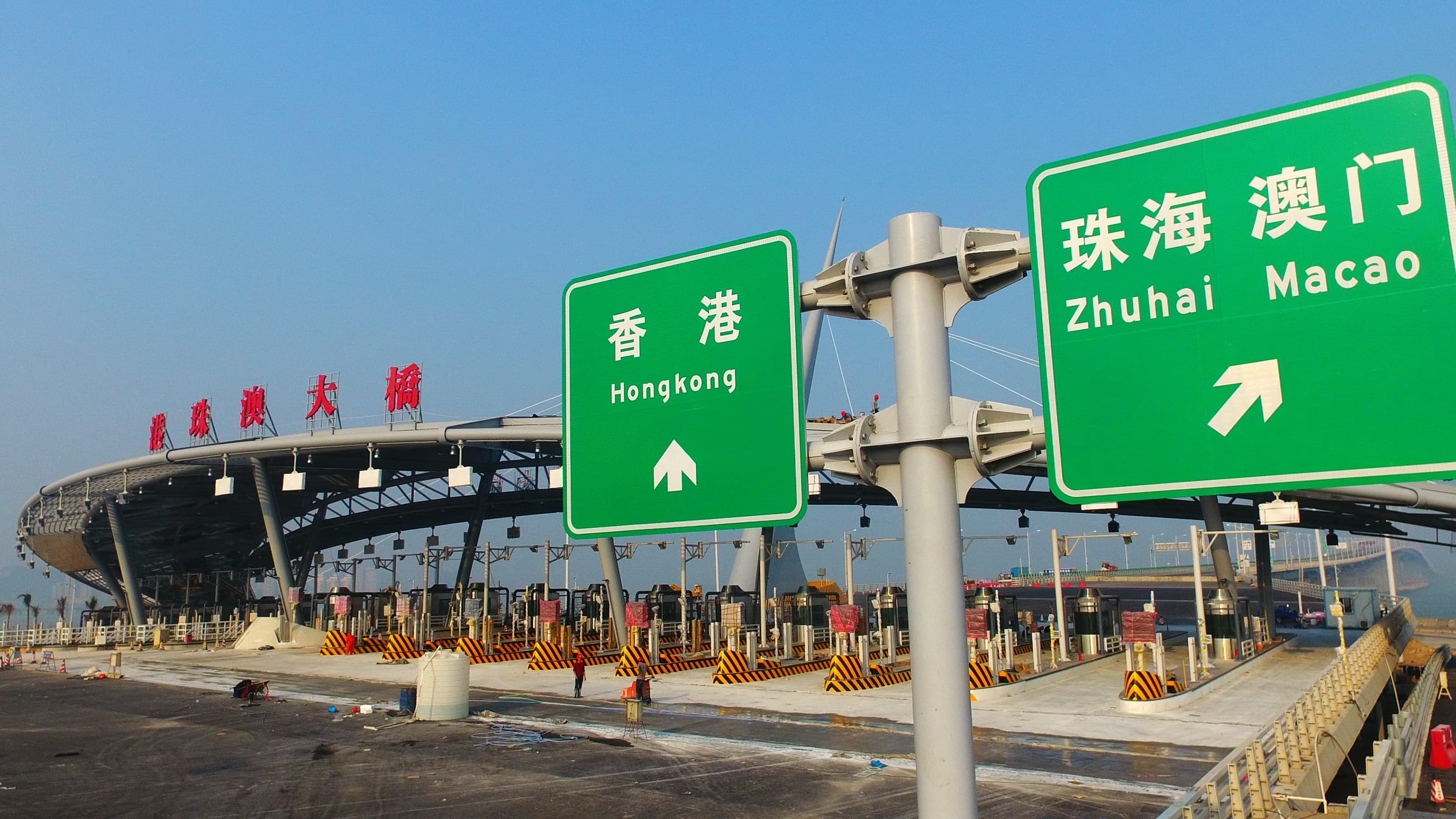 Above: Checkpoints must be crossed when travelling between Hong Kong and Macau (image courtesy of Macau News).

While the project has been hailed by many as an engineering achievement, it has not been without controversy, with some questioning its lengthy delays, cost overruns and worker safety during construction.

Furthermore, in 2017, Hong Kong officials arrested a number of lab technicians after concrete strength test results were shown to have been falsified.

Following these arrests, Hong Kong's Highways Department conducted their own tests on the concrete and the structure was in fact deemed safe with engineers stating that the bridge had been designed to withstand a magnitude eight earthquake, a super typhoon or a collision with a 300,000-tonne cargo vessel. 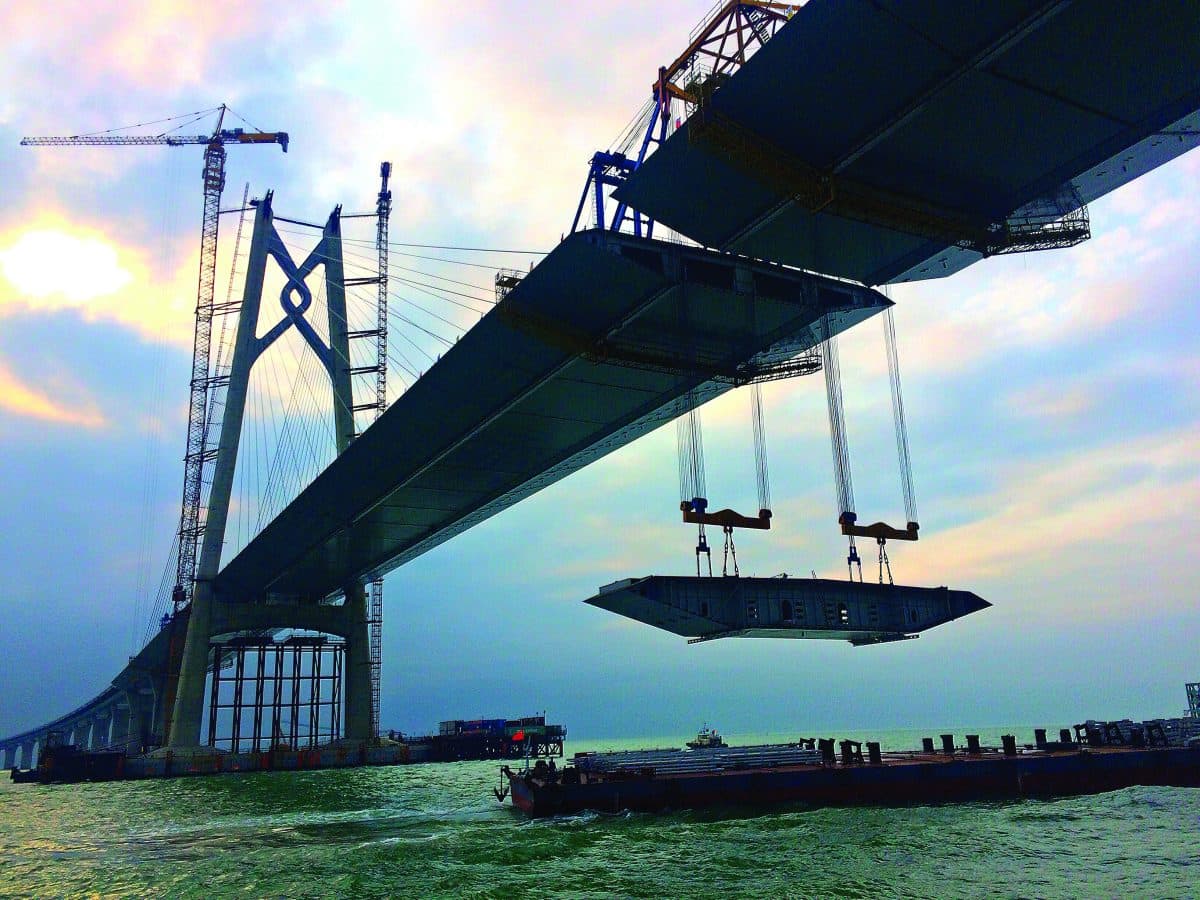 Above: The bridge was found to meet safety standards despite concrete tests being falsified (image courtesy of Hong Kong-Zhuhai-Macao Bridge Authority).

Now completed and despite its setbacks, this 55-kilometre ocean crossing is the centrepiece of the Pearl River Delta - a remarkable infrastructure project that better connects one of the world’s most populated regions and opens economic opportunities for southern China.