IN response to rising construction demand and a severe shortage of skilled labour in the workforce, developers and contractors around the world are now revisiting the concept of off-site construction, integrating new technologies and manufacturing approaches and embracing it on a scale not seen before.

Emerging as a frontrunner in the hospitality market, hotel giant Marriott is now finalising plans to construct its latest hotel in New York using factory-built modules in just 90 days. 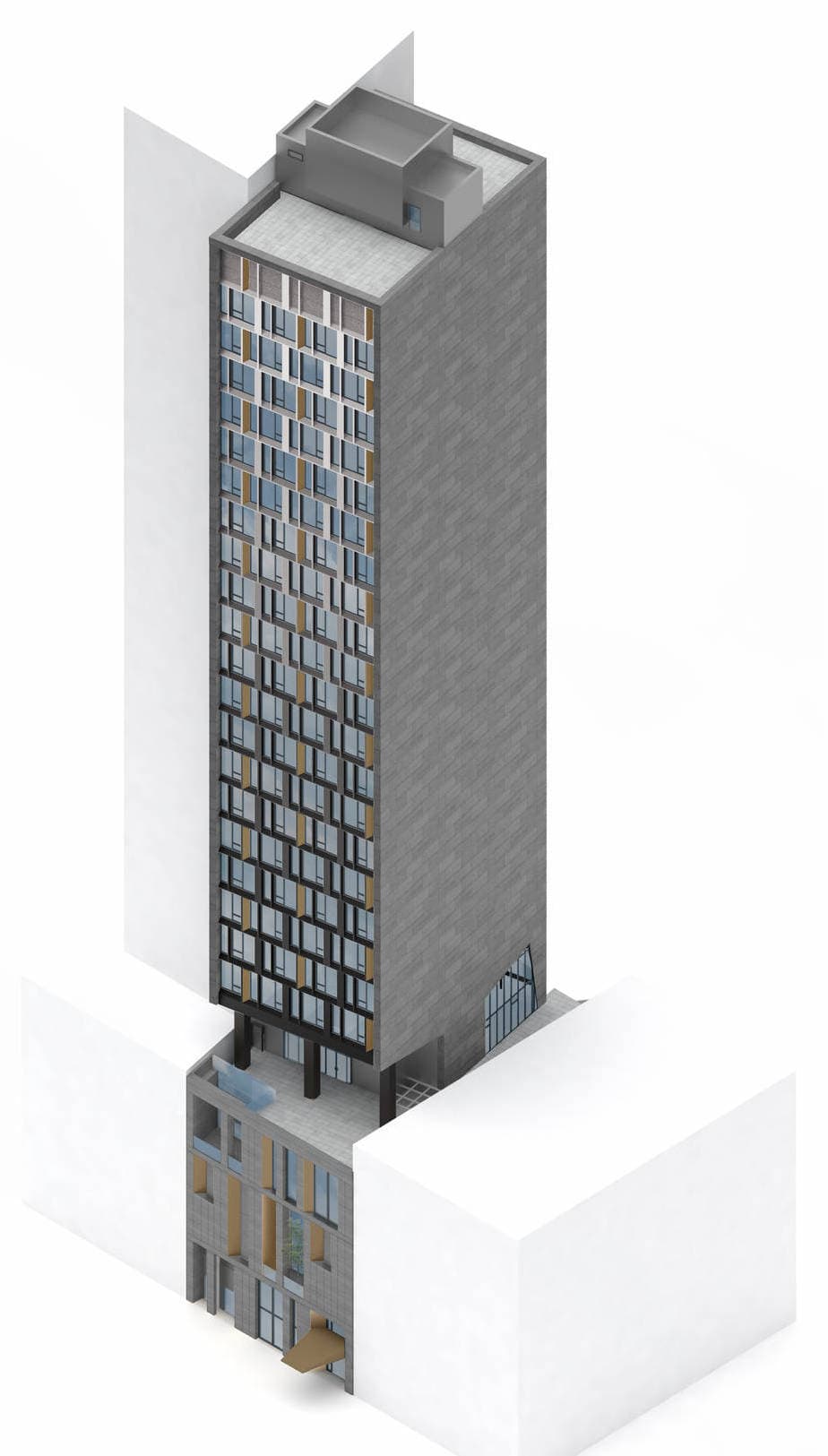 Set to stand 26 storeys high, Marriott’s new AC NoMad Hotel will be the tallest prefabricated structure of its kind anywhere the world.

Designed by Danny Forster + Architecture, the hotel uses symmetry to make efficient use of its small Manhattan site, while offsetting the tower to the street in order to create a more dynamic and visually appealing form. 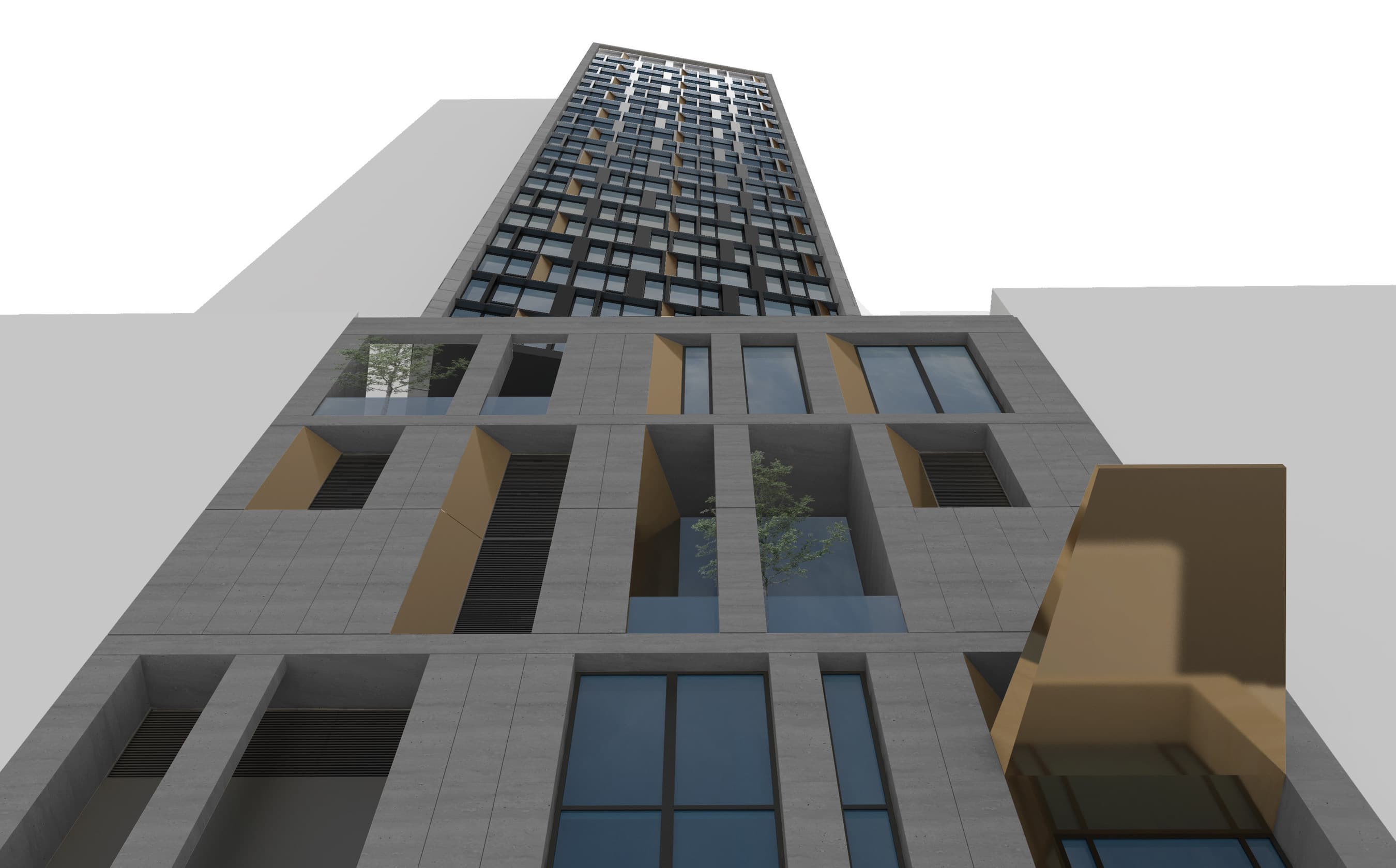 Above: The hotel's facade will be offset to the street to provide a more visually pleasing form (image courtesy of Danny Forster + Architecture).

With high construction demand and a severe shortage of skilled labour in the United States (US) construction sector, Marriott has seen the average build time for its new US hotels rise by 50% since 2011; a factor which significantly impacts revenue when capitalising on new and growing markets.

While comparable structures would typically cost in excess of USD $100 million when built with traditional construction methods, the AC NoMad will cost just USD $70 million to construct, even with the costs of factory manufacture and transportation accounted for.

Additionally, by making use of factory-produced modules, site-specific tasks such as excavation and foundation works can be undertaken concurrently while the structure’s modules are fabricated away from site. 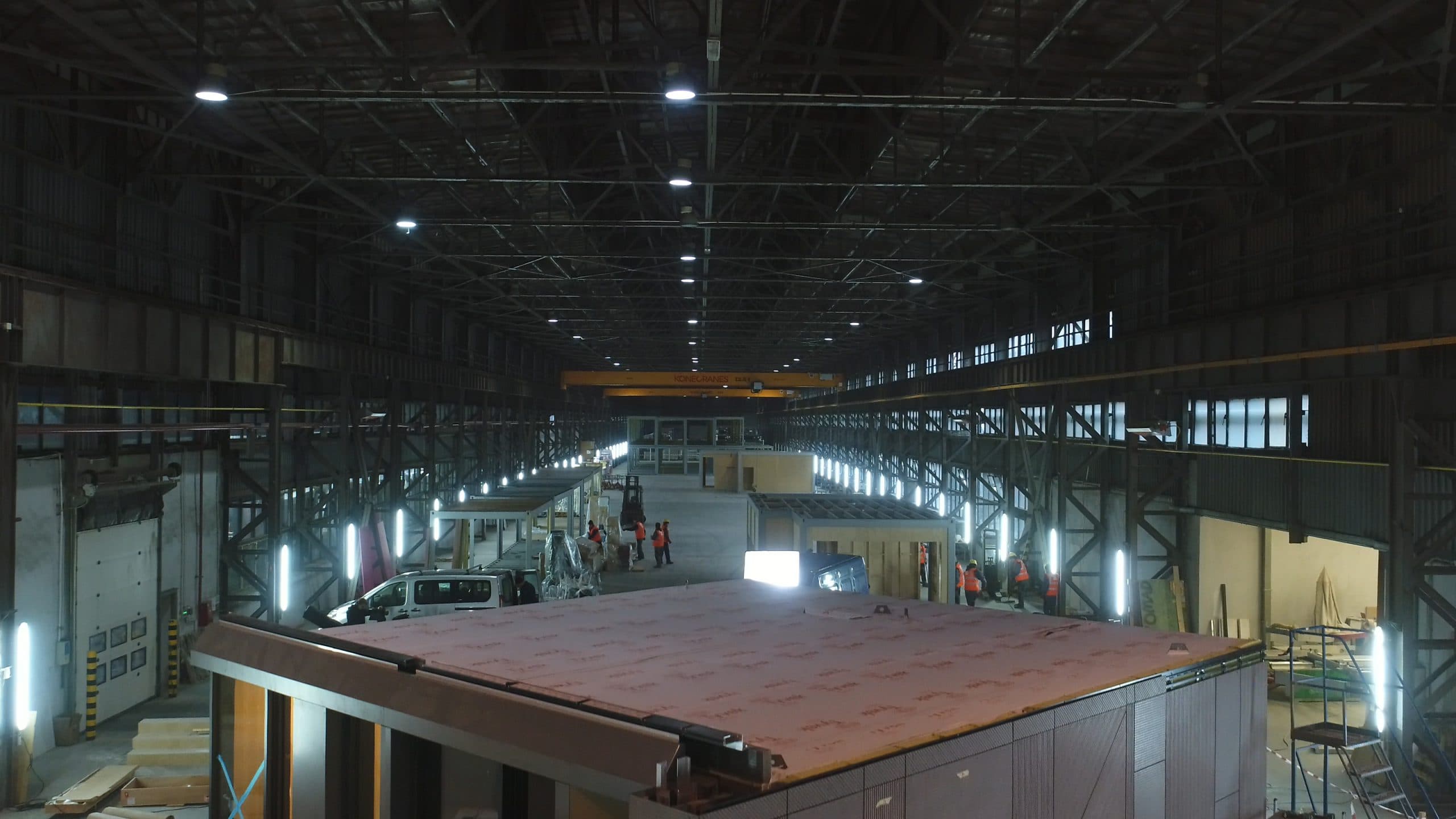 Above: Inside the factory in Poland (image courtesy of DMDModular).

Despite a slightly longer pre-construction design and planning phase, this approach can reduce the on-site build time for a project of this scale by up to six months, while reducing the amount of on-site labour required by nearly 70%.

The AC NoMad’s lobby and lower amenity floors will be constructed on-site using traditional construction methods, however, the hotel rooms themselves will be assembled in Poland before being shipped to the US, ready to install on-site.

Due to their size, the delivery of these modules must be carried out at night when New York’s streets are able to accommodate the oversized loads.

Arriving fully furnished – complete with bedding and toiletries – the modules will be simply lifted from their trucks and positioned on the tower.

With just eight modules required to form a floor, the structure will be able to rise significantly faster than a comparable building constructed with traditional methods. 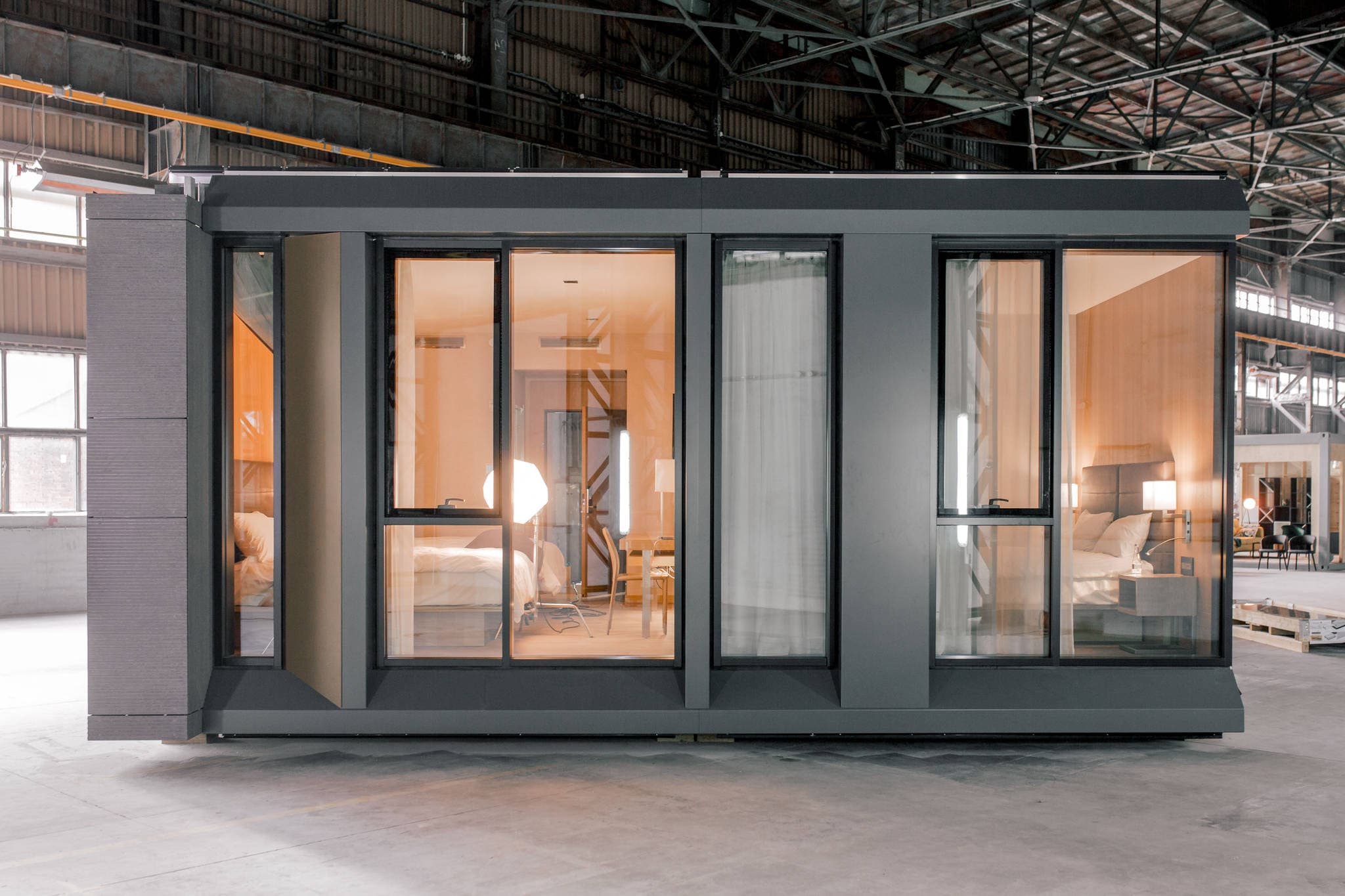 Above: One of the completed modules ready to be shipped (image courtesy of DMDModular).

While speed and cost were the primary drivers behind Marriott’s use of off-site construction techniques, the approach, in fact, provides a range of benefits.

Constructing the tower’s modules under controlled conditions allows quality to be greatly improved.

This means that – regardless of the weather, changing site environment or the location of each module within the building – every room will be delivered to a consistently high standard.

While the operation of a factory and transportation must all be considered, pre-fabricated approaches can significantly reduce waste in the construction process, limiting the overall environmental impact of new developments. 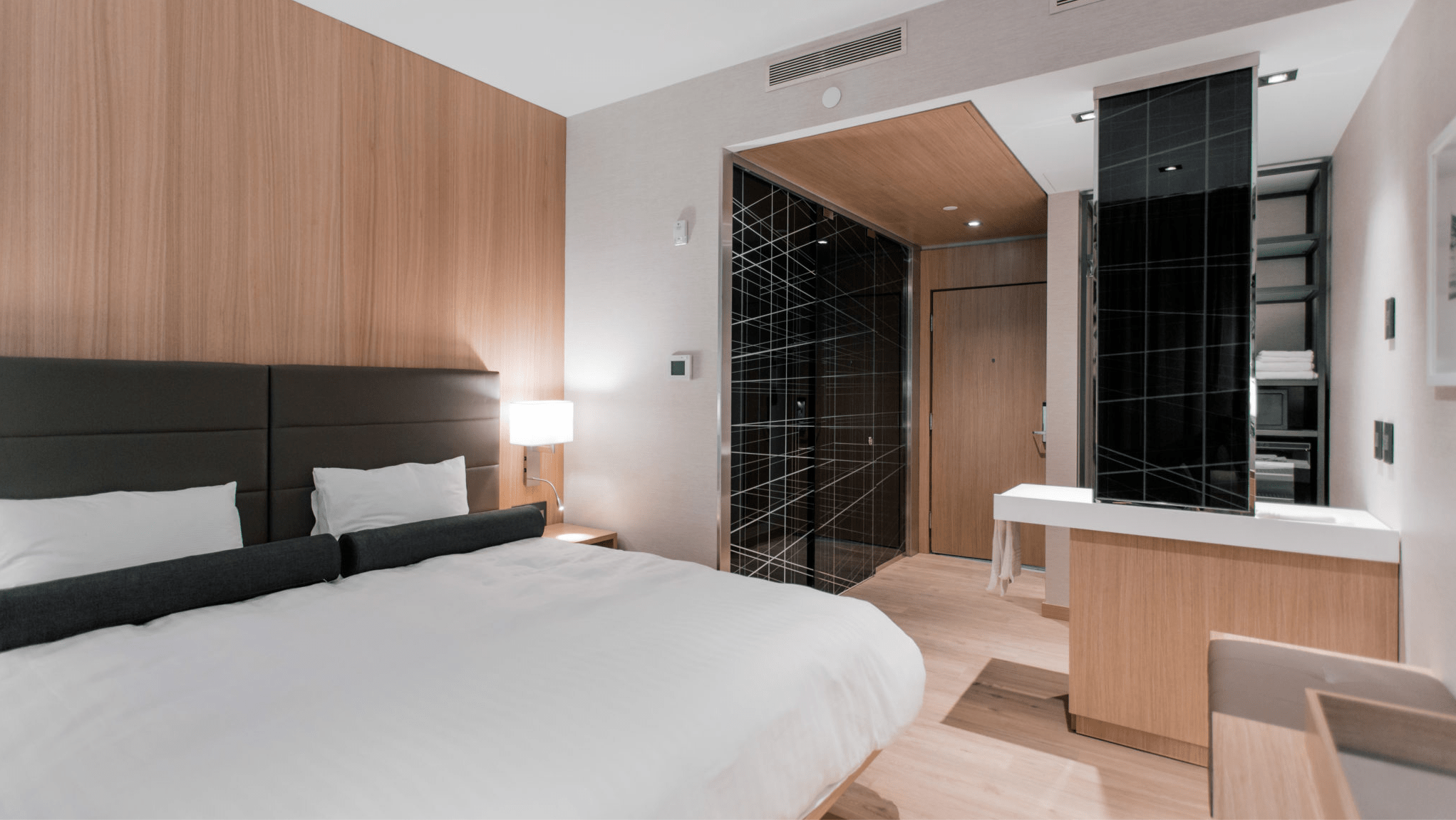 Above: The completed modules will arrive with furniture and bedding (image courtesy of DMDModular).

In traditional hotel construction, neighbouring rooms often share a single wall. However, factory-built modules typically call for an insulated gap between each unit resulting in quieter rooms and more enjoyable experience for guests.

Using the AC NoMad – the world’s tallest modular hotel to date – as a starting point, Marriott is planning to construct 25% of their new hotels using prefabricated methods over the next five years.