HISTORICALLY occupied by premium office space, the lofty heights of some the world's tallest new skyscrapers are now mostly taken up with multi-million dollar apartments.

But while most of us will never see the inside of these mansions in the sky, there is a way to get a small taste of the high life - we've rounded-up some of the highest hotels in the world.

WHAT MAKES A "HIGH HOTEL"?

It's important to explain how we have compiled this list. As all of the world’s highest hotels are in mixed-use skyscrapers, we have used the “highest occupied hotel rooms” to develop our ranking.

This means that despite containing a hotel, the 163 storey Burj Khalifa in Dubai won’t be appearing, as its Armani Hotel only occupies the tower up to the 39th floor. 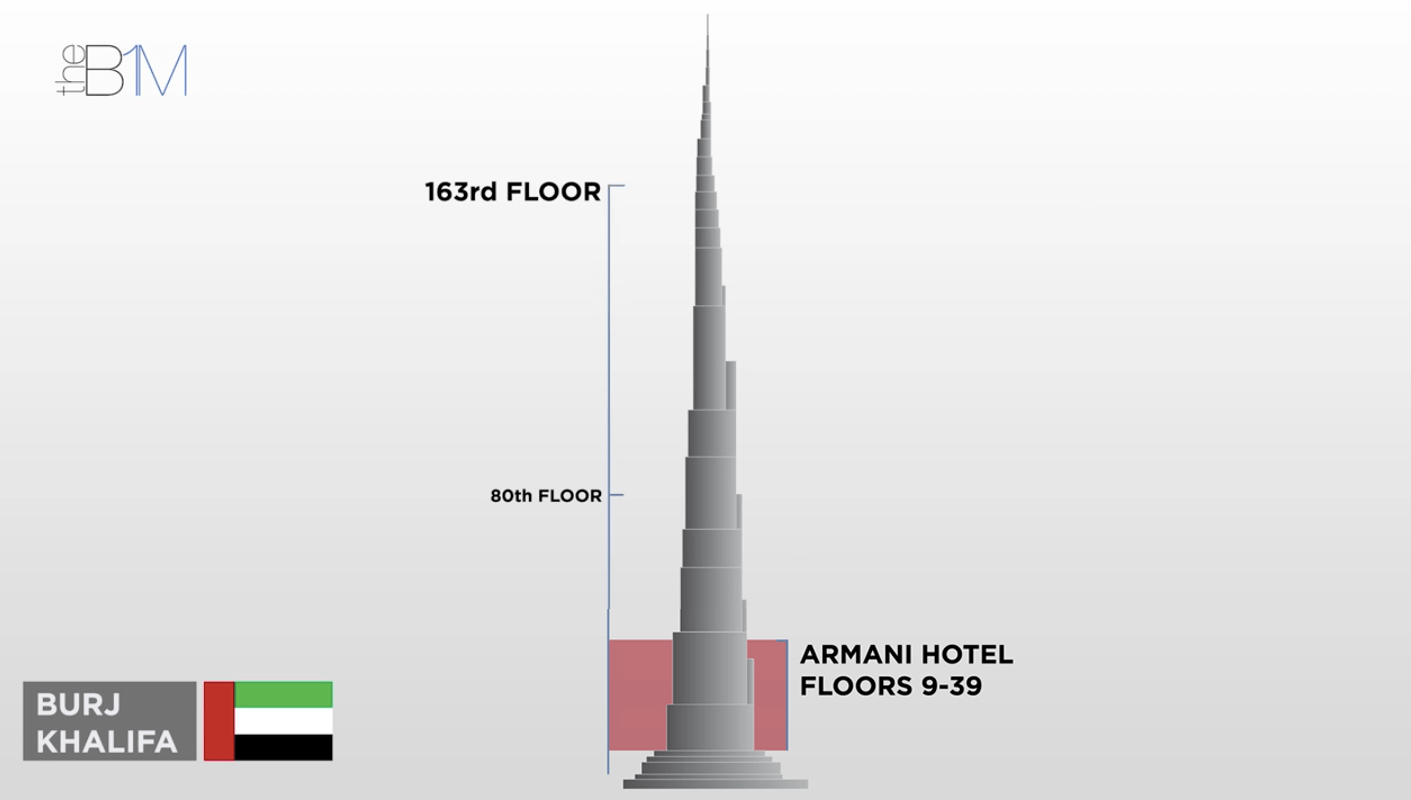 Above: The Burj Khalifa contains a hotel, however, with it's highest rooms on level 39 it doesn't make our list.

We kick-off with the Four Seasons in Guangzhou’s International Finance Centre.

This impressive avant-garde hotel, designed by Hirsch Bedner Associates, occupies the top third of Guangzhou's second tallest skyscraper. Opening in 2012, the hotel features 302 guest rooms and 42 deluxe suites across 30 of the tower’s floors. 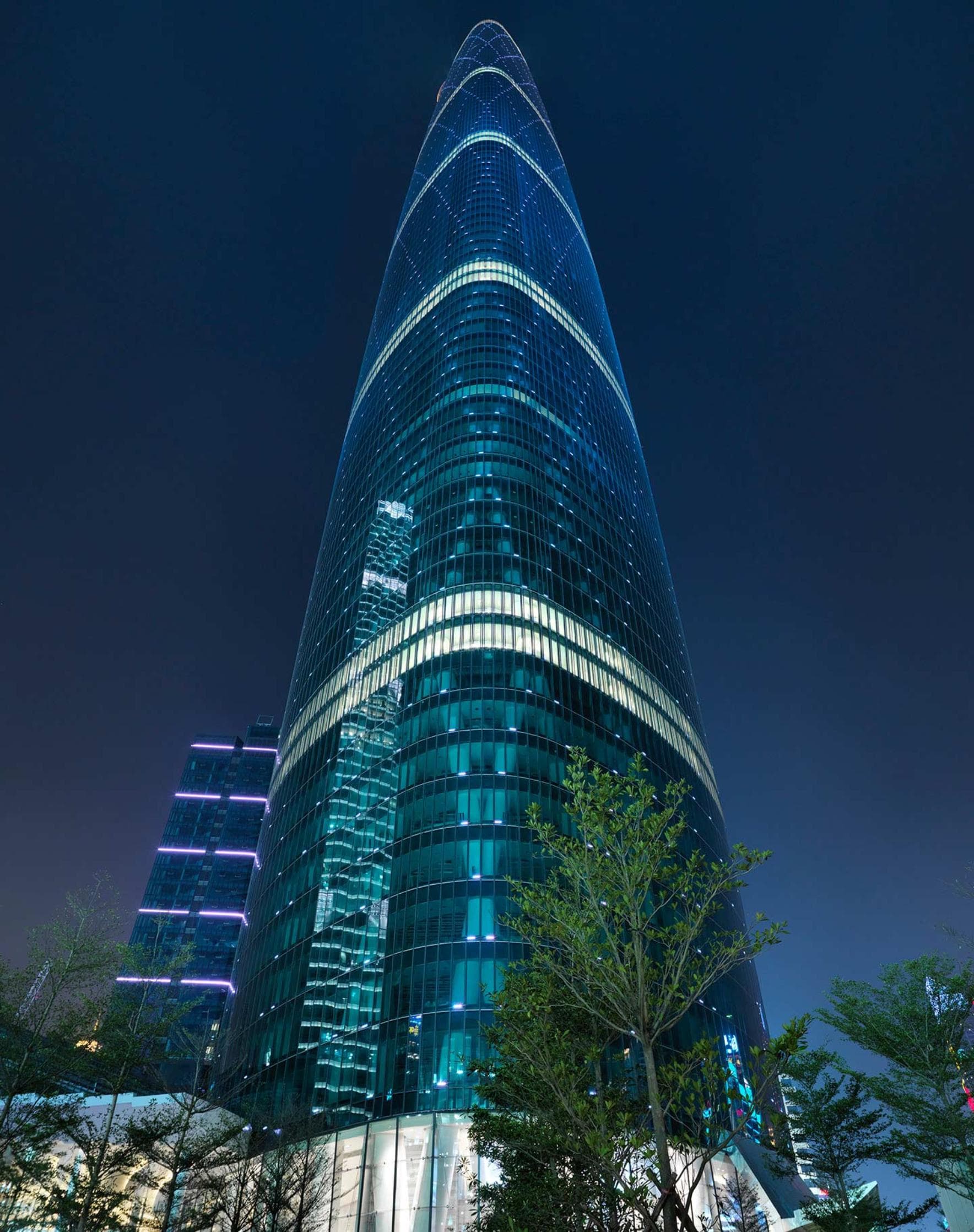 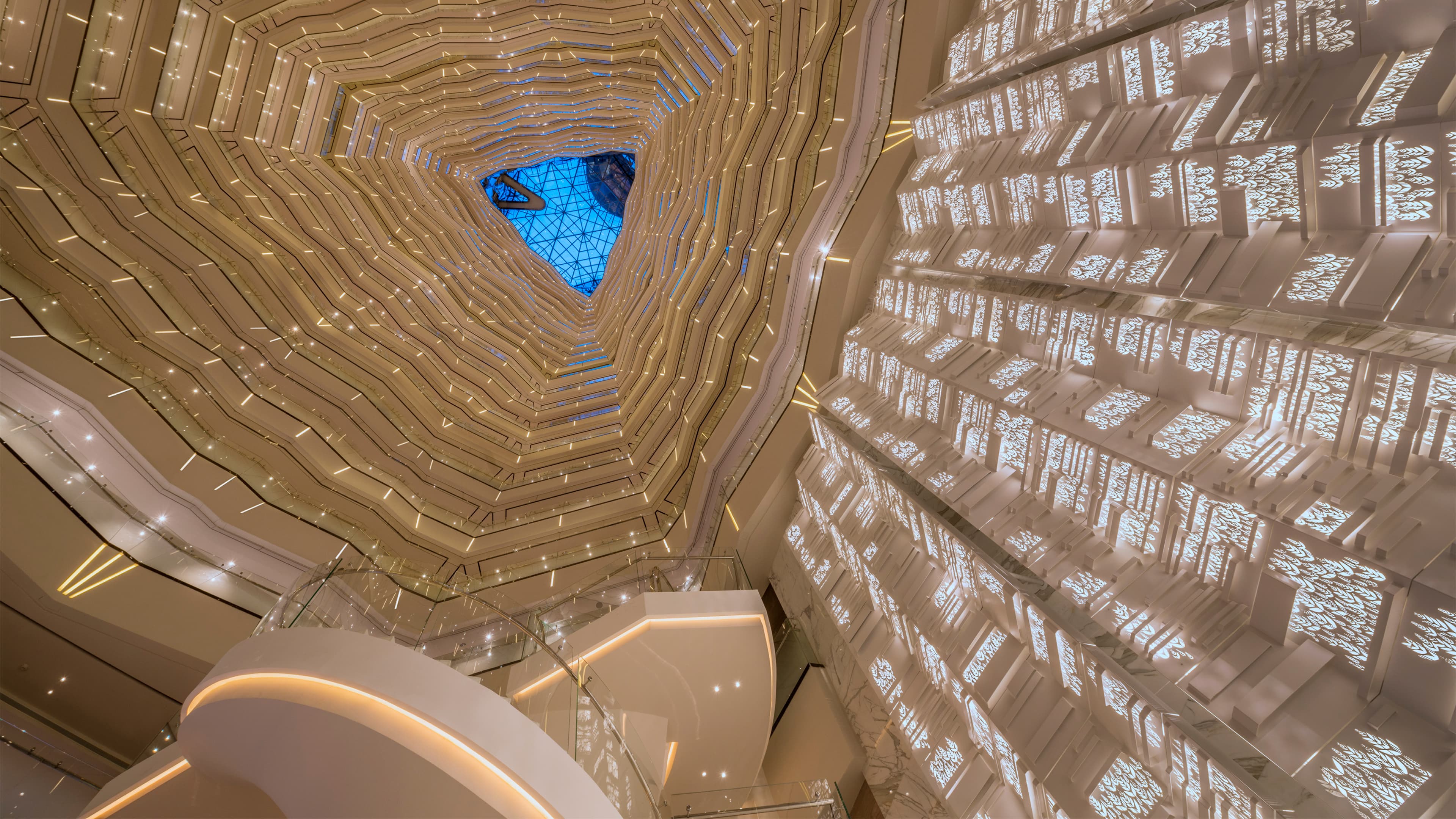 With its entrance lobby on the 70th floor, guests are greeted by a 34-storey sky-lit atrium on arrival.

Despite its seven restaurants, day spa, cloud-level pool, 18 function rooms and 700-capacity ballroom, the main attraction for the hotel’s guests are the breath-taking views it offers across the city.

Staying in China, the St Regis Hotel in Shenzhen comes in fourth on our list.

With rooms, as high as the 94th floor, the hotel also offers a business centre as well as an indoor pool and a gym on the 75th floor; offering guests panoramic views across the city and as far away as Hong Kong. 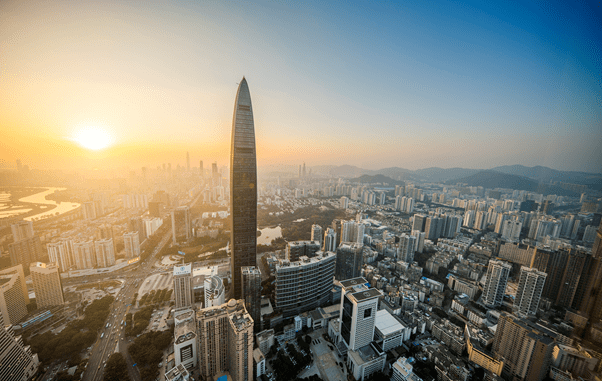 Above: The KK100 tower in Shenzhen houses the St. Regis on its upper floors.

Next up is not only the most recent addition to this list, but the only hotel on our countdown to be located outside of China.

Operated by Lotte Hotels and Resorts, the Signiel is a "6-star hotel" situated in South Korea's tallest skyscraper - the Lotte World Tower.

Billed by its operators as the “first luxury landmark hotel representing Korea” the Signiel occupies floors 87 to 101 and boasts the largest hotel rooms in Seoul. 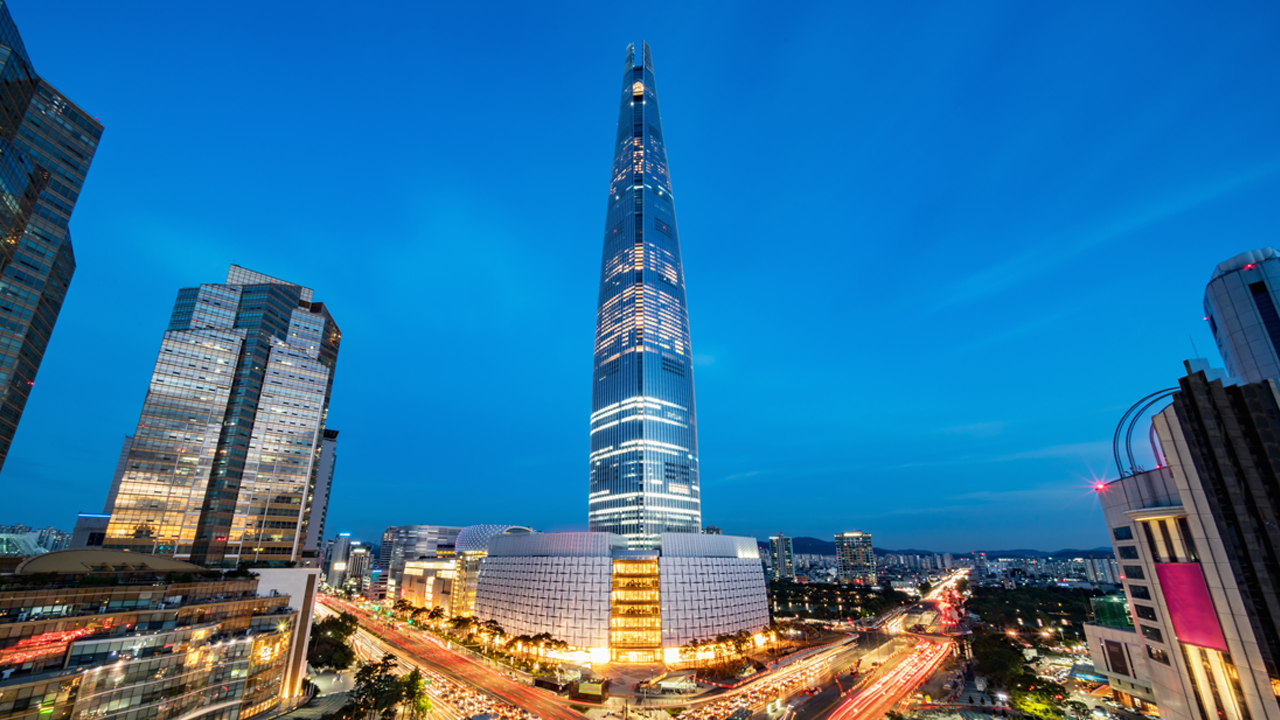 Above: The Signiel, in Seoul, is the only hotel outside of China on our list. Below: The interiors of the hotel were designed to reflect an "East-meets-West" style (image courtesy of Wilson Associates) 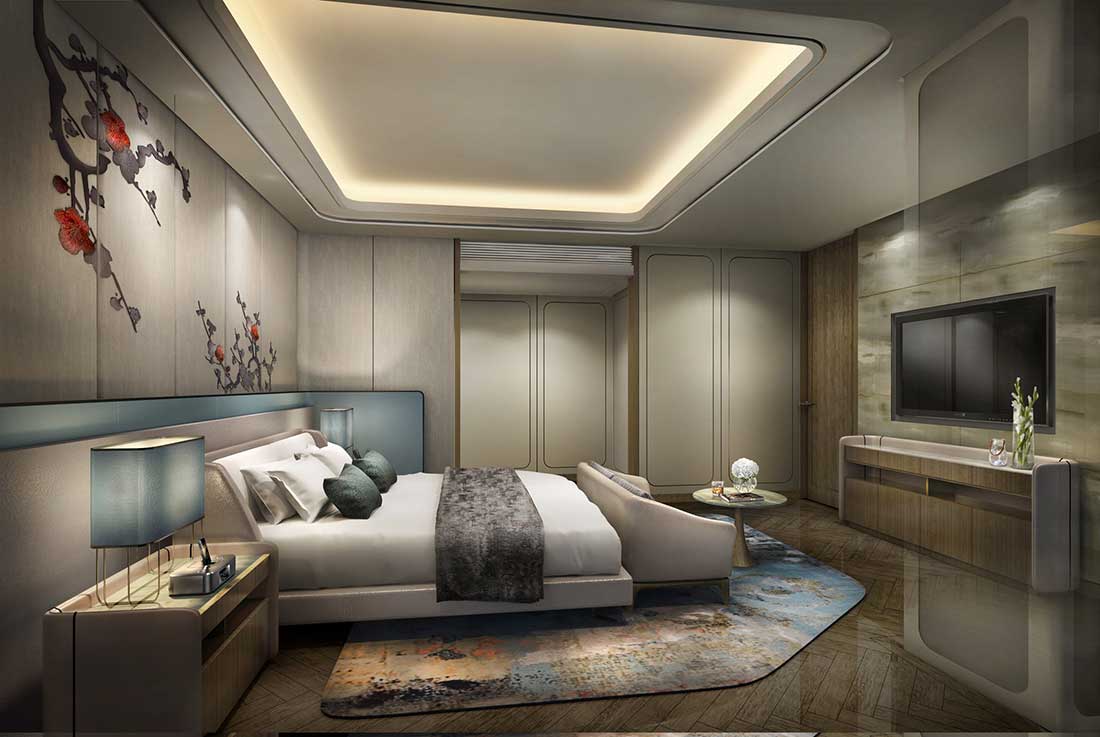 Returning to China, we have the former title holder of World's Tallest Hotel, the Park Hyatt in Shanghai's World Finance Centre.

Occupying floors 79 to 93 of the 101-storey tower, the Park Hyatt offers 174 guest rooms and 14 suites - some of which sit as high as 88 storeys above Shanghai. 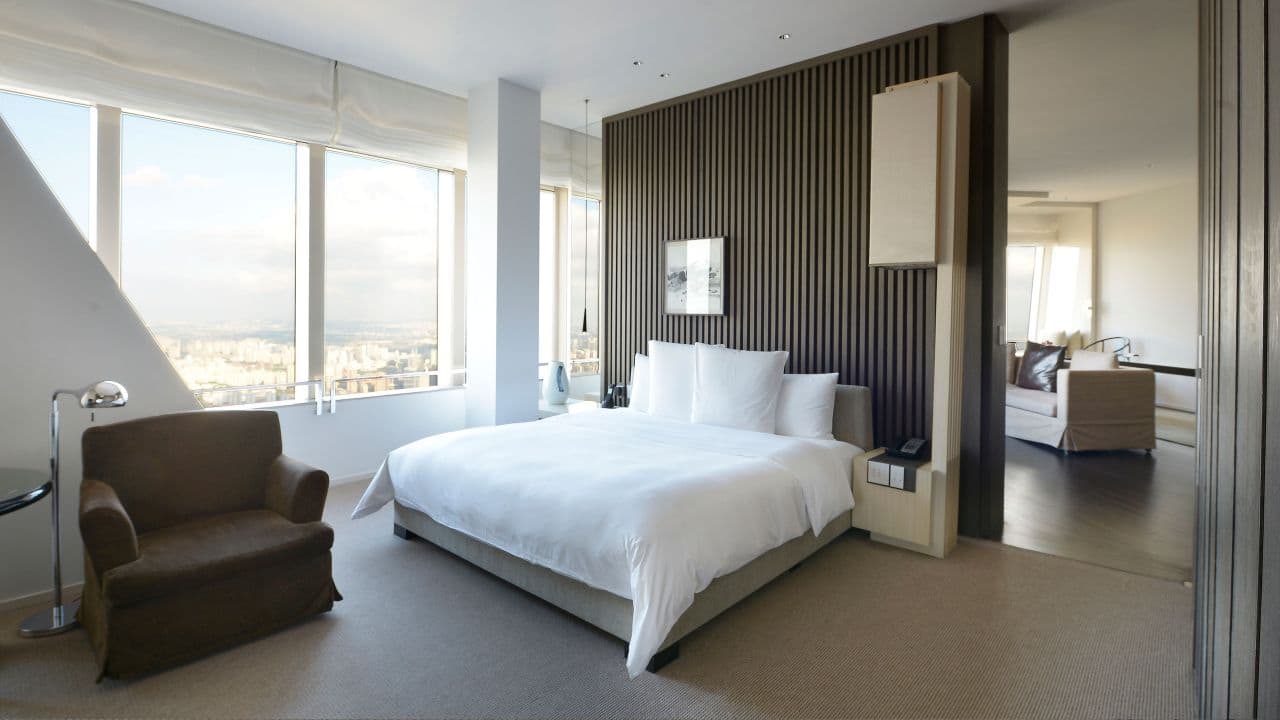 Opened in 2008, the 5-Star hotel offers some of the city’s largest rooms alongside nine bars and restaurants, and numerous amenities.

There’s also a Tai Chi courtyard and a luxurious swimming pool on the 85th floor.

Quite literally taking our top spot is the highest hotel anywhere in the world: The Ritz-Carlton at the International Commerce Centre in Hong Kong.

Situated at the top of the tower between levels 102 and 118, the Ritz-Carlton overlooks Victoria Harbour and offers 312 rooms complete with dedicated butlers and a limousine service. 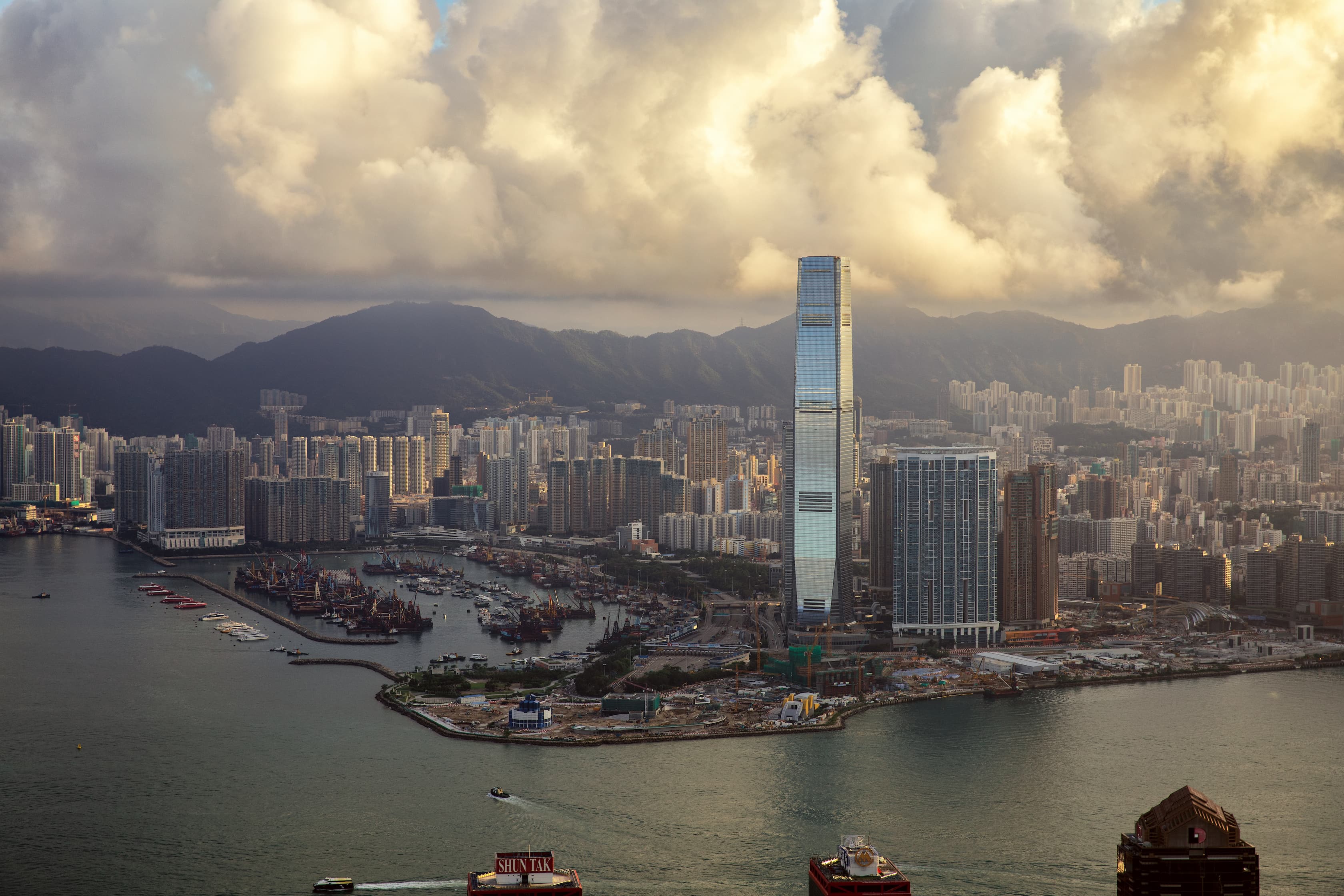 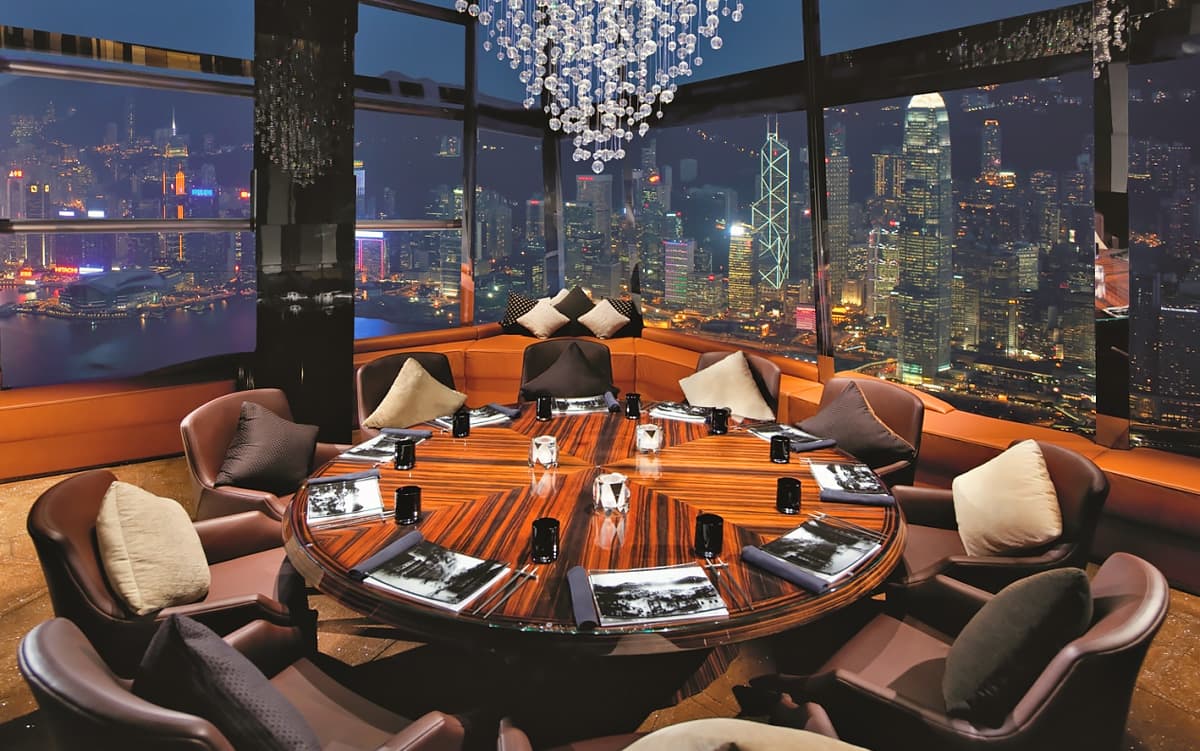 With its spa located on level 116, guests truly have their head in the clouds as they relax and take in the views from the infinity pool, 486 metres (1,595 feet) above Hong Kong.

With a range of restaurants on offer as well as the world's highest bar on level 118, the Ritz-Carlton represents the pinnacle of the hotel high life. 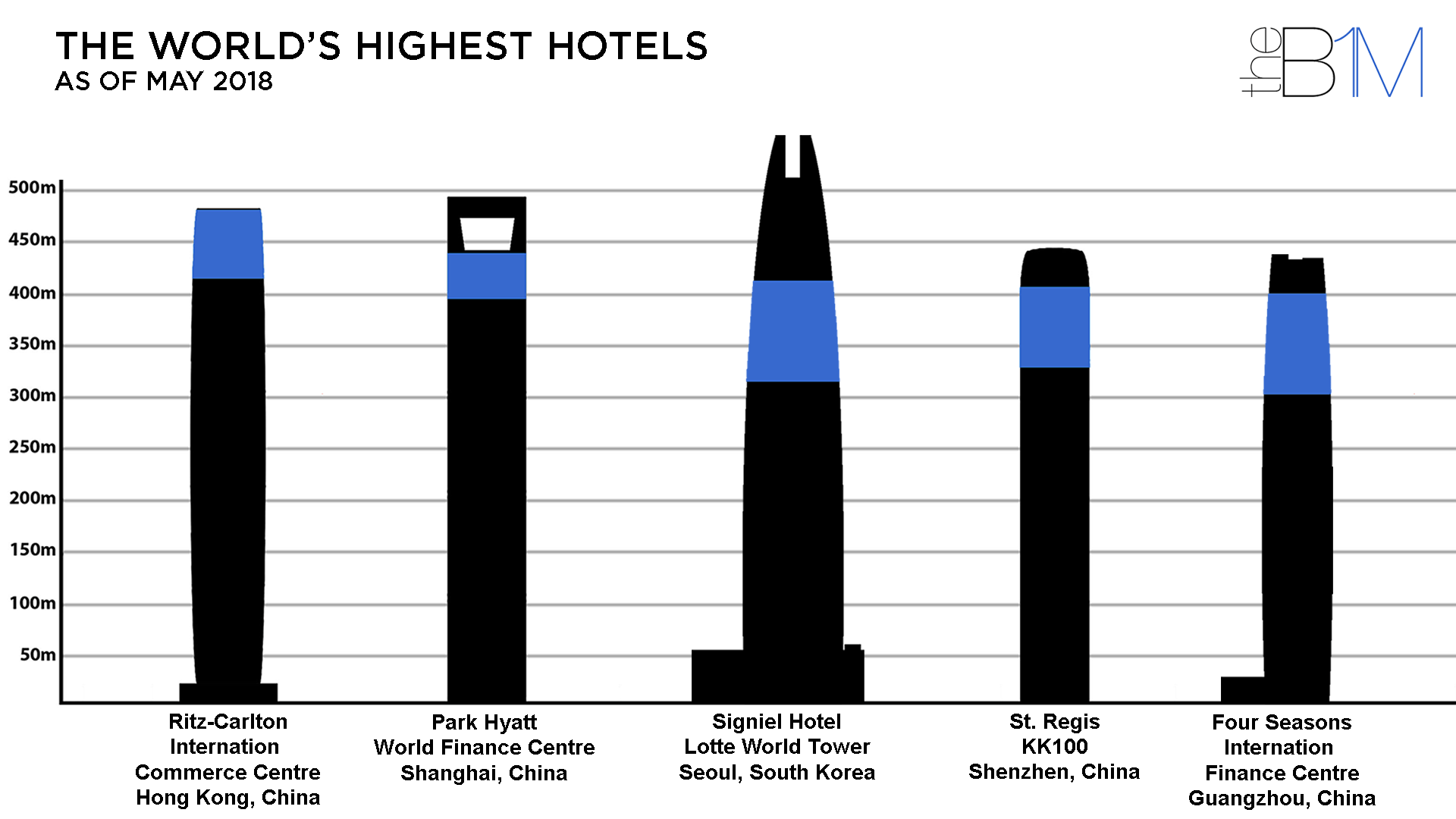 Above: The World's Highest Hotels and their locations within their respective skyscrapers.

The race to offer hotel rooms in the sky doesn’t stop there and at the time of filming and publication there are a number of even higher hotels under construction.

The Guangzhou CTF Finance Centre in China is set to open its Rosewood Hotel by the end of 2018, dethroning the Ritz-Carlton as the highest hotel in the world with rooms soaring above 500 metres (1,640 feet).

There’s also the rumoured, J-Hotel, in the 632 metre Shanghai Tower. The hotel’s operator has reserved levels 84 to 110 of the 123 storey skyscraper, but an opening date is as yet unconfirmed.