VYING to create the next engineering icon, architects and developers around the world are continuously proposing skyline-defining structures that would transform their surrounding cityscapes.

However, for every new skyscraper successfully constructed, there are countless design proposals that fall just short of becoming reality.

Once celebrated by their backers, but now forgotten and consigned to the footnotes of architectural history, we take a look at some of the greatest skyscrapers never built.

Proposed in the 1980’s for the La Défense district, the skyscraper’s name literally translates to “the tower without an ending” or “endless tower”. 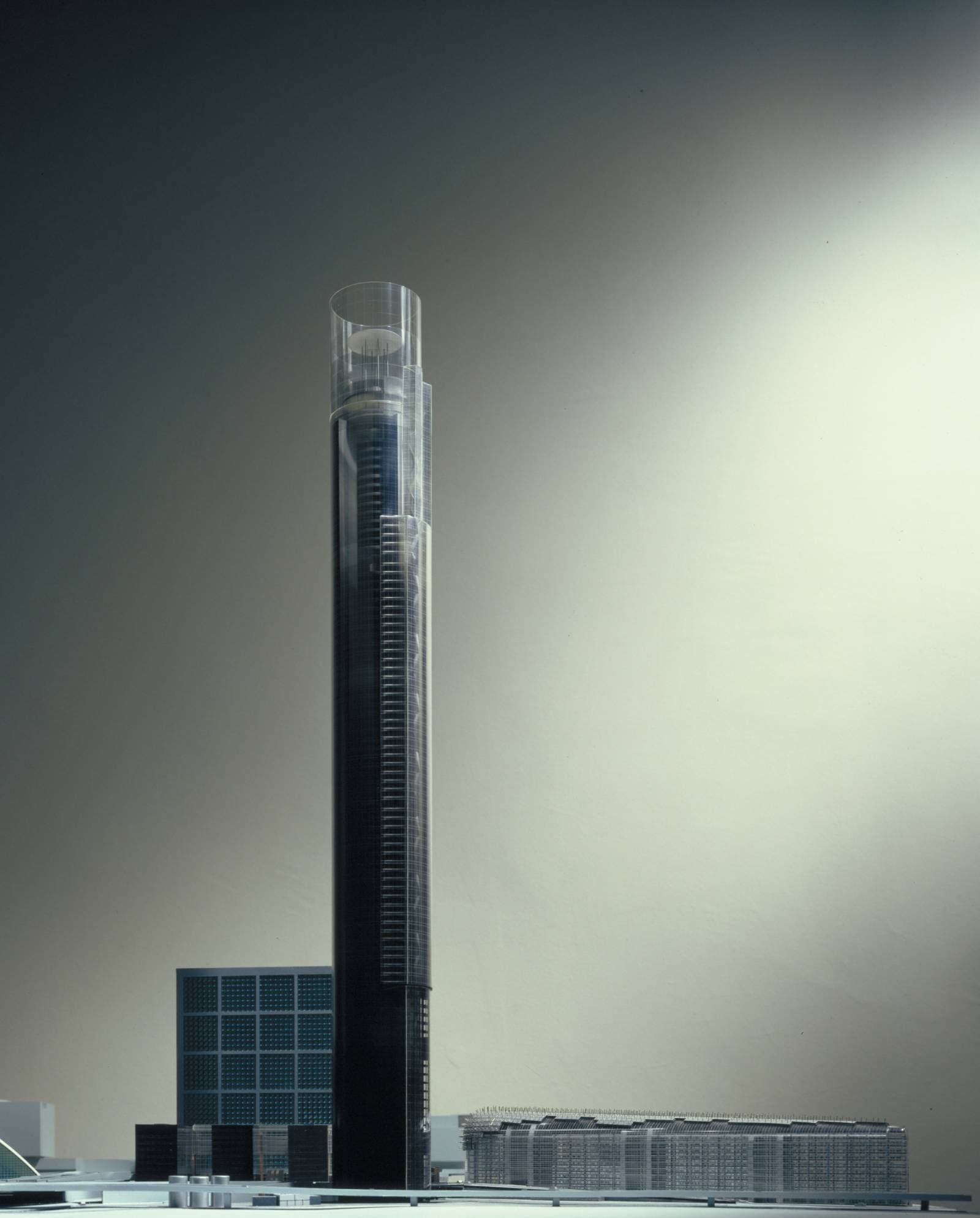 Above: Tour Sans Fins would appear to disappear into the sky. Image courtesy of Ateliers Jean Nouvel.

The cylindrical structure would have appeared almost completely black at its base, dissolving at its peak into translucent glass - seemingly dissipating into the sky.

This effect would have been achieved by a range of materials from unpolished black granite, polished stainless-steel and a variety of glass across the building’s facade, while panoramic lifts would have offered views across the city.

Despite several million US dollars being invested in the early design phases, the economic crash of the early 1990s saw the project cancelled.

The 1990’s saw developers in Melbourne seeking to bring the title of “world’s tallest building” to Australia in the form of a 678-metre high tower, intended to rival Sydney’s Opera House as an icon for the country.

Dubbed by its developer as a “Monument to Melbourne”, the building would have been topped by a dramatic 110-metre high beacon, lighting up the sky and becoming visible from more than 80 kilometres away. 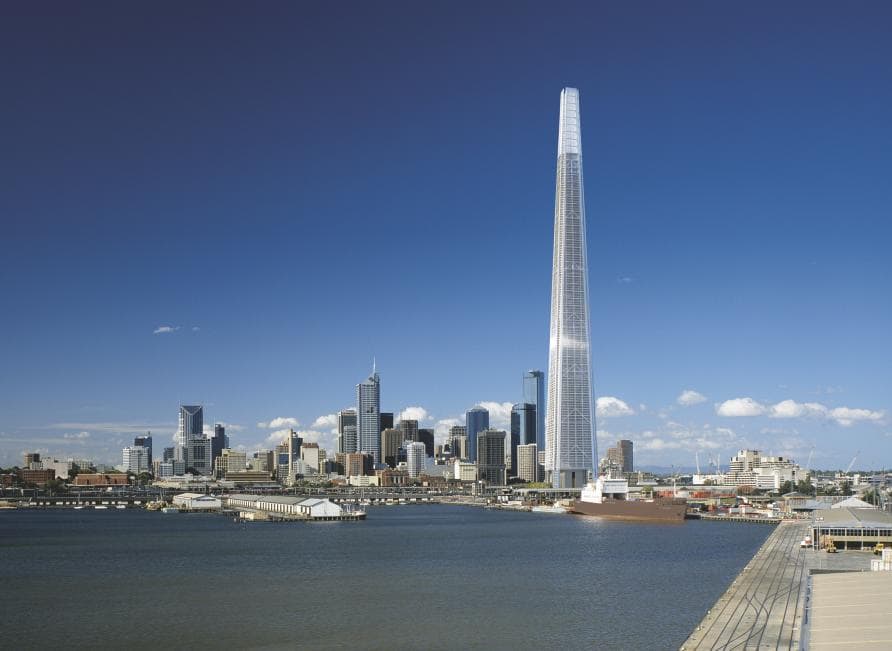 Above: The Grollo Tower would have given Australia the world's tallest building. Image courtesy of the Grollo Group.

After a series of setbacks which saw the structure’s height reduced to 560 metres, the project began moving through the planning process and buyers began laying down deposits for the 200 or so apartments within the tower.

With community concerns over the scale of the project growing and with disputes between the developer and planning authorities over who would be responsible for surrounding civil works, the project was ruled out of tender in 2001.

The site is now occupied by several smaller structures and the Grollo Tower’s designs were sold to Dubai where they went on to become the basis for the world’s current tallest building, the Burj Khalifa.

Now occupied by 22 Bishopsgate, the original plans for this site would have seen the more slender, eco-friendly Pinnacle Tower rising on London’s skyline.

Designed by Kohn Pedersen Fox (KPF) in 2005, the Pinnacle was inspired by organic forms found in nature and would have seen a twisting glass skyscraper climb to 288 metres; making it the tallest tower in Europe at that time. 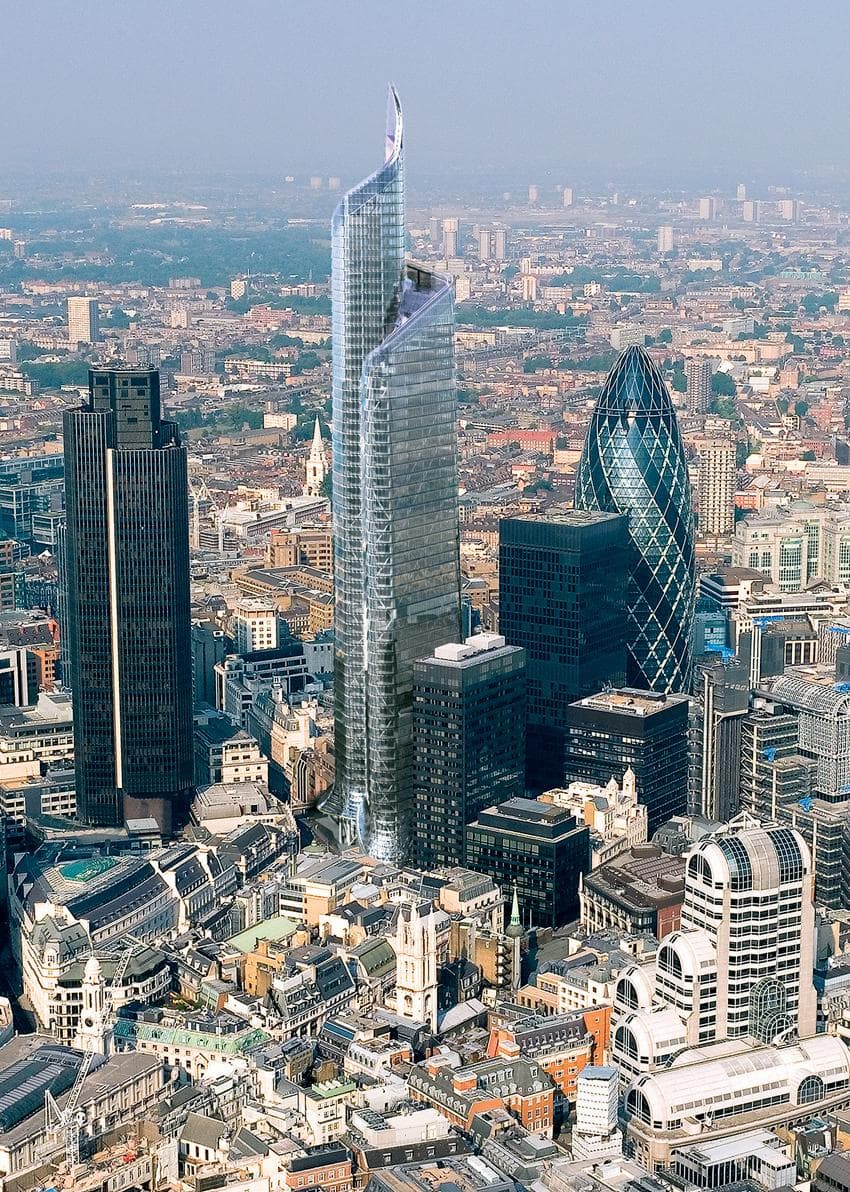 Above: The Pinnacle would have twisted above the London skyline, giving the city a new icon. Image courtesy of Kohn Pederson Fox.

Work on the foundations commenced in 2008 and the core rose several storeys before the global financial crisis hit. With an uncertain economic outlook, the site changed hands several times and construction finally ground to a halt in 2009.

Sitting idle in the centre of the city for a number of years, the concrete core became dubbed “the stump” by Londoners.

Plans for a radically redesigned structure were eventually submitted in 2016 and the tower now known as 22 Bishopsgate is set to officially complete in 2020.

Inspired by the smoke signals of Native American tribes, Santiago Calatrava’s plans for a 610-metre high spiralling glass tower in Chicago would have dramatically changed the city’s skyline.

With each floor set to be rotated by 2.4 degrees from the one below, Calatrava’s design would have created a striking building form that simultaneously helped to minimise the impact of wind loads.

The 150-storey structure would have been topped with an observation deck offering views across the city and into four neighbouring US states. 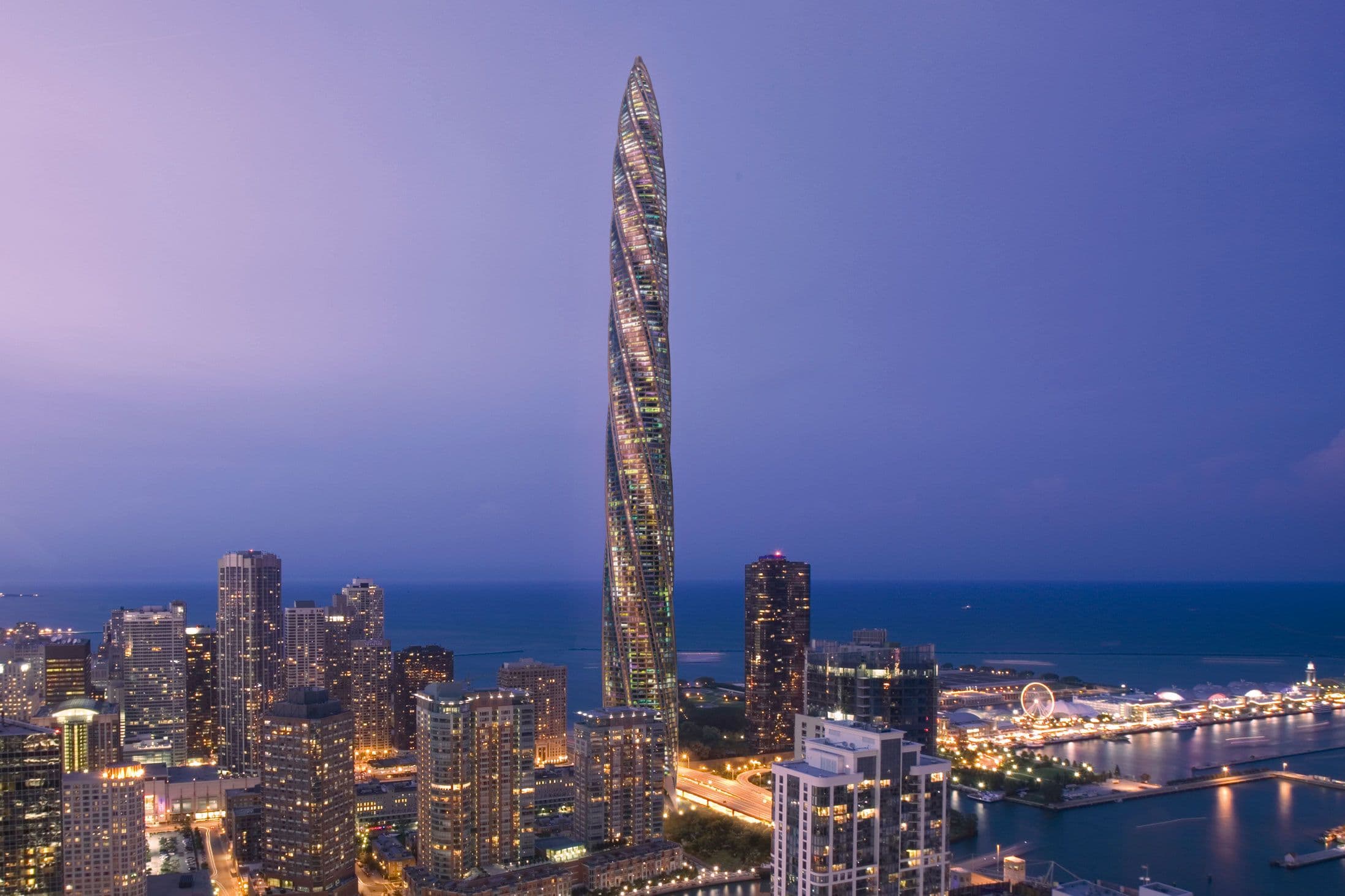 Construction started in 2007, but, like London’s Pinnacle, the project soon became a casualty of the 2008 global financial crisis. The large foundation hole on the site is still visible today.

Russia has long had ambitions to bring a megatall structure to Moscow.

Originally proposed in 1994 - and with early plans indicating a height of over a kilometre - the design and location of the imaginatively-named Russia Tower has since changed five times.

In 2006, British architect Sir Norman Foster re-designed the tower as a 612 metre super-dense “vertical city” that could have housed 25,000 people across 118 storeys.

The tower was set to be the tallest naturally ventilated skyscraper in the world with a triangular plan and an open green spine. 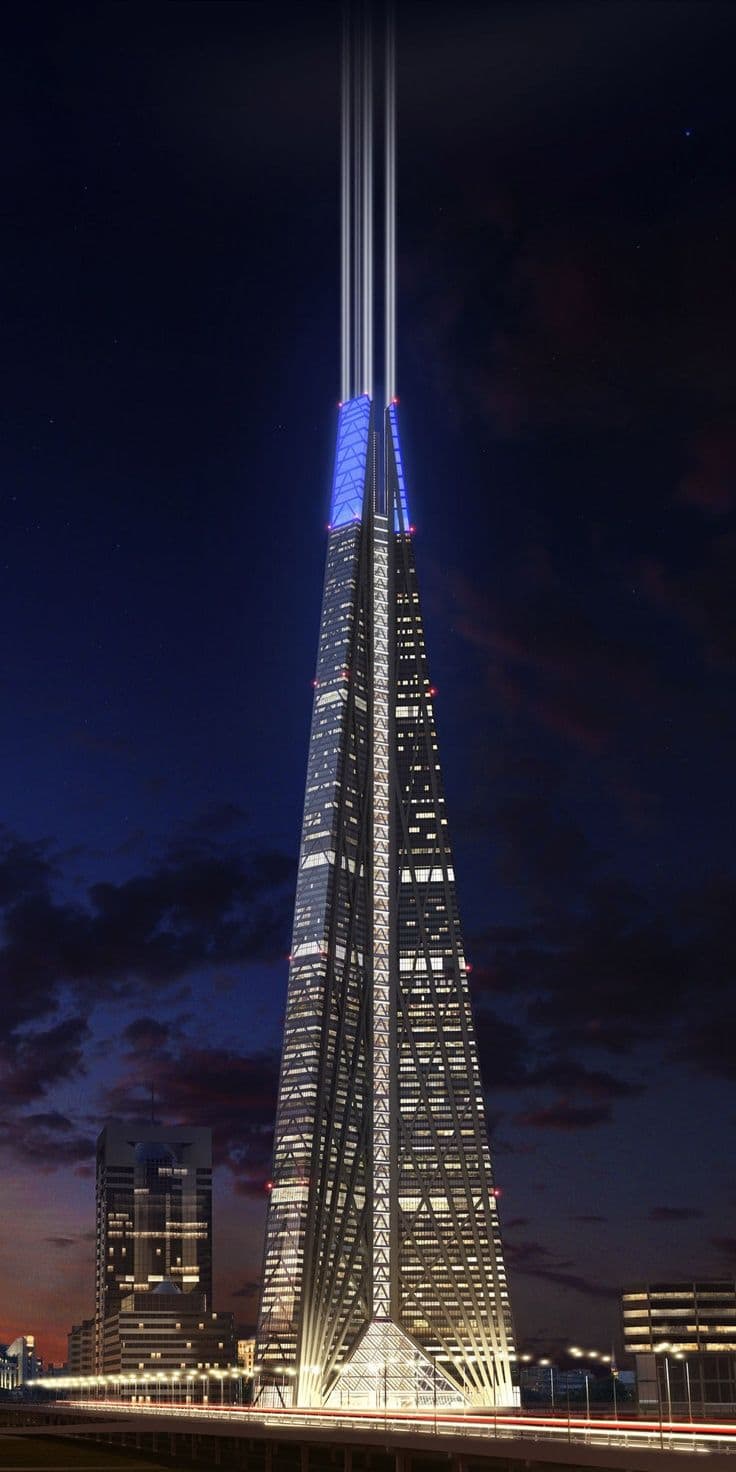 Foster borrowed many elements from the cancelled Millennium Tower in Tokyo - a conceptual unbuilt skyscraper that was to rise 800 metres above Tokyo Bay.

Construction began on the Russia Tower in 2007 before being paused in 2008 as the global financial crisis grew.

With demand for office space dwindling, the tower was officially cancelled in 2009.