The All-Night Race to Fix an Airport Runway

LONDON'S Gatwick Airport is home to one of the busiest runways in the world.

The B1M visited Gatwick's runway in the middle of the night to see firsthand how construction teams are racing to resurface the pavement bit by bit before planes start landing again in the morning.

But this is no ordinary bit of roadway. It’s a critical piece of infrastructure that millions of people, thousands of businesses, the UK’s wider economy and airports around the world all depend on.

The stakes are insanely high, and what this team is trying to pull off in such a tight time frame puts them in a different league of pressure.

“If a piece of the runway breaks out and ends up in an aircraft engine, the results are potentially catastrophic, because there's no room for a mistake,” senior project engineer Andy Mansell said.

If you’ve ever travelled into London, you’re probably familiar with Gatwick Airport. It’s one of the UK’s busiest, home to more than 50 airlines, flying to more than 200 destinations. But when it was first opened in the 1930s, it was just a small flyers club.

Above: The B1M's Fred Mills visited Gatwick Airport to see the runway resurfacing.

Over the years it’s been used as a public aerodrome, Royal Air Force base and in the 1950s it was renovated and officially opened as London’s second airport.  For a while, Gatwick was run by a government agency. But in the 80s, it was privatised and had to start finding its own revenue.

Since its official opening, Gatwick has gone from seeing less than half a million people pass through each year, to more than 45M at its peak in 2019. But traffic took a huge hit from the pandemic in 2020.

To say that’s been bad for business would be putting it lightly. For two years, Gatwick was losing roughly £1M per day on average. Losses like that makes construction projects like this a tough sell for a business that needs to cut costs. But as travellers return to the skies, Gatwick is in full swing working to return to full capacity.

It’s difficult to overstate just how much goes into making every travel experience possible. Throughout this 1,600 acre campus there are people issuing tickets, checking passports, monitoring the weather, directing air traffic and so much more. And the work never really stops.

There are just a few hours where the constant flow of planes slows. And even then, there are hundreds of people working to get ready for the next rush to begin the following morning. Of course, the runway is the backbone of this whole operation. Without it, the airport becomes more like a shopping mall with a car park.

If this single stretch of asphalt is out of service, the whole thing is thrown off. Flights get delayed, terminals get crowded, baggage claim gets backed up and pretty soon you have a whole lot of stressed out travellers. 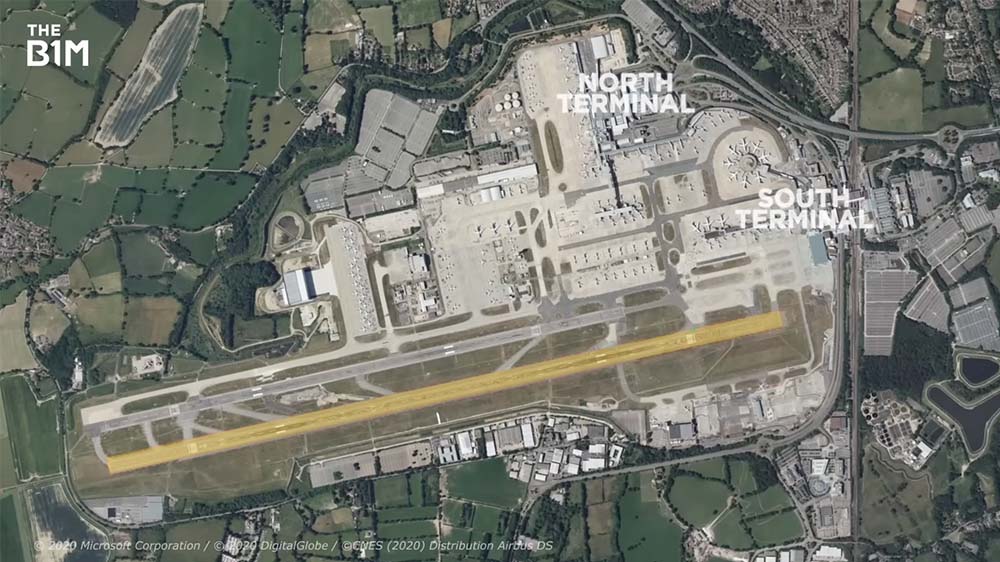 Above: Gatwick largely relies on a single runway for its operations.

Gatwick has two terminals, the North and the South. But there’s just one massive runway for all incoming and outgoing flights, making Gatwick the busiest single-runway airport in the world.  There is a second smaller runway that’s on standby, but it’s currently only used in case of emergencies. The main runway stretches 3,337 metres long and 44 metres wide. That’s the size of more than 1,400 tennis courts.

It was built in the 1950s with concrete, and has been paved over with new asphalt over the years. But it wasn’t designed to last forever, and it’s starting to crumble.

On a busy day, the main runway can handle more than 950 arrivals and departures. At some points, 55 planes are flying in and out of Gatwick every hour. That means flight paths need to be meticulously coordinated around the availability of the runway.

On a typical summer day, the runway will see an ebb and flow of departures and arrivals of the smaller planes from across Europe, and the bigger long-haul flights from around the world. Squeezed in between the waves of traffic, a gap is created for the maintenance crew to rush in and make sure there’s no debris or birds around the runway.

To make planning even more complicated, everything can change with a shift of the breeze. Planes actually work best if they’re flying into the wind. So if the wind is blowing to the west, everyone flies in and out of the east. But if the direction of the wind changes in the evening, everything flips to the other direction.

Since there are so many planes to coordinate, air traffic control coordinates the switch in a time window that will cause the least disruption. While the switch is happening, planes fly in circles in designated areas just outside the airport until all the traffic is rerouted.

It’s a 24 hour operation, and the margin for error is tight, which means any issues with the runway will cause a knock on effect for everyone. But the runway is starting to show its age, and if left untreated it would pose a threat to the safety of everyone flying. And with tens of thousands of people relying on this one piece of asphalt every day, making repairs is a race against the clock. 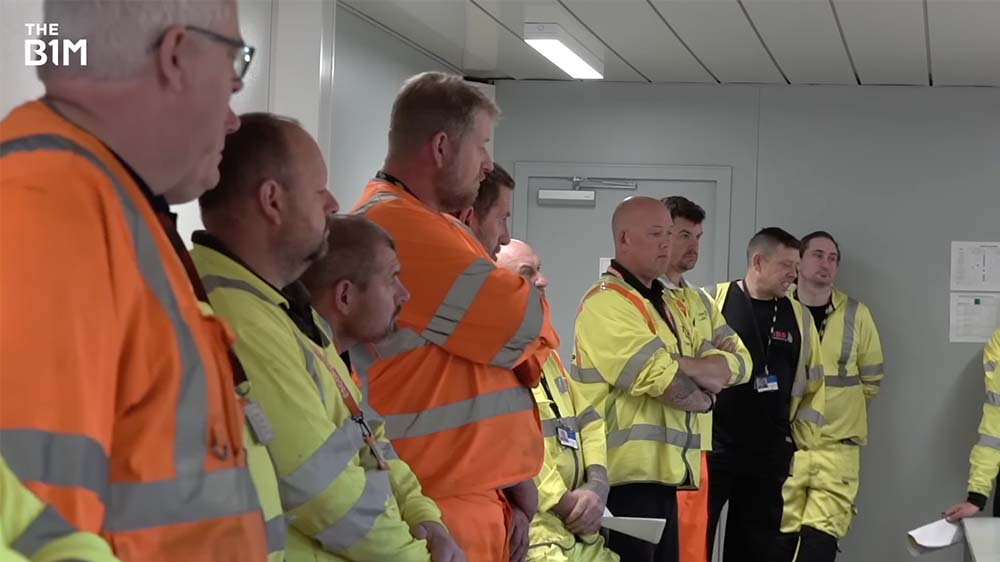 Above: The construction team met each night before the overnight shift begins.

For months, the construction team at Gatwick has been working with military precision to repave the runway from 9:30 PM to 5:30 AM every night.

This will be the fifth time the Gatwick runway is rehabilitated. It was last resurfaced in 2012, and it’s due for another upgrade. This new batch of asphalt is designed to last around seven years. They’re focusing the most resilient asphalt on the bits of the runway that planes traffic the most.

This isn’t just any old construction project, we’re talking about an airport here, which means there is a lot of security. Before anyone, including the team at The B1M, can get to the construction site, they have to pass through the same airport security as if you were flying.

That means every night, more than 100 people and 40 trucks full of materials have to be screened before any work can begin. And because there’s not much room for anyone, or any materials, to show up late, the team at Gatwick actually built their own supply chain just off the runway.

“It's not just your standard asphalt that gets stuck on the road outside your house or the pavement you walk down every day,” Mansell said. “You've got a really high specification material, which is why we have to build a bottling plant on site so that we can batch the material here ourselves.”

Around 6:30 every night, two brand new asphalt production plants are switched on in prep for the night shift.

About an hour before the overnight planes are rerouted to the backup runway, Gatwick meets with Colas and the wider contractor team to plan the night ahead.

Technically this project isn’t that complicated. The team is ripping up the old asphalt and laying down new material. It’s the same process that’s used on runway pavements all around the world.

But at Gatwick, they don’t have the luxury of shifting all their flights to another runway while construction takes place. 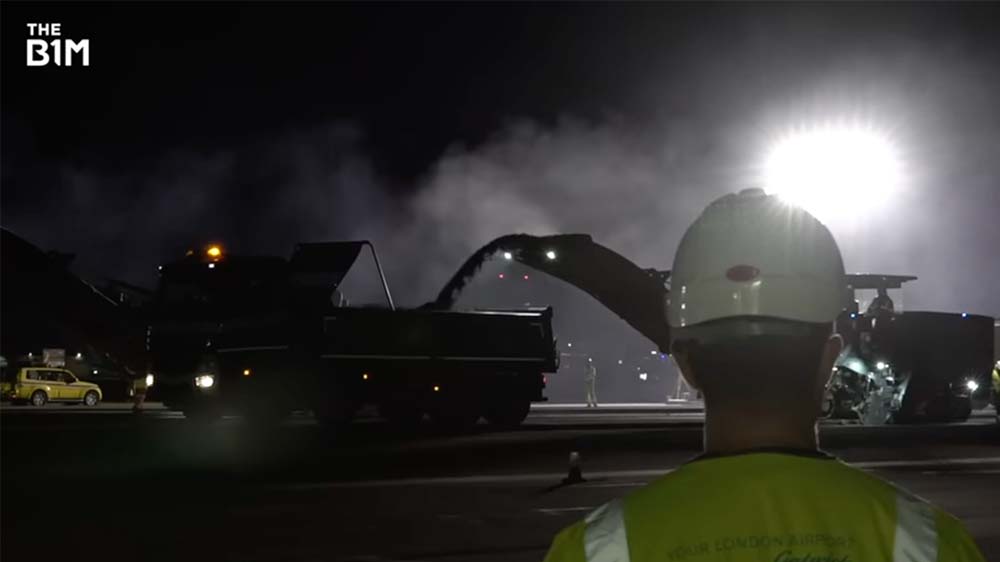 Above: Gatwick's runway resurfacing took place overnight in between takeoffs and landings.

So at 9:30 sharp, a crew of more than 100 people flood the runway and start their race against time. Believe it or not this is currently Gatwick Airport’s runway. The work moves in a sequence that’s repeated every night until they get to the end of the runway. First the lights that guide pilots to the runway are turned off and removed.

Then a fleet of machines remove the existing asphalt and save it to be recycled. Next comes a fleet of paving machines that lay two new layers of asphalt.

The biggest challenge is making sure it cools in time before the morning shift. And being in London, the rain is your enemy. Once the new asphalt is laid, a team of electricians work to put all the lighting back in so it’s ready for the next day.

Now, this is all happening in a matter of hours every night while flights are landing just over 100 metres away on the backup runway, and a queue of EasyJet planes are lining up just off the construction site to carry the first passengers of the day.

If the team gets any more than 15 minutes off track, they need to move straight into one of the many contingency plans that are kept in a playbook.  If they’re even a few minutes late cleaning up, or the asphalt isn’t totally cooled, there will be a lot of angry airlines and passengers waiting to get moving. Just a little bit of pressure.

Sure, paving a runway bit by bit every night might not seem like a lot, but the scale of this project is astounding. 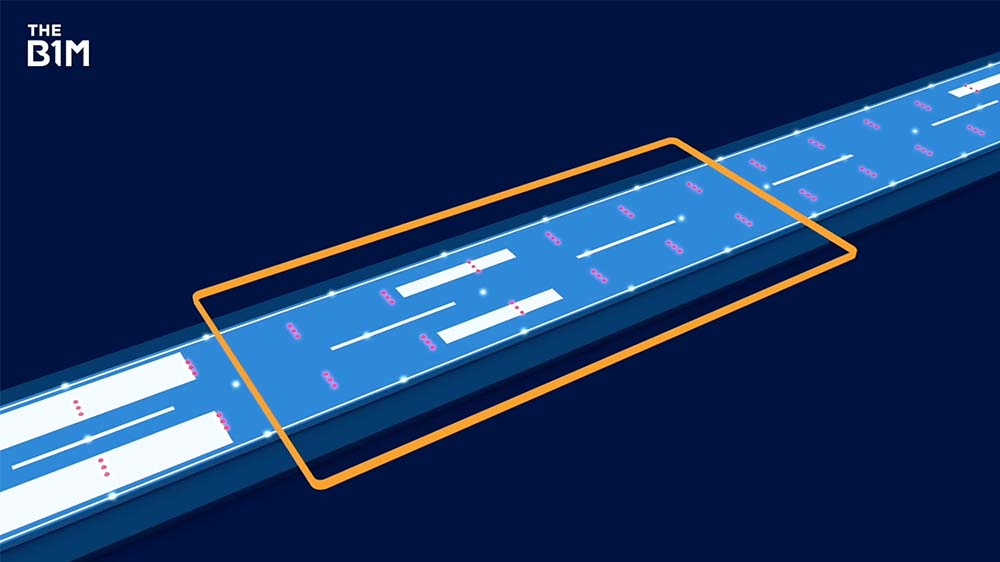 Above: The runway was resurfaced bit by bit each night.

Millions of people use this runway every year, and the entire airport operation needs to be in sync with the construction schedule. If one group is off, the entire operation could shut down, and nobody would get off the ground.

And Gatwick’s ambitions go beyond just this runway. Remember that backup runway they have in case of emergencies? Well, they’re in the proposal phase of turning that into a fully-functional second runway.

But it would make construction projects like this a whole lot easier, and it would allow for even more flights to pass through here every day.

“All the time, we have to be really focused on the fact that we're here to deliver a service for our airlines,” Mansell said. “And if we don't do that, it has impacts that can literally go worldwide. And that's quite sobering when you start thinking about it. That's just how interconnected worldwide aviation is. One runway resurfacing can knock on around the world.”