CHINA is no stranger to record-breaking infrastructure projects.

Already home to the world’s largest dam, longest ocean crossing and most extensive high-speed rail network, the country has now completed one of the largest airports ever conceived.

With one of the world’s largest economies, the demand for air travel in and out of China is extreme. As the nation’s centre of political power - and as the second-largest city in a country of more than 1.3BN people - the pressure on Beijing is particularly intense.

Plans for a second international airport were first proposed in 2008, while the existing Beijing Capital International was undergoing a USD $3.5BN expansion ahead of the summer Olympic Games.

Despite these works, forecasts predicted that, even with its expansion to cater for 83 million passengers annually, the airport would exceed its capacity within just a few years of the extension being completed.

Sure enough, the facility reached capacity in 2012 and by 2016 more than 100 million passengers were travelling through the airport each year.

To alleviate pressure on the existing airport and safeguard Beijing’s economic growth, a new hub was conceived. With initial proposals suggesting nine runways and capacity for more than 200 million passengers each year, the vast Daxing International was originally intended to replace Beijing Capital as the city's main airport. 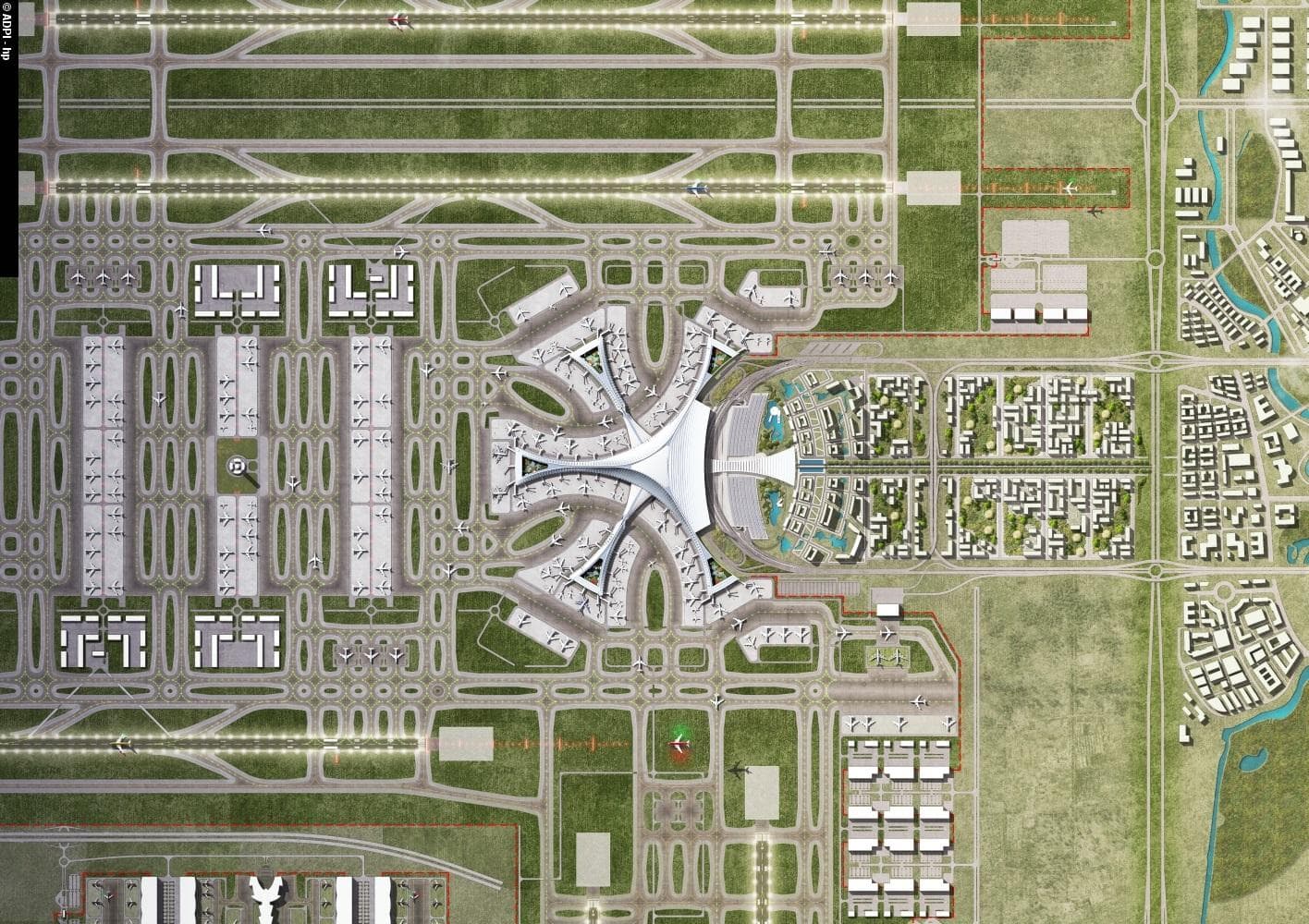 Above: The original masterplan called for an airport with capacity for 200 million passengers annually (image courtesy of Zaha Hadid Architects).

However, in 2014 the decision was taken to operate both facilities simultaneously and to scale back the new airport’s design.

Plans for the new airport were released by Zaha Hadid Architects in early 2015.

Collaborating with airport specialists ADPI on the main terminal building, Hadid moved away from the linear model of airport design - which often created sprawling facilities - and instead introduced a six-pointed star arrangement that puts passengers less than 600 metres - around an 8-minute walk - from any departure gate.

While one arm of the building operates as an administrative centre, the remaining five accommodate the airport’s 79 departure gates.

Daxing International incorporates a number of high-speed rail and metro links to Beijing and the surrounding provinces.

The airport will have a dedicated stop on the new Beijing-Xiong-an Intercity Railway - placing it just 20 minutes from Beijing - while the Intercity Railway Connector will provide a direct link to Beijing Capital International and neighbouring regions. There will also be a link to the city’s subway system.

While many airport links around the world deliver passengers to the outskirts of facilities, the numerous connections to Daxing International will arrive beneath the terminal, enabling direct access to the departure levels. 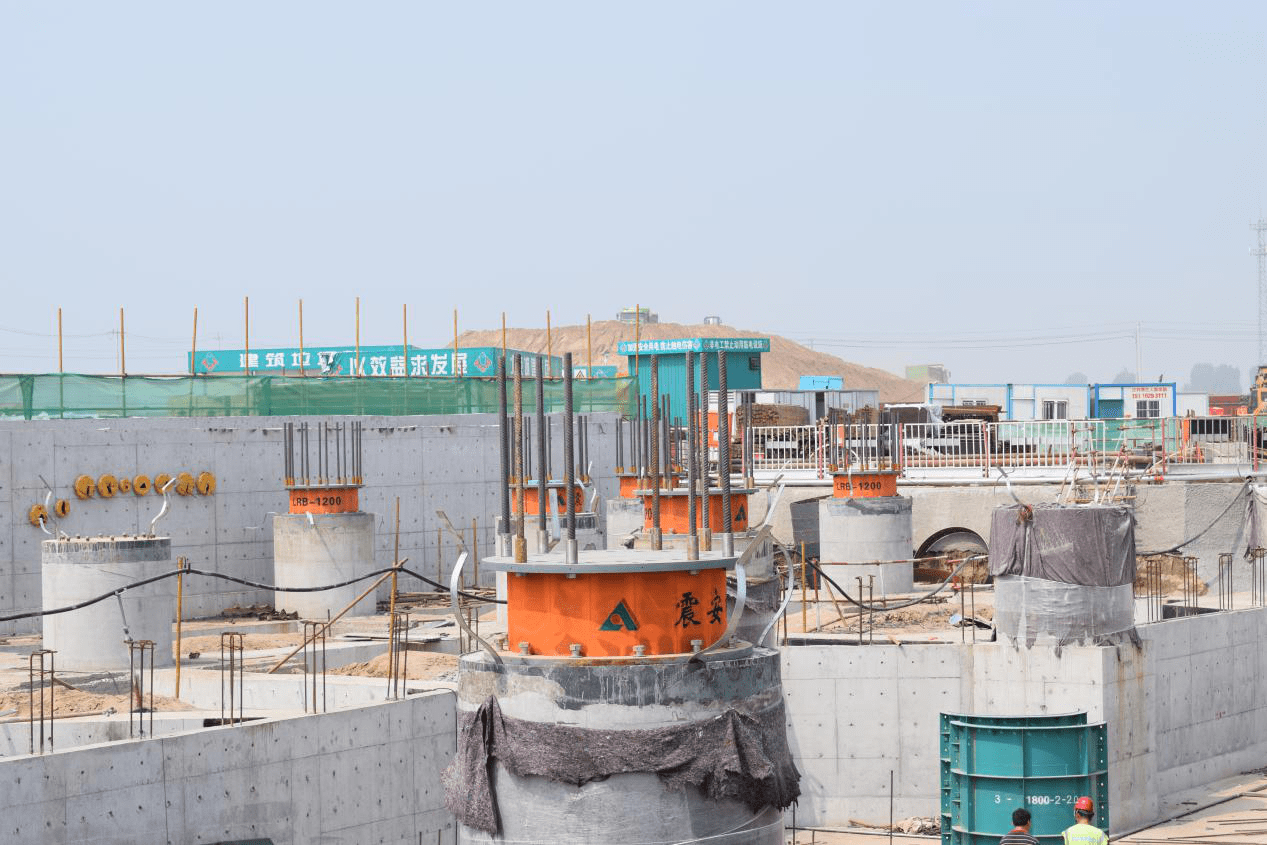 Above: Anti-seismic isolation bearings in the ground floor slab allow the terminal to resists earthquakes of up to eight on the Richter scale ( image courtesy of Quakesafe).

In order to withstand the vibrations caused by high-speed trains that can travel up to 250km/h beneath the terminal in an active seismic zone, 1,000 anti-seismic isolation bearings were built into the terminal’s ground floor slab allowing the structure to withstand an earthquake with a magnitude of 8.0 on the Richter scale.

With 197,000 passengers expected to use the airport each day, Daxing International will operate a largely paperless system that features AI facial recognition at check-in, self-service bag drop facilities and real-time mobile baggage tracking.

It will also be the first airport in the world to operate vertically dual departure and arrival floors. 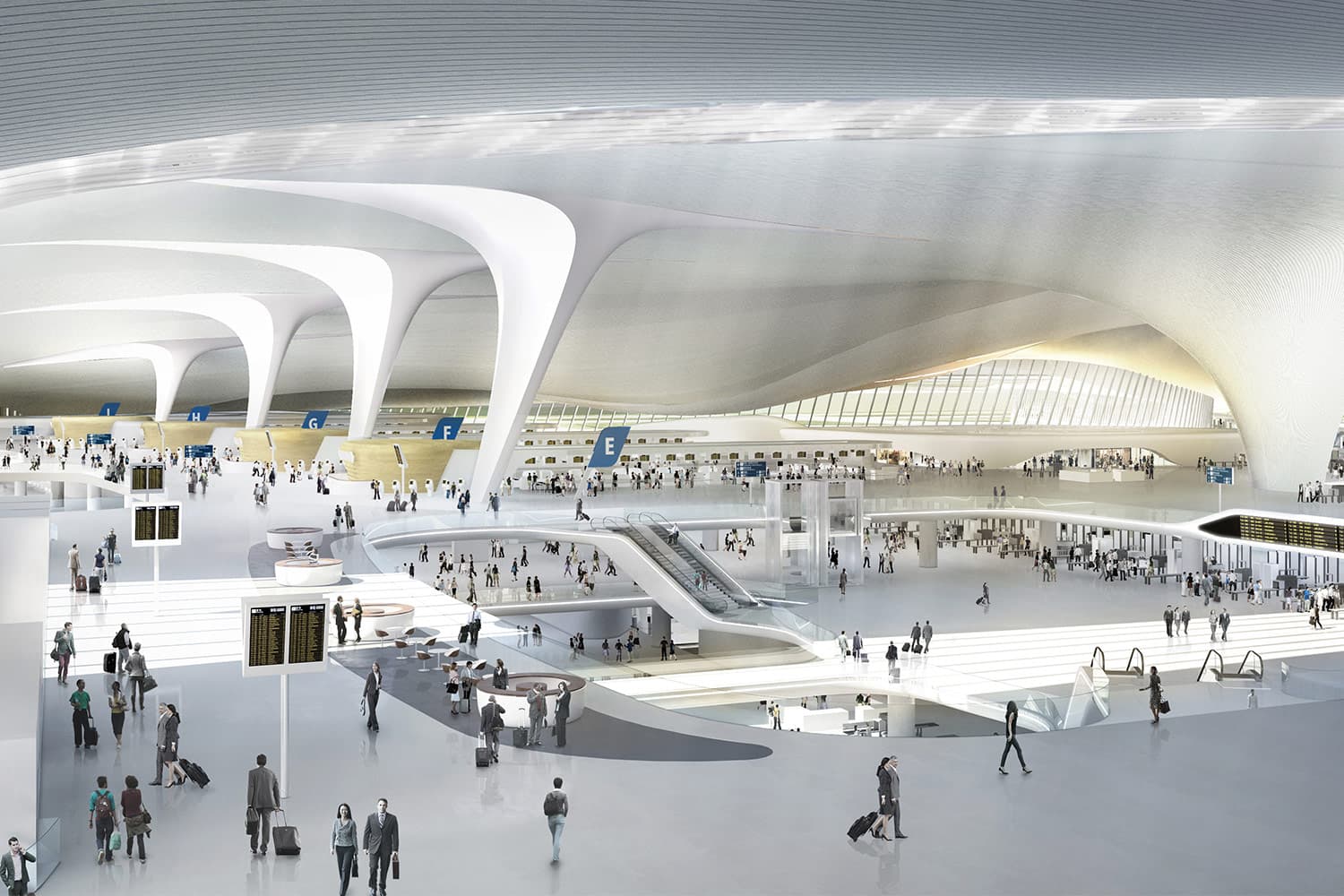 Above: An internal render of the completed airport (image courtesy of Zaha Hadid Architects).

This approach enables faster check-in and security screenings while significantly reducing the distances that passengers travel between connecting flights.

Extending for over a million square metres, Daxing International’s terminal building is one of the largest single structures ever built.

Formed from over 1.6 million cubic metres of concrete and some 52,000 tonnes of steel, the building integrates photovoltaic (PV) panels and rainwater harvesting systems across its vast undulating roof. 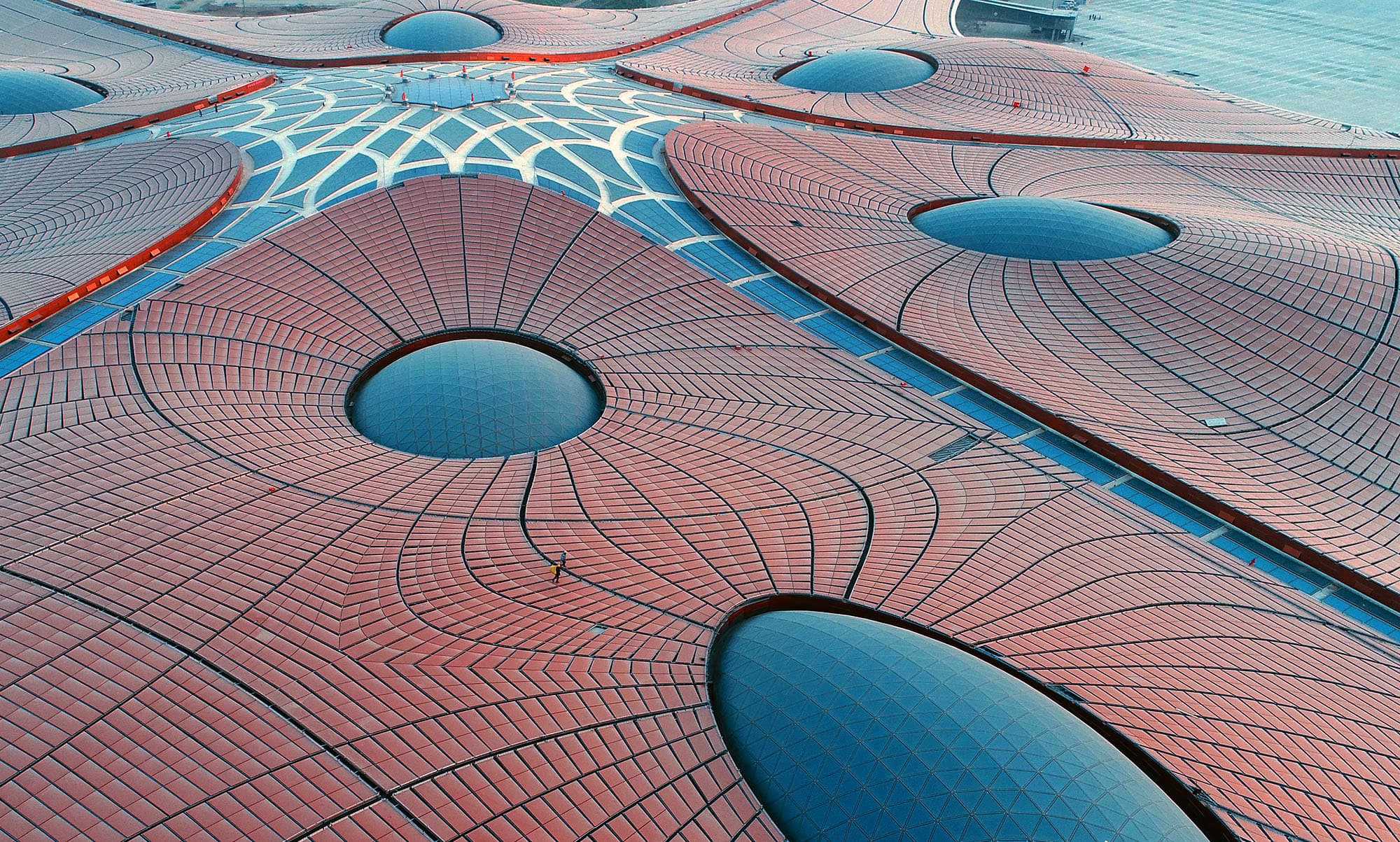 Above: The terminal building is one of the largest single structures ever built (image courtesy of VCG).

Reaching practical completion in 2018, the first flight inspections took place in January 2019 while finishing touches were made to the terminal building’s interior.

While the airport offers many of the retail, dining and entertainment options found in most hubs, Daxing International will also feature an interactive pet hotel, childcare and nursery facilities and hybrid online retail and dining experiences for passengers.

Meanwhile, on the runways, aircraft taking off and landing will be protected from birds or civilian drones by an Israeli AI software monitoring system. 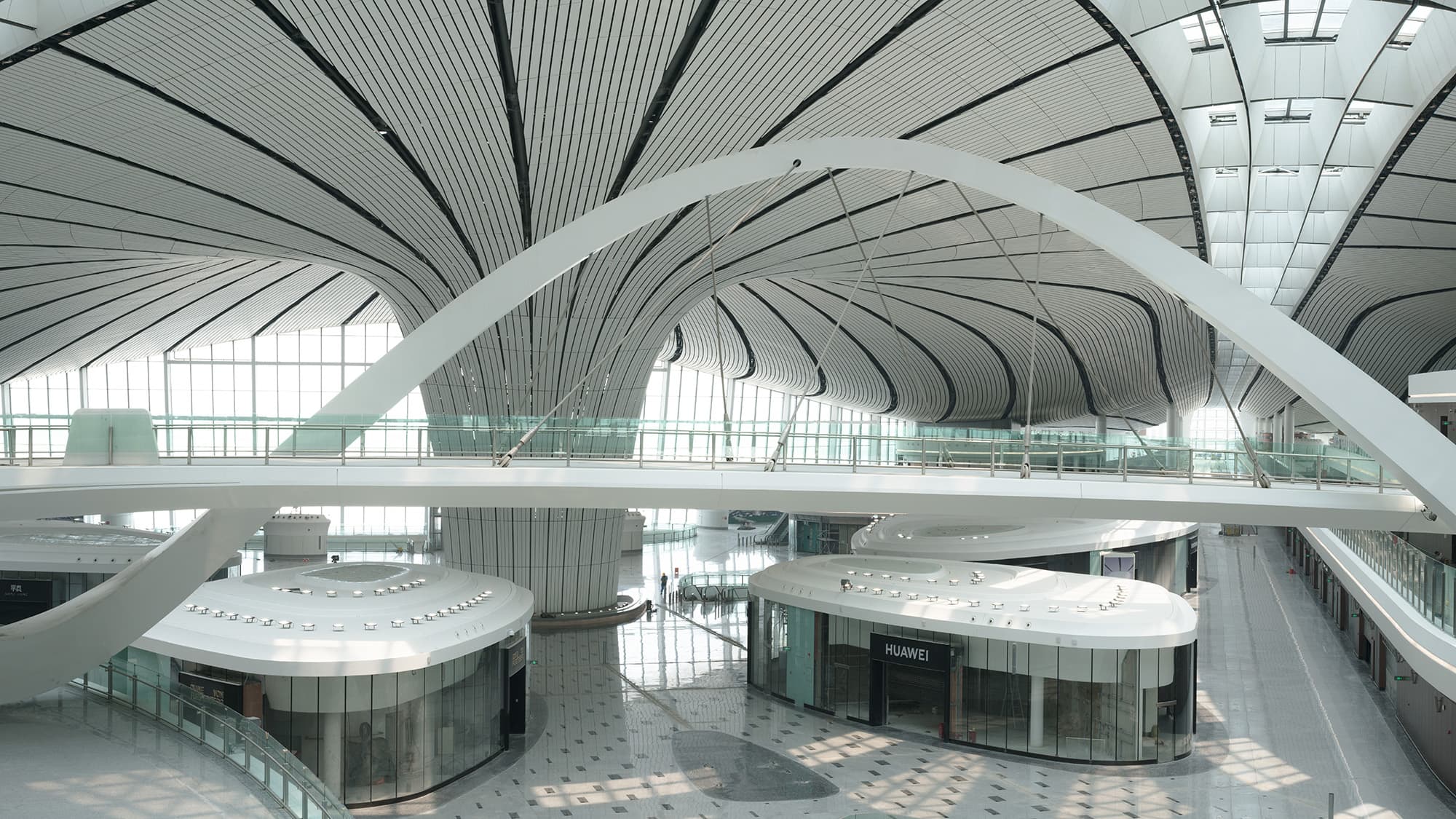 Above: The completed terminal is now ready to welcome passengers (image courtesy of Zhou Rougu Photography).

The entire airport cost almost USD $12BN to deliver. While this makes it easily one of the world’s largest construction projects, it is notably less than the projected USD $17BN required to construct a third runway at London Heathrow.

Having now completed its operational testing, Daxing International is set to welcome its first flight on 30 September 2019, less than five years since construction works first began.