UNDERGROUND TUNNELS that serve as secret bunkers crawling with aliens and lizard people. An array of strange symbols linked to the Illuminati and the New World Order. Sinister murals that hint towards the world apocalypse. And a cursed blue horse sculpture with piercing red eyes known as ‘Bluecifer’.

These are just some of the many strange conspiracies you might have heard about when flying through Denver International Airport in Colorado.

Ever since its construction, outlandish rumours have been a hot topic among conspiracy theorists – and in recent years – ones that the airport itself has fully embraced.

But mysterious murals and odd symbols might not be the only thing you’ve noticed in Denver. As America’s third busiest airport – with over 58 million flyers in 2021 – Denver is racing to keep up with increasing passenger demand, and its $4.3BN reconstruction project is aiming to complete by 2028.

But it hasn’t been without unexpected delays, all of which seems to be further raising suspicion among the conspiracy sleuths.

So how does the world’s weirdest airport plan to accommodate more travellers? And is it really all just a cover up for something more cryptic going on behind closed doors? 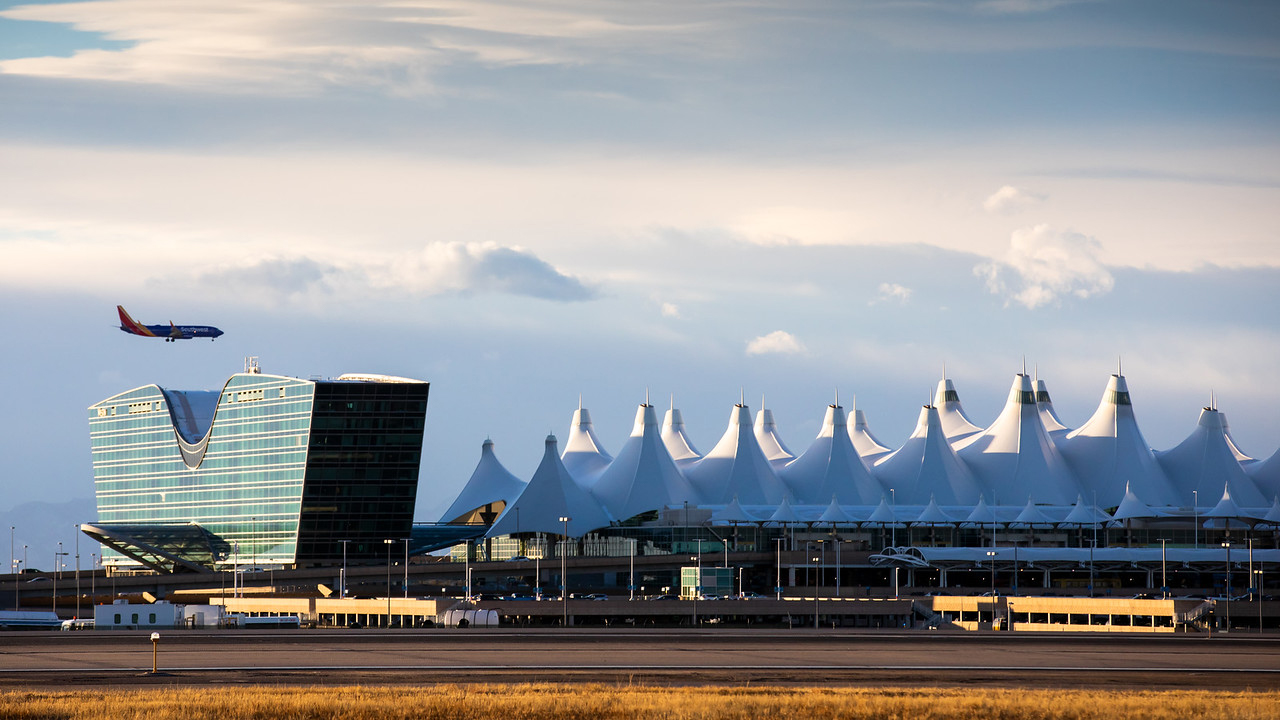 Denver International has pretty much always been shrouded in controversy.

Before opening back in 1995, its construction was a target of public opposition. Many believed the original Stapleton Airport was perfectly acceptable and that any new facility would just bring more traffic and pollution to the area.

But Stapleton was already bursting at the seams and the site wasn’t nearly large enough for the size of expansion needed. So in 1989, Colorado began building an entirely new airport on the northeast edge of Denver – far away from anything else – and Stapleton was abandoned completely.

The project didn’t go well. The airport was supposed to complete in 1993, but a complex design, financial struggles, and some contractual disputes meant that the first plane didn’t take-off until 16 months later in 1995. By that stage the whole thing was $2BN over budget. People began to question things and it didn’t take long before several conspiracy theories began circulating. Why was construction so delayed? What was that extra $2 billion dollars really used for?

Tunnels housing a new innovative baggage system failed to work properly and a dedication plaque bearing the symbol of the Freemasons all raised eyebrows. The airport’s strange artwork only added fuel to the fire.

Many were also suspicious of the airport's sheer size. When construction was completed, it became the largest in the US by surface area at over 130 square kilometres – twice the size of Manhattan.

Yet just like Stapleton, Denver began having trouble keeping up with increasing passenger demand over the years and its facilities were ageing quickly. Designed to handle 50 million people a year, the airport saw nearly 60 million pass through in 2021 – and those numbers are going grow to nearly 100 million over the next 8 to 10 years. To prepare for the future, Denver has devised a plan and in 2018, started work on two major construction projects. 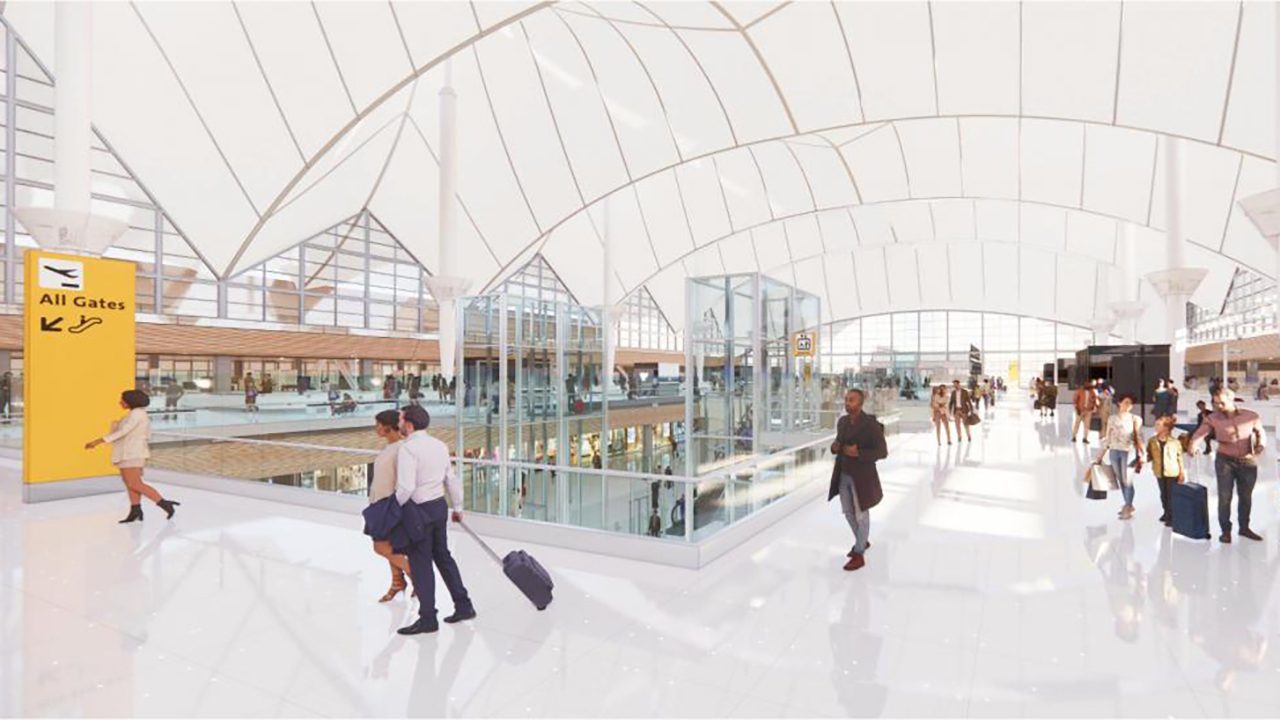 First off, the Great Hall is undergoing a $2BN renovation. Transport to the gates will also be improved by adding and replacing outdated train cars.

In the second project, concourses are adding some 39 new gates; creating space for more passengers and more planes.

"We have Vision 100, which is really aimed at preparing all the different parts so that we're able to handle all the passengers," says Jim Starling, Chief Construction and Infrastructure Officer. "A lot of the capacity in our terminal to get people to the gates. We'll be increasing our security checkpoints by over 60%."

The Great Hall work is being done in three phases. Each aims to enhance airport security, improve operational efficiency, and increase capacity.

Phase one was already completed in late 2021 and created nearly 3,000 square metres of additional space for the Jeppesen terminal. It also modernised the check-in space by installing 86 self bag-drop units.

Similar to the challenges seen in the airport’s original construction, the project hit some turbulence early on.

According to a report filed by Great Hall Partners – the contractors in charge of the project – the delays were down to the concrete. The material found in the terminal was weaker than expected and could not bear the weight of equipment. Due to safety concerns, construction was halted completely.

But when it was tested further by the airport, no safety issues were found. A load of back and forth was set off between the contractors and the airport, and the internet got a whole new pile of fodder for its conspiracies.

Starling states, "The original Great Hall Project was going to be completed through a public private partnership. That contract ended up being terminated. So now we're moving into the program where we are using a concessionaire."

That concessionaire is Hensel Phelps, who was brought in to complete the project instead.

In 2021, phase two finally lifted off and that looks set to finish by 2024. This phase includes redesigning a new security checkpoint with improved technology. Much like European airports, the updated plan will send smaller groups of 30-40 people through 17 lanes of security, instead of one long line. Additionally, the balcony of the Great Hall will be extended out to create more space. 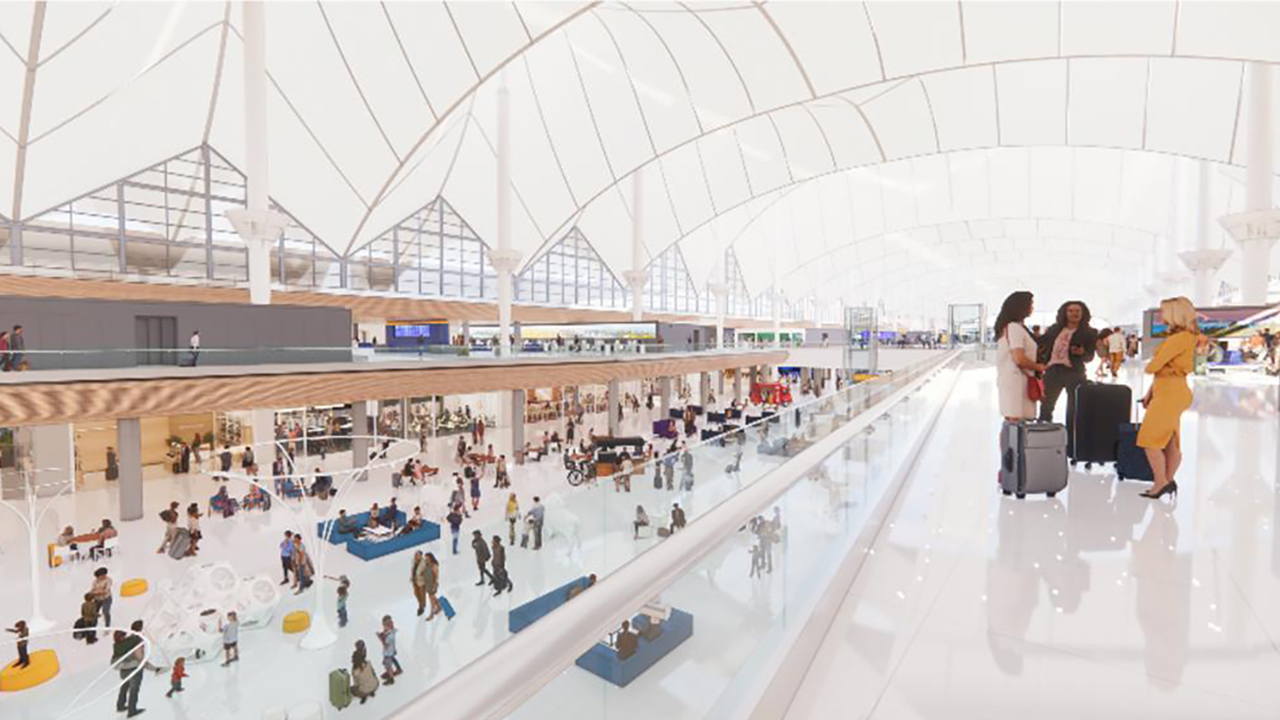 Above: How the new and improved Great Hall might look. Image courtesy of Denver International Airport.

Meanwhile, it wasn't until 2022 that the city's council approved the third and final phase of the project. Phase three will add yet another security checkpoint and new check-in areas for all remaining airlines. It’ll also upgrade facilities such as bathrooms, floors, and lighting. Overall, the airport hopes the final project will be wheels-up by 2028.

Like most construction projects, the renovations at the Denver Airport have been pretty noticeable. Giant white walls block off sections of the terminal’s ongoing work and nothing sets off the conspiracy theorists quite like that. But instead of letting the rumours hold it back, Denver is taking advantage.

"Our former CEO, Kim Day, she loved that we could show some personality through that, " says Stephanie Figueroa Public Information Officer. "We just we wanted to do something fun and creative to talk about the construction, and we like to embrace the fun side of things. So we developed a campaign around the the conspiracies to go in the Great Hall.

Plastered along these white walls are quirky posters alluding to the airport’s conspiracy theories. There’s even that talking gargoyle a interacts with passengers about all the theories.

The marketing stunt has proved successful for the airport. According to the Public Relations team, these efforts have resulted in over $1.5M worth of publicity.

You won’t be surprised to learn that the official line in response to these conspiracies is all a bit dull. The artwork is just artwork and the odd symbols merely represent the idea of a new international and global airport. And as for the tunnels Figueroa says, "Really, our tunnels are just to get baggage through to the airport and across our concourses. It's kind of just our mode of transportation underground and getting those baggage carts."

Together, the gate expansion and Great Hall projects hope to aid the Denver airport as passenger influx increases over the next few years.

"We're also looking at additional runway capacity. So we currently have six runways that are operating," mentions Starling. "The original layout of the airport had 12 runways identified. So we're just starting the environmental work to take a look at where to put that runway in, anticipating it would be needed within the next ten years."

In all, Denver seems to be on track to navigate its challenges and complete its work by 2028 ready for the first major meeting of the New World Order – we mean – increased passenger capacity.