FOR THOUSANDS of years, our cities have grown and developed around rivers and coastal inlets.

These waterways allow urban centres to connect with the global economy and until the advent of commercial flight, were the most efficient way a city could do trade and fuel its economy.

To connect populations and drive economic growth, humans have been building their way over and under the rivers in our cities for millennia. 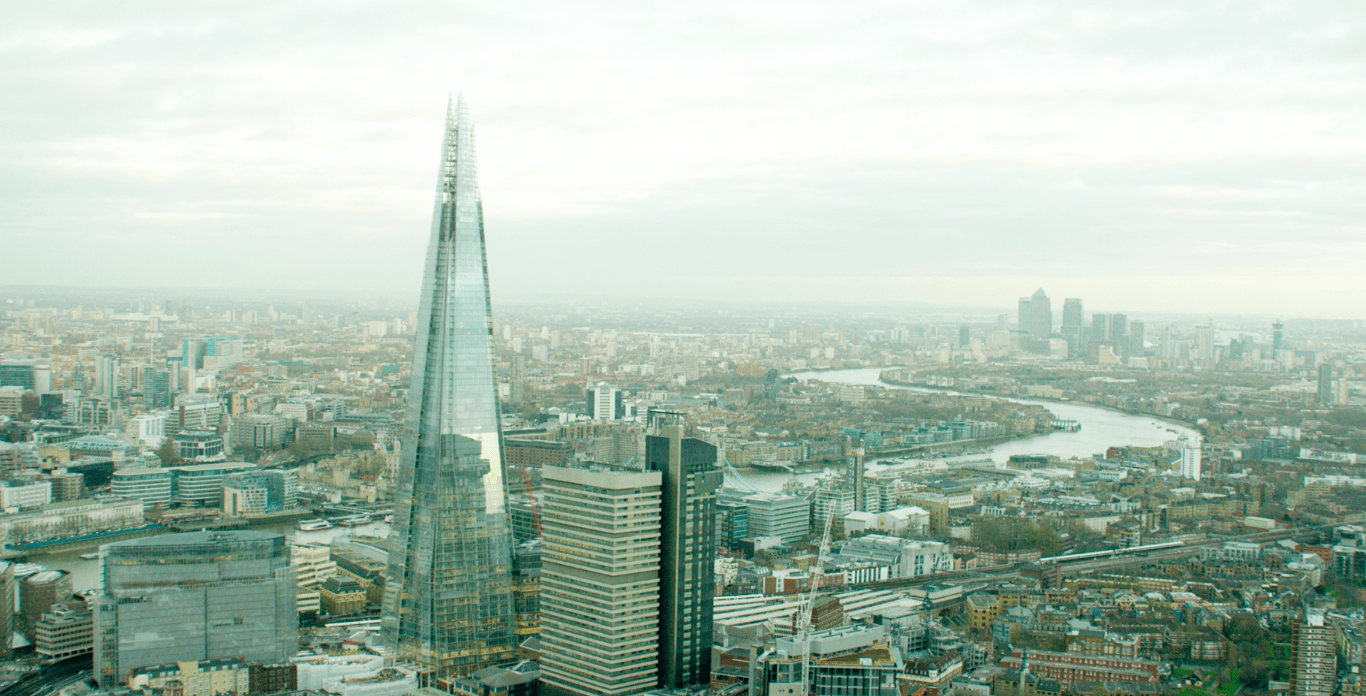 Above: Snaking its way through the heart of London, the River Thames has been the lifeblood of the city for millennia.

Running for 346 kilometres (215 miles) through south east England, the River Thames is the lifeblood of London and has played a key role in its development over the last 2,000 years.

The United Kingdom’s capital is now one of the largest urban areas in Europe and millions of people use structures to cross the river at its heart every day.

Here, we take a journey down the Thames and look at some of the most innovative and impressive crossings keeping London moving.

We are starting our journey upstream and just to the west of Central London, where the Albert Bridge connects Battersea with Chelsea.

Built in 1873, the bridge is the last remaining example of an Ordish-Lefeuvre design. Whilst the original structure was a modified cable-stayed bridge, it was altered between 1884 and 1887 to address structural weaknesses and elements of suspension bridge design were introduced.

Above: Illuminated at night by more than 4,000 LED bulbs, the Albert Bridge is one of the most beautiful crossings on the river ( image courtesy of  David Iliff).

The rise of cars in the 20th century presented further challenges for the structure and the bridge was again modified.

This time, concrete piers were added to support the central span making the Albert Bridge a truly hybrid structure that features elements of Suspension, Cable-Stayed and Beam bridge design.

Although the Albert Bridge is today the second least-used bridge in London (after Southwark Bridge) - mainly due to limits on traffic volumes imposed to prolong its life span - its elegance, boosted further at night with some 4,000 LED bulbs, makes it arguably the most beautiful of all the Thames crossings.

Moving down-river and into central London, we come to two very similar looking bridges connecting Westminster on the north bank and Lambeth on the south.

The current Lambeth Bridge is the second iteration of a bridge to be located just south of the Palace of Westminster.

Above: The Lambeth Bridge is painted red in a nod to the House of Lords located nearby in Houses of Westminster (image courtesy of Dan Cortese).

The original bridge was built in 1862 and used a suspension structure. However steep approaches meant that many horses were afraid to cross the bridge and it ended up being used almost exclusively by pedestrians.

Also suffering from corrosion the original, under-utilised Lambeth Bridge was replaced in 1932 by the current five-span steel arch bridge we see today.

Built between 1739 and 1750, the original Westminster Bridge was set to be formed from timber atop stone piers.

However, in the winter of 1739-40 - early on in the bridge’s construction work - the Thames froze solid damaging the 140 piles that had been driven into the riverbed. This led to a re-design of the crossing - and proposals for a masonry structure were adopted.

In 1750, a 15-arch masonry bridge was completed, becoming the first permanent river crossing in central London for nearly 600 years.

But by the mid 19th century, increased tide flow in the Thames was causing the structure to subside, and the bridge was replaced again in 1862 with the seven-arch cast iron crossing we see today. 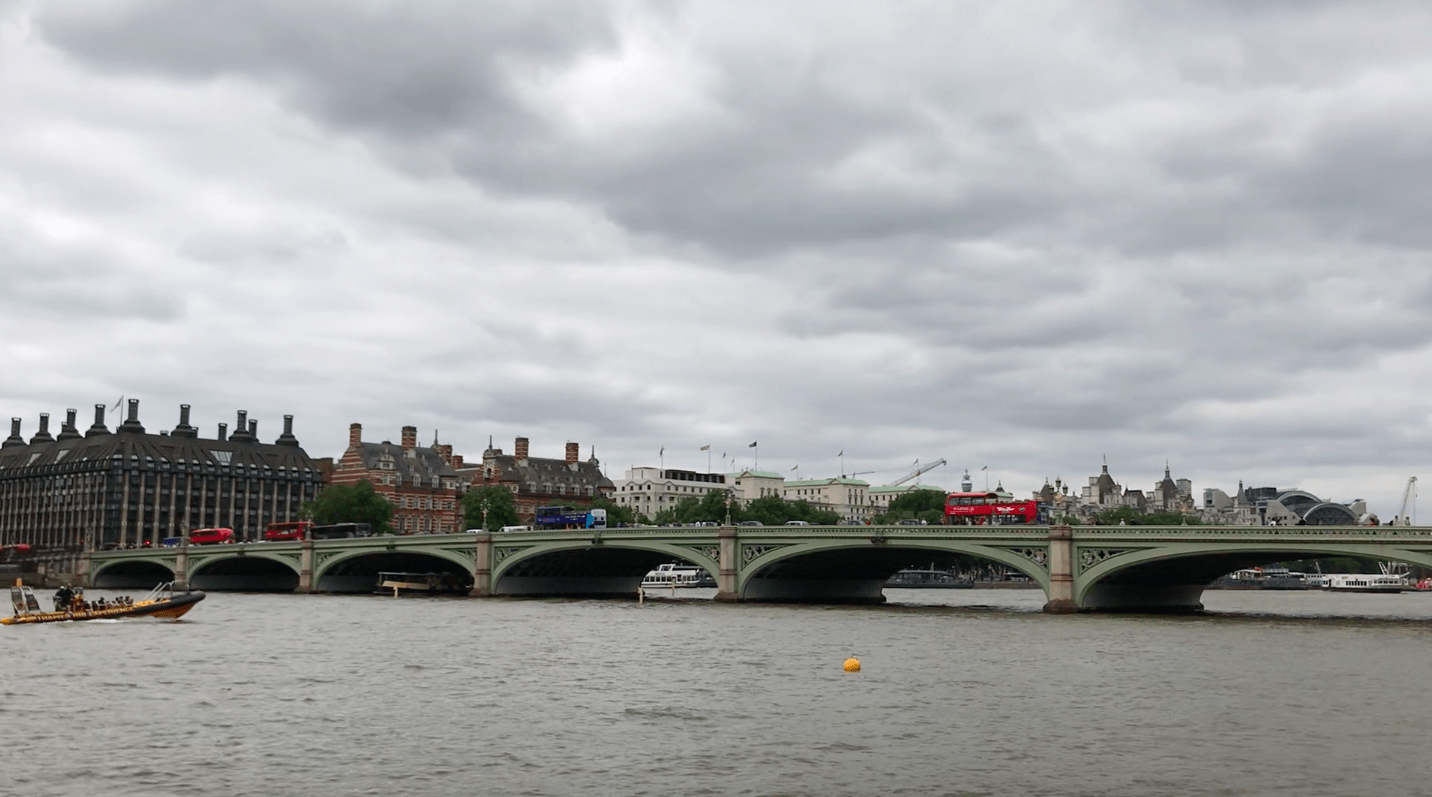 Above: The Westminster Bridge owes its green colouring to House of Commons in the adjacent Palace of Westminster (image courtesy of Dan Cortese).

THE HUNGERFORD AND GOLDEN JUBILEE BRIDGES

The Hungerford Bridge is named after the Hungerford Markets that formerly occupied the site now known as Charing Cross station.

The structure was originally a Brunel-designed suspension footbridge that linked the markets with London's Southbank.

In 1859, the original bridge was purchased by the rail company extending the line into Charing Cross and was removed to make way for the much larger structure we see today. 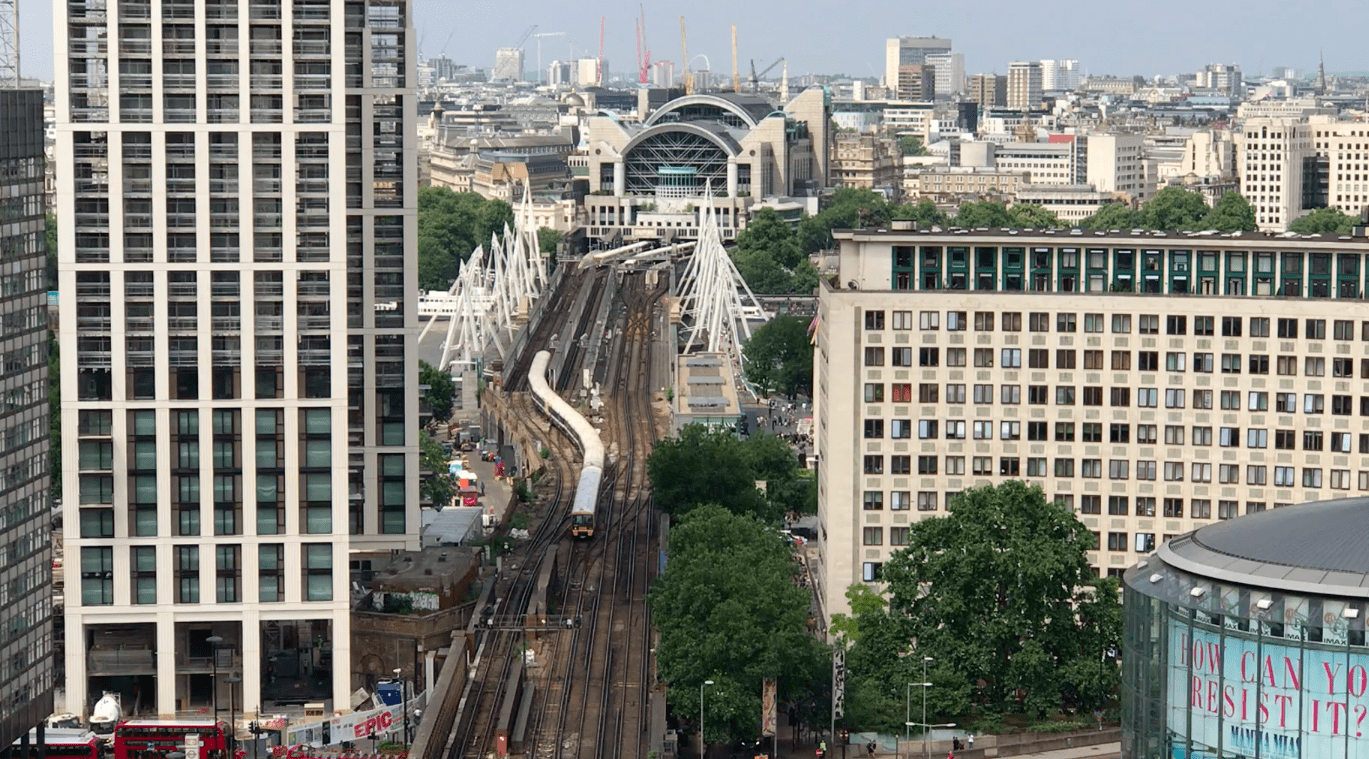 Above: The Hungerford Bridge gets its name from the former Hungerford Markets which occupied the site where Charing Cross now stands (image courtesy of Dan Cortese).

The suspension chains from the original crossing were later re-used in the construction of the Clifton Suspension Bridge in Bristol.

While various pedestrian routes had existed across the Hungerford Bridge for over half a century, they were generally narrow, poorly maintained and often garnered a reputation as an unpleasant way across the river.

Completed in 2002, the Golden Jubilee Bridges were built to replace the unpopular footpaths that preceded them. 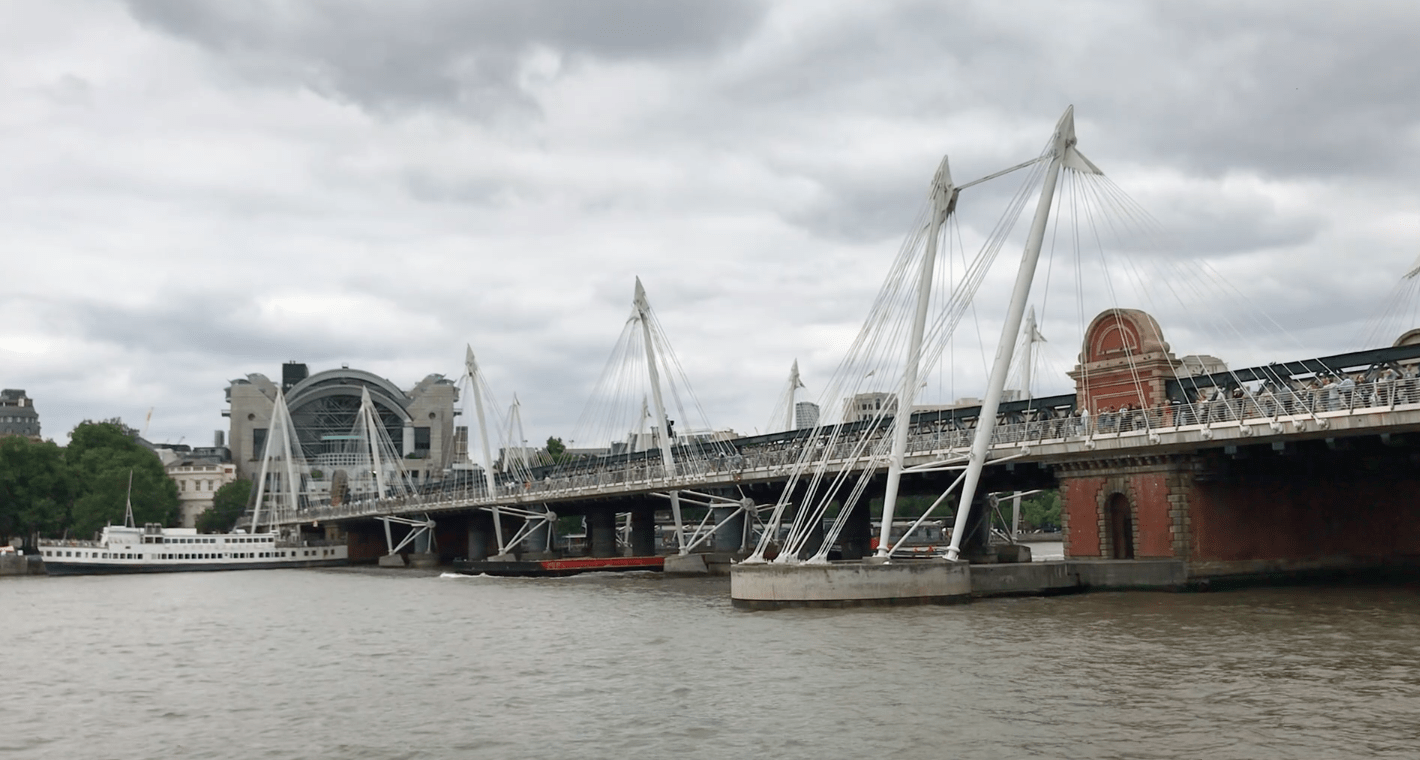 Above: For such seemingly simple structures, the footbridges either side of the Hungerford Bridge were extremely complex to build (image courtesy of Dan Cortese).

With a need to keep the central Hungerford Bridge open during construction works, the proximity of foundations to London’s Bakerloo tube line tunnels and the risk of encountering unexploded Second World War ordnance in the river, the construction of these seemingly simple structures proved extremely complex.

Excavation works could only be carried out when the tube was closed, and for added safety, the foundations were partly dug by hand.

Not to be confused with the neighbouring Blackfriars Bridge which carries pedestrian and road traffic, the original Blackfriars Railway Bridge was completed in 1864.

With most rail services concentrated around Waterloo station by the 1920s, the bridge’s uses severely declined and in 1985 the structure was removed as it had become too weak to support modern trains. 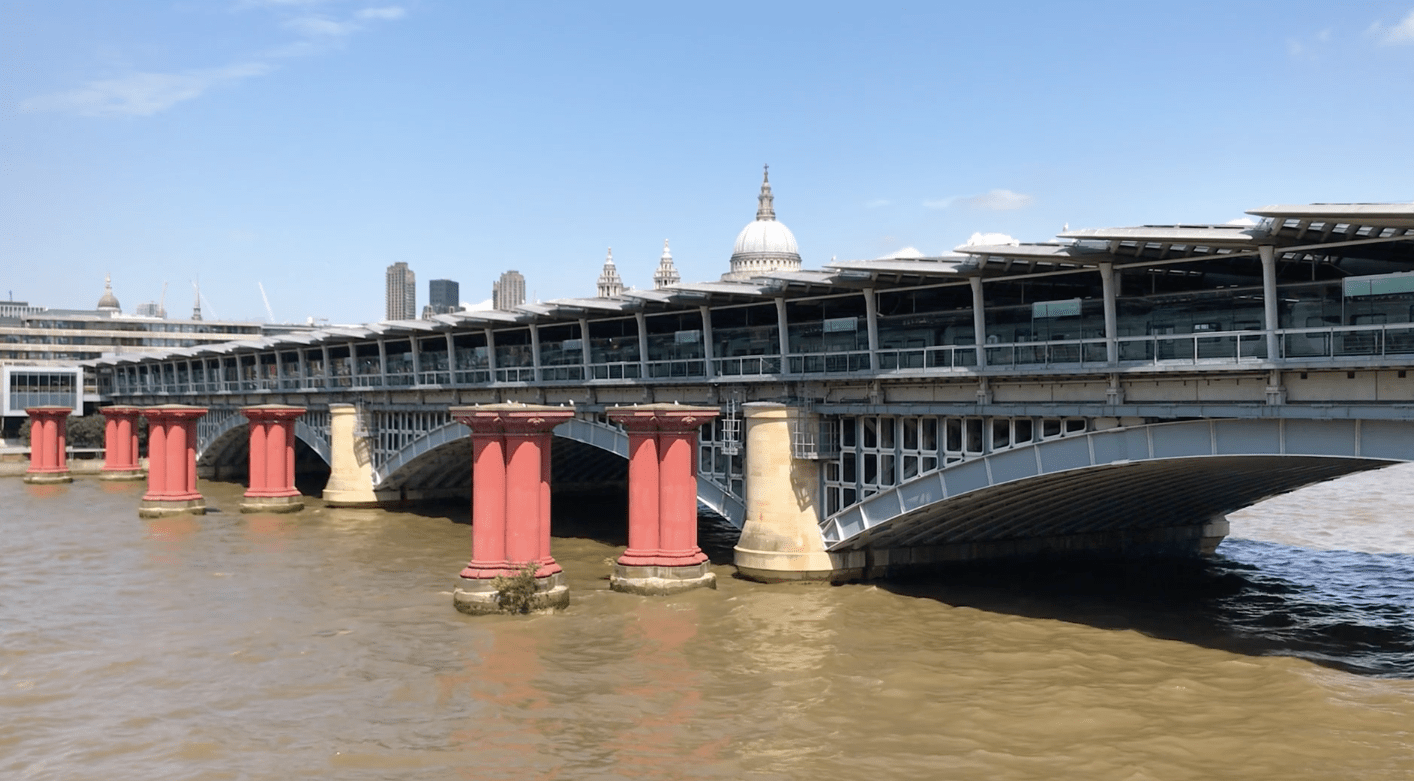 Above: The red pillars of the original Blackfriars Rail Bridge adjacent to the new bridge which carries the Thameslink service ( image courtesy of Dan Cortese).

Today, all that remains of the original bridge are its red support columns standing in the river, together with the southern abutment which is now a Grade II listed structure.

Next-up we have the rather infamous Millennium Footbridge. 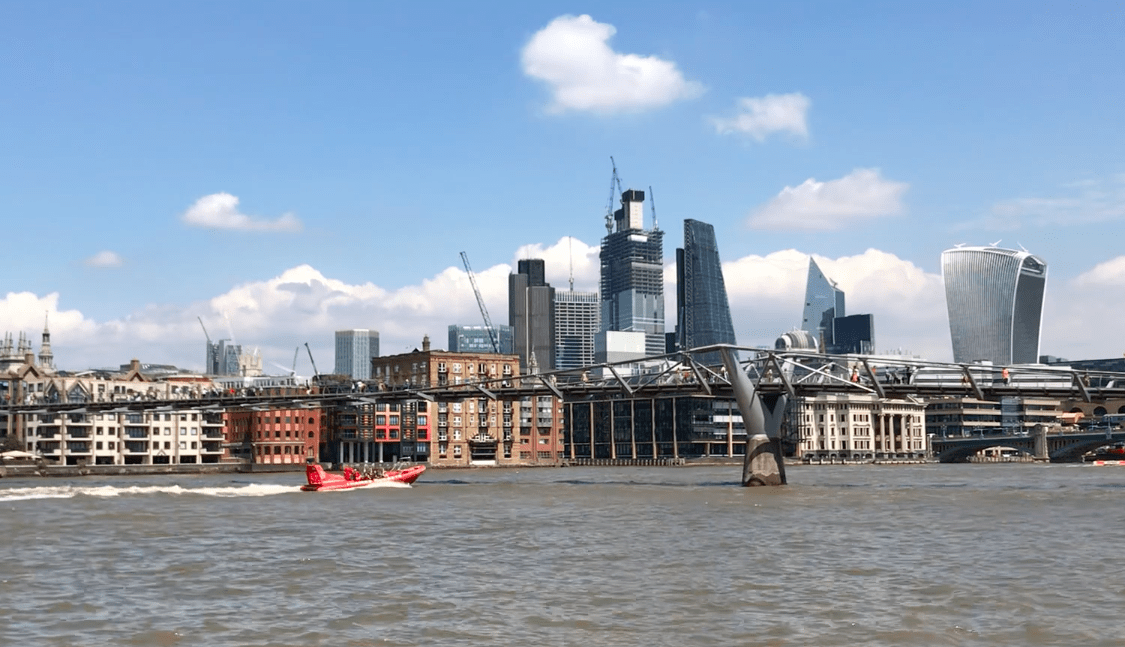 Above: Opening in June 2000, the Millennium Bridge was closed just two days later due to excessive movement (image courtesy of Dan Cortese). 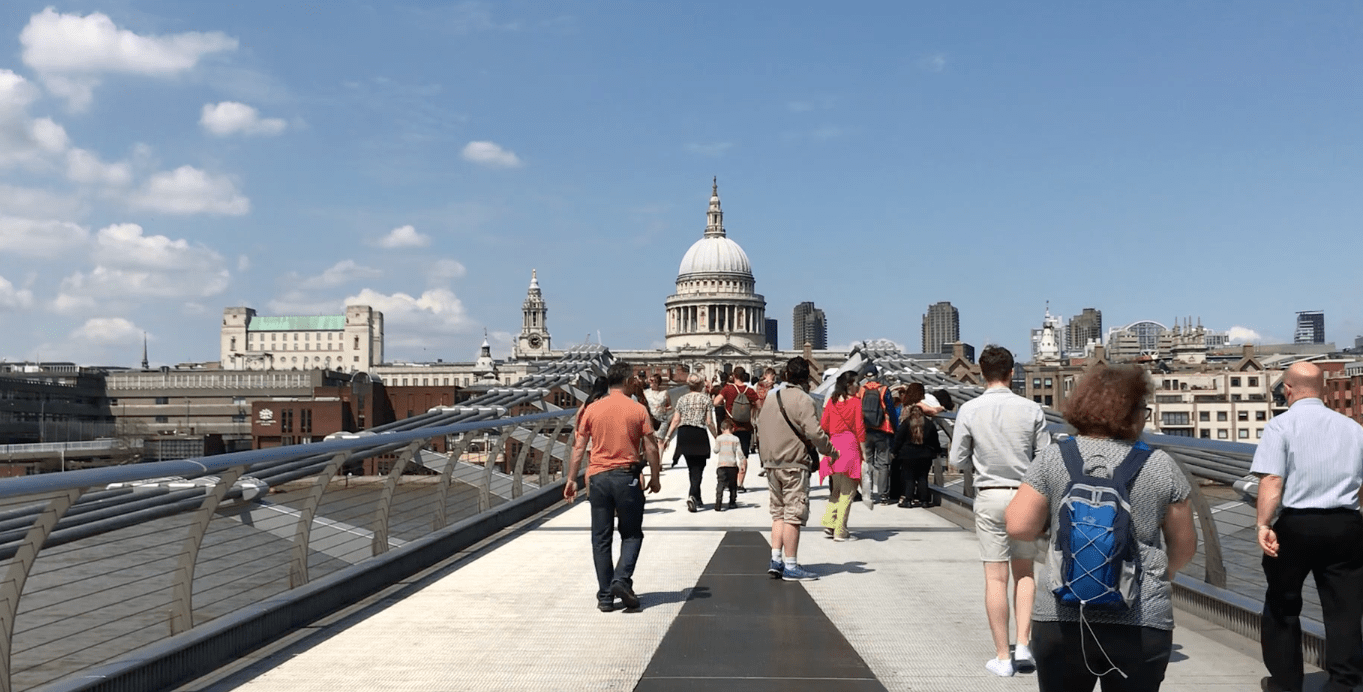 Above: Despite a troubled opening the Millennium Bridge is now a favourite among tourists and locals alike (image courtesy of Dan Cortese).

Re-opening in 2002 the bridge is now a staple for tourists and locals crossing the Thames, offering one of the best views of St Paul’s in London.

While its iconic status often sees it referred to as “London Bridge” (a much more humble structure found half a mile upstream) Tower Bridge gets its name from the nearby Tower of London. 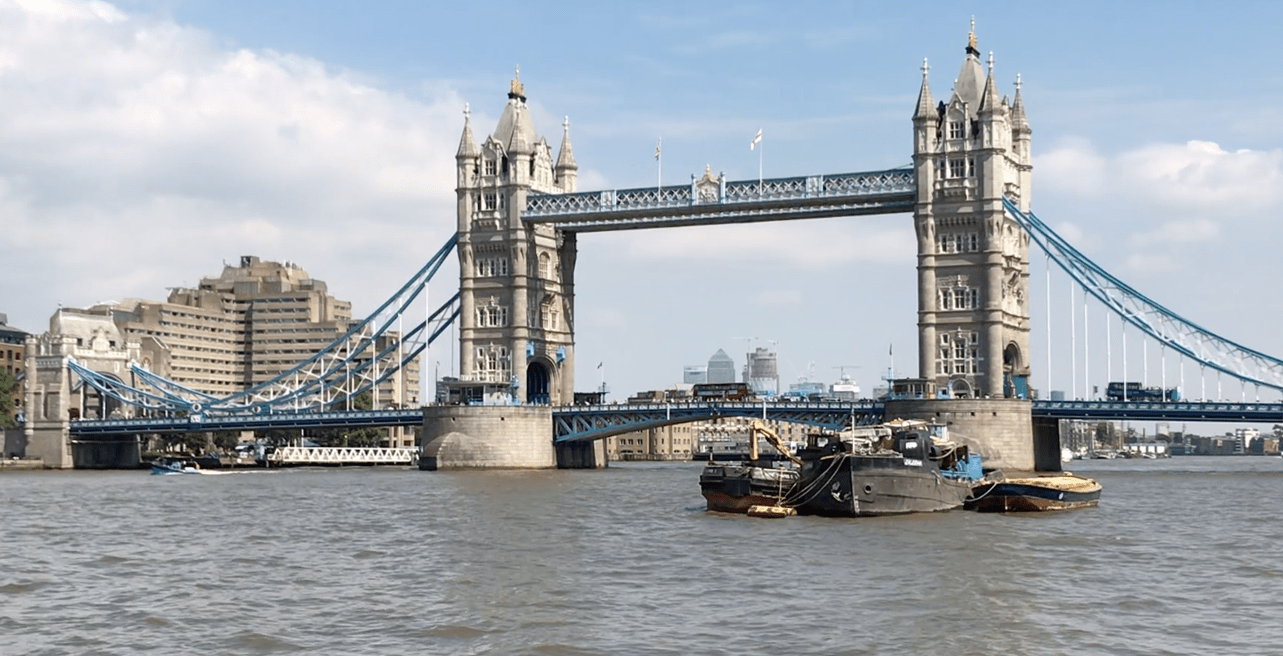 Above: Often mistakenly referred to as "London Bridge", Tower Bridge is named after the nearby Tower of London (image courtesy of Dan Cortese).

The combination suspension and bascule (draw) bridge was built between 1886 and 1894.

It consists of two large towers linked at high level by horizontal walkways. The bascule pivots and operating machinery that raise the central bridge deck allowing ships to pass are housed in the base of each tower.

The Thames Tunnel was a true ground breaker of its time.

Running for some 396 metres (1,300 feet) underneath the Thames at a depth of 23 metres at high tide, this was the first tunnel to be successfully constructed under a navigable river and took almost 20 years to complete, with works running from 1825 to 1843. 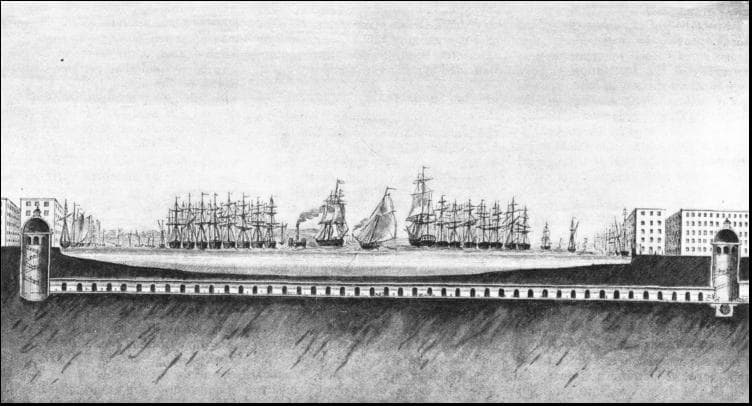 Above: Taking nearly 20 years to complete, the Thames Tunnel was the first to be constructed under a navigable river.

This feat was made possible by the invention of the “tunnelling shield” by Marc Isambard Brunel and Thomas Cochrane. This shield allowed workers to excavate sections of earth behind a protective wall that prevented the unstable ground from collapsing in on them.

As sections were excavated the shield would be inched forward using jacks, allowing the newly exposed section of tunnel to be lined with bricks.

While it was originally intended for horse drawn carriages, the tunnel was never actually used for this purpose and operated as a pedestrian route until 1865 when it was converted into a rail tunnel.

Today it serves as part of Transport for London’s overground network.

Moving out into the docklands, we come to one of the narrowest crossings anywhere along the river.

At just 2.7 meters (9 feet) in diameter, the Greenwich Foot tunnel is a pedestrian only path beneath the Thames that connects Greenwich with the Isle of Dogs. 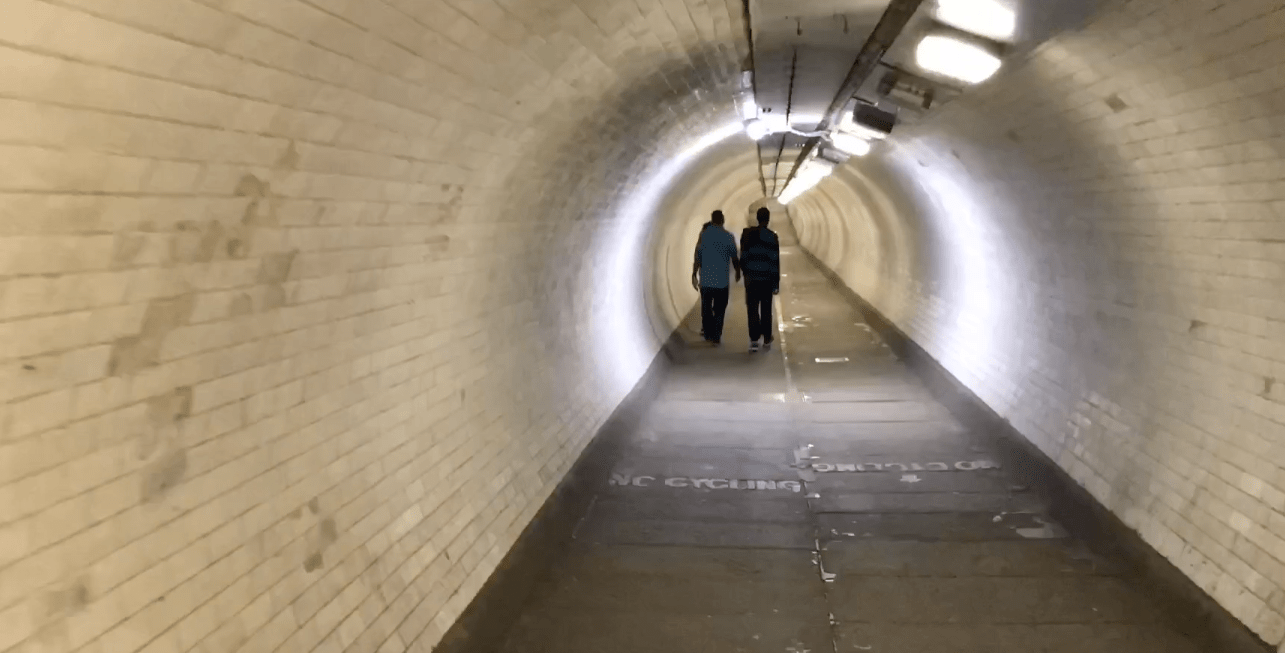 Above: The Greenwich Foot Tunnel is among the narrowest of all the Thames crossings (image courtesy of Dan Cortese).

Opened in 1902 and running for 370 metres (1,215 feet), the tunnel forms part of the United Kingdom's National Cycle Route 1, linking Inverness in Scotland all the way to Dover on the south coast of England.

Despite its significance on the cycle route, riders are required to dismount through the tunnel.

Our next crossing is quite literally in a league of its own. Opened just ahead of the London Olympic Games in 2012, the Emirates Air Line was the first urban cable car built in the United Kingdom. 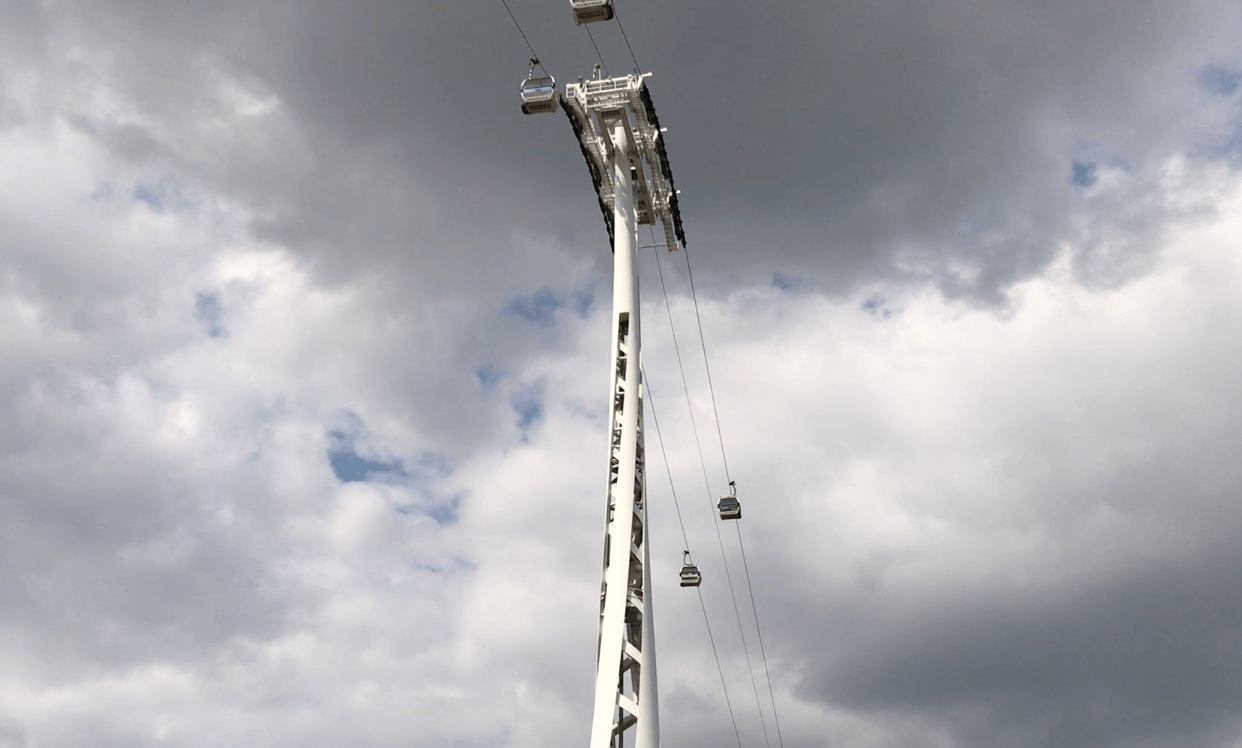 Above: Rising as high as 90 metres above the Thames, the Emirates Air Line offers passengers a truly unique view of London ( image courtesy of Dan Cortese).

It not only offers tourists a unique view of the city, but it is an official part of the Transport for London network, linking the Greenwich peninsula south of the Thames to the Royal Victoria Docks and the Docklands Light Railway (DLR) on the north bank.

During the Olympics, the Air Line provided a useful link between the O2 and ExCel Arenas which were both hosting events.

Located just outside of London, the final stop on our journey down the Thames is the heavily utilised Dartford Crossing.

In fact consisting of three parts, the crossing includes two tunnels and the impressive Queen Elizabeth II Bridge, linking Thurrock in Essex with Dartford in Kent. 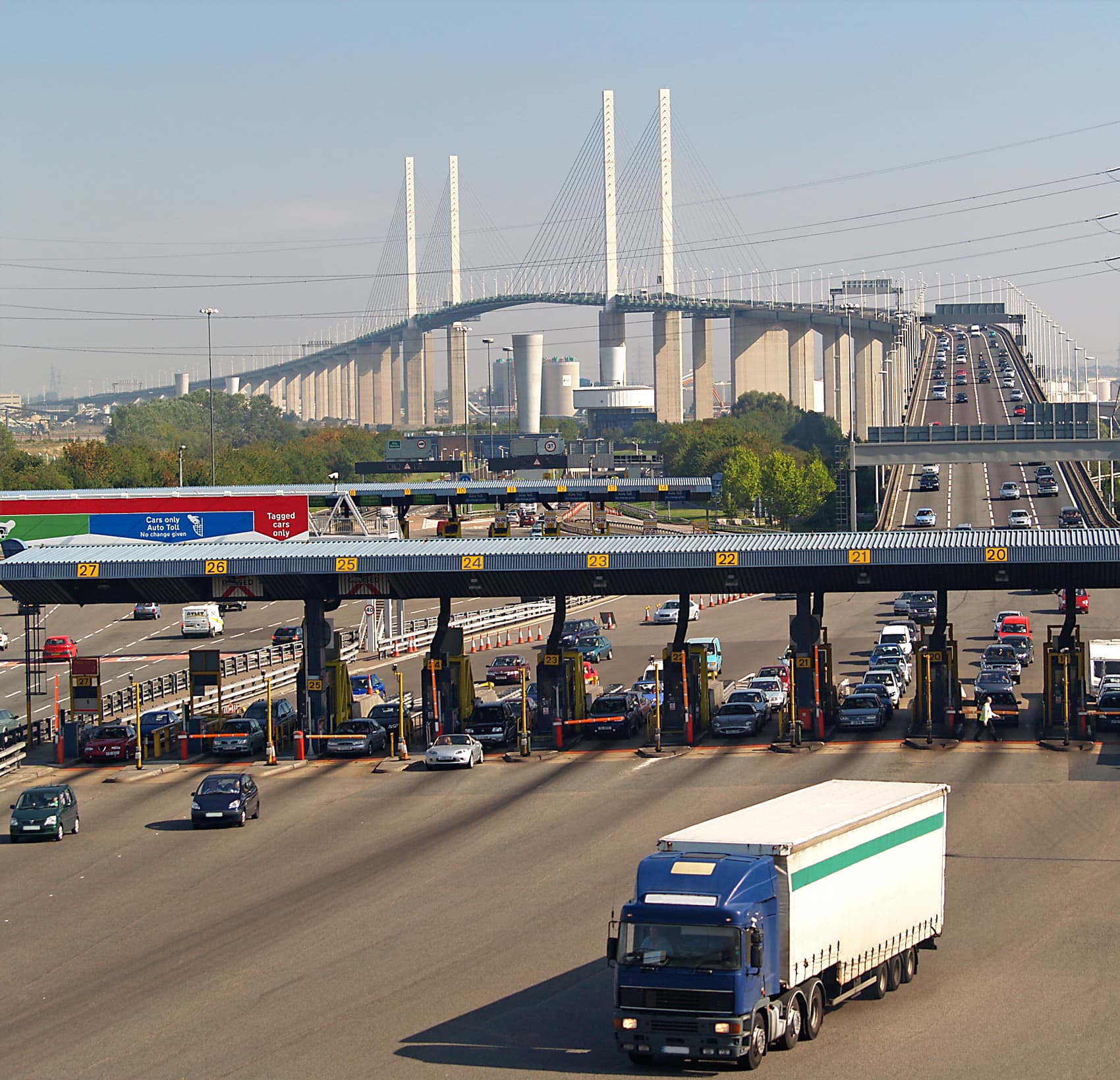 Above: Comprising two tunnels and the Queen Elizabeth II Bridge is one of the busiest road crossings in Europe.

Opened in three stages between 1963 and 1991, the first tunnel at the crossing consisted of just one lane of traffic in each direction.

Rapid growth in the area led to a second tunnel being constructed in 1980, doubling capacity with two lanes flowing north and south.

Finally, following the completion of the M25 motorway in 1986, the Queen Elizabeth II bridge was built to further increase capacity.

The bridge’s four supporting pylons stand 137 metres high and suspend a roadway some 61 metres (200 feet) above the surface of the river. With a main span of 450 metres (1,480 feet) the Queen Elizabeth II Bridge was the longest cable-stayed bridge in Europe when it completed in 1991.

Today, the Dartford Crossing consists of four lanes of southbound traffic crossing the bridge, while all northbound traffic travels through the two tunnels. It remains one of the busiest river crossings in Europe with over 160,000 vehicles using the route every day.