TURKEY has a new bridge and it’s big – we mean really big. It’s the longest suspension bridge in the world, spanning 4.6 kilometres across the Dardanelles strait.

If you put it in London it would dominate the skyline and rise higher than the Shard, the tallest building in Western Europe.

This remarkable feat of engineering quite literally connects Europe to Asia and crosses one of the most important and busiest trade routes in the world.

But constructing it wasn’t easy, the $2.8BN megaproject had to withstand earthquakes, storms … and politics.

Above: Once completed the bridge become the longest suspension bridge in the world. Image courtesy of Raducu P Drum.

Turkey’s President Tayyip Erdoğan opened the 1915Çanakkale Bridge. It had finished 18 months ahead of schedule but had been a long time coming.

The Dardanelles strait has always been a critical piece of Turkey’s geography. It’s a narrow stretch of water that averages just four kilometres wide and is vital in connecting the Mediterranean to the Black Sea, giving some of the most resource-rich countries access to the outside world. 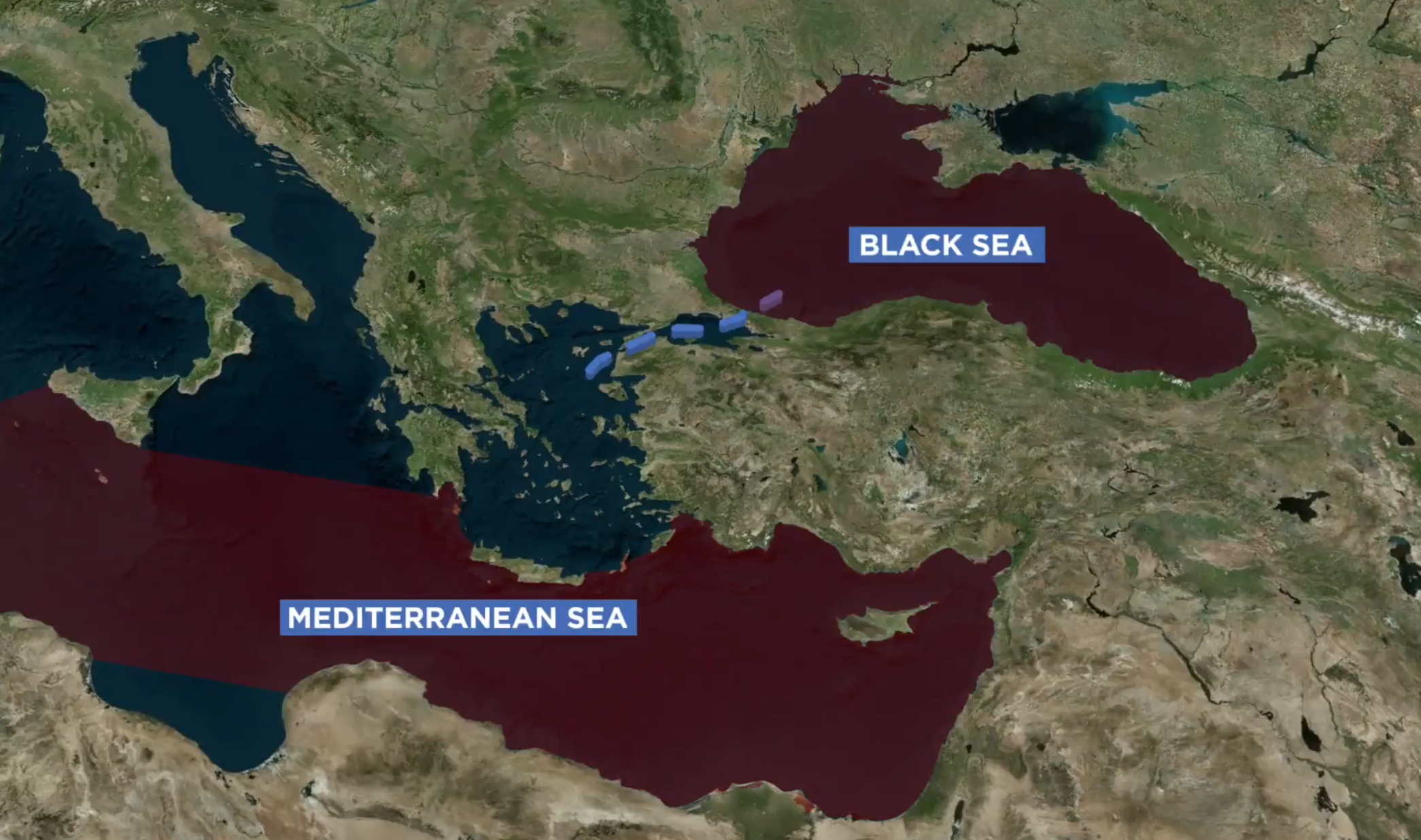 Above: The Dardanelles is a crucial piece of Turkey's geography.

The strait, along with the Bospherous, also represents the effective border between Europe and Asia. Before the Çanakkale was built there were only three bridges and two tunnels linking the continents at this point – all located in Istanbul.

As you might imagine, that caused plenty of congestion. A crossing over the Dardanelles to solve the traffic problem was first pitched way back in 1989.

Famed bridge designer William Brown was even commissioned to design a structure following the success of his Second Bosphorus Bridge in Istanbul in 1988. But the plans stalled. In 1995 the project was declared unfeasible and it was more than two decades before another idea was put forward.

This time around, the funds were secured and engineering technology had progressed by 20 years. It was time to make history.

How the bridge was built

Given the size of some ships using the strait, engineers opted for a suspension bridge design.

Two enormous 318-metre high towers were planned on either end of the strait, supporting the two kilometre main span between them, the longest of its kind in the world.

Above: The bridge's foundations had to be earthquake-proof.

A pair of 59,000-tonne caissons were submerged some 40 metres below the surface, one on the European side and one on the Asian side of the water. They would act as the towers’ waterproof foundations.

The caissons were reinforced with steel piles to help improve their ability to withstand earthquakes. Additional steel platforms were then attached so that the towers could be mounted above sea level.

The Turkish government wanted the bridge to be opened in time for the country’s centennial in 2023 – and that put a strict deadline on every element of construction.

For speed, a modular solution was proposed for building the towers. They’d be prefabricated offsite, transported to the strait and then assembled.

Above: The bridge dominates its surroundings, rising higher than the tallest building in Wester Europe. Image courtesy of Raducu P Drum.

Once the towers were finished, the cables between them were strung strand by strand in a process that took more than 162,000 kilometres worth of wire, enough to loop around the globe four times.

The main deck was then suspended from the cables an incredible 72-metres clear of the water. The strait is notorious for strong winds and large annual storms so the deck was built with a twin box girder structure with a nine metre gap in between. That helps wind to pass through the bridge more easily and improves its stability.

Now complete, some 45,000 vehicles are expected to cross the bridge every day. It has transformed a ferry journey that at its worst could take upwards of five hours to a mere six minute drive.

Despite its $2.8BN cost, the crossing is projected to add $5.7BN to the economy.

It’s actually all part of a wider infrastructure blitz that President Erdoğan has spearheaded across the nation - including a new airport in Istanbul, rail and road tunnels beneath the Bosphorus, and most ambitiously of all a proposed $15BN canal in Istanbul that would effectively turn the city into an island. 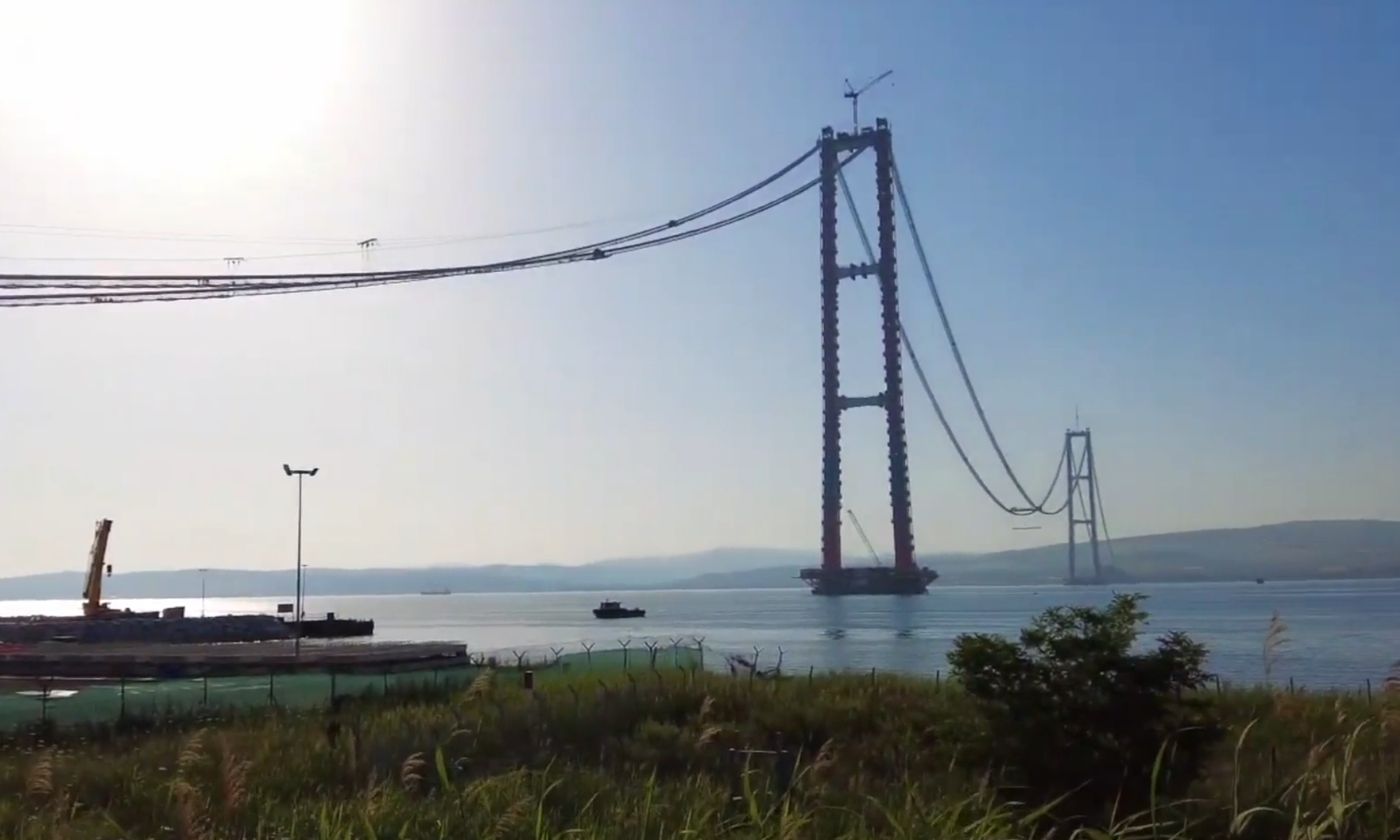 It’s fair to say that Erdoğan has had his share of criticism for these infrastructure plans: opposition leaders call the megaprojects nothing but distractions ahead of the country’s 2023 election.

As if its record breaking engineering weren’t enough, there’s more to the 1915Çanakkale Bridge than ridiculous amounts of steel and a big span.

Firstly, the whole project is wrapped up in national symbolism. Painted in the colours of the Turkish flag, its 2,023 metre midspan is an allusion to the Turkish Republic's 100th anniversary in 2023, and the name of the bridge refers to a World War I battle fought on this very site.

But it’s the contrast with war that is perhaps its most impressive trait.

The bridge was assembled by an international team from all corners of the globe: cranes were shipped from Australia, designs were drawn up in Denmark, and finance came from South Korea – all to build a bridge in Turkey that connects Asia and Europe. A hundred years ago many of these countries were at war with each other, fighting on the very shores the bridge is now built on.

The world’s new longest suspension bridge is a testament not just to engineering, but to what can be accomplished when nations combine their talents. At a time of such uncertainty and conflict, this structure reminds us not just of the power of construction but of what we can achieve on this planet when we work together.