LOS ANGELES' Sixth Street viaduct is one of the most well-known bridges in the United States (US).

Made famous by appearances in countless movies, TV shows, commercials and music videos, the 1,066 metre-long structure was an engineering marvel when first constructed in 1932. 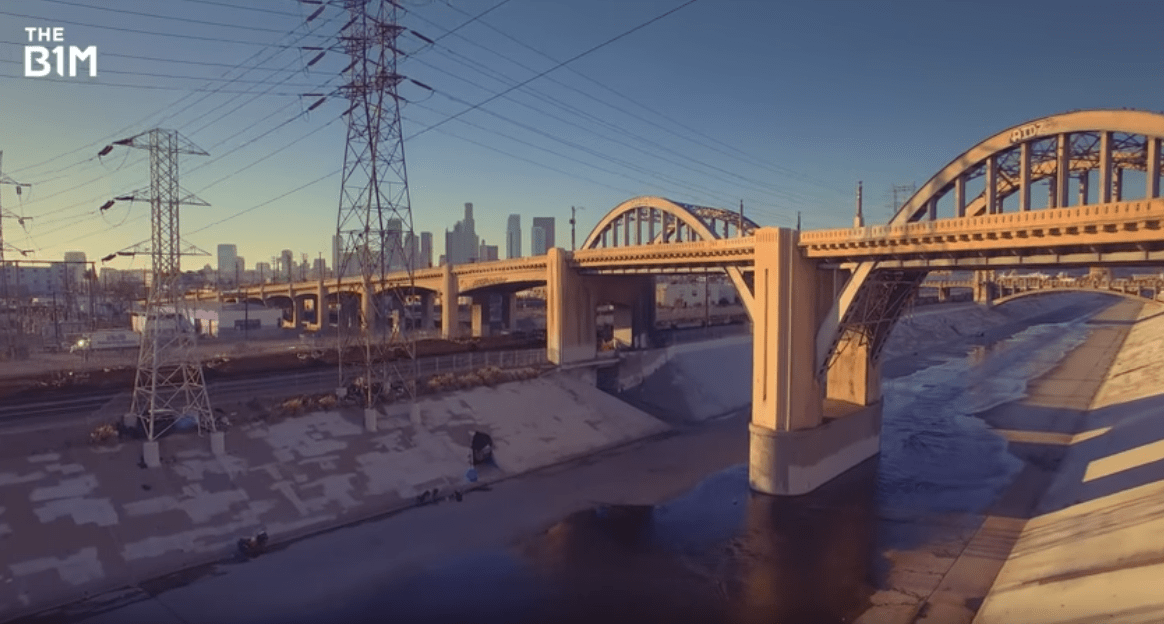 Above: The iconic Sixth Street viaduct in Los Angeles before its demolition in 2016.

Making use of an on-site plant to produce concrete during construction, it was later discovered that the concrete developed had a high alkali content. This lead to alkali-silica reactions taking place and cracks forming throughout the structure.

Though the bridge underwent numerous costly restoration attempts over the years, no permanent solution to its problems was ever found.

In 2004 a study of the structure revealed that it was seismically unstable and had a 70% chance of collapse during an earthquake in the next 50 years. 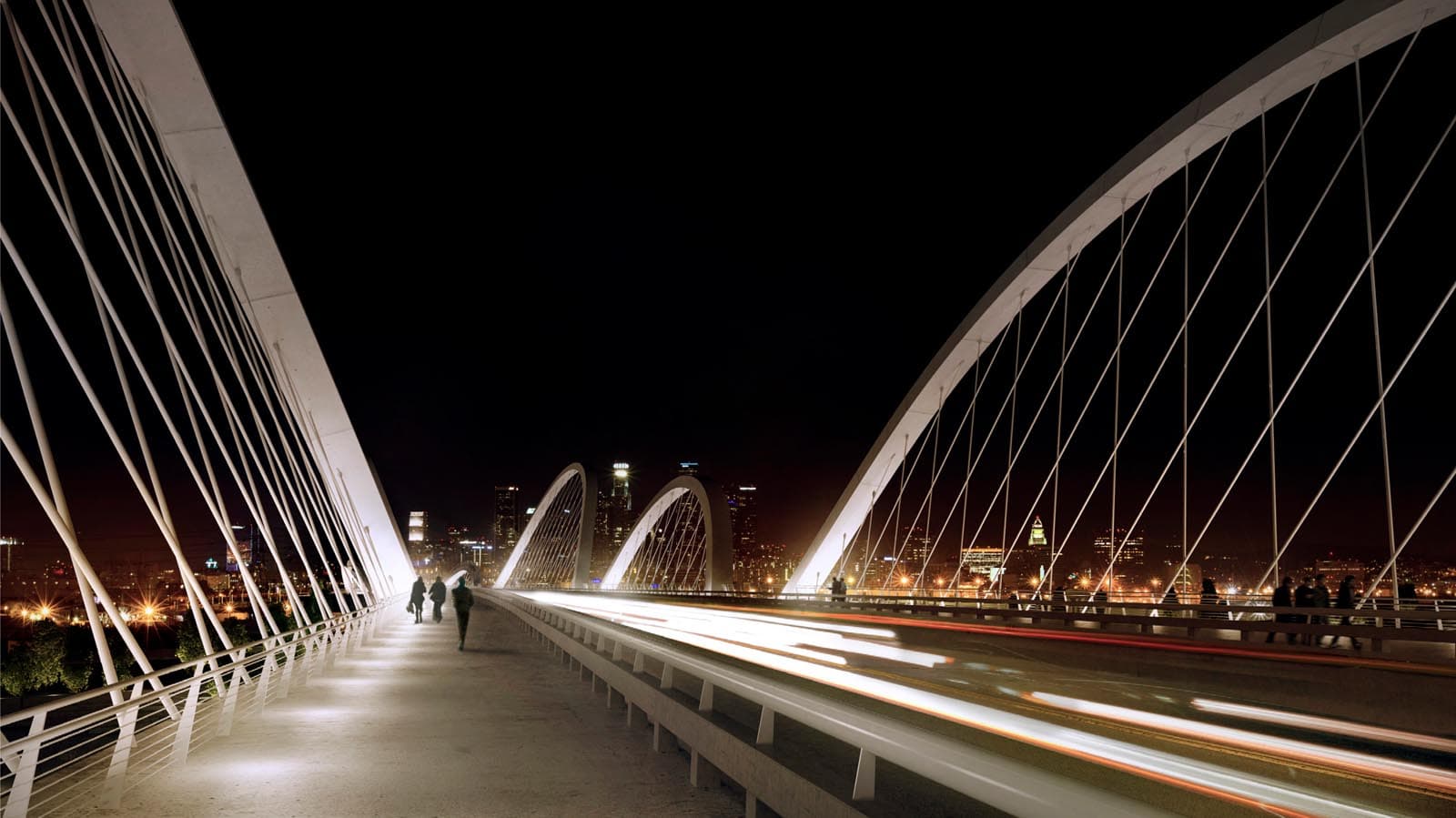 Above: The replacement for the Sixth Street viaduct will be as iconic as the original (image courtesy of Michael Maltzan Architecture).

With the bridge spanning the Los Angeles River, the 101 Freeway, the I-5, and numerous rail yards and local streets, Los Angeles’ authorities had no choice but to mark the historic structure for demolition and replace it with a bridge that could stand for 100 years in the face of the city's strongest earthquakes.

After an international design competition in 2012, Michael Maltzan Architecture’s design dubbed the “Ribbon of Light” was chosen to replace the Sixth Street viaduct structure. 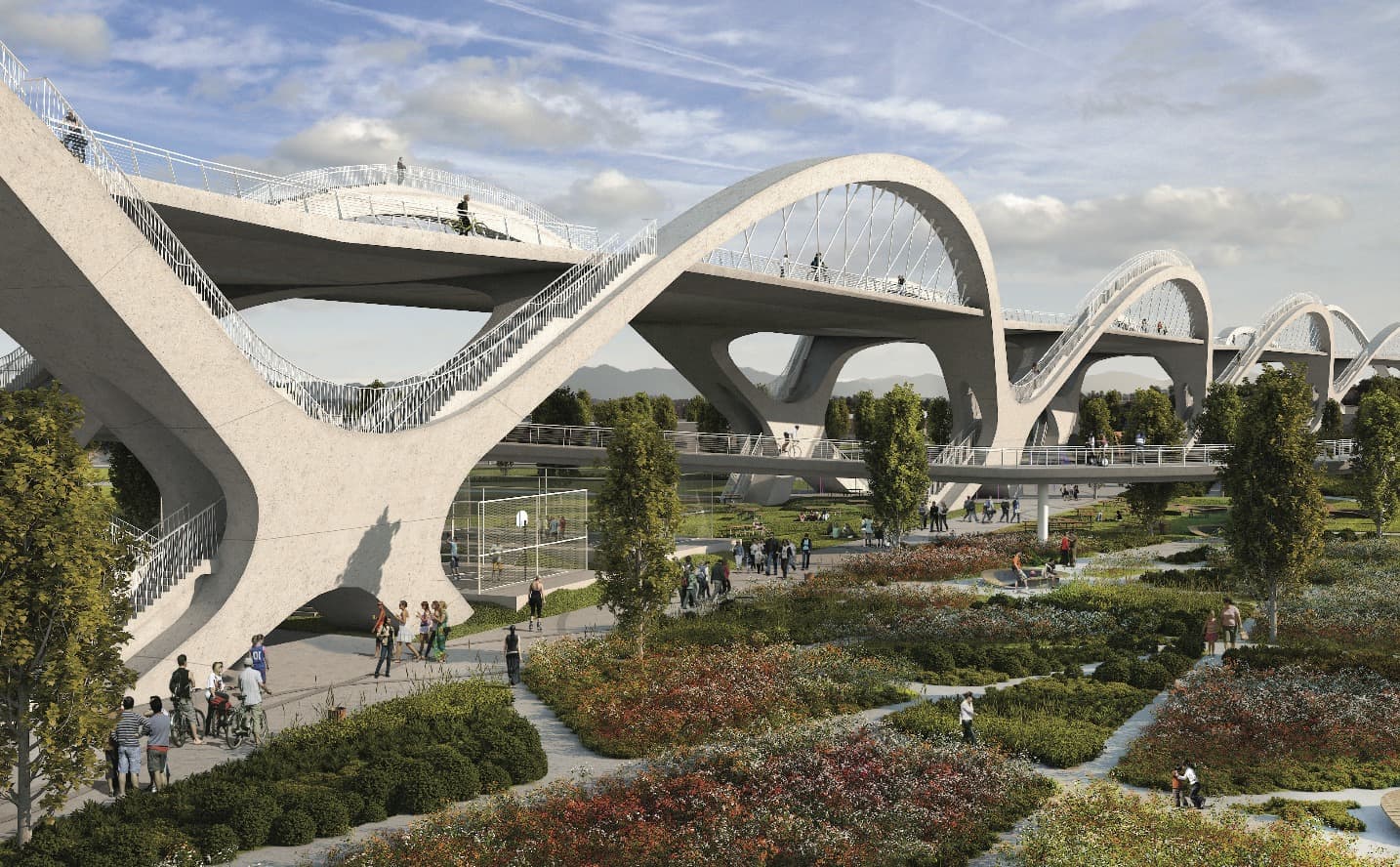 Above: The new structure will create space for community facilities below (image courtesy of Michael Maltzan Architecture).

This reduces the number of points that can be damaged in the event of an earthquake and opens-up development opportunities beneath the bridge.

Work to demolish the existing viaduct began in February 2016 and an estimated 37,000 cubic metres of concrete and 4,200 tonnes of steel were removed over the following nine months.

With the original structure removed, work began on the new bridge and, in December 2017, erection of the falsework that will support the new structure during its construction commenced.

To support the arches and create the bridge’s unique “Y Bents”, prefabricated falsework is being trucked in from as far away as Indiana and Toronto. 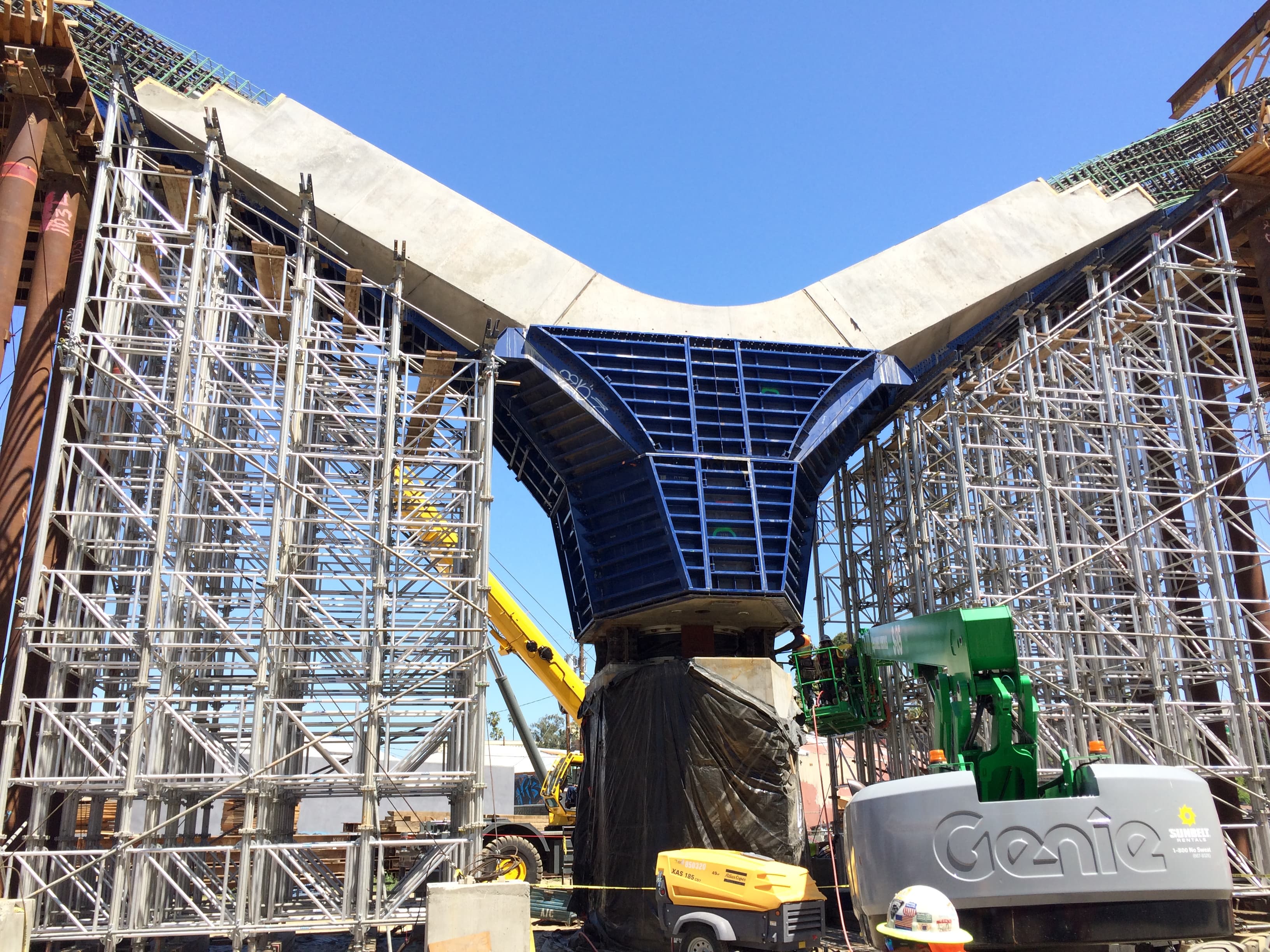 Above: Formwork for the new bridge was shipped from across North America (image courtesy of City of Los Angeles Bureau of Engineering).

As concrete gives off heat as it cures, liquid nitrogen is poured into the concrete mixers during the summer months to control the temperature of the mix and prevent it from curing too quickly in the Los Angeles heat, which could lead to cracks forming on the finished structure. 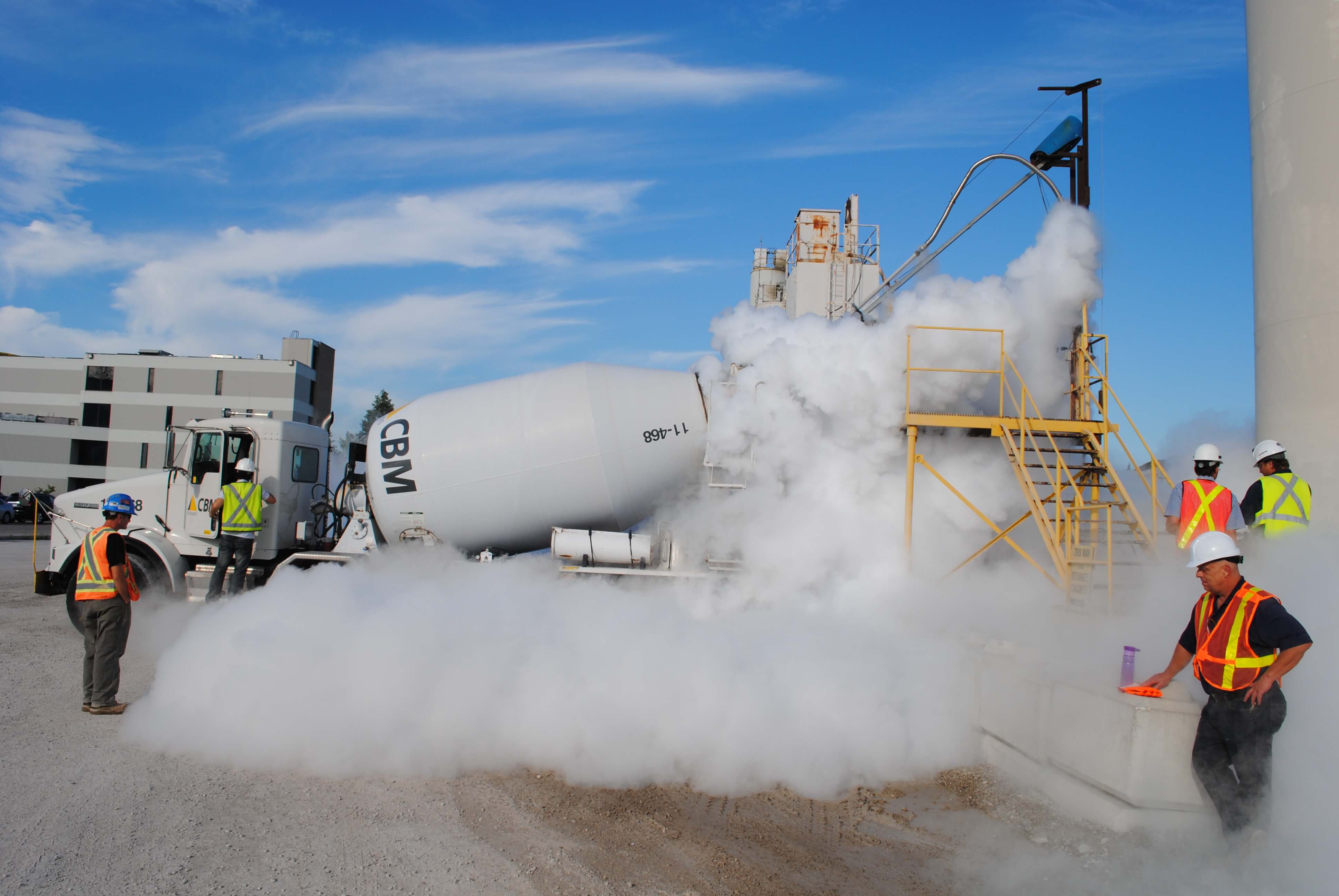 Above: Liquid nitrogen was used to control the temperature of the concrete in Los Angeles' hot summer (image courtesy of City of Los Angeles Bureau of Engineering).

With the arch structures complete, the new road deck will be suspended by cables from these concrete structures.

With Los Angeles located in an area of high seismic activity, the city has developed some of the world’s most stringent building codes.

To ensure that the new bridge remains standing in the event of a severe earthquake, engineers have worked to exceed the latest seismic safety codes. 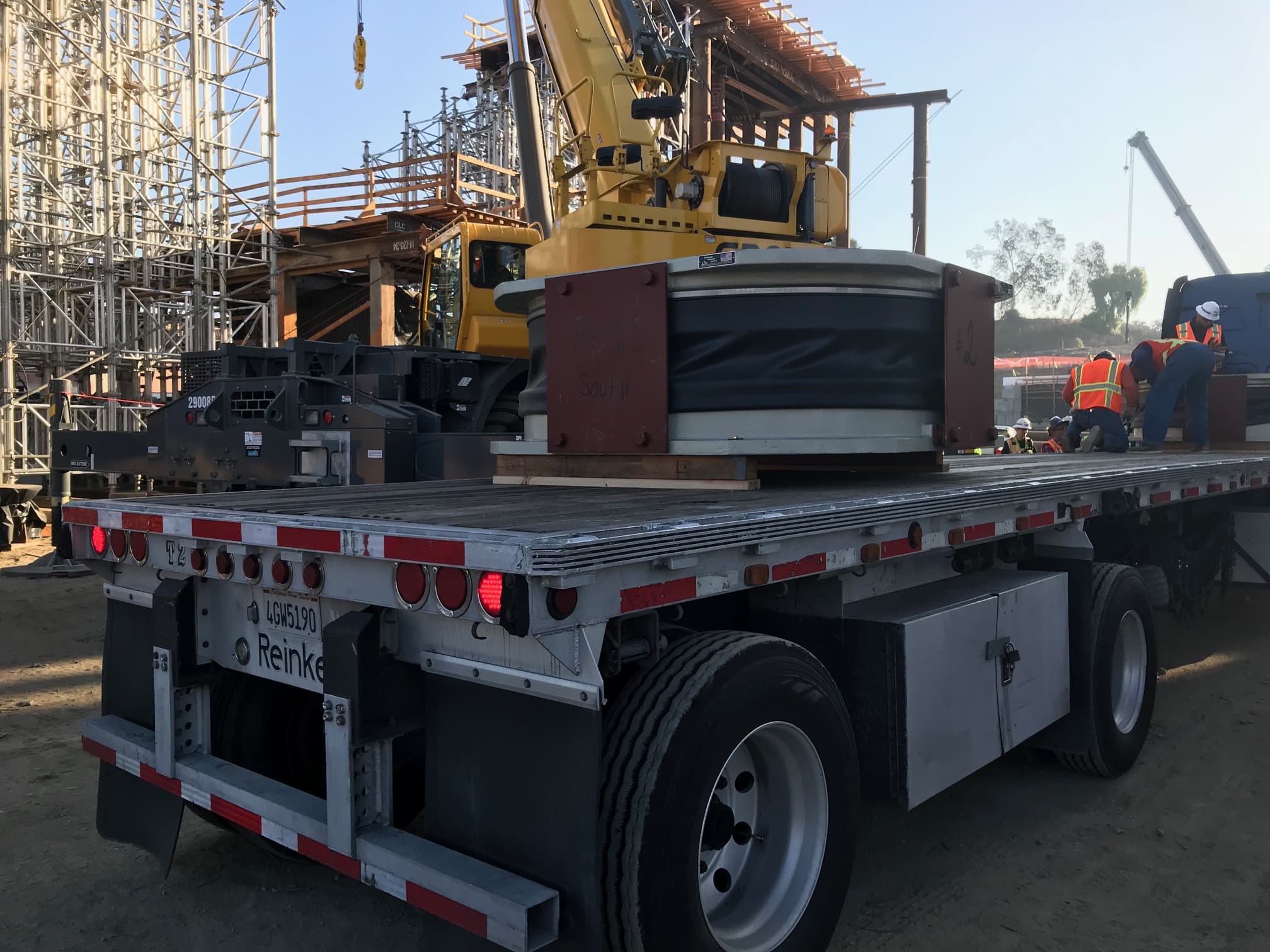 Above: Delivery of the seismic isolation bearing for installation on the new bridge (image courtesy of City of Los Angeles Bureau of Engineering).

Along with its deep foundations and reinforced concrete arch design, the columns of the bridge have been fitted with seismic isolation bearings at their midpoints.

The design of these bearings consists of three main parts, with each element able to separate and break free from the other once certain thresholds are reached.

These bearings allow each of the columns of the bridge to move up to 76cm (30 inches) during an earthquake event, with the bearings – rather than the bridge – absorbing the majority of the quake’s energy. 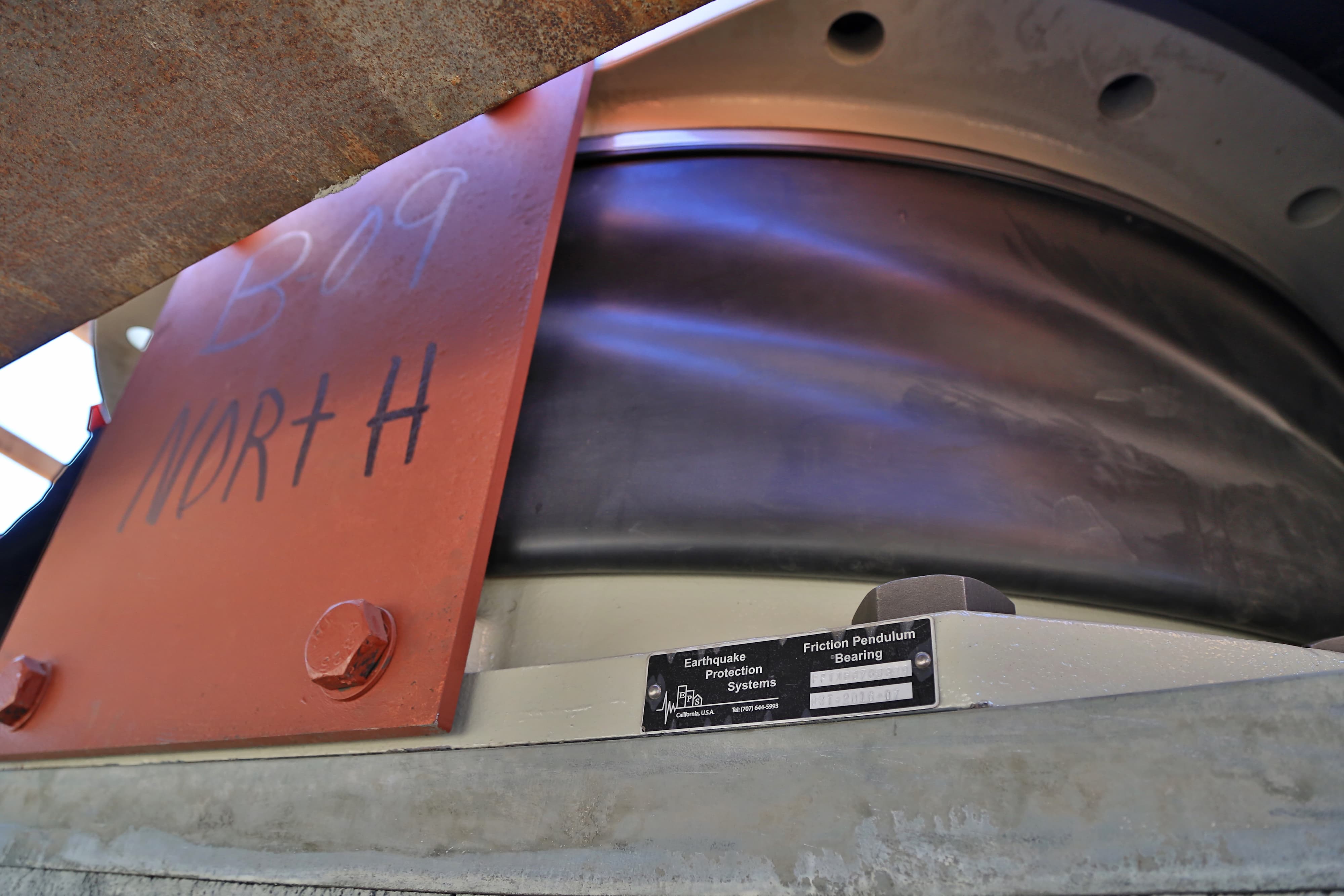 Above: 26 seismic isolation bearings will allow the Sixth Street Bridge to resist much of the destructive force of California's earthquakes  (image courtesy of City of Los Angeles Bureau of Engineering).

When the shaking stops, the internal concave shape of the bearings allow them to re-centre themselves and return to the shallowest point within the bearing.

By fitting the bridge with 26 of these isolation bearings – most of which have a diameter of over 2 metres (around 6.5 feet) – the bridge should be able to provide a high level of protection during a seismic event. 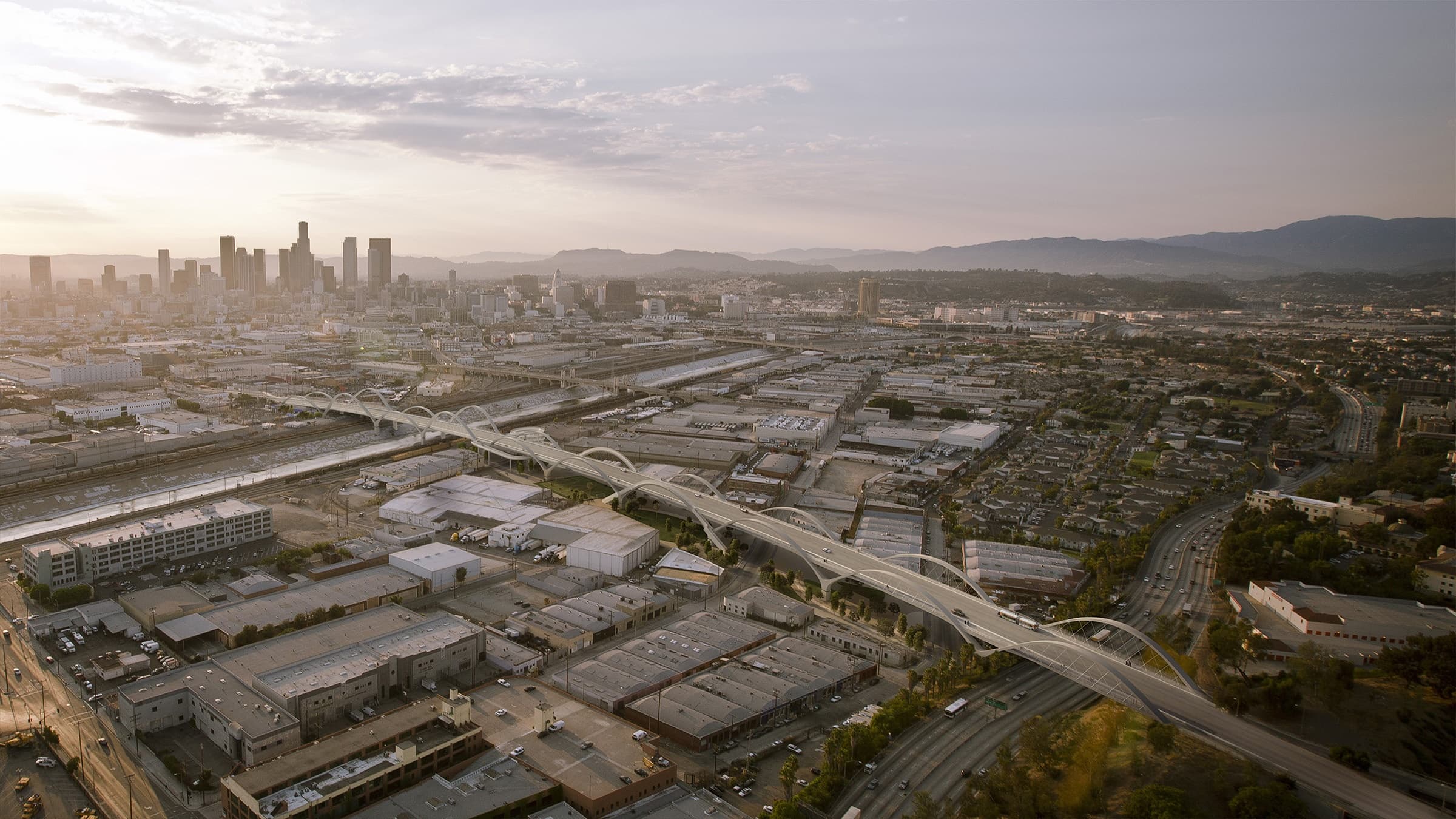 Above: When complete in 2020 the new bridge will be a new icon for Los Angeles (image courtesy of Michael Maltzan Architecture).

When complete in 2020, the new Sixth Street viaduct will serve as a vital link in Los Angeles’ vast road network while opening-up a large area beneath its structure to the wider community, where 12 acres of new parkland, art installations, and other community facilities are planned to reinvigorate the space.

At a cost of USD $428M, the largest bridge project in the city's history, and with its impressive architectural design that nods to the past whilst insulating the structure against seismic threats in the future, the new viaduct is firmly on its way to becoming an icon of Los Angeles.