WHEN you think of supply chain issues, you might picture busy ports in California or the Ever Given wedged in the Suez Canal. But a major bottleneck in the supply chain actually sits at the border between the US and Canada.

The bridges that connect Windsor and Detroit are some of the most important pieces of infrastructure in the region. They’re so important that there’s been a kind of competition underway to build the best one.

The newest bridge on the block is the Gordie Howe International. Pushing the bounds of engineering, it’s set to become the longest cable-stayed bridge in North America.

But this is more than just a crossing. It’s also a business opportunity, because yes, bridges can make money. And there’s a lot of money to be made here.

The US and Canada have the largest trading relationship in the world. In 2021, Canada overtook China as the US’ top trading partner, exchanging $664BN worth of goods.

Nearly a quarter of that trade happens between Detroit and Windsor. Every day more than $300 million worth of goods, including vehicles, auto parts, cosmetics, even blood, travel between the two cities.

That means a lot of taxes and tolls are being paid on bridges like this. In genereal, toll revenue often goes towards paying back the cost of construction and maintaining the structure.

But while most toll bridges were taken over by state highway departments in the 20th century, there are still a handful of toll bridges owned by private companies. The 92-year old Ambassador Bridge, just a couple miles away from the new Gordie Howe Bridge, is one of them. 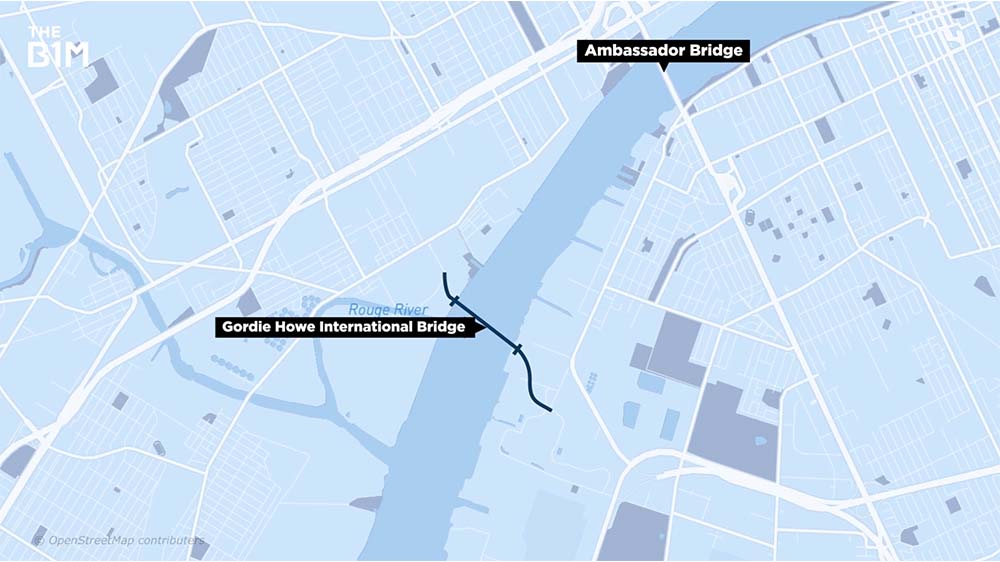 Above: The new Gordie Howe International Bridge is being built across the Detroit River, near the existing Ambassador Bridge.

The Ambassador Bridge has been privately run since 1929, and was taken over by billionaire Manuel "Matty" Moroun in the late 70s.

Today some trucks pay $45 just to cross it. In 2021, an average of 263 trucks crossed the four-lane bridge every hour. On particularly busy days, it’s more like 500 trucks an hour, according to Reuters.

All of that traffic is good for business, but not so much for travel time. So, a new bridge is being built across the same corridor.

Originally proposed nearly two decades ago, the Gordie Howe International Bridge will provide an alternative to the overcrowded Ambassador Bridge. And getting it built is a massive undertaking.

The project is divided up into four main components: roadwork at a new interchange in Michigan, the US point of entry, the Canadian port of entry, and of course the bridge itself.

Once complete it’ll be the longest cable-stayed bridge in North America, stretching 853 metres across the Detroit River. The $5.4BN project is expected to finish in 2024. But it hasn’t been an easy path to get here. 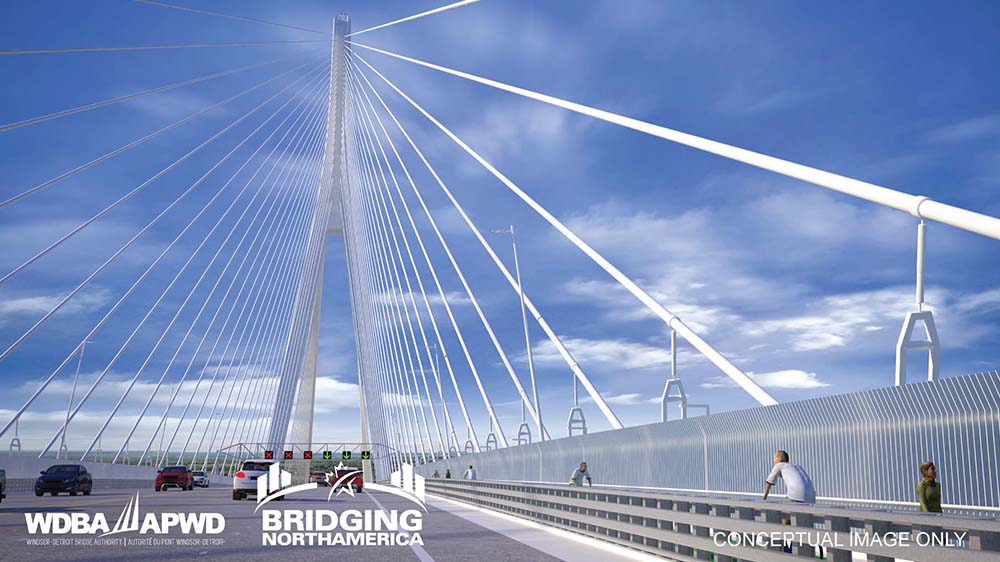 Battle of the bridges

Remember Manuel Moroun, the guy who owned the Ambassador Bridge? Well, he also owned the duty free shops at the end of the bridge and tunnels – because why not own it all?

Moroun made a lot of money off this trade corridor, and he didn’t want someone else taking potential traffic away from his empire. So when a new bridge was proposed back in 2004, he did everything he could to stop it.

He sued the governments of Canada and Michigan to try and block its construction.

Instead of a new publicly owned bridge, he proposed building a second stretch of the Ambassador Bridge, which he would own.

He spent millions of dollars trying to pass a ballot measure that would make it harder to get the bridge approved, but the measure didn’t pass.

He even ran a cable TV advert asking then-President Trump to block its construction.

After nearly two decades of battles, Moroun’s efforts failed, and construction began in 2018. The next year, Trump allocated $15 million in federal funds for the Gordie Howe bridge.

For all the time and effort that went into the political fight, the engineering challenge of actually building the Gordie Howe Bridge still lay ahead.

The structure will be held up by a series of cables fanning out directly from two main towers, which will bear the weight of the road. That’s different from a suspension bridge, where the cables spread out across a suspender between the towers. 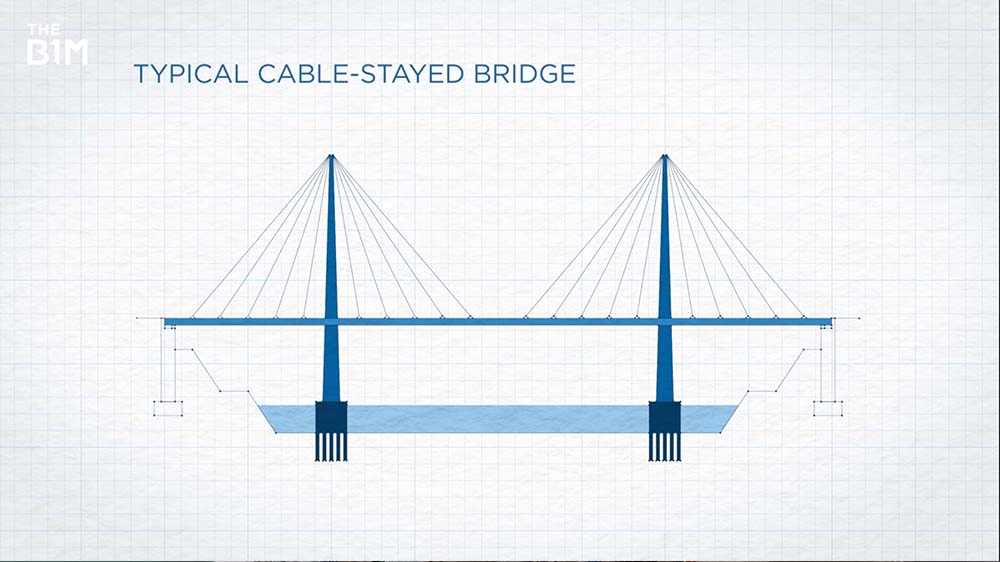 Above: A representation of a typical cable-stayed bridge.

For a while, suspension bridges were the go-to choice for mid-length crossings in America — think the Golden Gate or George Washington Bridge. But as cable-stayed bridge design became cheaper, quicker and more efficient, it began to make a comeback.

The Gordie Howe bridge will be anchored by two massive towers on opposite sides of the Detroit River.

Soaring 220 metres in the air, the towers are designed to resemble the curvature of an ice hockey stick. It’s fitting, given this is Canada, and the bridge is named after a legendary hockey player.

The main section of the bridge will be built over the water using something called the unbalanced cantilever method.

Starting from the towers on the shore, segments of the bridge will be added on one at a time until they meet in the middle. At the edge of the road, a crane will place steel girders and floor beams to form the base of the road.

Then pre-cast concrete slabs are added, and fresh concrete is poured on top to fuse them together. Finally, a crane will lift the cables from the road deck and secure them to the top of the tower. That process is repeated until both sides connect in the middle.

Each section can take up to 12 days to install, and everything can be transported over the bridge itself, so there’s no need to move anything through the water below. 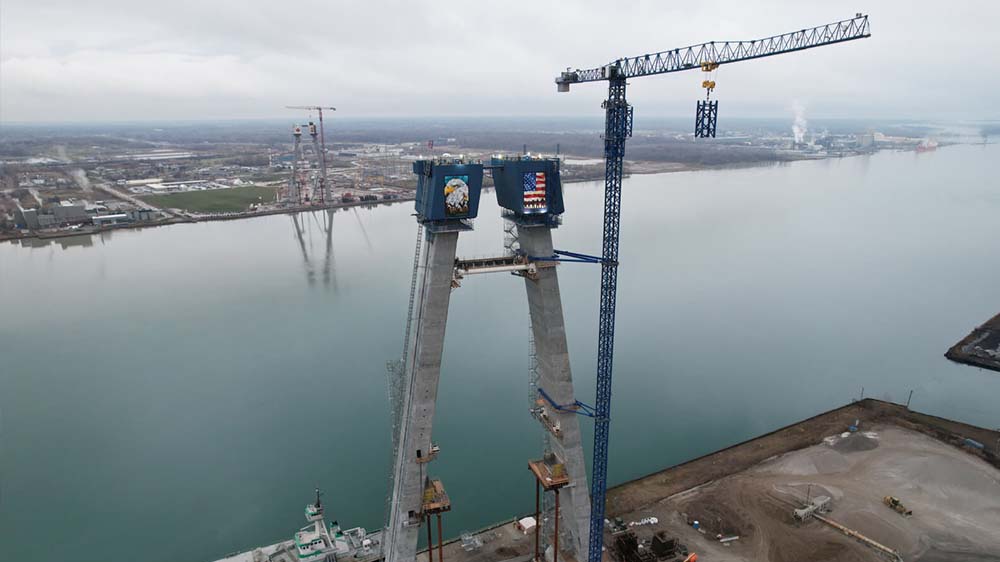 Above: Construction progress on the US side of the cross-border bridge. Image courtesy of Gordie Howe International Bridge.

Once complete, there will be six lanes of traffic and a path for pedestrians and cyclists. This project comes at a crucial time for American infrastructure, as bridges all across the country are reaching the end of their lifespan.

The Gordie Howe bridge is an impressive feat of engineering, but better yet, it has the potential to shape one of the most important border crossings in the world for the better. And maybe all that political drama will finally be water under the bridge.