IT'S lOCATED in one of the world’s driest and hottest deserts.

But that hasn’t stopped Las Vegas going from a small railway outpost to a city of over 2.2M people that now welcomes over 42M tourists in a typical year.

Vegas’ ability to reinvent itself time and again has seen it transform from an escape for the builders of the Hoover Dam into America's playground and the only city in the world where you can see the Eiffel Tower, Statue of Liberty, Egyptian Pyramids, and the canals of Venice all in a single day. 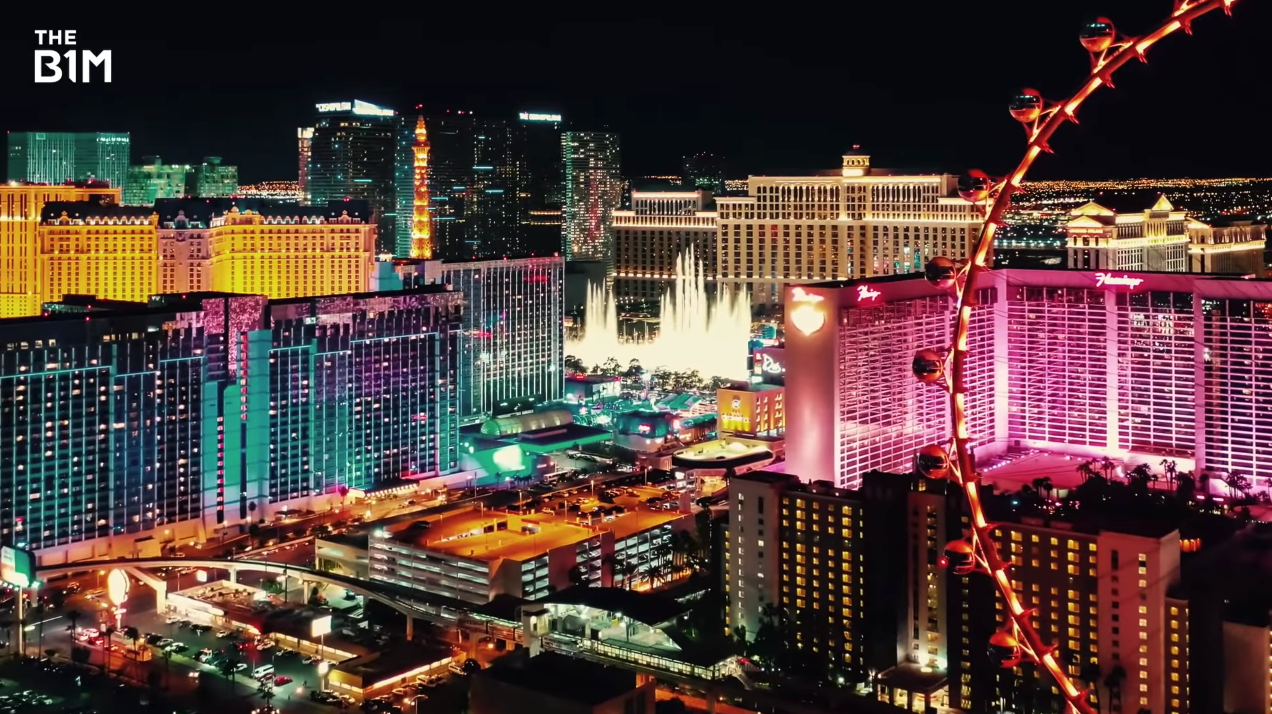 Above: The Las Vegas skyline.

But with some competitors now emerging in the Middle East and Asia, Las Vegas is in a fight to maintain its status as the entertainment capital of the world and is betting big-time on its latest attraction.

The world-first spherical structure, containing the world's largest and highest resolution LED screen that will not only transform the Las Vegas skyline, but quite literally reshape the live entertainment industry.

Since the days of Dean Martin and the Rat Pack in the 1960’s Las Vegas has been renowned for live entertainment and between showcase fights and residencies from Lady Gaga, Celine Dion, Britney Spears and Magic Mike the city is constantly raising the bar with what it has to offer.

Its latest offering, developed by Madison Square Garden Entertainment and located just off the strip behind the Venetian, is unlike anything anywhere else on Earth. 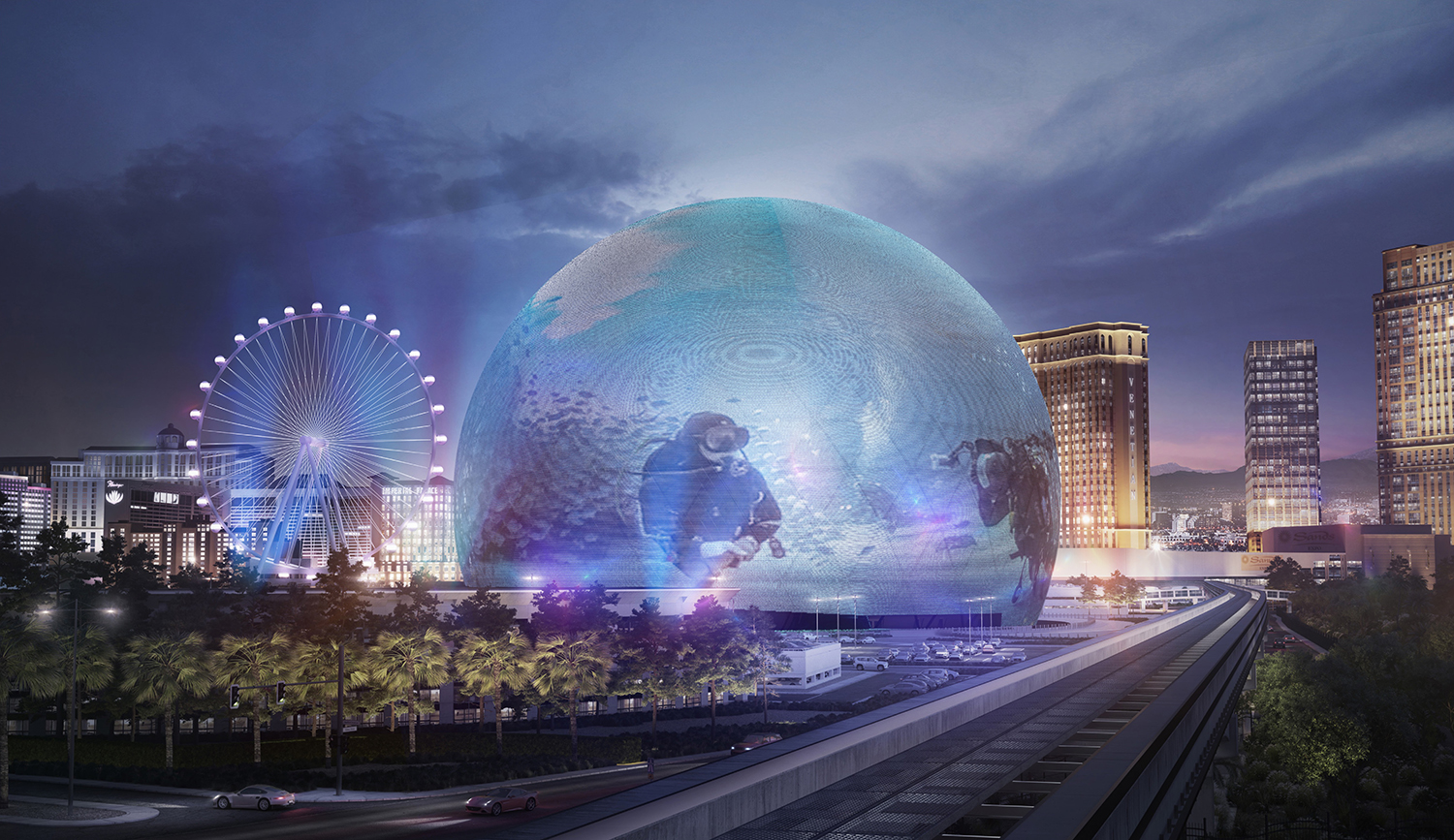 Above: The MSG Sphere will be a world-first entertainment venue. Image courtesy of MSG Entertainment.

Known as the MSG Sphere, the USD $1.8BN spherical entertainment venue will stand 112-metres tall, contain 17,500 seats and feature the largest and highest-resolution LED screen in the world - that’s 19,000 x 13,500 pixels in case you were wondering.

The screen covers an area larger than three football fields, wrapping up, over and behind the stage to give the audience a fully immersive experience that’s 100 times clearer than today’s best HD TVs.

Outside, the building will be fitted with 54,000 square metres of programmable lighting giving those outside a show of their own. 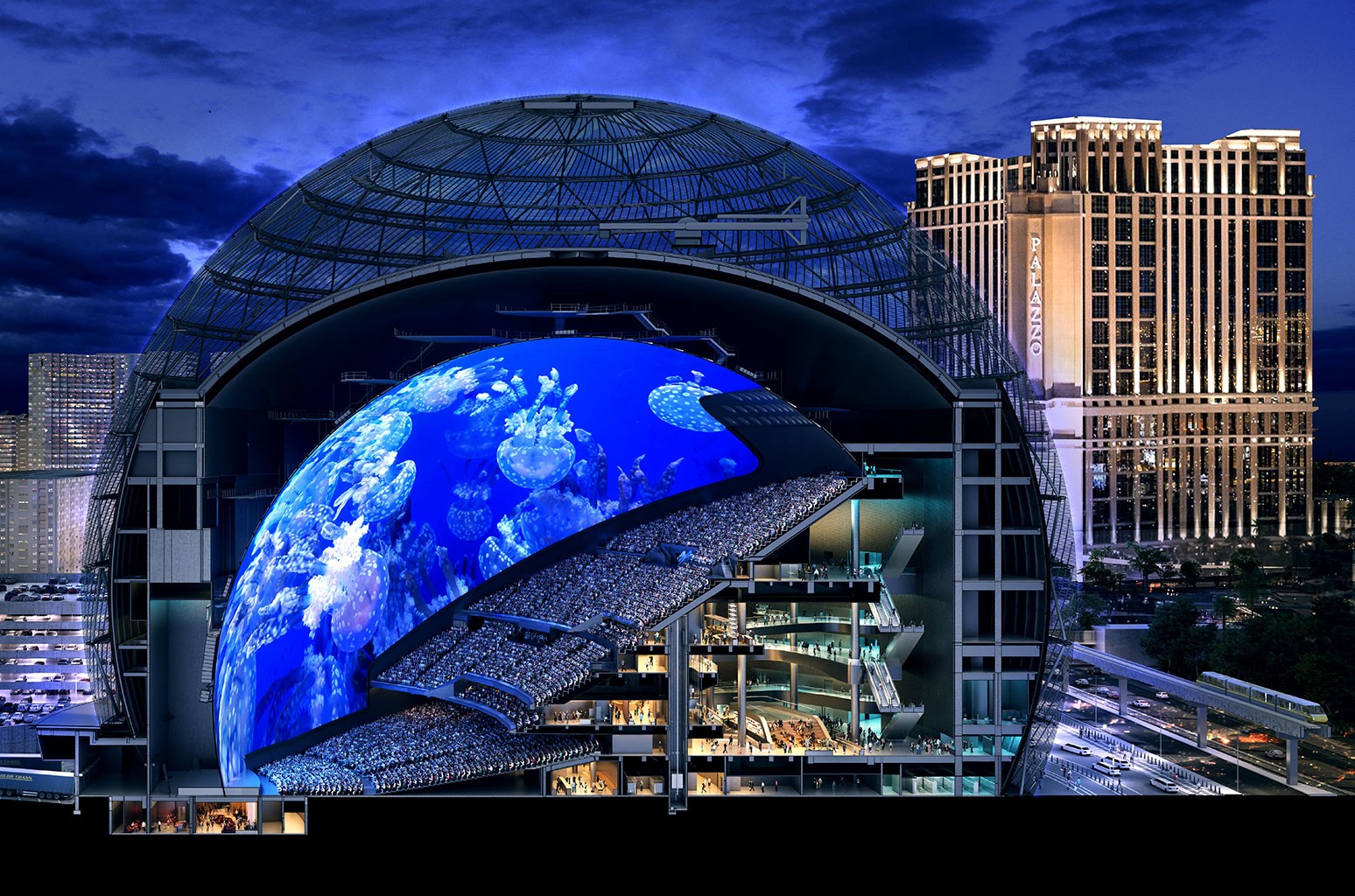 Above: The venue will house the world's largest and clearest LED screen. Image courtesy of MSG Entertainment.

But the MSG Sphere is more than just a high-definition screen. Using an advanced acoustics system known as beam-forming technology, multiple audio streams can be delivered directly to individual seats simultaneously while an infrasound haptic system will use vibrations to enable guests to quite literally, feel the sound around them.

It’s not just those experiences that are unique, the way the building is being built is also unlike anything seen before.

Work first began in 2018 with the drilling of nearly 600 piles and the excavation of some 84,000 cubic metres of material. 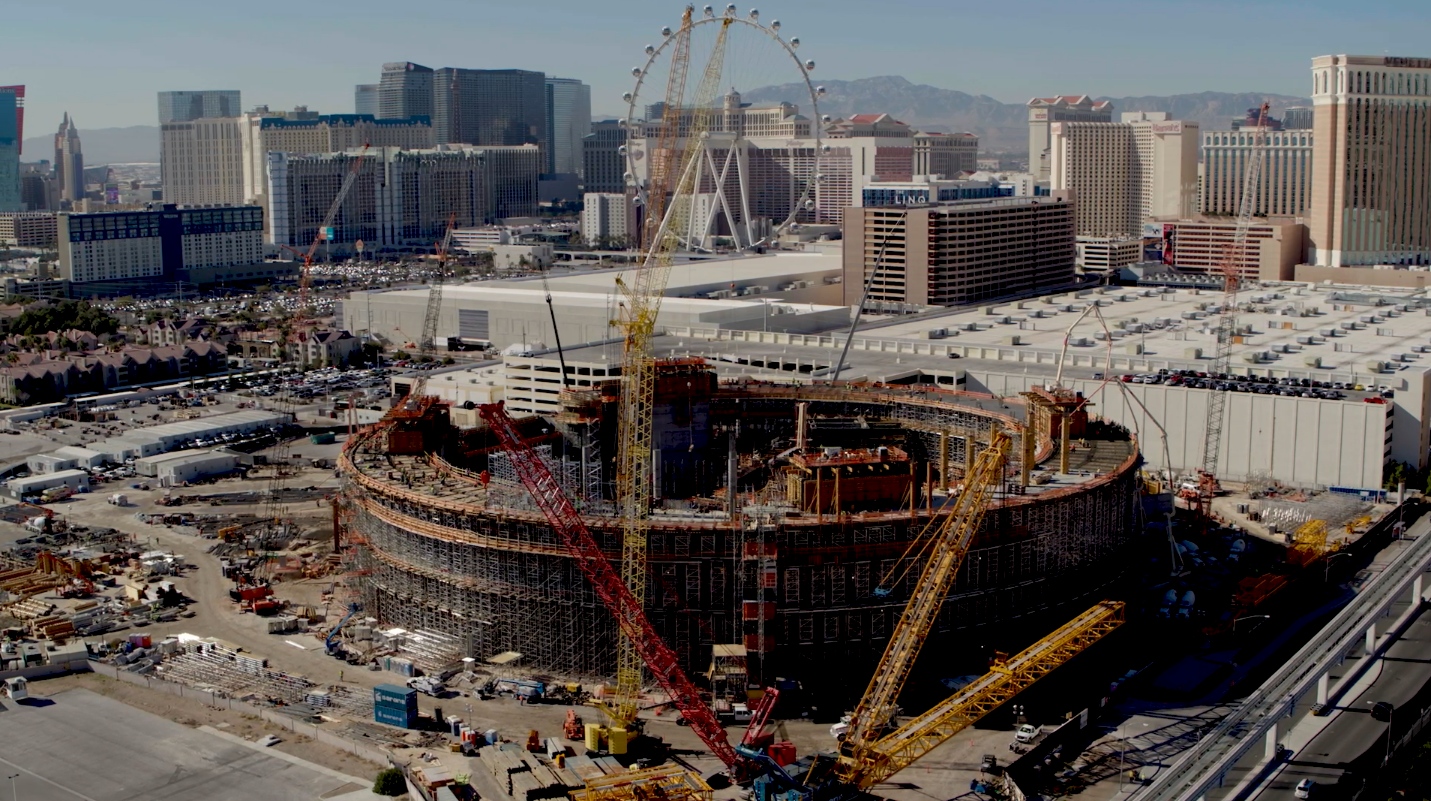 That’s not to stop the sphere rolling away but rather to support the weight of the immense structure and create a 5,000 square metre basement for events, dressing rooms and other amenities that make the venue run.

The building’s superstructure is made of four concrete cores tied together with 9,700 tonnes of steel to create a series of tensioned ring beams to hold the weight of the 11,000-tonne roof.

With such a big distance to span the team had to ship the world's fourth-largest crawler crane over from Belgium to position some of the largest and heaviest components.

Standing 10 metres taller than the nearby High Roller observation wheel at its peak, the crane was a construction project in itself - taking 18 days to assemble on site. 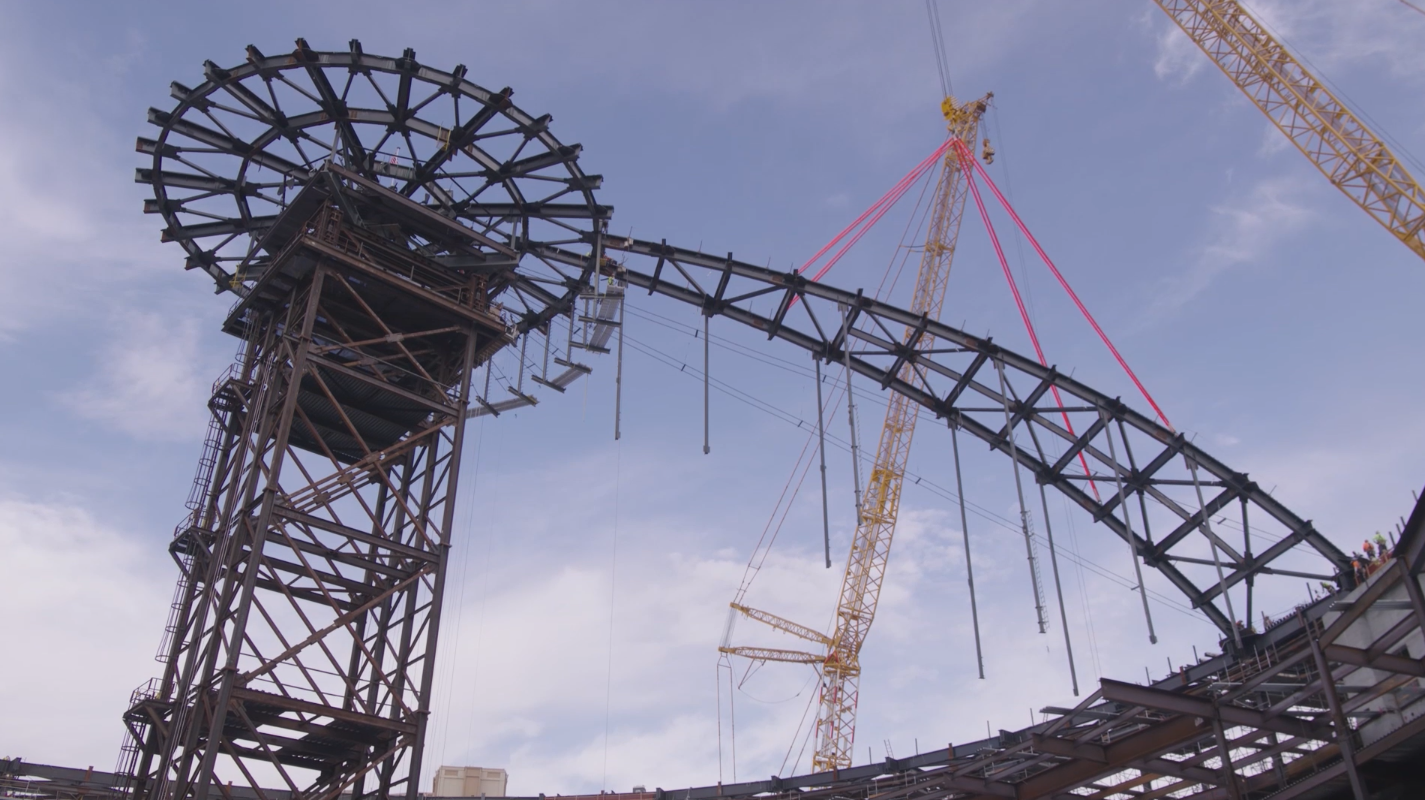 Above: The first of 32 trusses that will form the spheres roof. Image courtesy of MSG Entertainment.

To build the roof, an 86-metre shoring tower was first assembled in the middle of the arena.

Then a 154-tonne compression ring was placed on top, that 32 steel trusses all connected into.

Due to their immense size and weight the compression ring and trusses were each assembled on the ground over several weeks, before being craned-into place.

The temporary shoring tower was then removed and the equal forces of the roof structure began to counter each other - creating a column free, uninterrupted space within the sphere. 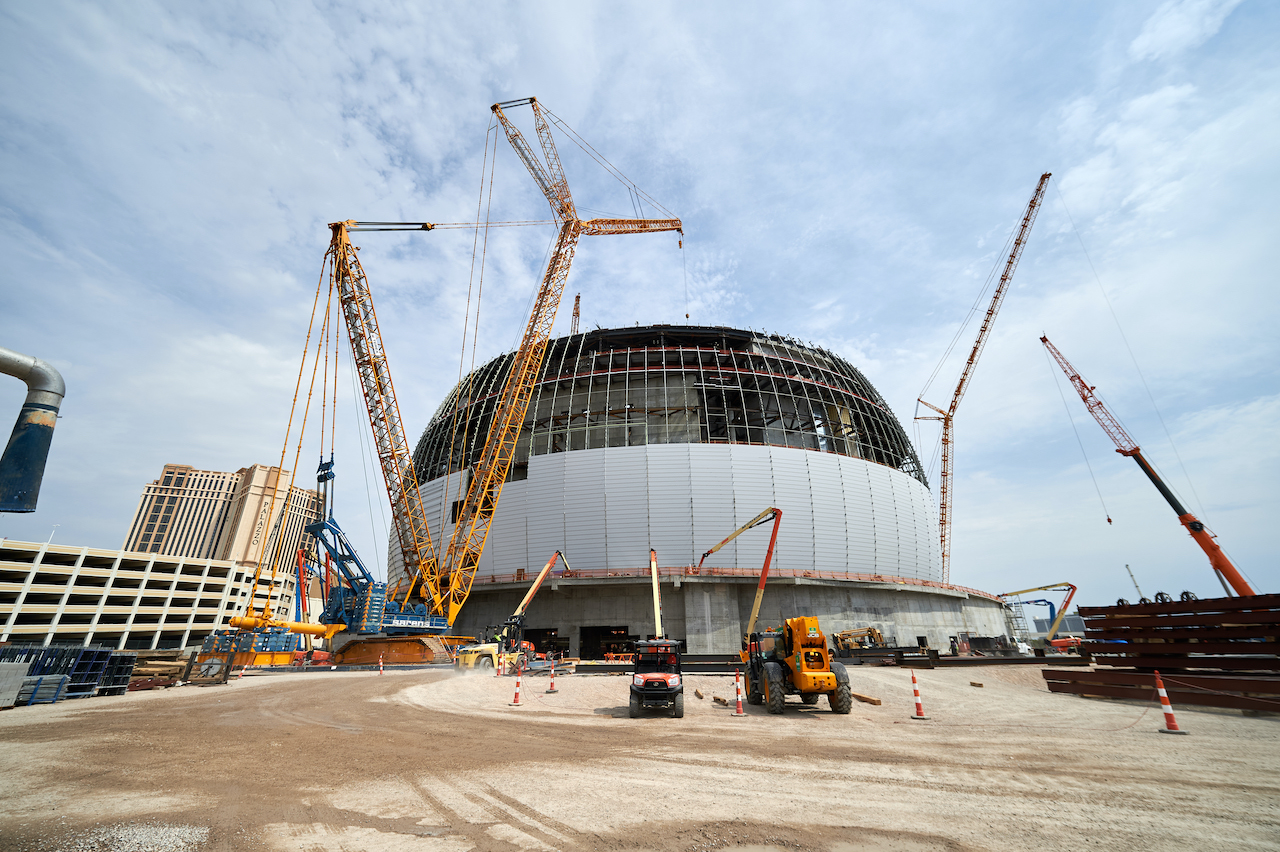 Above: Work is now underway on the building's exoskeleton. Image courtesy of MSG Entertainment.

Topping-out the steel framework in mid-2021, work is now underway on the sphere’s geodesic exoskeleton which will add an additional 24 metres to its overall height and provide the surface for the exterior LED displays.

Once the Sphere is fully enclosed, work on the state-of-the-art fit out will begin.

Like so many things, the project was briefly disrupted by the pandemic and its completion, and first performance are now set for 2023.

While some may have thought that MSG Sphere would be just another arena, the completion of its incredible structure has already made it an unmissable addition to the city’s skyline.

Set to connect to the Venetian and Palazzo via the Sands Expo and Convention Center and with an addition to the Las Vegas monorail planned, the MSG Sphere looks set to become the latest must-see in a city of must-sees - a building that’s every bit Las Vegas.

The Structures That Defy Gravity