The Structures That Defy Gravity

WHILE most conventional structures are designed with a clearly defined centre of mass, advancements in engineering, construction materials and building techniques have allowed some architects and engineers to conceive a range of awe-inspiring structures that seemingly defy the laws of physics.

Despite each of these schemes appearing unsettling at first, they are in fact as sturdy as any others.

From floating museums that reach into other countries, to breath-taking cantilevered sky gardens and truly terrifying observation platforms, these structures appear to defy gravity.

Sydney’s One Central Park is a twin tower mixed-use development with a highly unusual exterior.

Not only does the surrounding green space reach up the facade of the two towers, it also extends far into the sky in the form of the eastern tower’s cantilevered sky garden. 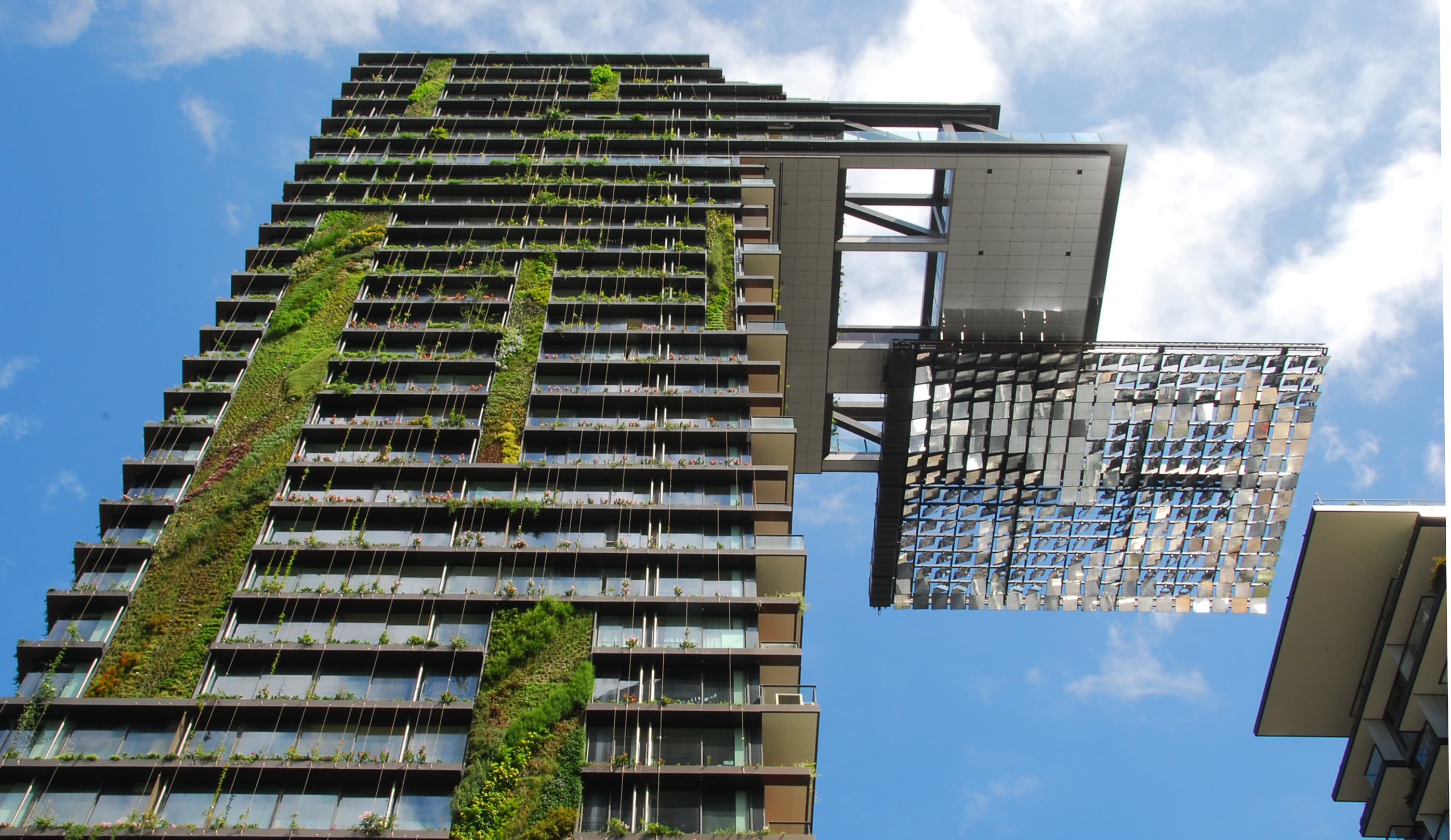 Above: The sky garden and heliostat on One Central Park extend 42 metres beyond the footprint of the building (image courtesy of Rob Deutscher).

Containing a range of residential amenities - including an outdoor terrace, barbecue facilities and a plunge pool - the most dynamic feature of this cantilever is a reflective heliostat featuring 320 motorised mirrors that bring natural light into the space between the two buildings.

Built using a steel truss system, the cantilever and adjoining heliostat extend an incredible 42 metres beyond the footprint of the tower. 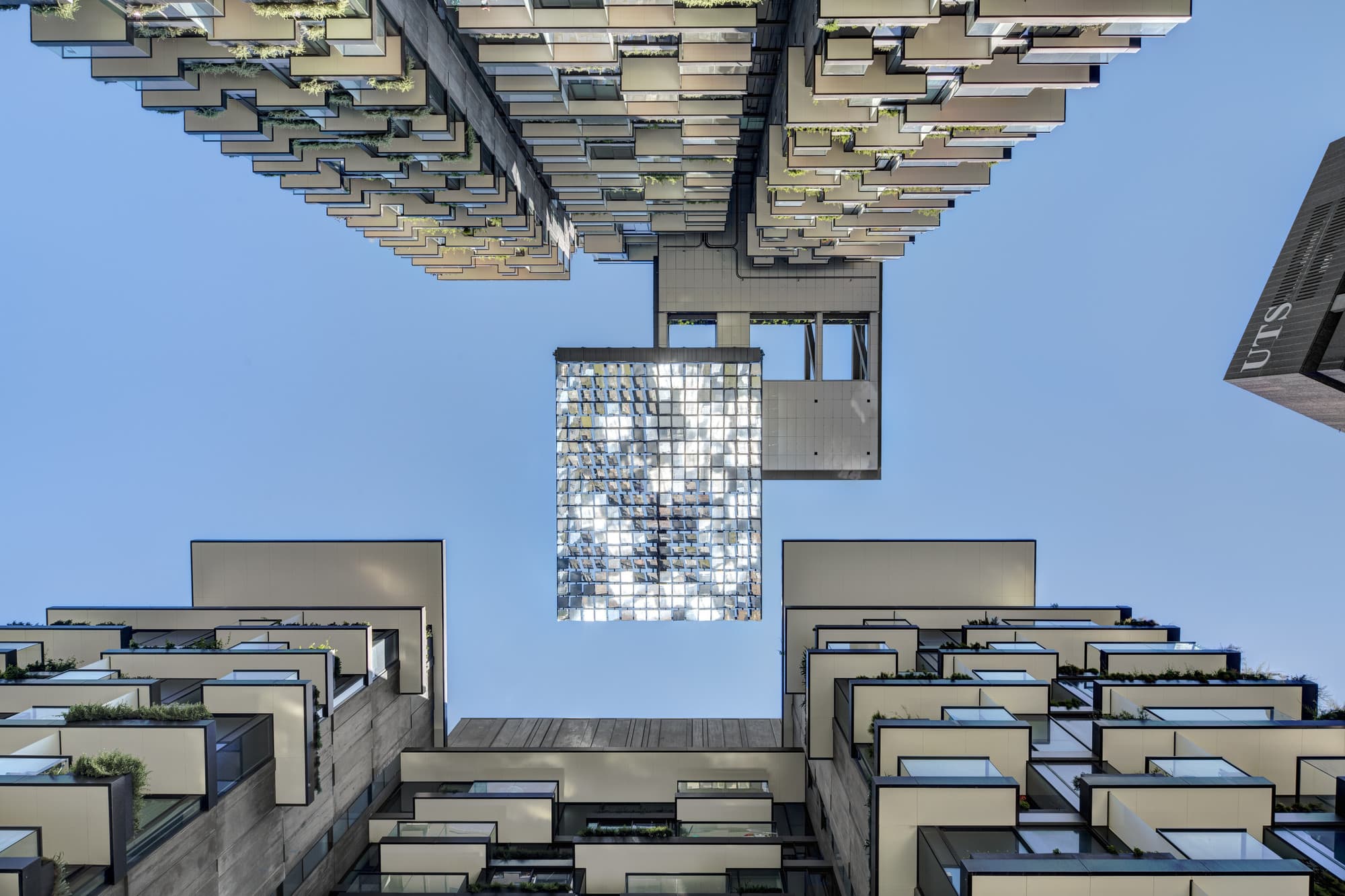 Above: The cantilevered heliostat redirects natural light into the heart of the tower complex (image courtesy of Simon Wood).

While reflectors in the heliostat track the movement of the sun during the day, by night, an array of LEDs turn the feature into a vibrant light display.

Forming part of the iconic Olympic Stadium for the 1976 summer games, Montreal Tower was set to support the venue’s retractable roof along with a range of other sporting facilities.

Above: Montreal Tower was built to support the roof of the 1976 Summer Olympic stadium (image courtesy of Stéphane Brügger).

However, despite construction works commencing in 1973, the tower stalled at 92 metres in height due to design complexities, the weather and strike delays. It remained unfinished during the Olympics.

Originally planned to be built entirely with concrete, when construction recommenced after the games it was revealed that the tower would, in fact, be too heavy to support itself if concrete was used as the primary building material.

In light of this set-back, steel was used to construct the remainder of the tower. 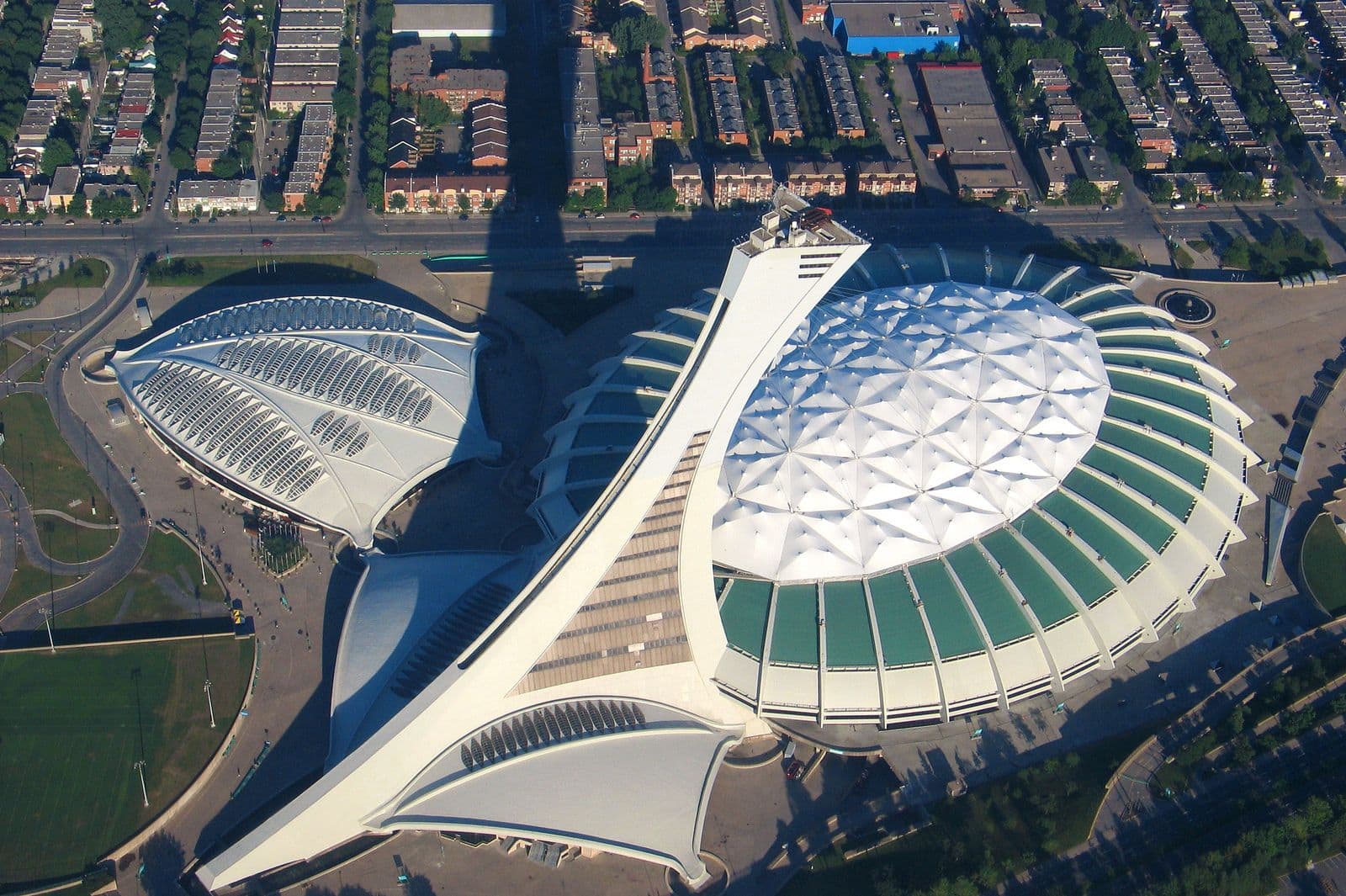 Above: At 175 metres and an angle of 45º, the tower is the tallest inclined structure in the world (image courtesy of Olivier Kerbidi).

Rising to an overall height of 175 metres, the tower reaches a 45 degree angle making it the tallest inclined structure in the world.

The building also features an observation deck, Canada's largest aquatic centre and, following extensive renovations in 2018, commercial space that will bring over 1,000 people into the tower each day.

Heading south and into the United States, we come to one of the world’s most adrenaline-inducing structures; the Grand Canyon Skywalk in Arizona.

Cantilevering 20 metres out over the edge of the Grand Canyon, this observation platform places visitors on a glass walkway above the canyon. 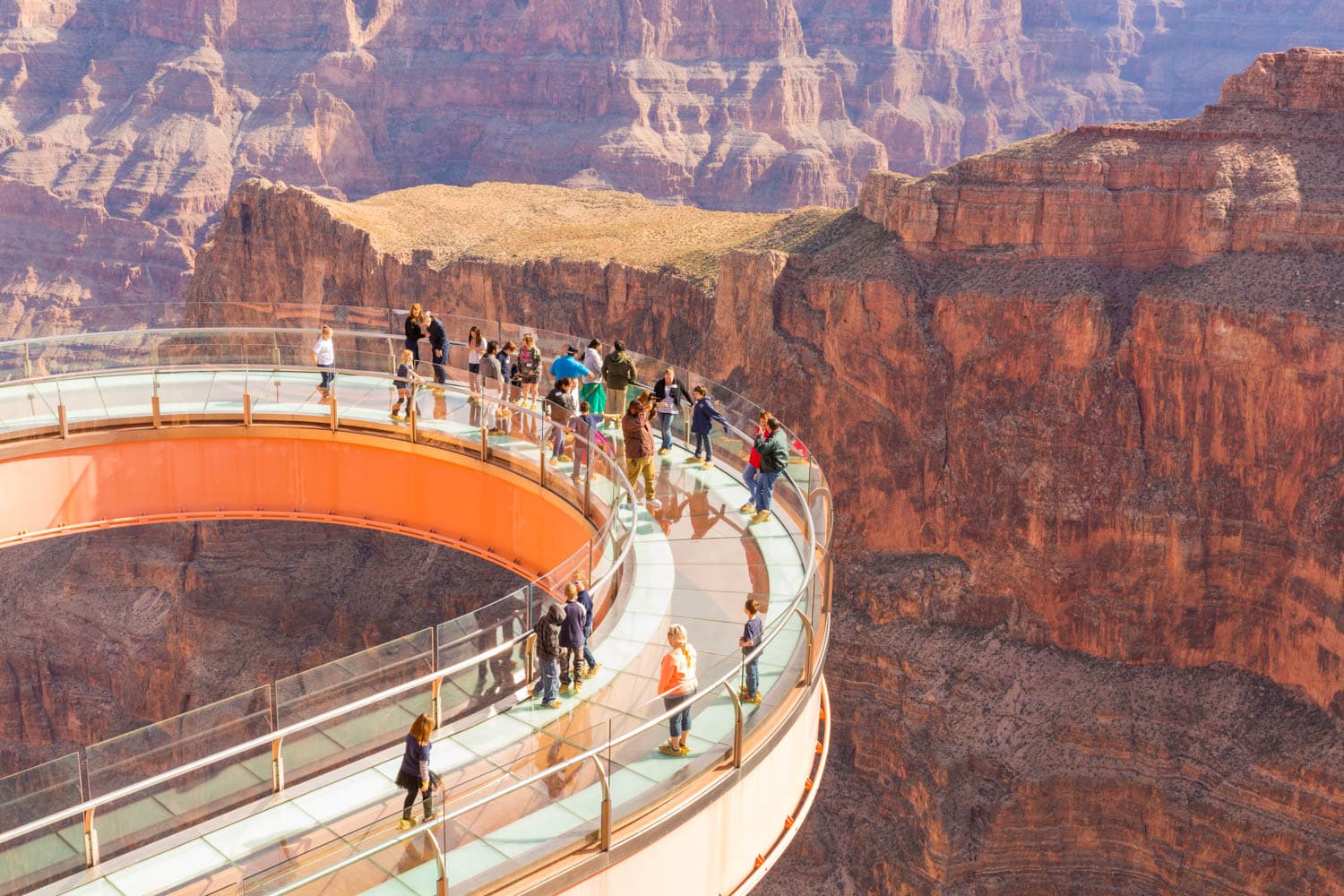 Above: The Grand Canyon Skywalk takes visitors on a hair-raising journey over the canyon floor (image courtesy of Grand Canyon Resort Corporation).

Built in conjunction with the native Hualapai Nation, this impressive platform required considerable engineering to achieve its structural stability.

The platform consists of an inner and outer beam that are anchored to four posts on either side of the platform.

These are in turn anchored in pairs to four large concrete footings which are themselves anchored 14 metres into the bedrock using high strength threaded rock anchors. 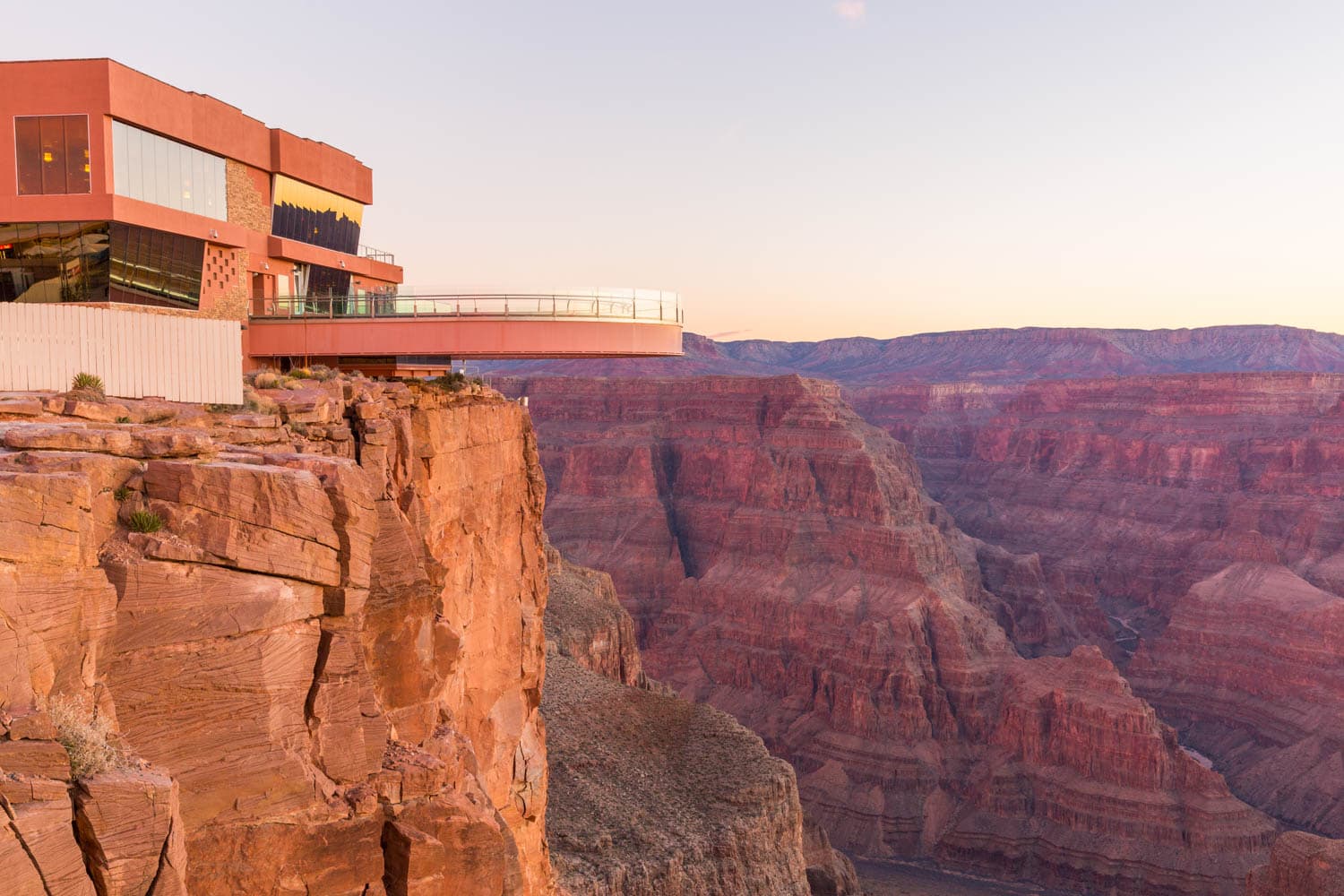 Additionally, to mitigate any vibration caused by wind and pedestrian loads, two tuned mass dampers are installed on either end of the platform, while a third damper is positioned at the platform’s greatest extent from the canyon wall.

Only 120 people are allowed on the platform at any time, despite the structure being engineered to hold 822 people without over-stressing.

Built to commemorate the 50th anniversary of the Timmelsjoch Alpine Road connecting Austria and Italy through the Tyrolean Alps, this museum cantilevers 16 metres out from the mountain while effortlessly paying homage to its surroundings.

While it appears to be perched precariously on the edge of a small hill, the mound cleverly hides the building’s foundations which are buried below ground and act as a counterweight to the protruding structure above. 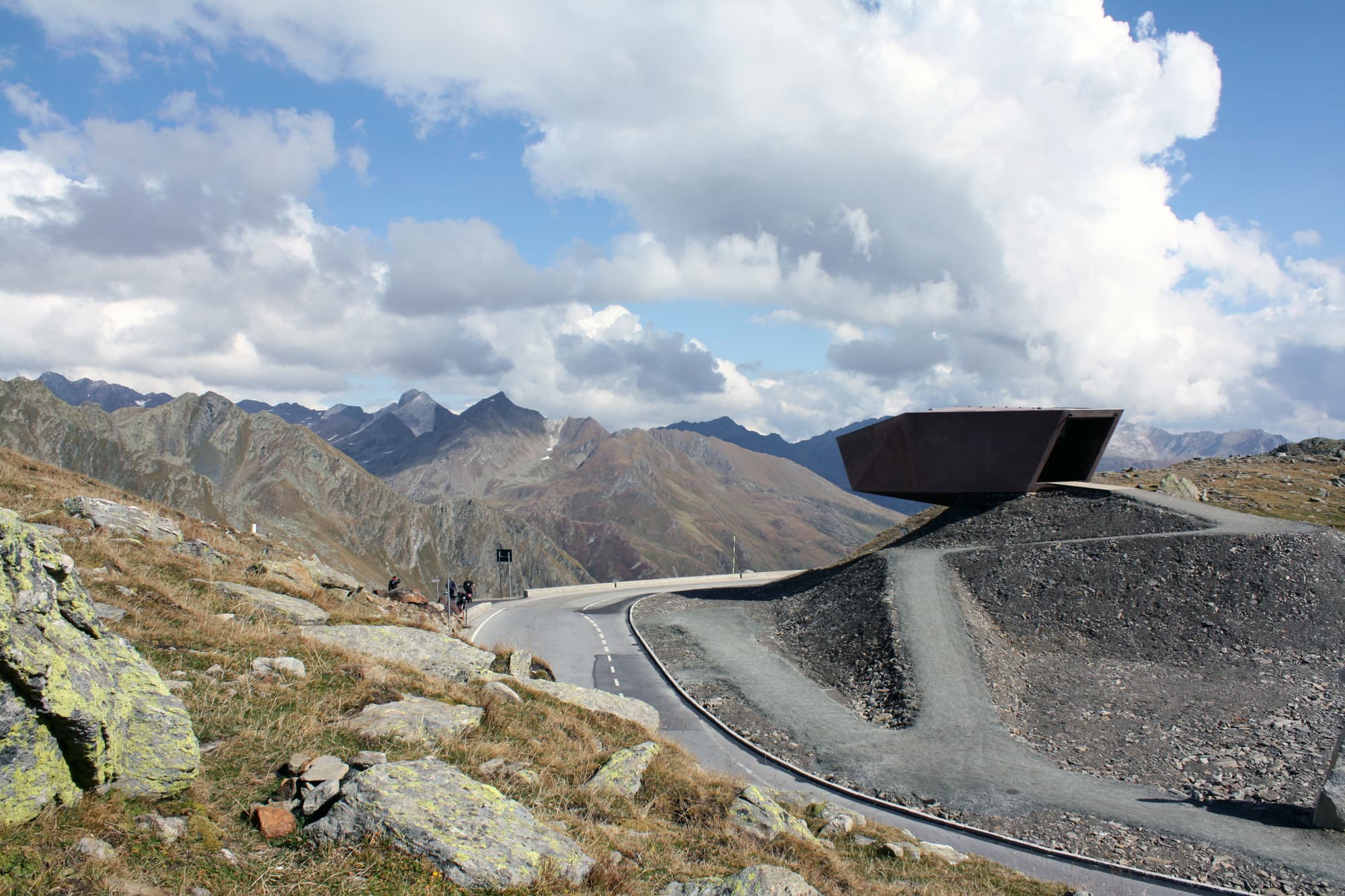 Above: Built to commemorate the 50th anniversary of the Timmelsjoch Alpine Road, the museum has its footings in Austria but extends over the border into Italy (image courtesy of Werner Tscholl Architects).

The cement used to construct the museum was blended with rocks and pigments from the surrounding area, allowing the structure to almost merge with its context.

With the region of Tyrol changing hands between the two countries throughout the centuries, the museum was built on a symbolic site along the pass. 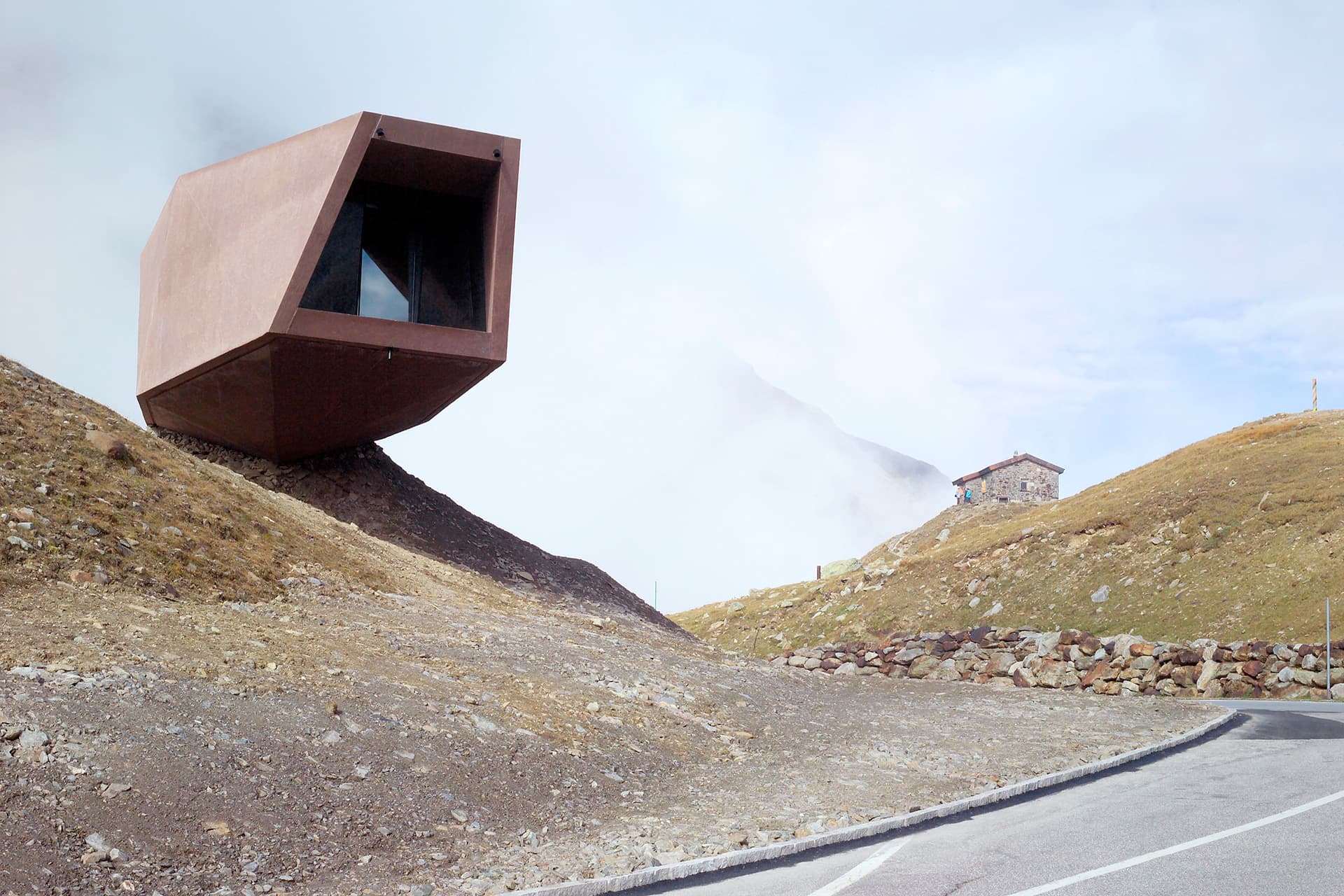 Above: Materials used to construct the museum were blended with surrounding rock and pigment to appear like a natural extension of the environment (image courtesy of Rene Riller).

While its foundations and entrance lie in North Tyrol - part of Austria - the opposing panoramic window at the end of the main structure in fact lies in the Italian territory of South Tyrol.

The striking CMG Headquarters in Beijing features one of the largest and heaviest cantilevers in the world.

Consisting of two inclined towers connected via a skybridge, the cantilevered element of this structure contains up to 13 storeys at its deepest point that is suspended 162 metres above the ground. 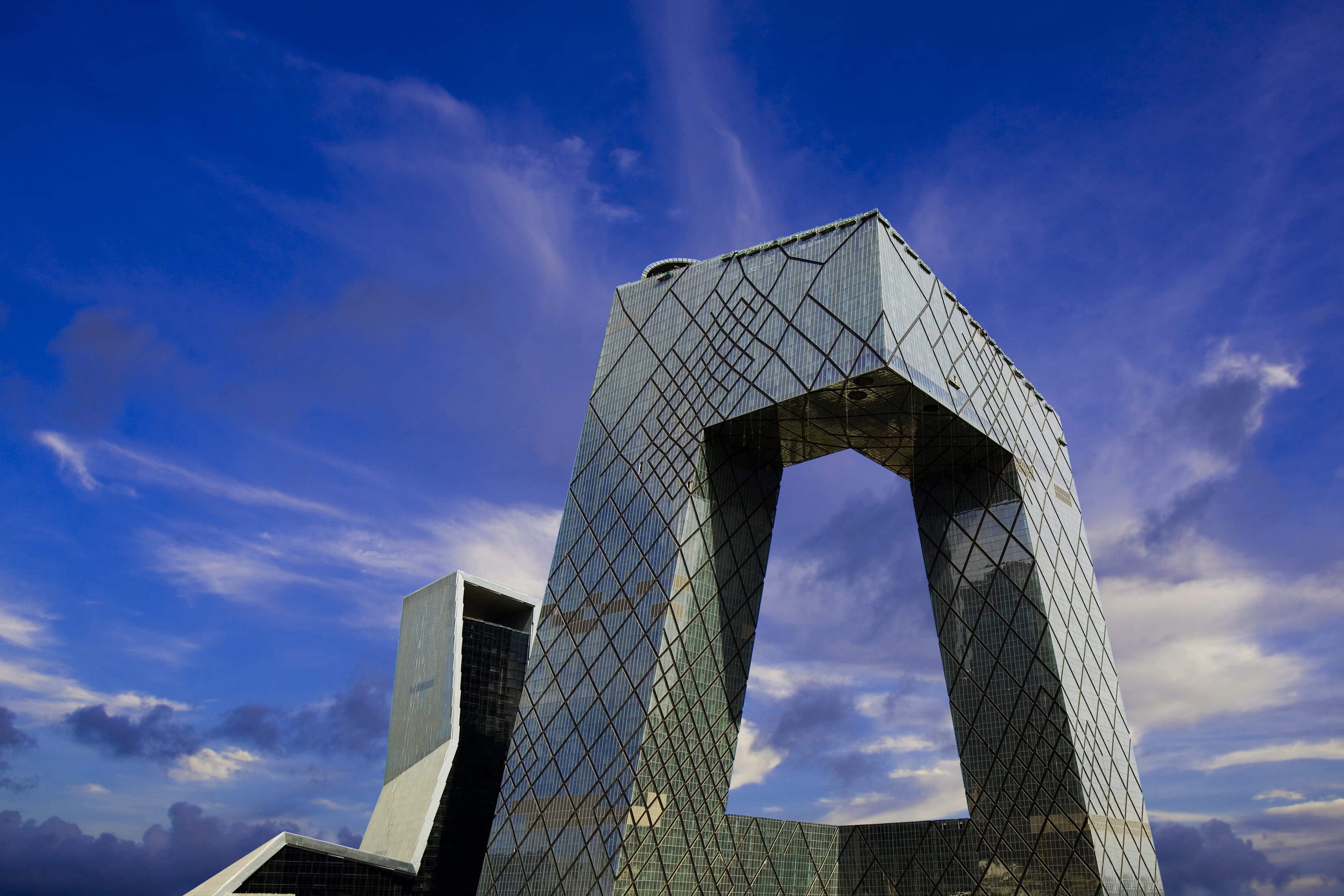 Above: The CMG Tower in Beijing is one of the largest cantilevers in the world.

To achieve this remarkable feat of engineering in an active seismic zone, engineers devised a unique diagrid exoskeleton to carry the structure's extreme loads and transfer them through the superstructure of the building.

Demanding more than 40,000 structural elements, this exoskeleton can be clearly seen on the exterior of the building.

The irregular pattern of these elements is a response to the varying levels of stress acting on the structure, with tighter diagonal patterns indicating areas of particular intensity. 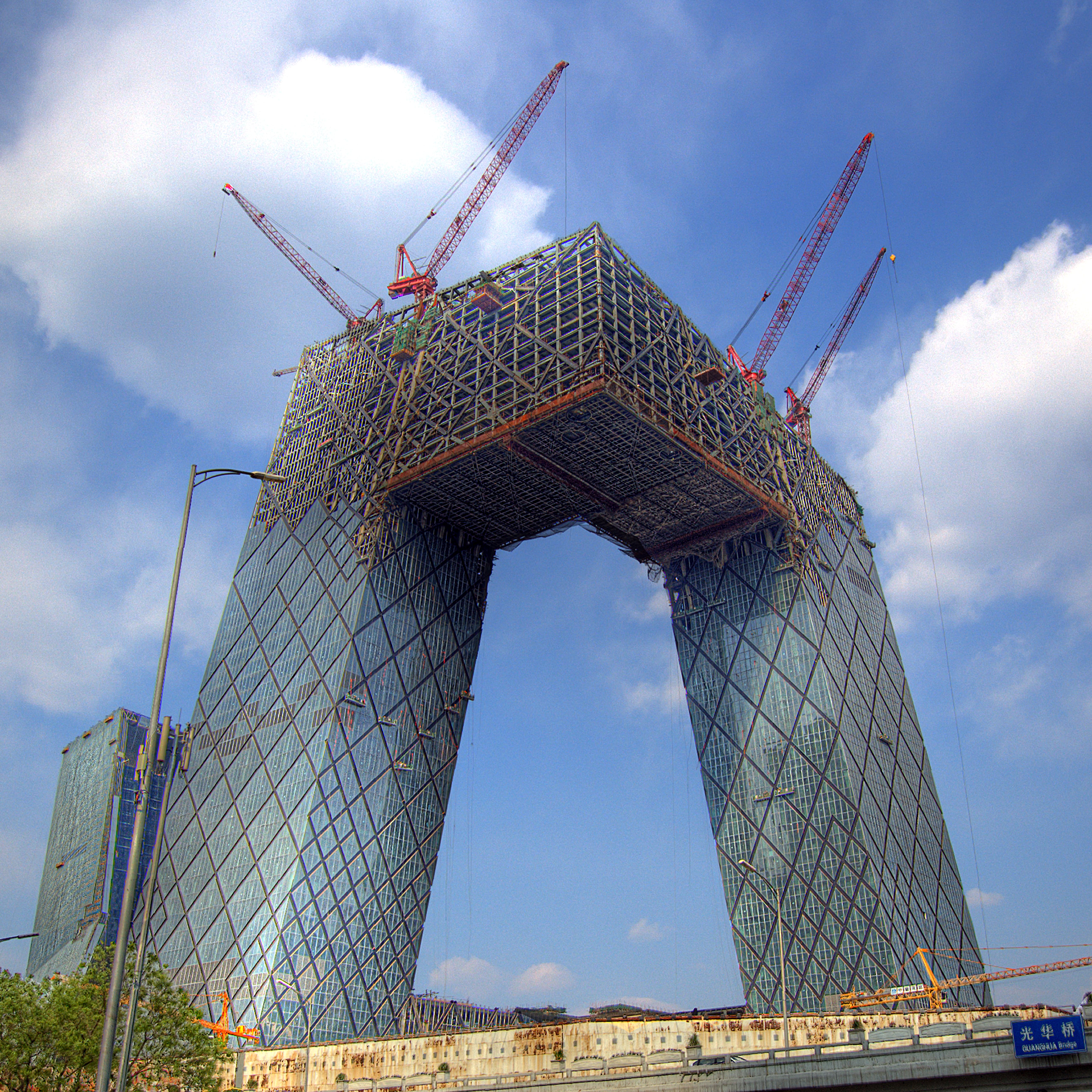 Above: The external diagrid patterns show where the building is under the greatest stresses with tighter grids indicating higher intensity (image courtesy of Jakob Montrasio).

With 17,000 tonnes of force acting on some of the building’s columns under normal circumstances, it was imperative that the steel used in construction was of uniform temperature when the two towers were connected, minimising any additional stresses that could arise from misaligned structural members affected by varying changes in temperature.

To ensure this, workers only connected the towers during the early hours of the morning, before the sun rose.

While each of these structures are in fact firmly secured to the ground, the engineering and technology that allows them to stand strong while inspiring wonder is a testament to the capabilities of our incredible industry.

The Car Park With an “Electronic Mural”