The SCAN-MED corridor runs from Finland all the way down to Malta - and, thanks to a bridge over the sea at Copenhagen, it’s all pretty easy-going, until you reach that rather major mountain range called the Alps. 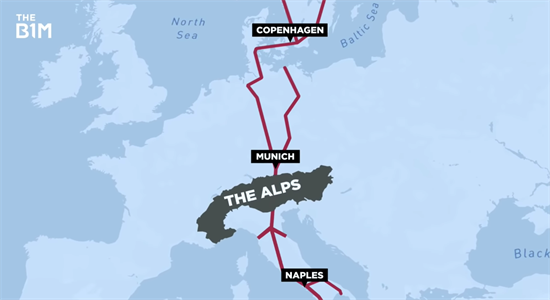 Above: The Alps present a significant barrier for people and freight to cross between Northern and Southern Europe. Image courtesy of OpenStreetMaps.

To solve the problem, the EU is now digging an $11BN tunnel directly through the very heart of the mountains to effectively connect Scandinavia with the Mediterranean.

Sitting 1,371 metres above sea level, the Brenner Pass is the lowest passage through the Alps and can be used all year round.

In 1867 the Brenner railway was built to improve capacity and by the 1970s it was joined by the E45 motorway creating a major freight thoroughfare for traffic heading from the North Sea down to the Mediterranean and vice versa.

Today the Brenner Pass carries 40% of all freight over the Alps, but due to the steep inclines and the impact that has on reducing the speed of trains - over two-thirds of freight actually travels by road.

This, combined with the leisure market in the region made the area notorious for traffic jams, noise and poor air quality - and in 1994 the EU decided to take action.

Modifying the existing railways is pretty impractical due to the terrain, so the decision was made to construct an entirely new railway tunnel directly through the mountains - somewhat dramatically getting around those steep inclines and meandering routes that slow trains down. 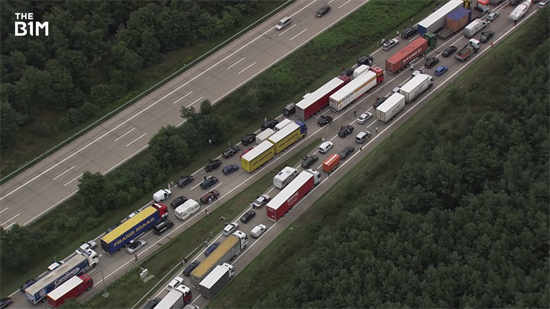 Above: Road congestion and the pollution it causes was a major factor behind the tunnel.

Starting at Innsbruck in Austria and connecting to Fortezza in Italy the main route of the Brenner Base Tunnel will run for 55 kilometres. When connected to the Innsbruck bypass tunnels built in 1994 the project will become the longest underground rail connection in the world, with a total length of 64 kilometres - surpassing even the Gotthard Base Tunnel in Switzerland.

The overall project consists of an exploratory tunnel - used to gauge the route’s ground conditions prior to construction and to act as a drainage system on completion, twin main tunnels set 70 metres apart which will carry trains in either direction and four lateral access tunnels that connect to the surface and allow for spoil and materials to be moved in and out.

If that weren’t enough the two main tunnels are connected every 333 metres and three emergency stations have been constructed 20 kilometres apart to provide escape routes and refuge for passengers if needed.

Works first began in 2008 and excavation has since been progressing across four main sites for more than a decade.

It probably won’t surprise you that digging a long tunnel through a mountain is not easy - and this is no exception. The route happens to run through four distinct rock types and one of Europe’s longest fault lines, so construction of the tunnels consists of a roughly 50/50 split between traditional blasting and tunnel boring (or TBM) methods.

For sections created by blasting, explosives are loaded into pre-drilled holes and detonated. 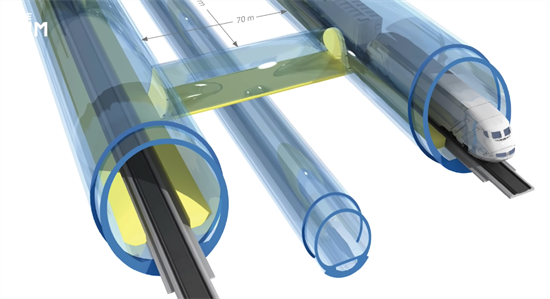 Above: The Brenner Base Tunnel will consist of three separate tunnels connected every 333 metres. Image courtesy of BBT SE.

Loosened material is then removed with heavy machinery in a process known as “mucking”.

Once cleared, shotcrete is applied to stabilise the surface and anchors, and lattice arches and reinforcement mats are installed to provide structural support. The whole process then moves forward and repeats itself.

The TBM sections are in principle much simpler. The machine excavates material, removes it via conveyor belts and applies tunnel reinforcement itself as it moves forward through the rock.

Regardless of which method is used, once excavated the tunnels are completed in largely the same way with only minor differences to the overall final appearance.

With an inner diameter of 8.1 metres, the project will see an incredible 21.5 million cubic metres of material excavated altogether with around a third of this material getting recycled; reused as concrete aggregate within the tunnel itself. 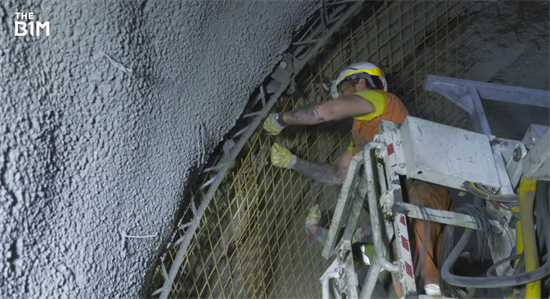 Above: Tunnel reinforcement being applied to a blasted section of the Brenner Base Tunnel. Image courtesy of BBT SE.

The rest will go to five sites along the route to be disposed of in a sustainable way - acting as fill for areas that can be reforested and landscaped once the project is complete, returning the site to its original use.

When it finally completes in 2028 - some 20 years after construction first began - the incredibly direct Brenner Base Tunnel will allow trains to reach 200 kilometres an hour, and the journey from Innsbruck to Fortezza will go from 80 minutes to just 25.

It’s a feat of construction that’ll create a cleaner and more sustainable transport link not just through a mountain range between two countries, but from Scandinavia all the way down to the Mediterranean.

Narrated by Fred Mills, Footage and images courtesy of BBT SE and OpenStreetMaps.