ASK any New York driver which highway they hate the most and you’ll probably get the same answer: the Brooklyn-Queens Expressway, or BQE.

More than 130,000 vehicles navigate the BQE’s narrow lanes and countless potholes every day. Despite its terrible reputation, the BQE is actually Brooklyn's only interstate-highway.

And after years of harsh weather and increasing traffic, sections of the roadway are crumbling.

"The worst consequence and I don't even want to think about it is that we have some kind of collapse or some kind of true disaster," Lara Birnback, executive director of the Brooklyn Heights Association said.

While most of us have probably never heard of it, this road is a big deal for New York. If it shuts down, the next best option is for hundreds of thousands of vehicles to drive through narrow residential streets to get to where they need to be – not exactly great in one of the world’s biggest cities.

Over the years, temporary band-aids and ideas to fix it have come and gone – there was even a move to tear it all down.

Plans for emergency repairs and a long-term strategy to fix the roadway are now being drawn-up, but as we know, things are never straightforward in NYC. The city that famously never sleeps also rarely makes construction cheap or easy.

This is how New York is racing to fix one of its most important arteries. 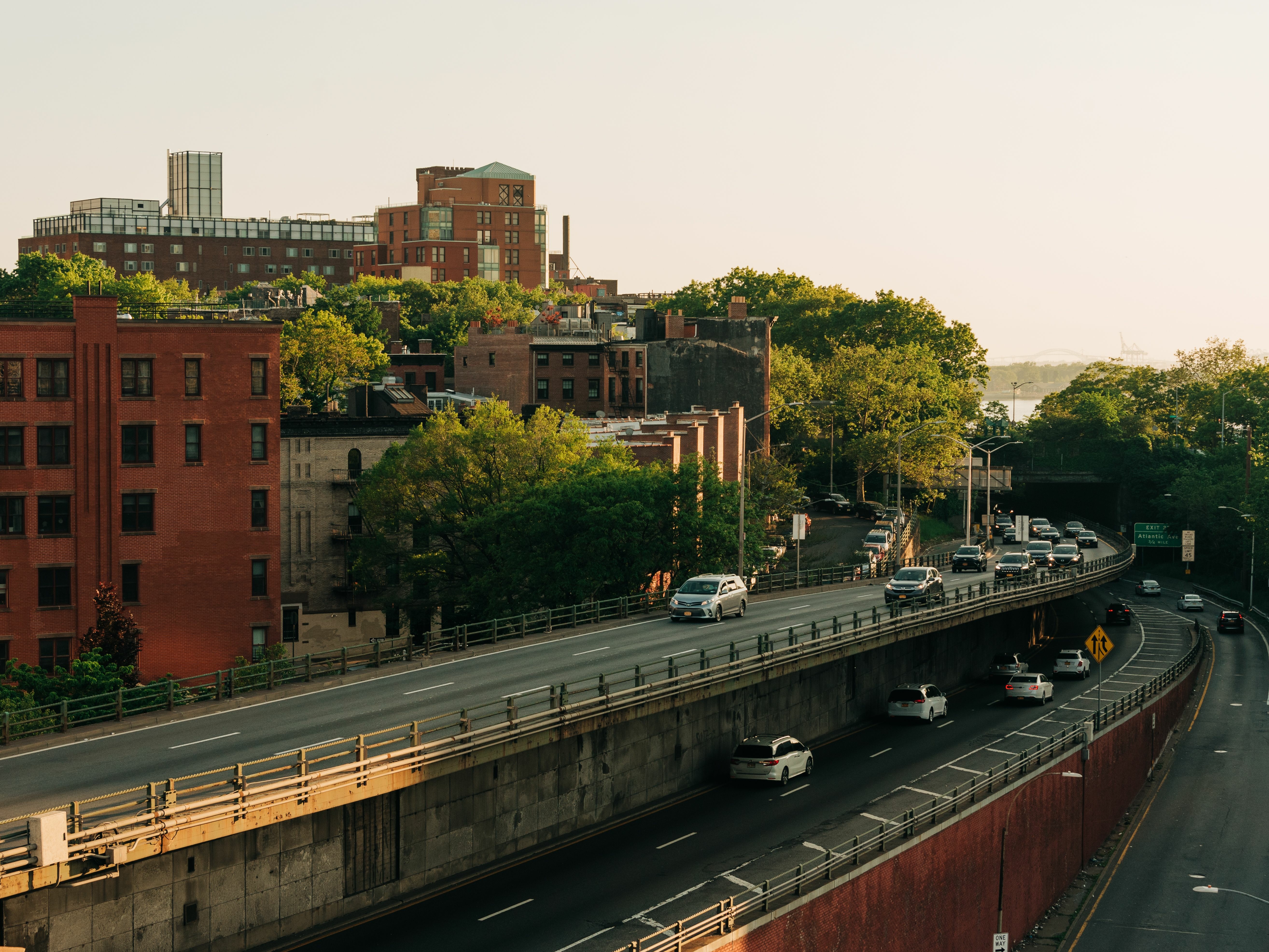 Above: A section of the Brooklyn-Queens Expressway in New York.

When you think about New York, you’ll probably think of its skyscrapers and then quite possibly its public transit system.

But its roadways are just as important. Americans love their cars and these routes help transport millions of goods, services, and people in and out of the five boroughs every day. Some of those roads are now nearly 100 years old – and seemingly in a state of constant repair.

Much of the city’s ageing transportation system can be attributed to Robert Moses. He was a famed, if at times controversial, city planner.

Throughout the early 1900s, Moses helped design many bridges, parks, and roads across New York.

One highway he proposed would connect Brooklyn and Queens to help alleviate traffic on the boroughs’ local streets.

At first he suggested a route that would cut right through Brooklyn, but it was shot down. So he changed the route to run along the waterfront, and in 1937, construction of the BQE began.

By the time the highway was completed in 1964, construction costs had reached $137M.

The BQE became one of the first roadways to accommodate both commercial trucks and commuters. Today, it’s pretty much critical for the city – and especially for the freight that it relies on.

Starting at Grand Central Parkway in Queens, the highway runs for nearly 19 kilometres right round to Red Hook, Brooklyn.

"It is really the primary trucking route that would connect from southern points of New Jersey up into the city to Brooklyn and Queens, even into Lower Manhattan, and then could be extended to Long Island," Rachel Weinberger, the Chair of Transportation of the Regional Planning Association said.

"There's no other trucking route and about 10-15% of the traffic on the BQE is freight at the moment."

Its most striking feature is easily its triple cantilever – an eight-block, three-level structure carved into a wall of land and made of concrete and steel.

The three overhanging levels consist of two roadways and an overlook area known as the Brooklyn Promenade. 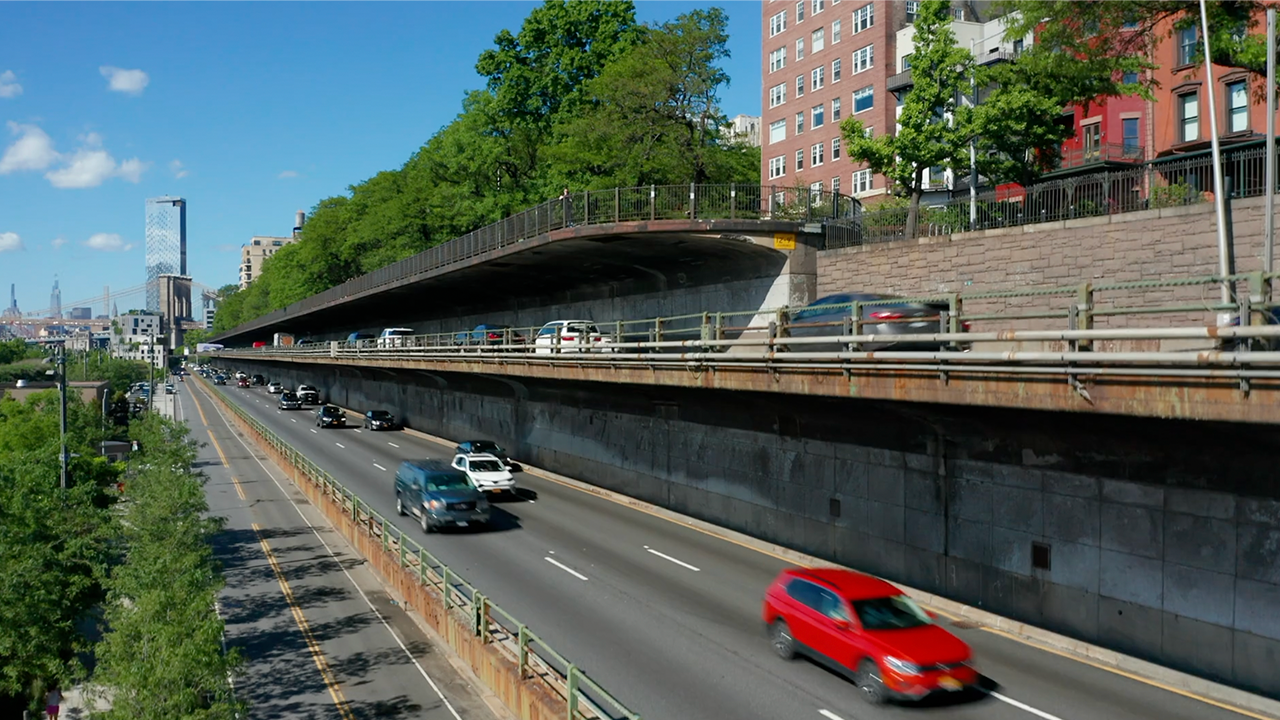 Above:  The three-level Triple Cantilever structure in need of major repairs.

But after years of wear and tear, and illegally overweight trucks – much of the road is beginning to disintegrate; and more specifically the city-owned 2.4-kilometre section known as BQE Central.

This part includes the triple cantilever – which is sadly in the worst shape of it all.

The steel inside the concrete is corroding thanks to excessive road salt and water infiltration. Steelwork in the 1950s didn’t have any protective coatings.

Now, that’s obviously a big problem and engineers are calling for immediate repair. Well, we say “immediate” – a report from 2016 – yes a report from back in 2016 – found that if nothing was done, the city would need to restrict all trucks on the road by 2026.

So, city planners and politicians have been (sort of) racing to put ideas forward to fix it – they’ve pitched a temporary highway, a road closure, a new tunnel, extensive waterproofing and even totally demolition the whole thing.

But coming up with a plan that makes everyone happy in New York is next to impossible and the years have rolled by.

The only progress so far has been closing one lane of traffic and restricting some truck access.

Then in 2022 – with a new mayor and federal infrastructure funding on the table, another new approach was announced.

Mayor Adam’s new accelerated plan is set to start in 2023, and it should be cheaper and faster than the previous ideas. It focuses on the critical city-owned section between Atlantic Avenue and Sand Street.

"City Hall, along with New York City Department of Transportation, has started a community engagement process to try to understand the needs and the desires of communities all along the corridor," Birnback said.

Of course, there’s still a long way to go before everyone’s on board, and disagreements could hold things up. Ongoing community meetings will continue for the next couple of years, along with a design process until official construction works start in 2026.

The cantilever needs the most emergency fixes, and on the Queens-bound deck – the concrete and rebar are being replaced. 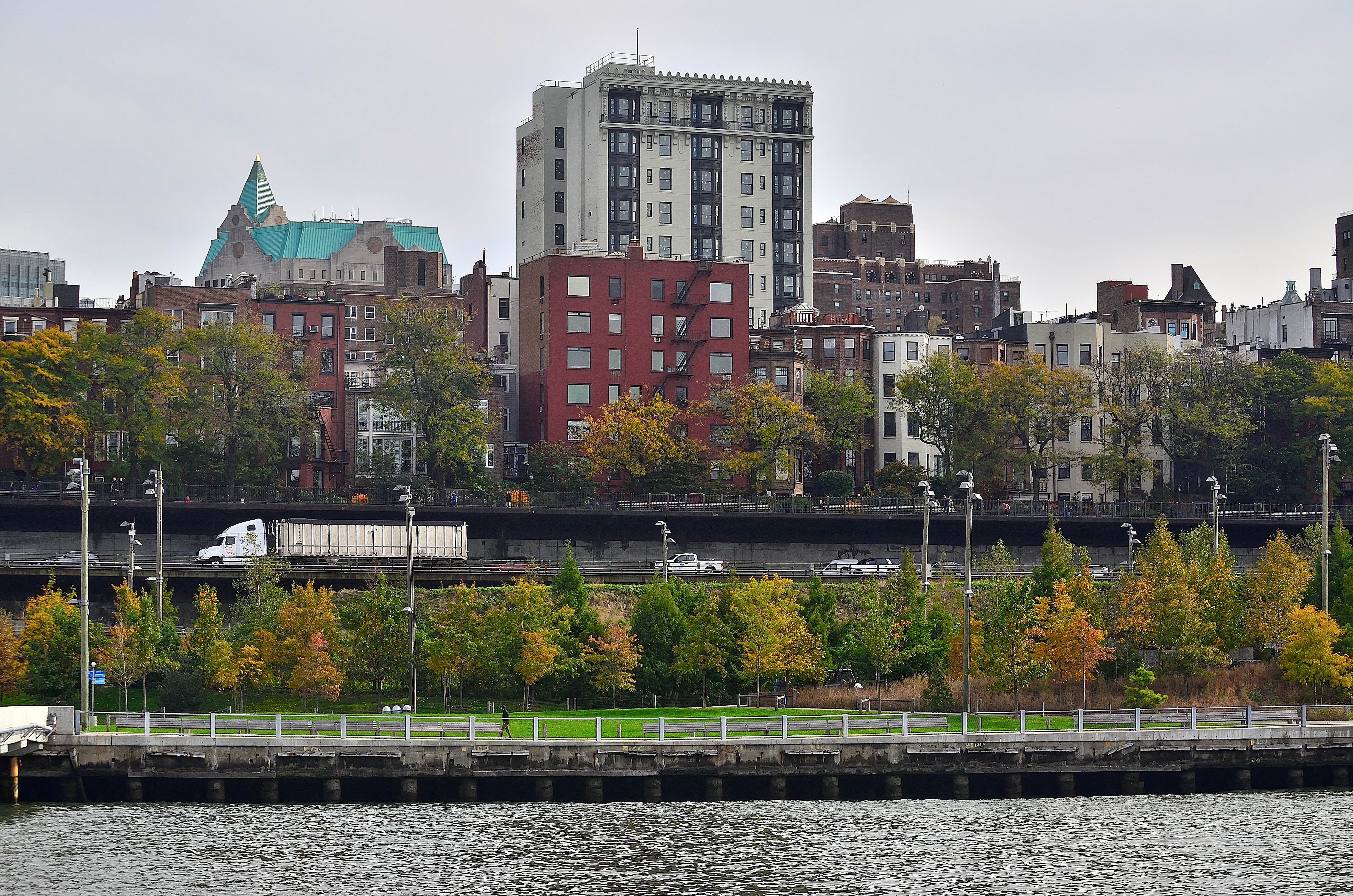 Here, workers will remove the deteriorated concrete. Then new steel plates will be added for reinforcement.

That means overnight lane closures on parts of the highway across a few weekends in 2023. Traffic is due to be rerouted through local streets and other modes of transportation are encouraged.

"But at the same time, I think that most people would agree that it's really important to keep the roadway as safe as possible. But I'm hopeful that they will they have had enough lead time to mitigate the impacts as best as possible."

It’s safe to say that repairing the BQE is no longer a future problem – it needs to happen now. Without this construction project, many of the people and freight movements that make New York run will be badly affected.

Some community members are hopeful about the future of the highway.

"One of the plans that I think people in our community have been excited about is the BQP - the Brooklyn Queens Park Plan from B.I.G. The Bjarke Ingels Group," Birnback said.

"I think, for people is that it really it creates tunnels and covers over the cantilever connects. We have an incredible world class park and Brooklyn Bridge park there along the waterfront. It would connect the promenade and sort of parts of Brooklyn Heights and more directly with the park."

"It would be great to see some of the ramps that lead directly off the BQE onto the bridges taken away," Weinberger said.

"Not so much to put traffic into the neighbourhoods, but partly because the traffic will evaporate to some extent can be accommodated differently. And those ramps take up again acres and acres and acres of space that could be used in all kinds of different creative ways."

The BQE is of course just one of many US highways in need of repair – but it powerfully personifies how critical these seemingly simple pieces of infrastructure are to our lives.

Fixing this highway underlines the essential nature of construction and creates an opportunity to think more imaginatively about how this industry can reshape our world for the better.