SINCE 2005, Finland has been constructing the largest nuclear reactor in Europe alongside a facility that could solve the problem of what to do with spent nuclear fuel.

When you think nuclear, the Nordic nation doesn’t immediately jump to mind, but if all of its planned projects come to fruition then, by the end of the decade, the country will be second only to France in terms of the percentage of energy drawn from nuclear systems.

After more than 10 years of delays and cost overruns, 2022 will see the world’s happiest country switch on one of the planet’s most advanced reactors, potentially kick-starting a new age of nuclear power. 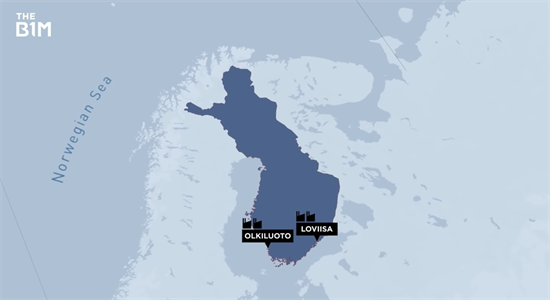 Above: Finland is already home to four of the world's most efficient nuclear reactors. Image courtesy of OpenStreetMaps.

Finland actually has a long history with nuclear power. Its first reactor came online in 1977 and by 1980, three more were operational providing a third of Finland’s total energy needs.

While these reactors are among the most efficient in the world – running at 95% capacity factor for the past decade and continually being up-rated over their lifecycle – growing demand and the seasonal fluctuations of other renewable sources like hydro and solar has left the country relying on imports from Russia and Sweden to make up the balance of its energy needs.

To lessen its reliance on foreign energy and to help meet its goal of carbon-neutrality by 2035 the Finnish government approved the construction of what was meant to be the world’s first third-generation pressurised water reactor (ERP) at its Olkiluoto Nuclear Plant, known as OL3, in 2005.

With an initial cost of USD $3.9BN, OL3 was to nearly double the plant's existing output and provide 14% of Finland’s energy needs when it became operational by 2010.

But while OL3 was the first EPR to begin construction - ahead of other next-generation reactors in France, China and the UK - complexities surrounding the design, defects in safety systems and contractual disputes led to over a decade of delays and in 2018 China’s Taishan 1 became the first EPR reactor in the world to start operating. 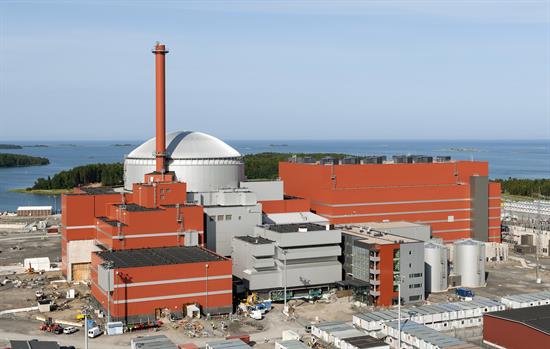 Above: More than a decade in the making, OL3 will begin operation in 2022. Image courtesy of TVO.

Despite these delays and the cost swelling to over USD $10.25BN, OL3 was granted an operating licence by Finland’s Radiation and Nuclear Safety Authority (STUK) in 2019 - and in March 2021, 116 tonnes of uranium began to be loaded into the reactor ahead of its final testing phase.

Once it’s connected to the grid and the reactor begins commercial production in early 2022, the countdown will be on until OL3 begins adding to Finland’s spent fuel stockpile.

Nuclear power is an incredibly clean way to produce energy, but it does create a by-product, and it’s the one problem we have yet to truly solve. 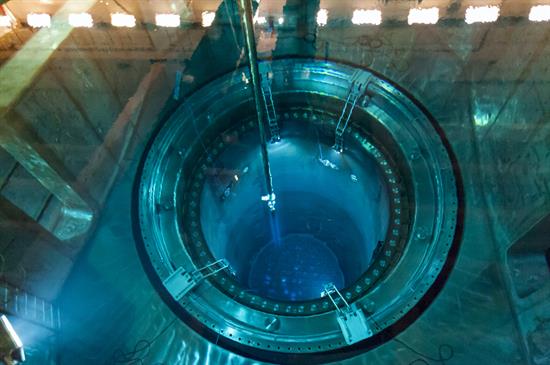 Above: Nuclear fuel being loaded into the reactor. Image courtesy of TVO.

After 3-6 years, irradiated material is no longer able to sustain a reaction as a viable fuel source and new material must be bought in to maintain the reactor's efficiency.

But while it’s unable to generate electricity, spent fuel remains highly radioactive and needs to be isolated for hundreds of thousands of years to prevent it from causing harm to people or the surrounding environment.

Although spent fuel can be re-enriched and re-enter the fuel cycle the primary way in which we currently deal with radioactive waste is to simply store it in pools or sealed dry storage facilities while it slowly decays.

While these methods keep spent fuel contained, it’s not a viable long-term solution as the system is heavily reliant on mechanical and human intervention and even under the strictest conditions, it can be vulnerable to acts of terrorism or natural disasters - the kind that led to the events at Fukushima in 2011.

With an estimated 250,000 tonnes of high-level waste already in storage around the world and with no long-term strategy for dealing with it, many countries have chosen to completely rule out nuclear power when it comes to meeting their growing energy needs.

To solve this, since 2005, Posiva - a joint venture between Finland's two nuclear power providers - has been constructing the world’s first deep geological repository for spent fuel in the billion-year-old bedrock not far from OL3.

Funded by charges collected from consumers through electricity sales, the USD $1BN project that’s due to complete in 2023 will see a series of tunnels extend half a kilometre below ground creating a permanent disposal facility for spent fuel. 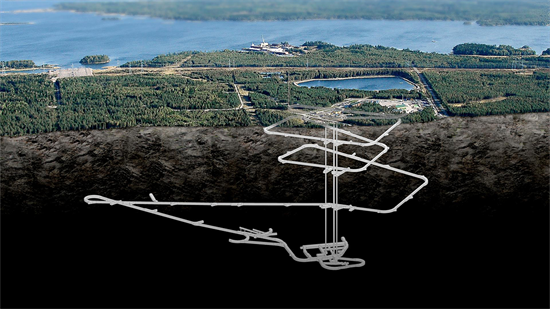 Above: The facility at Onkalo reaches up to half a kilometre below ground. Image courtesy of Posiva.

While burying nuclear waste might sound alarming and may cause concern to environmental groups, the process at Onkalo is so much more than simply burying the problem.

Based on a Swedish disposal method known as KBS-3, irradiated material is placed into boron steel canisters and enclosed within corrosion-resistant copper capsules before being buried in individual holes and backfilled with bentonite clay - entombing it forever.

Once buried, no further mechanical or human intervention is required to contain the radioactive payload, essentially eliminating one of the biggest barriers many countries have when it comes to adopting nuclear power.

With the capacity to accommodate the last 50 years’ worth of Finland’s accumulated spent fuel and the needs of its existing reactors until at least 2120 – at which time the facility will be permanently sealed - Onlako appears to provide a viable long-term solution to dealing with nuclear waste. 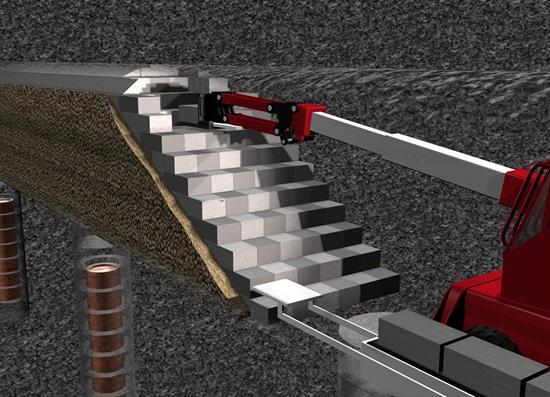 Above: Once the canisters are buried the tunnels are backfilled, entombing the nuclear waste forever. Image courtesy of Posiva.

Described as a “game-changer” for the industry by the Director of the International Atomic Energy Agency (IAEA), the lessons learned at Onkalo are being shared with other countries and regions with suitable geological characteristics are being considered for similar disposal sites.

Having seemingly solved the biggest drawback of nuclear power and with a sixth reactor already planned to begin construction next year, Finland looks set to play a leading role in the widespread adoption of nuclear technology as the world continues to transition away from fossil fuels.