PANAMA CANAL is currently undergoing a $5.25BN expansion programme to increase its capacity; the largest works on the waterway since its original construction. Here, The B1M’s Fred Mills takes a look at how building information modelling (BIM) is helping the project.

Panama Canal handles around 5% of all global trade, making it one of the most important waterways on earth. It effectively provides a short-cut for ships between the Atlantic and Pacific oceans through Panama in Central America.

The canal has been operating at capacity for some time, with ships forced to queue for entry. The current expansion programme commenced in 2007 and will complete in 2016. The project – which has created some 30,000 jobs – involves the deepening of channels at the Atlantic and Pacific entrances; the deepening of shipping lanes in Culebra Cut and Gatun Lake; the raising of Gatun Lake’s maximum operating level, and, at its core; the $3.2BN USD “Third Set of Locks” project. 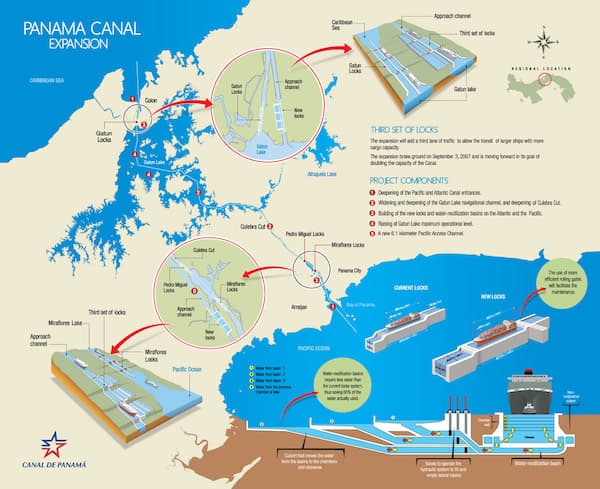 Panama’s expansion is one of the world’s largest civil engineering schemes and the Third Set of Locks involves the pouring of some 4.4 million cubic meters of concrete. Once operational, the new locks will be 40% longer and 60% wider than the originals, allowing the waterway to eventually double its shipping capacity.

The design is required to withstand major earthquakes and has advanced seismic design state-of-practice. The lock gates alone contain a staggering 50,000 tonnes of steel.

Panama Canal’s expansion is one of the first large-scale civil engineering projects to use BIM and it really has benefitted the scheme at every stage. The project team includes a number of leading international contractors and consultants. MWH Global lead the design process under a joint venture (JV), subcontracted under the design-build consortium of Grupo Unidos por el Canal.

Above: A view of the graphical model for the Third Set of Locks project (image courtesy of MWH Global).

The scale of this project means that MWH are collaborating with design teams in five different offices around the world, working on numerous elements simultaneously. The use of information models, hosted in an accessible common data environment (CDE) online has allowed this diverse team of engineers to better collaborate and co-ordinate their information, regardless of where they are geographically.

Combining design information models in this way has helped to resolve conflicts and discrepancies before construction, saving time and money. Purely on the graphical side, the 3D models have given the team powerful insight into the large and highly complex designs.

Despite these design-phase advantages, BIM adoption at Panama Canal has not been entirely wholesale; largely because of the project’s length. The period between 2007 and 2016 has seen BIM steadily become understood and developed around the world. Standards and technology have evolved since the project has been on site and the project team have been learning along with the rest of us. 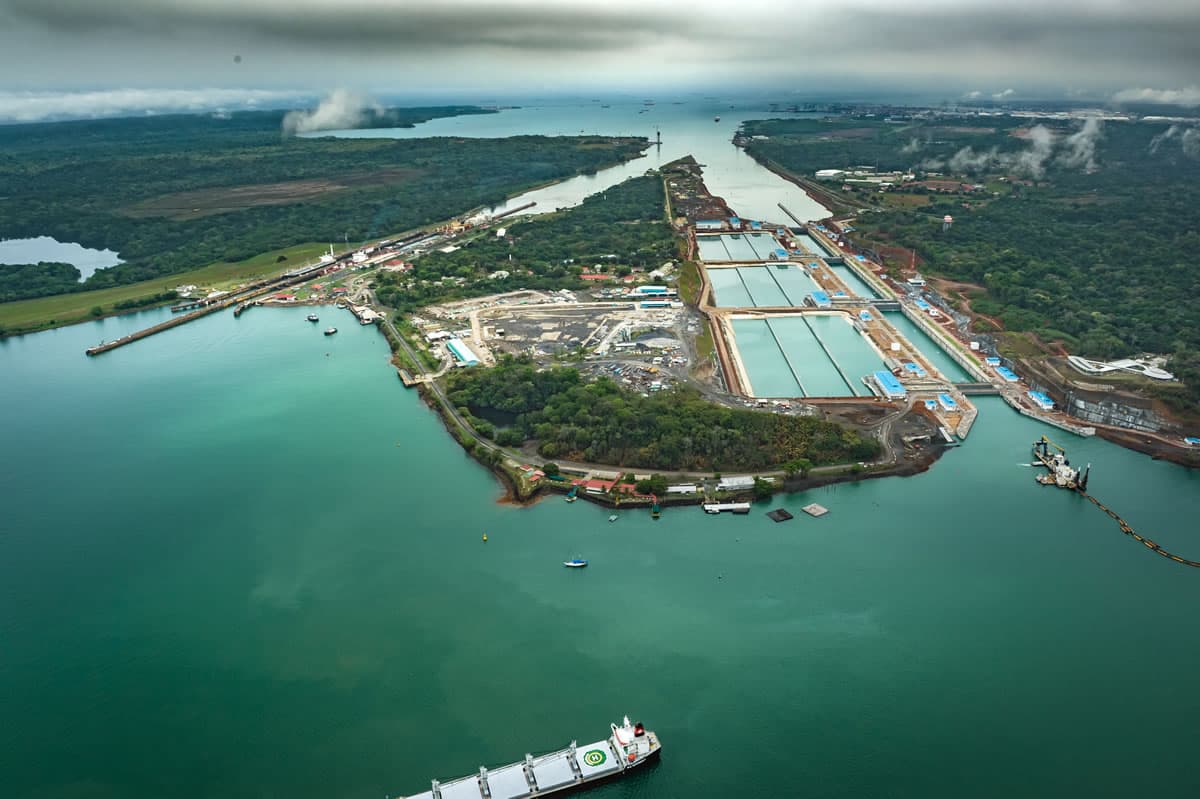 Above: The mouth of the Panama Canal, which carries around 5% of all global trade. Below: Part of the "Third Set of Locks" under construction (images courtesy of Canal de Panama). 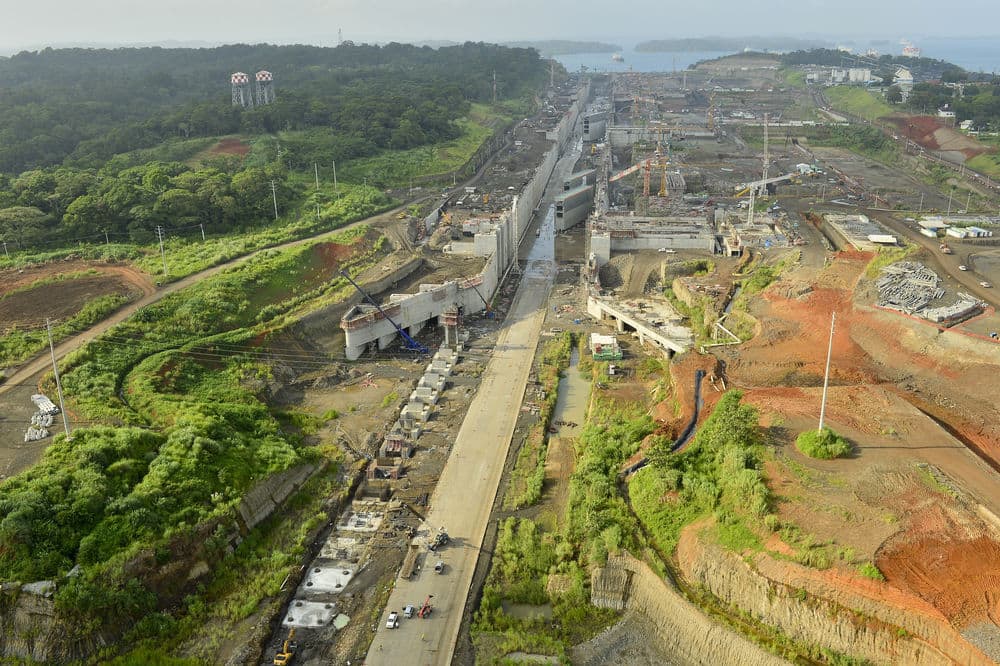 Whilst the designers have worked within a BIM environment, construction-issue information was extracted and presented to the contractors in a more conventional way, largely to meet the demands of the programme. In graphical terms, that meant 2D drawings, cut from the 3D models.

The design team would have liked to link structural and hydraulic intelligence analysis into their models and are keen to do so on future civil engineering projects. Unfortunately it proved a step too far at Panama.

The information models have had their uses beyond the design team. The data has enabled rough take-offs for the purposes of estimating and the 3D representations have allowed contractors to truly visualise and understand proposals. The complex layouts of the mechanical and electrical systems for example were visually presented, proving an efficient and powerful communication tool.

“An efficient and powerful communication tool”

The Panama project team want to link the work they are doing in asset creation to asset management.

They are using their BIM workflows to capture asset information for the end-user and tagging physical equipment with ID tags for a master maintenance manual. 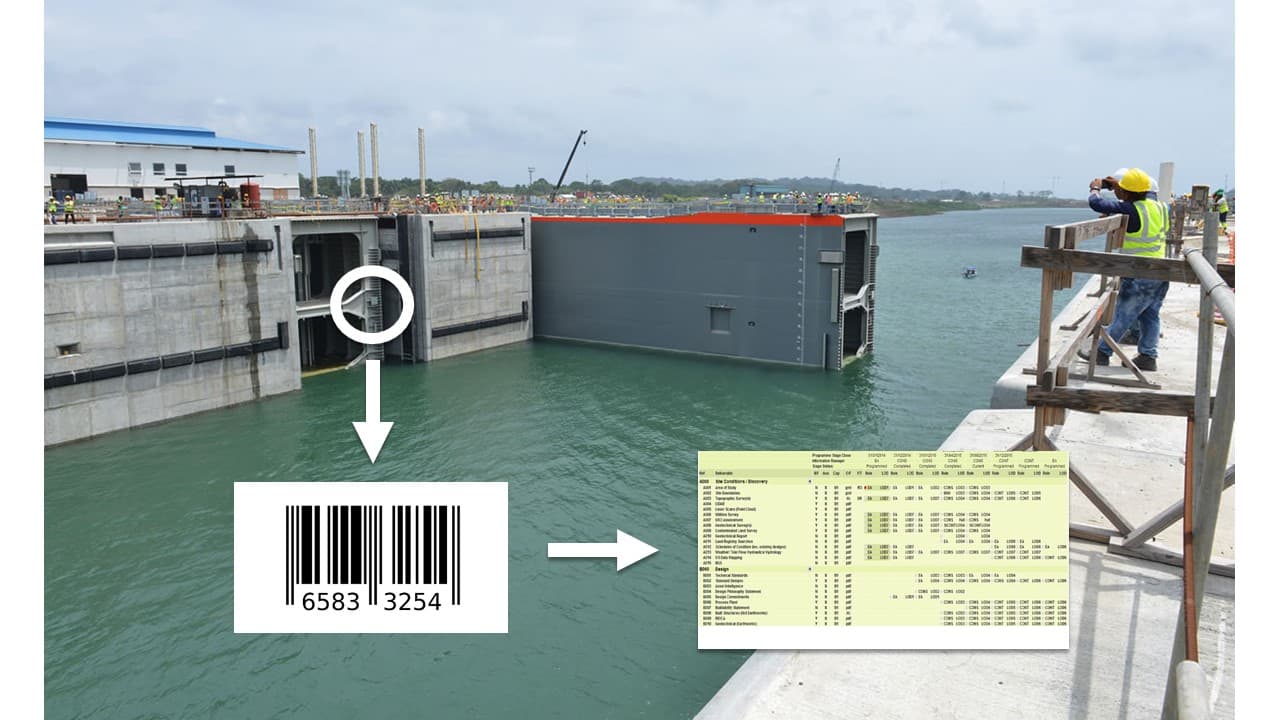 Above: A simplified impression of how ID tags allow the project team to capture and retrieve asset information (Background lock image courtesy of Canal de Panama).

These unique tags are like barcodes, enabling users to scan elements of the locks in the field and be presented with the digital data that relates to them.

“The project team will truly understand their asset and how it works, optimising its use”

The delivery phase is relatively short when you consider the life of the canal, which will span many decades. By ensuring that the rich data collated during design and construction can support the end-users facilities management (FM) approach, the canal will be able to operate with enhanced efficiency over time.

The users will truly understand their asset and how it works, optimising its use. When consider the importance of the Panama Canal to global trade, that optimal use really could benefit us all.

MWH Global believe they took significant steps forward in their design process by adopting BIM at Panama, and are already applying their learning to other major infrastructure projects. Indeed both the timing and scale of Panama’s Canal expansion have placed it on the leading edge of case studies for BIM in infrastructure.

You can find out more about the Panama Canal Expansion Project here.