Though we may take them for granted today, the advent of the elevator in the 19th Century transformed the way we live our lives.

Revolutionising building design, disrupting established conventions, shaping our cities and making our vertical world viable, elevator systems have continually helped engineers and designers raise the roof of structures – from the early skyscrapers of the 1800s to the incredible projects of today, that push the very limits of construction capability. 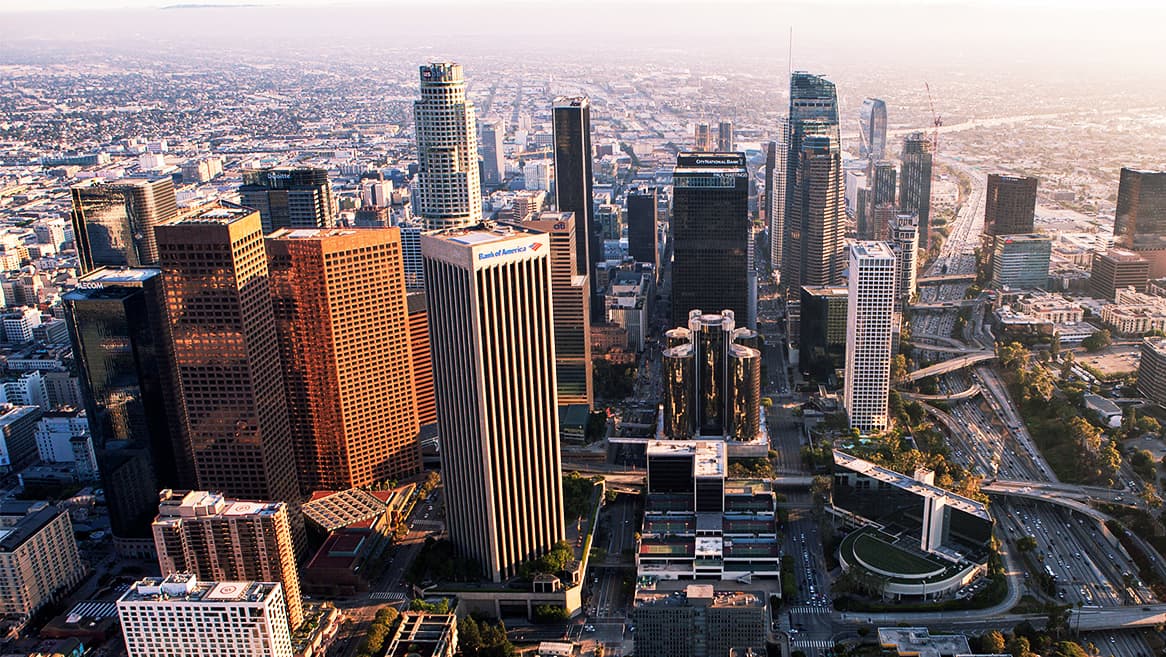 Above: Our vertical world was made possible, in part, by the elevator.

But what drove their original invention? How did the first elevators work? How have they evolved to support the extreme height of some of today’s most impressive projects and how will they support the vertical cities of the future?

Here, we explore the story behind a relatively simple innovation that is continuing to shape our world.

THE ADVENT OF THE ELEVATOR

With land more freely available and stairs as the only means of vertical access, there was little to drive the construction of high rise structures before the 19th Century.

As such, tall buildings were largely limited to military and religious structures that used their height for strategic or ornamental purposes.

The upper levels of buildings were widely deemed to be undesirable, while lower levels – with easy street access and few stairs to climb – were the preferred domain of wealthy residents and businesses alike. 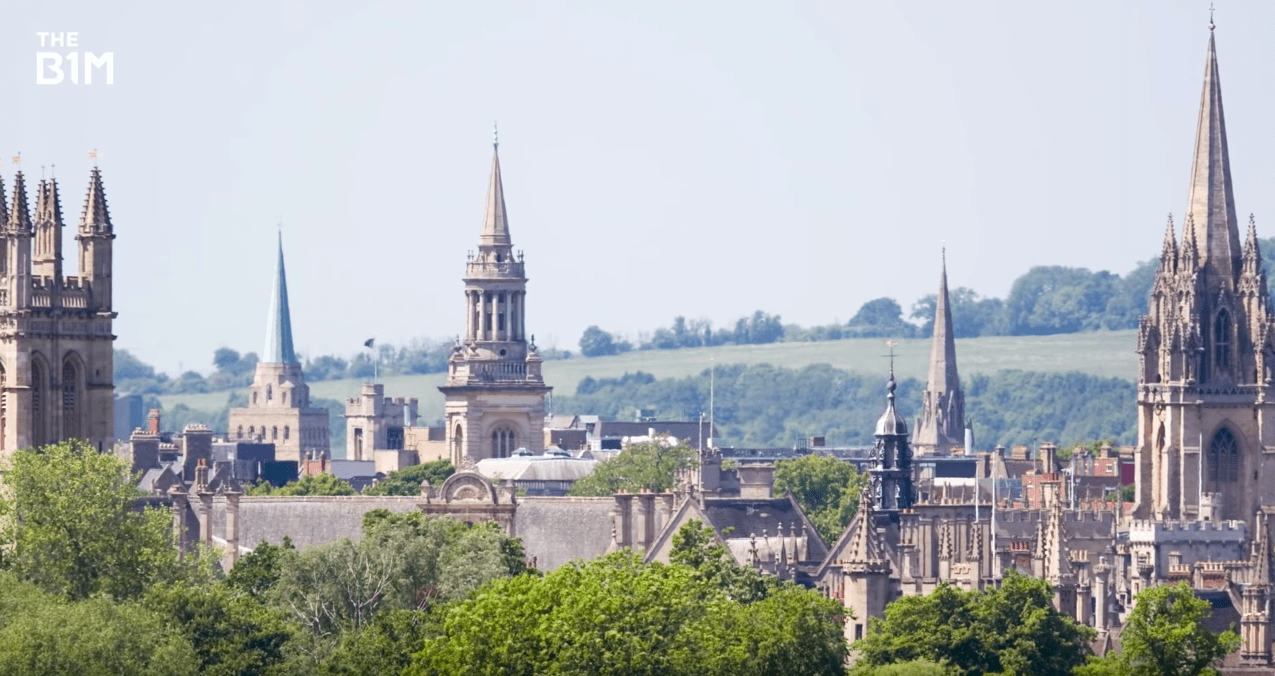 Above: Tall buildings were rare prior to the advent of the elevator and reserved for military and religious structures.

Additionally, the practice of building with external load-bearing walls caused structures to thicken at their bases as they grew taller, reducing floor area on these desirable lower levels.

With the dawn of the industrial revolution, urban areas began to grow substantially and the demand for space increased.

Though simple elevators had existed for many centuries, these early devices consisted primarily of a platform suspended by a rope and pulley system which was lifted by an animal or by manpower.

These devices were only used for moving individuals or goods over short distances due to their slow speeds and the risk they posed to human life in the event of a cable failure. 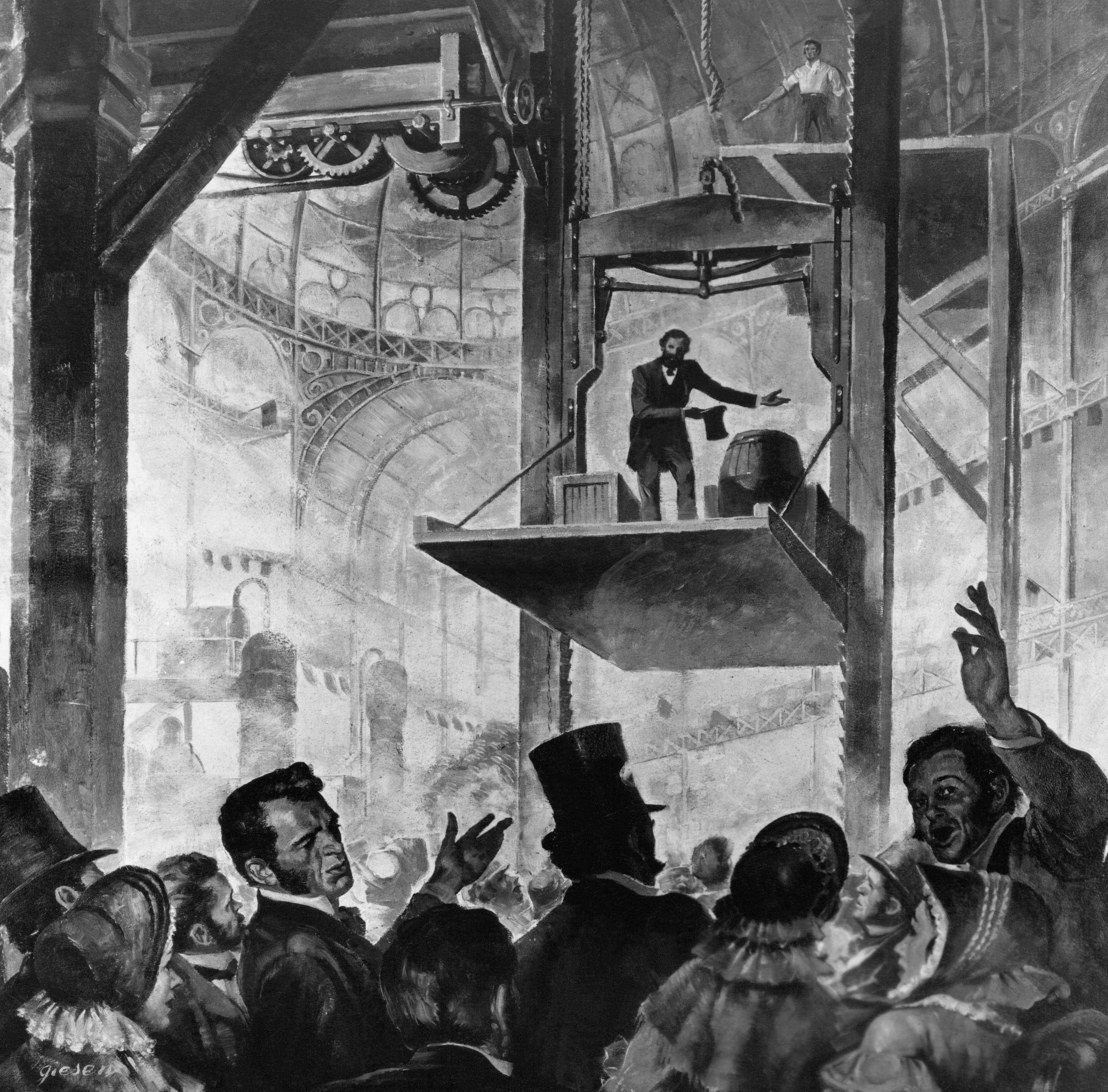 Above: Elisha Otis displayed his revolutionary invention in 1854 and changed the perception surrounding elevators.

At New York’s World’s Fair in 1854, Elisha Otis presented the world’s first vertical mobility platform capable of stopping, rather than falling, in the event of its main cable breaking.

Otis achieved this by designing his elevator with a mechanism between the cable and the elevator car consisting of two levers.

When the cable is under tension these levers retracted away from the sides of the elevator shaft and allowed the car to move freely.

However, if the cable broke – releasing its tension – springs behind the levers would force them outwards into grooves in the elevator rails, those rails were then forced against the shaft walls, quickly arresting any cars fall.

The success of Otis’ demonstration at the World’s Fair prompted a flood of orders from developers.

At the same time, architects and engineers were beginning to use steel in their building superstructures enabling projects to be constructed with thinner, more lightweight walls.

The combination of Otis’ invention, together with the increasing popularity of this new material began to have a transformative impact on building design, shattering the negative preconceptions around tall structures and opening up a new vertical frontier.

Above and Below: The elevator had a transformative effect on cities around the world. Pictured: New York City ( images courtesy of the Skyscraper Museum).

As the early boom in skyscraper construction occurred in the United States, elevators were also adopted in buildings of all shapes and sizes around the world.

In Paris, the construction of the Eiffel Tower for the 1889 World’s Fair presented unique challenges in moving people up and down the structure’s steeply inclined legs.

To overcome this, double-decker elevators powered by a hydraulic ram were installed. As the elevator car moved up the tower, an operator would adjust the pitch of the floor to ensure passengers remained horizontal.

Indeed, many of these early elevators were supervised by lift operators and primarily powered by steam or hydraulics.

Despite being developed and available to install from around 1900, fully automatic lifts proved widely unpopular as, rather like today’s driverless cars, the automated operation of such a sophisticated device was a cause of concern to many. 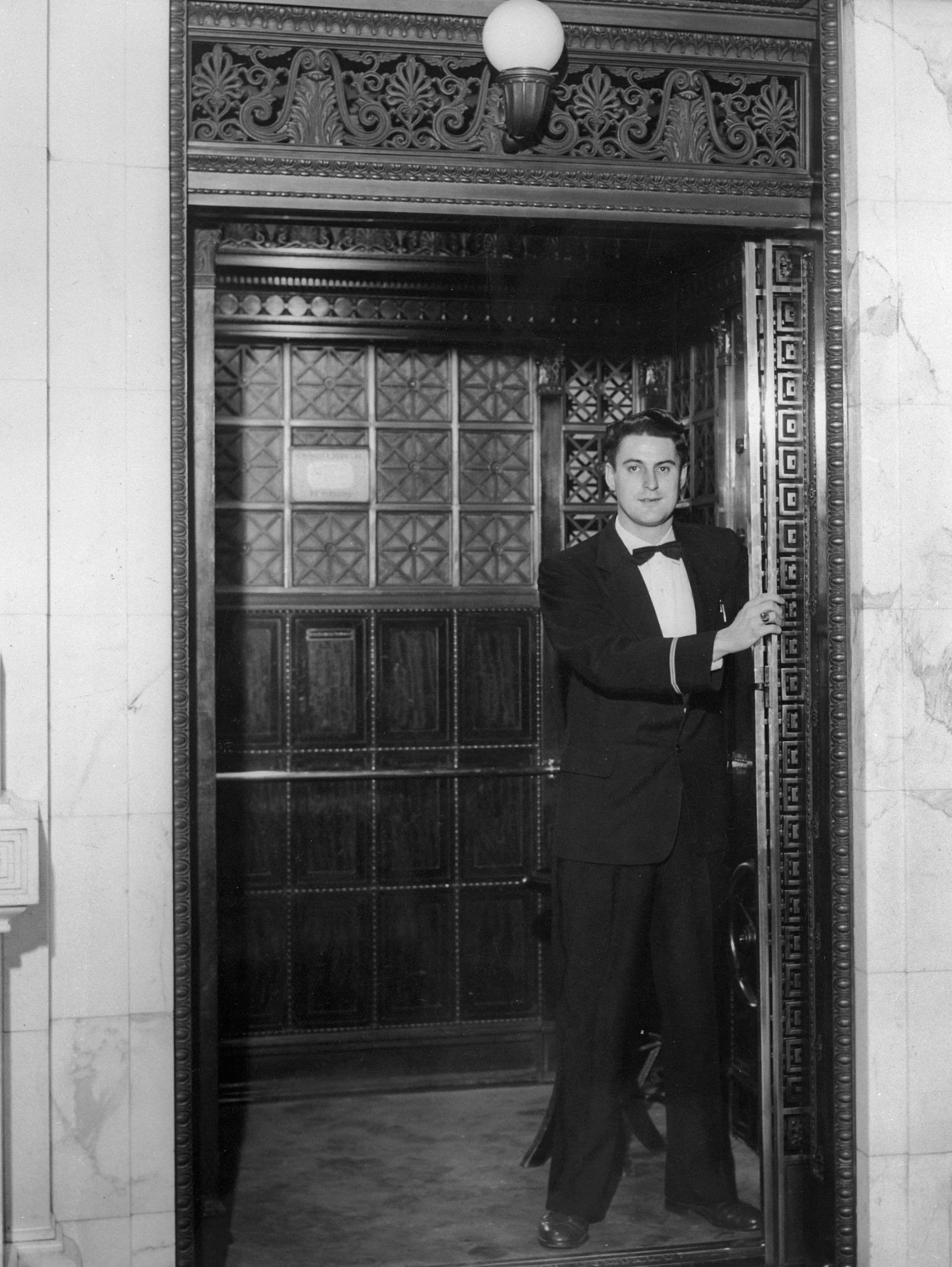 Above: Elevator attendants were commonplace until the mid 20th Century despite automatic elevators being available since the early 1900s ( image courtesy of Northwestern Mutual).

It wasn't until 1945, with an extended operator strike and the introduction of both emergency stop buttons and telephones within elevator cars, that automated systems became widely adopted.

Seattle’s Space Needle was constructed for the 1962 World’s Fair, while in St Louis the 192-metre “Gateway Arch” was erected, marking the city’s status as the gateway to the west.

Chosen from a design competition in 1947, the arch was to contain an observation deck at its summit – posing a considerable challenge to conventional elevator systems. 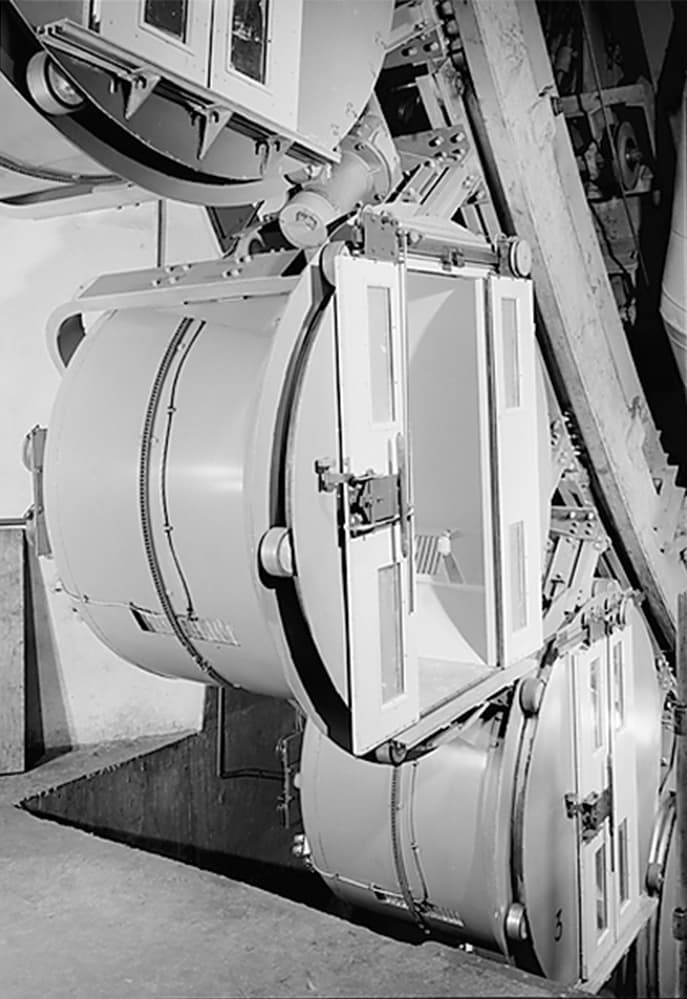 Above: The elevators of the Gateway Arch, in St Louis, operate like vertical tramway with rotating capsules suspended from tracks ( image courtesy of Collins Cooper Carusi Architects).

The arch’s solution operates more like a vertical tramway, with visitors entering one of eight horizontal compartments which proceed up one leg of the arch along curved tracks.

Starting the journey hanging from guide rails, the capsules remain upright by tilting in the opposite direction as they rise, maintaining a level orientation during the trip to the top.

The first half of the 20th Century also saw Paternoster elevators installed in many structures. Formed of a constantly moving chain of boxes that passengers could step in and out of – the systems were initially very popular in buildings where large numbers of people frequently moved between floors.

However, with elevator cars moving very slowly and numerous instances of passengers becoming crushed or losing limbs, Paternosters were phased-out by the 1970s and less than 300 examples remain in operation today.

With an economic boom in the 1960s, demand for space in some of America’s largest cities once again increased.

While building taller structures on available sites was a logical way to increase floor area, architects and developers faced the challenge of providing sufficient vertical access for occupants without the increased number elevator shafts reducing lettable floor areas to the point where schemes became unviable.

Above: The original World Trade Center was made viable by elevator shafts being stacked, creating for more floorspace on the upper levels.

This challenge was overcome in designs for New York’s original World Trade Center towers; structures that became the tallest buildings in the world when they were first constructed in the early 1970s.

By stacking elevator shafts and introducing “sky lobbies” passenger capacity could be increased without increasing the number of shafts on the floor plate.

Under this system, occupants would disembark at a sky lobby floor, before entering another elevator to continue their journey. 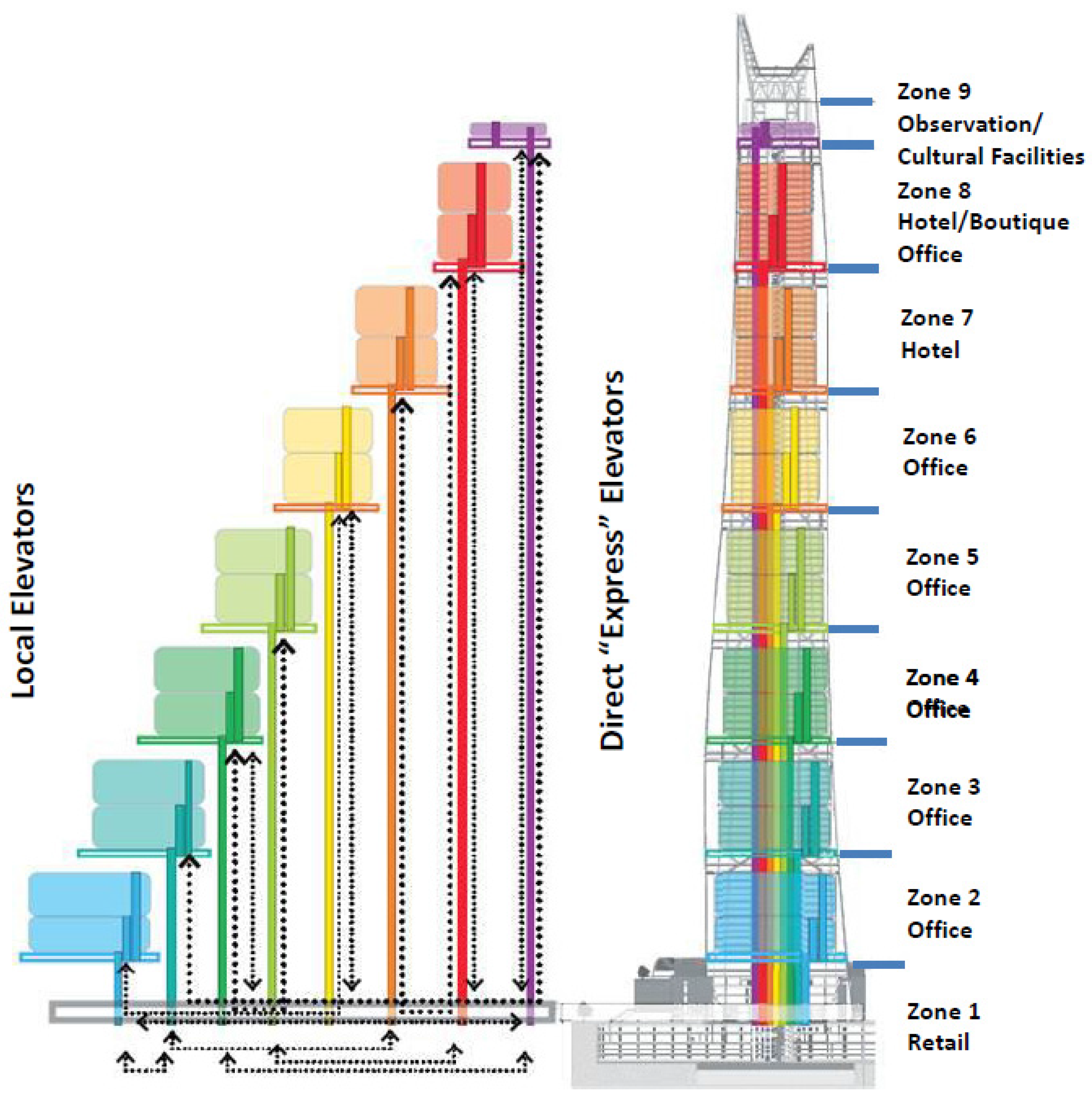 Above: Express elevators that only service certain floors allowed buildings to rise even taller (image courtesy of Gensler).

A variation of this system can be seen in “express elevators” – where an elevator only serves a dedicated number of floors, improving service and speed for passengers while reducing the overall number of shafts required in a structure.

The system in London’s One Canada Square, is a clear example of this in practice.

In a similar vein, double-decker elevators have also come to prominence, particularly in cities across Asia and North America.

In a double-decker system, occupants are typically separated by escalators as they enter the lobby. Those heading to even numbered floors travel in the upper car, while those seeking an odd numbered floor taking the bottom.

With the advent of these elevator systems, and with their continued improvement over time – the fastest installations now able to travel at up to 20 metres a second, and the free-fall of cars an almost impossible occurrence – working or living a quarter of a kilometre above street level has become a convenient reality in cities around the world.

ASCENDING TO THE FUTURE

With the global population continually expanding, and with people increasingly living in cities or major urban areas, engineers are today pushing the very limits of tall building design.

The first decades of the 21st Century have witnessed the construction of some of the tallest structures ever conceived.

While the finishes, speed and safety features of elevators continue to be improved and have generally kept pace with the advancements in skyscraper construction, the principal of an elevator car, suspended by a cable and moving vertically inside a static shaft has remained largely unchanged for over 160 years.

With plans for a number of towers that will reach or exceed a kilometre in height now under consideration and even entering early development in some instances, elevator engineers are approaching the limits of steel cable capabilities and are being forced to innovate once again. 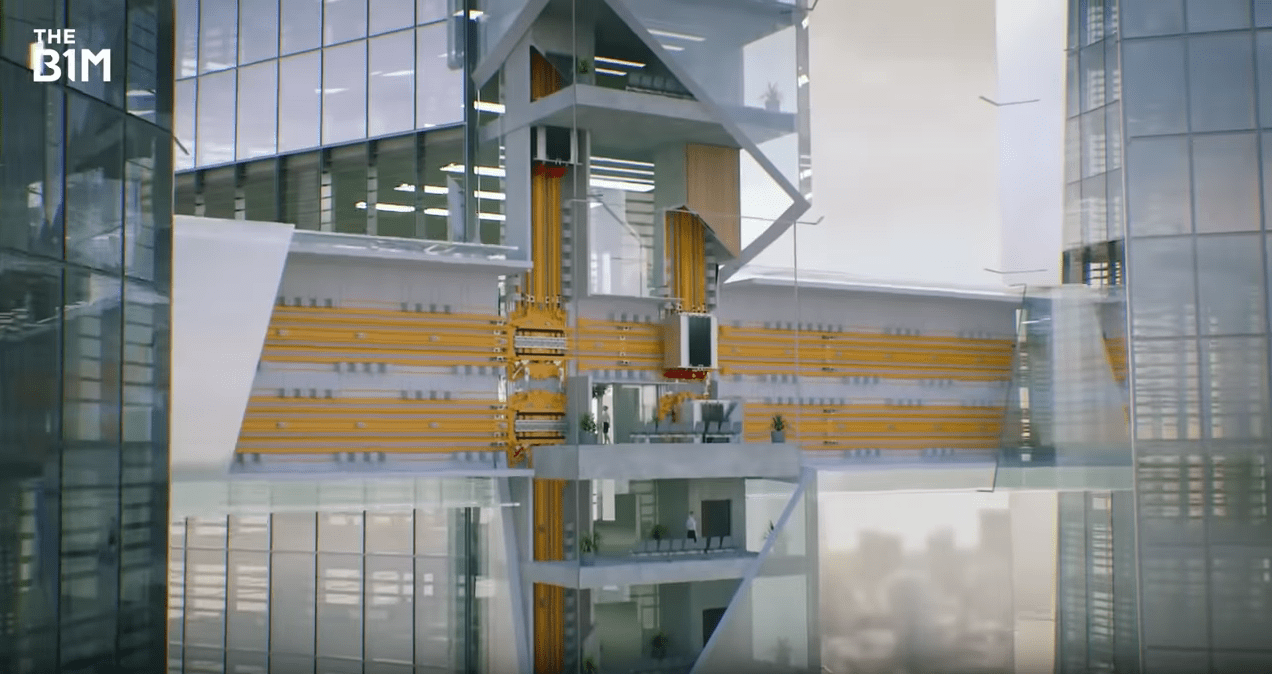 Above: Electromagnetic techniques can free elevators from the limits of steel cables and can allow for horizontal movements (image courtesy of ThyssenKrupp).

Electromagnetic elevators, rather like maglev trains, move their passenger cars by electromagnetic propulsion, negating the need for a cable altogether whilst being able to travel at increased speeds and with reduced vibration. They have also created an opportunity for elevators to move horizontally through a building.

Developed by ThyssenKrupp these “horizontal elevators” run on tracks and are capable of moving up and down, as well as sideways across a building.

This method enables a continuous flow of elevator cars to operate within a single shaft, with all cars travelling in the same direction without fear of collision.

While no functional system of this type currently exists, the East Side Tower project in Berlin is set to become the first project in the world to feature this technology when it completes in 2021. 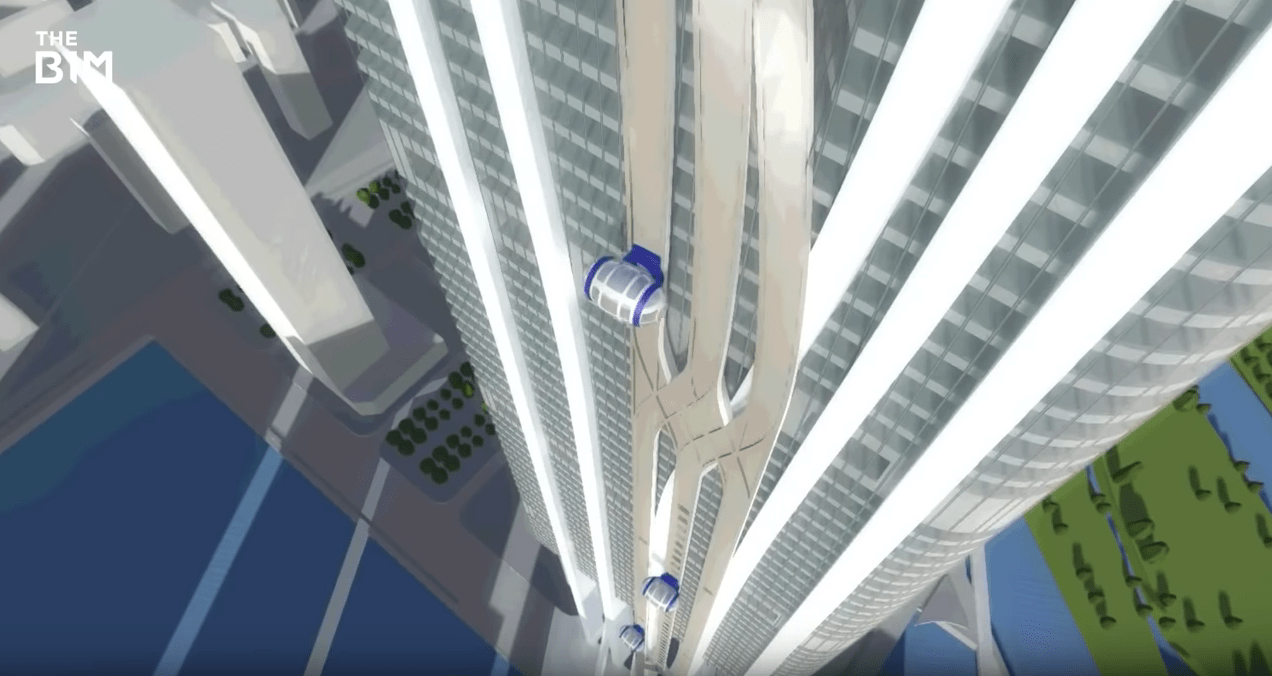 Above: "Skypods" could operate on the exterior of buildings (image courtesy of PLP Architecture).

“Skypods” conceived by PLP Architecture also employ magnetic levitation, but with passenger cars mounted to tracks on a building’s exterior.

This system would operate in a similar way to a rail network, with tracks curving across a building’s façade and branching-off to reach destinations where required before returning to the main loop.

As cars move around a structure, their occupants would remain upright through the use of a gyroscope.

Despite making for a potentially terrifying experience, this concept could liberate engineers and designers from the existing conventions of vertical design and see a new generation of freeform towers appear across our cities.

From their humble beginnings, elevator systems have continually played a critical if somewhat understated role in shaping the world we live in, and with such incredible innovations ahead, their seemingly perpetual upward journey looks set to continue into the future.