Buildings of the Winter Olympics: PyeongChang 2018

THE 2018 Olympics hosted in PyeongChang, South Korea, will be the largest-ever winter Games with athletes from more than 80 nations competing across 102 events. A total of 12 venues will stage the spectacle, with six existing facilities being refurbished and six being constructed from scratch.

These will be the second Olympics to have been held in South Korea – with Seoul hosting the summer Games back in 1988 – and the first of three successive Games to be held in Asia, with Tokyo following in 2020 and Beijing hosting the Winter Olympics in 2022. Compared to the efforts of the recent host cities of Rio in Brasil and Sochi in Russia, preparations for PyeongChang have been a model of efficiency, with the majority of venues completed six months before the Games. 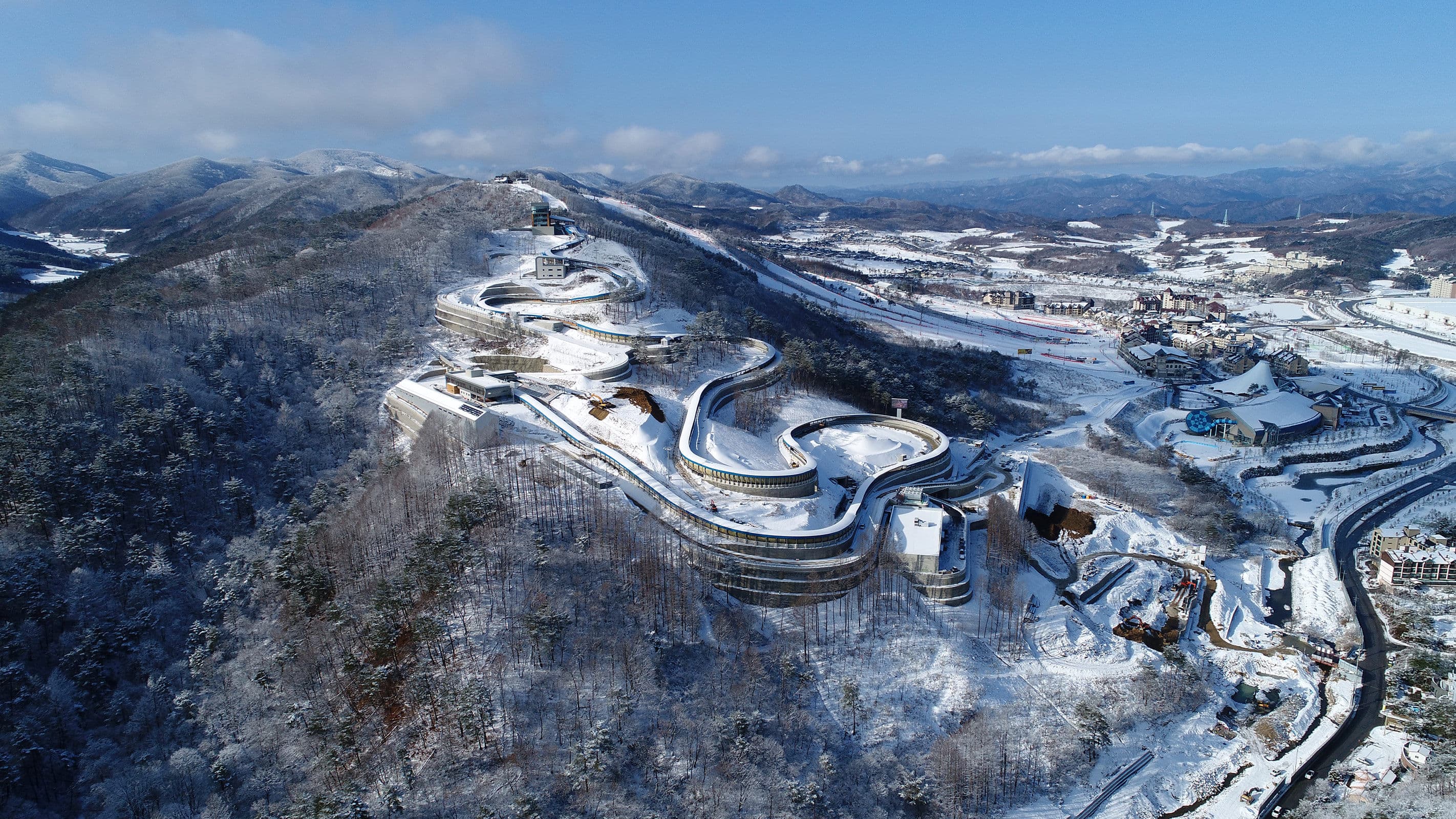 Above: The outdoor sports will be hosted at the Alpensia Resort on the PyeongChang Mountain (image courtesy of Pyeongchang 2018 Organising Committee).

The events are gathered around two main veunes. The PyeongChang Mountain cluster, focused on the Alpensia Resort, will host outdoor sports, while the coastal city of Gangneung, some 20 kilometers east of the mountain, will host indoor sports.

At the heart of the Games will be the PyeongChang Olympic Stadium; a temporary venue that will seat 50,000 people for the opening and closing ceremonies. The USD $78M pentagonal arena will also host medal ceremonies. 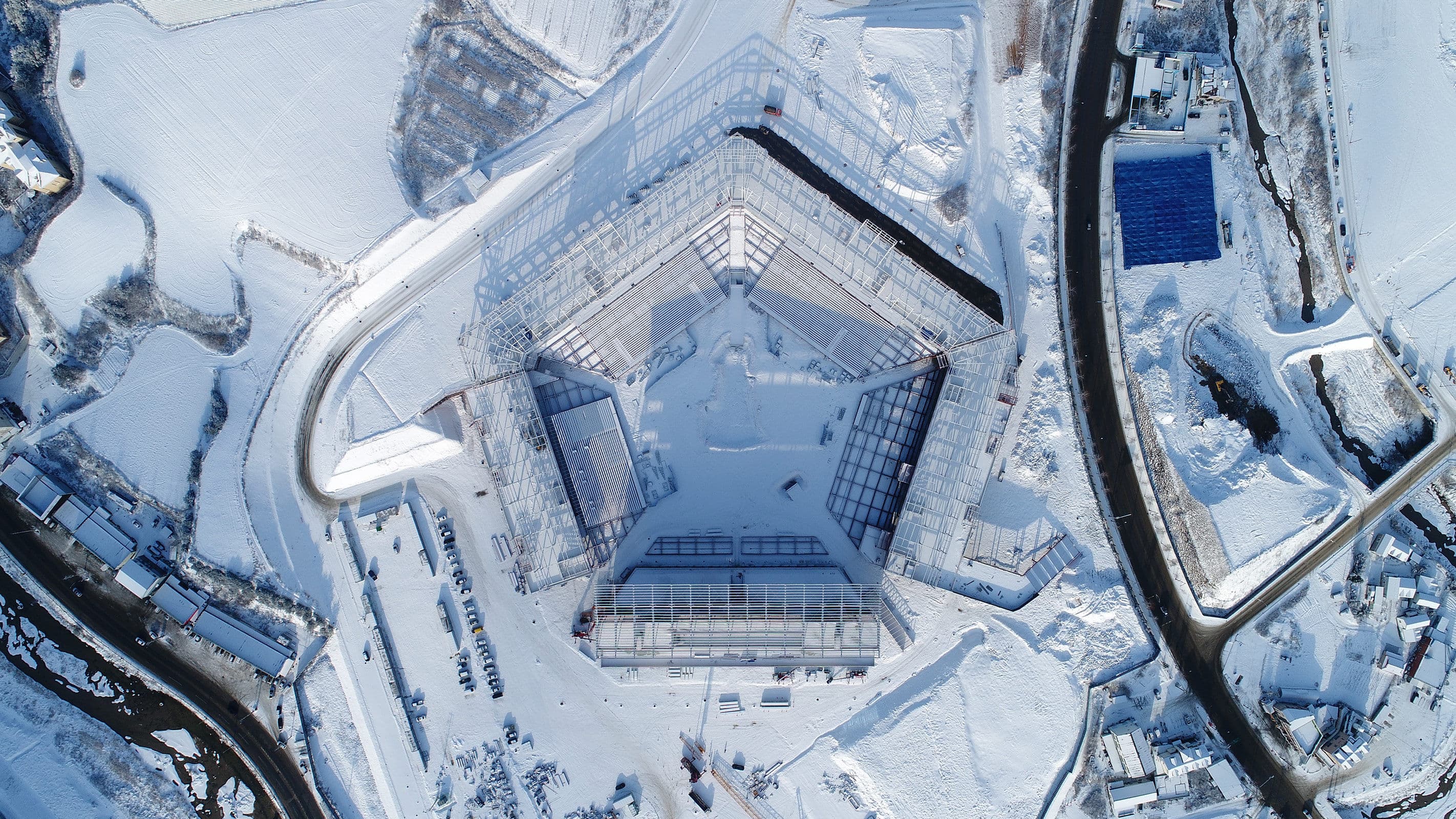 After the Games, the stadium will be dismantled. Although this is unusual for a main Olympic Stadium, a similar temporary facility was used during the 1992 Winter Olympics in Albertville, France. Critically this means that after the games PyeongChang will not be left with an expensive white elephant that would be potentially unsuitable for such a small resort.

One of the main venues at the PyeongChang mountain cluster, the Alpensia Ski Jumping Centre was originally planned as a spectacular venue for the opening and closing ceremonies. 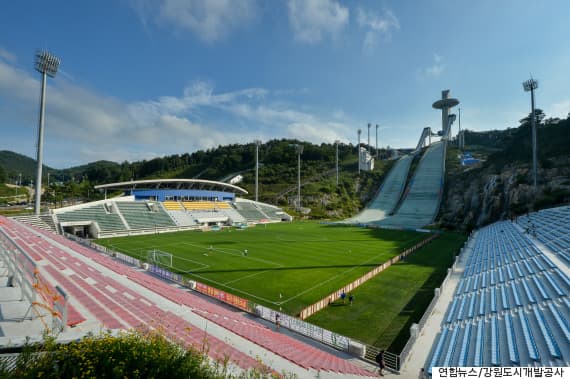 Above: Unusually the ski jumping arena also doubles as a football pitch.

Built in 2008, in anticipation of winning the rights to host the Winter Olympics, the 11,000 seat venue will host the ski jumping and the Nordic combined events. As the landing area for ski jumpers is approximately the same size as a football pitch, the venue has also been designed for football in the summer months, making this perhaps one of the world’s strangest football stadiums.

The USD $114.5M Alpensia Sliding Centre is one of the six venues purpose built for the games. The centre, that will host the bobsleigh, luge, and skeleton events, can accommodate 7,000 spectators. The track has been constructed 2,018 meters long – commemorating the year of the Games (see more in our video at the top of the page).

While construction of the venues has progressed on time - avoiding the controversy that over shadowed the build-up to both Rio and Sochi - the choice of location for one venue has been extremely controversial. The "Jeongseon Alpine Centre" is a new ski slope that will be home to the alpine speed events of downhill, Super-G and combined. 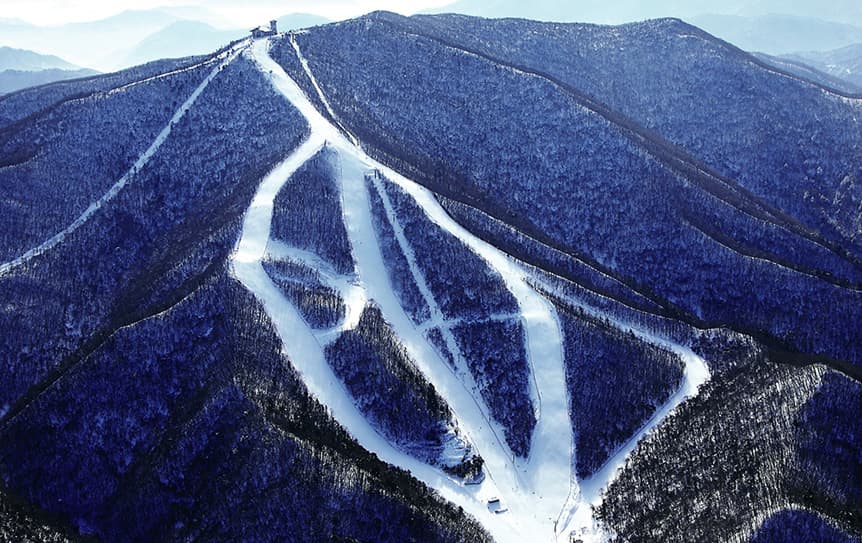 Above: Controversially, the downhill, Super-G and combined will take place at the Jeongseon Alpine Centre (image courtesy of PyeongChang 2018 Organising Committee).

The course is located in a 500-year-old protected forest on Gariwang Mountain; the only location in the region that could meet Olympic requirements for a vertical drop of 2,600 feet (800 meters). To allow the development to happen, the Korea Forestry Service controversially removed the mountain from its list of protected forestland.

To minimize the damage to Mount Gariwang, the men's and women's courses have been combined into one field for the first time at a Winter Olympics.

In Gangneung some, 20 kilometers east of the PyeongChang Mountain Cluster, three new venues are being constructed for the games. With ice hockey making up an incredible 40% of the total ticket sales at a typical Winter Olympic Games, the most popular of these will undoubtedly be the Gangneung Hockey Centre. Costing USD $90M, this is the first arena to have been specifically designed and built for ice hockey in South Korea. 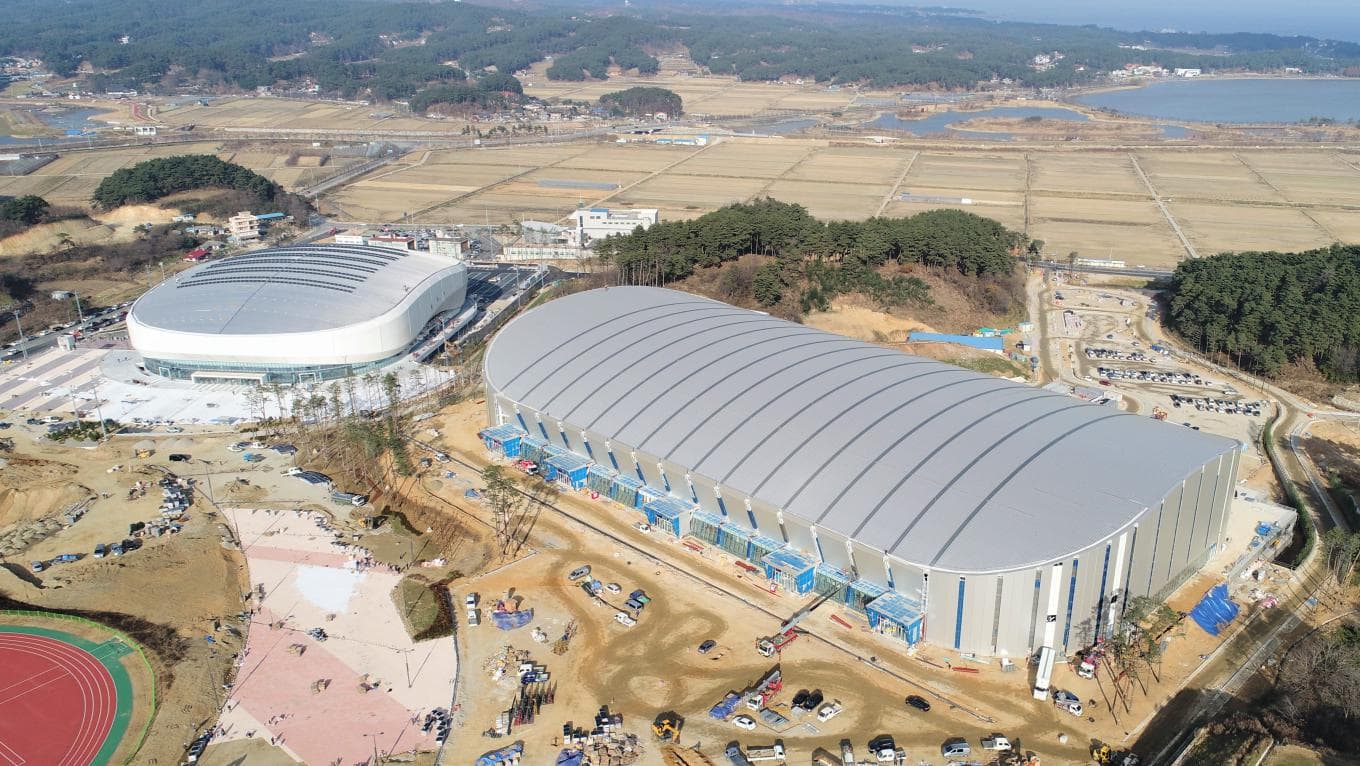 Above: The indoor sports will take place in the city of Gangneung, 20kms from the mountain cluster (image courtesy of PyeongChang 2018 Organising Committee).

With a capacity of 10,000, the venue is designed to give spectators an up-close and personal experience with the audience just 1.6 meters away from the rink.

A key part of Gangneung’s strategy to become a winter sports destination after the Olympics, the Ice Arena will be the venue for short track and figure skating during the Games.

The arena has a capacity of 12,000 with an air maintenance system that keeps the spectators' area at a temperature of 59 Fahrenheit and 40 percent humidity. This system can also control the temperature of the ice rink surface so that the venue can stage both figure skating and short-track events on the same day.

The third purpose built venue in the Gangneung grouping, the Oval will host speed skating competitions during the Olympics. Effectively a giant shed, the building will be the largest pillar-less structure in South Korea, offering 7,635 spectators uninterrupted views of the action. 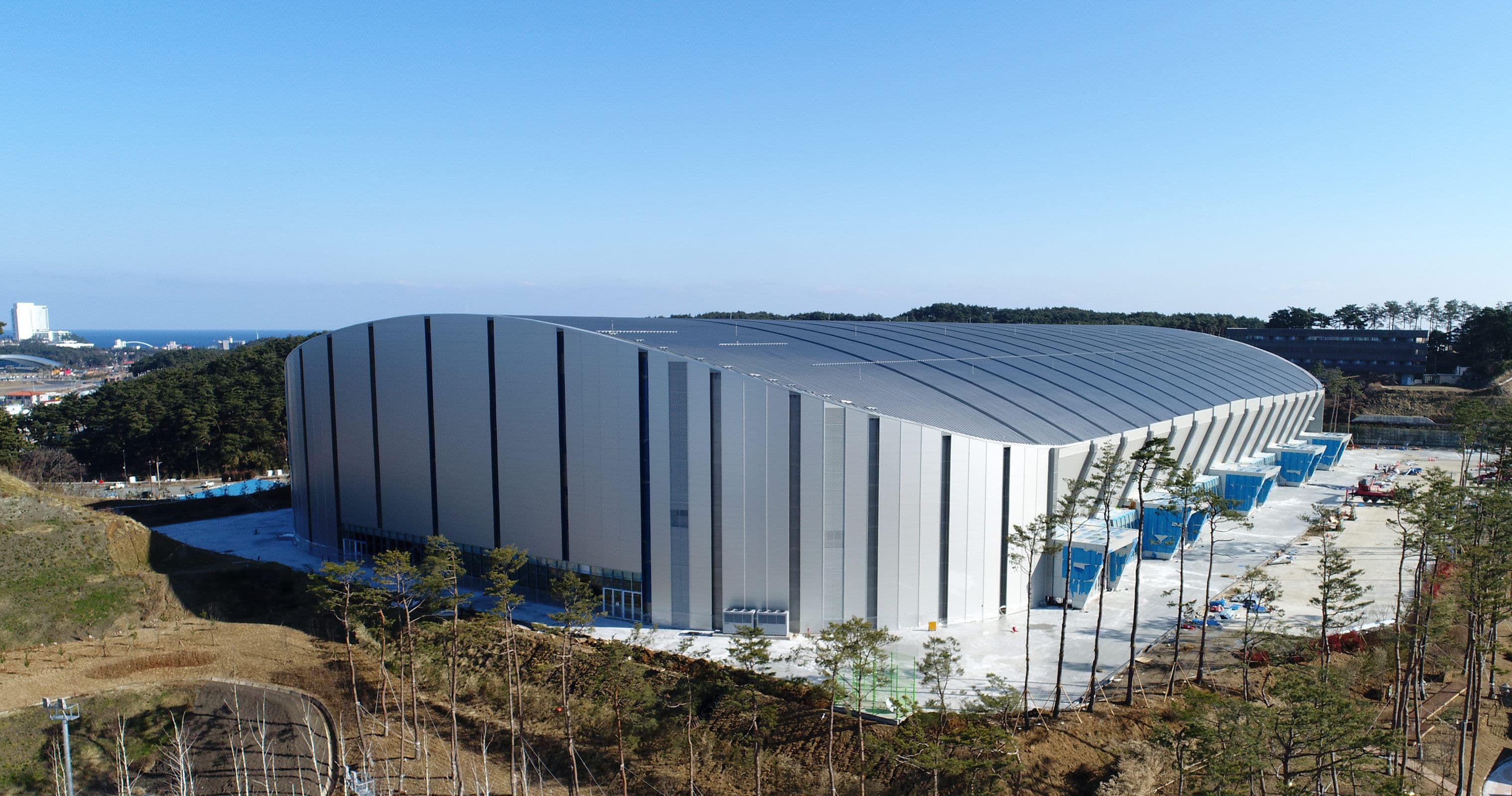 Above: Built for the Games the speed skating arena is the largest pillar-less structure in South Korea
(image courtesy of PyeongChang 2018 Organising Committee).

Aware of the extremely high costs of previous Olympics, the budget for PyeongChang has been tightly controlled with the event set to cost an estimated USD $10BN; a fraction of the eye-watering USD $50BN spent by Russia on the Sochi Games.

Unfortunately for architecture fans, this frugalness is reflected in the unambitious pragmatic architecture of the venues. However, if the Games are run as efficiently as the construction, PyeongChang looks set to be an extremely successful Olympics.

Images courtesy of Jeon Han and PyeongChang 2018 Organizing Committee. We welcome you sharing our content to inspire others, but please be nice and play by our rules.