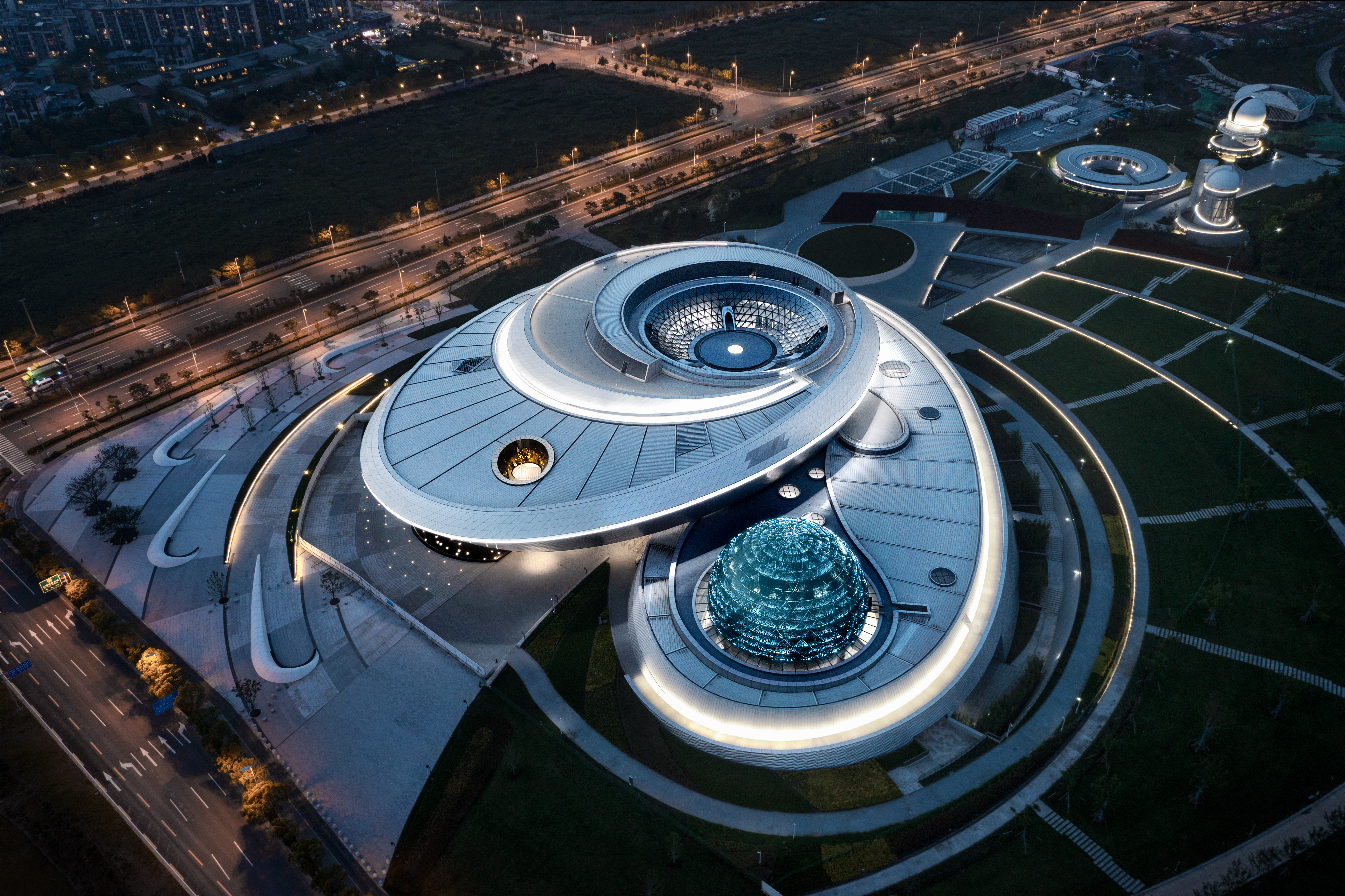 Inside are exhibition spaces, an observatory, a 23-metre solar telescope and more.

Designed by American firm Ennead Architects, the competition-winning concept has drawn international attention not just for its size but for one daring architectural decision: there is not a single straight line anywhere in the building.

The structure is instead made from three overarching circles whose form is inspired by the orbits of the stars and planets.

These three circles then divide the building into its three main components: the Oculus, the Inverted Dome and the Sphere. 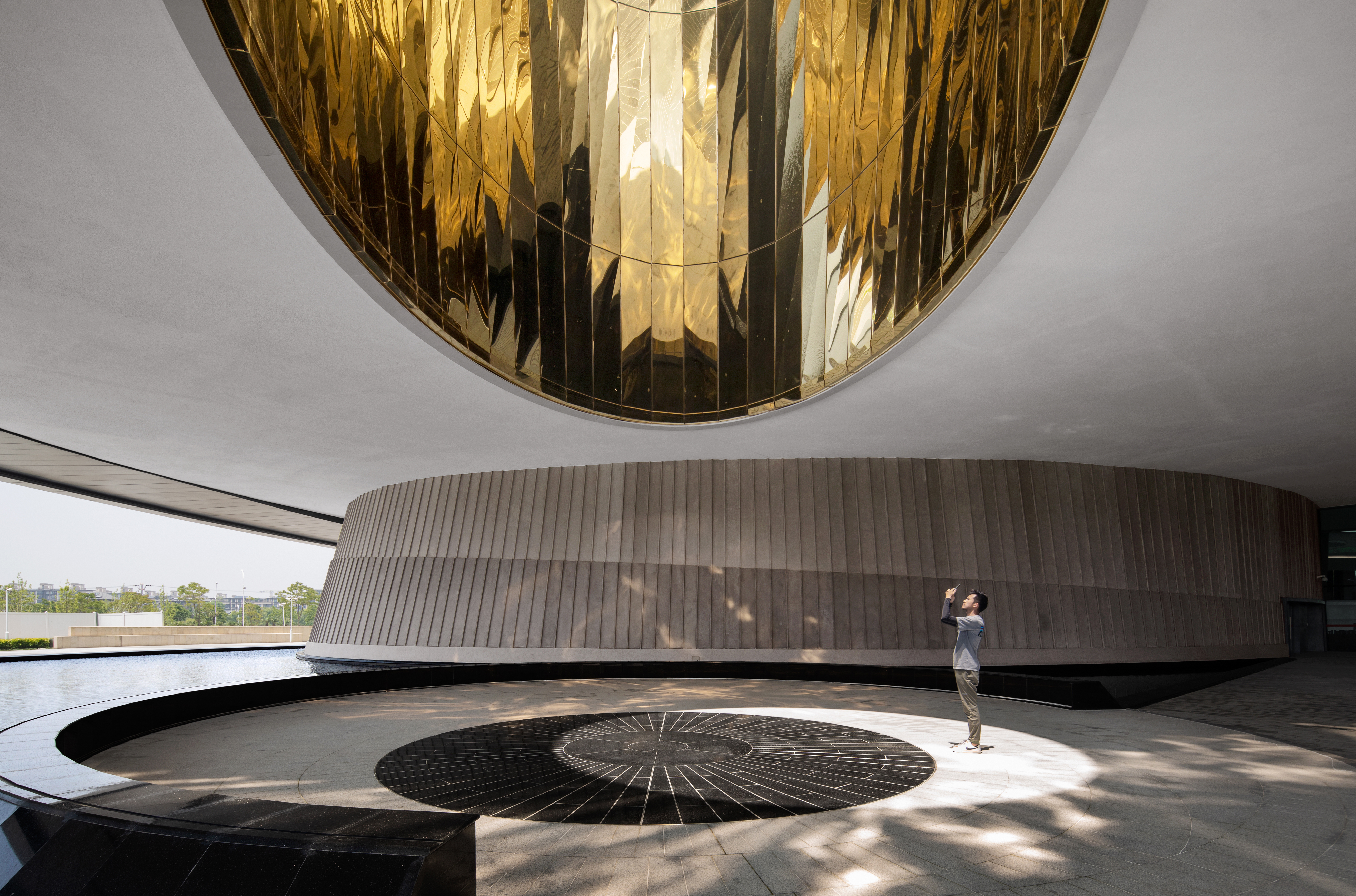 Above: The Oculus marks time via a circular opening that allows sunlight in. Image courtesy of Ennead Architects, photos by ArchExists.

The Oculus is suspended above the main entrance and tracks the passage of time through an opening that allows a small circle of sunlight to trail across the plaza and reflecting pool over the course of the day.

The Sphere is where the main planetarium theatre is, which is half submerged into the building. It's meant to evoke the weightlessness of space and the primordial shapes of the universe.

The Inverted Dome is a large glass structure that sits on top of the central atrium allowing visitors to have an uninterrupted view of the sky.

Visitors then leave the museum by a spiralling ramp through the dome, taking them into the real universe outside after the simulated experience within. 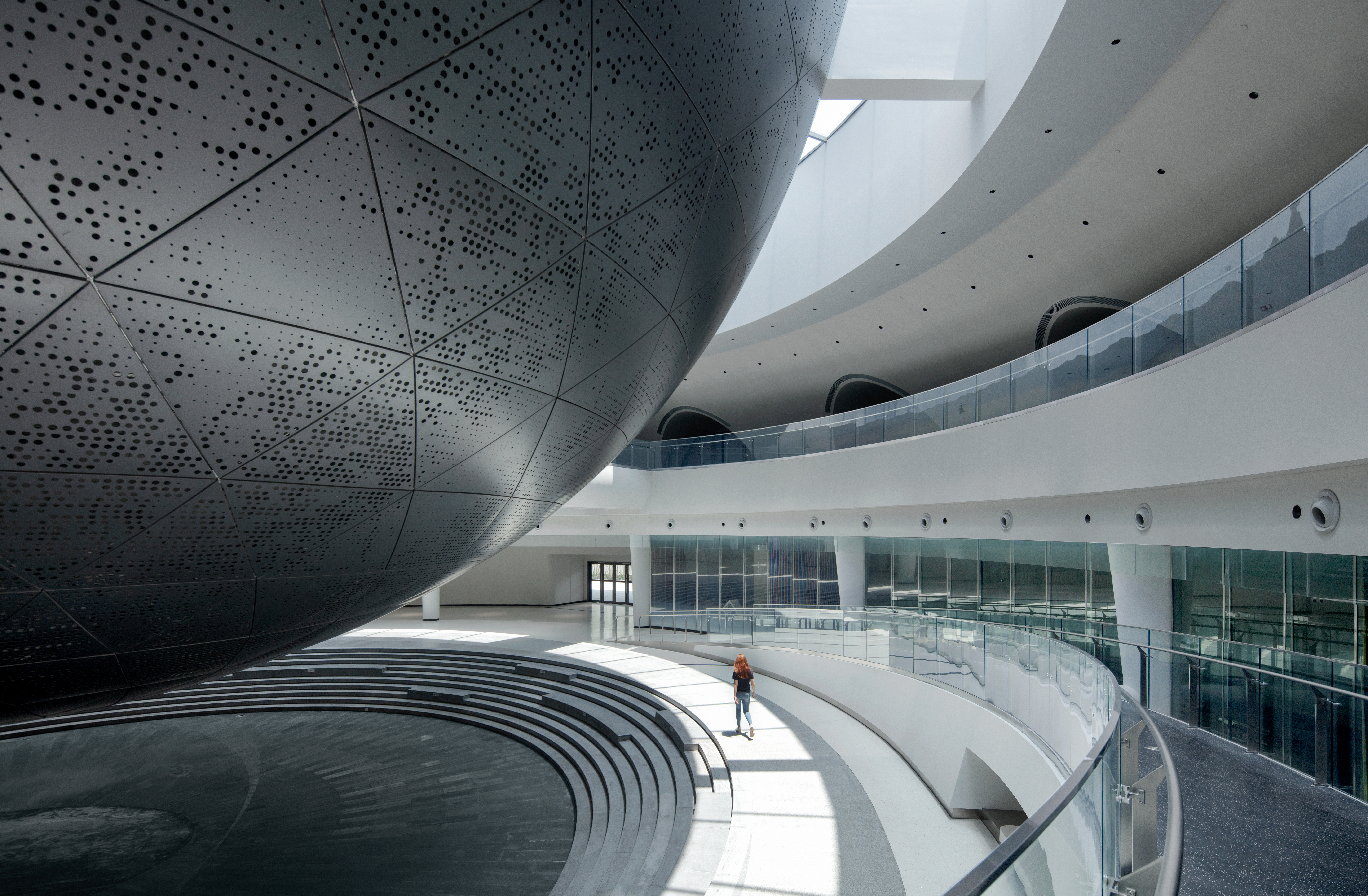 Above: The Sphere holds the planetarium theatre. Image courtesy of Ennead Architects, photos by ArchExists.

"We really thought that we could leverage the architecture to bring incredible impact to this whole experience," explained lead designer and partner Thomas J. Wong.

"The building is meant to be this embodiment of ... astronomically inspired architecture."

Moving through the museum visitors are reminded of the constant motion of the universe; this is further heightened by the manipulation of light and the sheer scale of the structure.

Visitors walk around the building in much the same way the earth orbits the sun: circular, continuous, and always forwards. 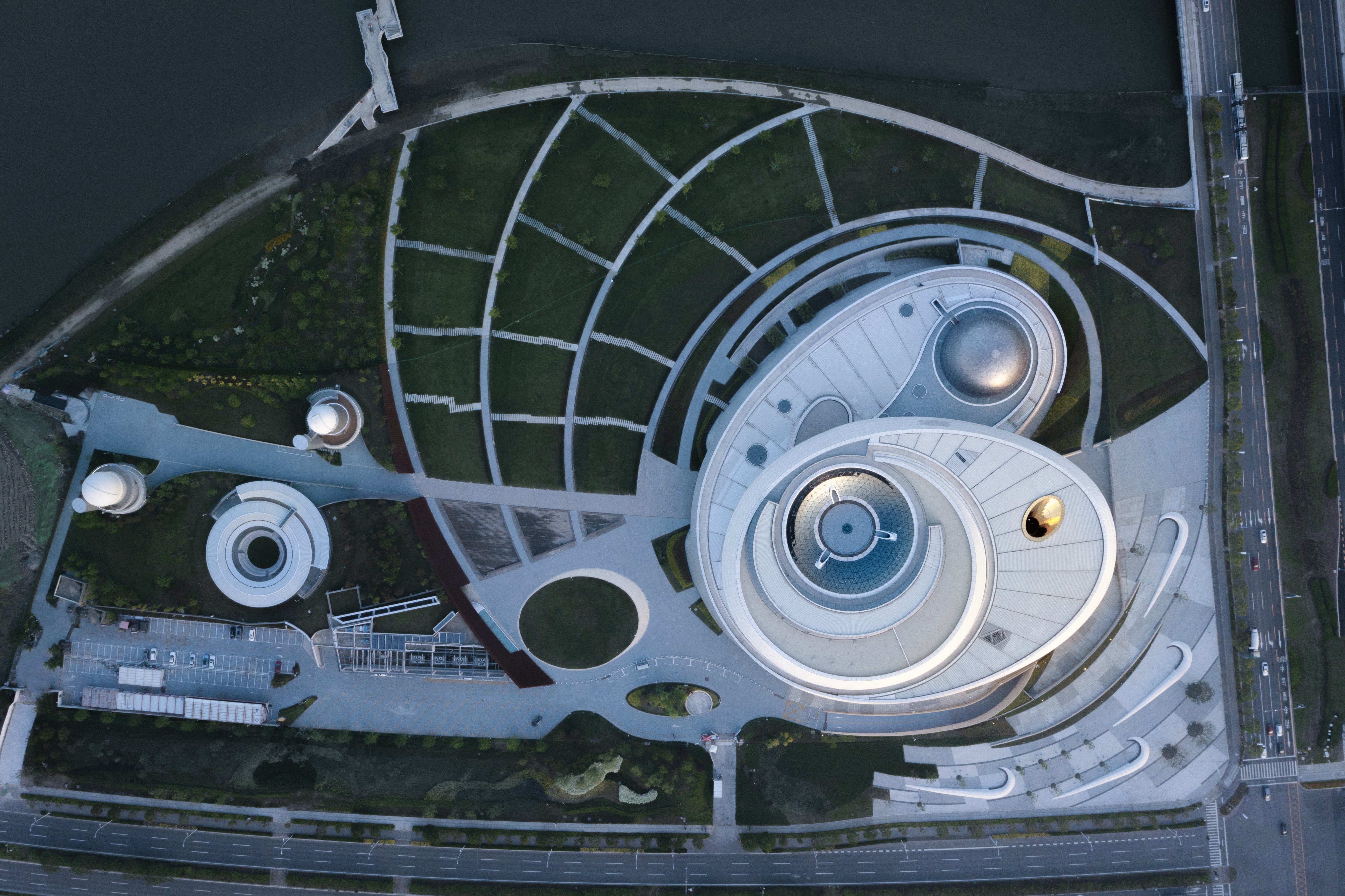 Above: The building's form is made of three overlapping circles. Image courtesy of Ennead Architects, photos by ArchExists.

“In linking the new Museum to both scientific purpose and to the celestial references of buildings throughout history, the exhibits and architecture will communicate more than scientific content: they will illuminate what it means to be human in a vast and largely unknown universe,” Wong continued.

Wong and his team also drew inspiration from “the three-body problem”, a famously unsolved mathematical problem that involves calculating the motion of three celestial bodies orbiting each other.

While it is easy to calculate two-bodies, when a third is added their pathways become chaotic and unknowable. 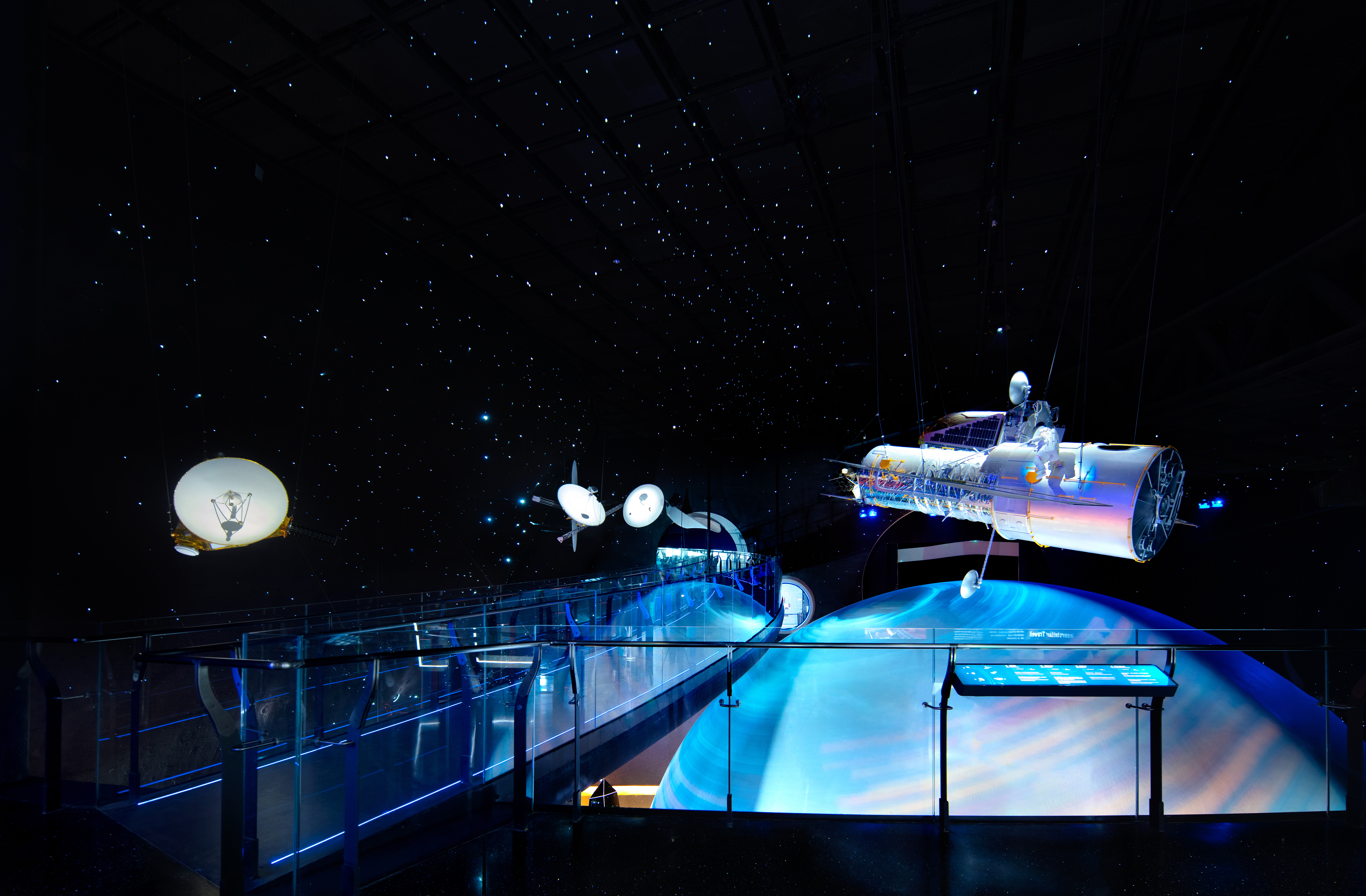 Above: Visitors move through the museum in long arching pathways. Images courtesy of Ennead Architects, photos by ArchExists.

This problem is also the inspiration for the modern Chinese science-fiction classic of the same name - an internationally successful novel that has inspired interest in Chinese astronomy again.

"The reason why we thought the three-body problem was interesting is because it's a complex set of orbits, (these) relationships that are dynamic, as opposed to a simple circle around the center. And that was part of the (our) intent - to capture that complexity.”

The museum is just one of a number of major new cultural facilities opening throughout China. Shenzhen has also announced it will build a state-of-the-art science and technology museum as well as a dramatic waterfront opera house.