IN TODAY’s world of air travel and high-speed land transportation, it’s easy to forget that just two centuries ago our planet felt like a much larger place.

Since the industrial revolution, humanity has constructed countless projects to connect people and cut journey times, driving economic growth that has transformed the way we live.

Opening isolated regions, linking entire continents and bringing billions of people closer together, these construction projects have quite literally shrunk our world.

The 1800s was an extraordinary period of westward expansion in the United States (US).

To better incorporate and unify the western states added to the Union, the world's first transcontinental railway was proposed; better connecting the east coast with the west and opening up inland regions to increased settlement.

Beginning at the western edge of the eastern railway network in Omaha, Nebraska the Pacific Railroad would run for over 3,000 kilometres to Alameda in California, transversing the Sierra Nevada and significantly reducing the time taken to cross the continent. 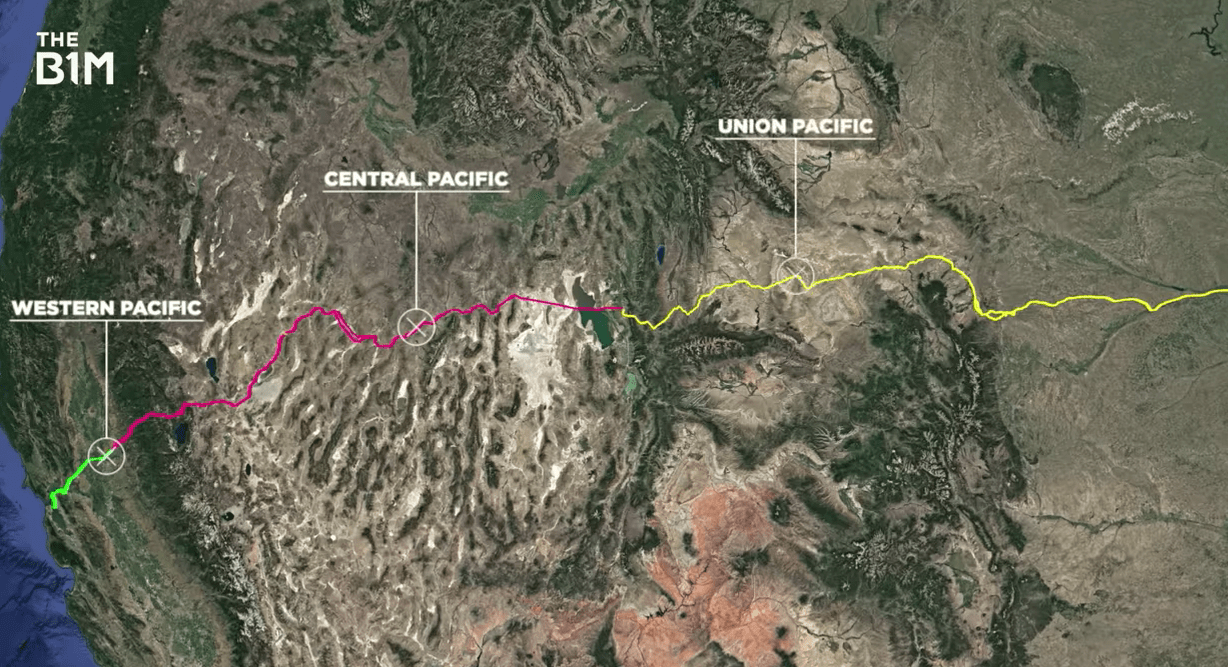 Above: The three sections that made up the Pacific Railroad (image courtesy of Google Earth).

The ongoing American Civil War saw construction by the Union Pacific Railroad Company delayed as they fought their own battles for workers and resources that were continually diverted, during and after the conflict, to repair and maintain existing Union railroads.

With the bulk of America’s factories located in the eastern states and with no practical means of transportation heading west, much of the equipment and supplies for the Western and Central Pacific sections of the project needed to be transported by ship from East coast ports. 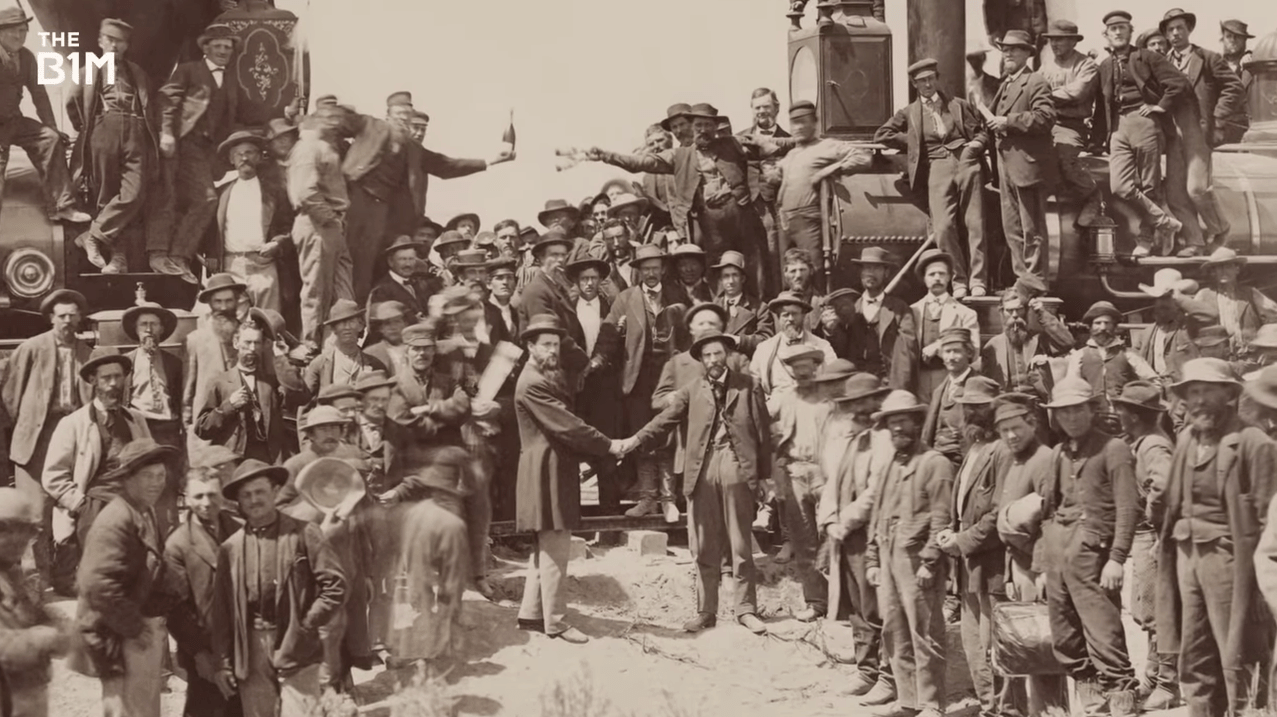 With the opening of the Panama Canal still more than 50 years away, ships carrying cargo to California were forced to make a 200-day journey around Cape Horn on the southern tip of South America.

High priority cargo was shipped to Panama’s Atlantic coast before travelling overground on the Panama Railway to the Pacific coast and continuing onto California via paddle steamer, a journey that took 40 days.

After six years of construction, the Union and Pacific railroads met at Promontory Summit, Utah on May 10, 1869.

For the first time in history, a continent was united from coast-to-coast via rail, reducing travel time from six months to just six days and revolutionising the development of the American West.

Just as the Suez Canal cut the travel distance between Europe and Asia in the late 1800s, shortening the journey to the Pacific coast of the Americas had long been a vision for colonial powers.

France first embarked on the Panama Canal project in 1881 with the goal of creating a sea-level canal across the 82-kilometre isthmus of Panama.

However, with the terrain of Central America proving hostile to engineering efforts and with worker mortality rates running high, the project was abandoned just three years later and works remained idle until 1904 when the US took up the challenge of completing the canal. 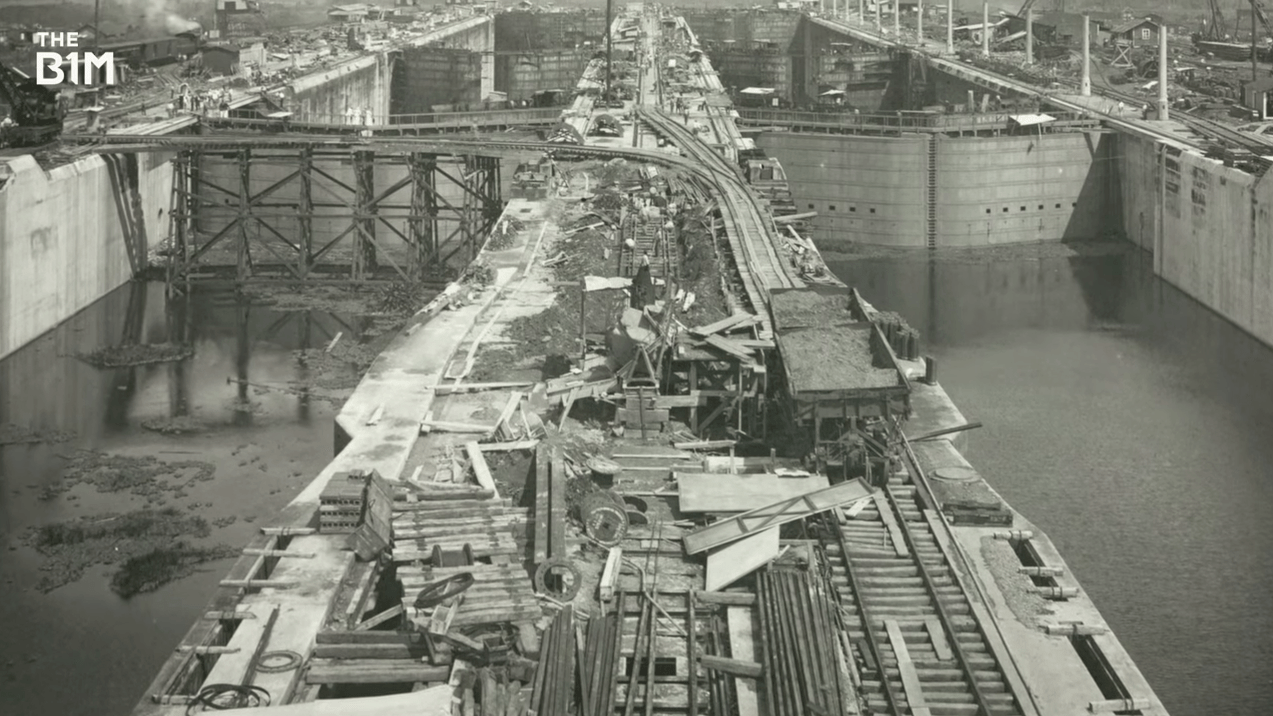 Above: The Panama Canal would go on to become one of the world's most important waterways.

After inheriting the incomplete French assets, the US set about altering the design of the project from a sea-level canal, like that at Suez, to a series of locks which would raise ships from either side before they traversed the country via a manmade lake.

Since 1914 more than 815,000 ships have passed through the canal making it one of the most important waterways in the world.

The canal was further expanded between 2007 and 2016 to cope with larger ships.

Dividing the population centres of Europe and the Middle East, the Bosporus Strait has long been one of the world’s most important waterways, standing as the dividing line between Europe and Asia for centuries.

Springing up along its shores, Istanbul became one of the largest and most sought-after urban centres in history, with control of the city meaning control over much of the trade between the two continents. 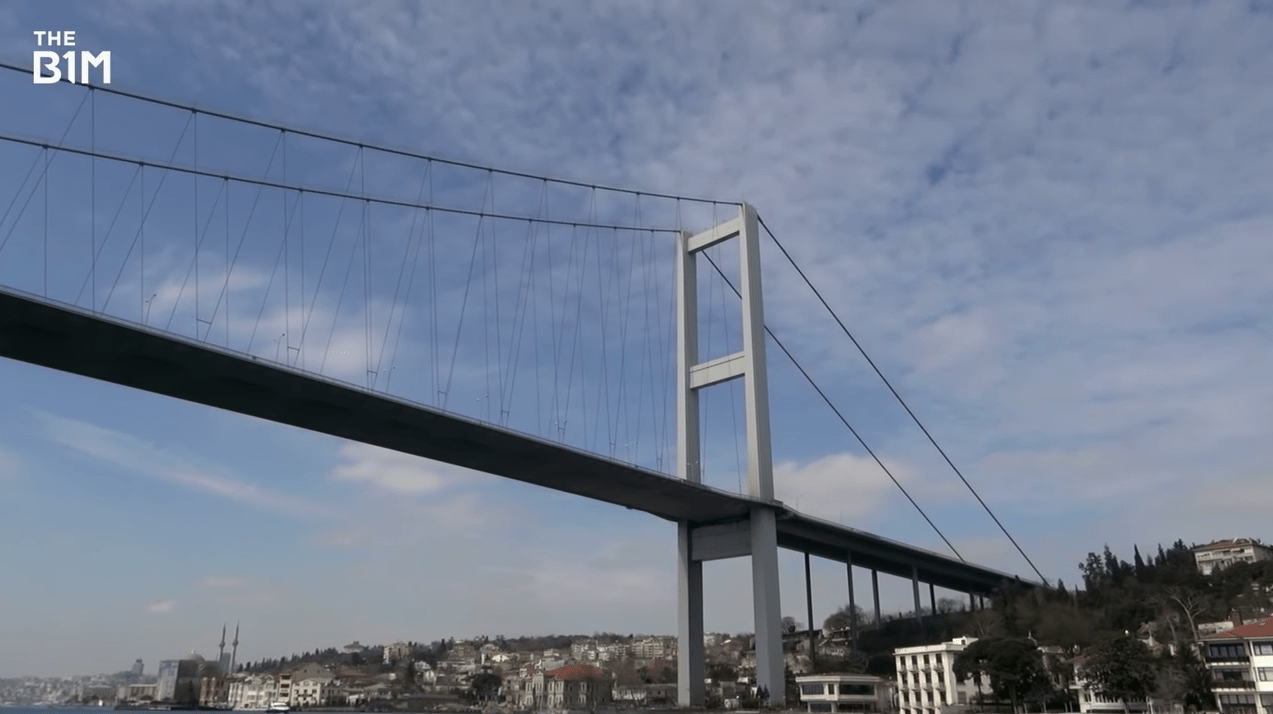 Above: The Bosporus Bridge was the first man-made structure to unite Europe and Asia.

This placed significant demand on the waterway which was becoming crowded with small boats and ferries moving citizens between the European and Asian sides of the city.

To alleviate pressure, a 1,560-metre suspension bridge was proposed to span the strait, connecting Europe and Asia directly.

Construction commenced in 1970 and the bridge was designed with a 63-metre clearance so that the waterway could continue to function.

With Istanbul’s population now surpassing 15 million, demand to cross this geographical barrier has never been higher.

Since its opening in 1973, the Bosporus Bridge has been joined by two additional suspension bridges as well as an underwater tunnel, further adding to the manmade infrastructure that now connects several billion people across Europe and Asia.

With the establishment of the European Economic Area (EEA) in the latter half of the 20th century, the English Channel began to present a more significant barrier to travel and trade than ever before.

To better connect some of Europe’s largest economies, the decision was made to link France and the United Kingdom (UK) beneath them Strait of Dover via a 50-kilometre rail tunnel.

In fact, consisting of two tunnels, as well as a central service tunnel connecting the two, works first began in 1988 with teams tunnelling from both sides of the channel to reduce the overall construction time. 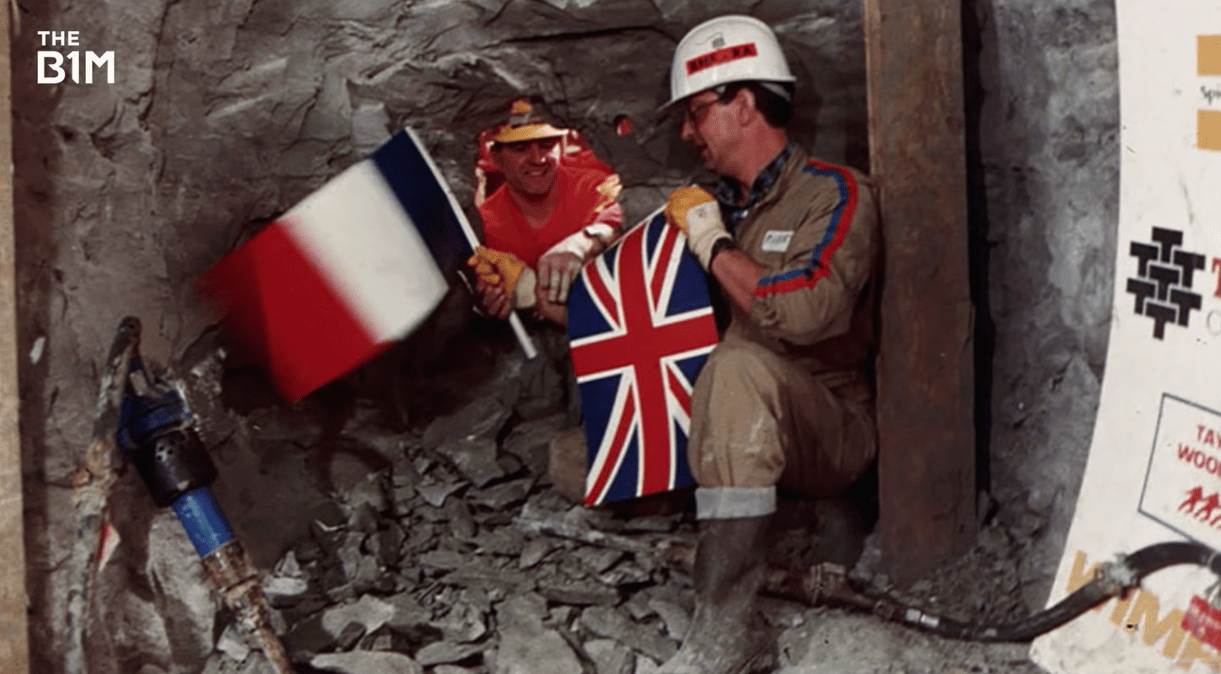 Above: France and the UK were physically united for the first time in millennia when the two tunnels met under the English Channel in 1990 ( image courtesy of Eurotunnel).

Needing to build within a layer of chalk marl for stability, it was imperative that each team remained on course, as even the slightest misdirection could result in the tunnels being misaligned when they met halfway.

Using survey data and lasers to ensure accuracy, the tunnelling teams guided the Tunnel Boring Machines (TBMs) beneath the seafloor making adjustments as they went.

This method of laser guidance proved so accurate that when the tunnels met on 01 December 1990, they were less than two centimetres out.

Opening in 1994, more than 20 million passengers and over 22 million tonnes of freight now pass through the tunnels each year.

As air travel emerged and came of age, the second half of the 20th century saw several regional cities around the world rise to prominence as refuelling stops along major flight routes.

While longer haul flights steadily began to make many of these centres obsolete, authorities in Dubai saw the city’s geographic positioning at the centre of Africa, Europe and Asia - just eight hours flight from more than two-thirds of our planet’s population - as a clear opportunity. 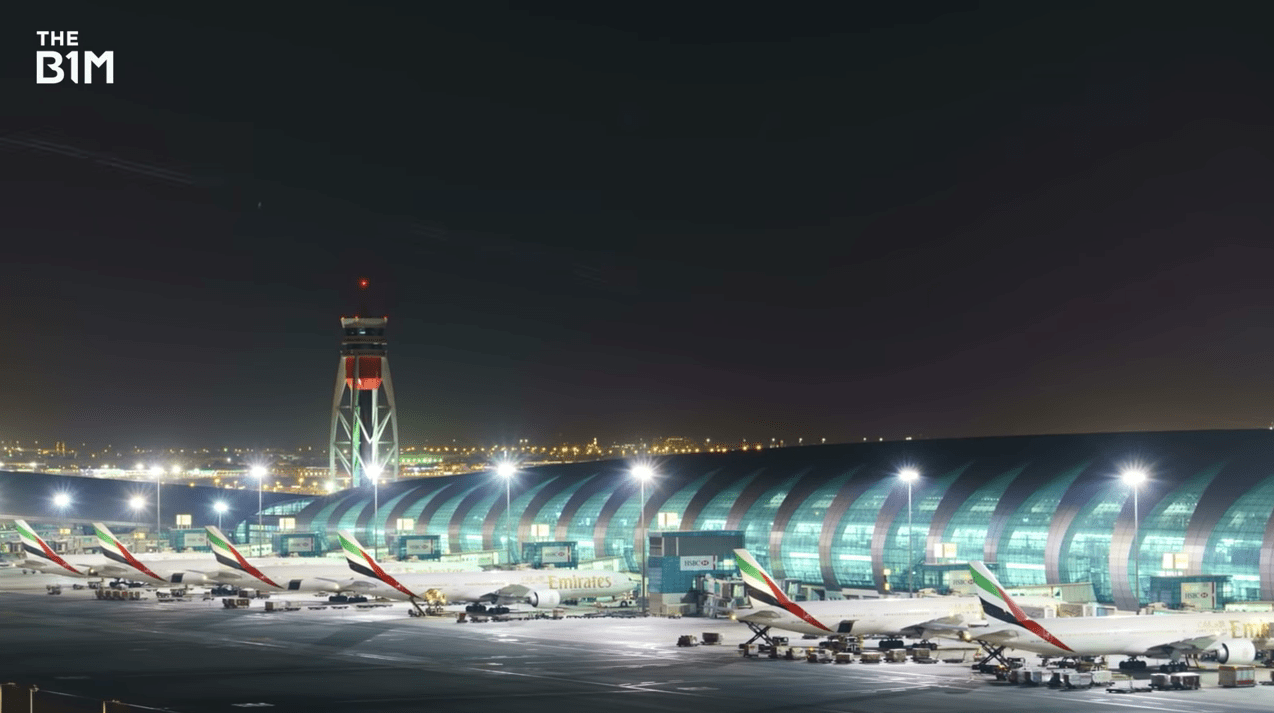 The late-1990s saw them embark on a multi-billion US dollar investment plan that would see the city’s international airport grow from a regional refuelling base into the busiest international aviation hub in the world.

With Dubai experiencing a surge in tourism throughout the 2000s, the airport continued to expand, adding more than 140 airlines to its roster.

With advances in aviation now extending the distances that aircraft can fly, Dubai International - and other hubs like it, have placed almost the entire world within reach with just a single stopover.

While not consisting of any one single project, the extensive amount of infrastructure that has enabled the world to be connected instantaneously via the internet cannot be overlooked.

Since its widespread adoption in the late-1990s, the internet has grown to become the world’s dominant source of information, entertainment and communication. 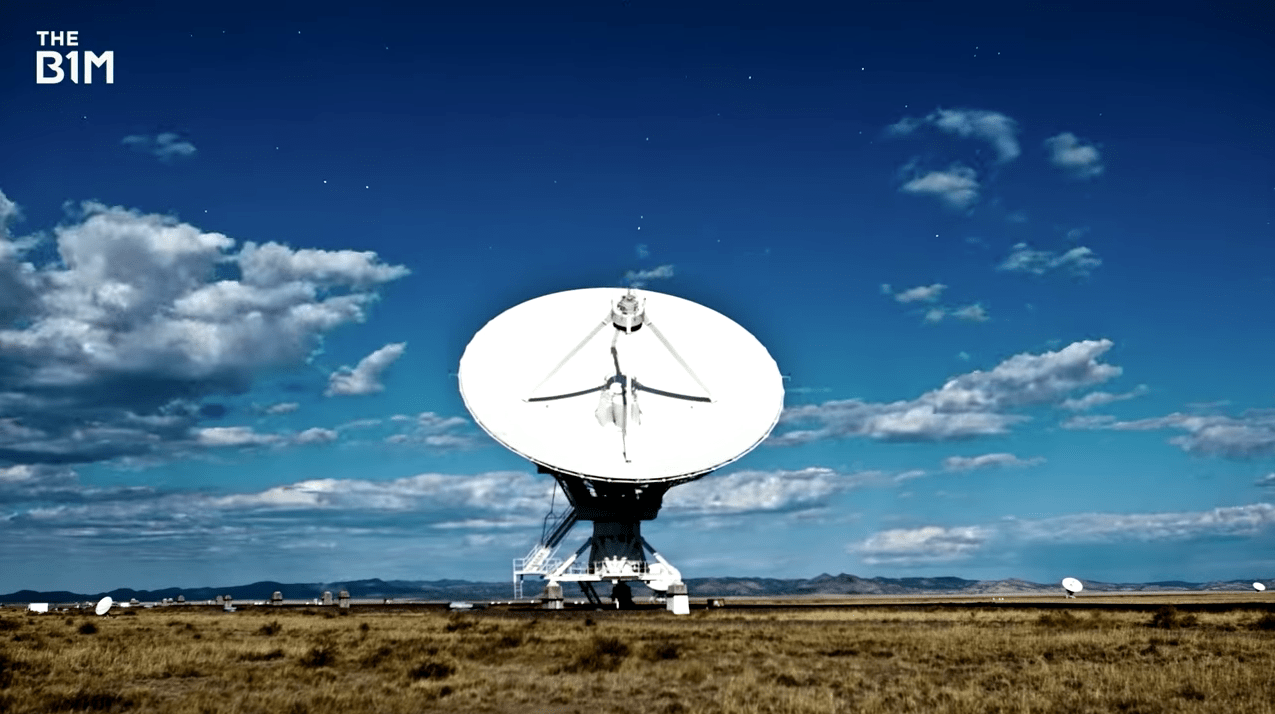 Above: Communication infrastructure has enabled the world to connect instantly, forever changing how we view the world.

From the wires and undersea cables that connect continents, to the vast data centres and satellite technology that link the most remote areas of our planet, today’s global internet system has shrunk the world unlike any other project in human history.