IN 2017 a Russian oil tanker travelled across the Arctic without needing an icebreaker. That’s a huge deal.

The journey connected Asia to Europe in just 19 days — far shorter than the 48 days it normally takes ships to go from China to Europe’s largest port in Rotterdam.

That’s right - our warming climate is melting the ice caps and has made this patch of ocean available for the first time in human history … making it easier for us to transport the fossil fuels that caused the ice to melt in the first place.

It’s an irony-heavy ocean trade route that we’ve never had before — and right now, Russia is in the middle of a massive construction drive to lay claim. 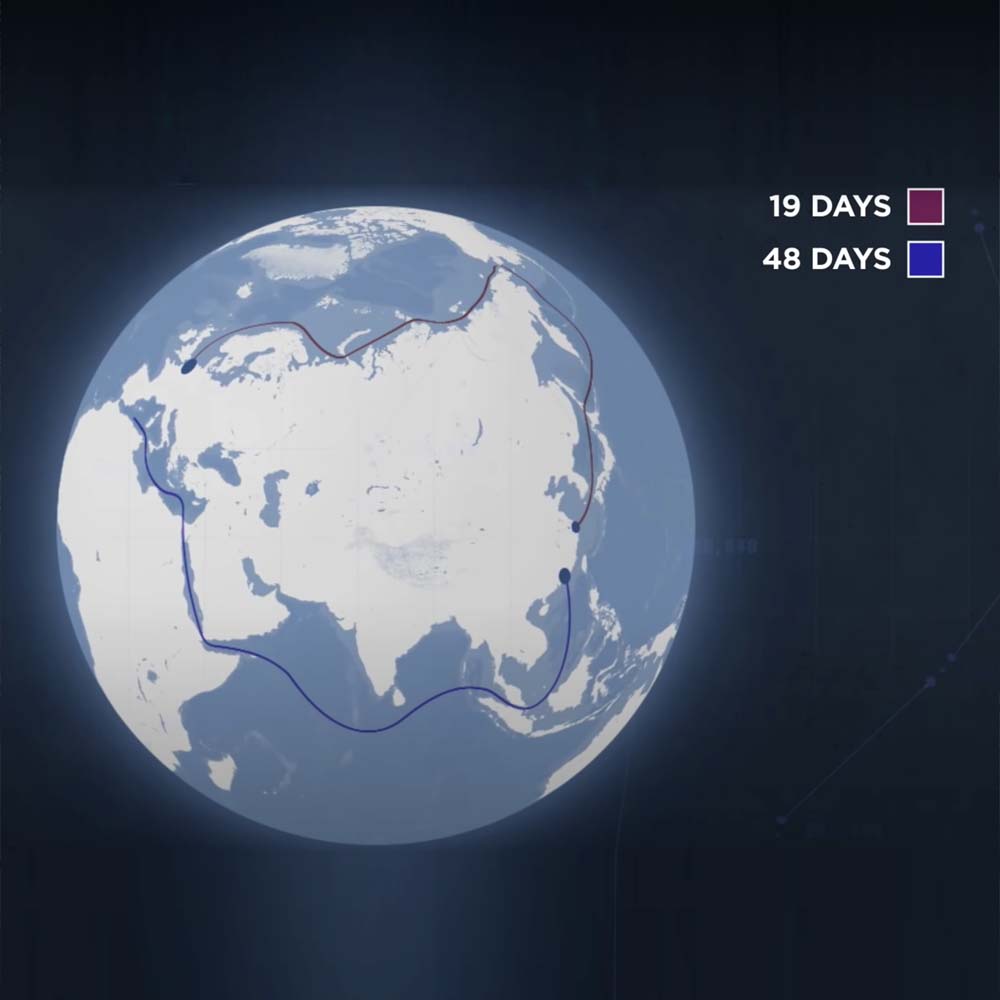 Above: The new Arctic route will dramatically cut down shipping time.

The USD $110BN megaport on the Taymyr peninsula is quite possibly the most impressive thing that Russia is building right now.

Dubbed the biggest project in the modern-day global oil industry, it’ll house the country’s largest Arctic oil terminal and is so huge and so remote that state-owned oil company Rosneft will first have to build the infrastructure needed just to get to the site.

New highways, two airports, 15 villages, and several electricity plants will be developed around the area to get construction off the ground and house the 400,000 workers that are needed to make it all happen.

So far more than 18,000 tonnes of heavy machinery, living quarters, and communications equipment has been shipped to the site.

The country is also building a 770-kilometre pipeline to transport oil to the port where 10 new ice-class tankers will take it the rest of the way to Europe and Asia.

It’s worth pointing out that while the costs of this undertaking seem enormous, they pale in comparison to the profits that are set to be generated. And this megaport is only one part of a larger development scheme in the region. 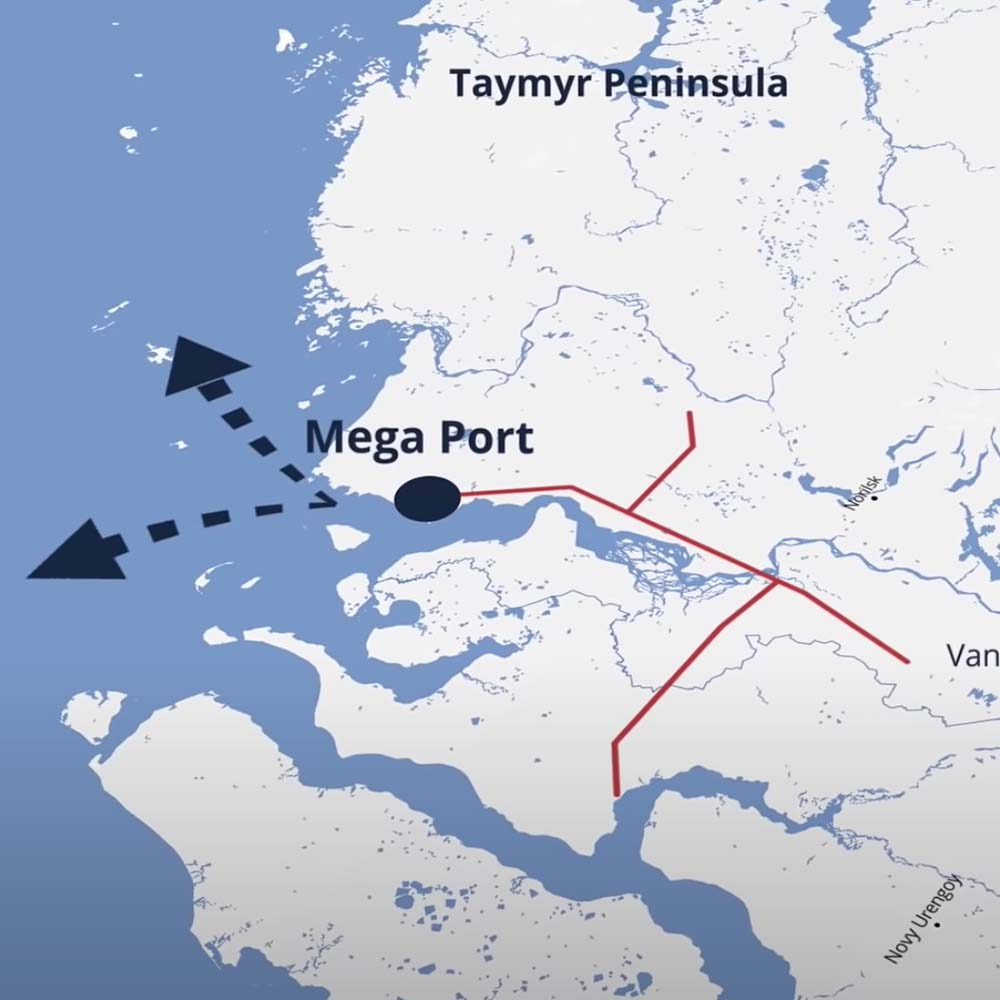 Above: A new 770-kilometre pipeline will transport the oil to the port. Image courtesy of OpenStreetMap Contributors .

The Russians have long-seen the potential of the Arctic. In 2007 they sent a very cold diver down to the bottom of the Arctic Sea to plant a flag at the North Pole.

Then in 2018 the country announced its Northern Sea Route Development Plan. The idea is to significantly increase Russian economic development along the Northern Sea Route over the next 15 years, essentially opening the area up as an alternative to the Suez Canal for shipping cargo between Europe and Asia — especially during the summer months when the ice covering the sea could eventually disappear altogether.

By 2035 Russia aims to increase cargo flow through the area by at least 72M tonnes, and it’s already on track to hit this.

Russian Arctic infrastructure is being brought in from the cold and getting some serious cash splashed on it. Ports are being modernised, ice-class container ships are being constructed, and railways are being expanded. And it goes beyond oil. 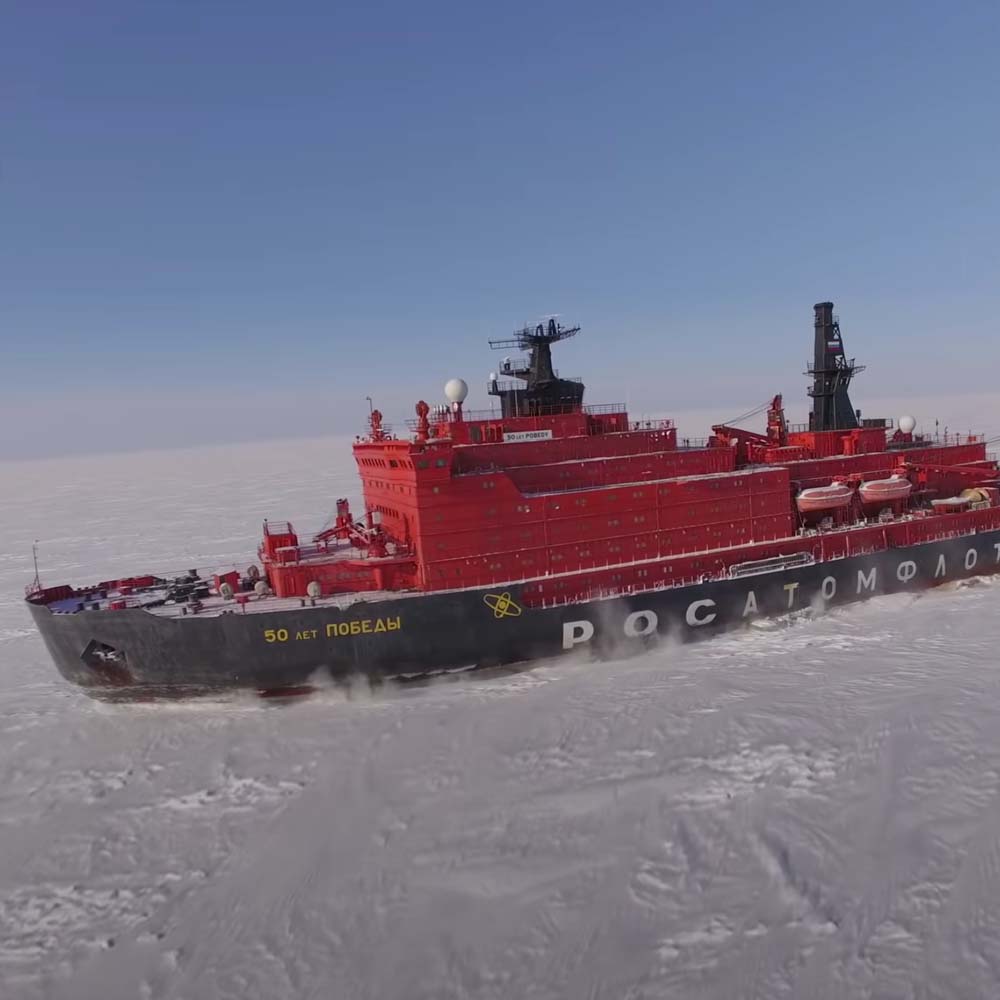 Above: Russia aims to increase cargo in the Arctic by 72M tonnes.

Russian state-owned energy company Rosatom along with UAE-based DP World are co-developing new ports at Murmansk and Vladivostok on either end of the route. They’re being specially designed to transfer cargo off ice-class ships and onto ordinary vessels.

The UAE isn’t the only country to see the opportunity of investing in Russia’s infrastructure. South Korea and China are both eager for new ports and trade routes too.

In 2018 China declared it would cooperate with Russia on an “Arctic Silk Road”, signing 20 bilateral cooperative documents and agreeing to invest in the region.

As part of this, Beijing will build several Chinese docks across Russia’s north in ports that are currently underdeveloped and unable to handle massive volumes of shipping.

A number of new railways are also being built to service these ports. Construction is underway on a 500-kilometre line to link Perm in the Ural Mountains with several northern port cities.

The 12,600-kilometre long cable stretches from the rural village of Teriberka to Vladivostok, improving internet and phone connections for the 2.5M people who live in Russia’s far north — roughly half the population of the entire Arctic.

Several civilian airports are also getting a birthday, Amderma in the west and Pevek, Chersky, and Keperveyem in the east 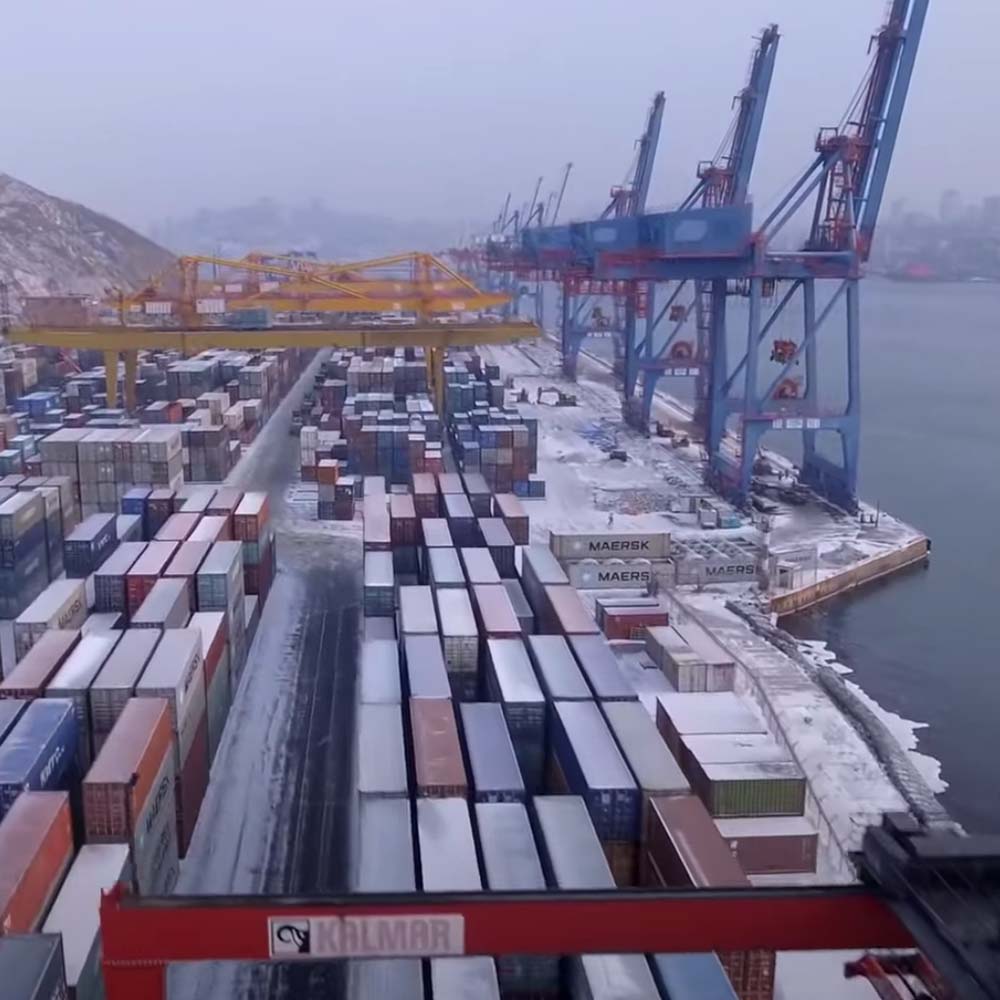 Above: China is building several of Russia's new ports.

The dredging of the Gulf of Ob will be completed in 2022, allowing larger ships to pass through this strategic location: ships that Russia’s building in spades.

A fleet of at least 40 new Arctic vessels will be constructed including eight nuclear-powered icebreakers and 16 rescue and support ships.

Some of these will be Lider-class icebreakers - which basically means they can break through extremely thick Arctic ice and create a path for commercial ships to then follow.

Now as you might expect all this construction has made several countries nervous.

The United States has reminded Russia that the Northern Sea Route and the Northwest Passage are used as straits for international navigation and are not exclusively under their control. Although a lot of the route does fall into the country’s exclusive economic zone.

Russia is also dependent on foreign investment to fund much of this new infrastructure, relying on other countries who would greatly benefit from an alternative to the Suez Canal.

Now, the country has always maintained that its new oil megaports will be environmentally friendly and that they will have a very small hydrocarbon footprint. The oil installations will reportedly be powered by wind turbines. 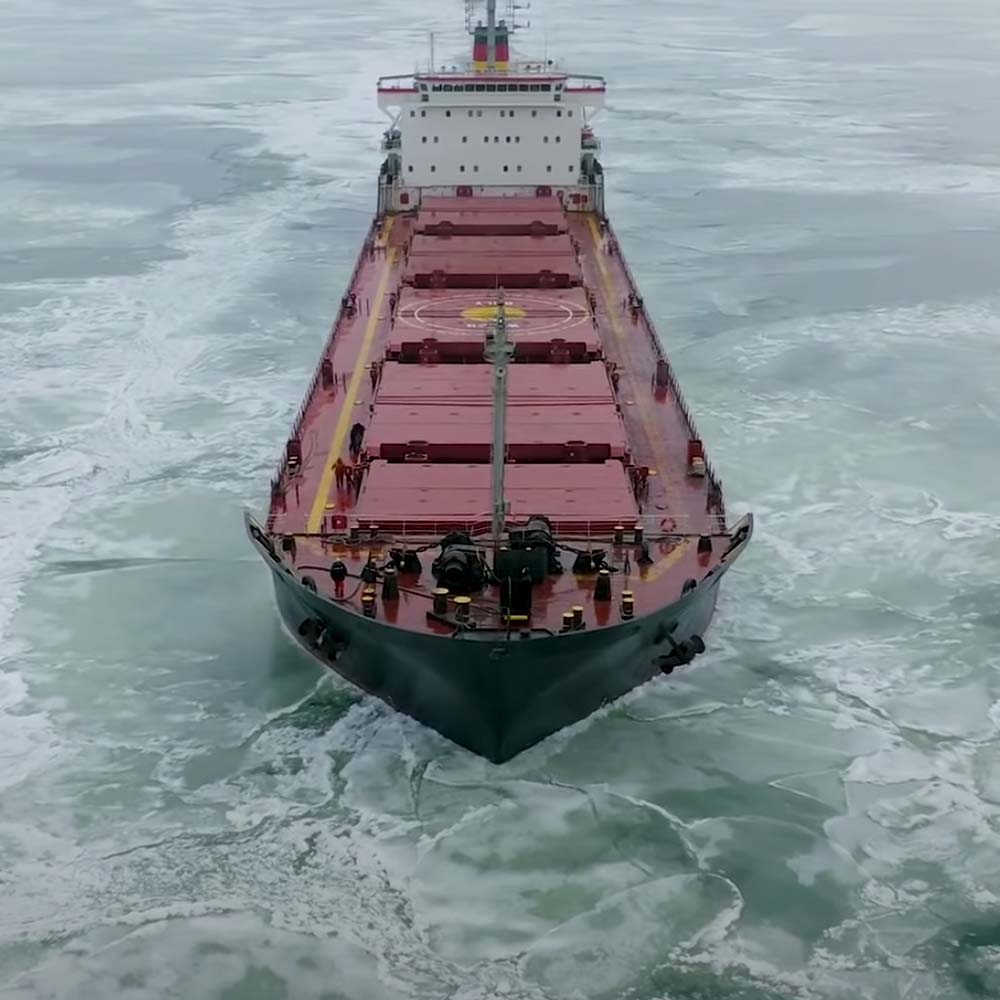 Above: The United States has reminded Russia that the Northern Sea Route is used for international navigation.

But building new oil infrastructure is not really what the world needs right now and several environmental groups have campaigned against these projects.

Parts of the oil fields are located within a protected nature reserve and construction could damage the Arctic wildlife there.

Russia has always been slow in regards to climate change. The Kremlin tends to downplay its seriousness while it has been a major domestic issue politically.

Russia is the world’s fourth largest emitter of greenhouse gases and ratified the Paris agreement in 2019. Now it’s committed to reaching net-zero carbon emissions by 2060, although it has yet to agree to phasing out coal and methane emissions over the next decade.

One thing is clear, as we progress further into the 21st century and sadly see less and less ice in the Arctic the world is going to change in more ways than we expect.