Neuschwanstein: The Reality of Building Fantasy

NEUSCHWANSTEIN CASTLE was built to inspire fantasy. But to construct this impressive building, high above Bavaria in southern Germany, the team faced harsh realities. In this short documentary, we explore the incredible story behind one of the world’s most famous castles.

Ludwig II was King of Bavaria for 22 years between 1864 and 1886, ascending to the throne when he was just 18 years old. In 1866 Bavaria, allied with Austria, lost a war with Prussia and Ludwig lost his status as a sovereign ruler. A year later, he began planning the construction of a kingdom where he could feel like a “real King”.

Ludwig II’s father – Maximilian II – owned Hohenschwangau Castle on a hilltop in Bavaria, close to what is now the Neuschwanstein site. Ludwig spent much of his early life growing up at Hohenschwangau, exploring the surrounding trails and lookout points. 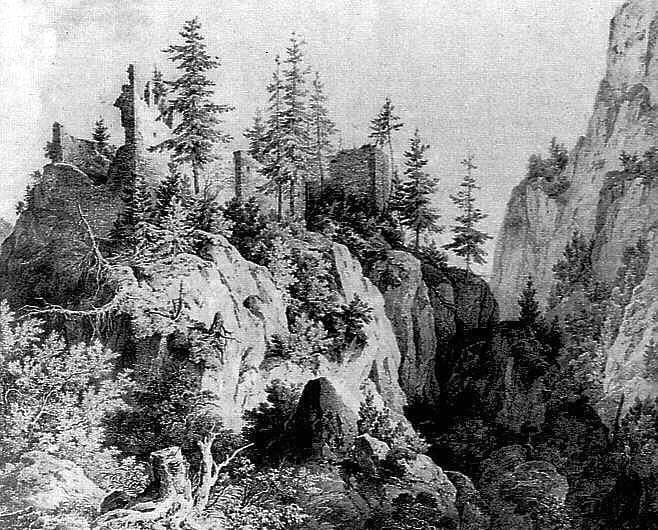 Above: The mountain ridge that Ludwig choose for his castle (image courtesy of Joseph Albert).

One of those features was “Jugend” a narrow mountain ridge that the ruins of two small castles sat on. It was here that Ludwig planned Neuschwanstein; his grand home.

Preparation works for the new castle began in 1868 with demolition and clearance of the existing ruins and an eight metre excavation into the stone outcrop, creating space for foundations.

A critical new access road up the mountain was completed in June 1869 and the castle’s foundation stone – complete with building plans, portraits of Ludwig and coins from his reign – was laid on 05 September. 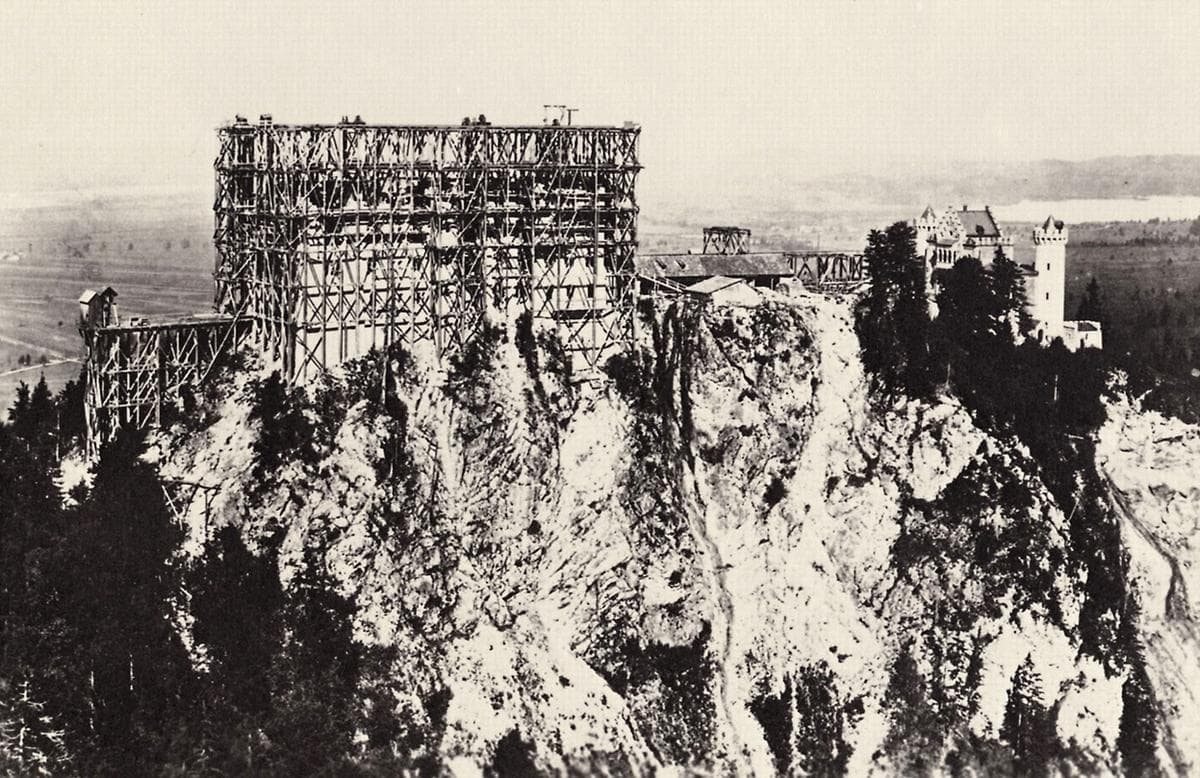 Building such an ornate structure, perched along the sheer cliffs of the outcrop was extremely difficult. At the time, the construction team were making use of the latest building techniques, including cement for the foundations. The walls were formed with brick, clad with light-coloured limestone. Steam engines drove cranes, powering the stone and masonry materials up the mountainside to the construction site.

The gateway building was the first section to be completed, topping out in June 1872. A few months later, Ludwig began living in this part of the castle, overseeing the works. Construction of the main palace started that September.

Despite employing what were then-advanced techniques, the works progressed slower than anticipated. The challenging site was compounded with ever more extravagant, changing designs from the King, coupled with impossible deadlines that often forced his architects and engineers to work round the clock. 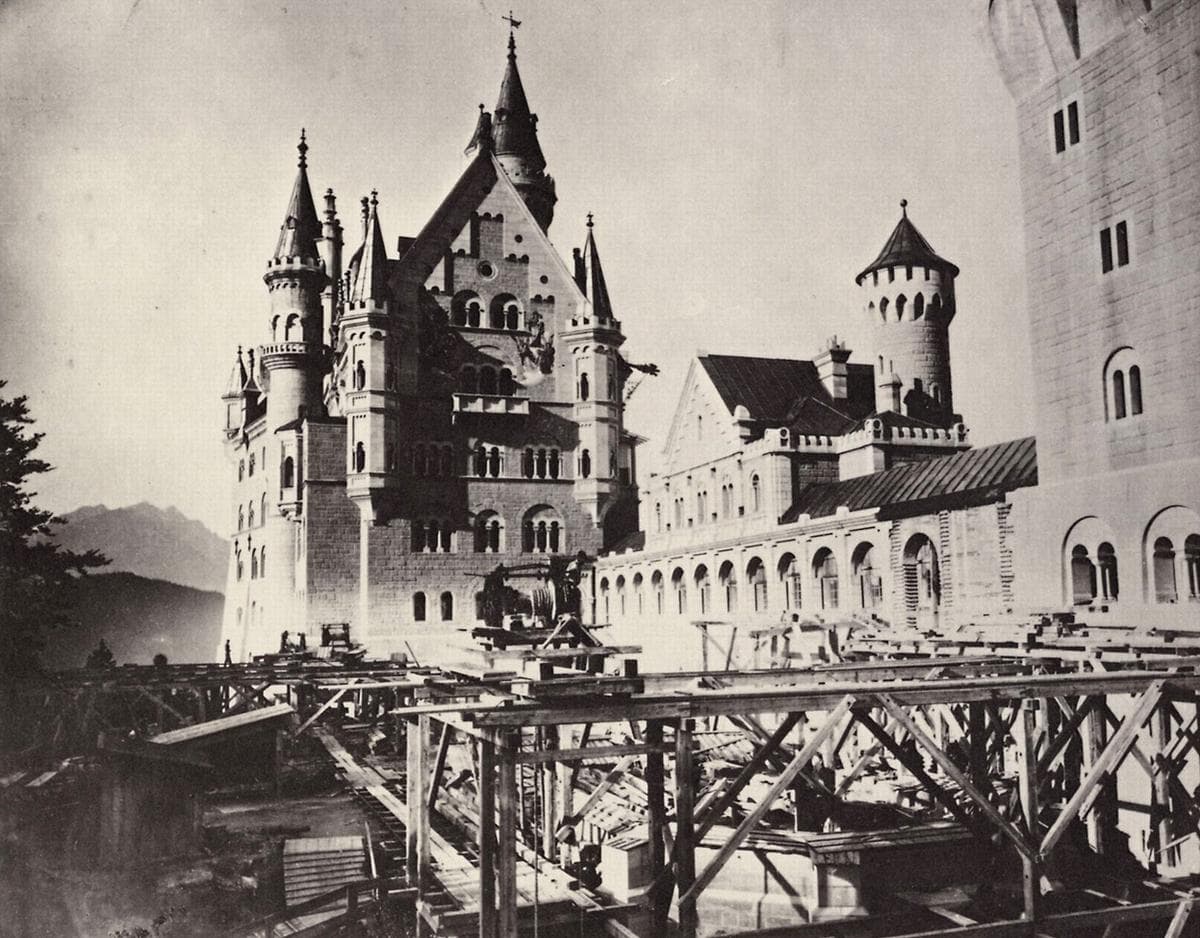 Above: Construction progress as seen from within the main courtyard, and Below: From Marienbrücke (images courtesy of Joseph Albert). 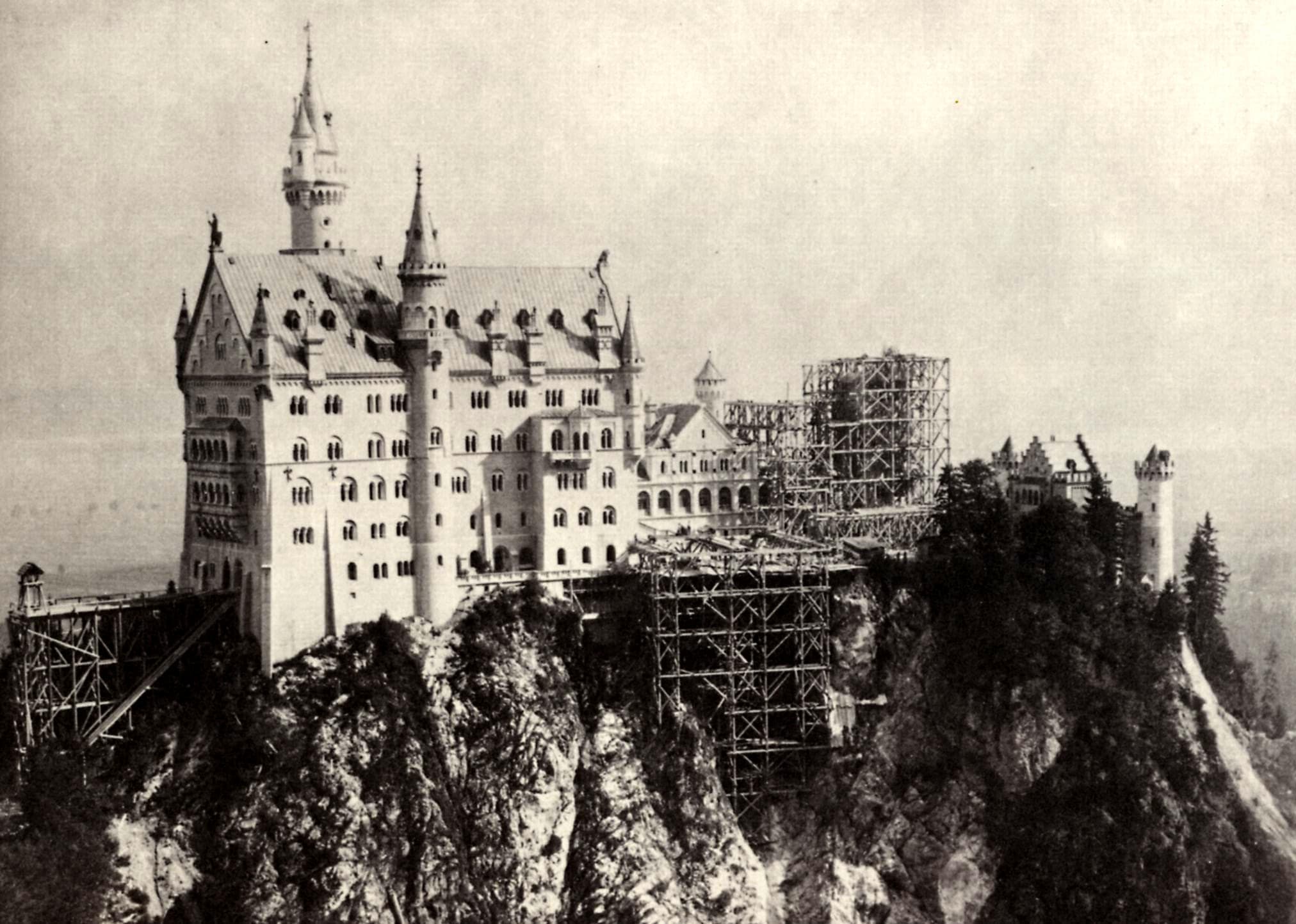 As the years went by, Ludwig increasingly withdrew from human contact and the realities of constitutional monarchy. He created a detached fantasy world around himself and was reported to have become practically nocturnal.

His behaviour impacted on the engineering plans for his new home, even driving the use of a steel frame to make an elaborate new throne room possible. His passion for Richard Wagner inspired and led much of his architectural vision.

"The challenging site was compounded with ever more extravagant, changing designs from the King"

Behind the ornate interior, the castle was fitted out with telephones, hot air central heating and running water; considerably modern touches at the time.

The structure was topped out in January 1880 and Ludwig began living in the main palace from 1884 whilst the fit-out works continued. 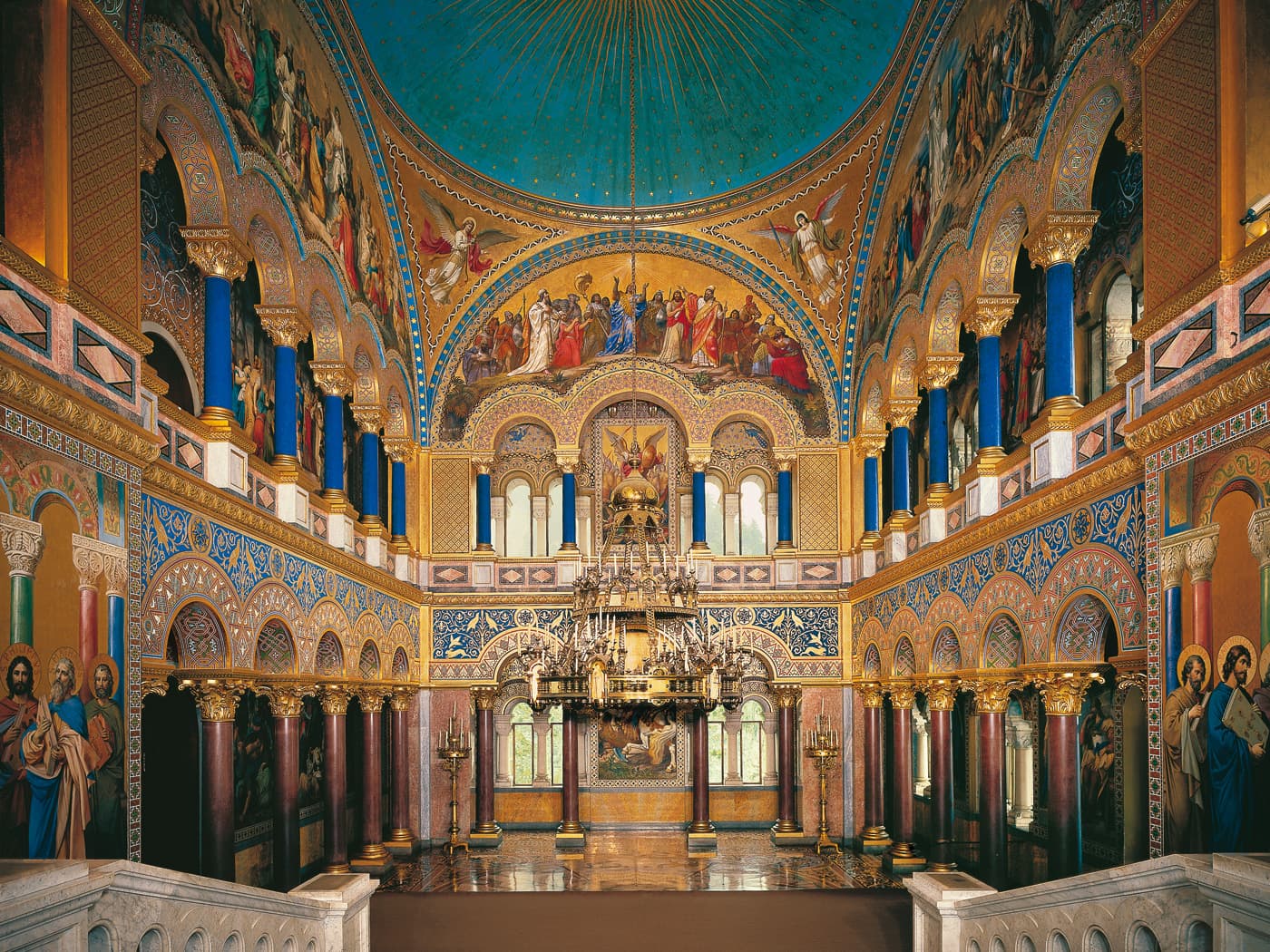 Above: The castle's elaborate throne room, and Below: Plans for the first, fourth and fifth floors (images courtesy of the Bavarian Palace Department [above] and Kienberged GmbH [below]). 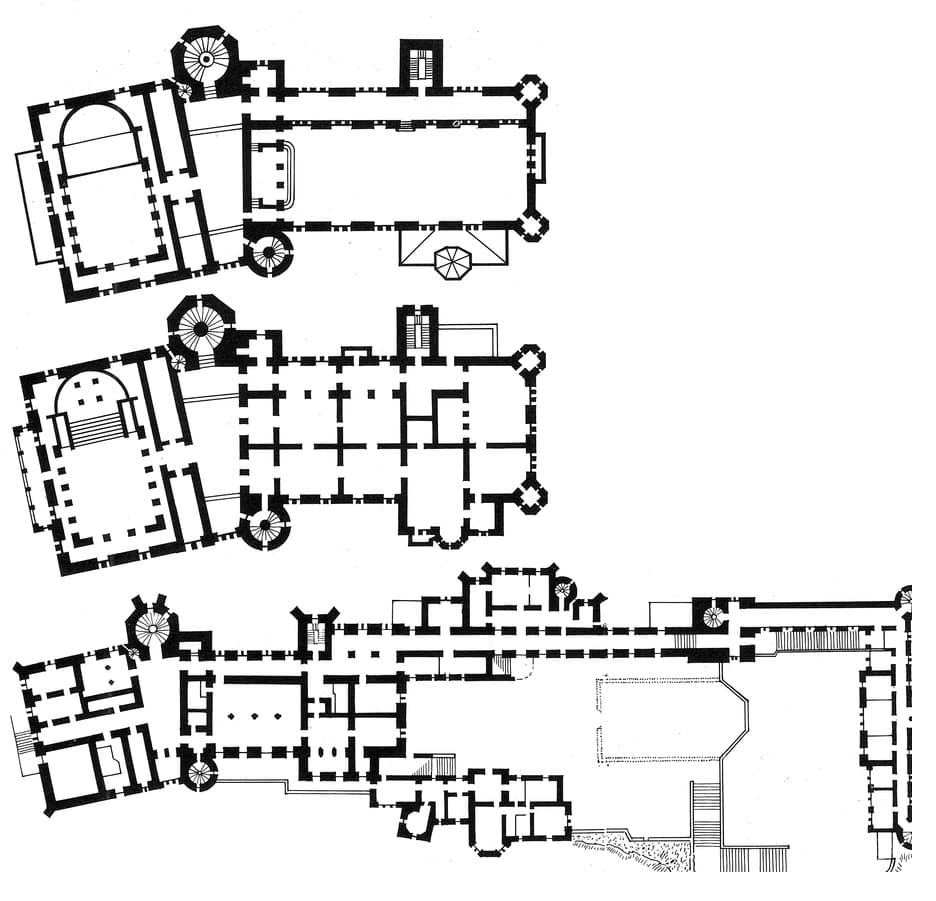 The King’s increasingly peculiar behaviour led his government to plot a coup against him, assembling psychiatrists that had never met him to sign a report declaring him insane. Against Ludwig’s will, he was taken from Neuschwanstein in June 1886 and held at Berg Castle near Munich. He was found dead in Lake Starnberg alongside one of the psychiatrists the next day, never seeing his castle completed.

Shortly after the King’s death, the palace was opened to the public. The fantasy-inspired creation in such a breath-taking setting, quickly became popular.

Neuschwanstein was finally completed in 1892 and has gone on to become one of the most visited and photographed castles in the world. Its presence is notable throughout popular culture, appearing in numerous paintings and in films such as Chitty Chitty Bang Bang and Monuments Men. Today, the structure draws crowds of up to 6,000 people a day in summer months; particularly impressive given its remote location. 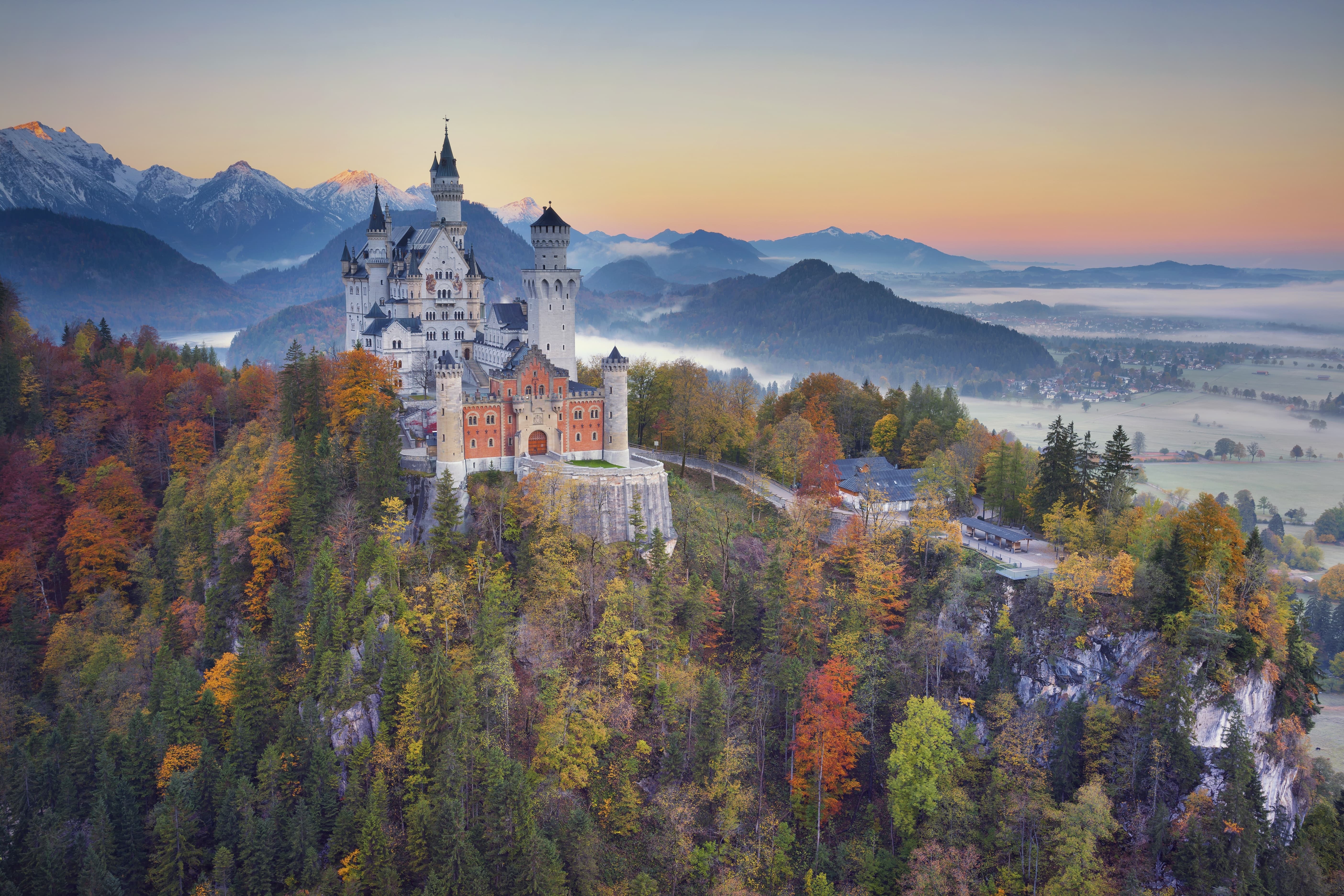 Above: The completed castle in its breath-taking setting, and Below: Some of the on-going maintenance works. 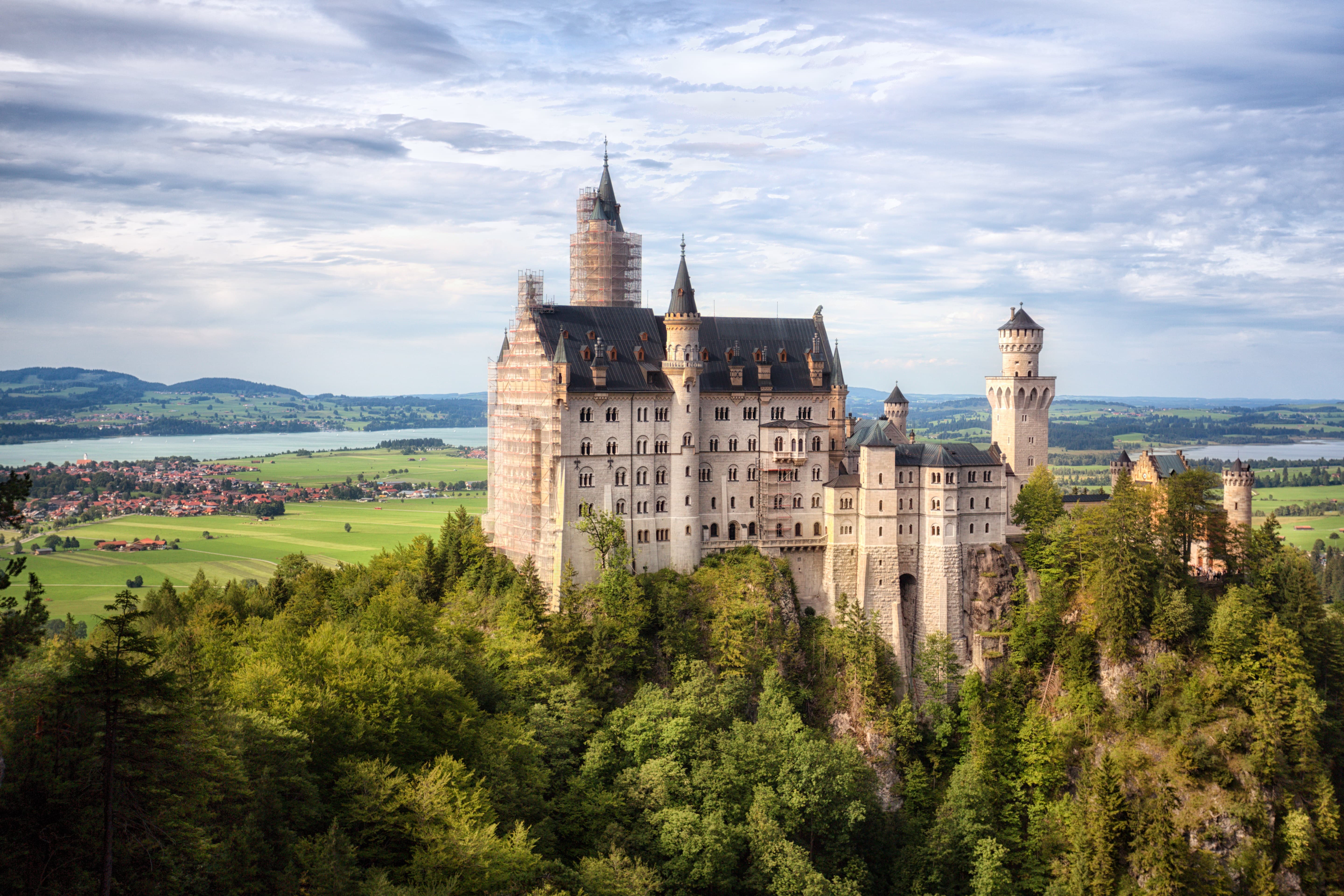 Maintenance is a continuous task. The castle’s highly-exposed setting has weathered the limestone facades, with work ongoing to repair them. The foundations are also carefully monitored and the shear rock walls have to be repeatedly secured.

Despite the tough realities of its construction in Ludwig’s reign and its maintenance today, Neuschwanstein is undoubtedly one of the world’s most impressive and well-known castles; a bridge between our real world and the make-believe that continues to inspire imagination.

Learn more about Neuschwanstein Castle and find out how you can visit here.