NEW YORK CITY'S newest district of skyscrapers is built on a specially designed platform over a live rail yard.

At $25BN, the new neighbourhood is the largest and most expensive private real estate development in US history. It’s transformed Manhattan’s iconic skyline and pushed the bounds of engineering, generating tens of thousands of new construction jobs.

But Hudson Yards has also garnered a reputation as an elite district in a city already marked by stark economic inequalities. And it’s only half-complete.

There are big plans for expansion. But the lifeblood of Hudson Yards – luxury real estate, shopping and dining – has been ravaged by the pandemic.

As the city tries to recover, the megadevelopment’s future is hanging in the balance. 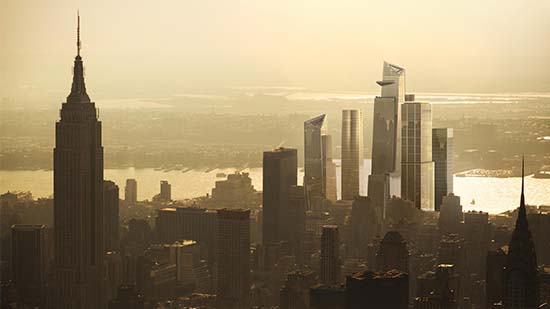 Hudson Yards now dominates western midtown and the cluster of gleaming skyscrapers is among the tallest in the city.

The Eastern Yard, which opened in 2019, spans W 30th to W 34th Street between 10th and 11th Avenue. The Western Yard, the proposed expansion, will extend the megadevelopment further west over the remaining train tracks.

For decades, plans to redevelop the area around the rail yard were devised and dropped. In preparation for New York’s bid to host the 2012 Olympics, the city rezoned the area in hopes of building a new stadium and accompanying buildings. The Olympic bid and stadium plans ultimately fell through, but the vision to build an entirely new neighbourhood remained.

The winning masterplan from Related Companies and Oxford Properties Group painted a picture of a district built around office buildings, upscale shopping, restaurants, parks and the arts. 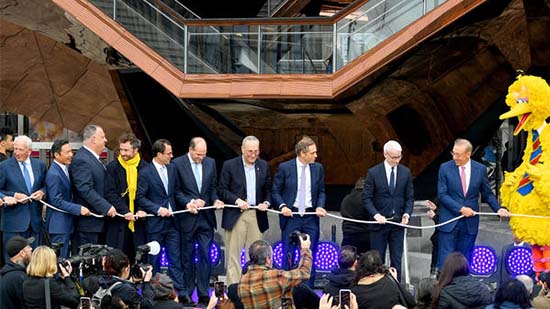 In 2019, Hudson Yards opened itself up to the public with much fanfare. Celebrities, politicians, architects, developers, a choir, dancers and even Big Bird were all there for the grand opening.

But over the last year, the area hasn’t necessarily embodied the grand vision laid out in the masterplan.

The pandemic has seen office life, shopping, dining and live performances all put on hold. And criticism has emerged over how the project used tax breaks and government programs to fund itself.

“The pandemic really dealt a blow to what was already a risky venture,” senior policy analyst at Community Service Society of New York Samuel Stein said.

“They needed the ultra high end real estate market to stay booming. The rentals in Hudson Yards had the highest rent anywhere in New York City. The condos sold [were] competitive with Billionaires Row.” 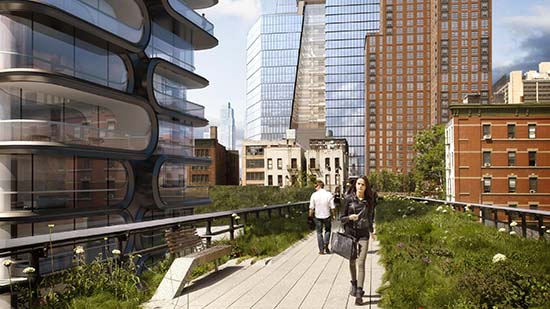 The Eastern Yard is home to 1.8 million square feet of residential space, with apartments in the luxury buildings going for millions of dollars.

Beyond housing, Hudson Yards has also given rise to some new landmarks in the city.

The Edge, a triangular observation deck 100-storeys in the air, is the tallest in the Western Hemisphere. You can do yoga, sip frosé or take a photo laying over the glass floor.

Back on the ground, The Vessel, designed by Heatherwick Studio, has been a controversial, yet undeniably ambitious public installation.

And The Shed is a cultural centre with a retractable outer shell that can double the building’s footprint when pulled out over an adjoining plaza. 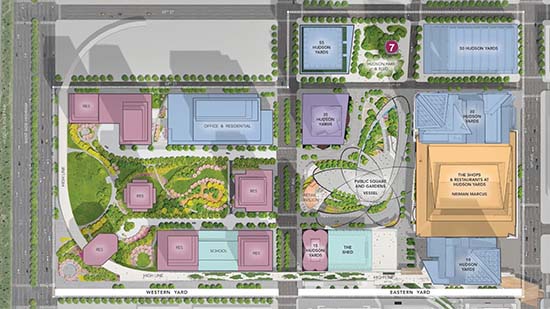 Phase Two calls for 6.2 million square feet of new development, including residential buildings, an office complex and a K-8th grade school. The extended development will then be framed by the High Line, the West Side’s iconic elevated park.

According to the New York Times, Phase Two appears to be on hold, as the developers are seeking $2BN in federal funding to build the 10-acre platform that will serve as the base of the new development.

Related, the property’s developer, has not yet responded to our requests for comment.

“Most of the affordable housing in Hudson Yards was supposed to be built in Phase Two, so that is a rationale for completing the project,” Stein said. “But I think for the city, it's also a lesson to learn that we should never allow the public benefit to come in phase two of a majorly financed public-private development.” 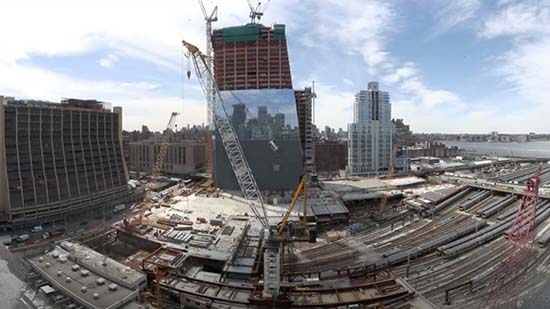 Above: Construction of the Eastern Yard platform. Photo courtesy of Hudson Yards via EarthCam.

Now as you might have guessed, building an entirely new neighbourhood and some skyscrapers above an active rail yard is not easy. You’re not just building a new development on land, you’re also building the land itself.

The Western Yard will be built on a 10-acre platform similar to the one constructed over the Eastern Rail Yard.

Hundreds of pipes will be drilled into the bedrock between the train tracks and then filled with concrete to create the pile foundations. They take the load of everything above and pass it down to the much stronger bedrock beneath the surface soil. Trusses connect sections of the platform where it’s not possible to drill into the ground. 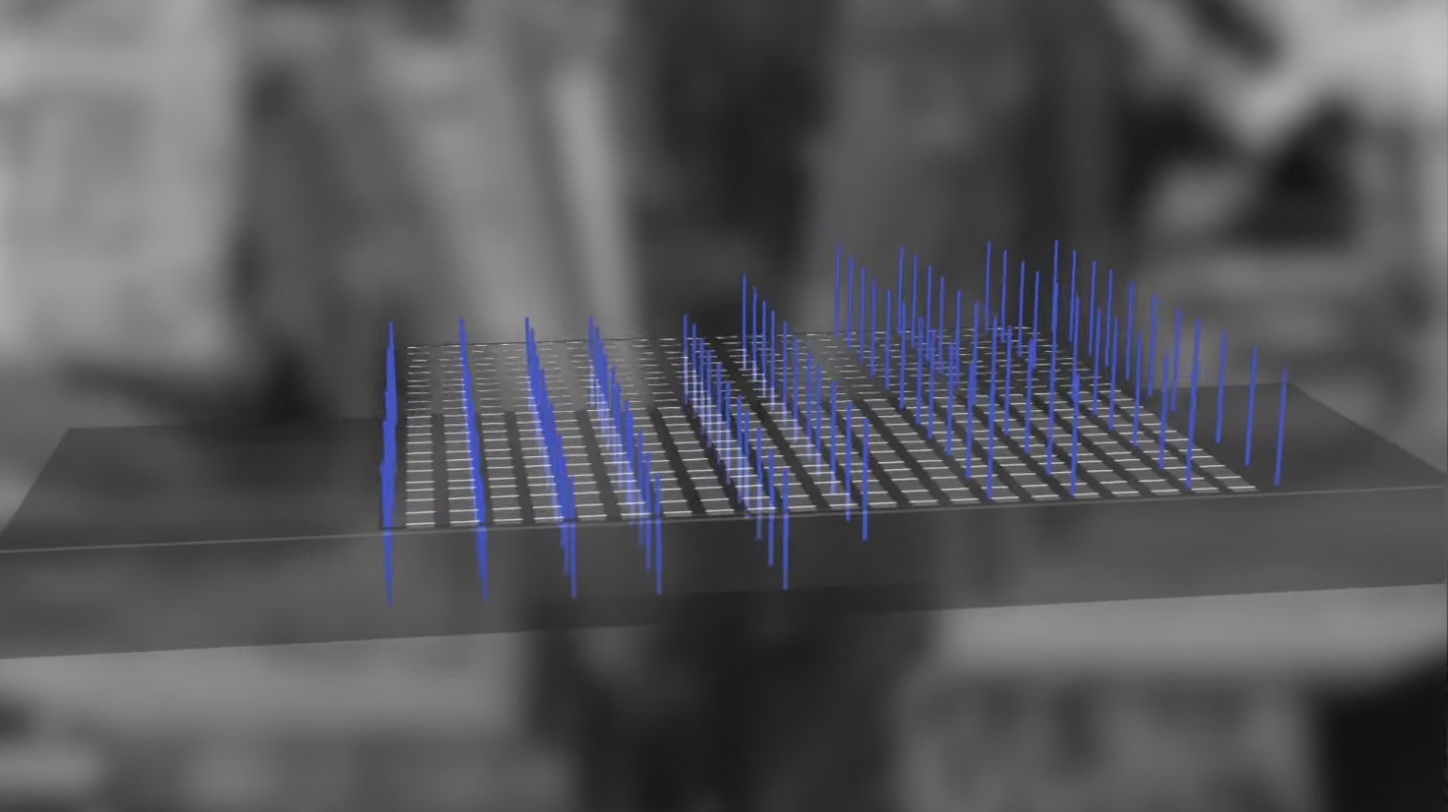 Above: The platform is supported by 300 caissons of varying sizes drilled into the bedrock. Graphic by The B1M.

At some points, the Hudson Yards crew only has an hour or two to bring their rigs on site, drill into the bedrock of the rail yard, and remove the rigs before the trains come through. Accuracy can come down to a fraction of an inch.

Just across Manhattan to the East, parts of Park Avenue were actually built on a similar platform system around Grand Central Terminal.

“To build something like this, they have to basically play a giant game of Tetris where you're establishing the pillars in places that are unused by the train lines below,” Stein said.

Working around an active rail yard is a delicate dance, planning construction around train schedules so they can run without disruption. And all those trains generate a lot of heat.

A ventilation system of massive fans typically found in jet engines are nestled between the platform and the rail yard to help cool the space. To protect the plants above the rail yard, a system of tubing helps circulate cooling liquid below the surface. 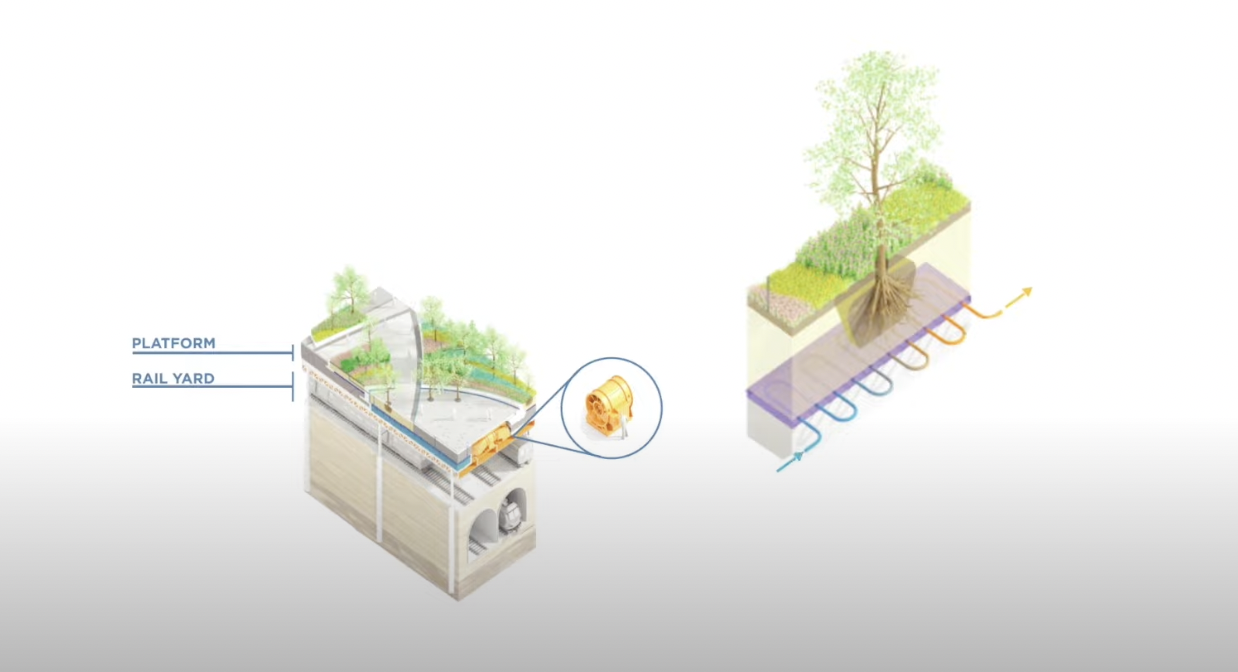 Above: A diagram showing the platform's ventilation and cooling systems. Photo courtesy of Hudson Yards.

When you’re building on tight timeframes over moving trains, there's little room for error - and digital modelling is crucial to making the most of your time on-site.

It’s difficult to put into words the volume of digital information that’s generated when building a project like this. If it were all printed out and stacked-up it would probably be another skyscraper in its own right (and a pretty unsustainable one at that).

From an engineering and architectural perspective Hudson Yards is already a modern-day New York City icon. But the success of new developments is really measured by their impact on the lives of people that live in the area.

“What I would like to see is not a decrease in the ambitiousness of our planning programs, but rather to use that ambition to meet the actual social needs of people here,” Stein said.

“So if we're going to do another project like Hudson Yards, we should be looking at what the needs of people are in terms of housing, in terms of jobs, in terms of open space and all the rest, and not sort of building for the highest end and assuming that it will trickle down.”

With such a huge area of inner-city land available for development, and near endless money at the team’s disposal, Hudson Yards appears to have all the tools it needs to become a vibrant new neighbourhood.

But its lasting success can only be determined by the culture and community that grows there. To be truly embraced as a new New York City neighbourhood, Hudson Yards will need to deliver what the people of Manhattan really need - not just what developers think they want.

Video narrated by Fred Mills. Special thanks to The Dronalist, Adam Parker Goldberg and Samuel Stein. Additional footage and images courtesy of Hudson Yards, and The Edge.