3 Construction Jobs That Don't Exist (Yet)

RAPID advancements in technology are creating new jobs roles that simply wouldn’t have existed 10 years ago - and with such a wide and exciting array of technologies currently entering the construction sector - from AI and robotics to drones, exoskeletons and even 4D printing - we are bound to see new occupations in the industry in the years ahead.

Looking at current trends and the projected growth of certain technologies, we have theorised three construction job roles that could exist by 2028.

Above: With the increase in drone use throughout the industry, a new role that coordinates drone activity may come into existence.

Unmanned aerial vehicles (UAVs) (commonly referred to as drones) are already being used to survey sites, monitor building progress and conduct inspections - and their use in construction is only expected to sky-rocket over the next 10 years.

Above: Co-ordination will become increasingly more important as drones take on ever more complex tasks, like building this rope bridge ( image courtesy of Gramazio Kohler Research and ETH Zurich).

In such an environment it is easy to see the need for some form of centralised human control and supervision arising in the form of a role that we are calling “Drone Wrangler”.

This role would involve planning and scheduling UAV activity, monitoring drones in the field, analysing performance and maintenance and co-ordinating with authorities regarding permits and other forms of regulation.

Beyond the wrangling of drones on specific projects, and with a significant increase in their use across the sector and in other service and goods industries, the opportunity for regional Air Traffic Controllers based in state-of-the-art command centres could also arise.

Closer to the present day, the industry could soon be tasked with building “skyports” - a new form of infrastructure project to specifically facilitate drone activity, such as Uber’s flying taxis.

Above: Robotic presence in construction is growing and with it will come the need for centralised human control.

With an incredible number of prototypes already developed and being tested in live trials, robotics looks certain to be a key growth area in construction technology over the next 10 years.

We’re already seeing the potential of robots to automate dangerous and highly repetitive tasks in a number of areas - from constructing masonry walls and tying rebar, to undertaking site surveys.

There’s even the development of autonomous vehicles and plant which can undertake grading or cut and fill.

These tasks are inherently labour intensive and limit what humans can achieve in a single working day. With potential round the clock automated construction, there is again likely to be the need for human control, coordination of activities and supervision.

Above: We are already beginning to see what robotics can do for the construction industry (image courtesy of Fastbrick Robotics).

To prevent technical glitches derailing unsupervised robots or automated plant, we envision the role of “Robot Commander” to come into existence.

This person would essentially be a manager for a series or group of robots and effectively control a form of “kill switch” that could override them in the case of malfunction or error.

Robotics and automation lead to the broader area of artificial intelligence. This too is already entering the industry in the form of “predictive design” and machine learning.

Perhaps more sinister is the fear shared by some pioneers around the ever increasing strength of AI and its ability to potentially over-power mankind at some point in the future.

In this context, we foresee an “AI Regulator” role - a deeply complex task that requires advanced ethical judgements to be made almost daily. Although this may seem far-fetched, it wouldn’t be a million miles away from some of the emerging regulations around data protection and ethics we see be debated in reference to internet service providers and social media giants today. 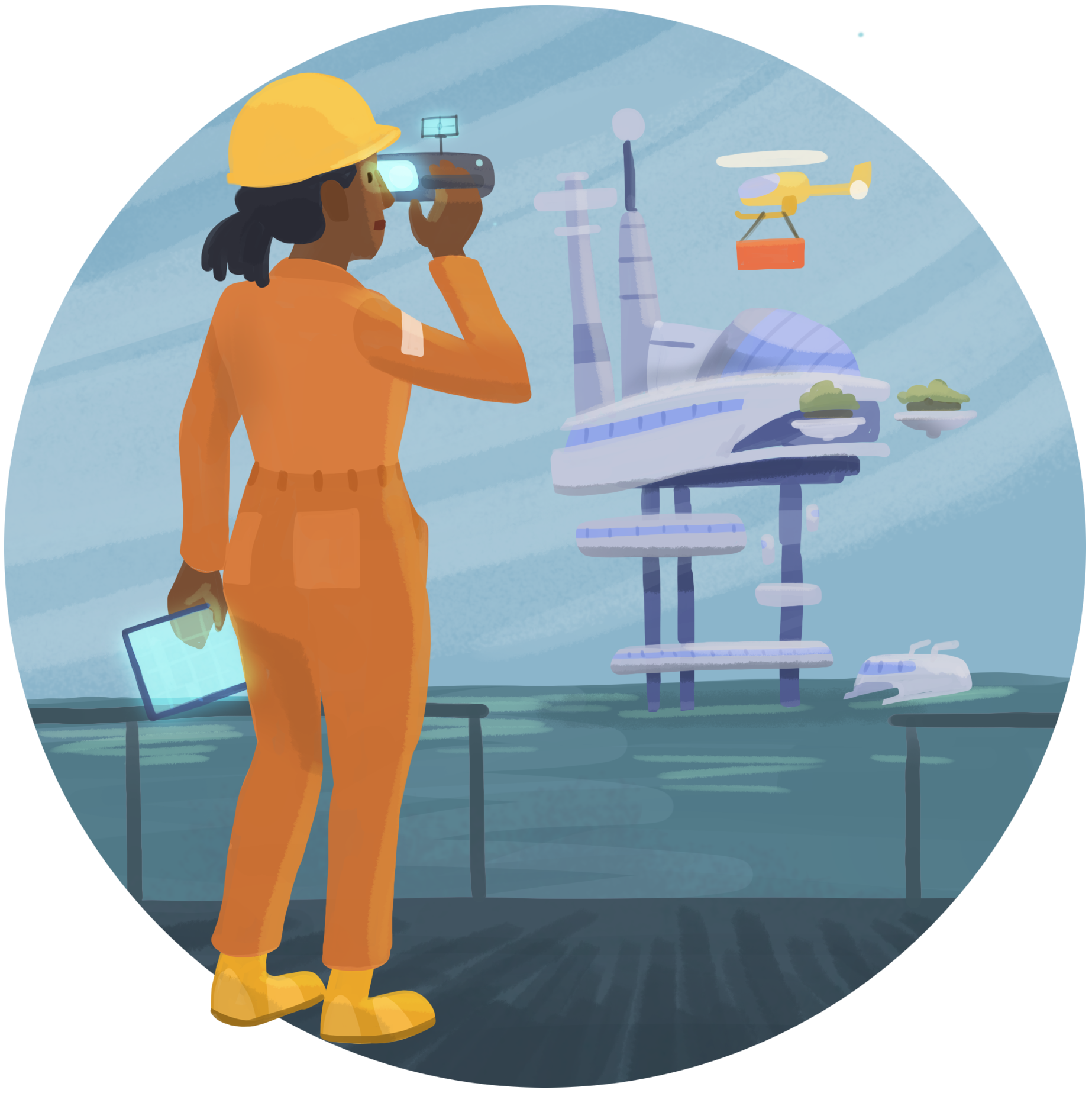 Above: Designing aquatic structures would require an entire new class of architects and engineers.

With a rapidly increasing population applying pressure to urban centres, resources and land availability, humans could begin to colonise the oceans in the coming decades.

With a rapidly increasing population applying pressure to urban centres, resources and land availability, humans could begin to colonise the oceans in the coming decades.

Oceans cover over 70% of our planet, yet we have explored a mere 5% of them. While a number of research facilities, specialist hotels and even a data centre exist under the ocean, the successful colonisation of this space to form habitats for millions of people will take engineering to the next level.

Above: If humanity is to colonise the oceans, a host of issues would need to be addressed, this would lead to new job opportunities opening up in our industry (image courtesy of Andre Surya and Kemal Attaturk).

An entirely new class of architects and design engineers will need to be trained to develop these submerged worlds.

With a host of challenges to overcome including water pressure, water tightness and the inclusion of natural light, what will these new worlds look like?

Will we live on the ocean floor in domes and mine minerals? or will we float along the surface in structures such as there giant “oceanscrapers” that stretch down into the depths?

Whilst each these roles may seem far-fetched, history has shown us that advances in technology almost always lead to new opportunities and job roles that the previous generation never could have imagined. YouTubers are a perfect example.

Special thanks to Luke Newell for his original concept artwork, developed for The B1M.