THE construction of a building is a complex and costly process that requires significant effort and planning from a number of parties.

For this reason, buildings are often refurbished or renovated to extend their life, while unsuitable structures on highly desirable sites are commonly demolished to make way for new developments.

But some buildings fall victim to unique events that lead them to become completely deserted.

Once serving important purposes but now forgotten and standing eerily frozen in time, we have uncovered some of the world’s most intriguing abandoned buildings.

With the opening of the city's first subway line in 1904, New York finally had a rapid transport system to rival those of other world cities, like Paris and London.

The City Hall Subway Station was among the grandest on the entire system with a gracefully curved platform, vaulted arch ceilings, decorative mosaics, intricate skylights and impressive chandeliers. 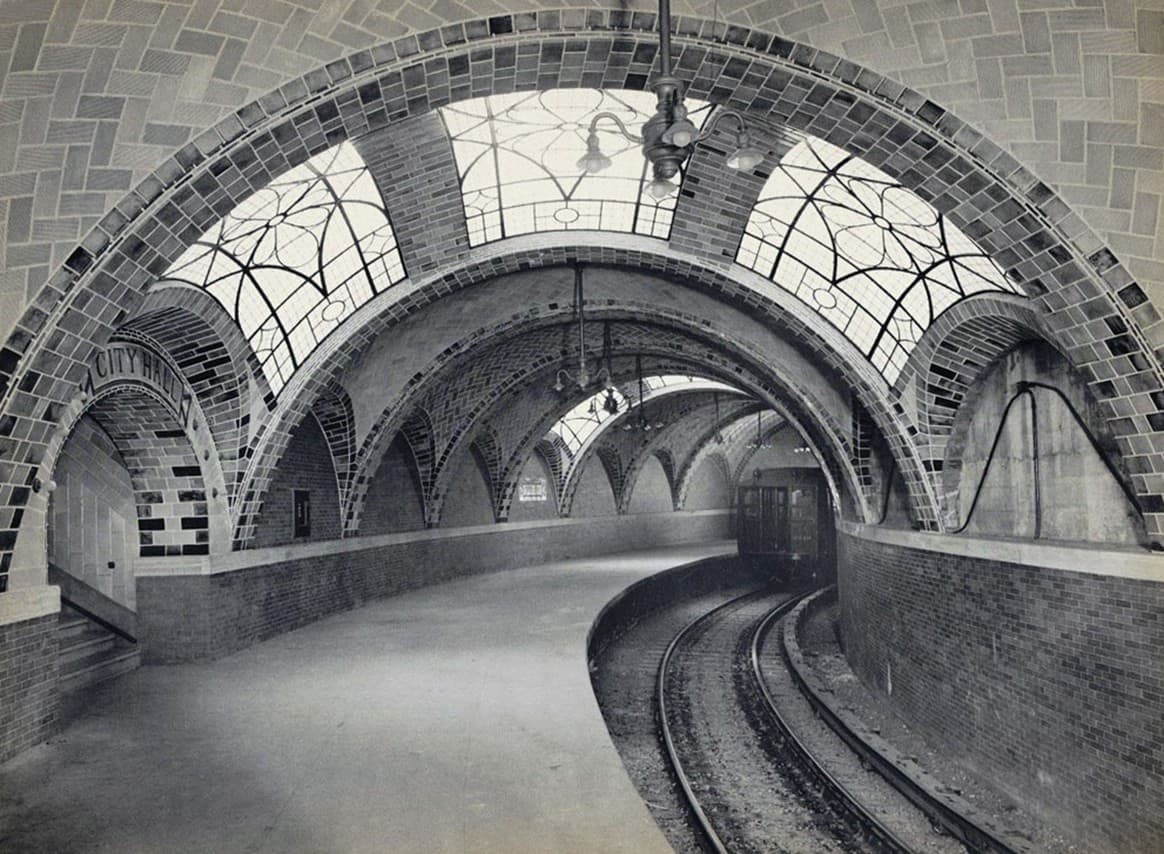 Above: The station was amongst the grandest on the entire New York subway system (i mage courtesy of Frank Pfuhler).

While the grandeur of the underground station was widely admired, commuters quickly realised that the nearby Brooklyn Bridge subway station offered much more convenient transport connections onto Brooklyn and further Downtown, significantly reducing the number of passengers using the station.

Additionally, as the popularity of the subway system grew, so too did the length of train carriages.

These longer carriages were unable to make the journey through the station’s loop as the curved design of the system prevented them from pulling up alongside the platform without creating dangerously large gaps between the train and the platform. 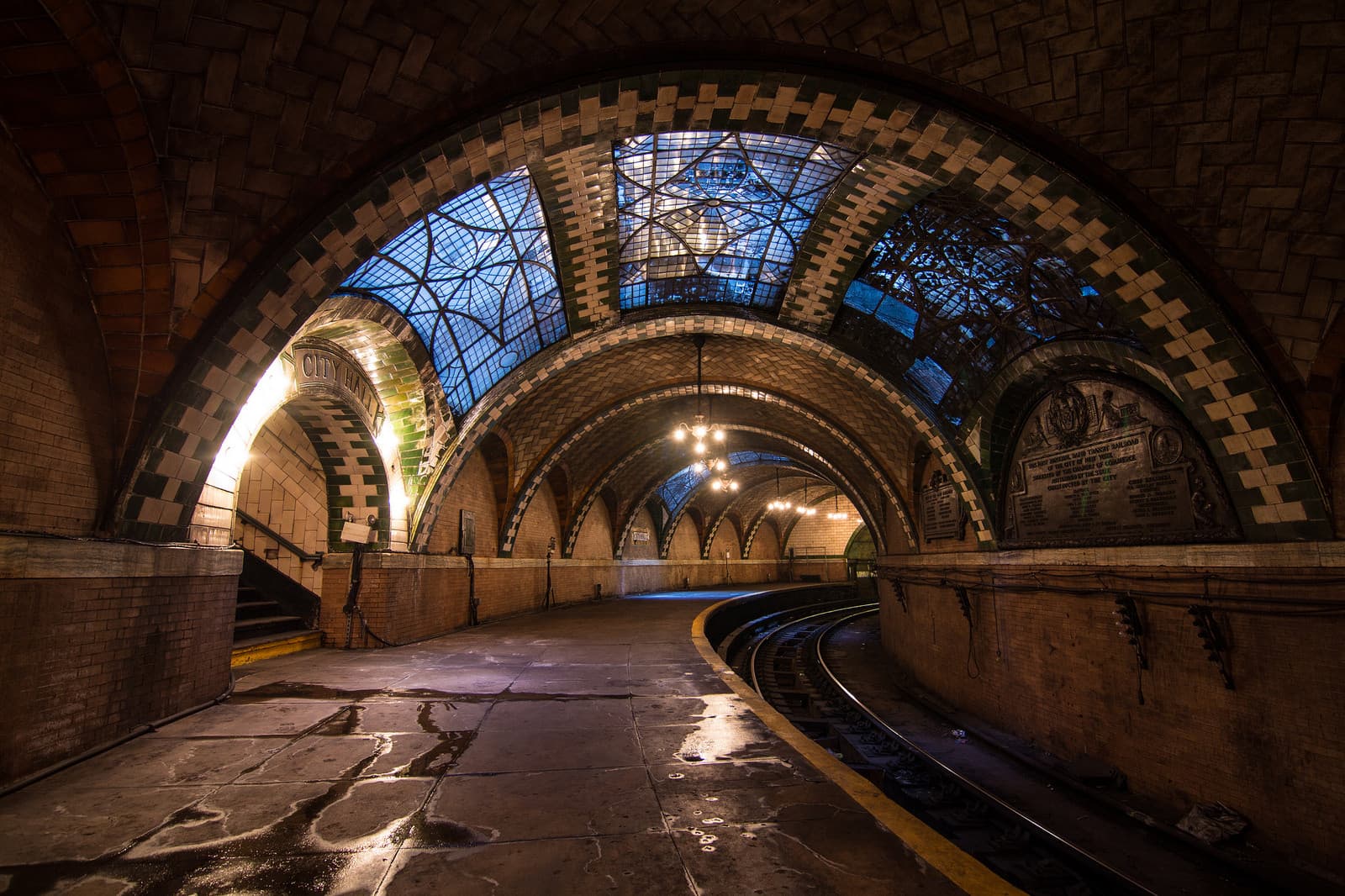 Above: Thought it has not operated as a passenger station for over seven decades, the structure's interior remains relatively intact (image courtesy of John-Paul Palescandolo).

By 1945 the number of passengers using the station was as low as 600 per day and the decision was taken to close it.

While the number 6 train still uses the loop to turn around, the station itself has remained unused for passenger purposes ever since.

However, due to its somewhat protected location underground, this abandoned structure has fared better than some of the others on our list. Shielded from the elements, much of the intricate detailing of the original design survives to the present day.

The New York Transit Museum run a limited number of tours of the site and film production companies occasionally use the platform as an early 1900s set.

From its construction as a strategic Royal Air Force (RAF) base for the British in 1939, Nicosia International served as the main airport for Cyprus.

However, this came to an abrupt end in 1974 when a coup against the country's then-president forced the airport to close, stranding citizens and foreign nationals alike. 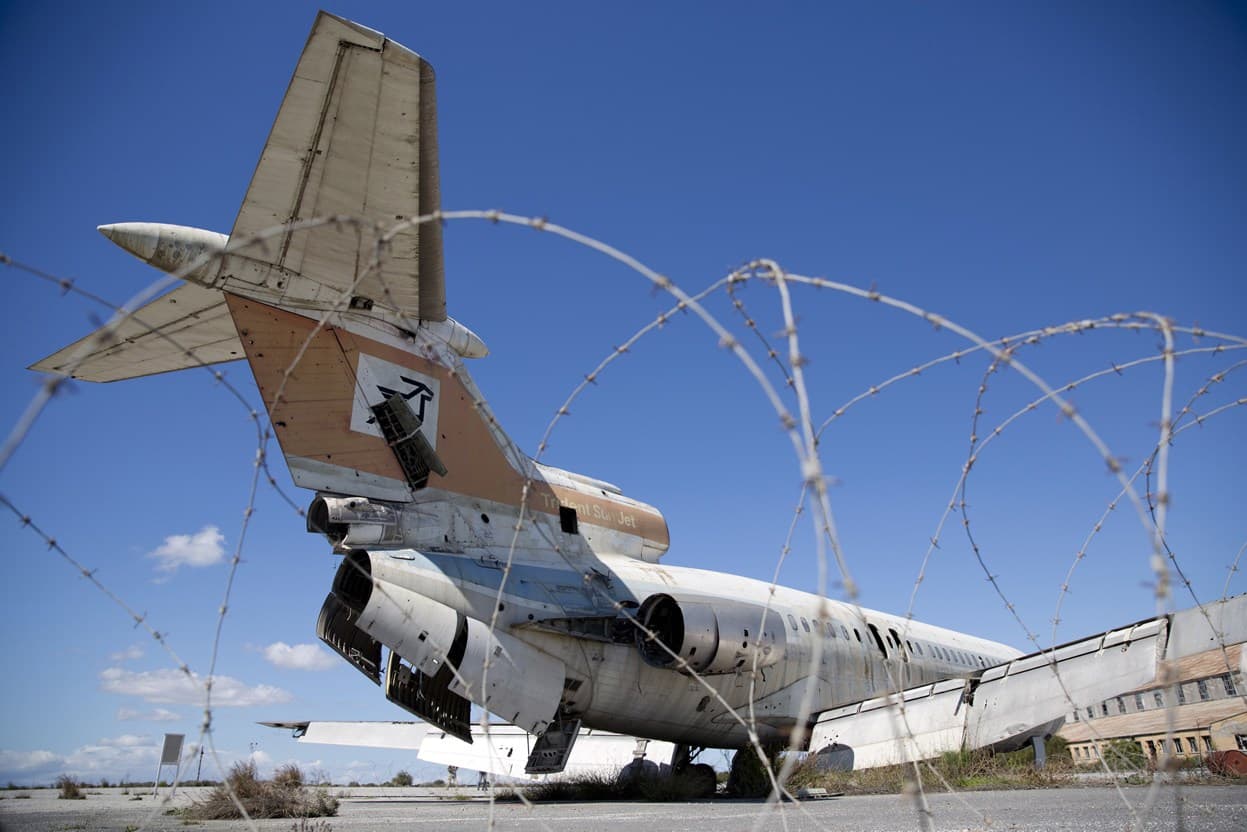 Above: Planes were abandoned on the runway when the airport was invaded (image courtesy of Neil Hall).

Reopened to allow foreigners to leave the island, the Turkish invasion just two days later, saw the area come under heavy fire, resulting in the facility being immediately evacuated and a number of aircraft being left abandoned on the runway.

While no longer actively at war, the island remains divided to this day with the airport now lying within the United Nations (UN) buffer zone between the two communities. 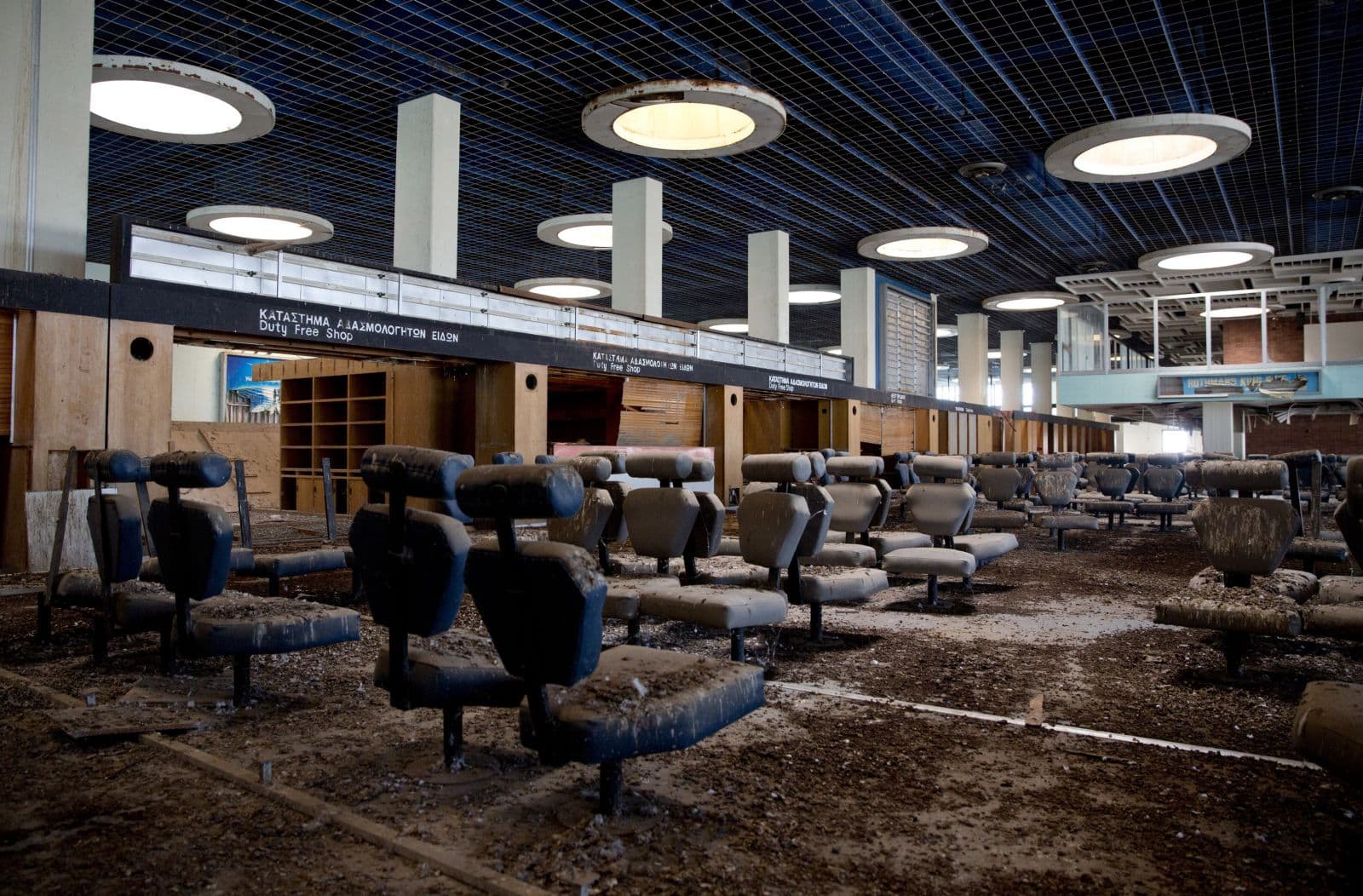 Above: The terminal building now lies disused and in a state of decay (image courtesy of Neil Hall).

Following failed negotiations by both parties to jointly operate the airport in 1975, new airports were constructed in both territories and the original facility was never returned to commercial operation.

Though a portion of the main building now operates as the headquarters for the UN Peacekeeping Force in Cyprus, the terminals, customs control area and runways remain eerily abandoned and have fallen into decay.

Constructed in 1928, the Canfranc International Railway Station in the Pyrenees was the second largest railway station in Europe at the time – measuring some 240 metres long – and became dubbed the “Titanic of the Mountains”.

The station was intended to operate as an interchange between France and Spain. Each country operated different gauge sizes on their respective railways, preventing services from running through into the opposite nation-state. As such, the station had to contain customs and transfer facilities for passengers, luggage and freight moving between the two countries. 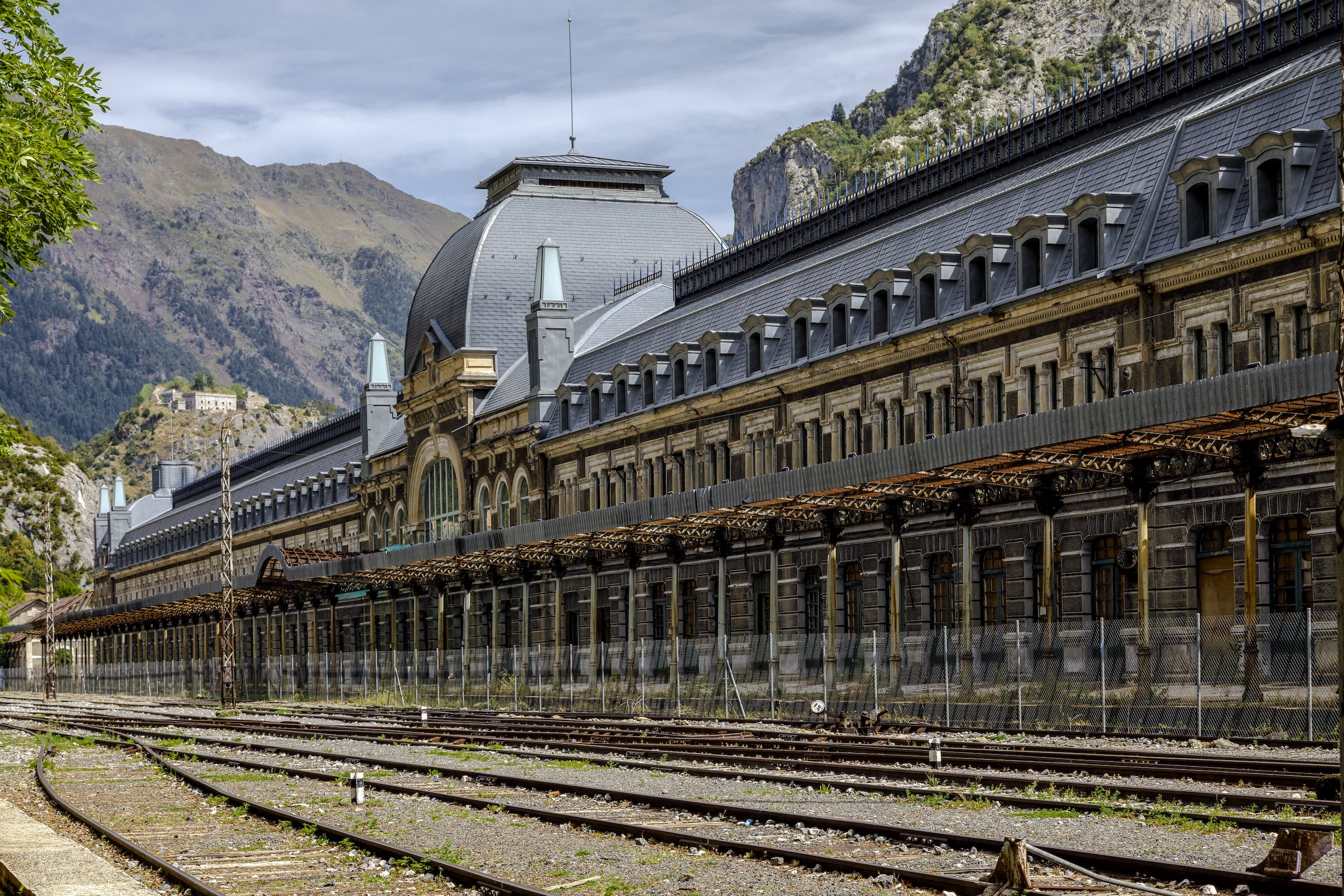 Above: The grand station in Canfranc, once the second largest in Europe.

Despite its then-state-of-the-art systems, the station was never used to its full potential due to the Spanish tunnels through the mountain range being sealed-off during the Spanish Civil War and dwindling use by civilians during the Second World War.

The final blow for the station came in 1970 when international rail services were permanently halted following a train derailment and subsequent bridge collapse on the French side of the Pyrenees.

Facing financial pressure, the French government decided not to rebuild the bridge and instead replaced the rail crossing with bus services.

While rail services were still able to operate from the Spanish side, the economic impact of the station now being a terminus rather than an interchange saw the population of nearby Canfranc fall sharply.

Above: The station's extensive platforms have long been devoid of passengers.

Though remaining abandoned and overgrown for nearly 50 years, the government of Aragon, in Spain, have now purchased the building with the intention to restore its historic structure and turn it into a hotel.

There are also plans to reopen the rail line, connecting the region to Bordeaux in France.

Perhaps the most well-known building on our list is the 105 storey Ryugyong Hotel; a vast tower that rises 330 metres above North Korea’s capital Pyongyang.

With construction works originally commencing in 1987 – and the building then being a contender for the world's tallest hotel – the project was abandoned in 1992 following the fall of the Soviet Union and the subsequent economic crisis that engulfed the country.

Above: The Ryugyong Hotel remained a shell of a building for almost 20 years.

Though the building had reached its full height prior to it being abandoned, no interior or exterior finishes had been applied to the structure and it stood as a hollow concrete skeleton over the city for many years, leading it to be nicknamed “The Hotel of Doom” internationally.

In 2008 the North Korean government together with Egyptian company the Orascom Group began an effort to complete the hotel and bring it into operation by 2012. 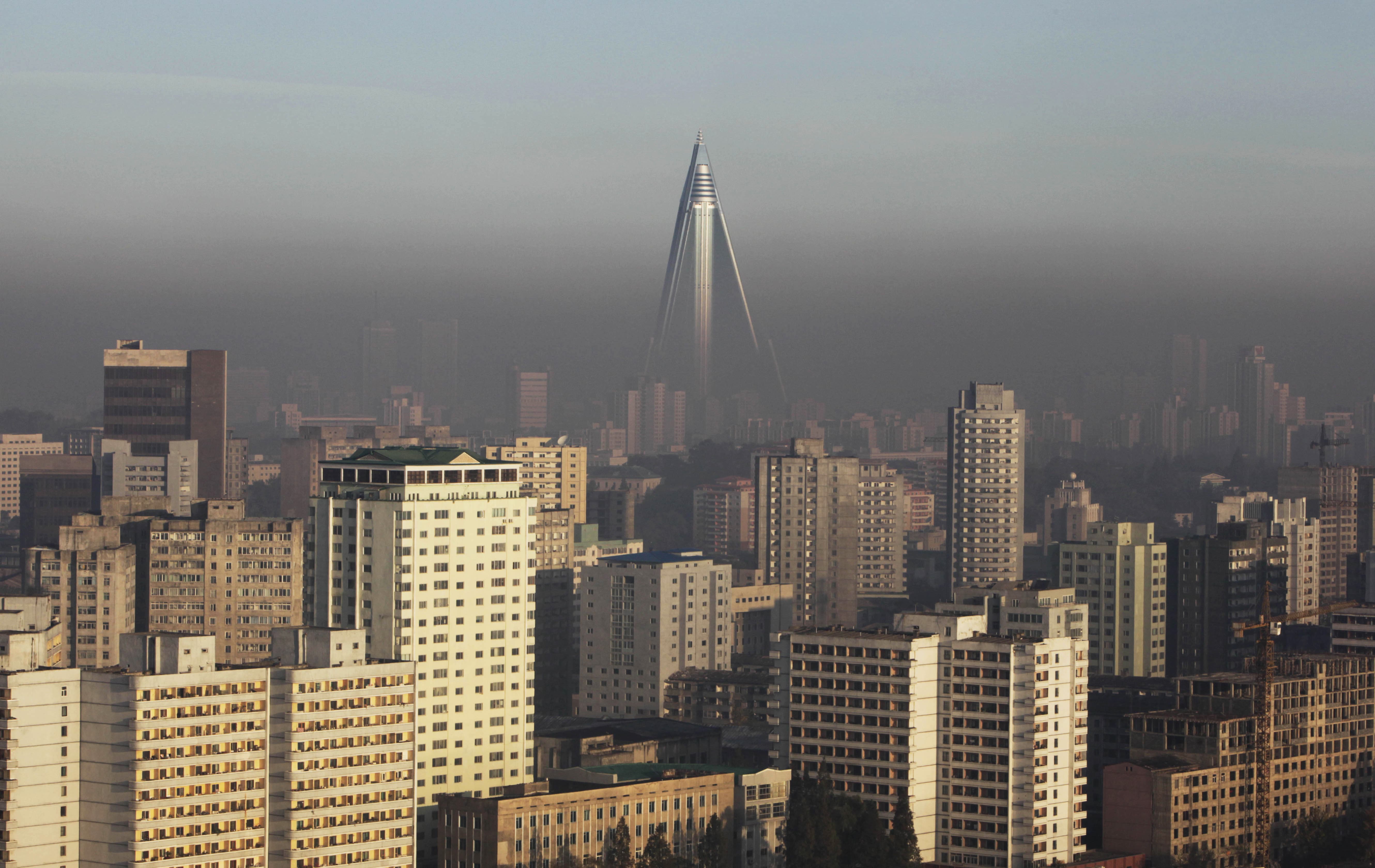 Above: Though the building's facade is now complete, the hotel has never hosted a guest (image courtesy fo Greg Baker).

Though this joint venture managed to complete the facade of the building, the interior was never finished and no hotel operator could be secured, resulting in the tower once again being abandoned without ever hosting a guest.

While there are numerous abandoned theme parks, it is often the case that a steady decline in patronage simply renders them financially unviable, leading to their closure.

This was not the case for Six Flags New Orleans.

Originally named "Jazzland", the park was purchased in 2002 and reopened under the Six Flags banner in 2003.

Plans were developed to improve and expand the attraction with additional rides and a water park to bring it in line with other Six Flags resorts.

Above: Six Flags New Orleans in the aftermath of Hurricane Katrina in 2005 (image courtesy of Bob McMillan).

Sadly, these plans were never realised. In August 2005, Hurricane Katrina struck New Orleans, overwhelming flood defences and devastating much of the city.

Located in a low-lying area, the park sat submerged in some seven feet of seawater for over a month before pumps could dewater the site.

With over 80% of the buildings and rides destroyed by wind and rust, and Six Flags unable to settle claims with their insurers, the park was closed indefinitely. 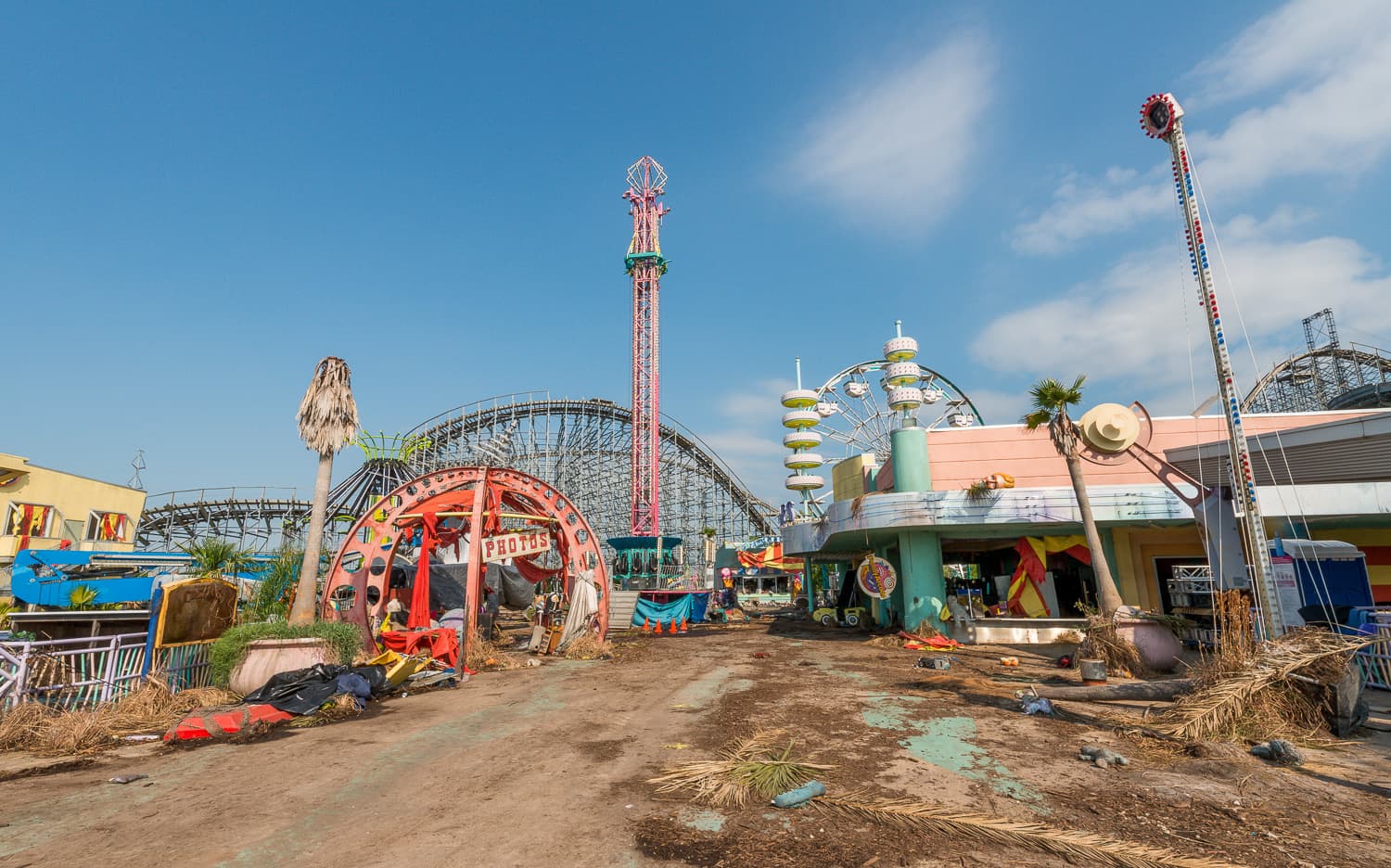 Above: Six Flags filed for bankruptcy in 2009 and their New Orleans park remains abandoned (image courtesy of Edin Chavez).

With Six Flags filing for bankruptcy in 2009, the park is now owned by the City of New Orleans.

Though many plans have been put forward to redevelop the site, none have yet come to fruition.

Founded in 1970, Pripyat was built by the Soviet Union and was the main city servicing the Chernobyl Nuclear Power Plant just three kilometres away.

Expanding rapidly since its founding, the city contained more than 20 schools, a hospital, sporting and recreation facilities, a cinema and an amusement park for its population of almost 50,000 people. 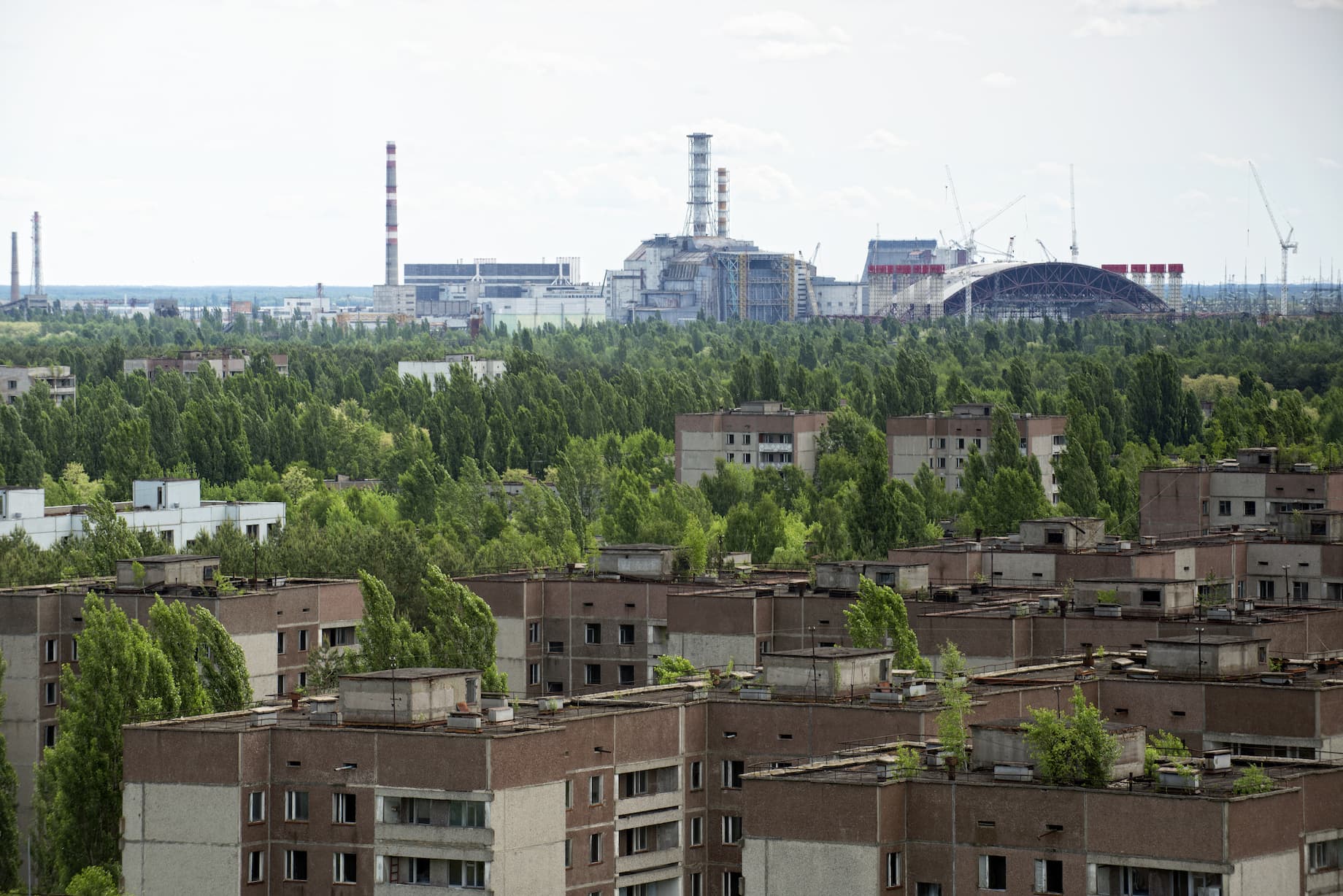 Above: The city of Pripyat was built in the shadow of the Chernobyl Nuclear Power Plant.

However, Pripyat’s future transformed in the space of just a few hours in 1986 in the immediate aftermath of the Chernobyl Nuclear Disaster.

The entire city was evacuated with residents and workers abandoning everything as the extent of the meltdown became apparent.

Located within what was established as the Chernobyl Exclusion Zone, residents were unable to return to Pripyat and were instead relocated to the city of Slavtych which was purpose-built to house those displaced by the disaster. 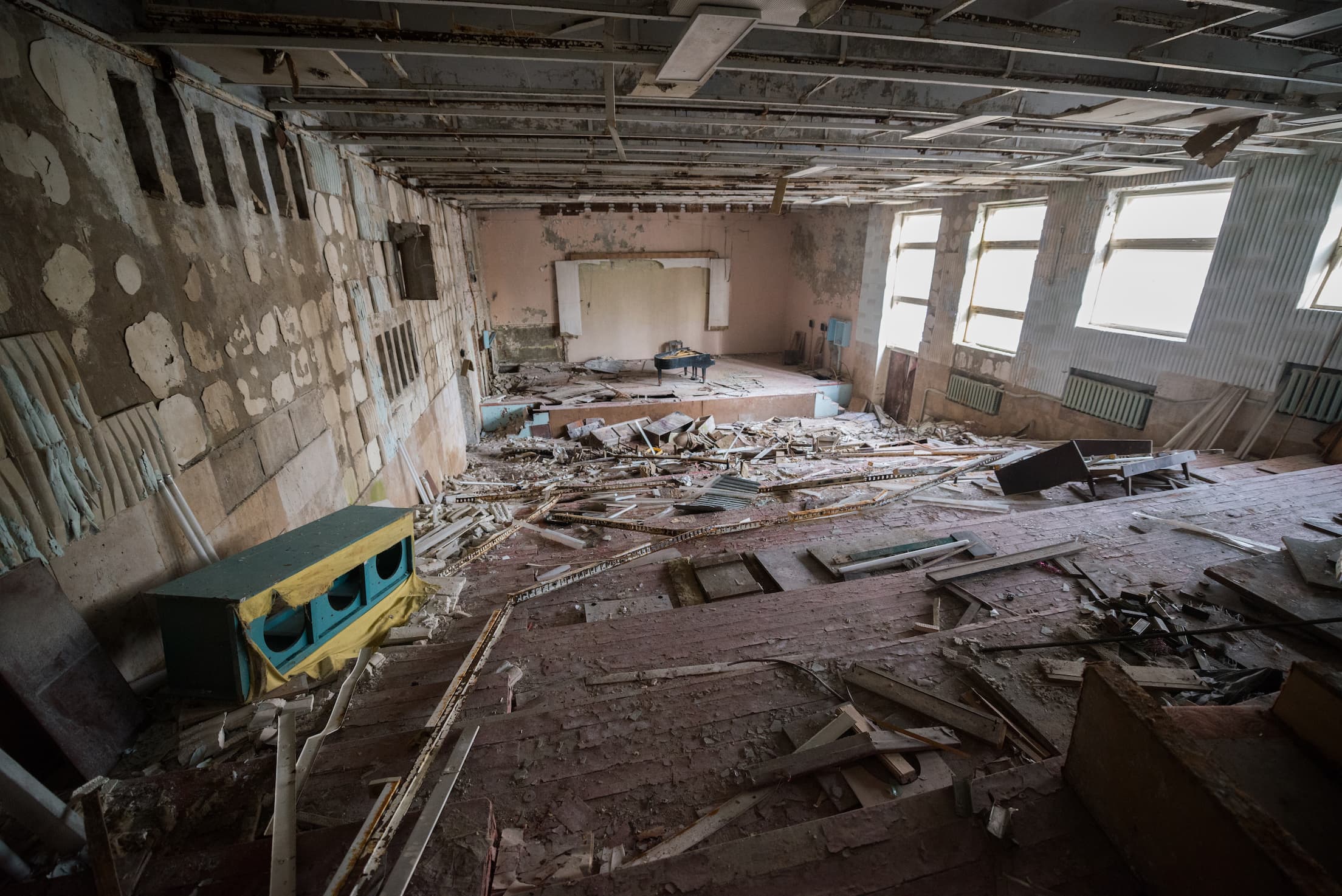 Above: Many buildings in the city still resemble how they were left on the day of the evacuation.

While nature has steadily begun to reclaim the city, Pripyat has remained frozen in time for over 30 years, with many buildings still resembling how they were left on the day that the population was evacuated.

Do you know of any other abandoned buildings that have an intriguing story to tell? Let us know in the comments below.