GRAPHISOFT Park is a beautiful place. Walking through it on a clear December morning with the Danube flowing alongside you and shafts of sunlight falling through the trees, it’s easy to understand why people love to work here.

The Park’s campus design makes it feel remarkably similar to the tech-giant headquarter sites of Palo Alto. Though with the hard frost on this particular morning it feels a long way from California.

We’re at the home of GRAPHISOFT in Hungary; a world-leading design software company that has grown with the success of its flagship product ARCHICAD.

It’s a struggle to find people with a bad word to say about this business. Their customers love their products and are actively engaged in their development; the business is passionately committed to Open BIM principles; those who pick up ARCHICAD rarely switch to anything else. But to truly understand and respect this organisation, you need to learn of their remarkable story.

And that’s why we’re here. Crossing the immaculate lawns and (frozen) landscaped parklands, we enter a building and meet Gábor Bojár, Founder of GRAPHISOFT. 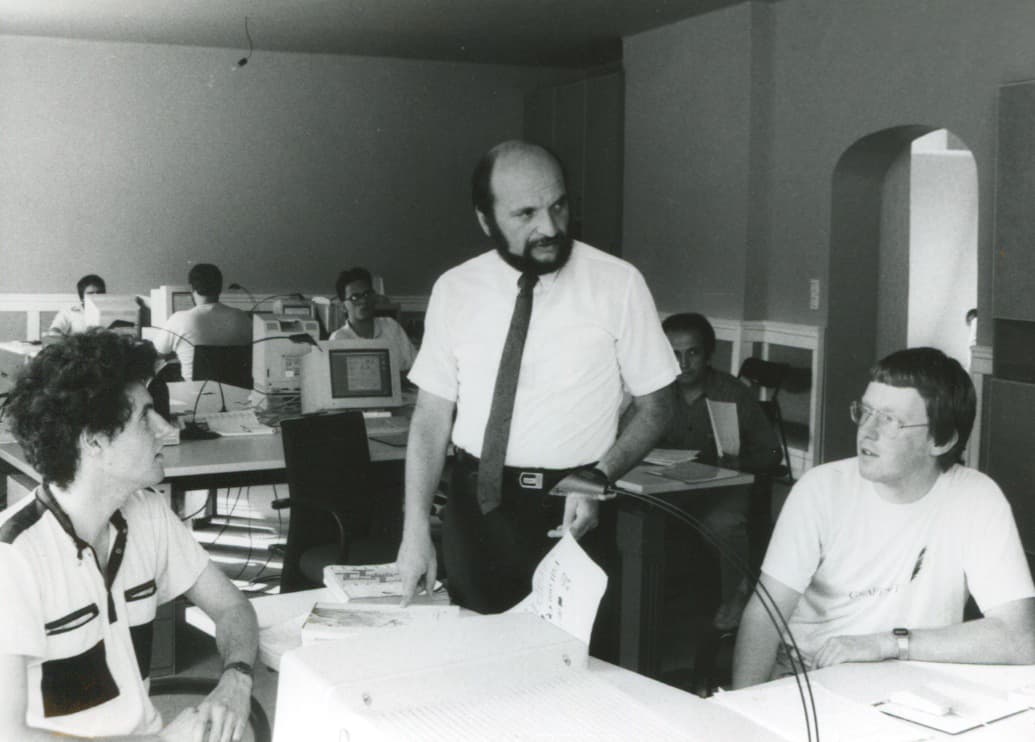 Above: Gábor Bojár founded GRAPHISOFT in the early 1980s (image courtesy of GRAPHISOFT).

After the Second World War, Hungary became part of the Eastern Bloc; a communist satellite state of the Soviet Union. Bojár grew up in this environment and experienced first-hand the working culture it engendered. Rather than encouraging his development, Bojár’s first boss felt his own job was under threat when Bojár proved himself capable.

“Selection of mediocre people is built into the communist system, that’s why the system does not work” he explains. “At that time I started to dream about how great it could be if I could have my own company, and my goal would be to select the best people. Select people who are better than me."

"My goal would be to select the best people. Select people who are better than me”

The irony is that Hungary’s communist history was a major factor in GRAPHISOFT’s success. When it became possible to set-up private firms, Bojár immediately left his job and established GRAPHISOFT, quickly attracting a highly capable team who relished being rewarded for their skills.

“At that time I had no idea what we would do” explained Bojár. “The mission of GRAPHISOFT was just to find and motivate the best people." 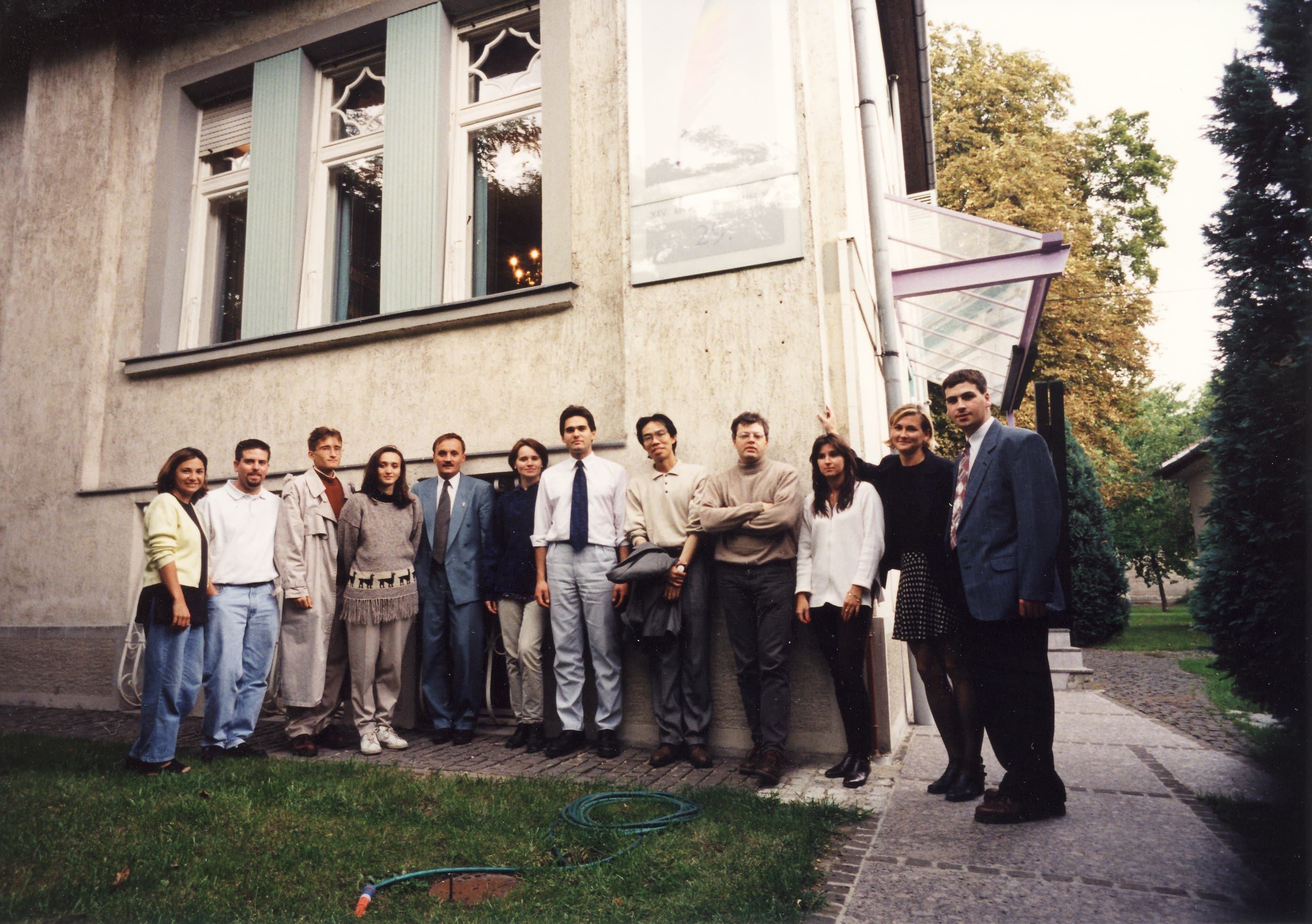 Above: GRAPHISOFT's fledgling team in the early 1980's (image courtesy of GRAPHISOFT).

Bojár and his team were expert in three-dimensional mathematical modelling but found themselves without access to the most up-to-date or powerful computers. This constraint bred their development of 3D modelling software that could be used on inexpensive personal computers.

They then saw a market-niche in providing such software to architects.

Viktor Várkonyi – now GRAPHISOFT’s Chief Executive – recalls: “We came to the market with a quite revolutionary idea that architects should not draw, but they should close their eyes, think in spaces and spend their creative energy on shaping their buildings." 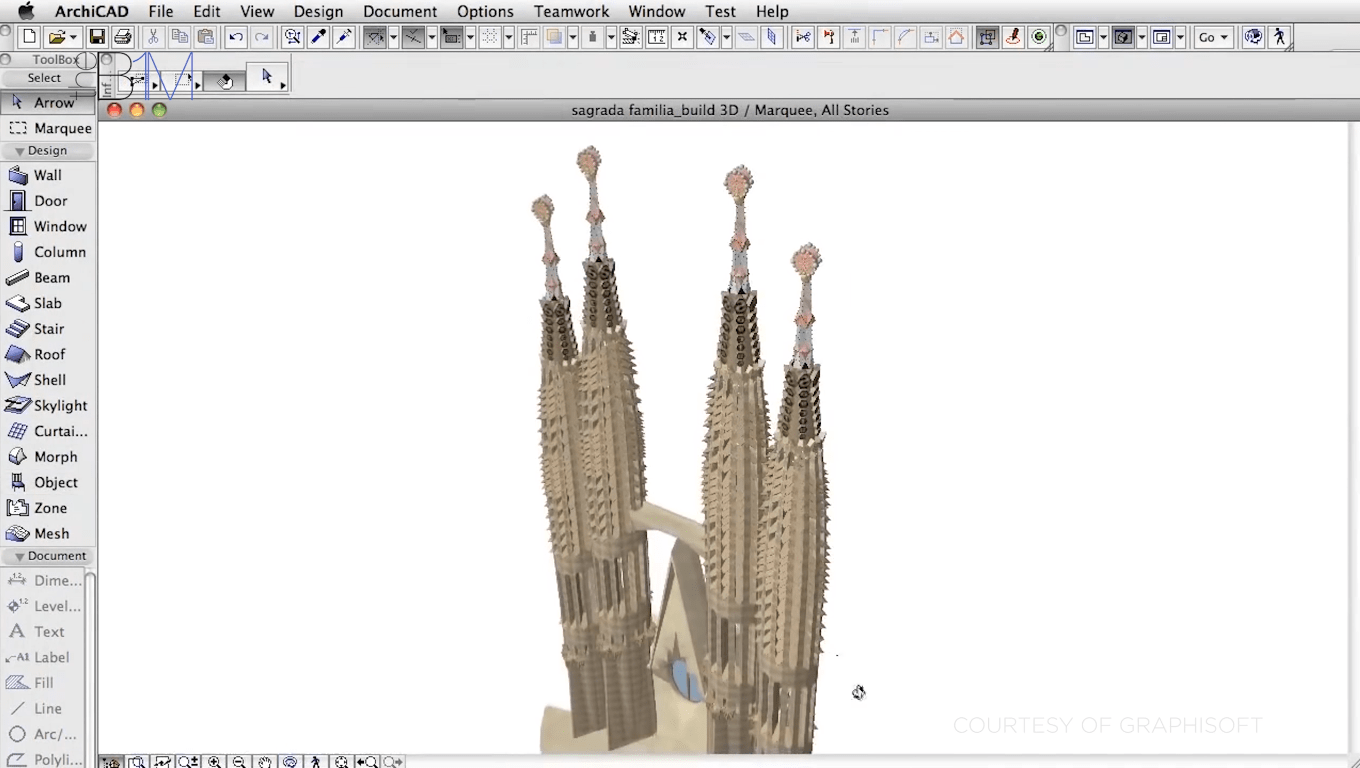 Above: The company's flagship product ARCHICAD is now widely used by design and project teams around the world (image courtesy of GRAPHISOFT).

Early in their development, GRAPHISOFT sought out a hardware partner to develop and distribute their product with. In a world developing powerful and expensive computers, Apple were leading the way in the personal computer market.

GRAPHISOFT’s relationship with Apple kicked-off at Hannover's CeBIT trade show where their software was being demonstrated on a Macintosh. A surprise visit by Steve Jobs saw Apple’s marketing team work through the night with GRAPHISOFT to compress a half-hour presentation down to just 5 minutes for Jobs to see the next day. As it turned-out, Jobs spent a full half hour with the GRAPHISOFT team, asking lots of questions and wanting to learn more about their product. 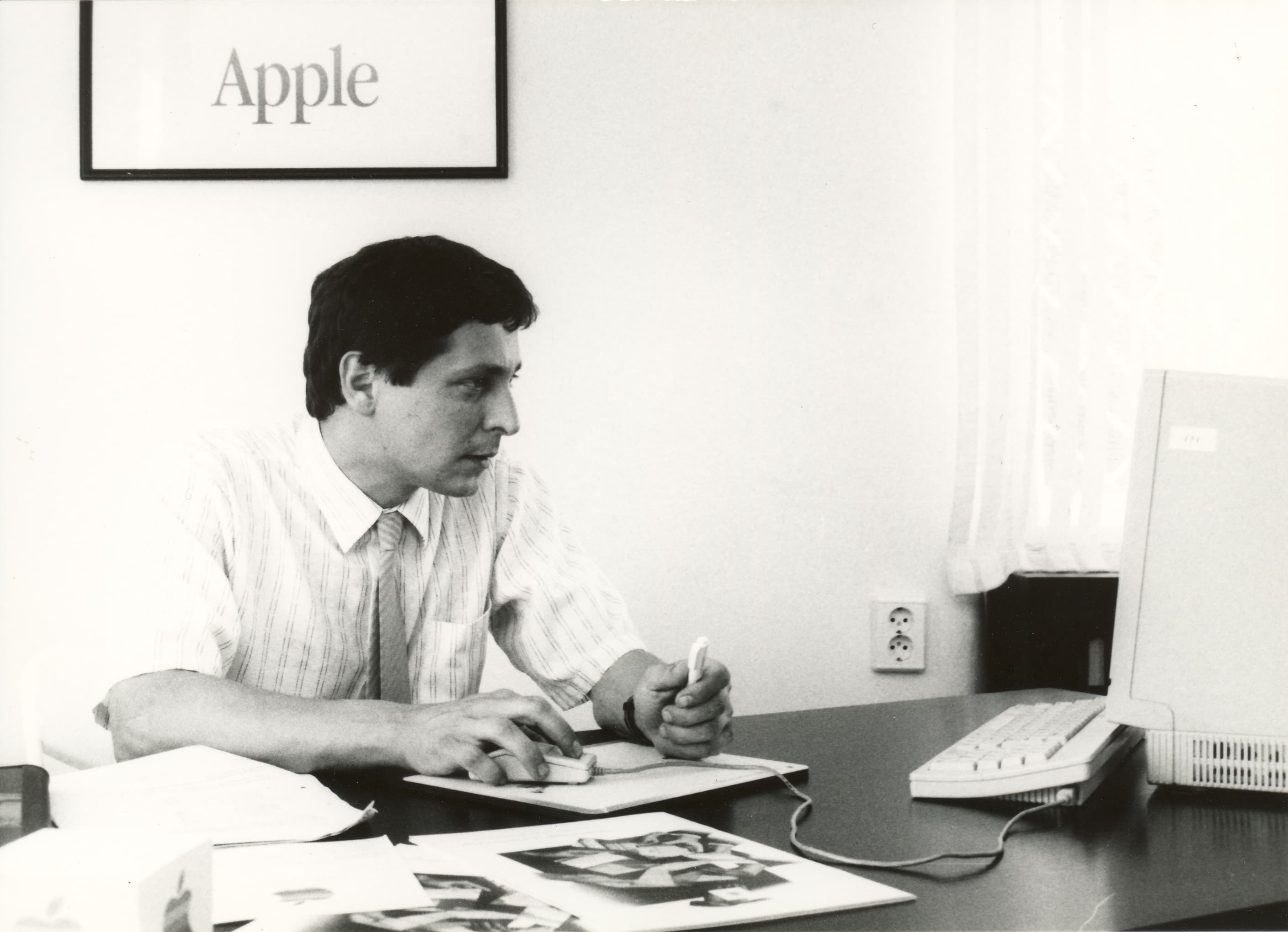 In Apple, GRAPHISOFT found a partner that could distribute their product to a mass-market – and in particular to architects – substituting the need for venture capital in order to scale.

“The support of Apple was absolutely critical for our growth” explains Bojár. “From Apple we got not just computers, not just a kind of morale support, but also access to the reseller network; that was the most important.If we’d had to build that reseller network alone, we probably would not have succeeded.”

"The support of Apple was absolutely critical for our growth. We got not just computers, not just a kind of morale support, but also access to the reseller network"

Apple support aside, what’s striking about GRAPHISOFT is the importance they place on their people; an ethos that stems right from their founder.

“If you can attract the best talent, it will be easy to attract the best customers” Bojár explained. “The Hungarian environment was an absolute competitive advantage for us, because there were no other opportunities for young talent."

This competitive advantage of course eroded as time went by, as technology advanced and as the world became more connected. To continue to compete, GRAPHISOFT invested in an impressive campus to the north of Budapest, now known as GRAPHISOFT Park. The site acts as the firm’s global headquarters and is home to numerous technology businesses including Microsoft, SAP and Canon. 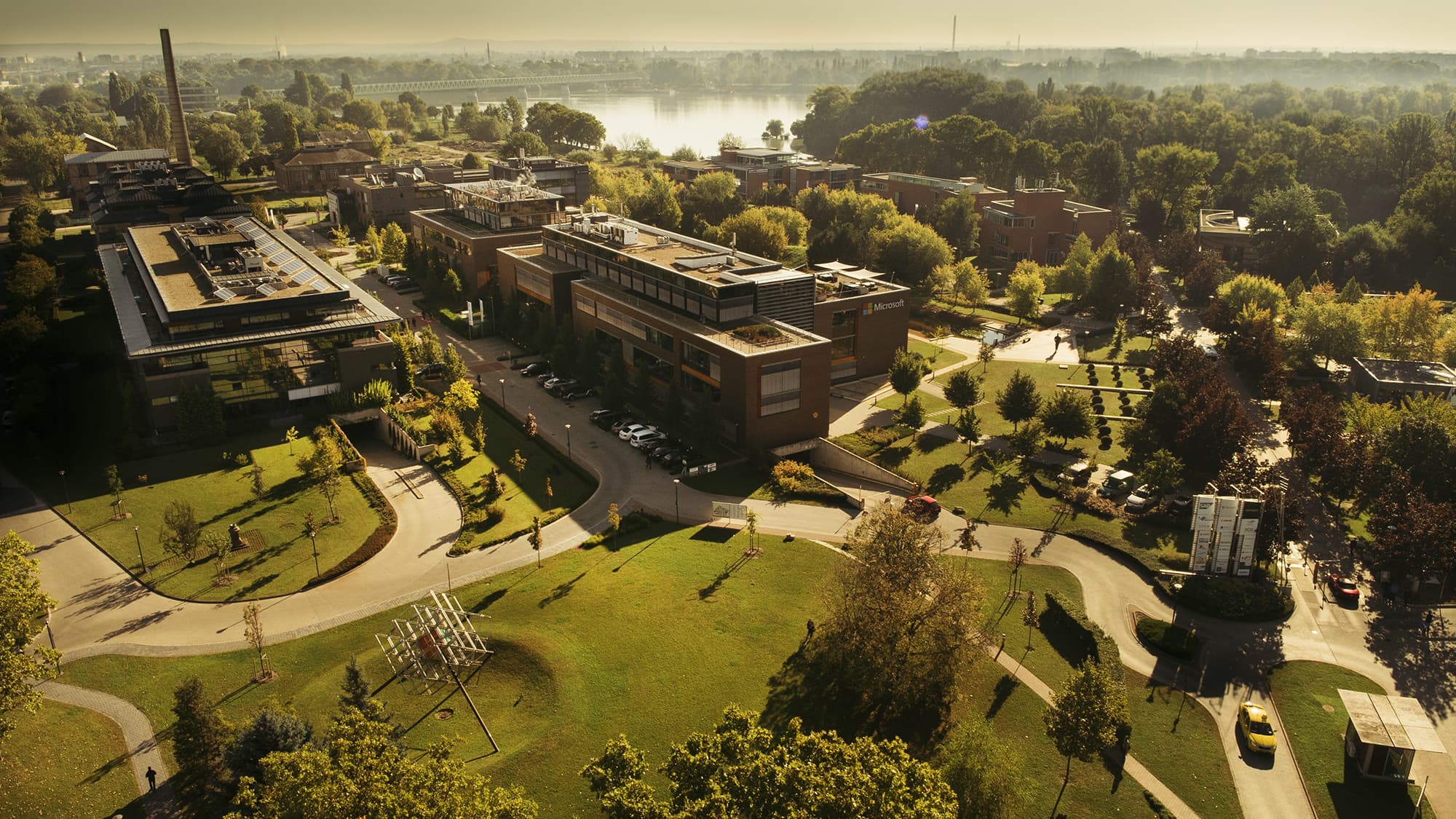 Above: GRAPHISOFT Park is located to the north of Budapest in Hungary (image courtesy of GRAPHISOFT).

Having grown into a global brand with a flagship product that is used by countless design and project teams around the world, the company stays true to the values that made it successful. “Here in Hungary, [GRAPHISOFT] is a very influential and big company” explains Várkonyi. “But internally we still share the kind of same mind-set that I experienced 25 years ago: that we have a great dream and we just want to change the world.”

GRAPHISOFT became part of the Nemetschek Group in 2007. Bojár is now Chairman, with day-to-day operations overseen by Várkonyi. He remains based on the Park developing the Aquincum Institute of Technology (AIT); a teaching establishment he founded. 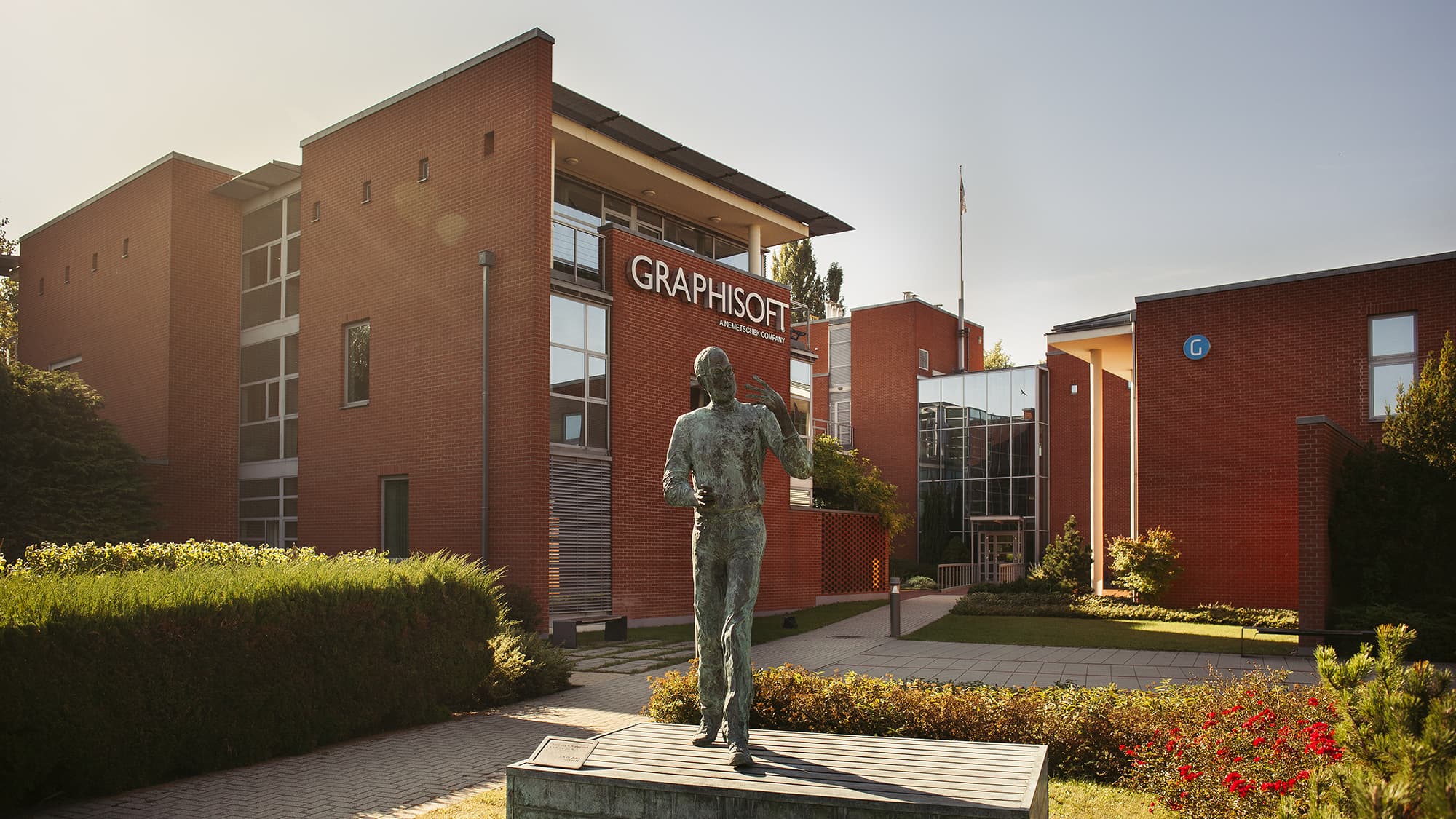 Above: The statue of Apple founder Steve Jobs outside GRAPHISOFT's global headquarters in Hungary (image courtesy of GRAPHISOFT).

Stepping out of the interview filming with Bojár and Várkonyi and back into the freezing air, I feel a heightened sense of respect for the buildings and parkland that surround me. They feel in some way monumental to an organisation that grew against all the odds in a communist environment into a progressive world leading technology provider.

Walking past the main entrance and the statue of Steve Jobs, we climb into a taxi and begin racing down the side of the Danube back towards the centre of Budapest. I am reminded that so many buildings have been designed and developed in ARCHICAD and other GRAPHISOFT products that the firm’s impact now extends well beyond parkland in Hungary.

Before we left I asked Bojár if he had any advice for budding entrepreneurs. His reply was a simple one: “Never look for the best market. You should look for the market where you can be the best.”

You can learn more about GRAPHISOFT here.

This documentary was shot on location by The B1M at GRAPHISOFT Park in Hungary. Watch capture of the drone footage (broadcast live on Facebook). Library images courtesy of GRAPHISOFT.