IT IS one of the most recognisable buildings in the world. Positioned on the water’s edge and overlooking the famous harbour, Sydney Opera House is an iconic structure that is synonymous with Australia.

Though it now appears to float effortlessly on water, this landmark building took some extreme engineering and over a decade of construction works to become a reality.

In 1955, when the New South Wales Conservatorium of Music outgrew their home at Sydney Town Hall, premier Joseph Cahill launched an international design competition for a dedicated opera house.

After reviewing 233 entries from architects in 32 countries, the judges declared Danish architect, Jørn Utzon as the winner of the competition in 1957 - despite his entry comprising largely of diagrammatic drawings and simple sketches.

Above: Utzon with a model of his winning design (State Library of NSW, Australian Photographic Agency).

Following his win, Utzon proceeded to refine the building plans. However, in order to capitalise on strong public support for the project at that time, and to ensure its funding, the New South Wales government pushed for works to begin early, in 1959, before the scheme’s design had been finalised.

With an initial budget of AUD $7M, and an expected completion date of January 1963, the push to begin construction without a finalised design and before solving crucial structural design challenges caused the project to be delivered 10 years behind schedule and more than 14 times over budget.

The construction of Sydney Opera House was planned in three distinct stages.

The first would consist of the structure’s podium, the second would see formation of the iconic outer shells, and the final stage would focus on internal fit-out of the concert halls and other open spaces. 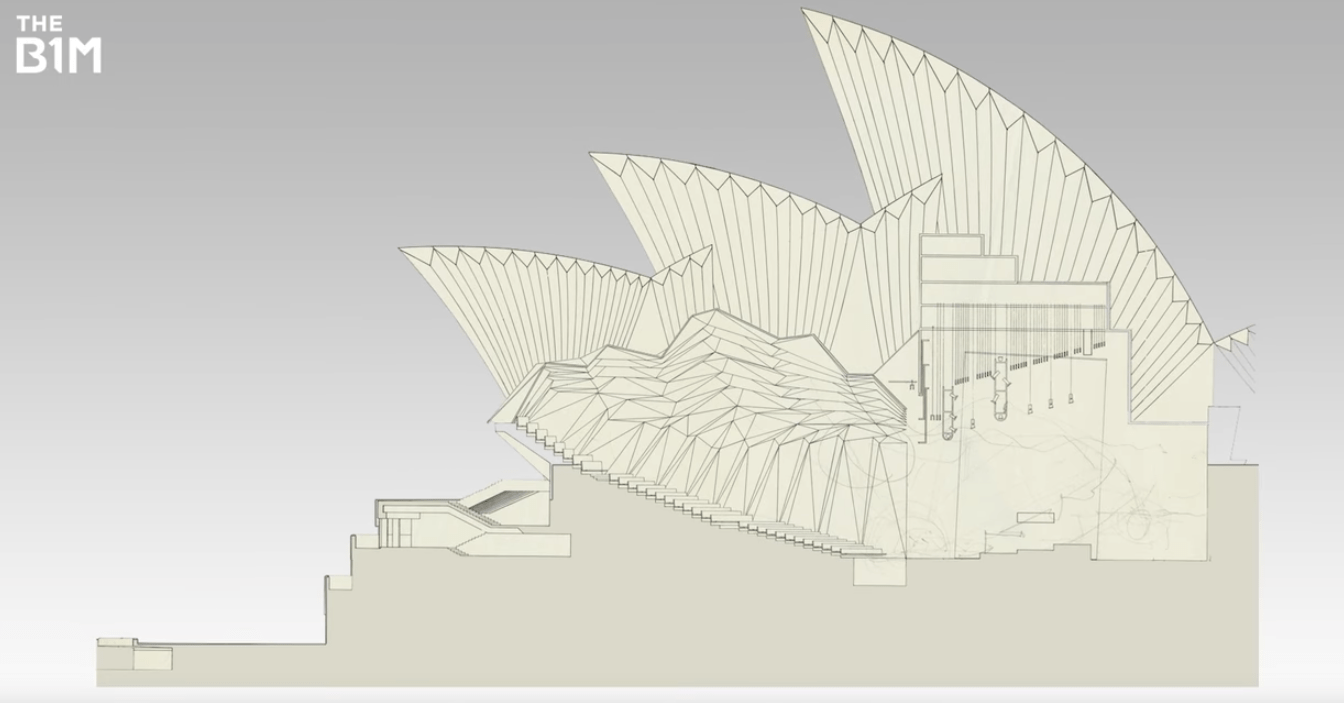 Above: A cross section of the main concert hall of the Sydney Opera House (image courtesy of State Archive and Records Authority NSW).

In March 1959 construction began on some 588 concrete piers to support the 1.8 hectare building.

By 1961, the project was already facing delays significant delays and work was more than 47 weeks behind schedule - partly to inclement weather but mostly due to the lack of completed proposals.

To give just one example of the impact this had, the support columns for the building's roof were installed before the roof itself had been designed. When the full extent of the roof structure was determined and finalised, the columns proved too weak to support it - resulting in all of them being taken out and replaced. 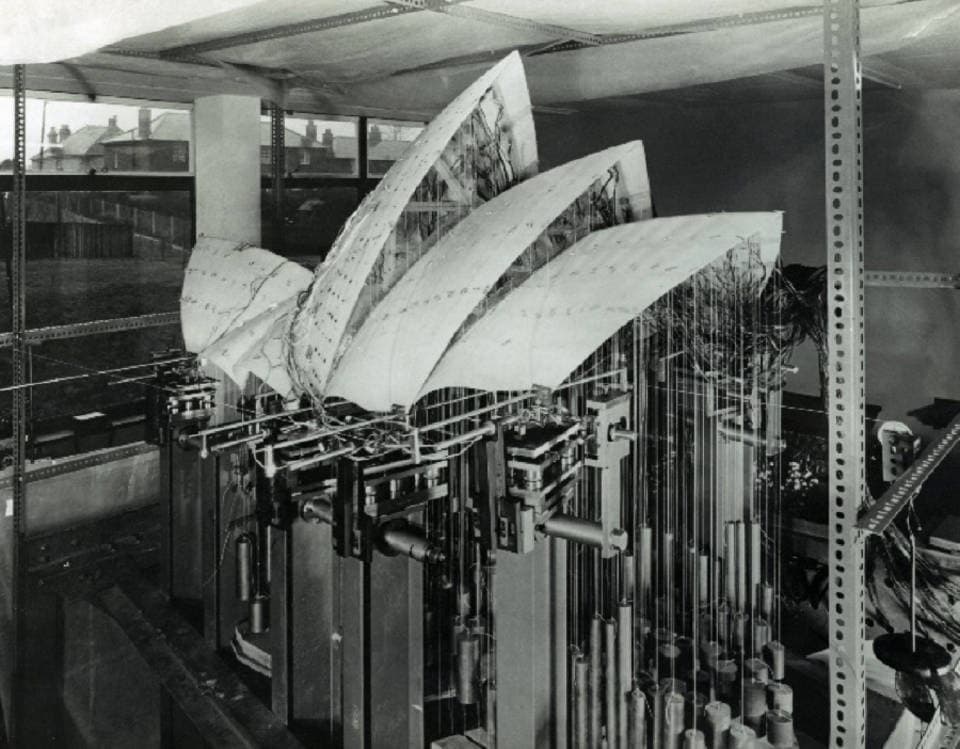 Above: The sails for the building's roof were among the first structures to undergo computer analysis (image courtesy of ARUP).

Construction of the sail-like structure that gives the opera house its iconic shape made up the bulk of the project’s second phase.

While the shells of Utzon’s design were a key part of his winning submission, no one at the time knew of a cost-effective way to construct these large, non-repetitive forms. In an effort to find an economical solution, the roof was re-designed at least 12 times.

The project was one of the first to use computers to run structural analysis on the designs, allowing the project team to understand the complex forces that the roof shells would be subjected to.

Eventually, a solution was reached that would see the curved roof shells cast as sections of a single sphere.

While the individual responsible for this breakthrough remains unconfirmed, it is rumoured that Utzon himself came up with the solution while peeling an orange.

By treating each shell as sections of one sphere, arches of varying lengths were able to be cast in a common mould. 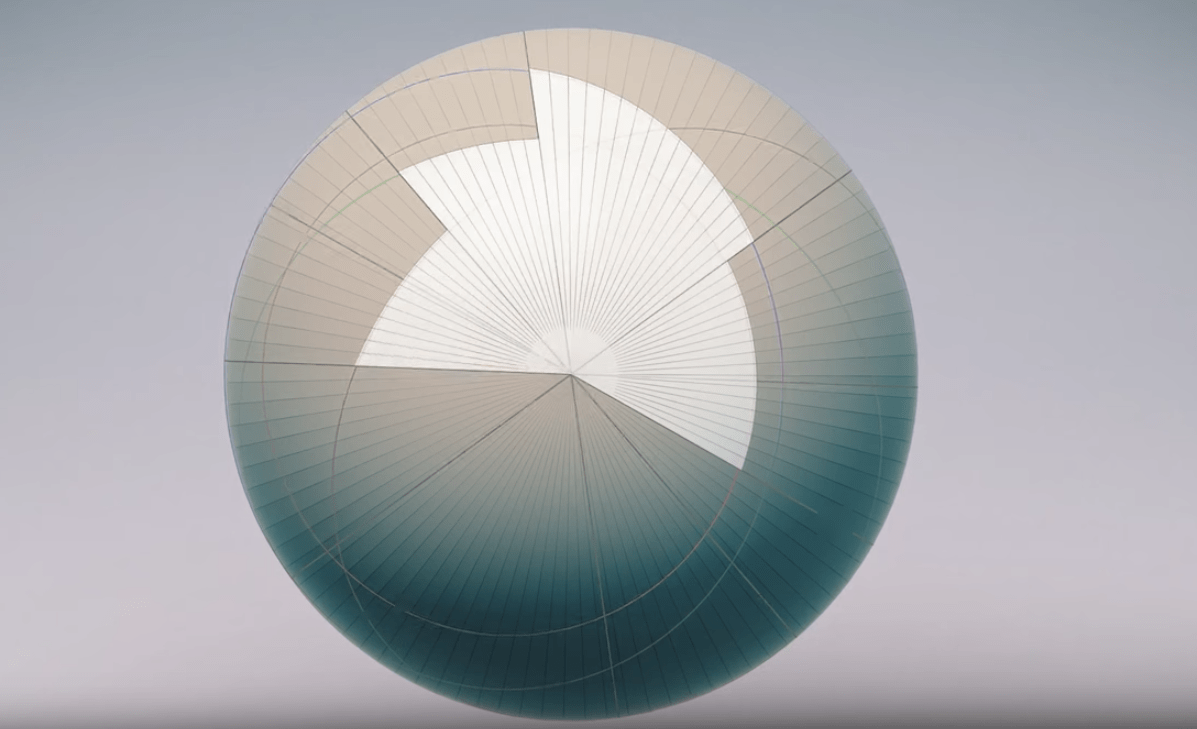 Above: The "Spherical Solution" made the construction of the iconic roof possible (image courtesy of www.latchkey.co)

In total, more than 2,400 precast ribs and 4,000 roof panels were manufactured this way in an on-site factory, avoiding the need to cast the shells in-situ and the high formwork costs this would have entailed.

Once installed, the roof’s structure was finished with more than a million white and cream tiles, giving it the appearance we see today.

A CHANGE OF TUNE

As works progressed, Utzon relocated his office to Sydney in 1963.

However, when the government changed just two years later, the project was placed under the jurisdiction of the Ministry of Public Works. The new government had long been outspoken critics of the project and tensions around its delivery steadily began to grow.

Following several threats of resignation, Utzon finally left the project in February 1966, with more than AUD $100,000 owed to him in unpaid fees. 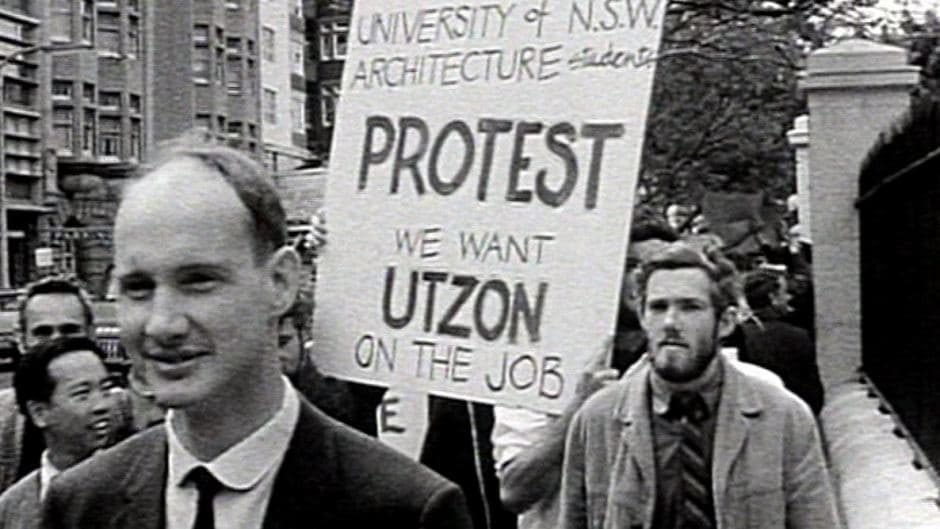 Above: Students protest in Sydney after Utzon resigns from the project (image courtesy of the Australian Broadcasting Corporation Archives).

Despite public outrage and protests in Sydney demanding that he be reinstated as lead architect, Utzon left Australia, never to return or see the project completed.

The multi-purpose “major hall”, which was to host both concerts and opera became solely a concert venue, while opera and ballet productions were planned to take place in the “minor hall” which became known as the Opera Theatre, until it’s renaming as the “Joan Sutherland Hall” some years later.

Utzon's original acoustic and seating proposals for the major hall were considered insufficient and led to a re-design which still caused acoustic problems for performers and orchestras on completion.

AN ICON IS BORN

After 14 years of construction, Sydney Opera House was officially opened by Queen Elizabeth II on 20 October 1973 in a televised event that featured fireworks and a performance of Beethoven’s, Symphony No. 9.

Utzon was not present at the opening, nor mentioned during the ceremony - and it wasn’t until the 1990s that the Sydney Opera House Trust appointed him as a design consultant for future works on the building.

Above: Sydney Opera House alongside the Harbour Bridge (image courtesy of Adam J.W.C.)

Utzon was awarded architecture’s highest honour - the Pritzker Prize - in 2003, and works to rectify the building’s interior have been ongoing since 2004.

Works on the Joan Sutherland Theatre began in 2017 and the concert hall will undergo renovation between 2020-2021.

Despite these ongoing works - and the years of engineering, professional and logistical challenges to bring the structure into existence - Sydney Opera House is now synonymous with the city that surrounds it, and has become an enduring symbol of the Australian nation.

Learn more about Sydney Opera House and its construction here.