PROJECT CAPELLA is a £79M new biomedical research laboratory for the University of Cambridge that is being delivered by Kier Construction. In this powerful documentary, we join the project team and discover how building information modelling (BIM) has helped take the project from concept to reality!

The state-of-the-art Capella facility is being developed on the University’s Biomedical Campus to the south of the city. Its site is positioned between a number of other buildings and construction sites, including that of the vast New Papworth Hospital.

The seven storey structure is formed largely of prefabricated materials; it’s pre-cast concrete frame, panelised façade and steel frame upper-level all contributing to a rapid 42 month construction period, down from the 60 months originally anticipated. Such an approach demanded detailed planning and highly accurate co-ordination at design stage. And that’s where BIM comes in.

Kier Construction take the refreshing approach of attempting to progress all their schemes in a BIM Level 2 environment unless circumstances dictate otherwise. “We have our internal gateway process and by default a project will be BIM unless there are a number of reasons why it cannot be implemented” explains Andy Boutle, the contractor’s Senior BIM Manager for the Capella scheme. 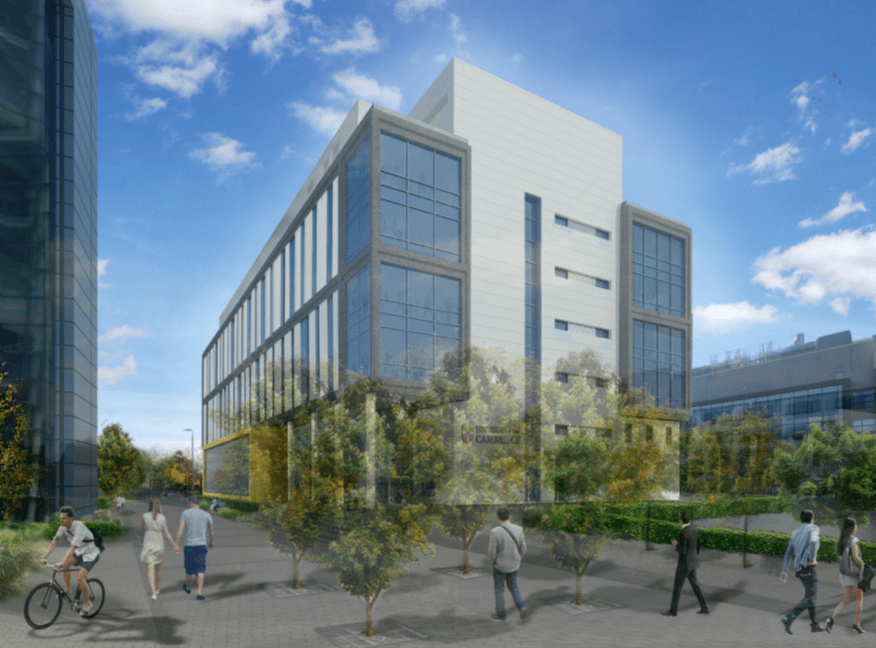 The new laboratory was the perfect fit. It was also well timed from the University’s perspective: “This has been a trailblazer in a way for setting up our BIM processes” explains Chris Hinton, Senior Technical Specialist for IT in the Cambridge Estate Management team. 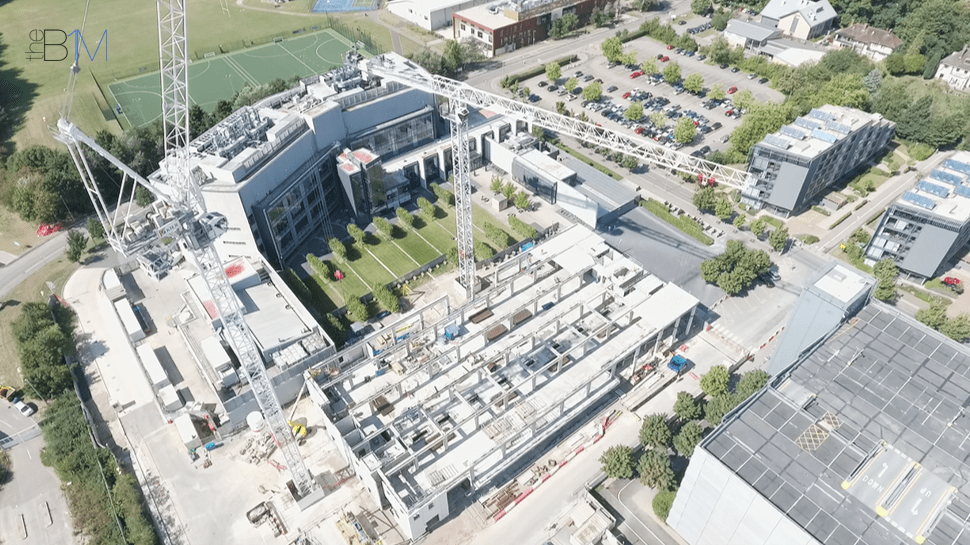 Above: An aerial view of the Project Capella construction site taken by The B1M's drone in August 2016.

Kier and their consultant design team were appointed under a two-stage JCT Design and Build contract at RIBA Stage 1, developing the scheme right from its initial concept.

Such an early engagement paid dividends in establishing protocols and the parameters for working in a BIM environment. An initial ‘BIM kick-off’ meeting was attended by the client, contractor and principal designers before work started.

Helping the University hone their processes, Kier worked closely with Cambridge to develop a project-specific employer’s information requirement (EIR) in the early stages. “We did a lot of ‘reverse engineering’” explains Hinton “taking what we had in our EIR, going back to Kier and their supply and seeing what they were answering in their BIM execution plans (BEPs). We’re getting to the point now where not only does [the EIR] satisfy what the University wants, it allows the supply chain to actually deliver it”.

The team used BIMXtra as their common data environment (CDE); an online space for collating and managing the project’s graphical and non-graphical information. Access was made available to all parties on the project ensuring everyone could quickly locate and work from the latest information.

Boutle established a fortnightly cycle of ‘model information exchanges’ with his team where each consultant and sub-contractor added their model geometry and data to the CDE. Those models where then combined (‘federated’) in time for the bi-weekly design co-ordination workshops that explored interfaces and developed the design.

A scheme of Capella’s complexity generates a significant amount of data and the file size of the total federated model quickly became unmanageable. “You wouldn’t want to federate all the models together at one time” says Boutle. “We would set an agenda for our co-ordination workshops and see which bits we wanted to look, federating just those elements as required”.

Dave Jones, an architect with The Fairhursts Design Group (FDG) who designed Project Capella highlighted how BIM aided the design process: “It made you think: how is this going to be built? How is it going to be phased? How is it going to be brought to site? It created lots of questions for you to answer at any early stage, which is good because you don’t then go down a design process and find that there’s a significant problem.”

Above: A section through the federated graphical information model and Below: linking of graphical objects (in this case a door) with non-graphical data (images courtesy of Kier Construction). 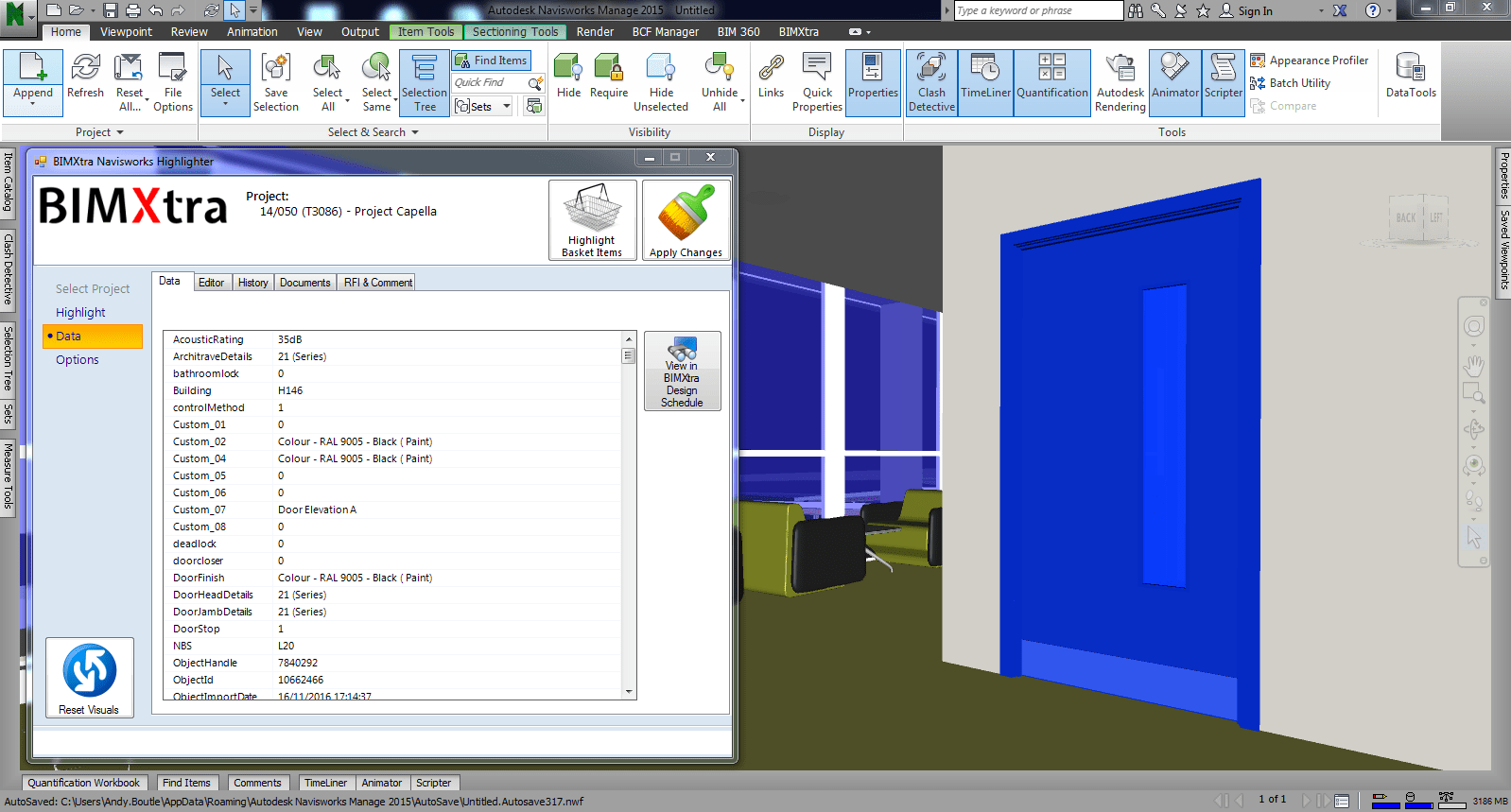 As you might expect, the mechanical, electrical and plumbing (MEP) fit-out of a biomedical research lab is very advanced. The MEP systems were modelled in a BIM environment by Arup who collaborated with contractor SES Engineering Services from RIBA Stage 3 to finalise the installation.

"It created lots of questions for you to answer at any early stage, which is good because you don’t then go down the design process and find that there’s a significant problem”

“That co-ordination of the design to enable us to start on site was helped a lot by BIM” explained Andrew Taylor, Kier’s Senior Planner on the Capella scheme. “The co-ordination between the pre-cast concrete frame and the MEP was important. We had to get the MEP integrated within the frame and that has to be fixed at any early stage.” 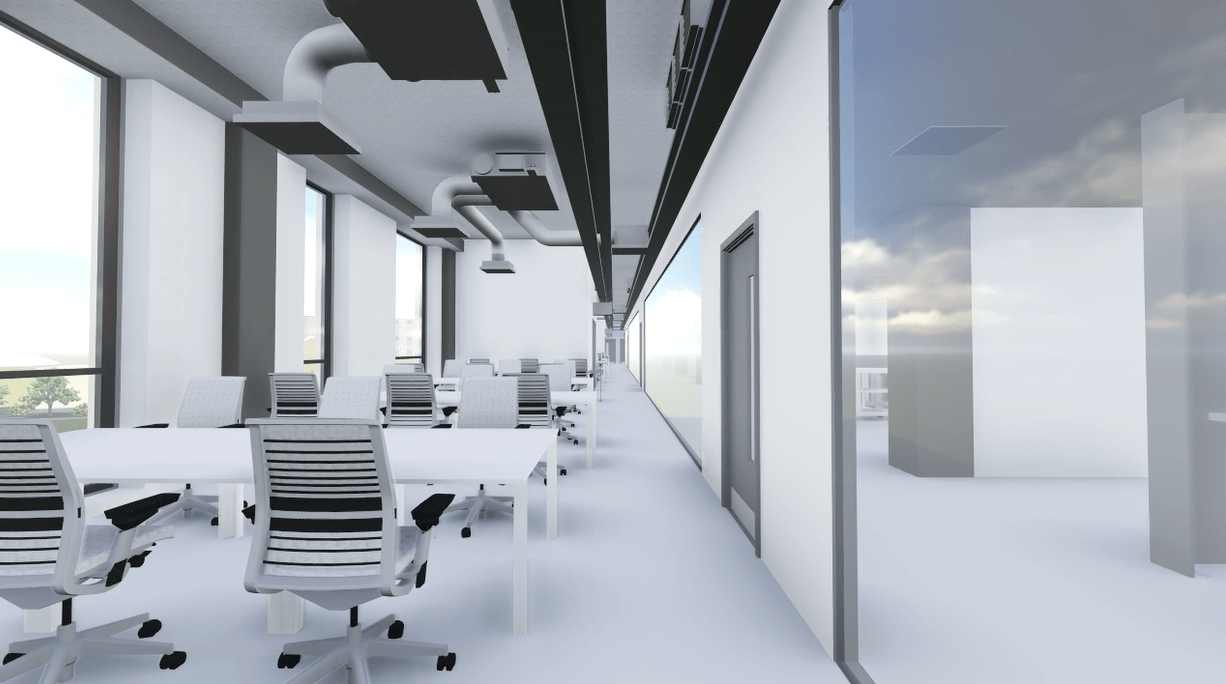 Above: An interior view of the new facility (image courtesy of FDG, Kier Construction and University of Cambridge).

Clearer graphical information – produced almost entirely in 3D – also helped with engaging end users and smoothing the sign-off process. Hinton explained: “It makes the end user very close to it, and once they start talking about where they’re sitting you’ve kind of got past some of those earlier design issues that you can come across.”

THE POWER OF 4D

As the construction phase approached, Kier began to develop a detailed four-dimensional model for the pre-cast concrete frame linking each individual element with its corresponding time duration on their project programme. The result was a powerful sequence that enabled them to see the planned construction method and monitor progress.

"With the 4D model everyone can understand what we’re doing this week, what we achieved last week and what we’re looking at for six weeks’ time”

“We look every week at each item of the frame that’s being installed and the guys really have a good perception of what’s going to happen” explained Taylor. Kier BIM Co-ordinator Ash Dawson concurred: “Traditionally you don’t have the ability to visualise a programme. With the 4D model everyone can understand what we’re doing this week, what we achieved last week and what we’re looking at for six weeks’ time.” 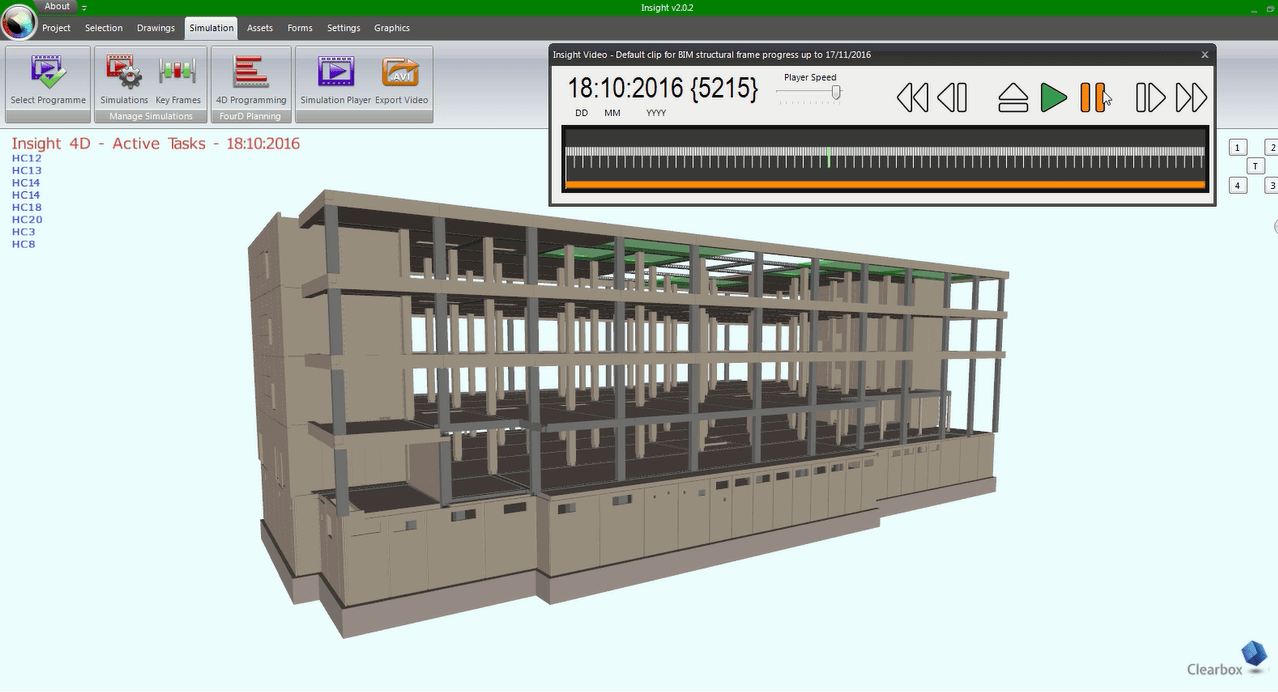 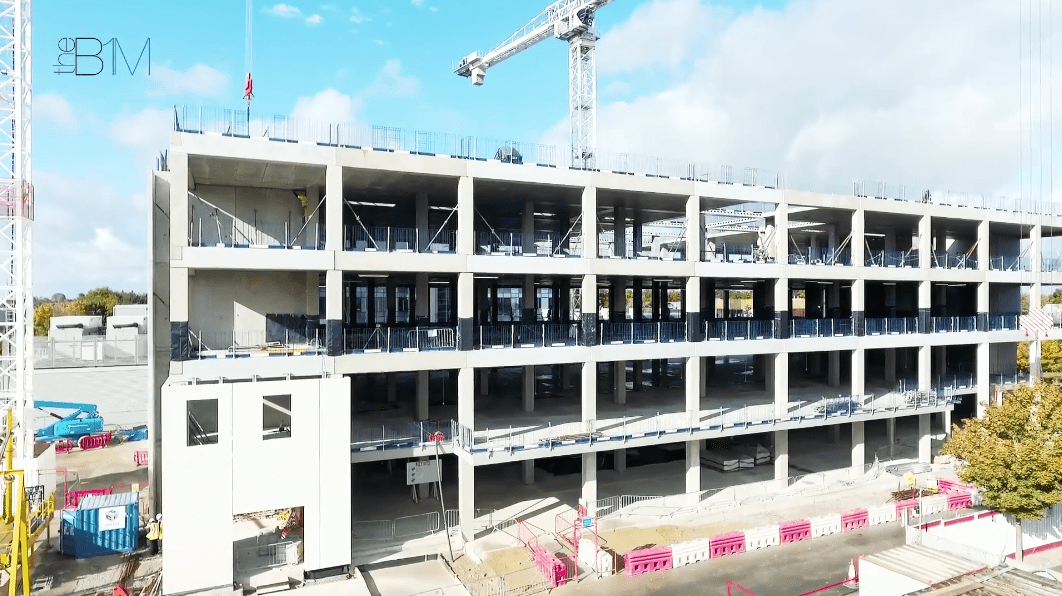 Above: Construction progress of the pre-cast concrete frame captured by The B1M's drone in October 2016.

The University of Cambridge estate consists of some 600,000 square meters across 350 operational buildings. Such a portfolio demands sound asset management and the University are actively looking toward the developments around BIM Level 3 and Digital Built Britain to enhance their approach. 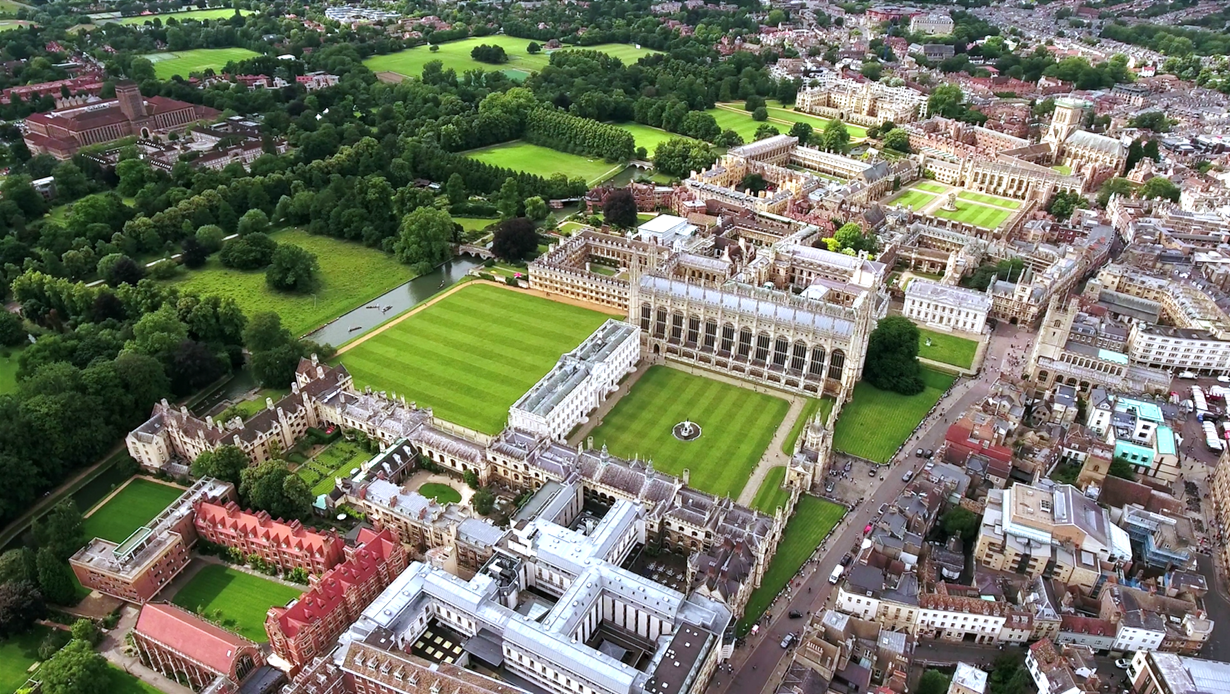 Above: The University of Cambridge estate covers some 600,000 square meters across 350 buildings.

“Most people take the COBie* outputs and put them into their CAFM system, we want to go a little bit further than that” said Hinton. “That’s quite a gap to bridge at the minute. So far BIM has focused on construction. The bit that comes afterwards is not so well put together or understood”.

(*COBie = ‘construction operations building information exchange’. In very simple terms this is a consistent format for presenting the data extracted from an information model).

SUCCESS IS A JOURNEY

We have documented a number of BIM case studies on The B1M, but few come close to the level of success and progress achieved by the Capella team.

The sense of collaboration and commitment to a common goal was overtly apparent from our first pre-production meeting. It was as if we were talking to one organisation rather than the six or so parties around the table, including Cambridge themselves.

“Capella has helped showcase what a successful project looks like. It has also helped us to sell internally [in Kier]; our senior management are starting to look up and see the benefits derived”

“It was really open and in my view was in the spirit of BIM itself” explains Hinton in the documentary. “It comes down to individuals” says Boutle “You get the right team of people working together and it can actually be quite fun.”

Boutle continued: “Capella has helped showcase to the rest of the business what a successful project looks like. It has also helped us to sell internally; our senior management are starting to look up and see the benefits derived.” 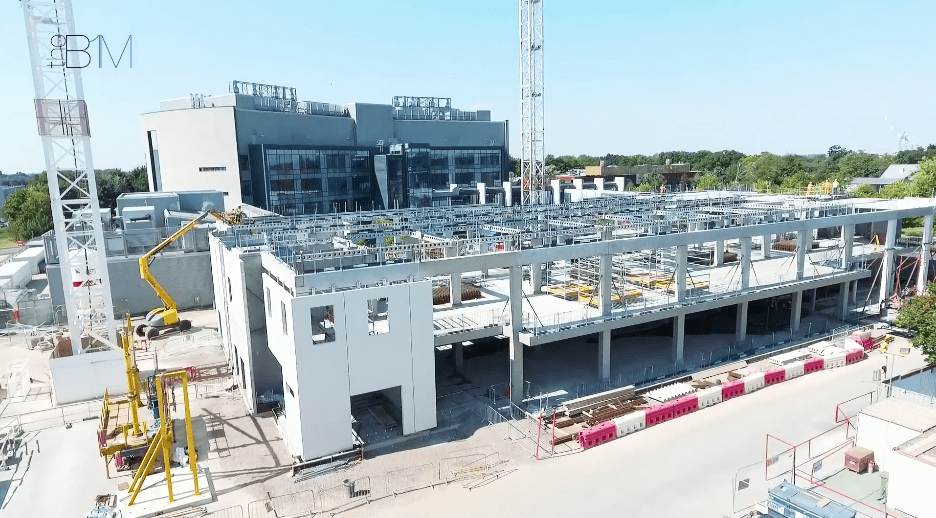 Above: The construction site in August 2016 and Below: An impression of the completed scheme (image courtesy of FDG, Kier Construction and University of Cambridge). 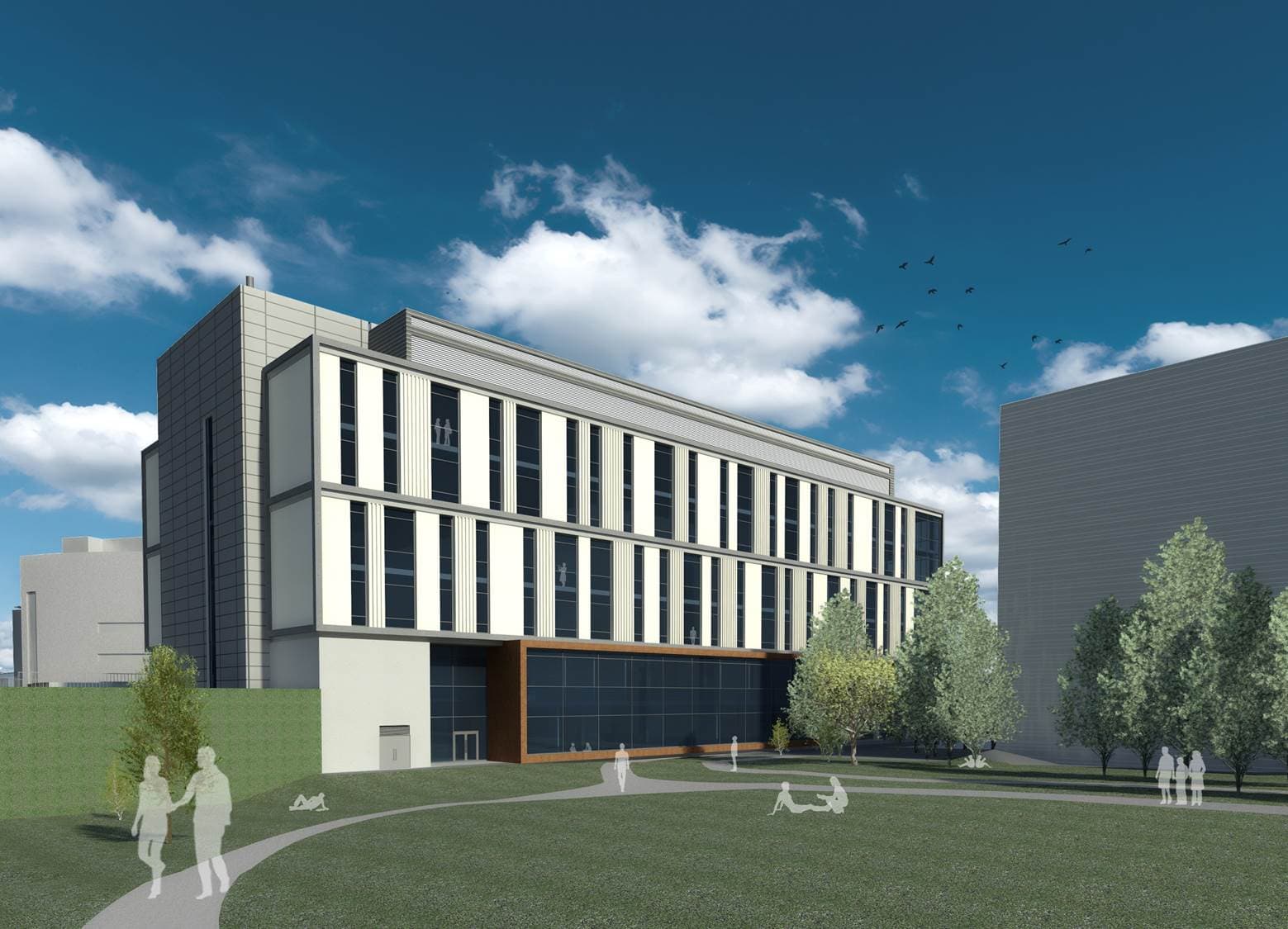 The project’s status as a BIM ‘trailblazer’ for the University is well-earned and the learning from Capella has been fed into a number of larger developments progressing across the Cambridge estate.

“If we’re going to talk about value that’s an incredible amount of value from this project” said Hinton. “It sets the route and foundations going forward for bigger things.”