HONG KONG was the original poster child for construction in Asia, back when megaprojects like the Birds Nest were a mere glint in Beijing’s eye. Generations of engineers and architects have cut their teeth here with landmark buildings like the HSBC and Bank of China towers.

And it’s not just high tech towers that earned Hong Kong its reputation for engineering excellence. The city also boasts the Mass Transit Railway, MTR for short, one of the best underground train networks in the world, and it just got even better. 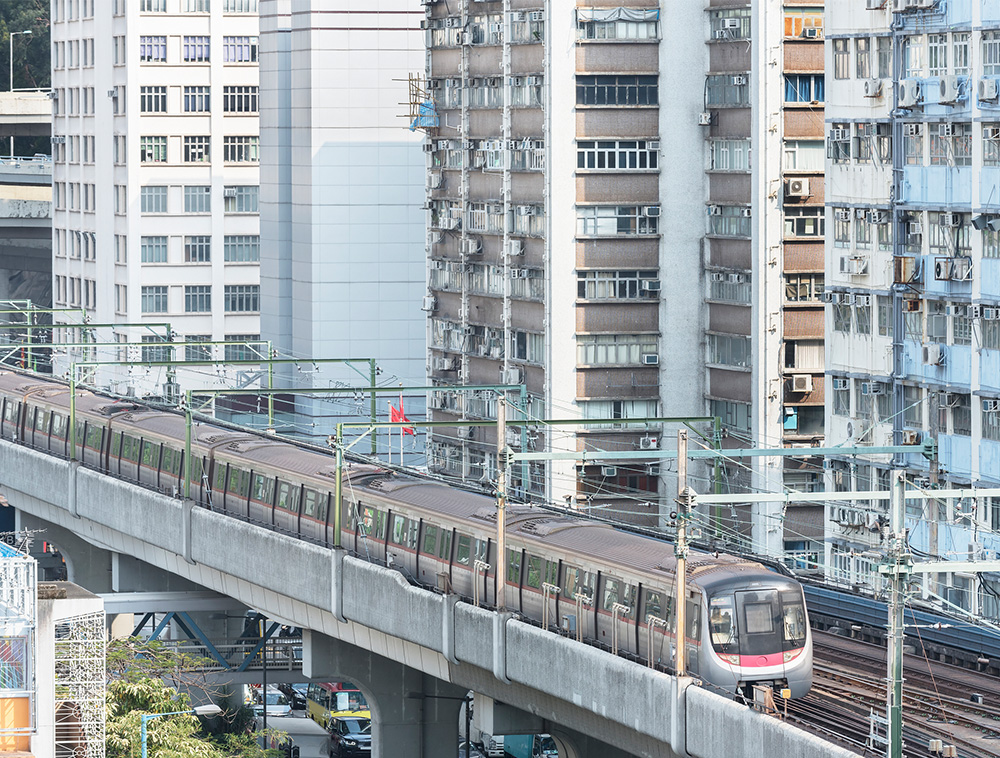 Above: The MTR is the backbone of Hong Kong’s public transport.

The newly opened multibillion dollar Sha Tin to Central link will transform transport in Hong Kong from its leafy outer reaches to its neon heart.

It’s fast, efficient and has the kind of fan following that would turn the London Underground green with envy, but it hasn’t exactly gone to plan. The construction has had to contend with extreme weather, and a deadly pandemic and that seems to have been the easy bit.

The building of the SCL gave rise to Hong Kong’s biggest construction scandals in living memory, an episode which has shaken Hong Kong’s construction industry to its reinforced concrete core.

Before we get to that though, and to understand just how important the SCL is, let’s start with a quick geography lesson.

The city of Hong Kong is made up of a wide range of territory. There’s its namesake, Hong Kong Island, which lies just south of Kowloon Peninsula and the New Territories, both of which are connected to mainland China, and all of this is surrounded by a couple of hundred sparsely populated islands. 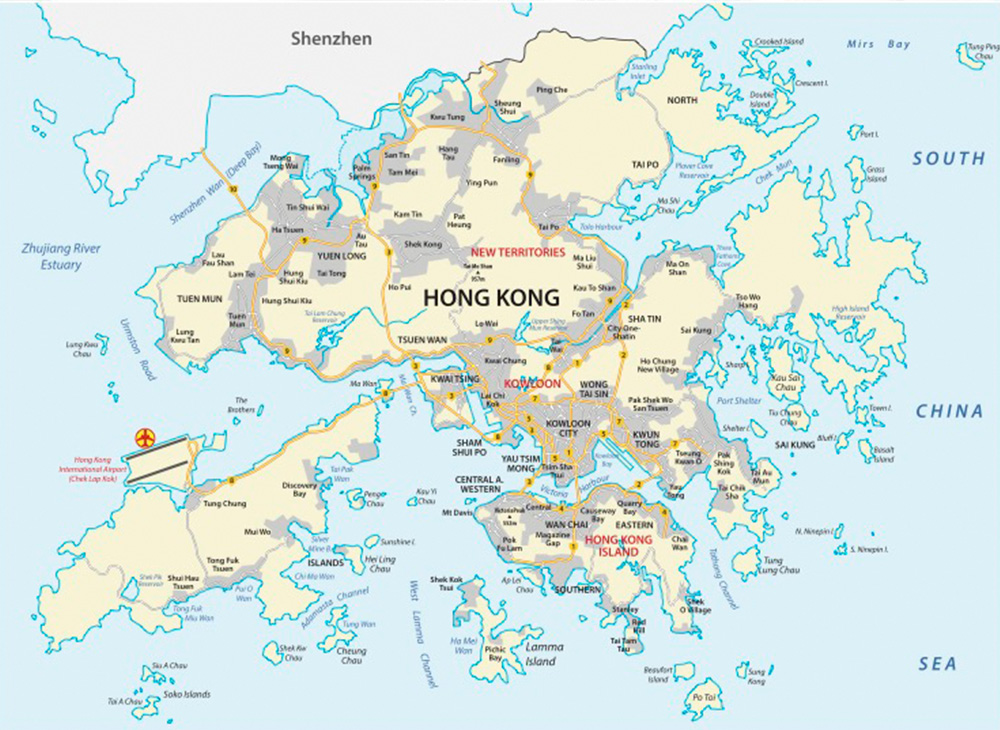 Above: Hong Kong’s geography is widely spread over a series of islands and a peninsula.

The majority of Hong Kong’s population live in Kowloon and the New Territories but the city’s major business hub is Hong Kong Island. Moving such a massive number of people around the city’s complex geography every day is something of a challenge, which has traditionally been met by the MTR, as Neil Ng, Project Manager at SCL Civil told us:

It’s this demand the SCL was designed to address. The plan was so huge it was split into two phases. Phase one would join two existing rail lines to create the new Tuen Ma line. This would provide a new east, west link across the New Territories on what would be the MTRs longest line.

But phase two would extend the East Rail line from Kowloon across Victoria Harbour and create a much needed fourth rail link to Hong Kong Island. 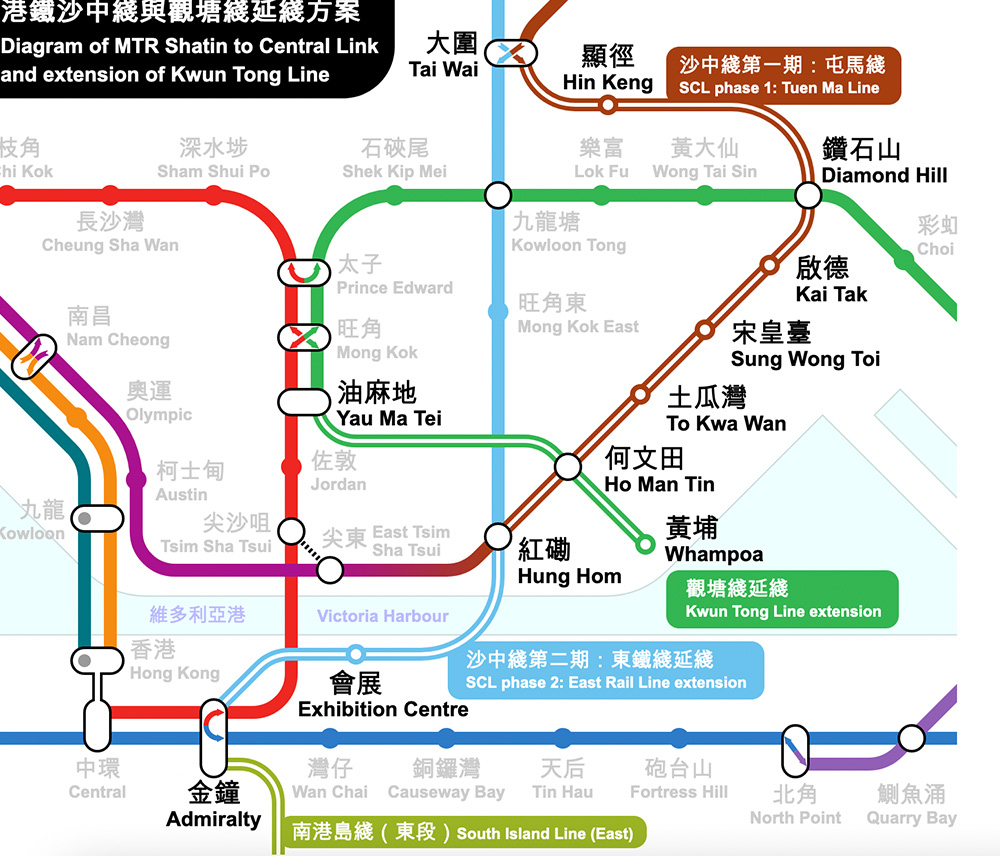 Above: The Sha Tin to Central Link was created in two phases. Image courtesy of Sameboat.

It was the crossharbour extension that saw some of the biggest engineering challenges of this whole project. As the railway had to connect to Hung Hom, an existing station on the north side of the crossing, a tunnel solution was needed that would be shallow enough to avoid trains diving sharply underneath the harbour like a rollercoaster.

Instead of drilling through the bedrock, the team opted for an immersed tube tunnel, a system whereby a trench is dug out of the seabed and pre-fabricated sections of tunnel are towed out at sea level. These tunnel sections are sunk, fitted together, and covered over with excavated earth. Once the whole thing is watertight, water is pumped out and hey presto, you’ve got an underwater railway.

The 11 tunnel sections were built at the former Shek O quarry on the south east tip of Hong Kong island . Around 160 metres long, nine metres tall and 20 metres wide, each of the units weighed an incredible 23,000 tonnes.

Once constructed the quarry was flooded and the tunnels were towed to the north side of the island. Meanwhile a specially constructed gravel spreader was preparing the seabed to ensure it was stable enough to take the enormous weight of the tunnel. 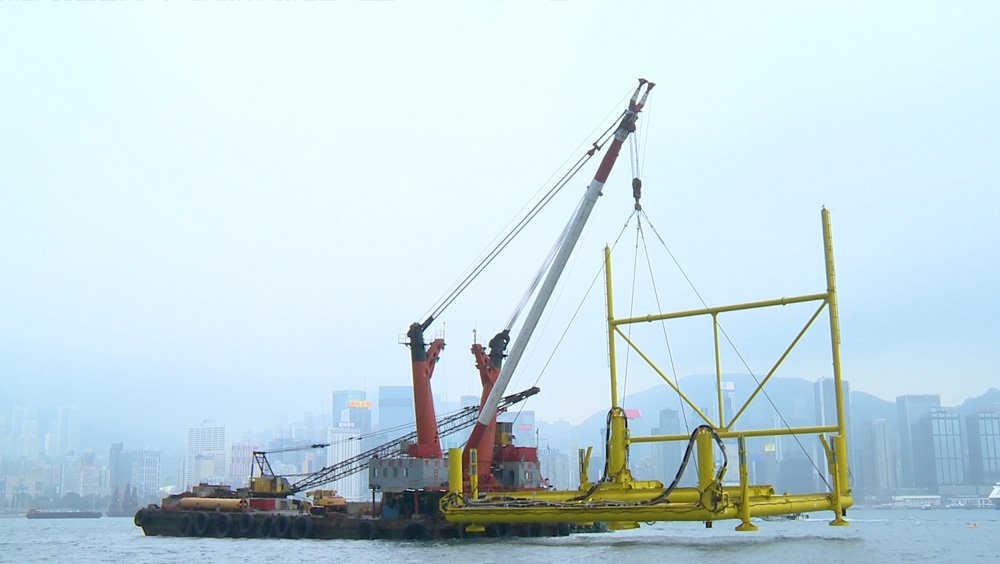 Above: A specially constructed gravel spreader was used to prepare the seabed. Image courtesy of MTR.

“This gravel spreader was able to use a computerised system so that it can not only place the gravel, but also have the gravel to the right thickness in the right level before the final units are put in place,” Ng said.

After the units were lowered into place a hydraulic jack was used to slide them together. A gasket was used to create a watertight seal and the remaining water was pumped out

From here it was over to Athena and Zhi-nu the project’s two tunnel boring machines to create the two kilometre long tunnel from the north side of Hong Kong island to the East Rail Line’s new terminal at Admiralty station – that is, of course, two kilometres through one of the most densely built areas on the planet.

After the tunnel managed to squeeze its way through Hong Kong’s crowded subterranean landscape it then somehow had to plug into a station so busy it had become meme worthy, without disrupting any services to the three other lines in active service.

“Admiralty Station originally had two lines: the Tsuen Wan line and Island line," Ng said. "We then commissioned the South Island Line in 2016. Part of that work under the South Island Line project had created the space required for the Sha Tin to Central link platforms, which we've built over the last few years. That work involved underpinning the existing Island Line tunnel over a length of approximately 60 metres."

In total 650,000 tonnes of rock was removed and replaced with 5,000 tonnes of steel beams and supports. And the result is the new Admiralty mega station, connecting the extended East Rail Line with three other MTR lines. 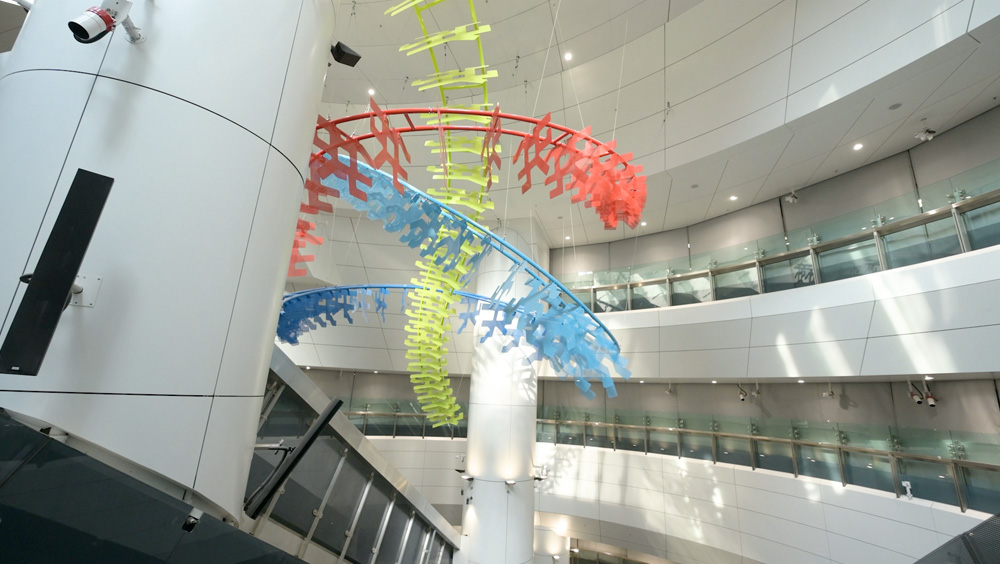 So, another triumph for Hong Kong then. Cue adoring crowds and congratulations all round. Well, not quite. In 2018 during the construction of Hung Hom station a whistleblower scandal erupted which cast a shadow over the whole project.

Everything started when Jason Poon, a subcontractor working on the site, went public with what he saw as a number of dangerous safety standards being breached.

The accusation centred around work on the station platform. Poon alleged that construction workers were not properly installing the steel bars, or rebar, which connected the structure of the platform to the station wall. Instead of screwing the rebar into couplers which join two sections together, workers were cutting the rebar short so it only appeared they were connected. 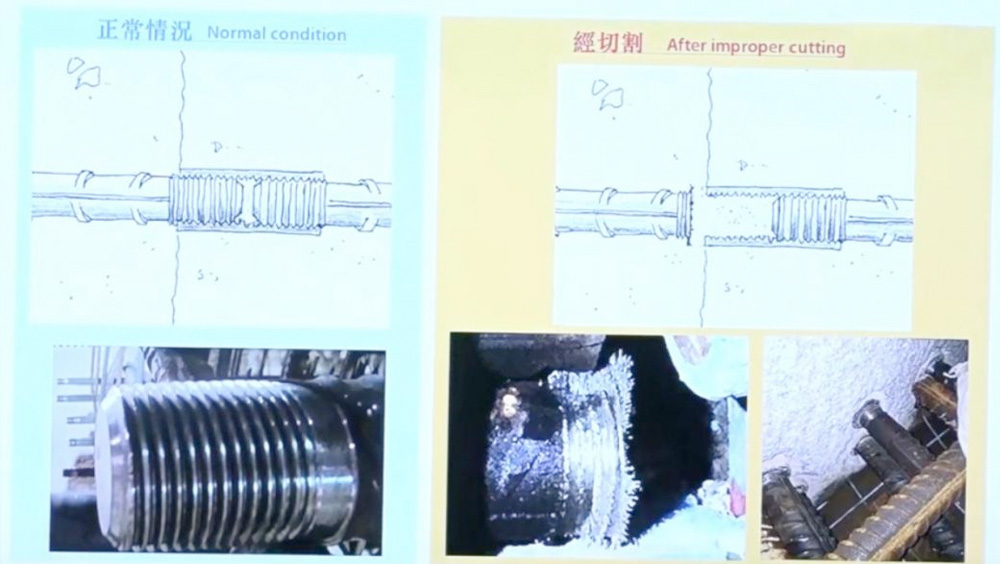 Above: Evidence presented to the inquiry on how rebar was cut short. Image courtesy of MTR.

Once the structure was filled with concrete to create the platform, this could have created an unstable structure which could potentially collapse, with devastating consequences.

In July of that year as news of the allegations spread, the Hong Kong government launched an inquiry led by retired judge Michael Hartmann and what they found was pretty bad. An inspection in April 2019 revealed that out of 191 steel bars which were excavated for inspection, 39 were too short.

And it didn’t stop there. As the investigation widened they discovered paperwork was missing for the northern tunnel approach and there were further examples of unauthorised work, such as changes to the design of the rebar structure at Hung Hom station.

The inquiry concluded that some rebar was cut dangerously short at Hung Hom station. The report also stated that this proved “worrying,” as it undermined the credibility of the construction records. The report found that while MTR was not responsible for ordering the rebar to be installed in this way, they were responsible for it as it was their duty to supervise and sign off all work. 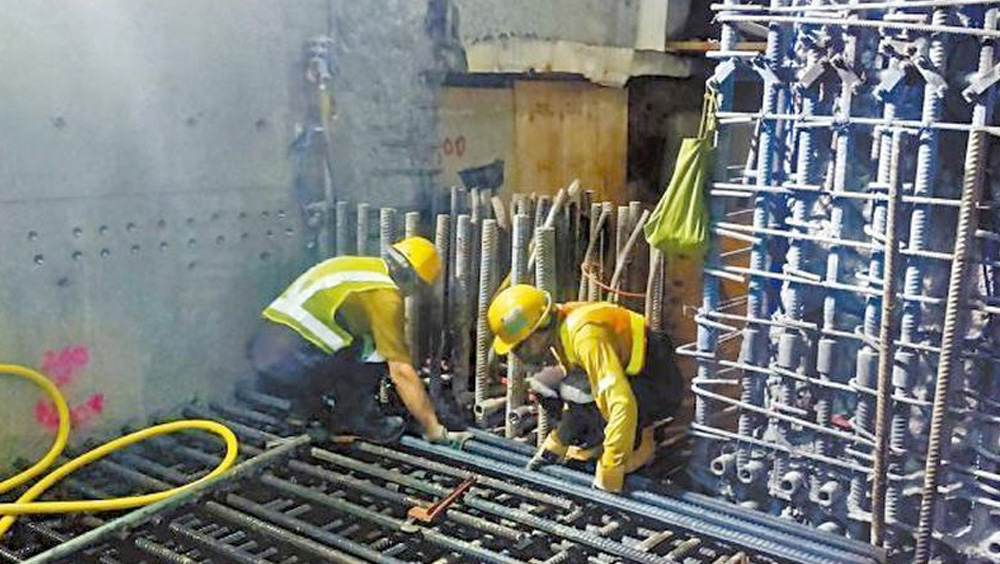 Above: Workers at Hung Hom station. Image courtesy of MTR.

The Inquiry concluded that while no direct orders were given by MTR to cut corners, it was ultimately responsible for signing off all work as was the Hong Kong government.

Frank Chan, the Hong Kong Secretary for Transport and Housing and Jacob Kam, CEO of MTR Corporation both publicly apologised for the scandal with Chan promising an internal review to prevent a scandal like this happening again.

“During the inquiry MTR did a lot of reviews," Ng said.

After these remedial works were carried out Hartmann declared it “fit for purpose” and safe to open.

“We respect all the findings and recommendations of the inquiry and we have taken those on board as well to go forward before our next set of projects.”

As shocking as this scandal was, it doesn’t seem to have damaged public enthusiasm for the new rail line. The steady growth of the MTR has nurtured a new wave of train enthusiasts in Hong Kong’s youth. 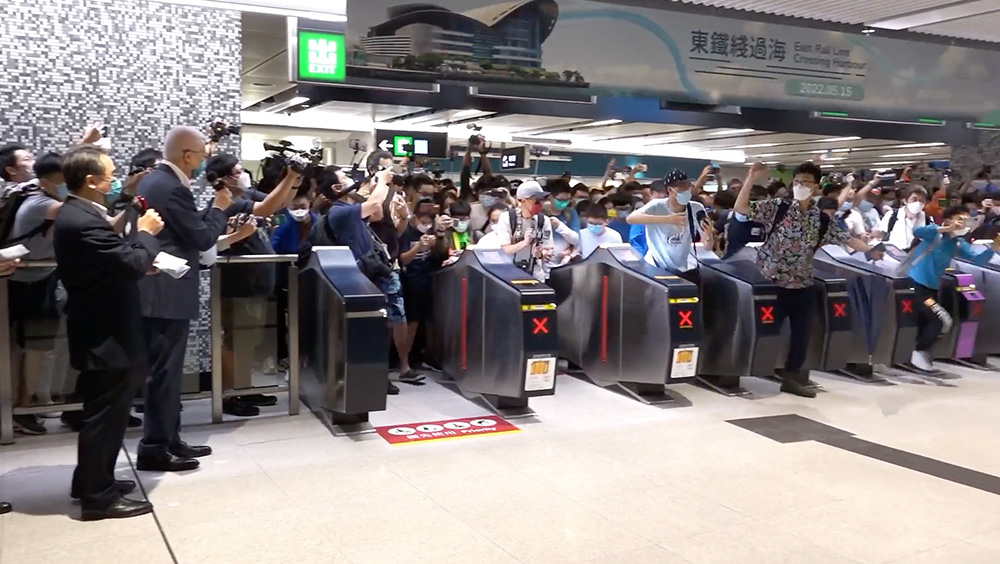 Above: Thousands queued for the opening of the new East Rail Line. Image courtesy of MTR

As the expanding rail network provides connectivity to towns in further flung corners of the city, its grateful new passengers are all too happy to celebrate this.

When the East Rail line extension opened for service on 15 May 2022, thousands of eager fans turned up to try and get a place on the first train at 5:30 am. Aaron Kei, from the blog Train Not Arriving, told us more:

“I arrived at the station at around 04:00 am and there were so many people queuing to enter the Exhibition Centre station. Some of the earliest began queuing at 08:00 pm on the 14th of May, one day before the opening.”

It may be two years late and nearly one and USD $1.5bn over budget but it looks like the Sha Tin to Central link has the seal of approval and its die hard fans have set a new bar for the openings of infrastructure megaprojects.