BROADWAY. The name of this New York street instantly conjures up the glitz and glamour of the most famous theatre district in the world. But nowhere embodies the history of The Great White Way more than the iconic Palace Theatre. It’s hosted greats like Harry Houdini, Liza Minelli and… Spongebob Squarepants.

After over a century of entertaining audiences in Times Square, it’s getting a well deserved facelift. Millions are being spent restoring the interior, remodelling the elaborate plaster work, creating new light fittings and what else? Oh yes, it’s being raised nine metres up in the air.

Yes, you read that correctly. More than just the curtain is being raised in this plan to build the biggest and most cutting edge entertainment venue in Times Square. So if you’re wondering how and why an historic theatre is being lifted nearly 10 metres into the air, grab some popcorn and read on. This is no dress rehearsal.

Our story starts in Times Square in 1913 where impresario Martin Beck wanted a grand theatre to show off the greatest acts of the day. As theatre historian Jeffrey Eric Jenkins tells us, it was built to impress: 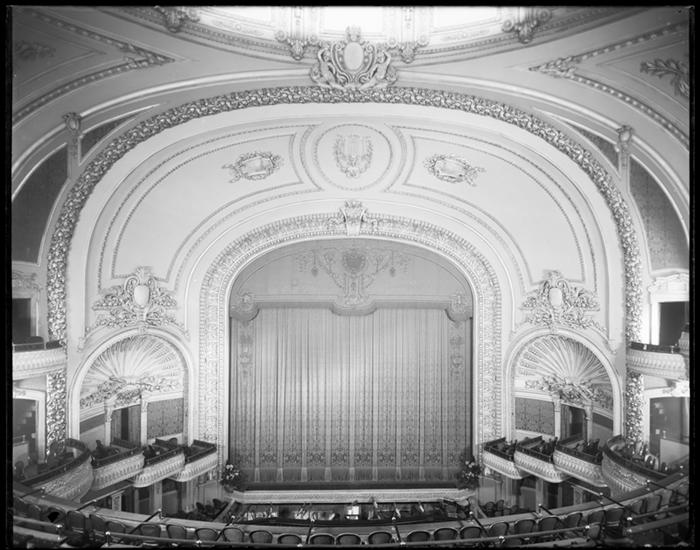 Above: The interior of the Palace Theatre as it appeared in 1913. Image courtesy of L&L Holding.

The combination of big name acts and a luxurious interior were an instant hit and the Palace became one of the most successful theatres in the district, loved by performers and audiences alike. One legendary performer in particular did quite well from the Palace’s success …

“Sarah Bernhardt made USD $7,000 a week," Jenkins said. "That's more money, by a factor of four, than the President of the United States made at that time.”

But the good times were not to last. By the 1980s Times Square was seeing major redevelopment and when plans were announced to build a new hotel on the site of the Palace, it looked like it was curtains for the theatre.

But it’s not over till the fat lady sings and at the last minute the Palace was given City Landmark Status – the same designation given to buildings like The Empire State Building and the Guggenheim Museum – which prevents demolition and sets strict rules on any alterations.

Undeterred, in 1987 the plans for the hotel went ahead anyway but instead of knocking the Palace theatre down, the hotel was just built around it. 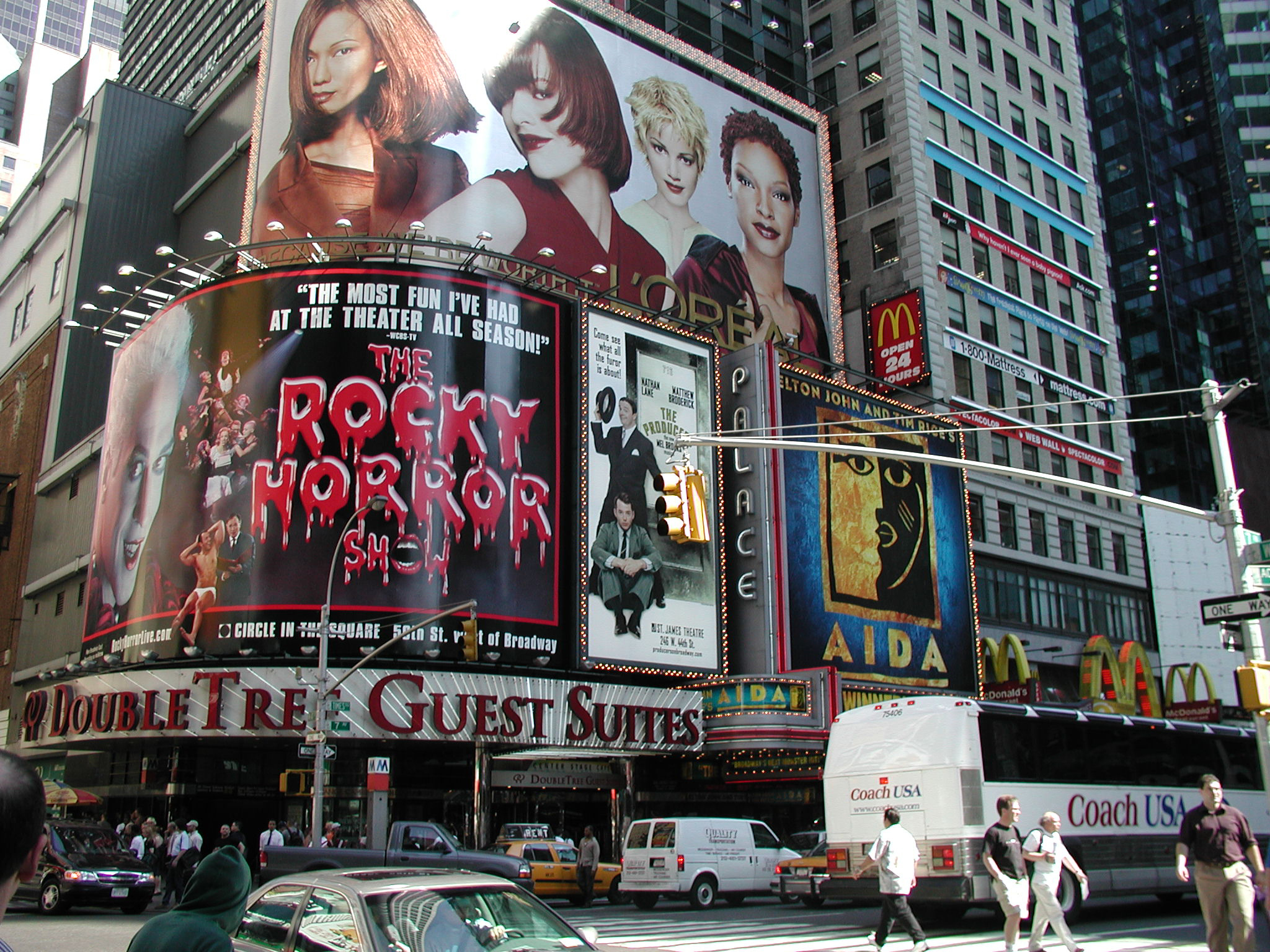 Above: The Palace Theatre was incorporated into the building of the Double Tree Hotel in 1987.

Fast forward 30 years and this time it’s the hotel which has outstayed its welcome. The 1980s structure is being demolished to make way for TSX Broadway, New York’s most advanced entertainment venue.

The 170 metre tower clearly wants to make a statement. But to steal the limelight in the middle of Times Square, you need to do something pretty special.

That something is a showstopping outdoor platform for musicians and live events hovering nine metres above 7th Avenue. And in case that doesn’t catch your eye, you’ll get to see performers on Times Square’s largest and most advanced display screen.

Above: TSX Broadway as it will appear after completion. Image courtesy of L&L Holding.

“We designed two large doors so that when they are closed, it will appear as a regular LED sign. But when the doors are opened they will open inwards and create a 30 by 30 foot stage.”

Connected to this will be two floors of what’s promised to be the latest in experiential retail – a big improvement on what was there before: “a cash exchange and a small gift shop” says Israel.

To make the most of this incredible location, this gallery space will sit at ground floor on one of the busiest street corners in America … exactly where the registered City Landmark Palace Theatre has sat for over a hundred years.

Let’s rewind a bit. The landmark designation which saved the Palace in the 1980s only applied to the inside of the theatre. Everything but the stage and the auditorium was knocked down when the building was absorbed into the hotel. This gave the TSX Broadway developers an idea.

“When we bought the property The Palace Theatre existed at the ground level," Israel said. "In order to create the retail footprint, we needed to move the theatre out of the way. Landmark status means we cannot either demolish or remove the theatre. With that in mind, we said, ‘okay, what if we lifted the theatre box in order to open up and activate the ground floor?’” 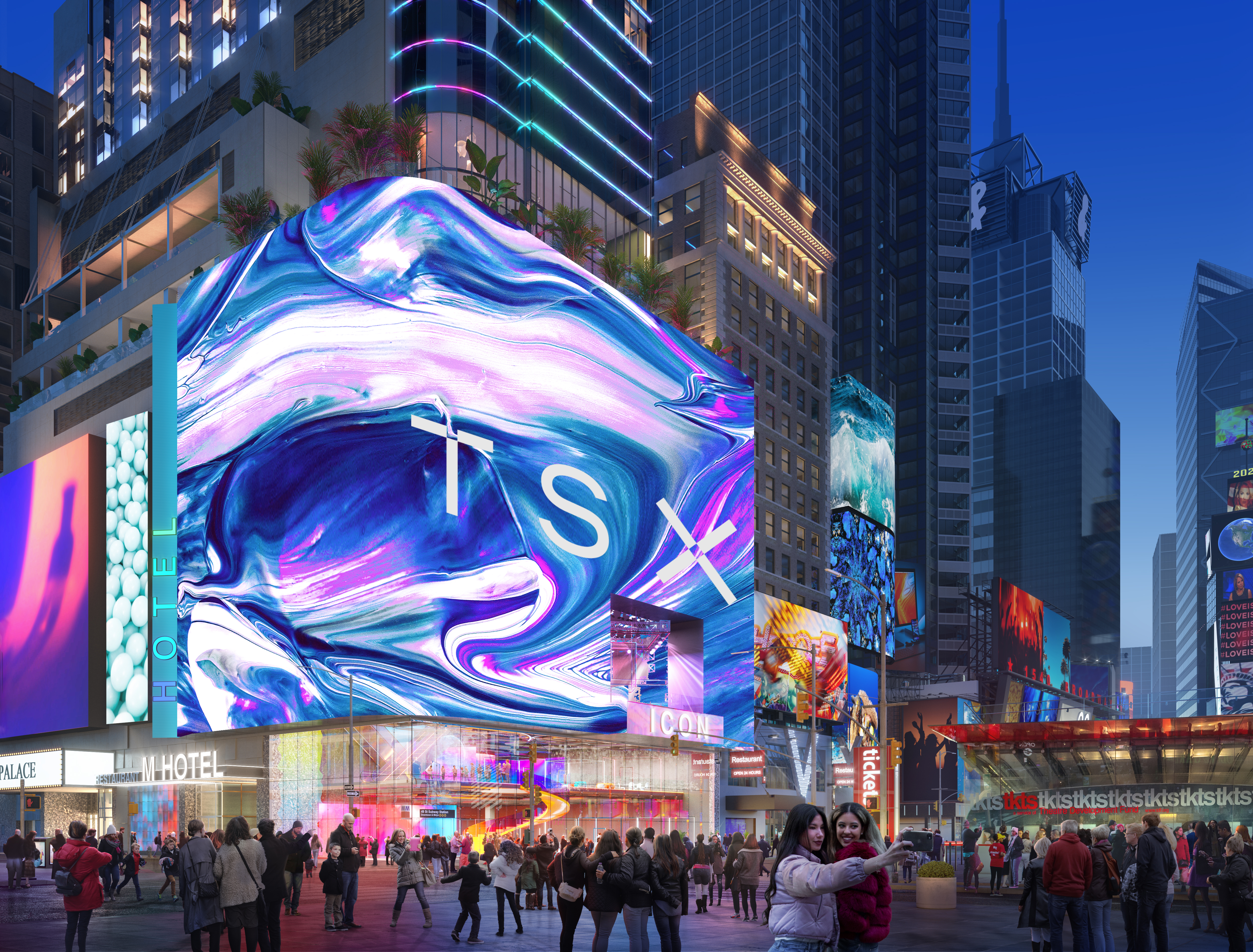 Right so that’s the why, now what about the how? First the existing tower was partly demolished and a structure was put in place to support the remaining floors. The basement was then made ready for the lift and the steelwork above the theatre was cleared to give it room to move into.

“One of the most challenging parts of the construction was clearing the basement of the theatre to allow the installation of the 34 specially designed lifting posts while not undermining the 48 storey building that remained overhead,” said construction superintendent Chris Speckenbach.

“You go in, take the overburden out, chop out a little bit of the rock, but you can't go too deep because you can't undermine the existing foundations and then put a drill rig in there”

The first phase began in January when the theatre was lifted just over seven centimetres to test the equipment.

Tilt metres ensured the theatre stayed level during the lift and an array of monitors were in place to spot any damage to the theatre as it rose up through the structure. 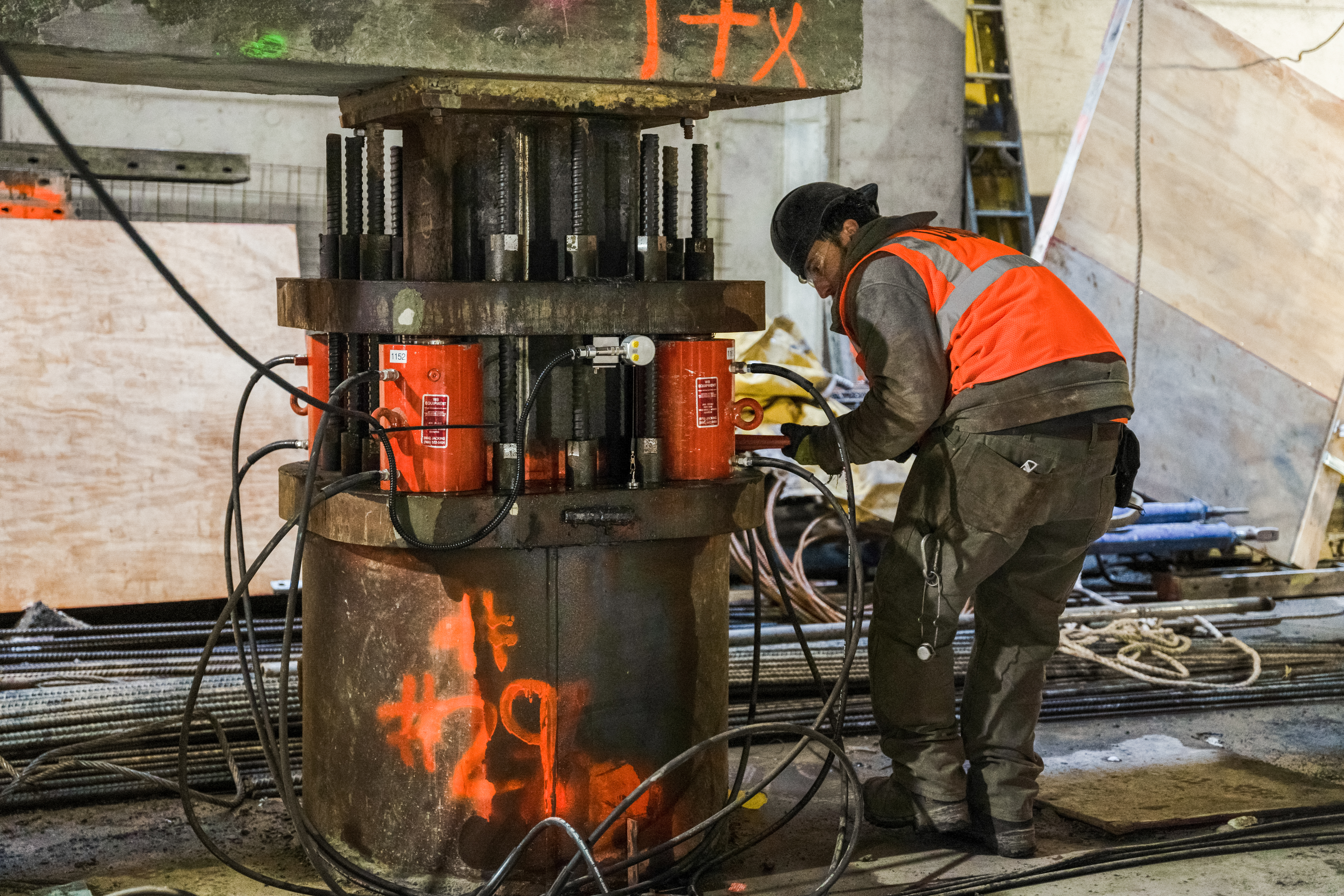 Above: A construction worker prepares one of the 36 specially designed lifting posts. Image courtesy of L&L Holding.

“The main thing that the lift had was extensometers, which were little devices that were wired to each jack and which went back to a computer," Speckenbach said. "So if you're pushing up on the theatre, it could monitor that we weren't getting one area going faster than another. So if it got over a certain tolerance it would just shut down.”

As well as the heavy duty equipment, a small army of specialists worked on the lift. Three different teams of structural engineers were employed to focus on the foundations, the lifting apparatus and the theatre itself. Another team of engineers monitored the stability and shoring of the operation.

Once the team was happy with how the equipment performed the main phase began on 14 February 2022. 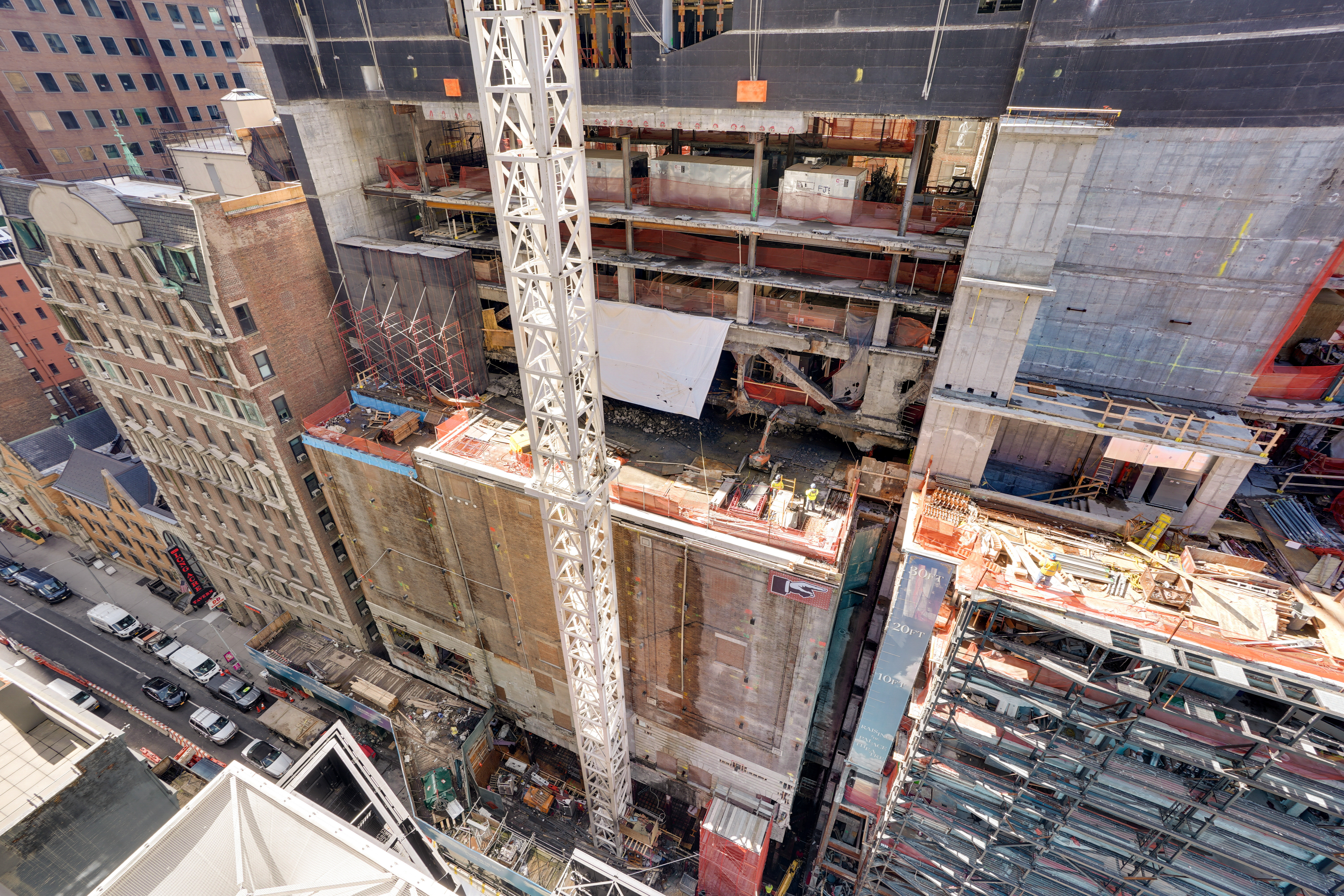 Above: The main phase of the lift began on 14 February 2022. Image courtesy of L&L Holding.

The hydraulic jacks lifted the theatre box in 12 centimetre “strokes” after each of these movements a team of consultants performed a thorough inspection of the structure, before any work continued.

After seven painstaking weeks the lift was finally completed on April 5th. This was a moment of huge pride and relief for Israel and his team.

“To see the theatre rise was very difficult, that made everybody sort of nervous," Israel said. "But ultimately, as the theatre raised, it was just an awesome, awe inspiring moment for myself, the team and the consultants.”

Now the theatre has been hoisted into position it’s getting a facelift from a team of specialist restoration workers. On opening night, theatregoers will enter through a brand new lobby and be treated to an auditorium restored to its former glory. But it’s not just the public areas that are getting a makeover. 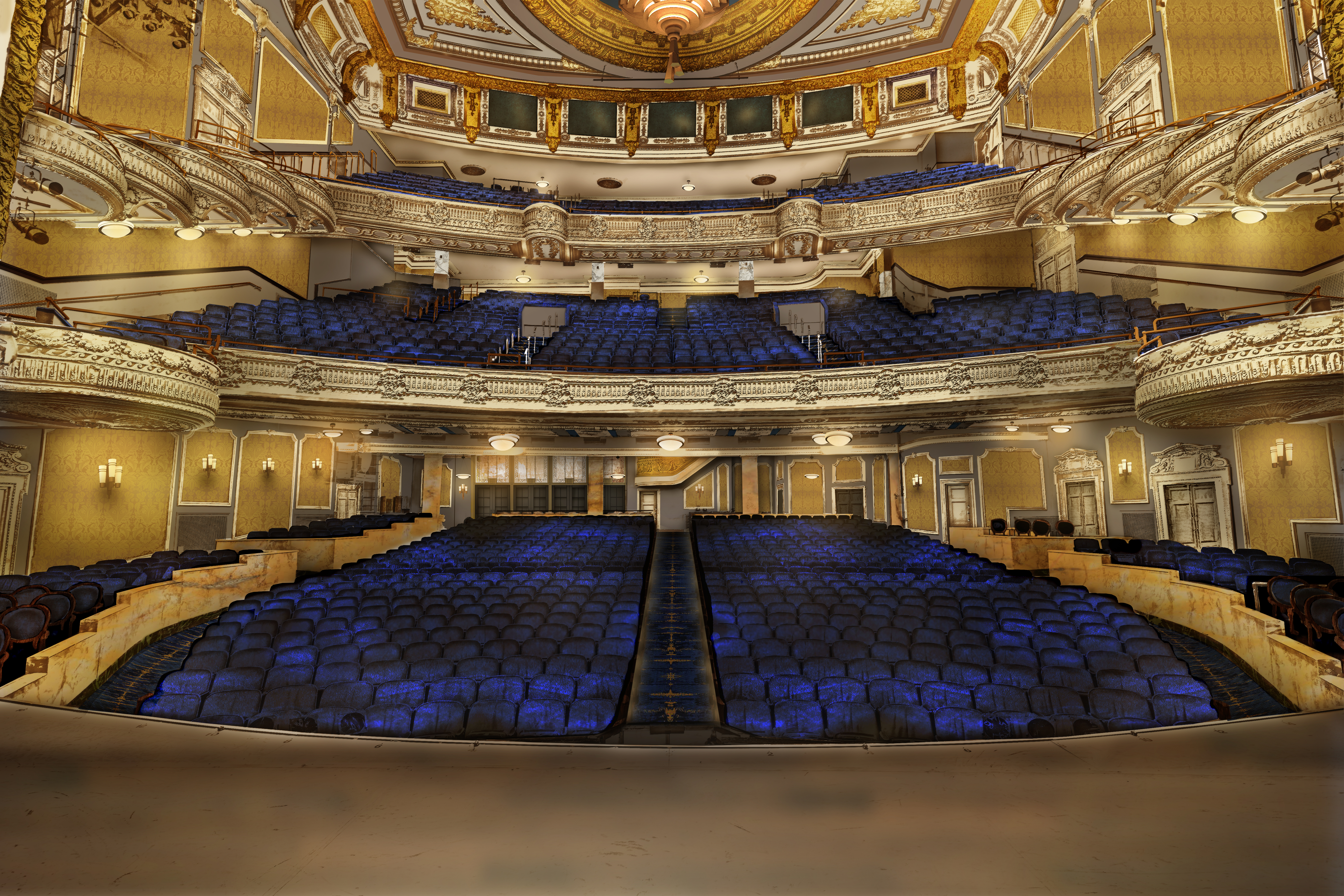 Above: An artist's impression of how the theatre will look after the renovation. Image courtesy of L&L Holding.

“All of those back of house support areas which usually play second fiddle to the performance areas are now going to be state of the art. Everybody's going to want to play The Palace. They wanted to play it before, but now it's going to be even more enticing,” Israel said.

The theatre may have started life as a palace but now it’s part of something even bigger. So will this do justice to the venue that’s hosted everyone from Judy Garland to Frank Sinatra and will lifting the theatre be enough to bring the house down?

“It's going to be interesting. Obviously, the new marquee design is not an old style palace, but, you know, I think that's going to be okay. I'm really kind of excited to see how it all plays out,” Jenkins said.

Before the theatre reopens for the next generation of stars, there’s another group who need to take a bow for raising the roof.

“Well, it's been said many times: no one has ever done this before," Israel said. "No one has actually elevated a New York City Broadway theatre of 1,700 seats, 30 feet in the air … so it's a testament to my team, the consulting team and the construction team that we were able to do this and do it safely.”

The show must go on, and for the Palace Theatre it will do so thanks to the skill of the modern construction industry, so here’s a standing ovation to all those involved.

Now, when’s the next performance of Spongebob…?