NEW YORK CITY is synonymous with the skyscraper.

Since the late 19th Century, each economic cycle and architectural trend has driven a different era of high-rise development, resulting in the iconic skyline we know today.

Now, as demand for luxury residential property in Manhattan is far out-stripping the availability of land, "super-skinny" towers with a width-to-height ratio greater than 1:7 are ushering in a new age.

Rising from a narrow site, between an existing 40 storey office tower and New York’s Museum of Modern Art (MoMA), 53 West 53rd Street has been more than a decade in the making. 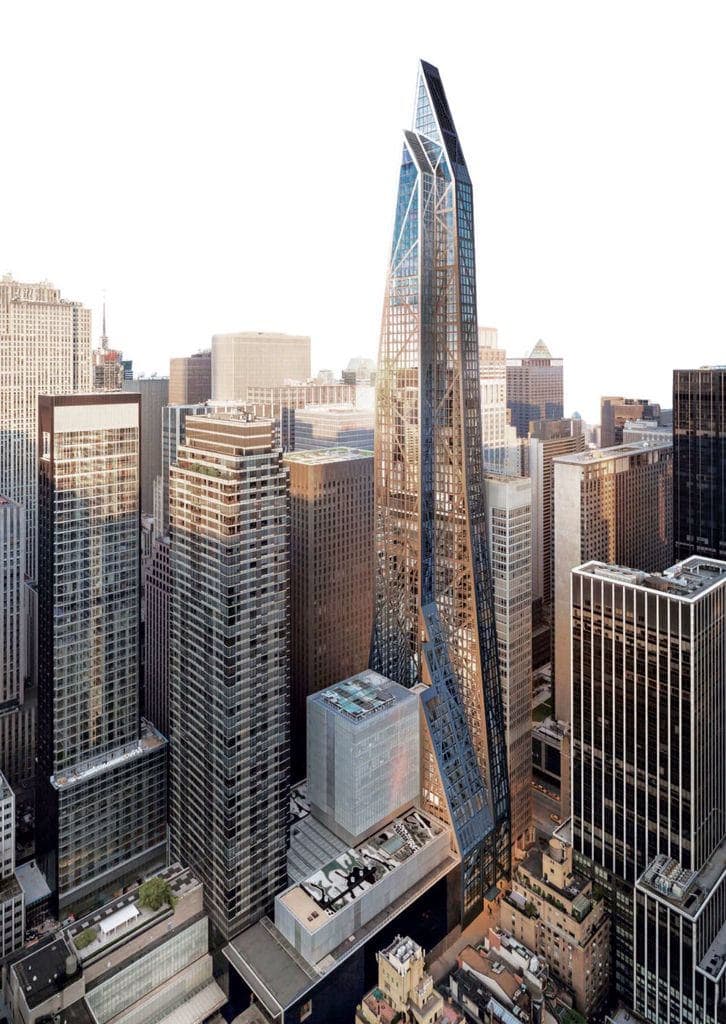 Above: 53W53 takes it's name from it's address at 53 West 53rd Street in Midtown (image courtesy of Atelier Jean Nouvel).

In 2006, New York City’s Museum of Modern Art began exploring ways to develop a small site they owned adjacent to their main buildings in midtown.

Their idea was make the land available for development, funding an expansion of the museum onto part of the site.

With demand for high-end residential properties in Manhattan exceeding the availability of land, a super-skinny high-rise tower was conceived, maximising floor area and value from the development.

Named after its 53 West 53rd Street address, the tower is officially known as “53W53” and is located just a stone's throw away from the city’s emerging “Billionaires Row” and Central Park.

Originally proposed to stand 381 metres (1,250 feet) tall – the same height as the Empire State Building – the original designs for the tower were rejected by city planners who considered it to be an over-development of such a small site and who raised concerns regarding the large shadow it would cast over Central Park. 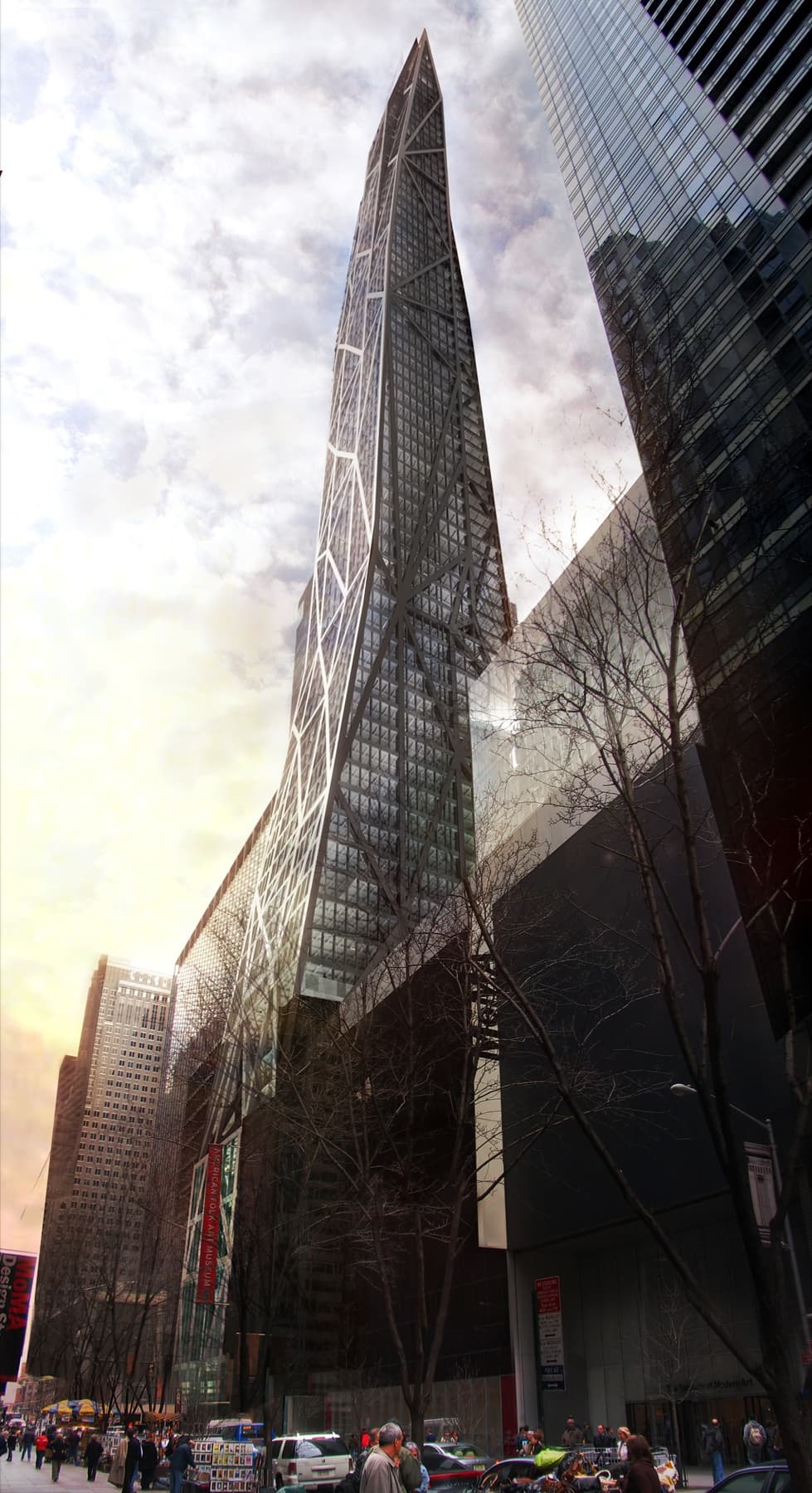 Above: Under original proposals, the tower would have stood as tall as the Empire State Building (image courtesy of Atelier Jean Nouvel).

Taking these concerns on board, the project team re-submitted plans for a shorter 320 metre (1050 foot) tower.

The New York City Planning Commission approved the development in 2009, on the condition that enough surrounding air rights were purchased to offset the extreme height of the new tower and to ensure that neighbouring sites could not be developed to the same extent in the future.

The result for the development, would be a skyscraper that could offer its residents breath-taking views of the city, without the risk of them becoming obstructed by neighbouring buildings.

Above: By acquiring surrounding air rights from neighbouring sites, 53W53 will offer incredible views that cannot be obstructed ( image courtesy of Hayes Davidson).

Shortly after this breakthrough, the project was put on hold as the world wrestled with the worst financial crisis since the Great Depression and as developer confidence receded.

Despite this setback, the project’s developers – Hines and Goldman Sachs – used the downtime to begin purchasing air rights from many of the tower’s adjoining sites – including the University Club of New York, St Thomas’ Church and the sites former owner; the Museum of Modern Art.

With an eventual resurgence in the property market some years later, developers formed a joint venture with the Pontiac Land Group to resurrect the project.

With the last air rights secured and the city planner’s pre-conditions satisfied, construction of the tower commenced in 2014.

Situated within three separate zoning districts, each with its own height and setback regulations, the tower’s architect Jean Nouvel had to take several factors into account when conceiving 53 West 53rd’s design. 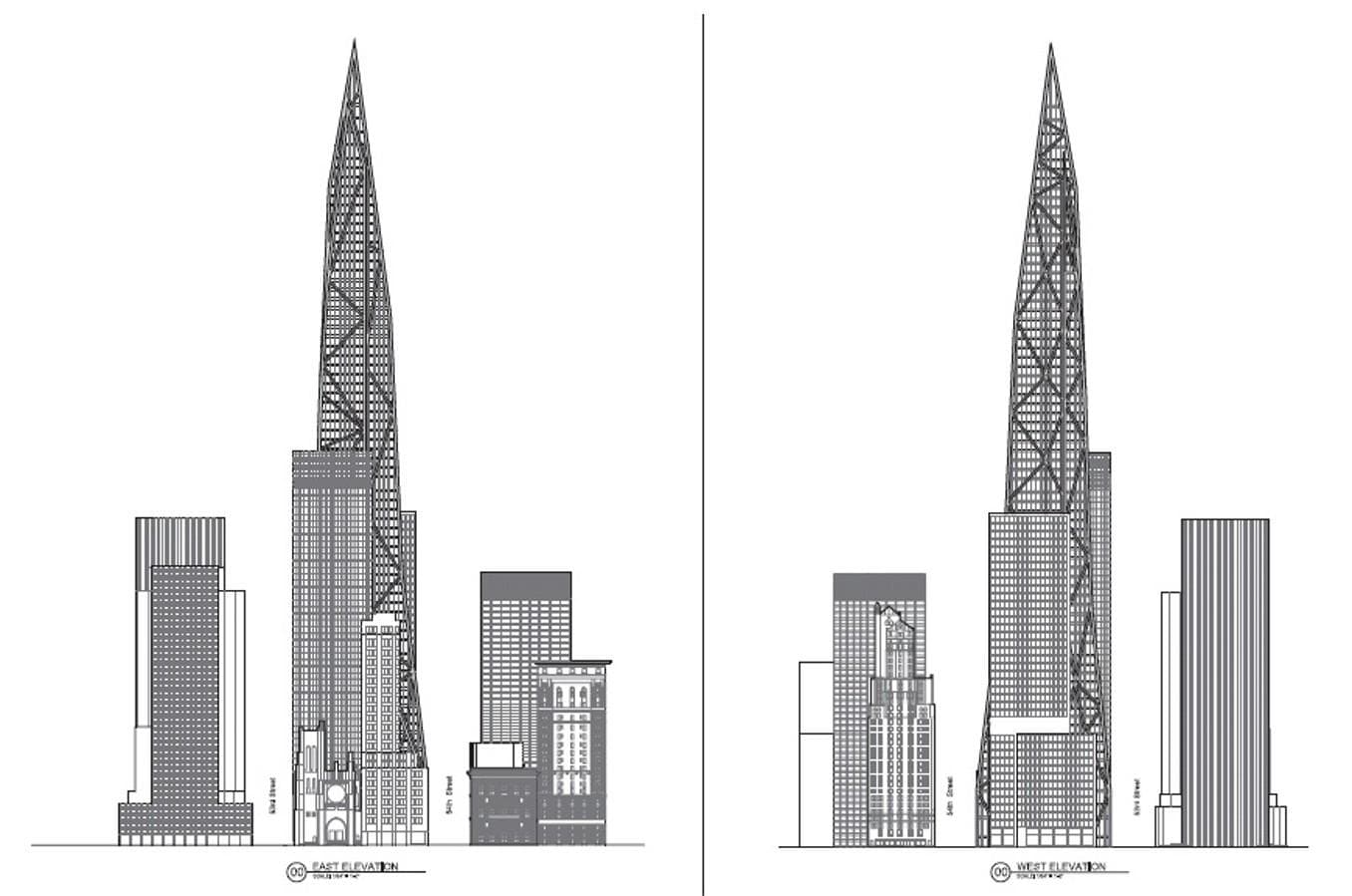 Above: The unique form of 53W53 was driven by the need to satisfy regulations in three separate zoning districts (image courtesy of Atelier Jean Nouvel).

The result is an impressive and uniquely formed structure that interprets its context, tapers in at different angles as it rises, and that does not feel overbearing from street level.

The tower offers 149 residences across its 77 floors, ranging from one to four bedroom apartments and a 617-square meter two level penthouse at its summit.

THE ART OF ENGINEERING

With an extreme width-to-height ratio of 1:12, the tower’s structural engineering is considerably complex.

From foundations that extend deep into Manhattan Island’s underlying bedrock, the tower rises around a high strength reinforced concrete core with an impressive diagrid structure supporting its perimeter façade.

This eliminates the need for internal columns within the high-end residences, improving flexibility of the layouts whilst creating sweeping views. 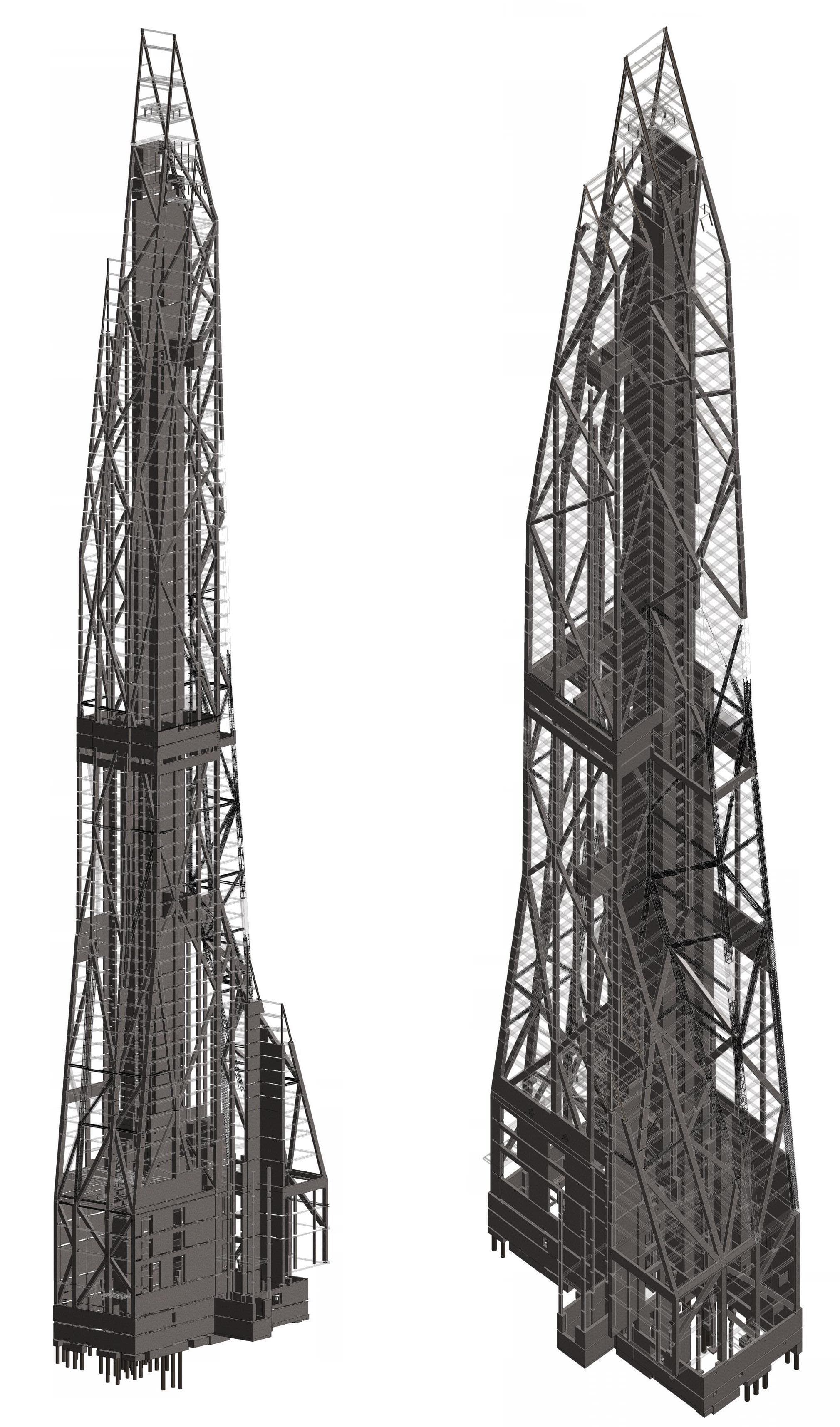 Above: The structural design of 53W53 eliminates the need for internal columns (image courtesy of Sesstressteel Engineering Services)

Whilst the tower’s diagrid perimeter was originally planned in steel, the floor-to-floor heights this offered were limiting. Instead, the project team developed the structural elements in reinforced concrete.

Some of the connections between these structural members are extremely complex, with as many as eight different elements converging into a single node in some instances. 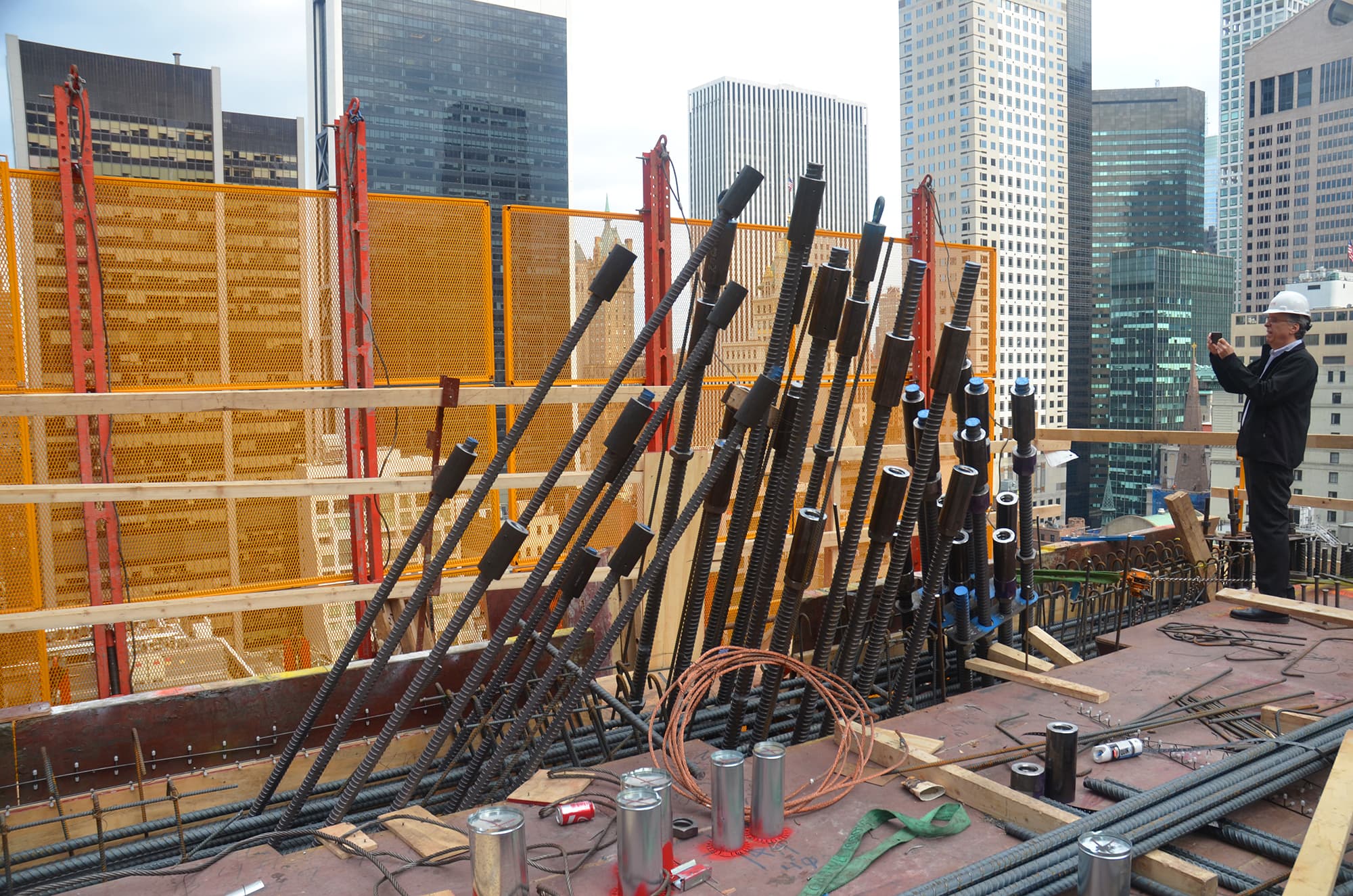 Above: The extremely complex steel reinforcement coming together on one of 53W53 (i mage courtesy of Evan Bindelglass). Below: The tower's reinforced concrete structure under construction (image courtesy of Giles Ashford). 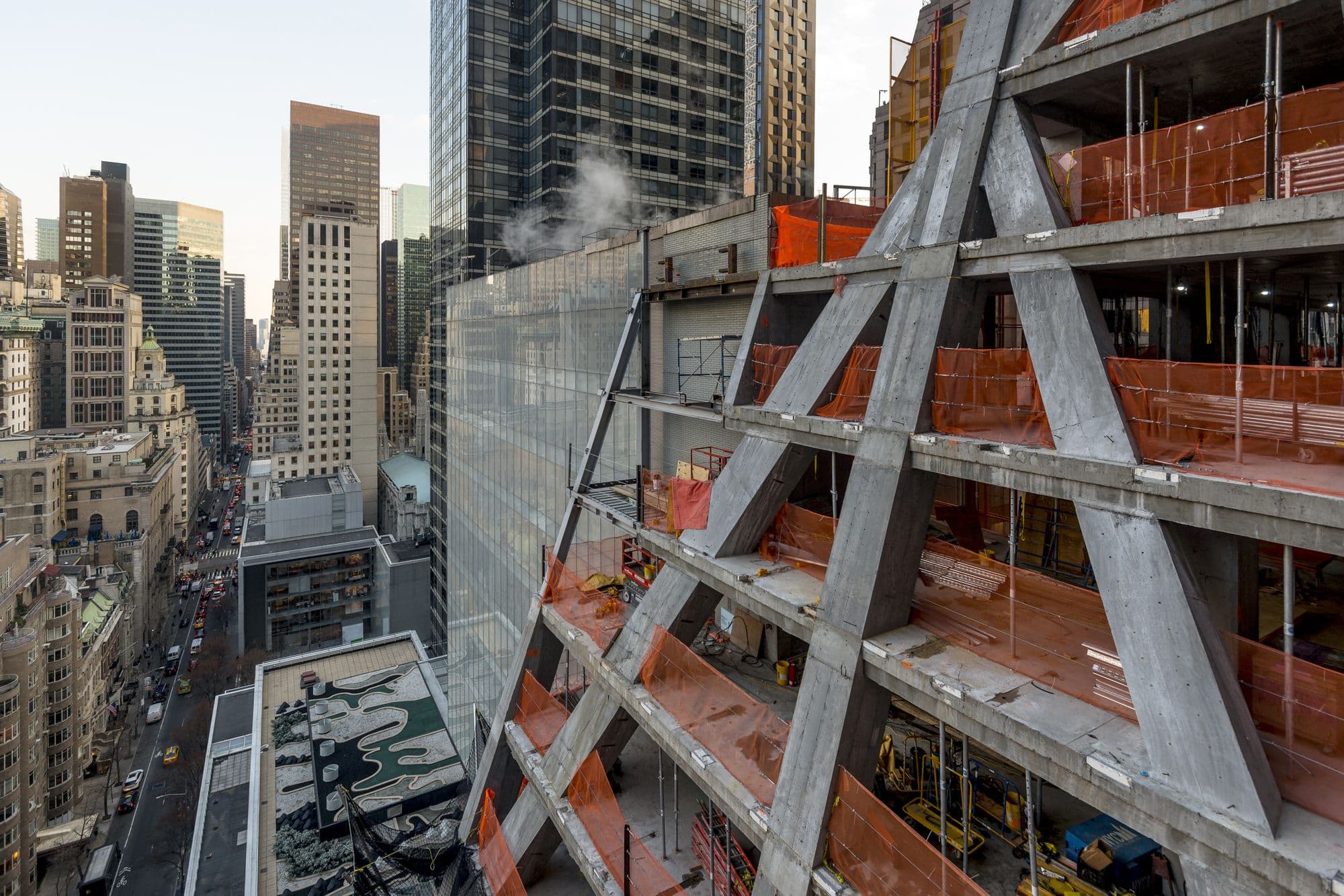 The steel reinforcement for such junctions and was so complicated that the project team constructed full scale mock-ups before construction commenced – this ensured that the designs that had developed would work and that concrete could cover and settle around the reinforcement sufficiently.

53W53 is topped by a breath-taking 40 metre (131 foot) steel and glass spire that offers a modern interpretation of New York’s famous tapering summits whilst obscuring a feature that is key to the tower’s structural integrity; a 650-tonne tuned mass damper between the 74th and 76th floors. 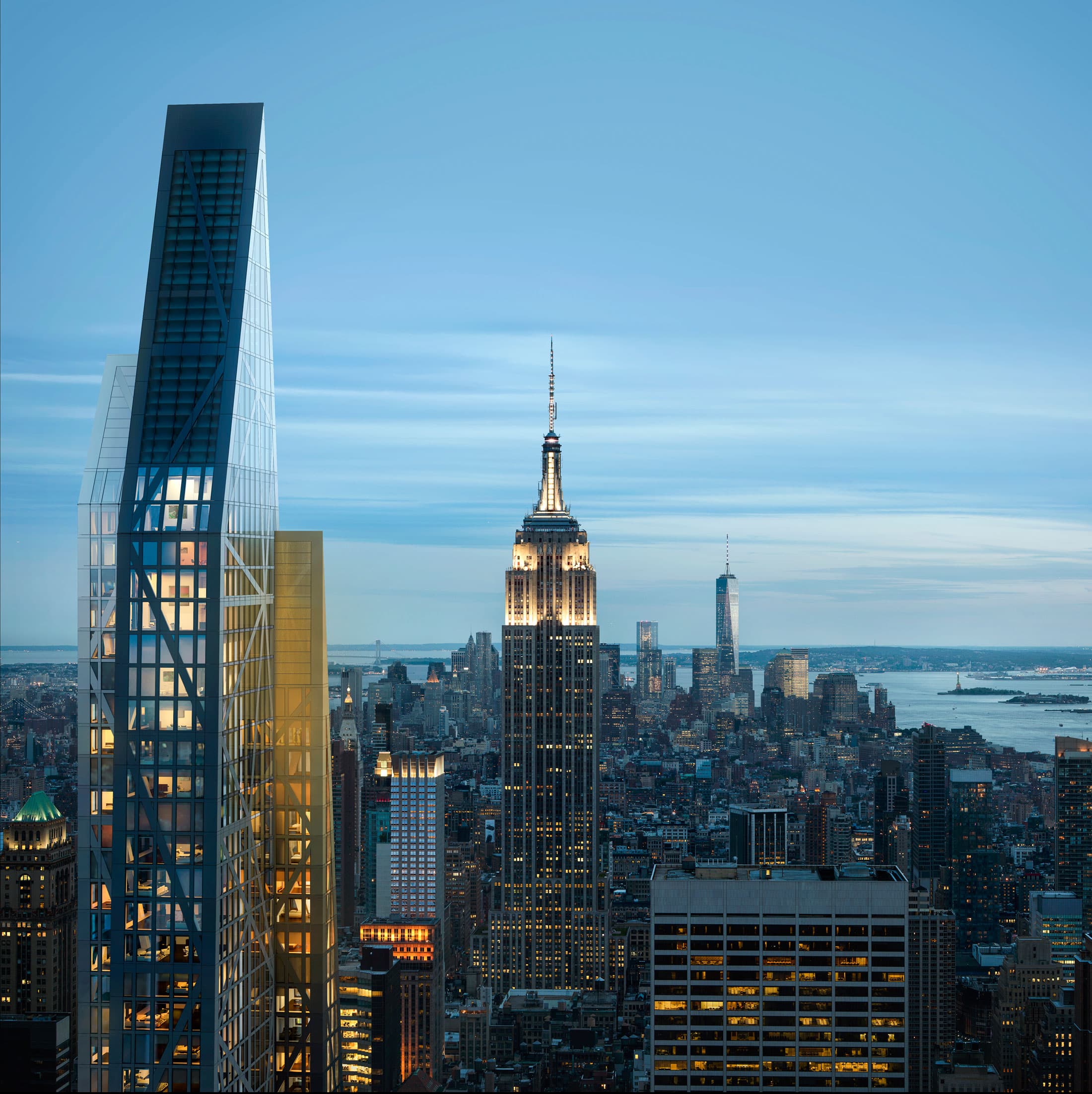 Above: The spire on 53W53 is not only a nod to New York City's earlier tapered spires, but hides the tuned mass damper that is crucial to the stability of the structure (image courtesy of Hayes Davidson).

With prices starting from USD $3M for a one bedroom apartment, the tower’s two-level penthouse can be yours for USD $70M.

Above: The Penthouse in 53W53 (image courtesy of Hines).

Designed with solid American oak flooring, top of the range appliances and marble counter tops – to name just a few features – residents also have access to a range of amenities including a library, state of the art theatre, pool and a private wine lounge. 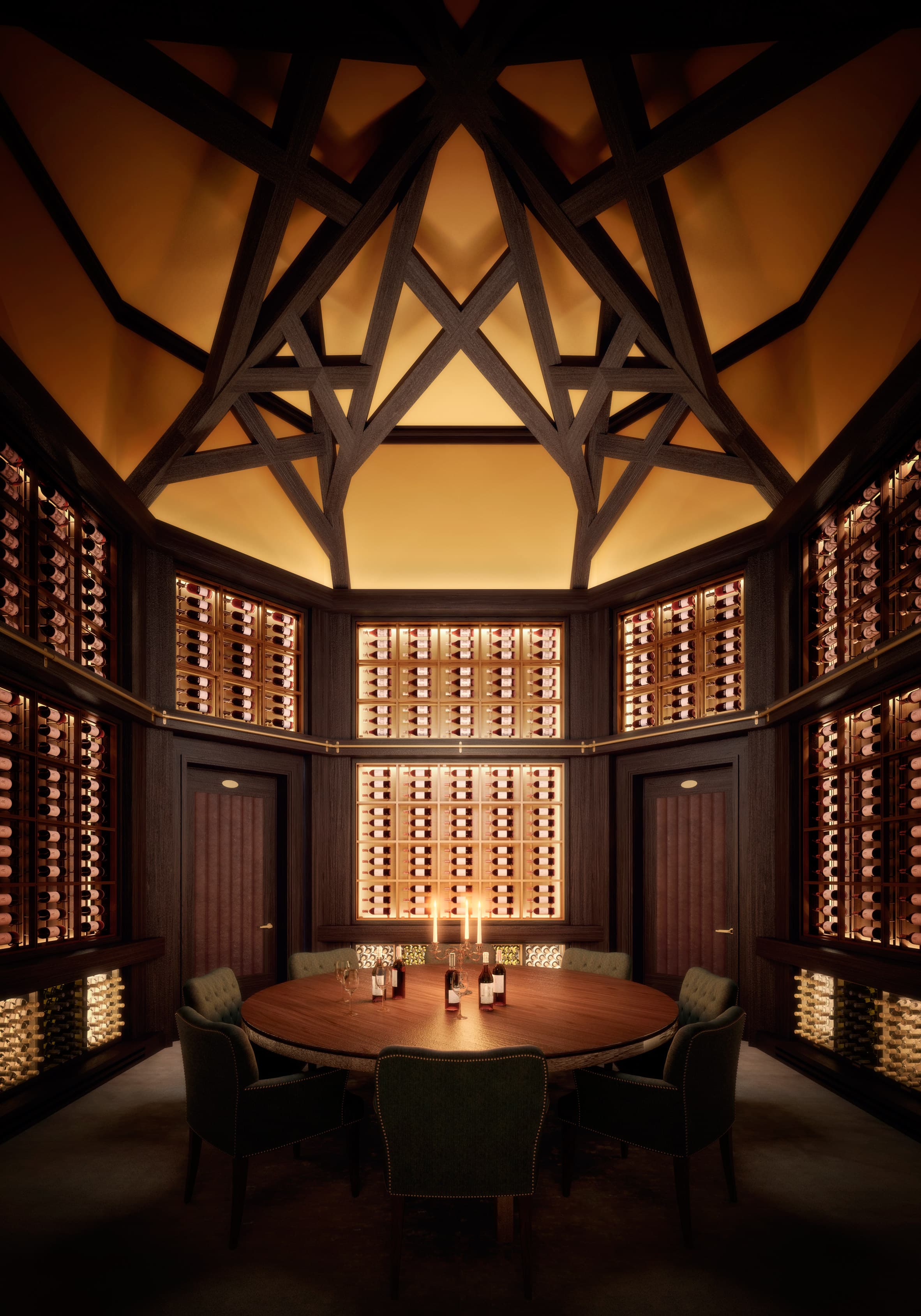 Above: The private wine lounge for residents of 53W53 (image courtesy of Hayes Davidson).

Residents will also gain benefactor membership with the neighbouring Museum of Modern Art as part of its 39,000-square foot expansion into the lower three levels of the tower.

Though not officially on “Billionaires Row” – which is broadly located to the north of 57th Street – 53 West 53rd is recognised as one of New York’s most exclusive new residential addresses, thanks to its incredible design, proximity to Central Park and the views it offers of the city skyline. 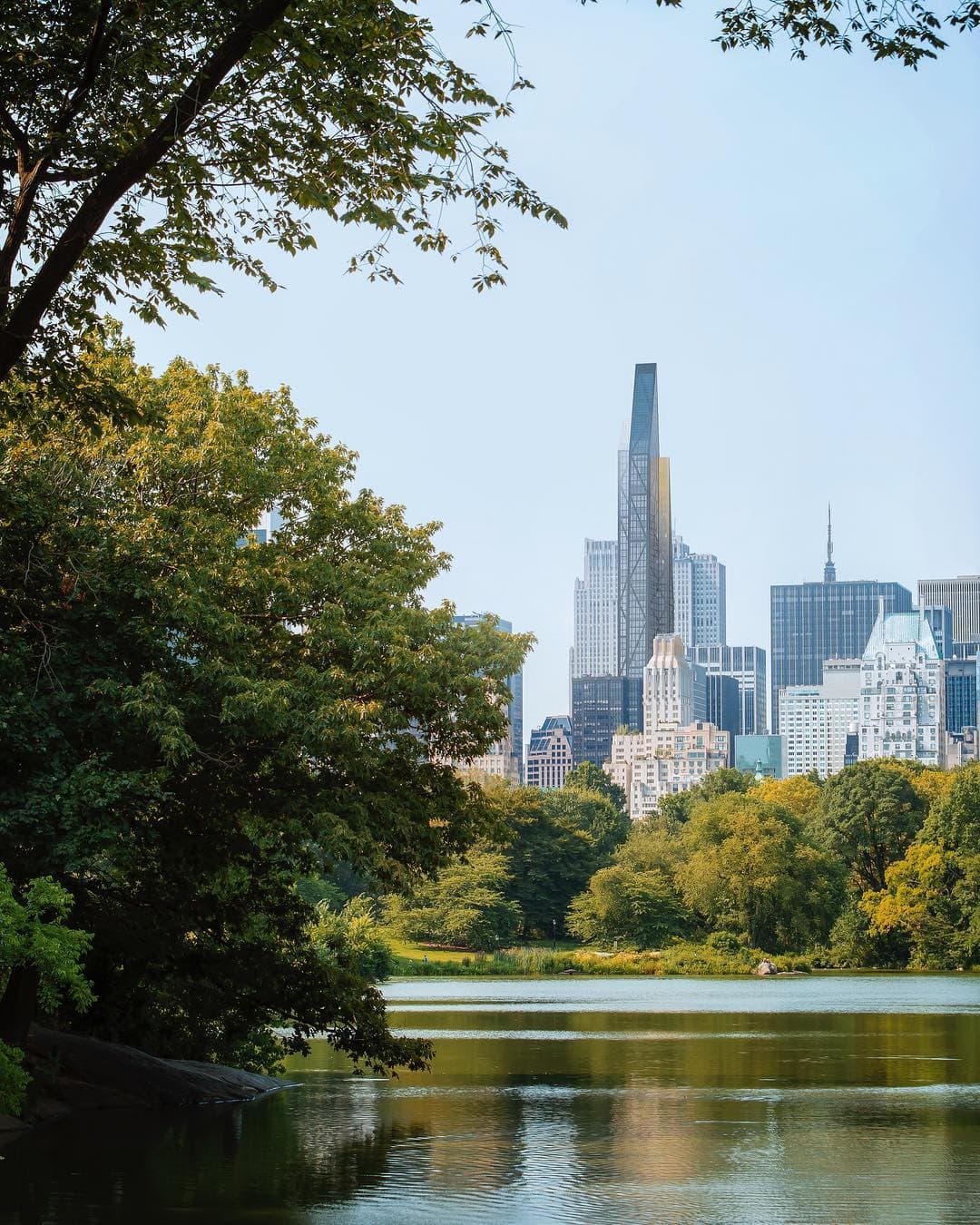 Once completed in late 2018, 53W53 will join 432 Park Avenue, 56 Leonard Street and the emerging 111 West 57th, as Manhattan’s latest super-skinny, luxury residential tower; the latest step in the ever-continuing evolution of the world’s most famous skyline.