THE Docklands Light Railway, known as DLR, is a driverless automated light metro system that was designed to rejuvenate the Docklands area of London.

A low-cost alternative to extending London’s underground network, the half train/half tram, has surpassed all expectations, rapidly expanding to become a vital part of the city’s transport infrastructure. Opening in 1987 with 11 trains servicing 15 stations, the DLR has since spread across east London and now has 145 trains connecting 45 stations. 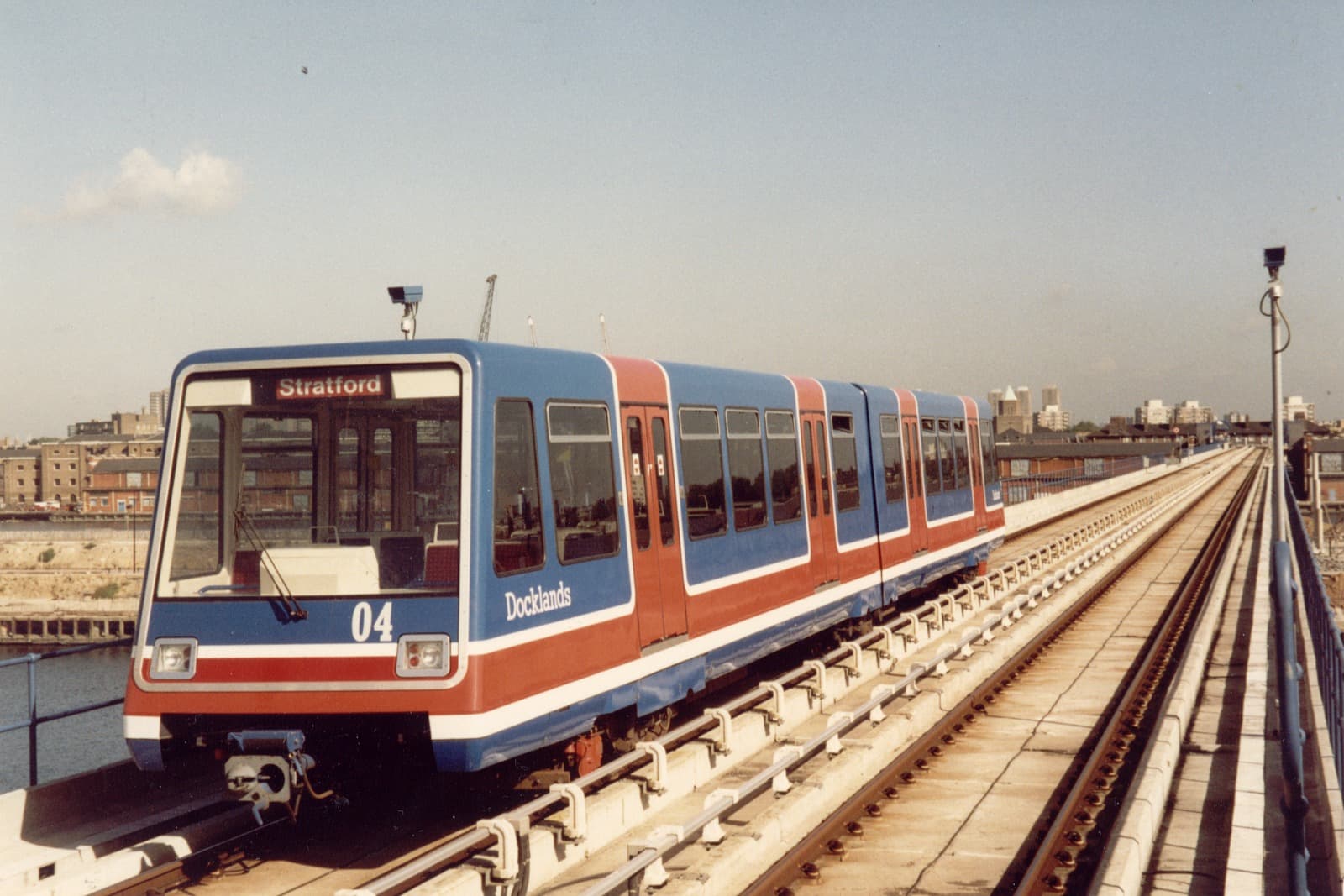 Above: The Docklands Light Railway, commonly known as the DLR, opened in 1987.

Its size makes the Docklands Light Railway larger than the entire metro systems of many major cities, including San Francisco, Rio de Janeiro and Yokohama. Passenger numbers have also risen dramatically over the past three decades. While 6.7M people travelled on the line in its first year of operation, an incredible 122M passengers used the DLR in 2016. 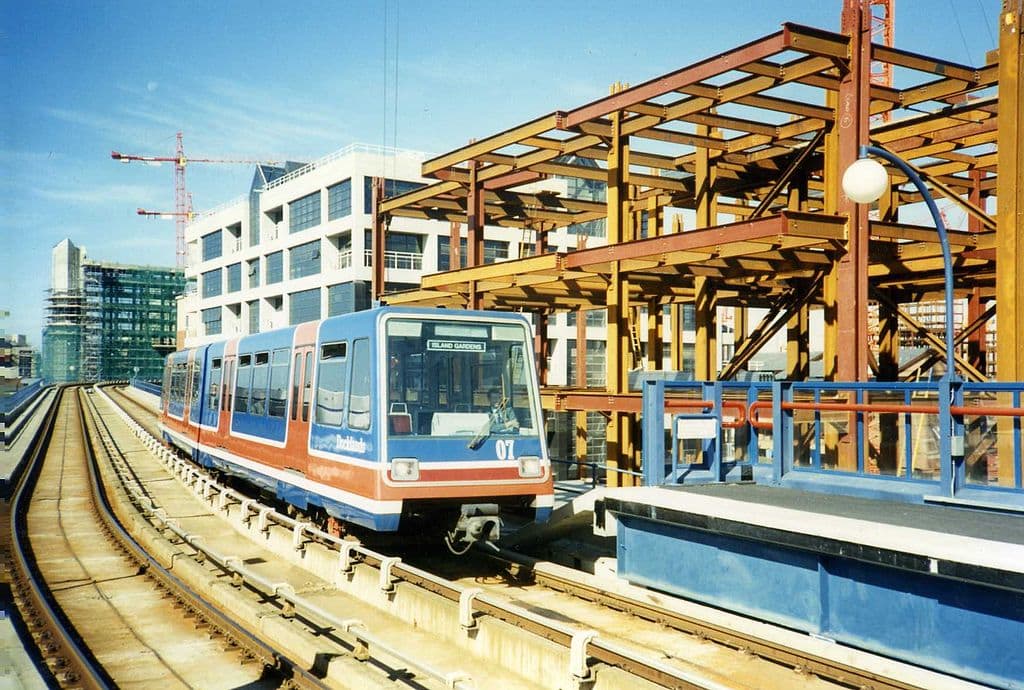 Above: The London Docklands Development Corporation wanted a futuristic look for the urban railway (image courtesy of Felix O).

In July 1981, the London Docklands Development Corporation (or LDDC) was created to coordinate the redevelopment, and one of its first actions was to investigate an affordable public transport system that would attract businesses to the area and kick-start housing development. The LDDC’s preference was for a highly visible, automated, driverless system with a futuristic look. The DLR was born.

The UK Government specified that the entire new railway had to be built within a £77M budget. With this in mind, a study was undertaken to identify the optimum routes and station positions that would rejuvenate the area without breaking the bank. Two routes were chosen. The first an east-west route that connected the Docklands and the City, with the second running north to south to link the Docklands to residential north east London. 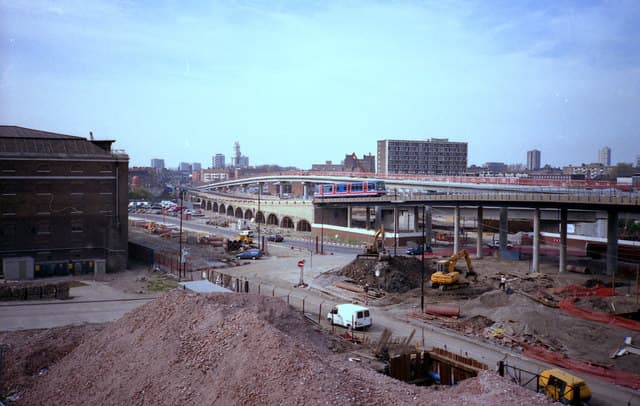 Above: Existing train infrastructure was utilised where possible to reduce costs.

To minimise costs, the DLR used existing infrastructure wherever possible. In total, eight miles of track was laid across disused train viaducts and existing surface railway formations, connected with new elevated concrete viaducts. The built stations were all above ground, generally unstaffed and united in design with a short half-cylindrical glazed blue canopy being a common feature on the platforms.

It was decided not to connect the DLR into the main tube network as it arrived in the city, as this would have required the construction of an expensive underground station. Instead, track near the disused Minories Station (adjacent to today’s Fenchurch Street Station) was repurposed as the city terminus of the line. 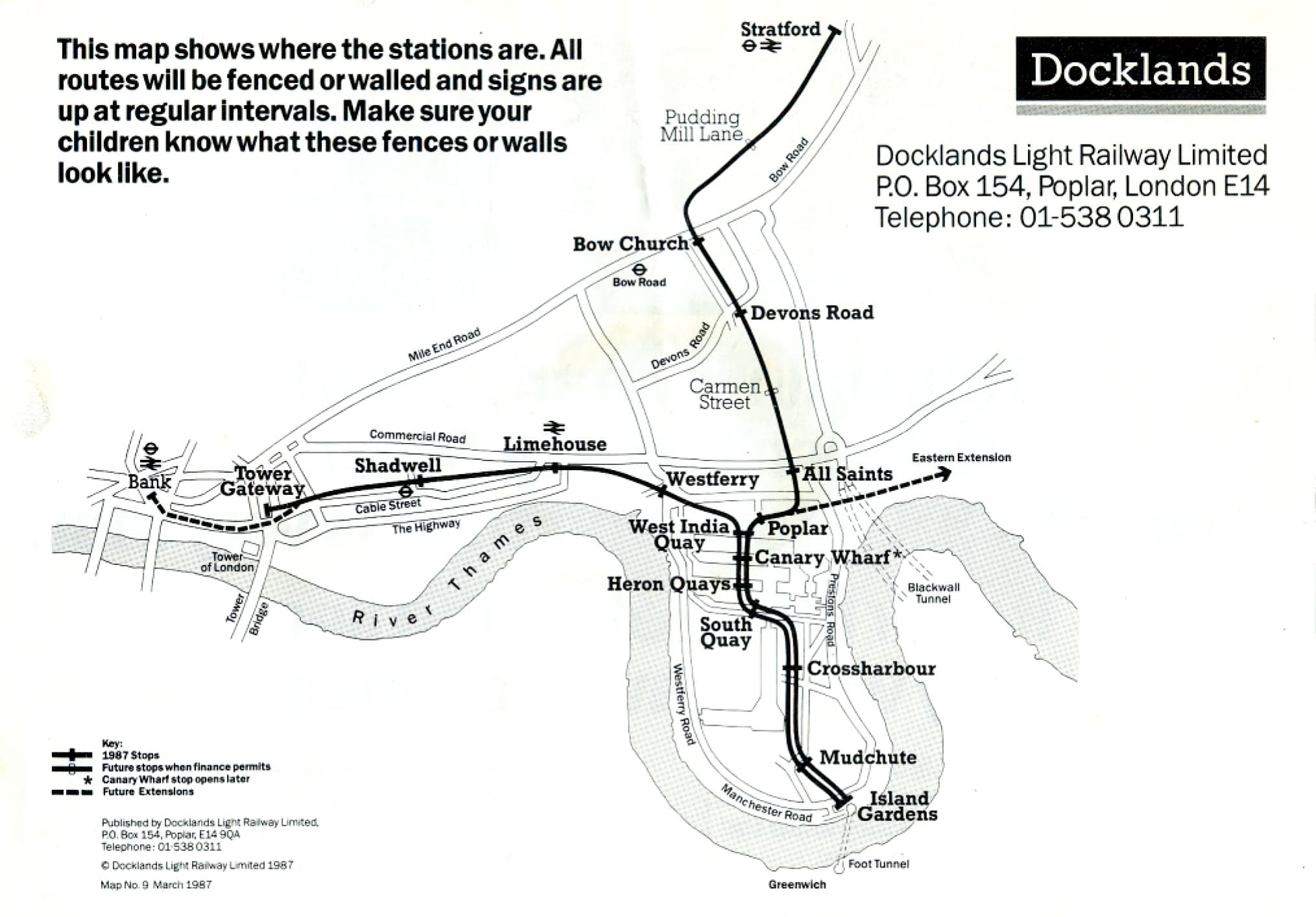 Above: The DLR opened with two lines, one running north-south the other east-west (image courtesy of TFL).

On the 31 August 1987, the Docklands Light Railway opened with two lines running from Tower Gateway to Island Gardens and from Stratford to Island Gardens. The railway of the future had arrived. The trains were fully automated with no driver, although a “Train Captain” on each train was responsible for checking tickets, making announcements and controlling the doors.

Due to the rapid development of the Docklands, the DLR proved much more popular than expected and expansion of the system began almost immediately.

Being separate from the Underground network was clearly a major flaw of the initial system. To resolve this issue, the line was extended to Bank Underground Station. This £149M connection into the heart of the City of London, through a 1.3km tunnel, opened in 1991. As the original trains did not meet safety and fire standards for operating in underground stations, the fleet was sold to the city of Essen in Germany where they were used on their tram system, and a new fleet installed. 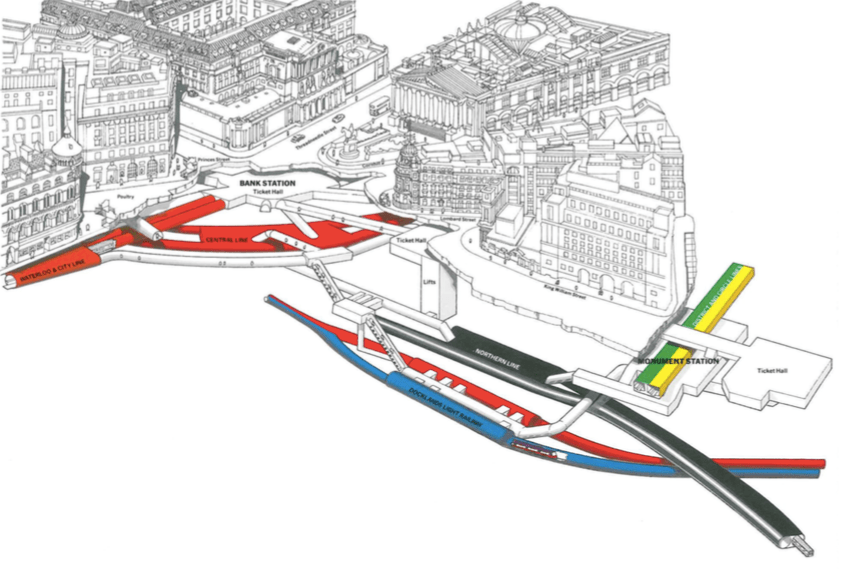 Above: In 1991 the DLR was extended to Bank Station connecting the light railway to the DLR.

Also in 1991, Canary Wharf station opened. Originally planned as a regular station, due to the growth of the office complex, it was redeveloped into the largest station on the network with six platforms serving three tracks under a large glazed roof. 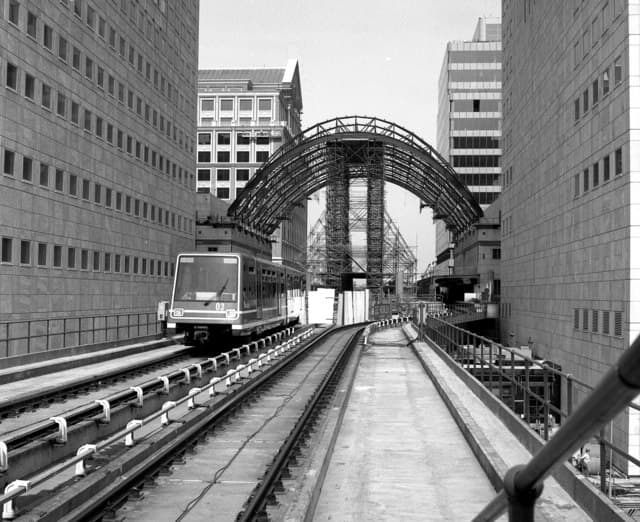 Above: Canary Wharf Station became the largest on the system when it opened in 1991

Following these developments, the line was further extended to the East of Docklands. Starting at the existing Poplar Station and terminating at Beckton, this extension added 11 stations to the Docklands Light Railway, substantially increasing the overall size of the system. When the eastern extension opened in March 1994 the DLR had almost doubled in size from 15 stations to 28 stations in just 7 years.

Early on in the development of the DLR, Lewisham Borough Council expressed an interest in bringing the DLR south of the river, which would of course mean tunneling under the River Thames. The Council commissioned a feasibility study to investigate the extension and in 1993 the UK Government approved a £200M project to connect-in Lewisham railway station via Greenwich. This was the first private finance initiative (PFI) on a railway in the UK. 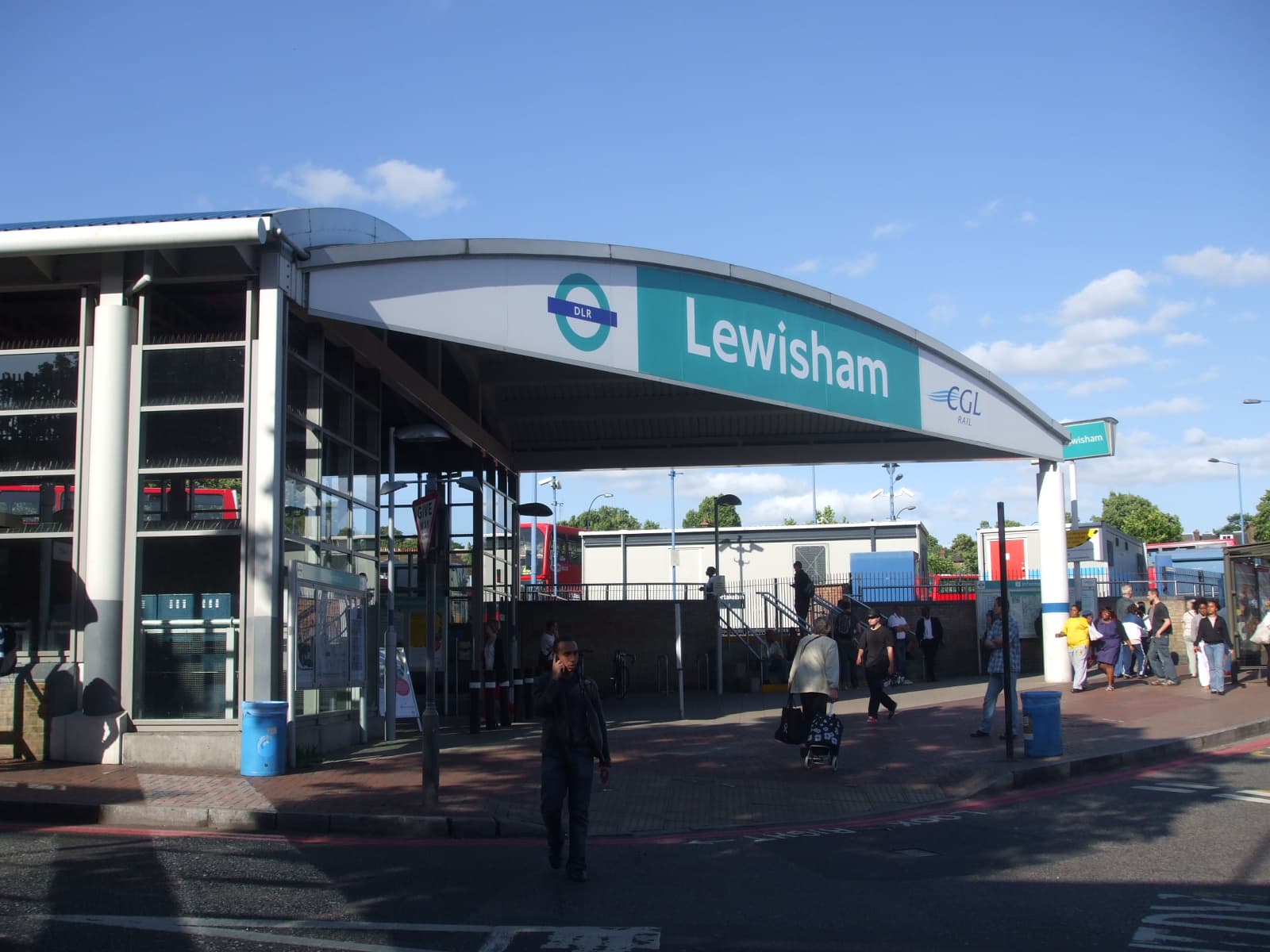 Above: The extension south of the river to Lewisham increased the number of stations on the system to 33 (image courtesy of Sunil060902_34).

To allow the DLR to pass under the Thames, its route had to be realigned. This meant the demolition and rebuilding of both Mudchute and Island Gardens stations, with Island Gardens being reconstructed completely underground. The 4.2km extension opened ahead of schedule on 3 December 1999, adding a further five stations to the network and taking the DLR south of the river for the first time.

By 2004 the line was serving almost 50 million passengers a year, but it was the continued growth of London City Airport that provided the impetus for the next extension. To connect the airport into London’s transport network, an eastward branch that followed the approximate route of the former Eastern Counties and Thames Junction Railway was created. This extension, which cost £140M, opened on the 2 December 2005. 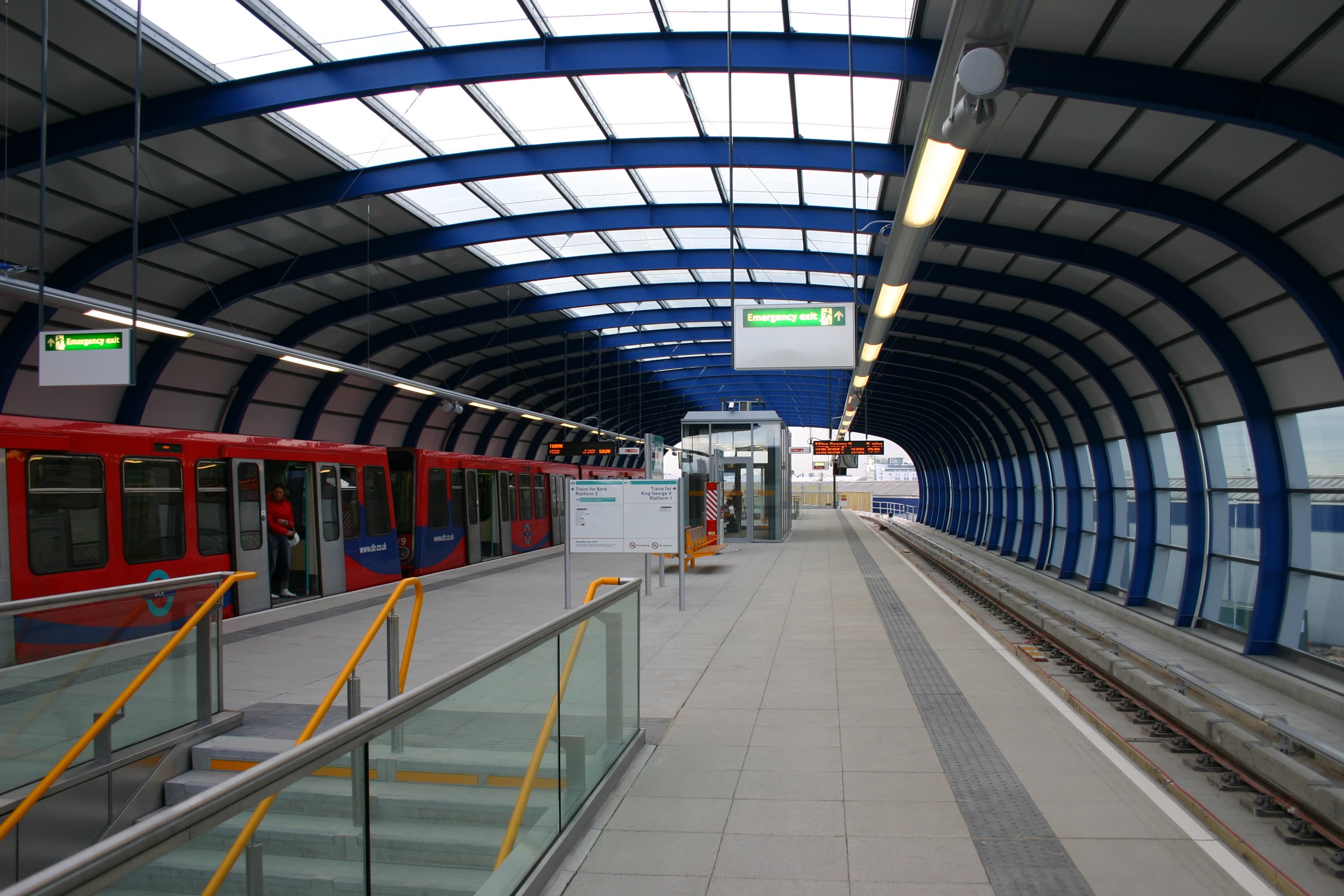 Above: The increasing size of London's City Airport prompted an extension of the line, which opened in 2009 (courtesy of Tom Page).

Two years later, work began on extending the route further under the Thames to Woolwich Arsenal station, connecting the DLR to the North Kent main line. Costing £180M, this extension opened in 2009.

The latest extension to the DLR was undertaken ahead of the London 2012 Olympics Games. A line was opened from Canning Town to Stratford connecting the Games’ two major venue clusters at the Olympic Park and Excel.

This extension added seven stations to the network bringing the total number of stations to 45 operating across six lines.

The Docklands Light Railway has been hugely successful, extending over so much of east London that the name now seems largely redundant. Over the past 30 years, the line has been steadily extended, and this doesn’t look set to stop anytime soon. There are several planned extensions to the network being discussed that will make the system even larger. 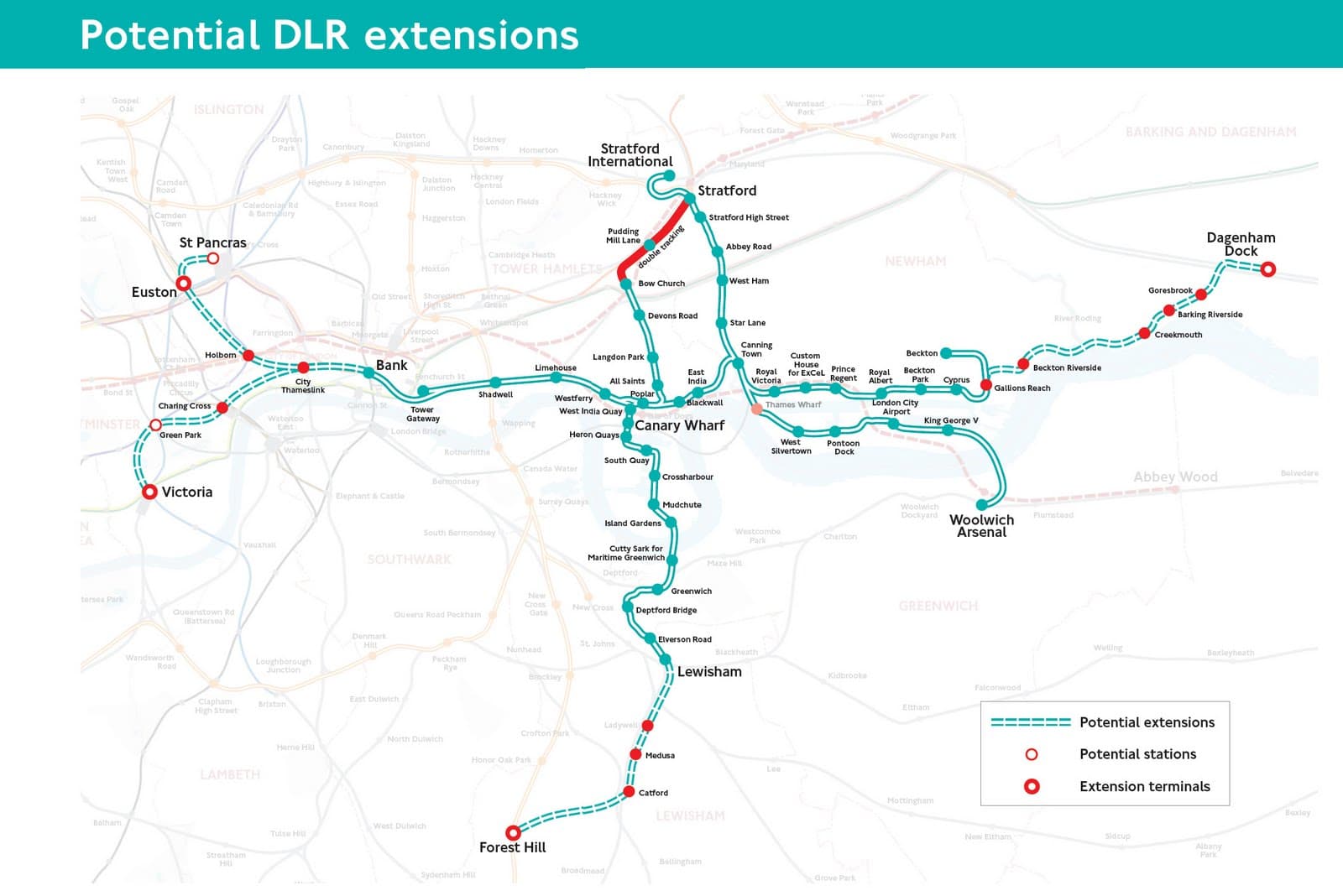 Above: The DLR is still growing, with extensions planned to the east, west and south of the existing system (image courtesy of TFL).

These include an extension south from Lewisham to Forest Hill; east to Dagenham Dock; across the river to Thamesmead and west to continue the line underground from Bank to Charing Cross and Victoria.

The DLR has grown into a truly urban railway and is a shining example for other cities to follow. Happy 30th Birthday!