How green will the 2022 Winter Olympics really be?

BEIJING is determined to make this Olympics one of the greenest yet.

It’s a line of thinking that has defined the Games since the debacle in Rio, where the host city and International Olympic Committee (IOC) drew intense criticism for overblown budgets and a perception of wastefulness.

Many of Rio’s venues were left abandoned merely months after the 2016 Games concluded, with the Aquatics pool drained and the Olympic village becoming a virtual ghost town.

The IOC has mandated that from 2030 every Olympics must be carbon-neutral or carbon-negative. There's also been a major push on selecting host cities that already have serious sporting infrastructure in place.

That's plain to see in the upcoming host cities: Paris will build just one new venue for 2024, Los Angeles already has several major stadiums, and 84 percent of the events for Brisbane will be hosted in either temporary venues or venues that already exist.

So how does this track for Beijing?

The Chinese capital will now hold a place in history as the first city to host both the Summer and Winter Olympics. It will also be the first Winter Olympics to rely entirely on artificial snow. 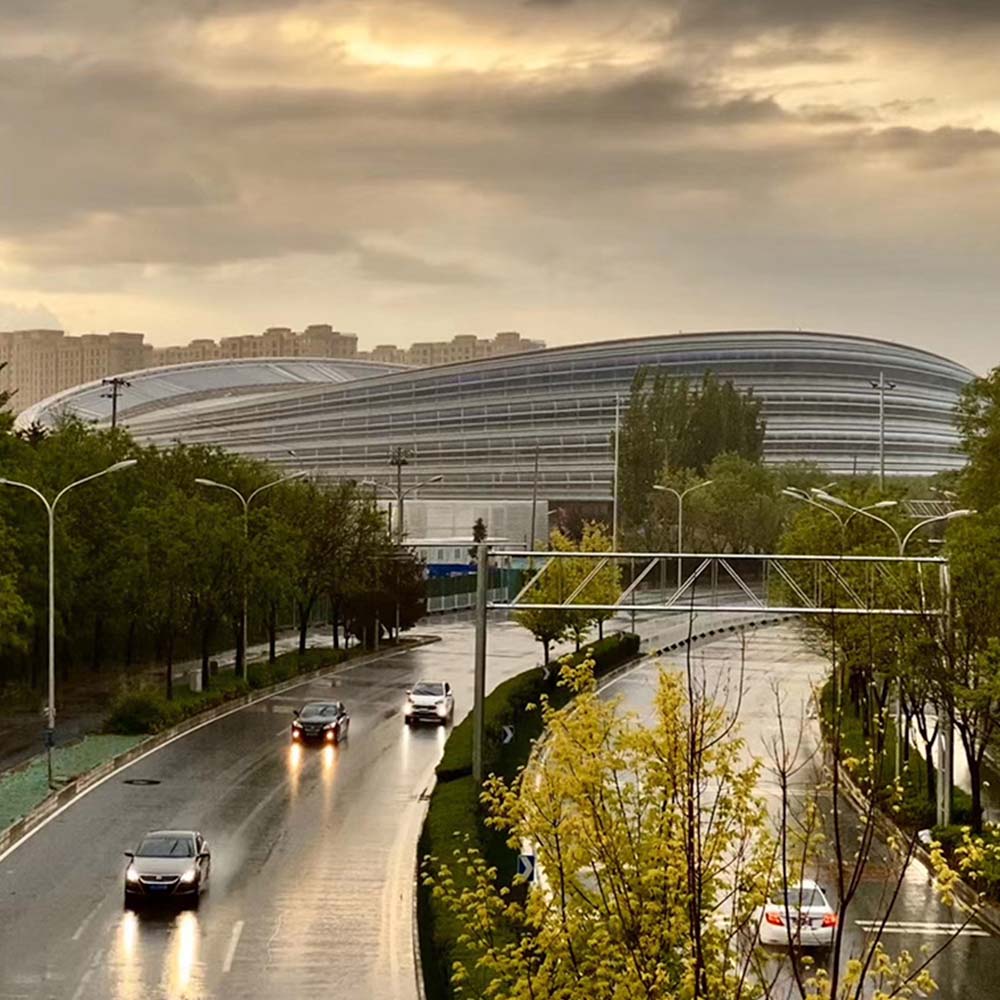 Above and Below: The new Winter Olympic stadium will sit next to Beijing's other past Olympic icons. Image courtesy of Populous. 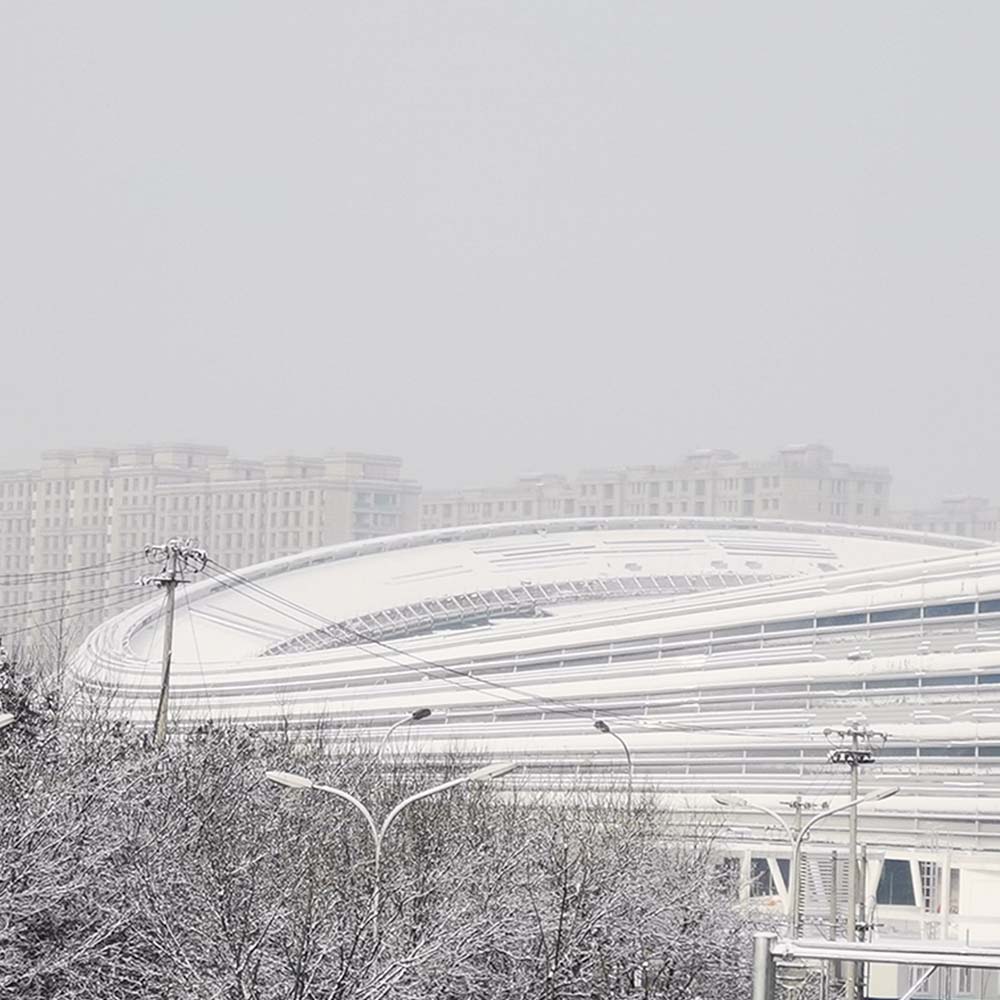 The city only receives a few days of snow annually on average, while Yanqing, the site of the ski centre, gets just 21 centimetres of snow a year.

To meet the needs of the Games, more than 1.2M cubic metres of snow will be produced artificially. It's a process that's incredibly resource-intensive and the quantity of snow required will use more than 222.8M litres of water - a tough ask for a region of the world that is already short on that resource.

As for indoor venues, Beijing has, like Paris, built just one new stadium for the Games. The only permanent venue purpose-built for 2022 is the majestic “Ice Ribbon”, a 12,000 seat capacity arena that will host the speed skating events.

Designed by Populous after winning an international competition, the building’s wispy form is meant to evoke the movement and speed of skaters as well as a traditional game played in old Beijing which involved a high-speed spinning "ice top". 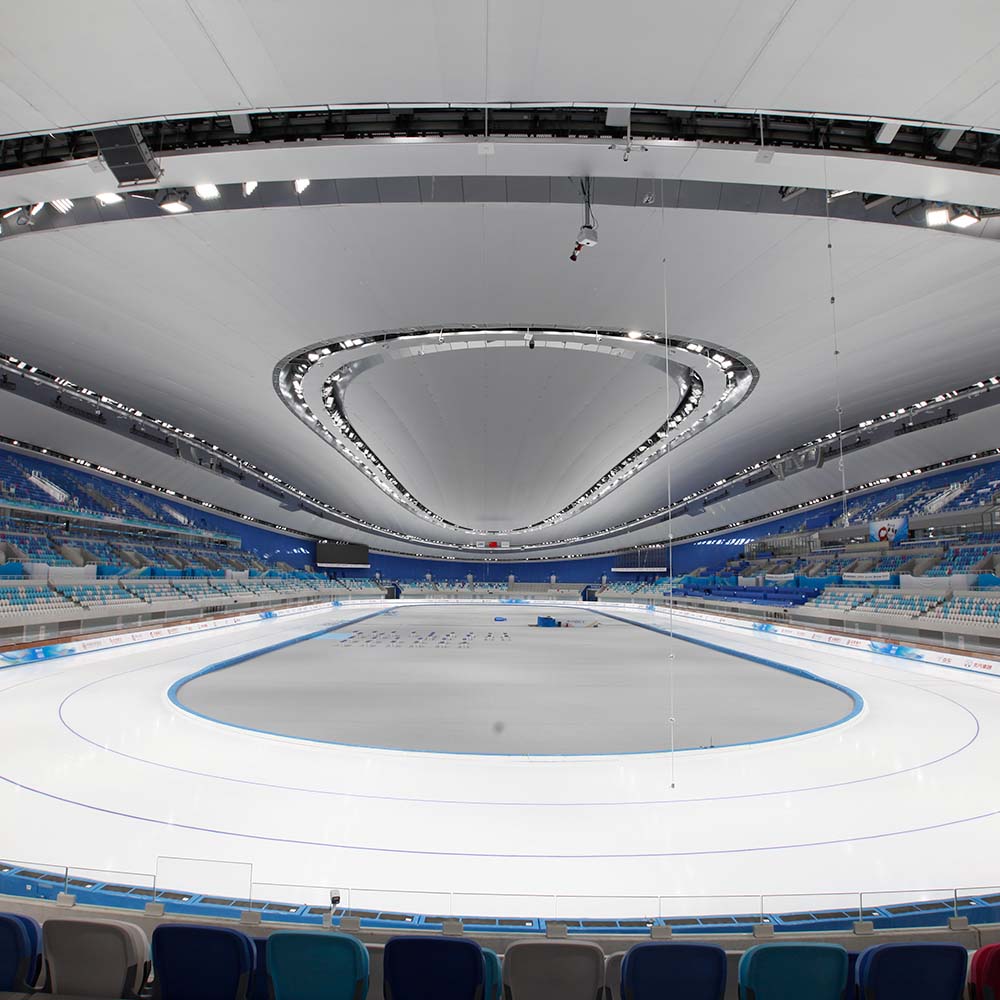 Above and Below: Inside the "Ice Ribbon". Image courtesy of Populous.

The stadium will sit comfortably next to the city’s other Olympic icons: the Bird’s Nest and the Water Cube. The former has since become a national symbol of pride, being transformed into a two-month long winter wonderland for Chinese tourists to celebrate the new Games.

Once the Olympics are over, the Ice Ribbon will become a new community hub for the city holding Winter festivals, public ice skating, ice hockey and other private events.

It's part of the Chinese Central Government’s Ice and Snow Sports Development Plan which aims to get 300M people involved in winter sports by 2025. It was also an important part of the country's bid for the Games and the IOC's "Agenda 2020" to ensure there were other real cost-benefits for Beijing in hosting.

While these Olympics are still not as "green" as they might be, compared to 2008, the 2022 Games are a model of restraint. That represents real, significant progress.