The landmark scheme – which was design-led by HLM Architects’ Glasgow studio – is currently being constructed by Brookfield Multiplex alongside Edinburgh’s Royal Infirmary. Once complete, it will provide some 1,800 rooms across 50,000 square metres of space (equivalent to 540,000 square feet).

Above: The vast healthcare facility was designed by HLM Architects (image courtesy of Soluis).

Designed to create an inclusive environment for both young and older patients with all levels of physical and cognitive ability, the five-storey structure includes a large atrium, shop and café, together with a spectacular skylight that links both of its entrances.

This is the single largest project ever undertaken by HLM Architects – one of the largest currently on site in Scotland for that matter – and its complexity led the project team to embrace UK Building Information Modelling (BIM) Level 2 from the outset. 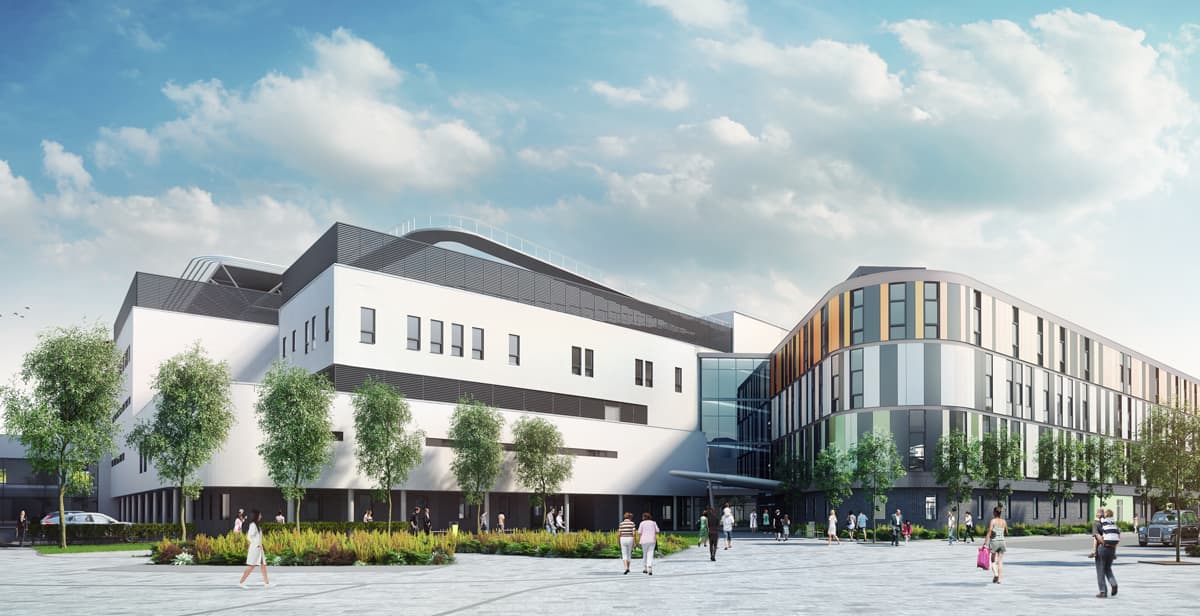 Above: BIM Level 2 was embraced from the outset (image courtesy of Soluis).

Lorraine Robertson, Associate Director at the practice, explained how her team approached the task: “The biggest project that we had actually delivered in BIM was Bradfield Secondary School, which had been delivered from the Glasgow office.

“Although [that] was much smaller, all we were doing was scaling-up. The model was broken down into smaller parts and all of the processes that you go through are the same,” she continued.

WORKING IN A BIM ENVIRONMENT

The project team adopted a “full BIM Level 2” working environment, steadily developing a ‘Project Information Model’ or PIM throughout the design and construction process. That PIM consisted of structured graphical and non-graphical information, held in a Common Data Environment (or CDE); a shared online space that all appropriate parties could access.

HLM Architects authored their graphical information models in ARCHICAD, a product the practice has delivered successful schemes with for many years.

The project’s information model was developed iteratively over time. HLM’s Model Manager would receive graphical information model files from across the design team and supply chain on a bi-weekly basis, then combine or ‘federate’ them into one model for analysis in design co-ordination meetings. 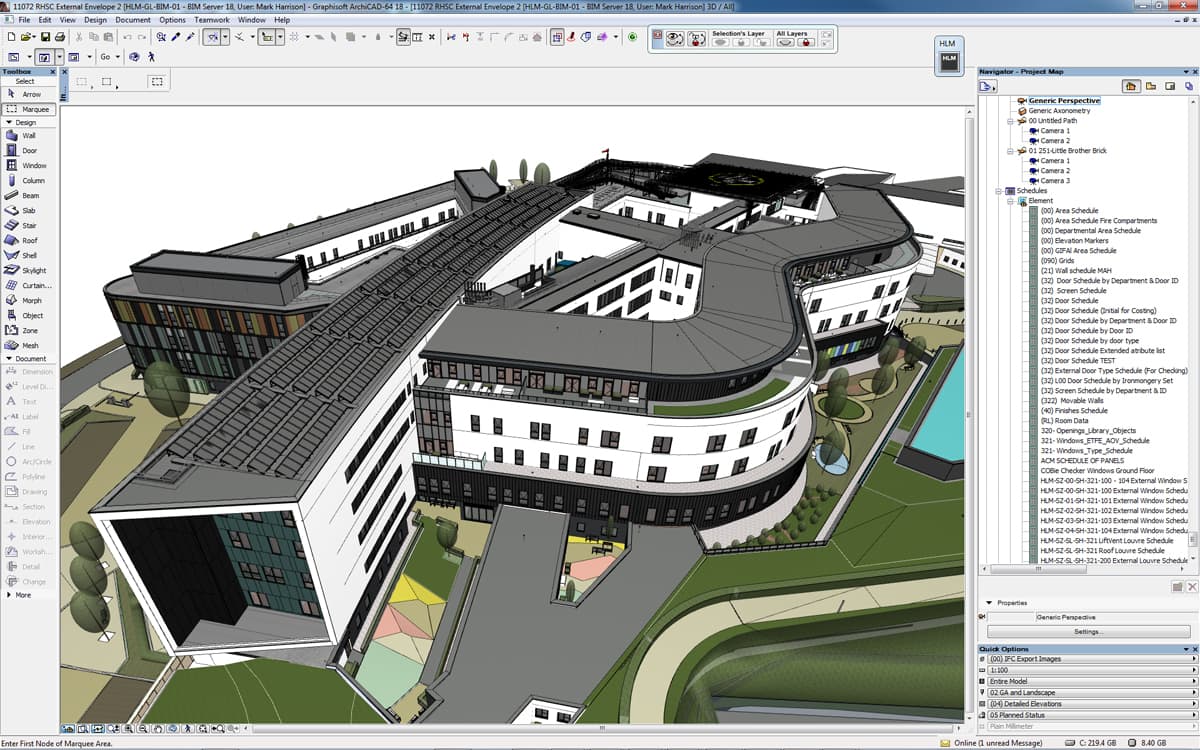 Mark Harrison, BIM Co-ordinator and Architectural Technologist at HLM Architects, explained how the process worked: “All of our drawings are produced in the 3D model, in ARCHICAD. The majority [of the data] is then exported as PDFs or Excel spreadsheets which are uploaded to the CDE.”

The use of PDF or Microsoft Excel format ensured information was accessible to all tiers of the supply chain, Harrison explained.

Healthcare schemes are always complex, often with advanced mechanical and electrical installations and significant amounts of equipment. It is perhaps no surprise that a hospital of this scale generated a very data heavy project information model.

To overcome this, the team rarely loaded-up the full federated model. Instead they broke it down into manageable segments, only looking at the specific information they needed to at any one time, says Harrison. 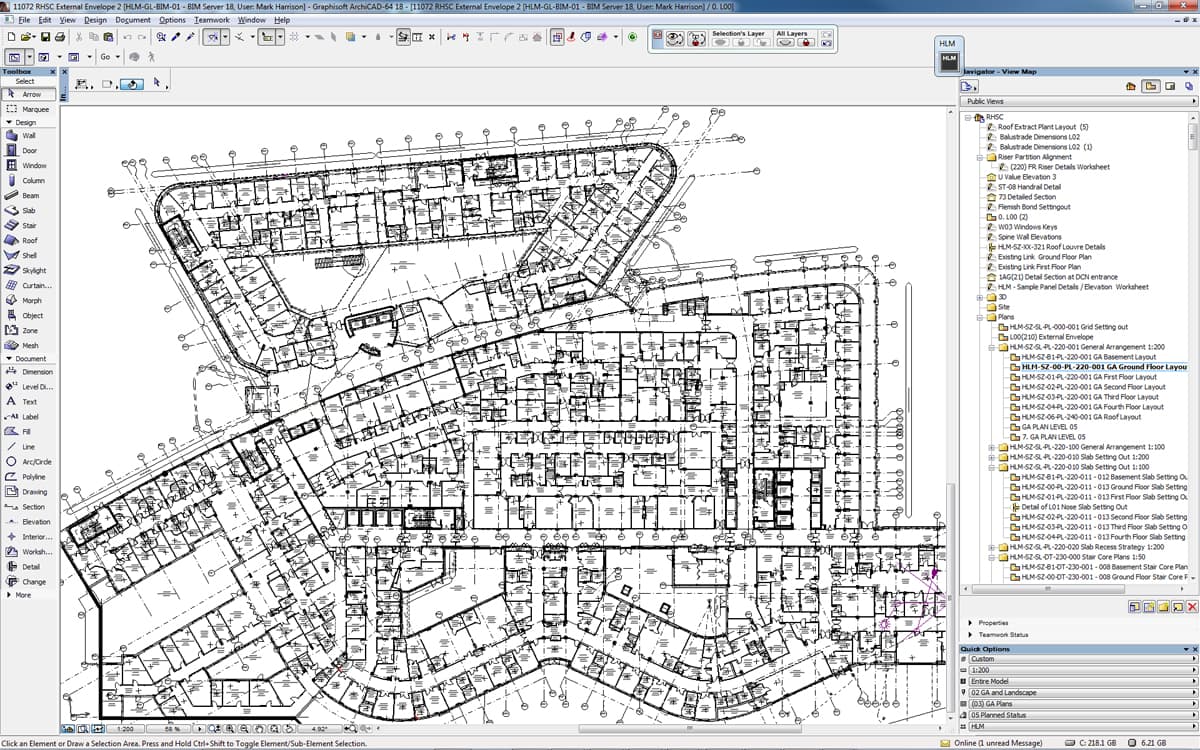 Above: A hospital of this scale generated a very data heavy project information model (image courtesy of HLM Architects).

“Our external envelope model alone is 12GB, and the internal upper and lower models are four to five GB each. So if you’re working with the internals team they don’t necessary need all of the room loading equipment in there or the landscaping information. So we hotlink in the various parts of the model to suit their needs and what they are working on.”

Developing the detailed design in a BIM environment has seemingly generated a robust information model that is standing-up to scrutiny on site.

“Our external envelope model alone is 12GB, and the internal upper and lower models are four to five GB each”

“When you were working in 2D environments and you were asked to produce drawings, you would tend to do them through easier parts of the building. You can’t do that with BIM” says Harrison. “Everything needs to be worked through. There’s less corrective work to do when the job is on site. The building has been built in the model first of all then thoroughly examined before they strike a blow on site.”

Projects of this magnitude of course come with long gestation periods. In the case of the Royal Hospital for Sick Children and Department of Clinical Neurosciences, that period stretched over a fairly critical time for UK BIM process development and one in which technologies moved on significantly.

HLM Architects took the decision to evolve their standards and software platforms with the project.

“We’re told that once you start a project you’re meant to stay at that particular version of ARCHICAD as you’re going through” says Robertson. “Now on a project the size of this you can’t really afford to do that as everyone needs to develop with the software.”

The scheme originally came into HLM’s practice in 2011. Had they stayed on the version of ARCHICAD they were using at the time, the practice would now have a significant number of employees using ARCHICAD 15, while others had progressed to the later releases.

“We bit the bullet and made sure that the staff continued to learn and grow with the product,” continues Robinson. 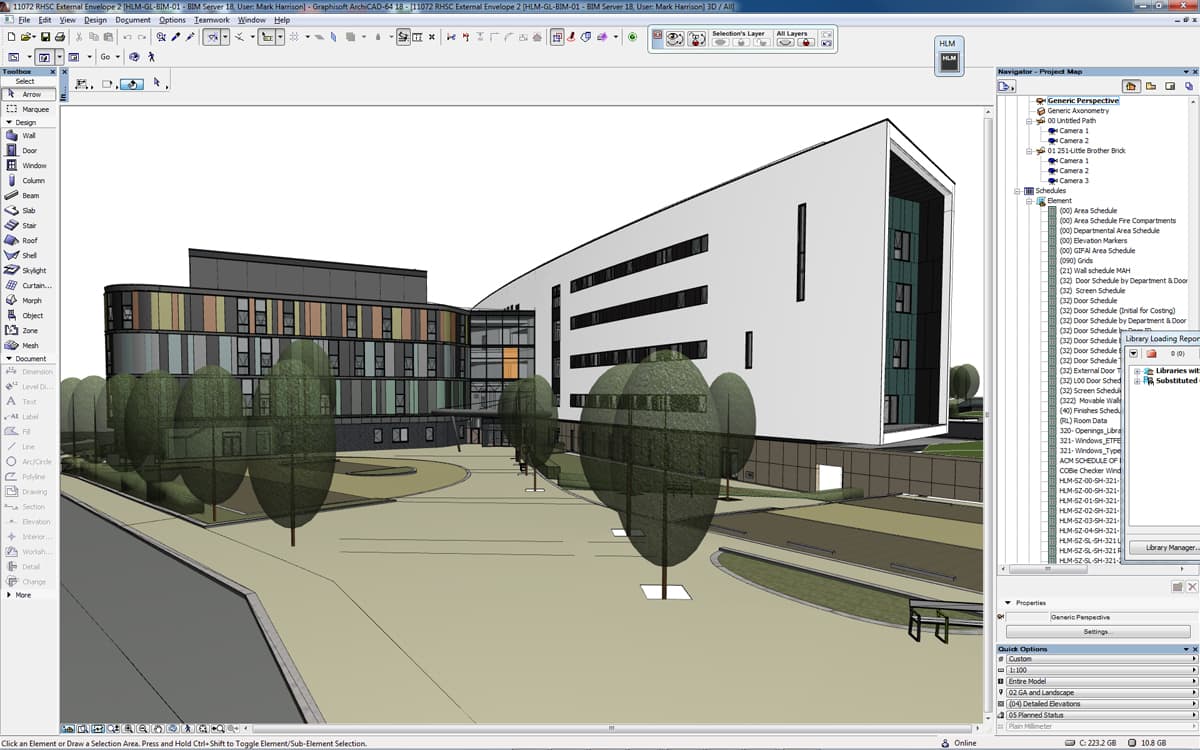 Above: Regularly upgrading software had benefits for interoperability (image courtesy of HLM Architects).

Regularly upgrading the software also had benefits for interoperability adds Paul Tunstall, Associate at HLM Architects: “The IFC technology between ARCHICAD and other platforms wasn’t as good as it is now, which was another reason for upgrading almost yearly.”

HLM Architects cited ARCHICAD’s team-working capability as a key benefit over other platforms, particularly on a scheme of this nature where they regularly communicated and exchanged information between their UK offices.

Faced with such a complex and high-profile project, the team firmly believe that working in a BIM environment improved collaboration, reduced risk and increased the rate of design iteration. 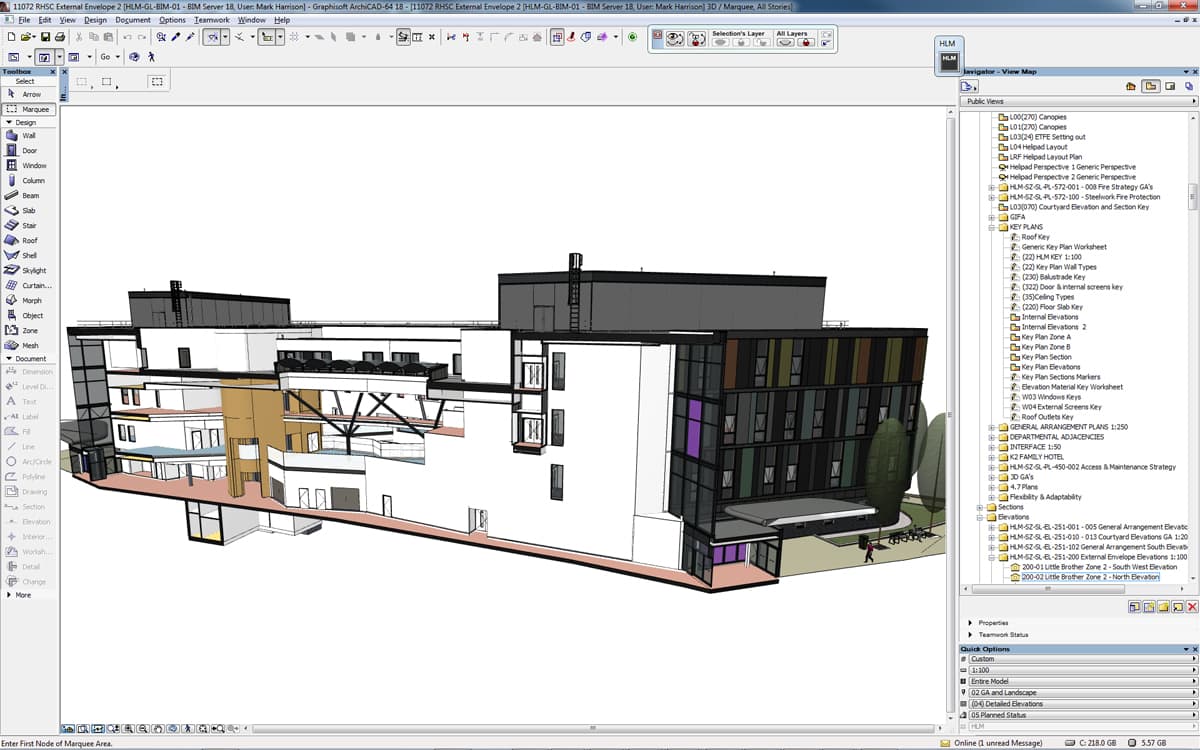 Above: Working in a BIM environment improved collaboration, reduced risk and increased the rate of design iteration (image courtesy of HLM Architects).

Tunstall explained how this experience has already benefitted the practice on subsequent schemes: “What we’ve learnt from this project we have been able to pass onto our other projects and teams in our other offices.

“We’ve been through that pain so they don’t have to” he smiles.

Robertson concludes: “It’s meant a huge team of people in the office all working really closely together to deliver a project that I think we will all be very proud of.”

You can learn more about the Royal Hospital for Sick Children and Department of Clinical Neurosciences scheme here.

For more on ARCHICAD visit: GRAPHISOFT.com/ARCHICAD

Images courtesy of HLM Architects and Soluis. Footage courtesy of NHS Lothian. This documentary contains product placement by GRAPHISOFT. We welcome you sharing our content to inspire others, but please be nice and play by our rules.